About Battle of Barnet

The Battle of Barnet took place on the 14th of April 1471 and was one of the most decisive and bloody encounters of the Wars of the Roses.

In 1470 an alliance between Edward IV’s former ally, the Earl of Warwick, and his Lancastrian enemies had forced the Yorkist leader to flee the country. Having been in exile in Holland and Burgundy for six months, he landed back in Yorkshire, proclaiming that he only wished to reclaim his dukedom.

However, he promptly marched south and took London, where his queen showed him his newborn son, also named Edward. He then marched north to Barnet to confront Warwick who was now fighting alongside the Lancastrian Queen Margaret (and had married his second daughter to Margaret’s son, the Lancastrian Prince of Wales).

Warwick, marching south from the midlands, took up position about a mile north of Barnet. Edward, arriving at dusk, took up his position close by. Due to a thick mist, the two armies were not directly opposite each other, and they overlapped.

The earl of Oxford, commanding one wing of the Lancastrian army, won an early victory and his men made it all the way in to the town. He then turned and led his troops back to the battle, where Lancastrian troops, mistaking his emblem for that of Edward, engaged him in battle. With cries of ‘treason, treason’, Oxford fled the field, taking his troops with him. It was the decisive moment and the fear and confusion saw the Lancastrian forces disintegrate. Both Warwick and his brother lost their lives at Barnet, a huge blow to the Lancastrian cause. Edward was therefore the victor of the battle of Barnet, and thus regained the throne.

There is little left of the battlefield now, but there is a monument on the A1000 road, which gives as good a view as any of the battlefield, which is now agricultural land, with little in the way of public footpaths. Like many of these medieval battlefields, the actual site is disputed, and is always under review. 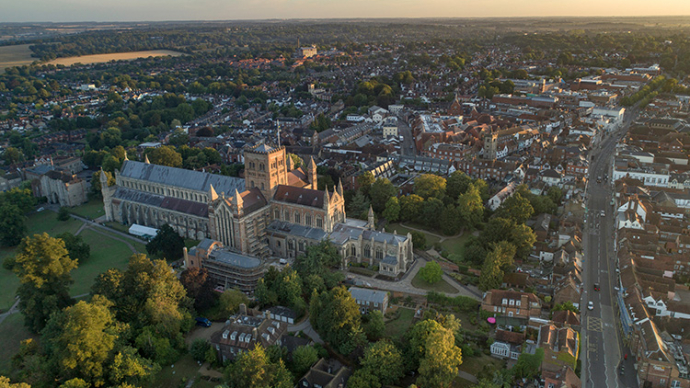 St Albans is a wonderful market town and the site of the execution of Britain’s first Christian martyr (209AD).

Blore Heath was the site of the second battle of what became known as the Wars of the Roses.

Sandal Castle was the site of an important battle in the Wars of the Roses.

The Battle of Bosworth Field of 1485 resulted in the death of King Richard III and ascension of Henry VII to the throne.

Just as empires rise and fall so do entry fees and opening hours! While we work as hard as we can to ensure the information provided here about Battle of Barnet is as accurate as possible, the changing nature of certain elements mean we can't absolutely guarantee that these details won't become a thing of the past. If you know of any information on this page that needs updating you can add a comment above or e-mail us.