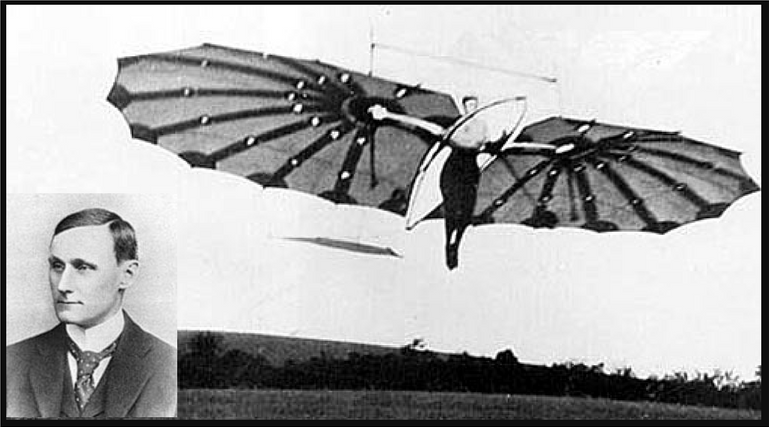 On December 17th, 1903, Wilbur and Orville Wright made the first flight in a powered aircraft. A short distance outside Kitty Hawk, South Carolina, the brothers made four brief flights in their machine, called simply the Flyer. The longest lasted just 59 seconds but nevertheless earned the Wrights a seat at the forefront of aviation history.

Yet, as ever, it could all have been so different.

In 1899, a British aviation partnership was en route to achieving powered flight – four years before the feted American brothers. But tragedy intervened.

Percy Sinclair Pilcher was born in Bath in 1866. He joined the Royal Navy as a Midshipman in July 1880, and retired as Lieutenant in 1886. He was apprenticed to Elders Shipyard in Glasgow and in 1890 became assistant to the head of Naval Architecture at Glasgow University.  But his passion was for flying.

From 1894 he devoted his spare time to the design and construction of ‘soaring machines’ or gliders. He produced a series of designs: The Bat; The Beetle; and The Gull. Based in Kersland Street, Glasgow, Pilcher was assisted by naval architecture students, and by his sister Ella. The gliders were constructed of calico, sewn on the dining room table to bamboo ribs, all held together with steel wires and twine knots. They were operated in a similar way to modern hang gliders; Pilcher was suspended beneath, resting his forearms on the frame and hanging on to two vertical bars. He manoeuvred the aircraft using his own body weight, which required him to maintain a high level of physical fitness.

In 1897, while Pilcher was working on his fourth glider design, The Hawk, he was introduced to the gifted engineer Walter Gordon Wilson. With his advanced knowledge of internal combustion engines, Pilcher saw in Wilson a valuable partner in his ultimate goal of achieving powered flight. They went into partnership, forming Wilson-Pilcher Ltd in 1897, and took a workshop in Clerkenwell, London.

Pilcher continued work on a new design for a triplane, intended to be the first mechanically-propelled flying machine. Wilson set about designing an engine to power it.

The patent for the aircraft, filed in 1896, shows the propeller mounted behind the wings in a “pusher” configuration. The propeller itself, in a display of forethought, is made from laminated wood, which Pilcher observed to be stronger and less prone to warping. By the summer of 1899, the plane was almost complete and being readied for testing.  In August, Wilson’s two-cylinder flat twin engine was tested for the first time in the workshop.

On 30th September, 1899, a demonstration was held at Stanford Hall in Leicestershire. The attendees were to witness a flight by The Hawk, and to inspect the new aircraft. Wilson was absent. The exact reason for his absence is unknown but was possibly due to a disagreement with Pilcher.

The Hawk’s wet calico and twine shrank and distorted, exerting extra pressure on the bamboo ribs. But Pilcher didn’t want to disappoint.

The demonstration was scheduled for after lunch. But over the course of the morning, heavy rain soaked both aircraft. The Hawk’s wet calico and twine shrank and distorted, exerting extra pressure on the bamboo ribs. But Pilcher didn’t want to disappoint. After an aborted first flight, his second attempt took him soaring to 30 feet. But the frame couldn’t stand the strain. The tail collapsed and Pilcher plummeted to the ground. He never regained consciousness and died 36 hours later.

The partnership of Pilcher and Wilson had, in September 1899, both an aircraft and an engine close to completion. They may well have been just months from attempting powered flight.

Following the accident, Wilson shifted his focus to automobiles. With the outbreak of the First World War, he became involved with armoured cars and later played a vital role in the development of Britain’s first tank. Mortified at having been absent at the death of his friend, he never spoke of his work with Pilcher again.

A replica of the The Hawk can be seen at the National Museum of Scotland.