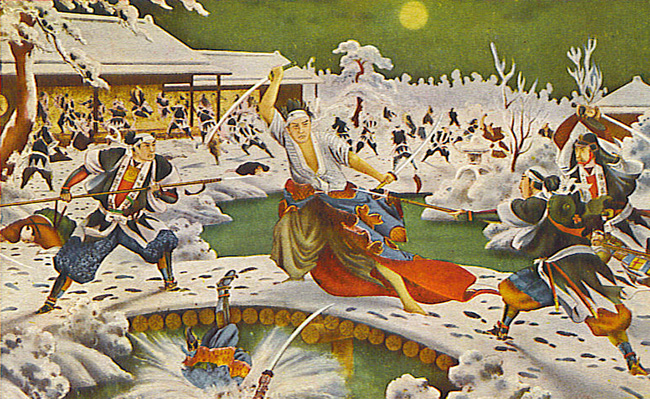 The story of Forty-seven Ronin is one of the most famous and well-told tales in Japan.

It begins in 1701 and tells of a feud between Lord Asano Naganori, the leader of a group of samurai warriors, and Kira Yoshinaka, a court officer.

In 1701 Kira was assigned the task of teaching and tutoring Lord Asano Naganori in matters of court etiquette and protocol. But when Asano did not give Kira the lavish gifts he was expecting – to show his “appreciation and respect” – he became very angry with the Lord.

Different versions of the story describe Kira in different ways – but each suggest that he was probably a greedy and arrogant man who attempted to bribe Lord Asano.

Unable to accept what he saw as a total lack of respect, Kira became increasingly insulting towards Asano and treated him harshly, taking every opportunity to try to bring him down.

But finally Asano could take it no more and on 14 March he attacked Kira with a dagger, trying to kill him in the Matsu no Ōrōka – or ‘Great Corridor of Pines’ – at Edo Castle. The attack was unsuccessful; rather than inflict a severe blow, Asano merely managed to wound Kira in the face before the pair were separated.

Upon hearing of the assault, Shogun Tsunayoshi ordered Lord Asano to commit seppuku (ritual suicide), while Kira received no punishment at all.

Now that Lord Asano was dead, his samurai retainers were left without a leader, becoming what is called ‘ronin’ (leaderless). According to the Code of the Samurai, ‘ronin’ were supposed to immediately commit ritual suicide upon the death of their master – and if they did not, they were looked upon with great shame.

But 47 of the ronin decided to live on in order to take revenge for Asano’s death by killing Kira. After two years of meticulous planning, they stormed into Kira’s mansion in Edo – when they believed him to be off his guard – and struck him down with swords and bows.

Having killed their enemy, they cut off his head and laid it inside Lord Asano’s tomb in his honour.

After they killed Kira, the ronin turned themselves in and committed seppuku. All 47 ronin died by ritual suicide.

Why is this story so significant to the Japanese people?

Ultimately it has come to symbolise “the loyalty, sacrifice, persistence, and honour that all good people should preserve in their daily lives.”

Although the story is true, it has become known as ‘Japan’s National Legend’ because of the countless number of books, plays, dramas and films which have been released across Japan and are based in some way on the story – and these dramatisations are known by the Japanese people as ‘Chūshingura.’

There are at least 6 films based on the story of Forty-seven Ronin. Between 1997 and 2007 no less than 10 TV series were produced and in 2013 a Hollywood film starring Keanu Reeves was released.

So, the story of Forty-seven Ronin tells of the ultimate loyalty and sacrifice that humans may be prepared to make, and continues to captivate audiences today.