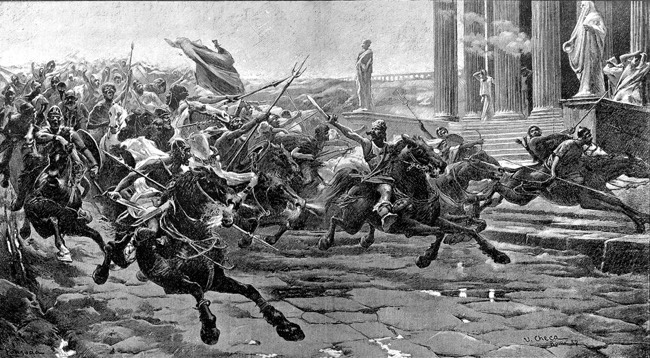 In the late fourth century there were many groups of ‘barbarians’, as they were known to the Romans, harassing Roman forces inside or on the borders of the Empire. Some, like the Goths, were mostly tolerated and their territories were even partially within the nominal bounds of the Roman empire.

Others were more hostile to Roman rule, and these outsiders had been encroaching on the borders east and west for generations, weakening Roman control in many places.

This ended briefly, as the military emperor Diocletian rose to power in 284.

He re-established firm borders and doubled the size of the army to repel the encroaching barbarous peoples. His efforts were largely successful and the Empire was stabilised for several generations, until the arrival of the Huns.

An empire under siege

From sources describing the Huns and their tactics in warfare, historians have inferred that they were nomadic peoples from either the Turkic or Mongolian tribes of the steppe.

The tribes of the steppe rarely found a unifying catalyst, but when one arose, their military skill was great enough to challenge any who opposed them.

They were almost all mounted and fought from horseback with bow and spear, a common attribute of steppe warfare. They threw the western world into turmoil, much as their ancestors, the Mongols under Genghis Khan would do centuries later.

The assault of the barbarians caused such an upheaval within the Roman empire that the resulting age became known as the Age of Migration, a time of great movement and change across much of the vast Empire and the areas beyond its borders.

The Hunnic empire was vast, but short lived.

The Goths came from the lands surrounding what is today north-western Europe and settled large areas of Rome’s northern territories. However, they were pushed from their new lands by the arrival of the Huns.

The Goths, or various branches of the people, struck out for different parts of the Empire. It was they who sacked Rome in 410 AD.

An unthinkable notion just a few generations prior, but Rome was a shadow of its former self at this time, the capital of the Empire had been moved east to Constantine’s new seat in his city of Constantinople.

The Germanic tribes of the Franks and the Vandals were also attacked by the Huns and so turned their attention to other parts. The Franks headed west and south, settling much of what is today modern France.

The Vandals also headed west and south, crossing the Strait of Gibraltar and capturing the north African cities of Hippo and Carthage. By 477 they also controlled the Balearic Islands, Sicily, Corsica and Sardinia.

The Huns themselves had conquered huge swathes of land to the east, between their homes of the great steppe and the area in Europe they now set up home. The Hunnic empire was vast, but short lived.

The tribes of the steppe rarely found a unifying catalyst, but when one arose, their military skill was great enough to challenge any who opposed them.

In this case, that catalyst was the infamous Attila. Under his leadership the united tribes conquered an enormous part of the known world and upset the great Roman Empire, setting in motion events that would lead to its eventual demise.

The Huns splintered and disbanded after the death of Attila in 453, the next time the people of the steppe united the largest continuous land empire, twice the size of the Roman empire at its peak, would be forged under the great Genghis Khan.