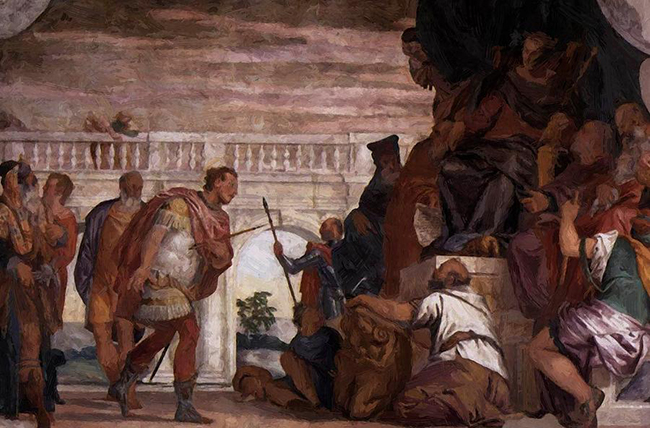 Diocletian’s story reads like a best selling historical novel: rags to Roman Emperor in under forty years. He was born in 245 into a family of former slaves; his mother and father were freed before his birth, but had previously been slaves to a Roman senator, Anulius.

From rags to Roman emperor

Diocletian joined the army at a young age and made his name through martial prowess. A military career was the ultimate meritocratic path in ancient Rome. Even the lowliest child of a slave could raise himself up through the ranks to glory and fortune. During his career Diocletian gained the illustrious command of the guards of the palace and was given the honours of consulship.

His social standing, coupled with great achievements during the Persian War, were enough for Diocletian’s peers to bestow upon him the Imperial throne after the death of his predecessor, Numerian.

An Empire in chaos

When Diocletian ascended to the throne in 284 he was given the burden of an empire in decay. Rome’s borders were undefined and constantly assailed from east and west from Sassanid and Germanic tribes, respectively. Economic issues plagued the great civilisation too. Inflation caused by poor quality silver in coinage and slowing economies in both commerce and farming gave rise to numerous other civil issues and hindered military operations further.

The Emperor took several steps to rejuvenate the ailing Empire:

1. To begin with Diocletian made his friend and former brother in arms, Maximian, ruler of much of the eastern part of the Empire and was instructed to quell the troubles that faced its outer borders. Diocletian took the West and turned his attention to the troublesome Germanic peoples.

2. Both Diocletian and Maximan adopted a successor each to maintain the continuity of their reforms upon succession. The men they chose were trusted generals from the army who they had previously served with, Galerius and Constantius. The latter was the father of future Emperor Constantine. This system of governance was named the Tetrarchate.

3. To defend and cement the borders Diocletian doubled the size of the army. He issued a series of conscriptions, including a law which decreed that all sons of soldiers should follow their fathers into service. This created a ready supply of soldiers from all over the Empire and created a martial caste within Roman society.

4. To re-establish order of governance across the many far-flung and often autonomously run provinces in the Empire, a new administrative system was implemented.

The 50 provinces previously established were split into 100, which were then grouped into 13 separate dioceses, each governed by a local official who reported directly to a centrally appointed bureaucracy in Rome. This created a direct link between Rome and the outlying provinces, forging order and continuity between all provinces under the yolk of the Emperor.

5. To remedy the economic situation caused by the debasement of silver in the currency and sluggish commerce across the Empire, Diocletian issued a new currency which consisted of a new gold coin of decent purity and a heavier silver one.

He also instituted a new system of tax which would enable government to monitor revenues across each economical sector and subsequently create a state budget solely based on tax revenue.