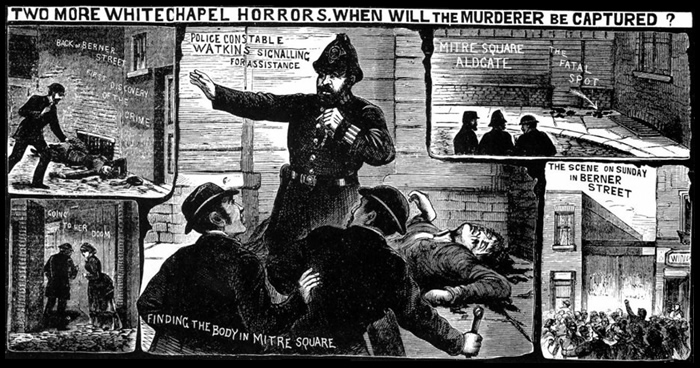 The story of Jack the Ripper, one of history’s most notorious serial killers, terrifies and fascinates in equal measure. The Ripper’s identity remains unknown, though hundreds of suspects have been investigated over the decades since the brutal murders.

Though a number of other women were murdered in 1888 in Whitechapel, Mary Ann Nichols, Annie Chapman, Elizabeth Stride, Catherine Eddowes, and Mary Jane Kelly are most likely to have been the Ripper’s victims. They are known in Ripper lore as the ‘canonical five’.

2. At least six other murders have been linked

Among them, Martha Tabram, a Whitechapel resident who had been working as a prostitute. Her body was found on 7 August, 1888 in George Yard Buildings, having suffered 39 stab wounds to the chest and abdomen. The post mortem revealed that the killer had used two different knives, one of which may have been a bayonet. The police therefore deduced that her murderer was a sailor or soldier. However Inspector Abberline later referred to Tabram as the Ripper’s first victim.

3. Four of the five Ripper victims had previously been married

The fifth, Mary Jane Kelly, does not appear in official records and little is known about her life.

4. The first victim spent the years prior to her death in and out of the workhouse

Following the murder of Mary Ann Nichols, the sum total of her possessions were listed as: a comb, a white handkerchief, and a broken piece of mirror.

5. Two of the victims  were murdered on the same night,

30 September is known as the Double Event. The body of Elizabeth Stride was discovered at about 1am in Dutfield’s Yard, off Berner Street. Shortly after, at 1.44am, PC Watkins found Catherine Eddowes in Mitre Square. Elizabeth, unlike the other victims, had not been disembowelled, leading to suggestions that the Ripper was interrupted. This might account for the Ripper being compelled to kill again so soon after.

6. The third victim was born near Gothenburg in Sweden

Elizabeth Stride moved to London in July 1866, possibly to work in service for a family living near Hyde Park.

7. The funerals of the victims were largely quiet affairs

However, according to a report in The Daily Telegraph, the funeral of Catherine Eddowes was quite the opposite. The report describes a cast of thousands participating in the funeral procession through Whitechapel, and hundreds more waiting at the church.

8. The first reference to ‘Jack the Ripper’ was made in a letter supposedly from the killer themselves

It was received at the Central News Agency on 27 September 1888. The letter, addressed ‘Dear Boss’, mocked the efforts of the police to find the killer and pledged to continue with the murder spree. It was signed with the ‘trade name’ Jack the Ripper.

Initially thought to be a fake, the letter made reference to clipping the ears of the next victim. Sure enough, three days later, the body of Catherine Eddowes was discovered, with part of her earlobe cut off.

9. George Lusk was president of the Whitechapel Vigilance Committee

This was a sort of neighbourhood watch, set up to patrol the streets looking for the Whitechapel fiend. On 16 October, he received a box containing a letter and part of a human kidney. The letter was addressed, ‘From hell’. A kidney was removed from the body of Catherine Eddowes, murdered on 30 September, though it could not be proven that the kidney in the box belonged to Eddowes.

10. Hundreds of names have been put forward as Ripper suspects

Montague John Druitt was considered a prime suspect, though the only evidence appears to be that the murders ended shortly before his own death in December 1888. George Chapman (born Severin Antoniovich Klosowski) has the advantage of actually being a murderer – and a serial murderer at that.

Chapman was hanged in April, 1903 for the murder of three of his wives. Despite the fact that Chapman killed using poison rather than a knife, Inspector Abberline himself believed him to be the Ripper.

More recently, the publication of Patricia Cornwell’s book ‘Portrait of a Killer: Jack the Ripper – Case Closed’ threw new light on another suspect, painter Walter Sickert. The crux of Cornwell’s argument lies in DNA evidence apparently collected from the Ripper letters that matches DNA found on letters written by Sickert. However, given that many, or perhaps all, of the Ripper letters are thought to be hoaxes, this cannot be conclusive.