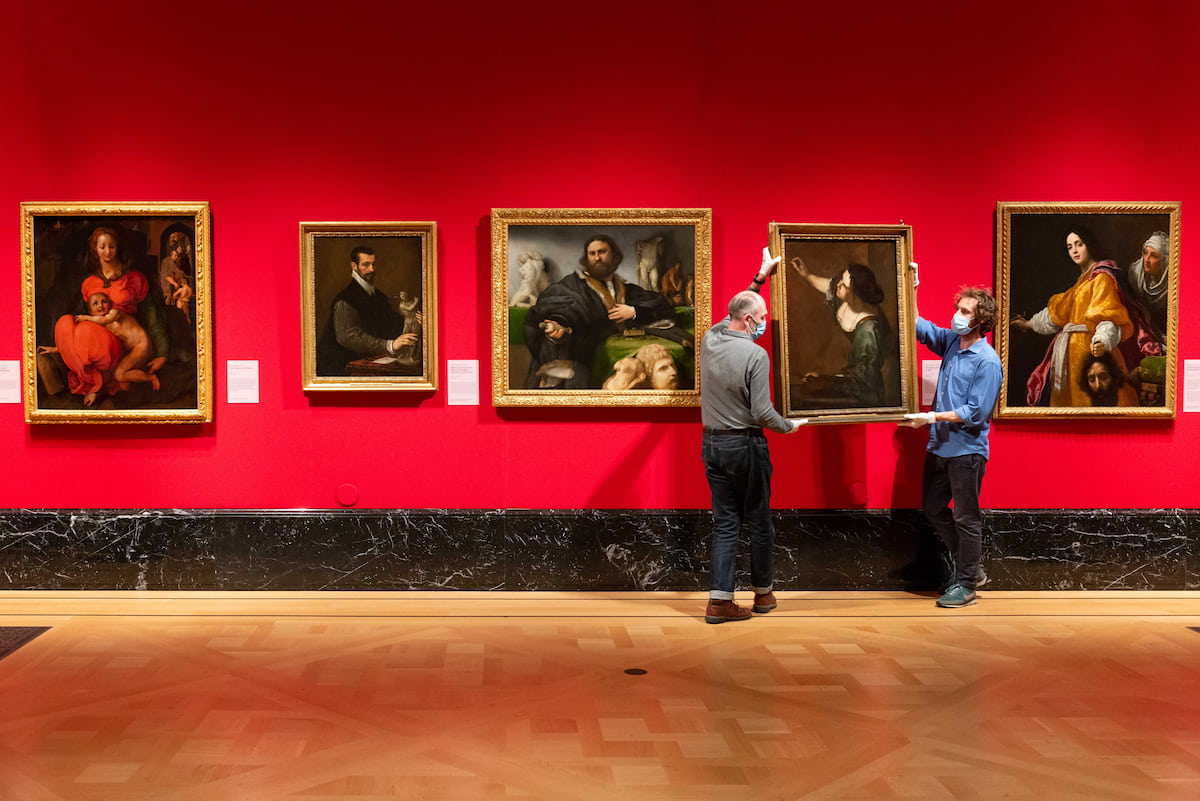 The Royal Collection is the largest private art collection in the world, containing roughly one million objects. The collection as it exists today was mostly acquired from the 16th century onwards: King Charles I was a passionate art collector, as was George III, George IV (including whilst as Prince Regent) and Queen Victoria, using funds from the royal purse to commission and purchase works from every period and region.

Today a rotating selection of works in the collection is on display to the public at any one time, including at the purpose-built Queen’s Gallery in Buckingham Palace. These paintings are all on display in the exhibition ‘Masterpieces from Buckingham Palace’.

1. Lady at the Virginals with a Gentleman by Johannes Vermeer (early 1660s)

Acquired by King George III in 1762, this is one of 36 oil paintings attributed to Vermeer: their scarcity makes them extremely valuable. This painting is noted for its extremely accurate depiction of space and depth: the marble floor tiles are painted using linear perspective to draw the eye to the figures in the back of the room. 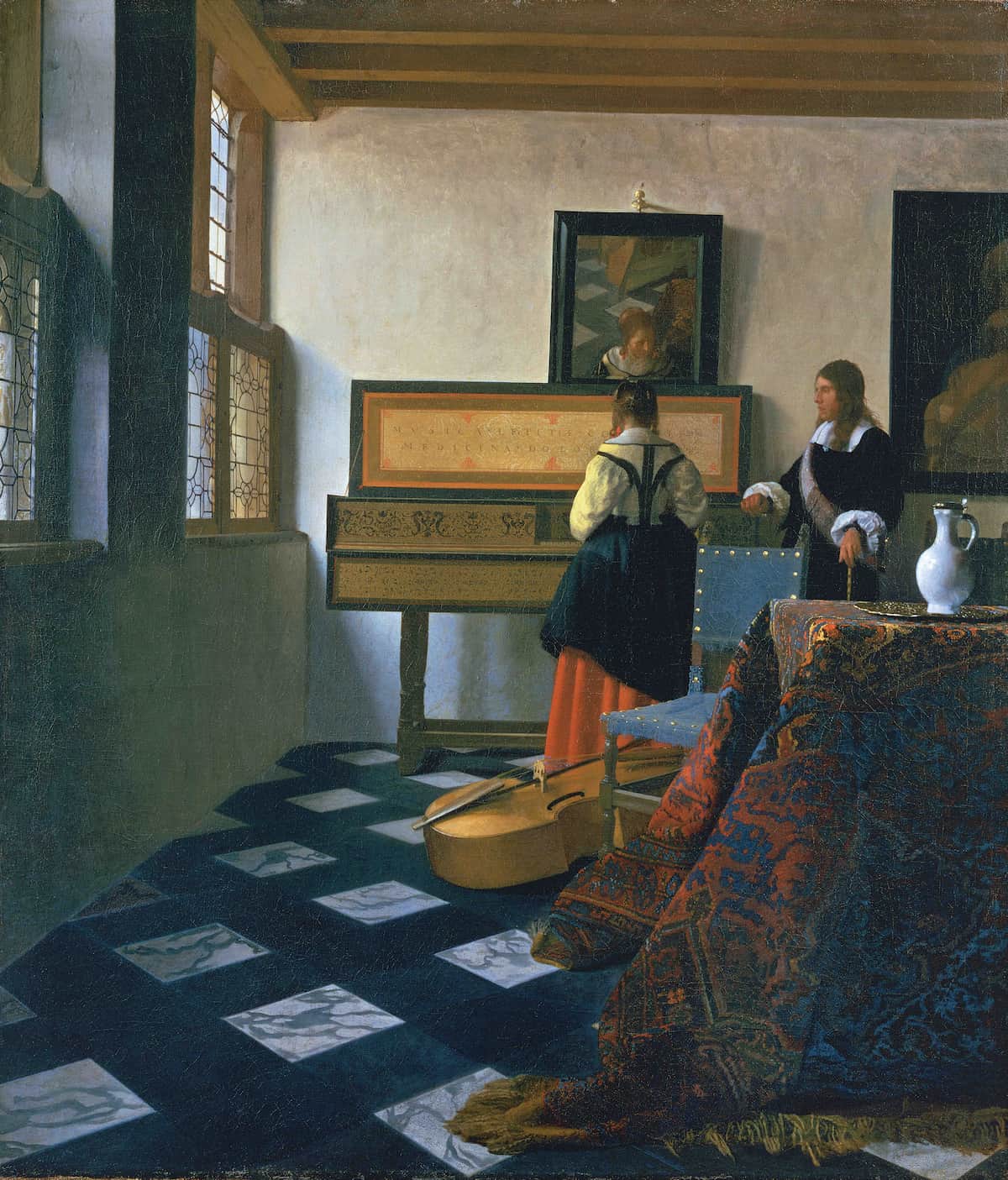 Johannes Vermeer, A Lady at the Virginals with a Gentleman (‘The Music Lesson’), early 1660s

Thought to have been a gift to the future King Charles I in order to establish his credentials as a painter, this self-portrait of Rubens is all about showcasing technical skill. He uses strong light and dark (chiaroscuro) and clever, careful use of colour, including a dash of blue for the vein on his right eye and coral pink to highlight his lower eyelashes. 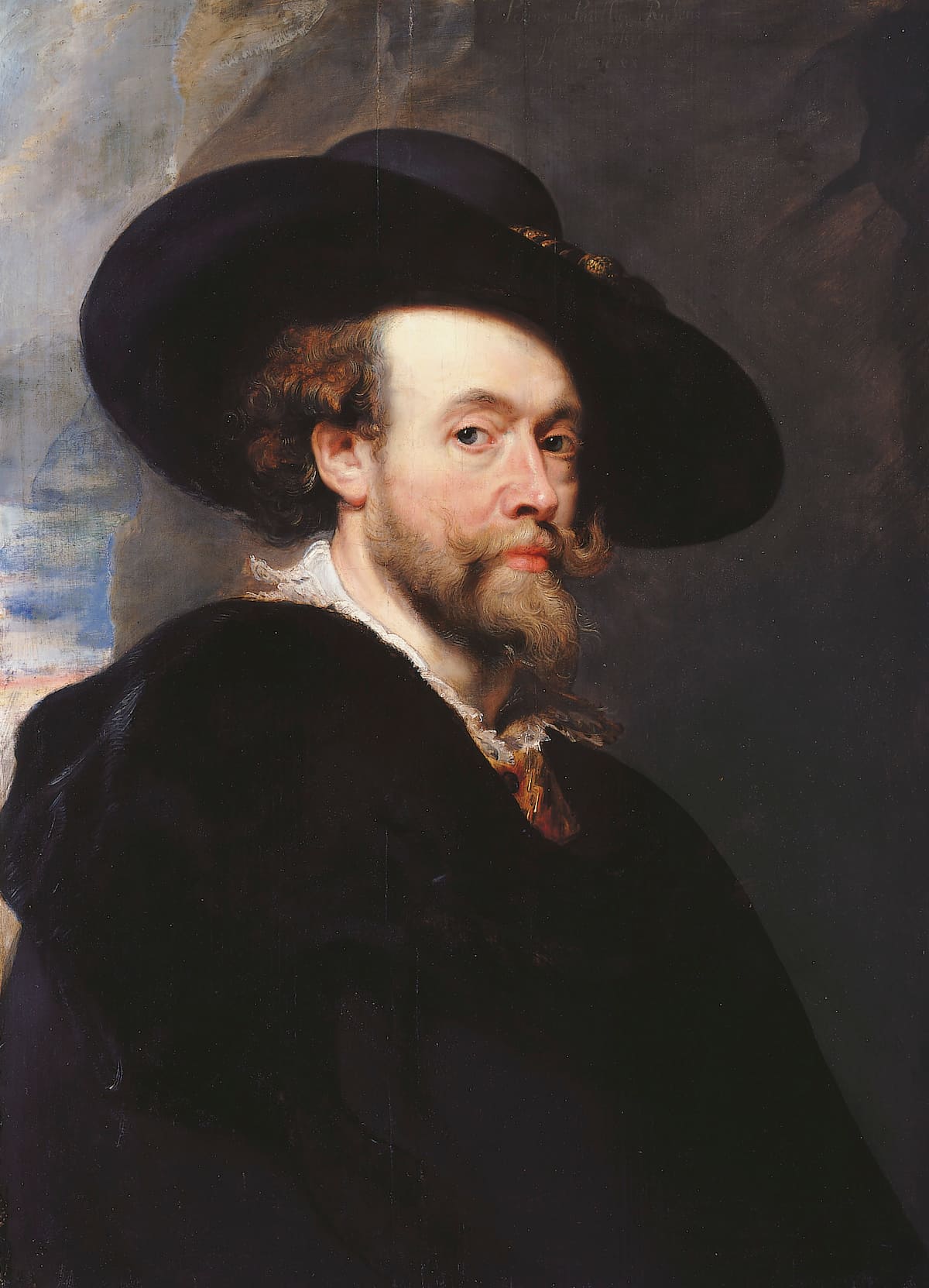 Characteristic of Rembrandt’s early ‘smooth’ style, this portrait of Agatha Bas is extraordinarily lifelike. Rembrandt’s attention to detail (from the tiny baby hairs on her hairline to the lustre of her pearl necklace) and addition of an ebony frame within the painting makes her seem as though she is about to step out of the picture and into the room. 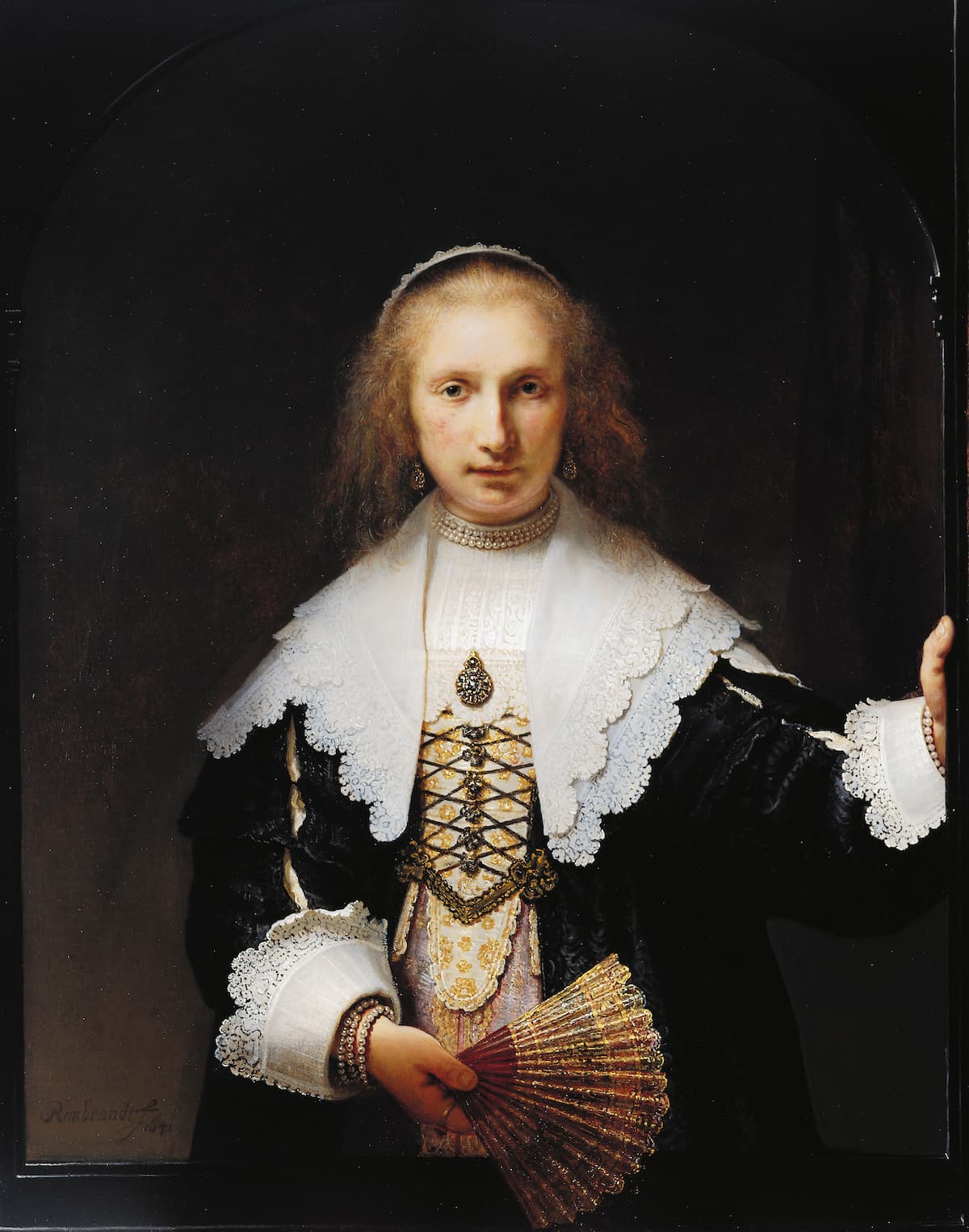 4. Self Portrait as the Allegory of Painting (La Pittura) by Artemisia Gentileschi (1638-9)

Very few images of the famous 17th century female painter, Artemisia Gentileschi exist: this one shows remarkable technical skill as the angle Artemisia poses at would have been difficult to capture. It’s thought this painting was done when Artemisia was invited by King Charles I in 1638 to join her father, Orazio Gentileschi, to paint in England, and it entered the Royal Collection shortly afterwards. 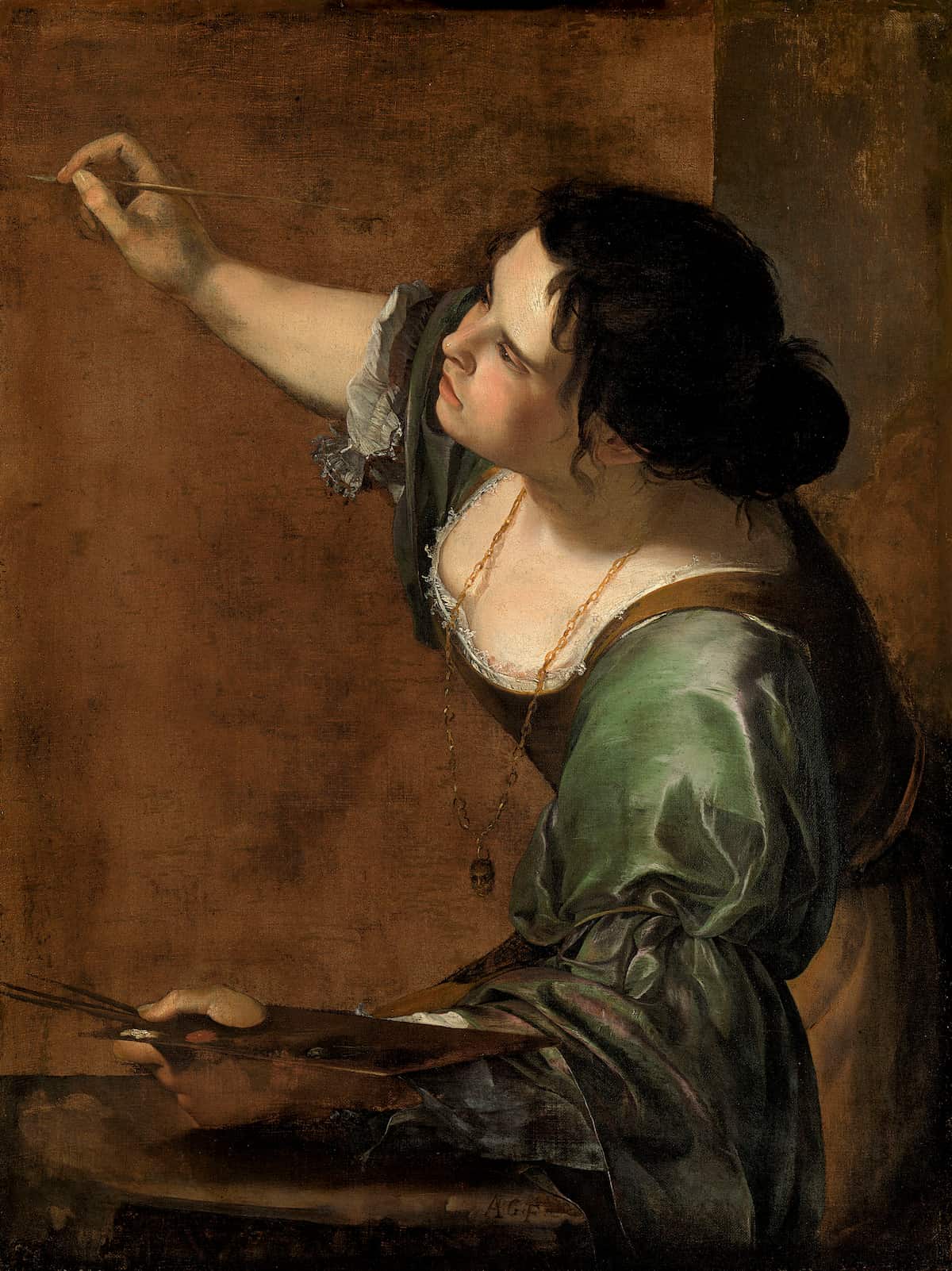 Self-Portrait as the Allegory of Painting (La Pittura), c.1638-9, by Artemisia Gentileschi

5. Judith with the head of Holofernes by Cristofano Allori (1613)

Judith with the head of Holofernes was a popular Biblical story for painters at the time: this particular version by Cristofano Allori is said to have been inspired by one of his unhappy affairs. Allori used his own features to represent Holofernes and his lover, Maria de Giovanni Mazzafirri as a model for Judith. 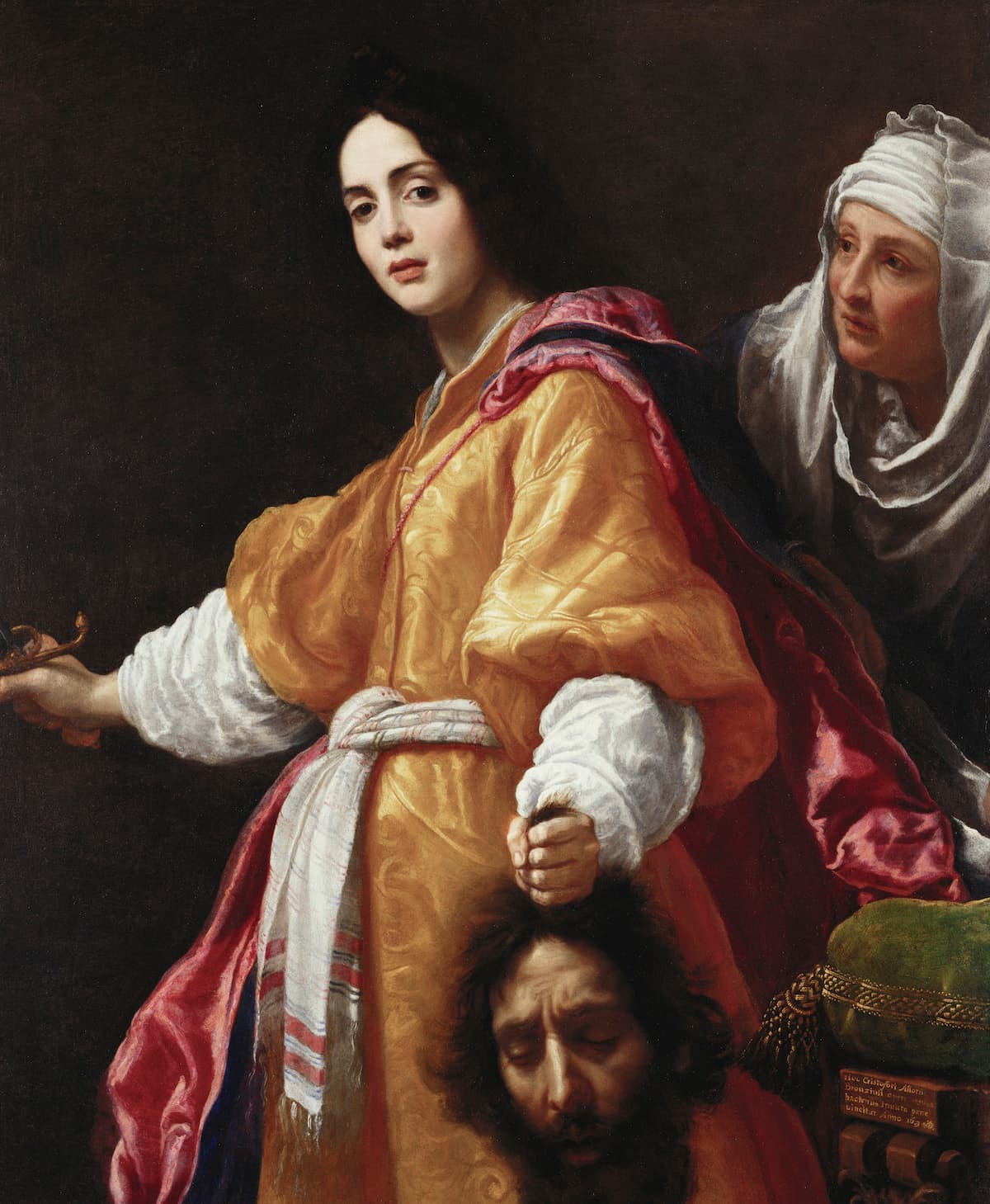 Cristofano Allori, Judith with the Head of Holofernes, 1613

Claude Lorrain was a 17th century French artist who, unusually for the time, spent the majority of his time focused on landscape painting. His inclusion of the sun in paintings was innovative, and he was fascinated by the effects of light within a landscape, which can be seen in this harbour scene. 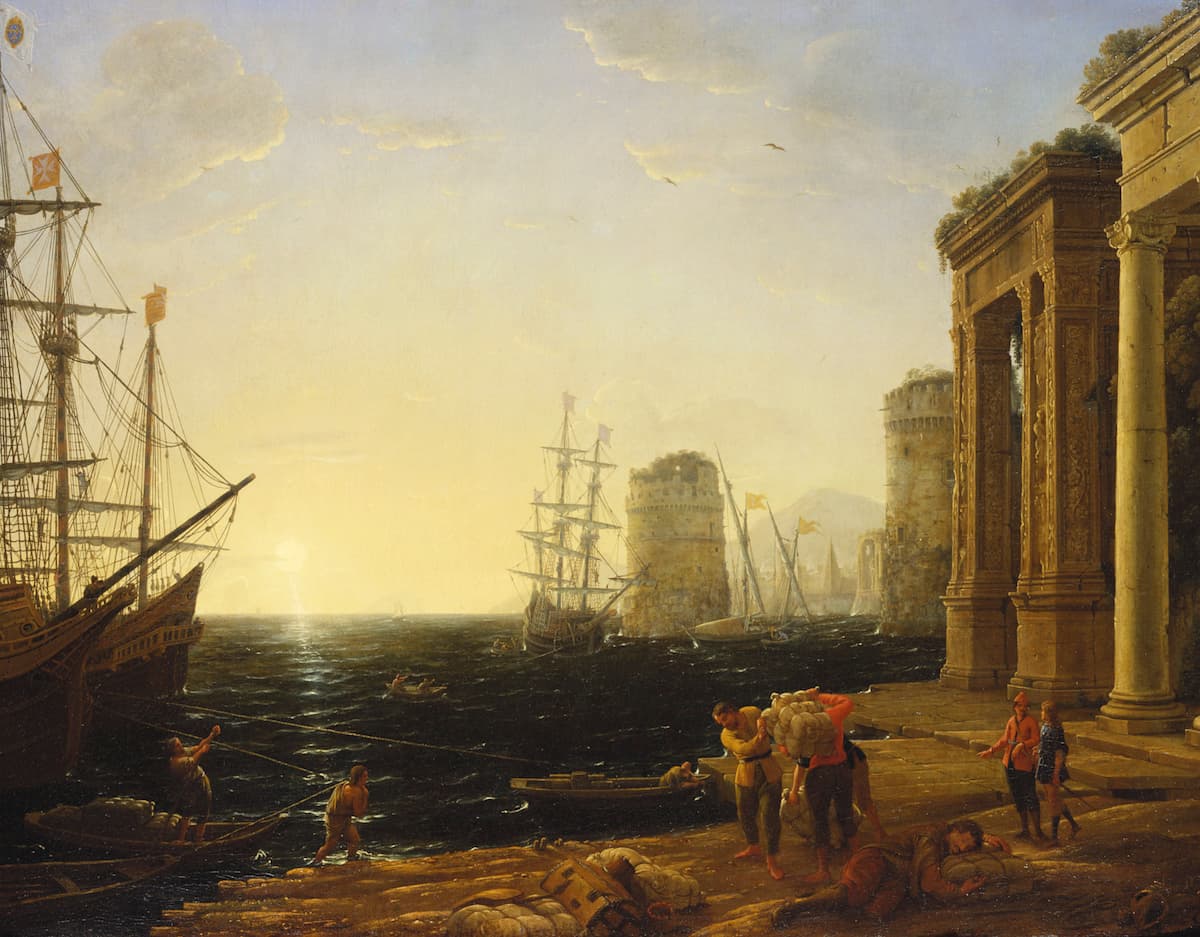 Canaletto is most famous for his depictions of 18th century Venice, creating pictures which were a blur between real life observation and figments of his imagination. They were particularly popular with noblemen who wanted a souvenir from their travels around Europe. The picture was acquired by King George III in 1762 from the collection of Joseph Smith, British Consul in Venice. 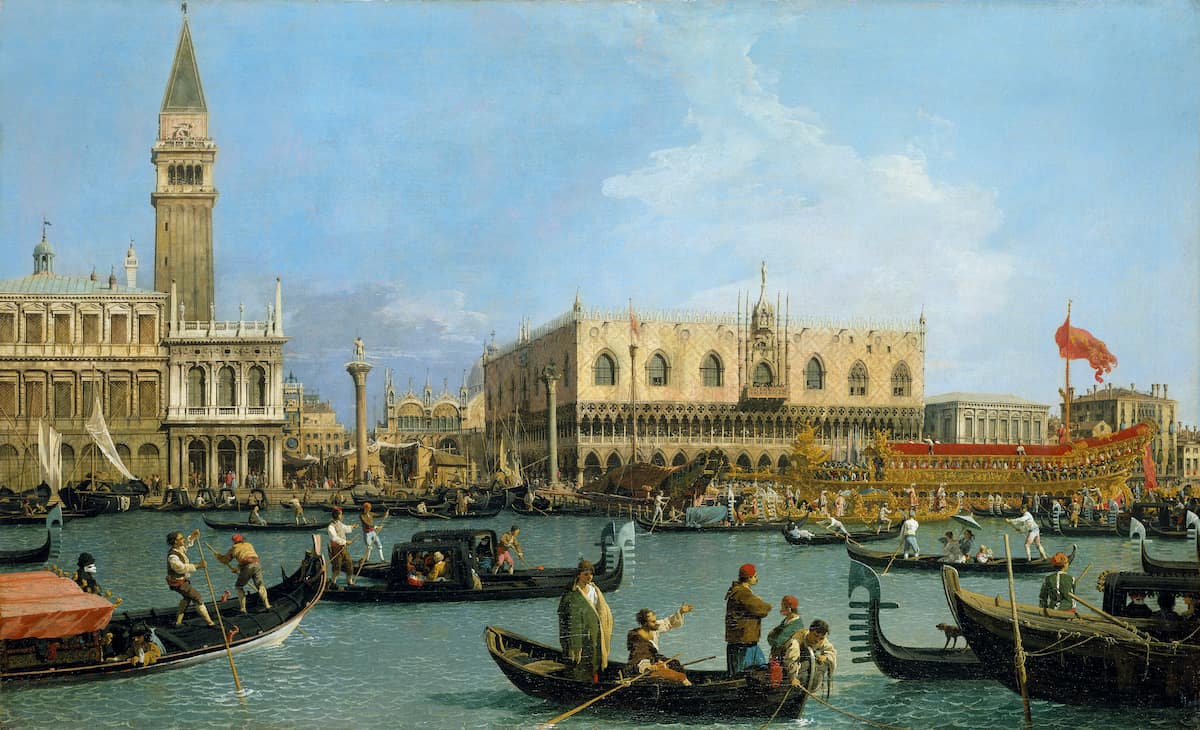 Jan Steen was a 17th century Dutch painter, and this particular work showcases his technical skill in respect to the depiction of light, still-life objects and foreshortening, as well as his ability to hold the viewer’s attention. The woman sits in the middle of a scene of seduction: an unmade bed, an unlaced jacket, and the putting on of a stocking, all whilst she stares out at the viewer, unabashed. 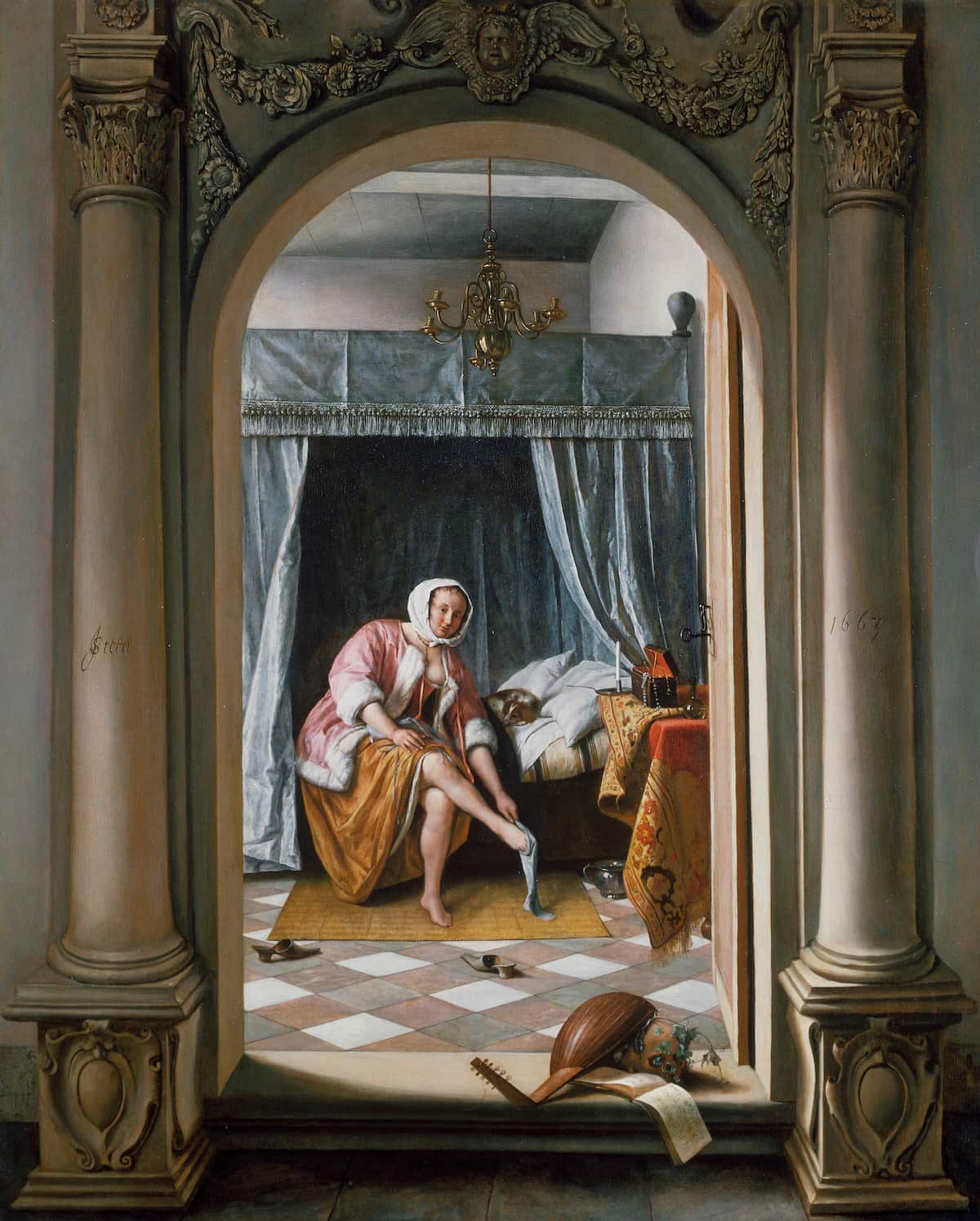 Anthony van Dyck was a favourite of King Charles I, but this painting was completed in his early years, probably under the supervision of Peter Paul Rubens.

The intense, dramatic scene is designed to be read from left to right (something 17th century viewers would have done automatically) and depicts Christ healing a poor paralytic, watched on the right hand side by one of his disciples. The use of light and dark reflects notions of holiness and status. 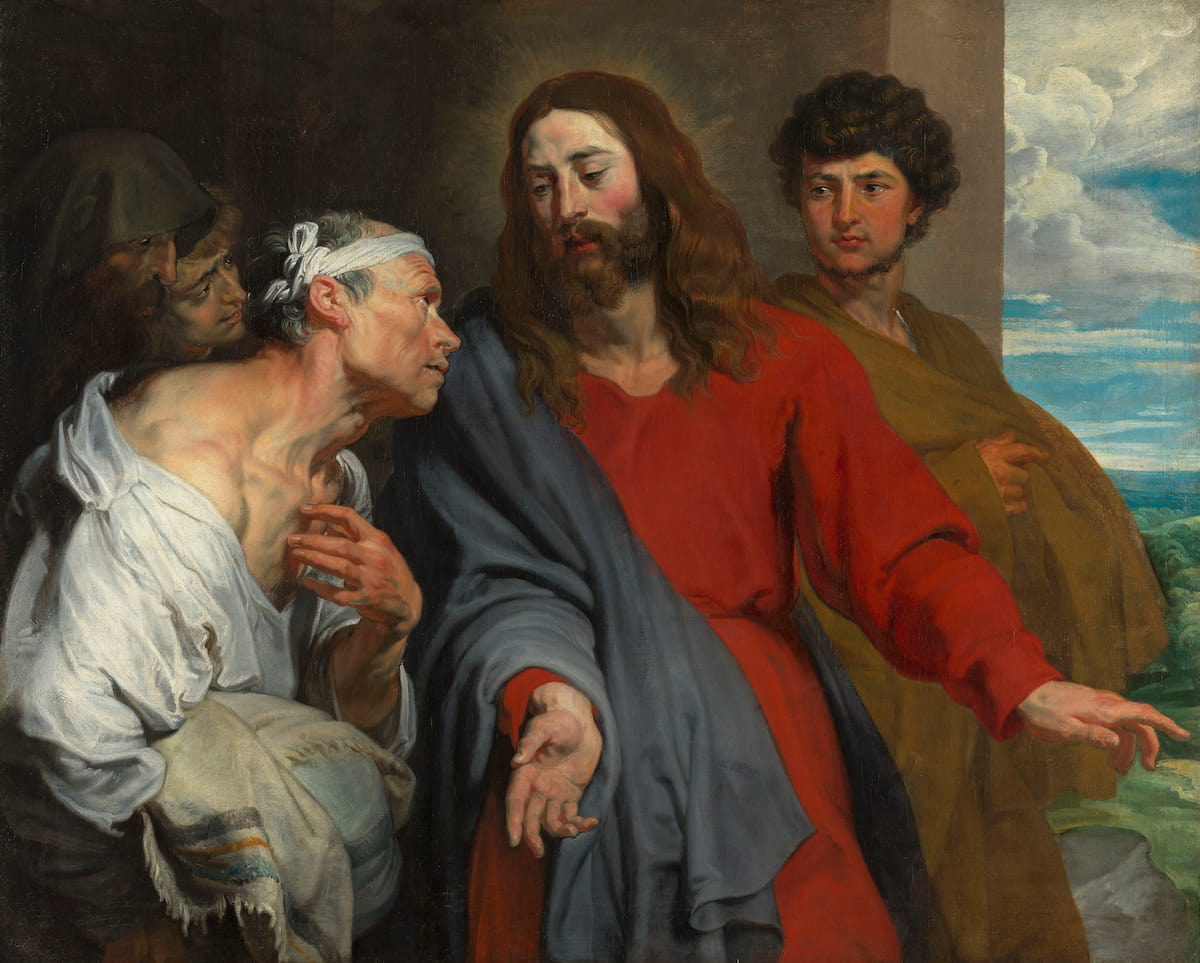 One of the most important and innovative Renaissance portraits, Lorenzo Lotto firmly established himself within the genre with this portrait of Lorenzo Lotto. Unusually for a portrait, it’s painted landscape to include more of Lotto’s prized collections in the background. The painting was presented to the newly crowned King Charles II by the states of Holland and West Friesland

Whilst it can be read as a simple portrait, many have put forward interpretations about Lotto posing questions about art, nature and religion through the composition of the painting, citing the juxtaposition between one of Lotto’s hands on his heart and the other offering out a statue of Diana to the viewer. 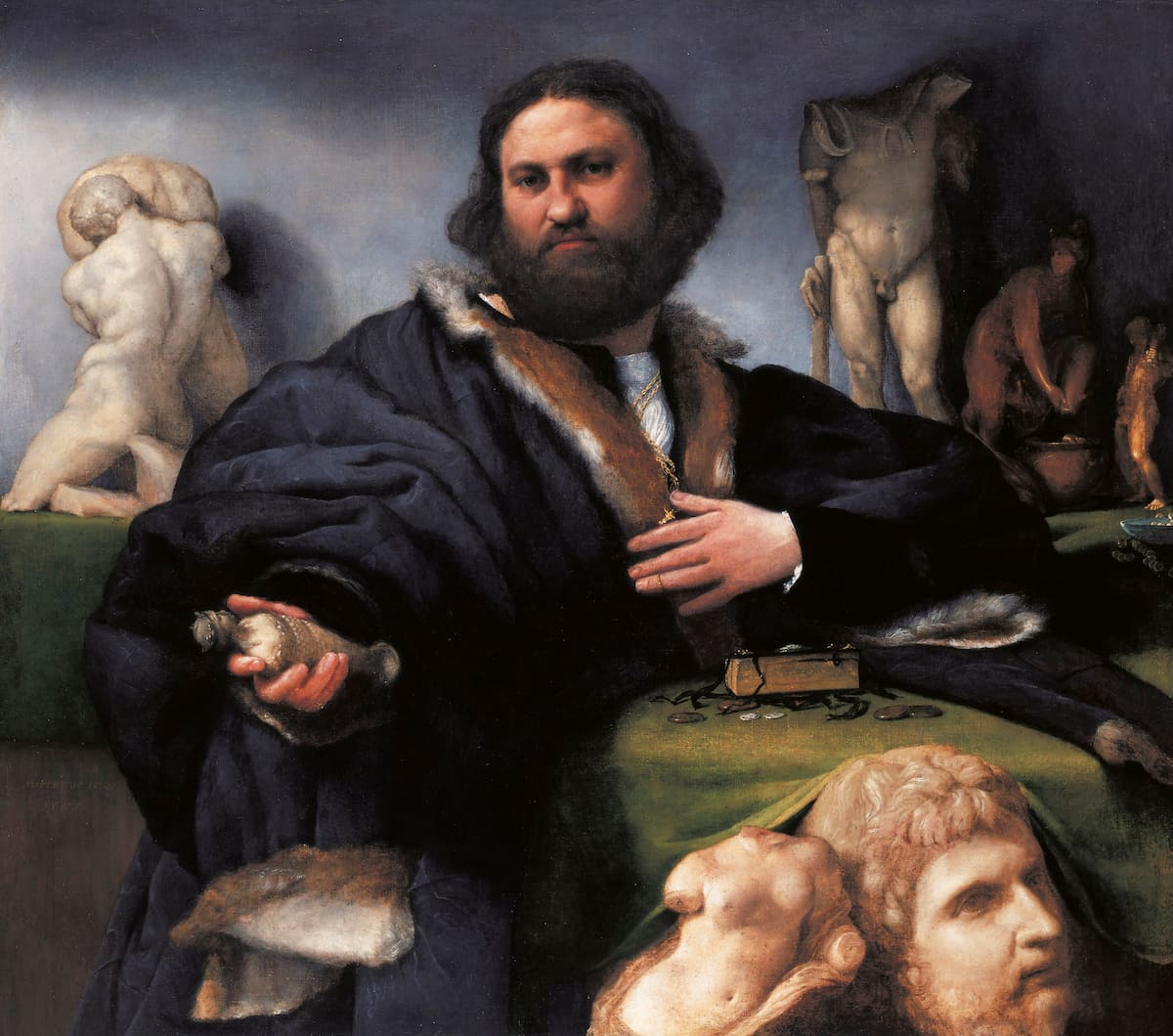