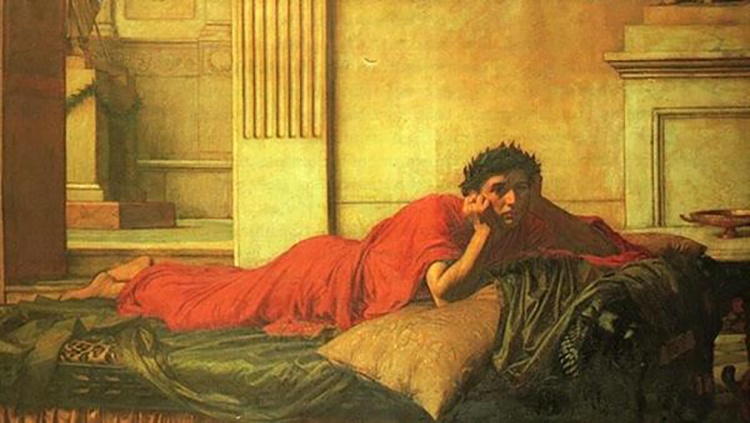 Rome’s first Imperial dynasty – the descendants of Julius Caesar and Augustus – was ended in 68 AD when its last and most infamous ruler took his own life. As Nero died, he proclaimed “what an artist dies with me” in a piece of arrogant melodrama which has come to symbolise the worst and most ludicrous excesses of his 13-year reign.

In the end, Nero was his own worst enemy, as his contempt of the Empire’s traditions and ruling classes gave rise to rebellions that ended the line of the Caesars.

From order to depravity

Augustus, the adopted son of Julius Caesar, had been a wise and popular ruler who left the Empire in a good shape when he died at a ripe old age in the year 14. His successor, Tiberius – though a man of great cruelty – had also kept events outside Rome fairly calm and well-ordered by letting the competent governors of the provinces rule without too much Imperial interference.

The Imperial rule only started to devolve into the true depths of depravity for which it is famous under Gauis Caligula, the heir and great-nephew of Tiberius.

Something of a precursor of Nero, Caligula took the throne young and was initially popular and successful, before an illness or possible poisoning in 37 turned him mad and vicious, culminating in his assassination by his own guards four years later.

By the time of the 28-year-old Caligula’s death, there were very few descendants of Caesar left, most having been murdered in some way by jealous relatives and rivals.

As a result, when the Praetorians who had murdered Caligula sought a new emperor, they had to settle on Claudius, the ageing nephew of Tiberius, who had only been left alive because a limp and a stammer had convinced his more vicious family members that he was a harmless fool.

Claudius proved to be a relatively successful emperor, but his greatest fatal mistake was marrying his niece Agrippina in later life, and adopting her son Nero as his own in order to secure the alliance.

As Nero was older than Claudius’ natural son by a previous marriage, Britannicus, he now had a superb claim to the imperial purple. When Claudius was almost certainly poisoned by his wife in 54, her young son declared the dish of mushrooms that had done the deed to be “the food of the gods”.

When Claudius died Britannicus was still younger than 14, the minimum legal age to rule, and therefore his step-brother, the 17-year-old Nero, took the throne.

The day before Britannicus was due to come of age, he met a very suspicious death after drinking wine prepared for him at his celebratory banquet, leaving Nero – and his equally ruthless mother – in undisputed control of the world’s greatest empire.

Having poisoned two different husbands to reach her exalted position, Agrippina was unwilling to relinquish the hold that she had over her son, and was even portrayed face-to-face with him in his early coins. Soon, however, Nero grew tired of his mother’s interference and had her murdered by a loyal freedman (ex-slave) in 59.

Despite a promising start to his reign, Nero would permit no checks on his power by 60, and completely disregarded the wishes of the senate. The killing of a senator called Antistus for complaining about Nero at a party shows the increasingly paranoid and unhinged nature of his rule.

The young Emperor’s immense popularity amongst the common people of the empire only made the educated classes distrust him even more.

He had an uncanny knack for knowing what actions would endear him to them and, after putting on public musical performances, cutting taxes and persuading the King of Parthia to come to Rome and take part in a lavish ceremony, he was the darling of the crowds.

Nero was so popular, in fact, that after his death there were three separate attempts by impostors over thirty years to gather support by assuming his appearance – one of which was so successful that it almost lead to a civil war.

Nero is said to have been obsessed with his own popularity and far more impressed by the theatrical traditions of the Greeks than Roman austerity – something that was considered simultaneously scandalous by his senators and superb by the inhabitants of the eastern part of the empire.

Unfortunately for Nero, the street-sellers and theater-goers of the relatively peaceful east were not the ones who controlled the powerful armies on Rome’s western frontiers.

In 68, the plots and mutters of discontent that had always accompanied Nero’s reign finally exploded into open rebellion when Gaius Julius Vindex, the governor of Galla Lugdinensis (modern north-west France) raised his troops against the emperor.

Vindex was aware that he did not have the standing to declare himself a rival emperor, and instead appealed to Servius Sulpicius Galba, the popular governor of north-east Spain, to do so.

Galba was initially hesitant, but when the panicky senate declared himself an enemy of Rome, he decided that he had little choice but to carry out the rebellion to its conclusion. Soon cracks began to appear as the prefect of the Praetorians – a large military force right on Nero’s doorstep – declared for Galba.

By now the famously fickle Roman mob was baying for Nero’s blood and his plan to flee to the loyal eastern provinces was foiled. Instead, one of his few remaining loyal freedmen took him to his villa outside the city.

As dramatic and self-important as ever, when faced with insurmountable odds Nero wanted a glorious death by suicide in the true Roman tradition.

This desire came after he received the news that the senate was planning his execution, and he ran through the villa calling for someone to finish him when he found himself unable to do it. When no-one would, he cried pathetically, “Have I neither friend nor foe?”.

Eventually, Nero’s private secretary, Epaphroditos, was bullied into stabbing the emperor, who was bleeding to death when men from the senate arrived, having been given the task of transporting him to safety to prevent the extinction of the Imperial line.

It was, in a bit of tragicomedy fitting with Nero’s life, too late, and with their hopes of preserving the Caesars gone, the senate desecrated the records of Nero in order to appease Galba as he arrived from Spain to be crowned.