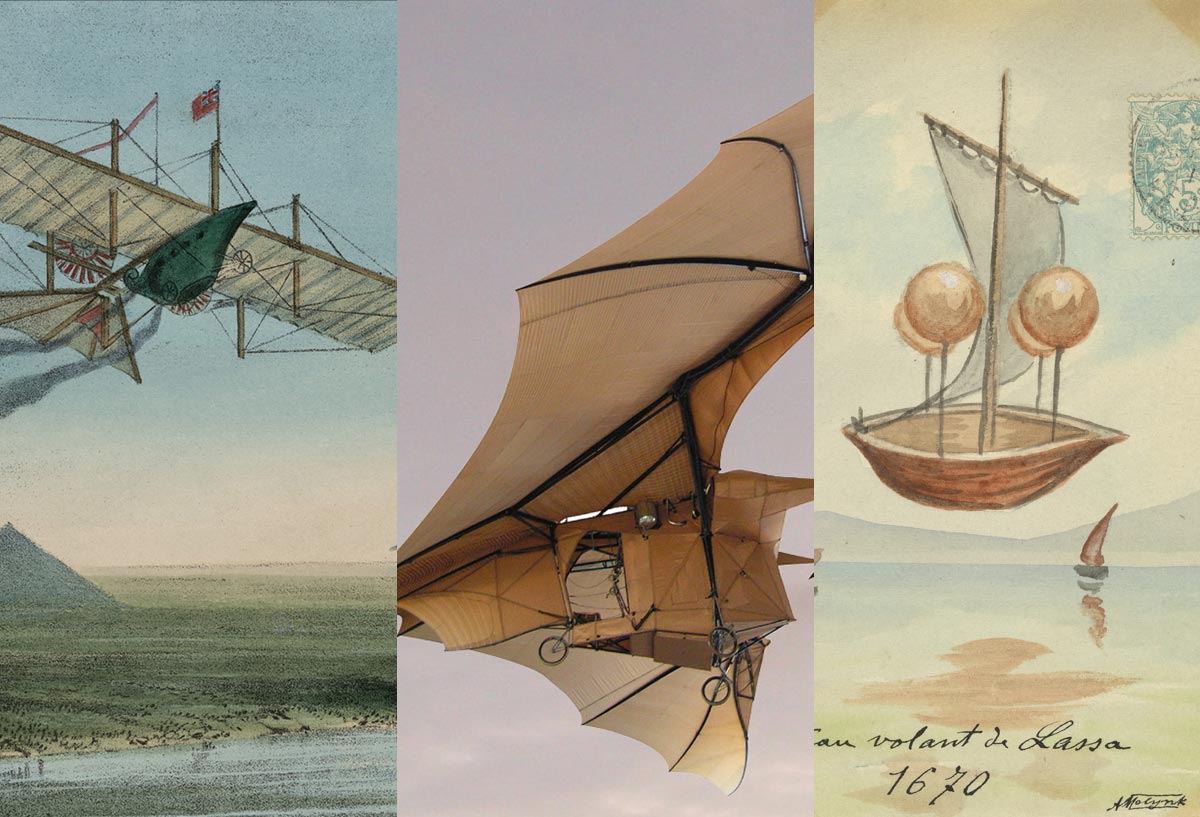 The Wright brothers changed the world in 1903, when they successfully took to the skies and achieved the first powered, sustained and controlled airplane flight. Two years later they managed to build the first fully practical airplane. Ever since, the skies have served as bustling transportation highways for humans and goods.

Since ancient times, our ancestors dreamed about seeing the world from above. Wilbur and Orville Wright were not the first people who tried to fly. There is a long history of inventors and thinkers coming up with interesting and sometimes outright crazy ideas to follow birds into the skies.

Here we take a look at 12 of the most weird and wonderful flying machines designed throughout the ages. 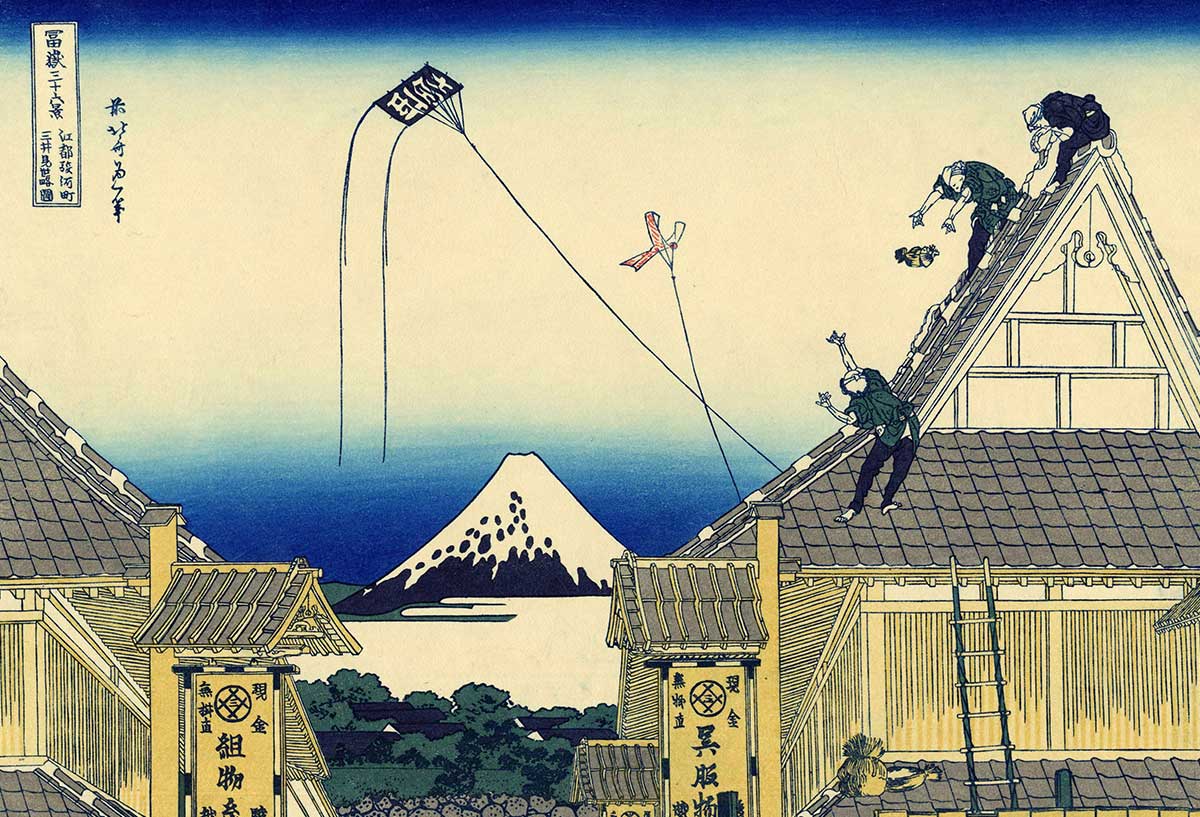 Already during the early medieval age, states were trying to use the skies for military purposes. Man-carrying kites, for example, were used in ancient China and Japan, with some of the earliest sources dating back to the 6th century CE. The main purpose of these kites was to gather information about the terrain or to locate enemy positions. In the 13th century, the European explorer Marco Polo commented on the use of treacherous man-lifting kites during his visit to Yuan dynasty China. 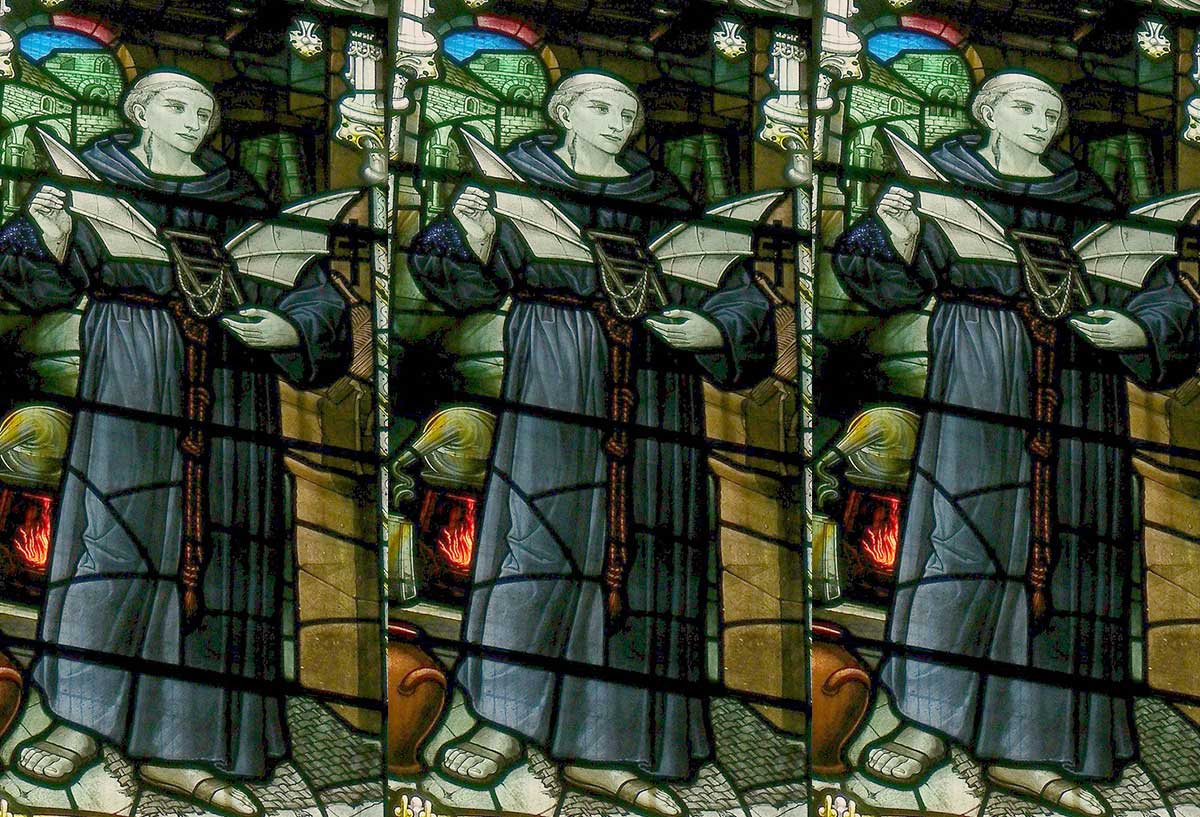 Elmer (the Flying Monk) of Malmesbury

Eilmer of Malmesbury was an 11th-century English Benedictine monk and an avid reader of the Greek myth of Daedalus, where the protagonist invented wings so that he and his son Icarus could escape Crete. Inspired by this story, Eilmer attached wings to his hands and feet and launched himself from the top of a tower at Malmesbury Abbey. It is said that he was airborne for 15 seconds, covering around 200 meters before landing and breaking both of his legs. 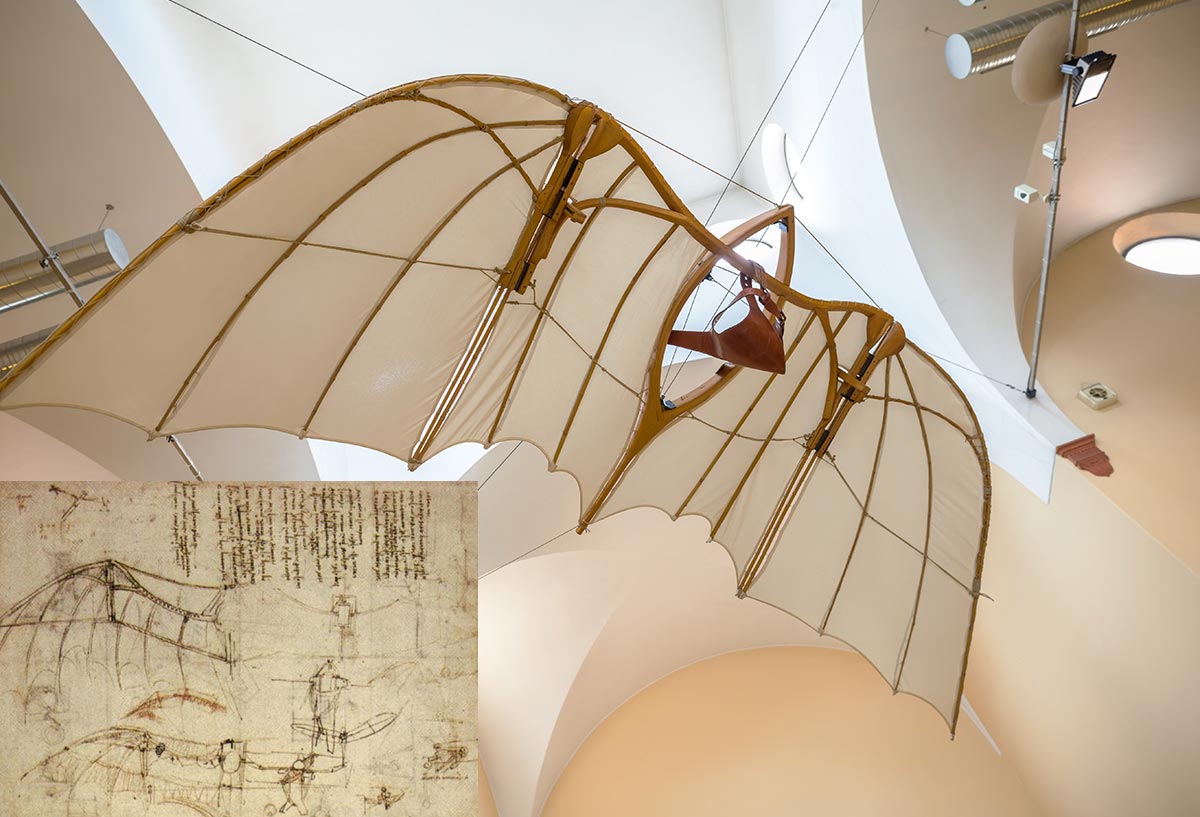 The renaissance genius Leonardo da Vinci had many ideas on how humans could take flight. This design follows a common idea of emulating bird or bat wings. There are legends that Leonardo Da Vinci tried out his invention with one of his apprentices, though the lack of concrete evidence casts doubt on these claims. 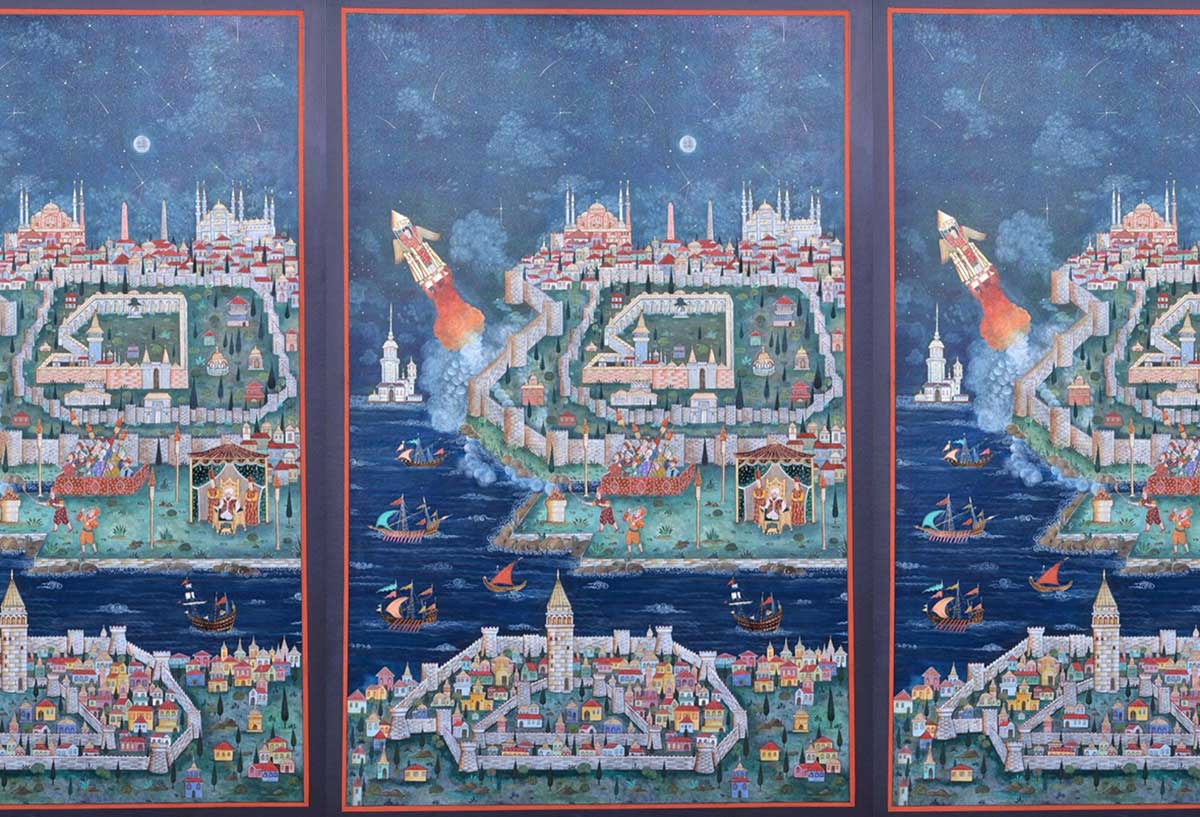 Lagâri Hasan Çelebi was an Ottoman aviator who, based on traveller Evliya Çelebi’s account, made a successful manned rocket flight. The claim is that in 1633, Lagari launched a 7-winged rocket fuelled by gunpowder in Constantinople (now Istanbul). It is said that before take-off, Lagari jokingly exclaimed something along the lines of, “my Sultan, I’m going to talk to the Prophet Jesus”. He landed safely in the sea, swimming back ashore. 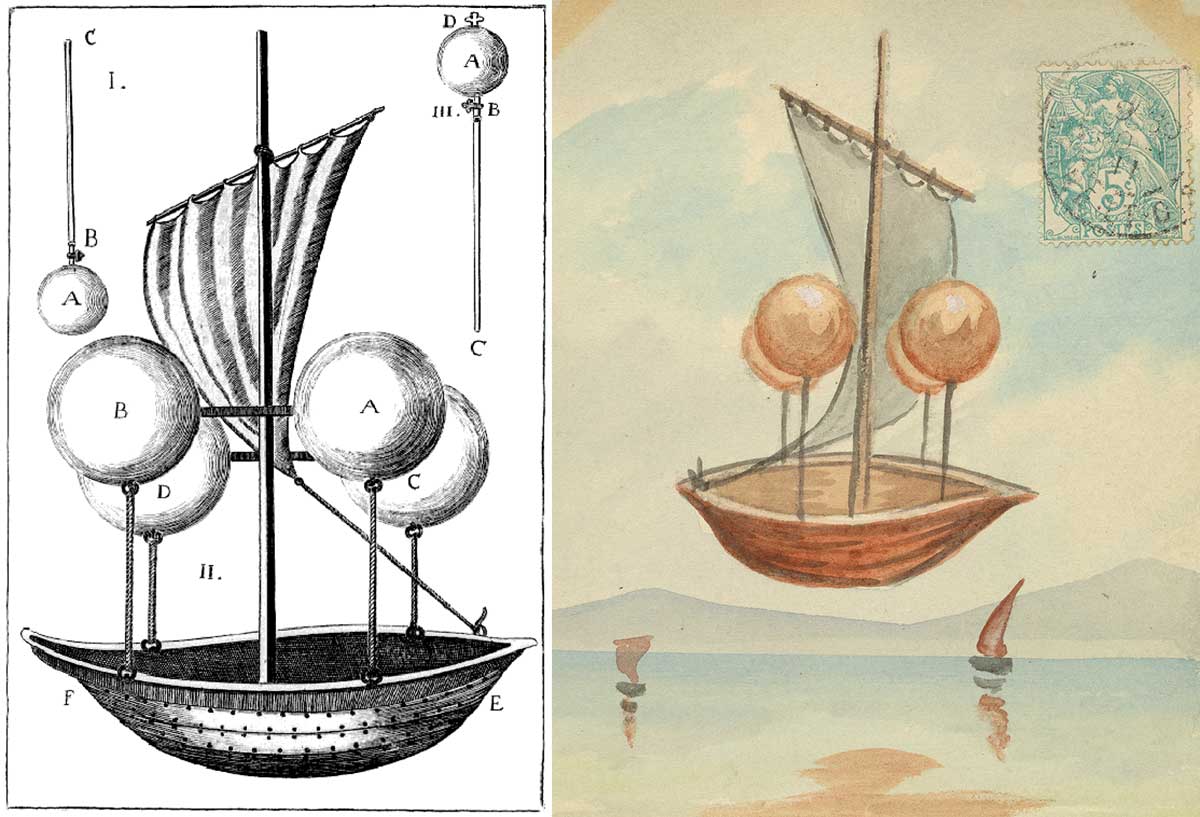 The idea for this quirky looking flying machine came from Italian Jesuit priest Francesco Lana de Terzi. His design had a central mast to which a sail was attached, and four masts which had thin copper foil spheres attached to them: the air would be pumped out of the spheres, leaving a vacuum inside.

The idea was that because of the vacuum, the balloons would be lighter than the surrounding air, which would provide the aircraft with the necessary lift. In practice, de Terzi’s spheres would have collapsed under air pressure, and further developments had to wait for more practicable lifting gases. 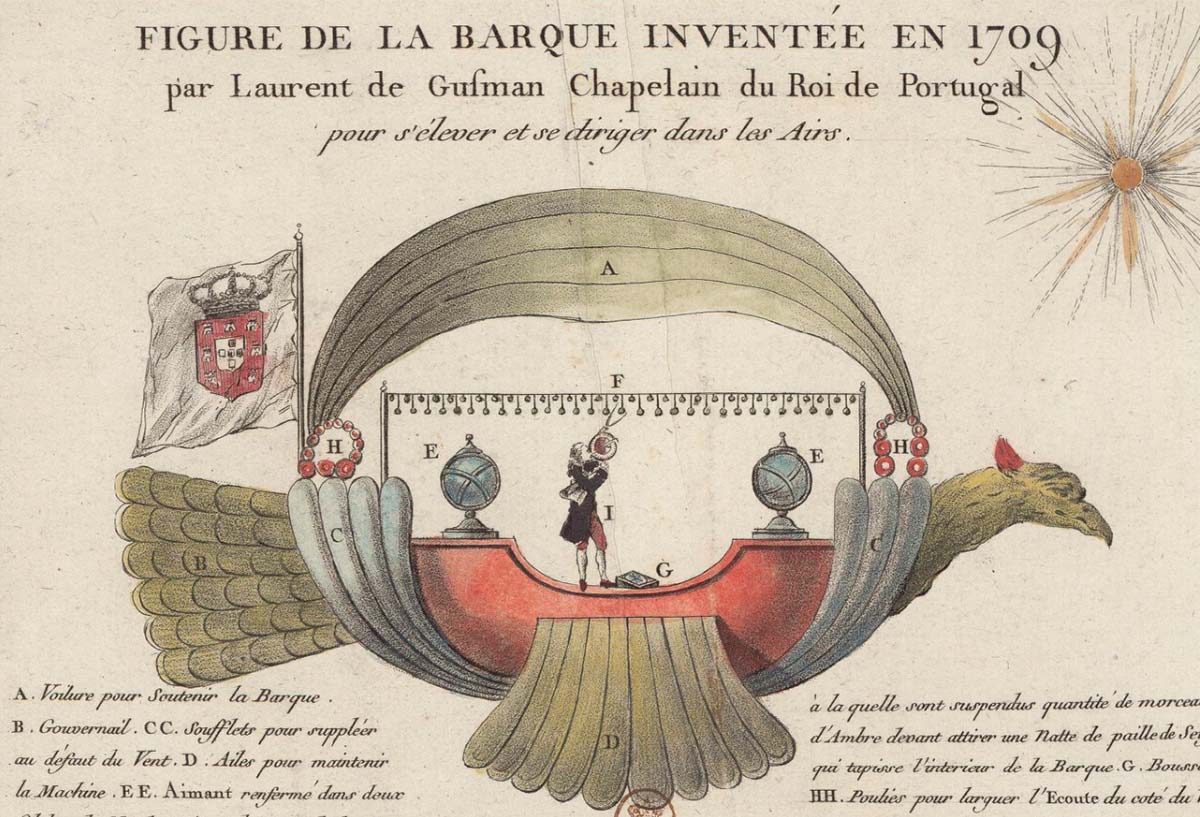 In 1709, Bartolomeu Lourenço de Gusmão, a Brazilian-born Portuguese priest turned aeronautical innovator, propelled a small balloon made of paper about four meters into the air, using combustion that filled the balloon with hot air. This design could be said to prefigure the ballooning technology of the Montgolfier Brothers, who are often hailed as having performed history’s first hot air balloon flight – some 74 years after de Gusmão’s balloon experiment. 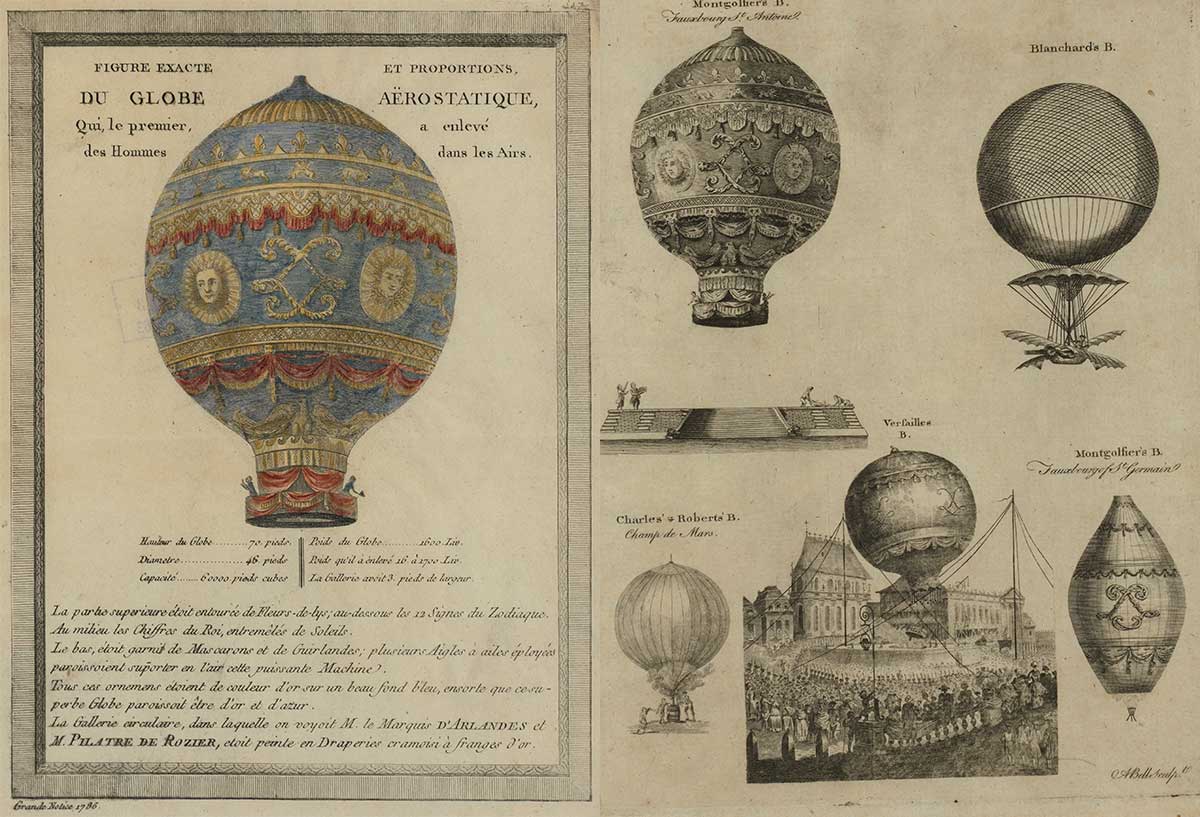 On 21 November 1783, Jean-François Pilâtre de Rozier and François Laurent d’Arlandes took to the skies on what is widely hailed as the first truly successful, manned hot air balloon flight. The model was designed by the famed Montgolfier Brothers, and the widely publicised flight lasted for about 20 minutes above Paris. It was witnessed by the French King Louis XVI and American inventor Benjamin Franklin. 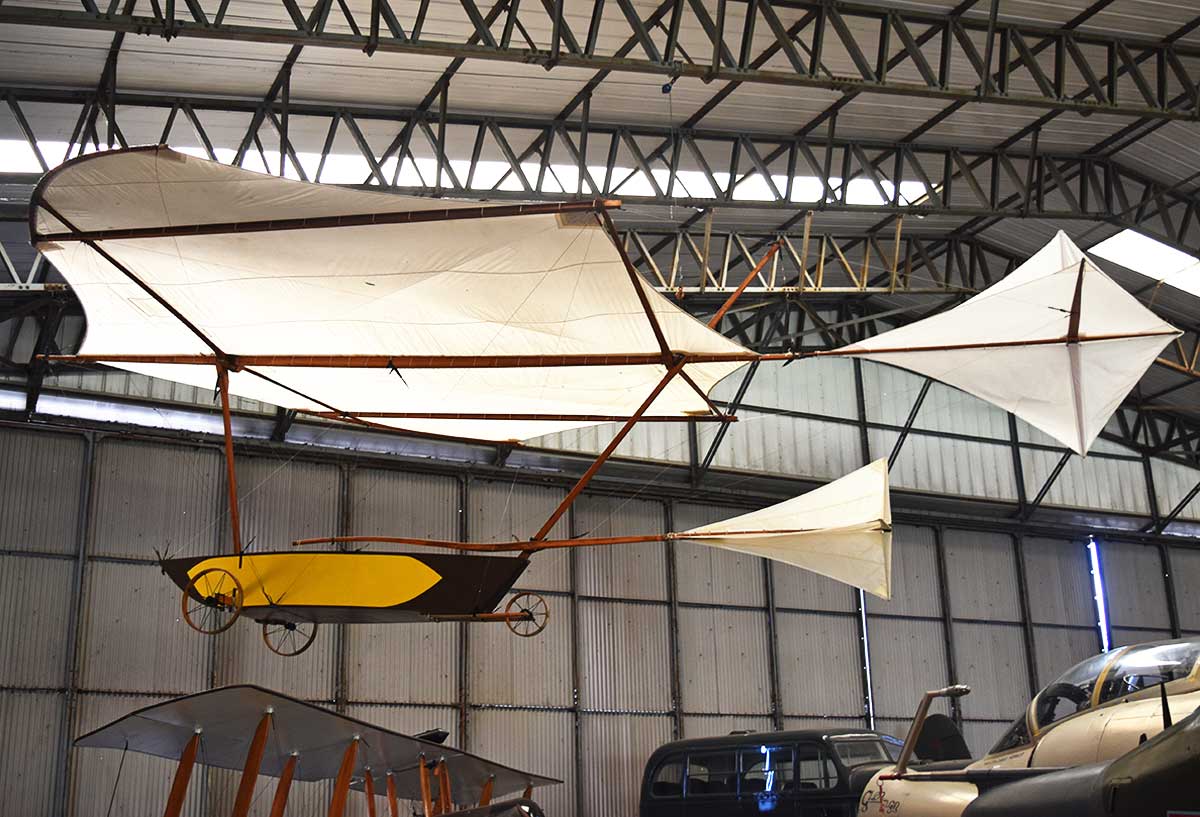 Sir George Cayley, who was an English engineer, inventor and aviator, is mainly remembered for his pioneering studies and experiments with flying machines. In 1804 he successfully flew in a glider that he designed. The device had a very similar layout to a modern airplane, showcasing the key developments Cayley bought to the field. 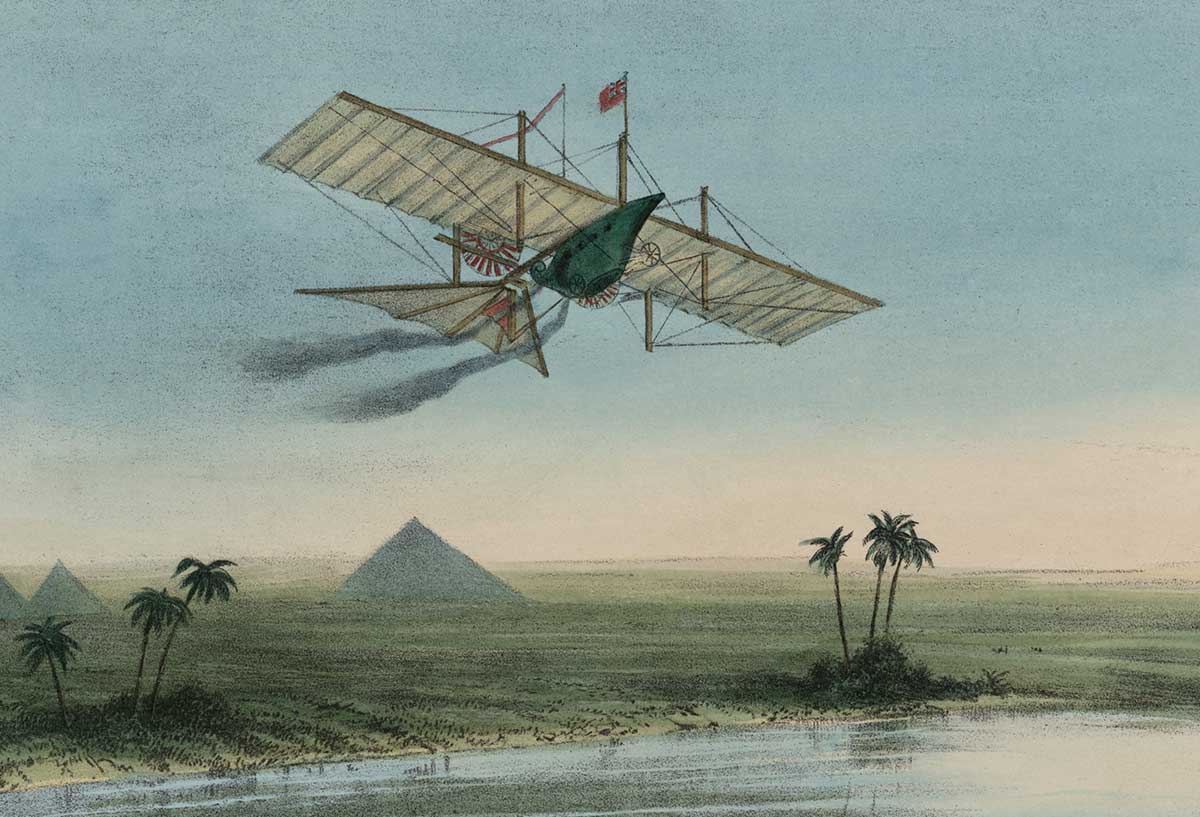 Drawing of an Aerial Steam Carriage

Sir George Cayley’s work greatly influenced the designs of the British-born engineer William Samuel Henson, who patented his steam-powered flying machine in 1842. In practice, Henson’s machine was incapable of flight since it had insufficient power from its heavy steam engine. Improvements on the original blueprints would lead to the development of a more successful model in 1848. That one was able to fly for very short distances inside a hangar. 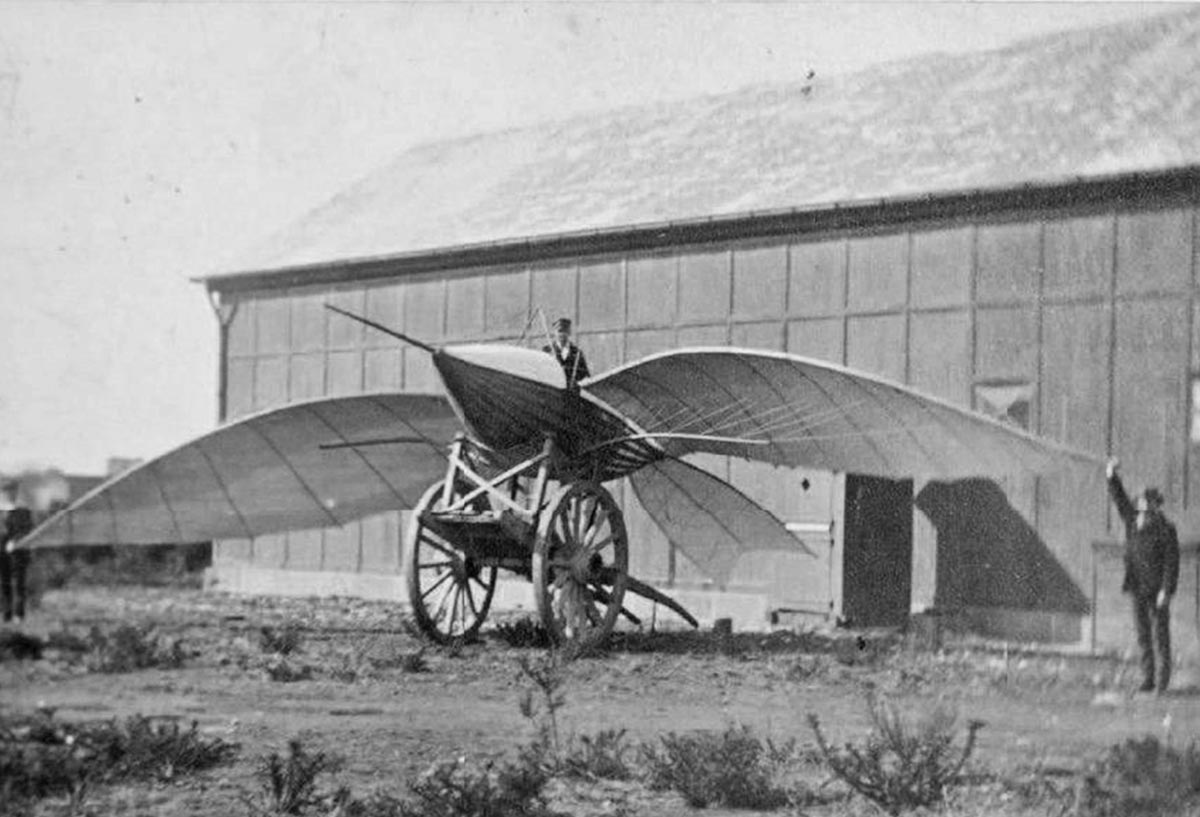 This glider was built by French sea captain and sailor Jean Marie Le Bris. In 1856, he flew briefly on the beach of Sainte-Anne-la-Palud, with his aircraft being placed on a cart towed by a horse. Reportedly, he reached a height of 100 meters and covered a distance of 200 meters. With the support of the French Navy, he built a second model in 1868, which has the distinction of being the first-ever aircraft to be photographed. 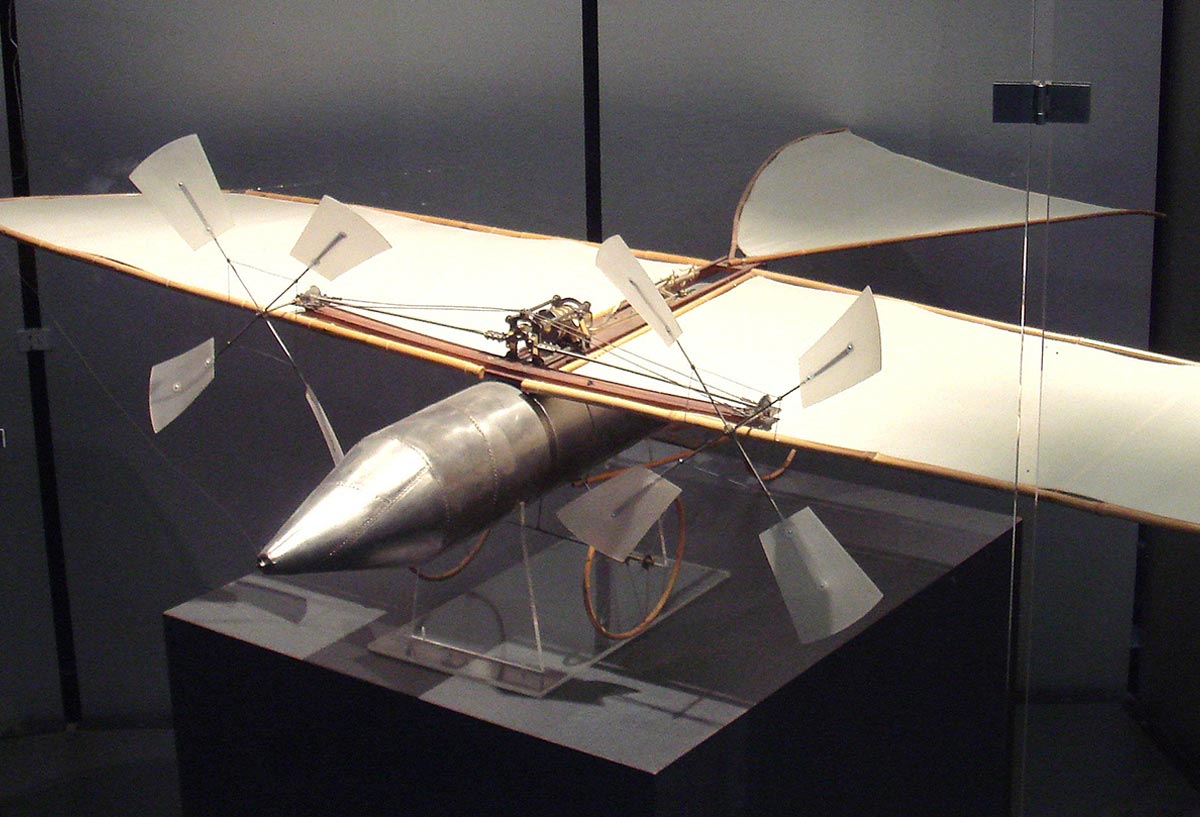 In 1879, the French engineer Victor Tatin created an early airplane that was powered by a compressed-air engine. His flying machine is noteworthy for being the first airplane to take off using its own power after a run on the ground. It was flown tethered to a central pole on a circular track at the military facilities of Chalais-Meudon. 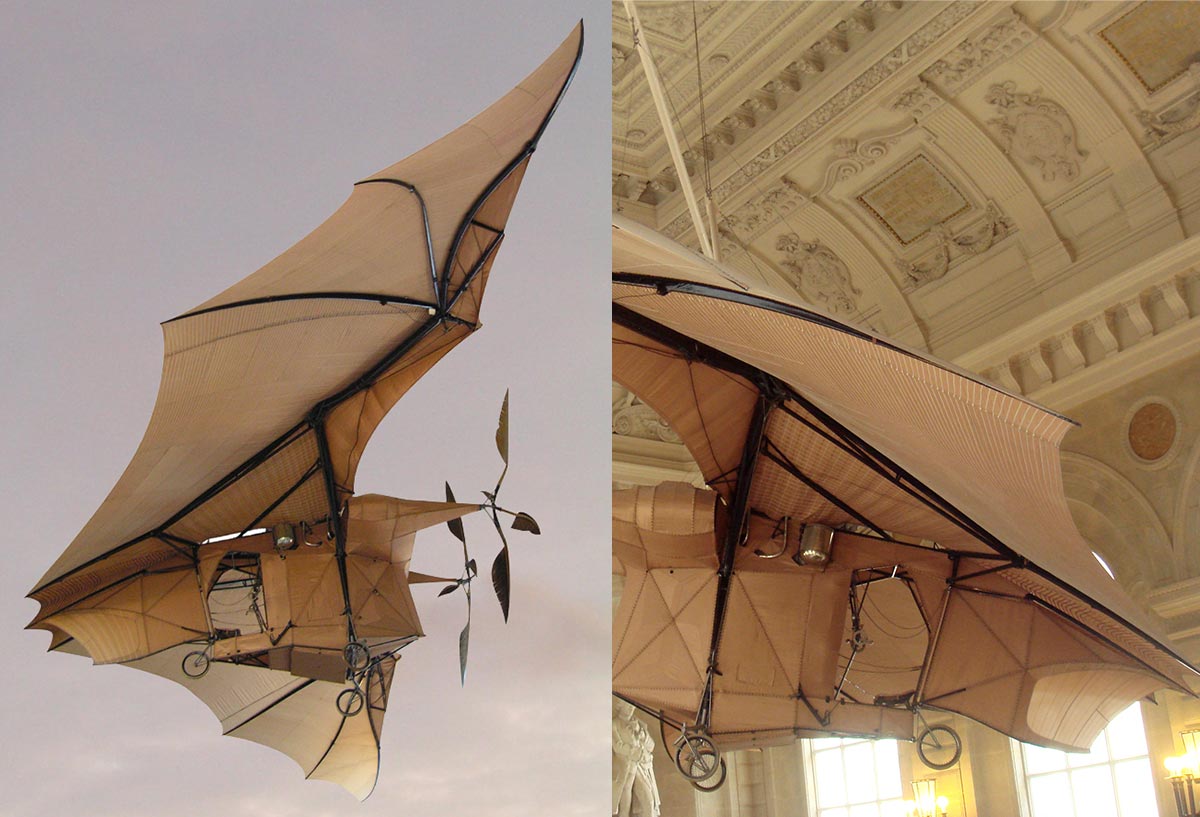 The Avion III was a steam-powered aircraft built by the French inventor and engineer Clément Ader. The design of the wings was inspired by those of a bat. Trials took place in 1897, with the aircraft purportedly briefly taking off on 14 October. Ader later claimed the Avion III had flown a distance of 100 metres. Whether true or not, the demonstrations ultimately failed to impress: funding was pulled and the trials were halted for good.