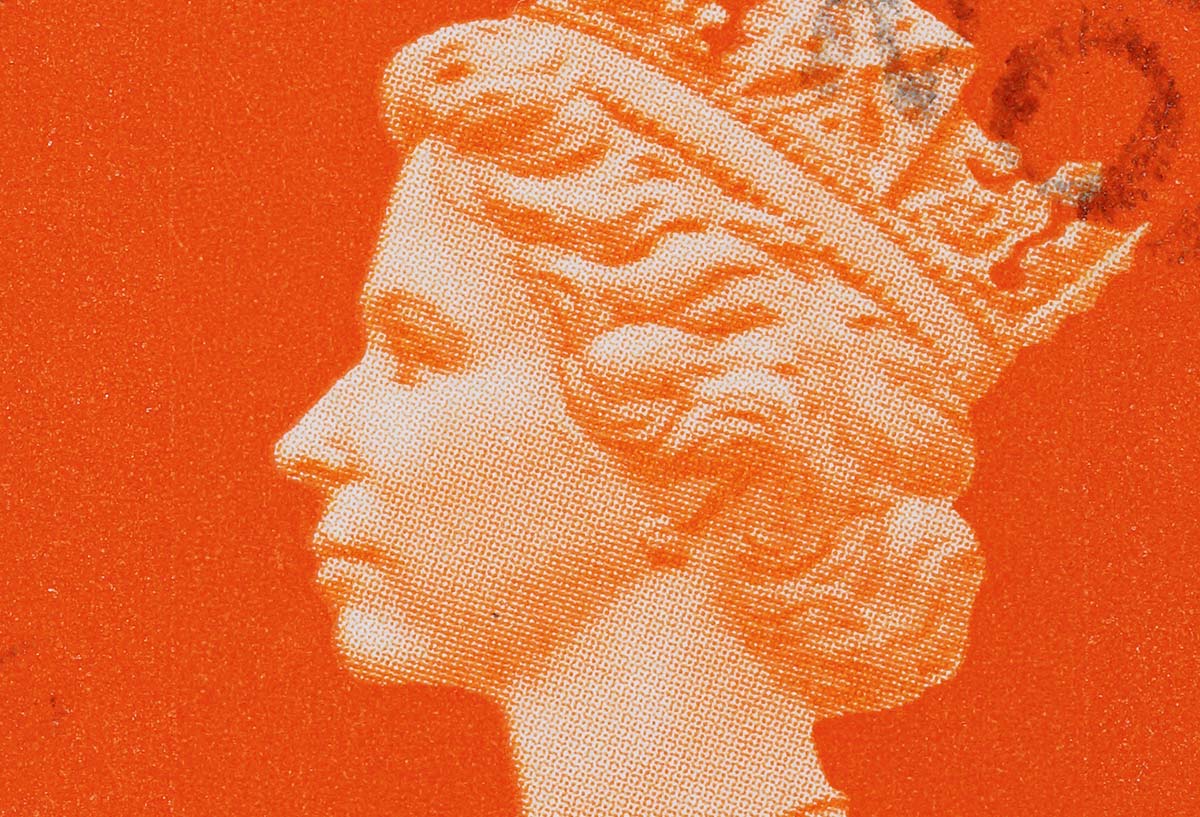 King Henry VIII is best remembered for his wide ranging religious reforms and his six wives, but he was also responsible for founding the Royal Mail in 1516. At the time, letters were sometimes marked with notations such as ‘Haste. Post Haste’ to signify levels of urgency.

Originally, the postal service was not available to the public, though that changed during the reign of King Charles I in 1635. Over the following 200 years, a complicated, confusing and expensive system of tariffs emerged. It was customary to pay for a letter on delivery, with the final price dependent on the distance travelled and number of sheets written. To solve this growing issue, the Royal Mail implemented postal stamps in 1840, a simple yet effective solution conceived of by Sir Rowland Hill.

The first postal stamps set the groundwork for the coming decades, since their design always showcased the current monarch. These became known as ‘definitives’. From time to time, commemorative stamps that featured more varied artwork on them were released. Since Britain was the first country to issue postal stamps, the name of the country is absent on them to this day. Today, stamps are an integral part of everyday life.

Read on for more on the fascinating history of British stamps in pictures. 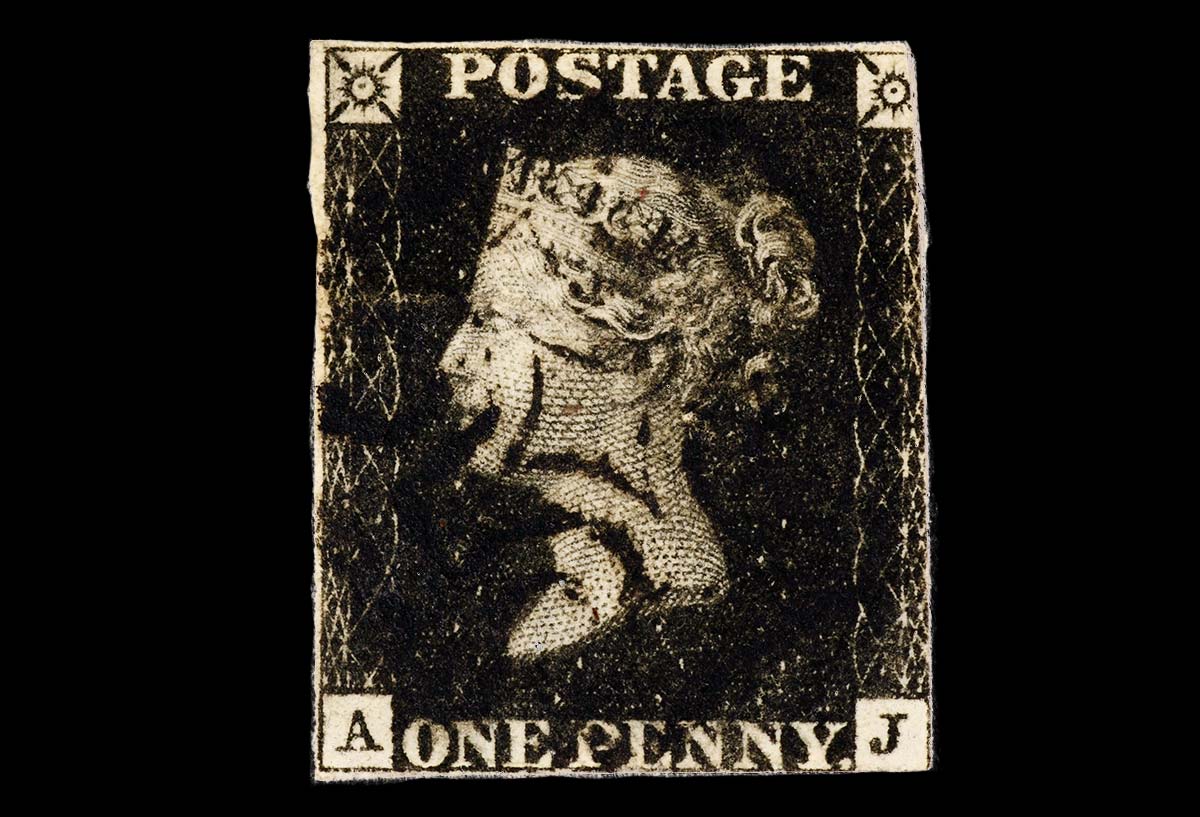 On 6 May 1840, the worlds first adhesive postage stamp – the Penny Black – was issued by the United Kingdom. The original black colour was quickly found to be impractical, since any cancellation mark would be hard to see. Future stamps were thus issued in a brick-red colour. 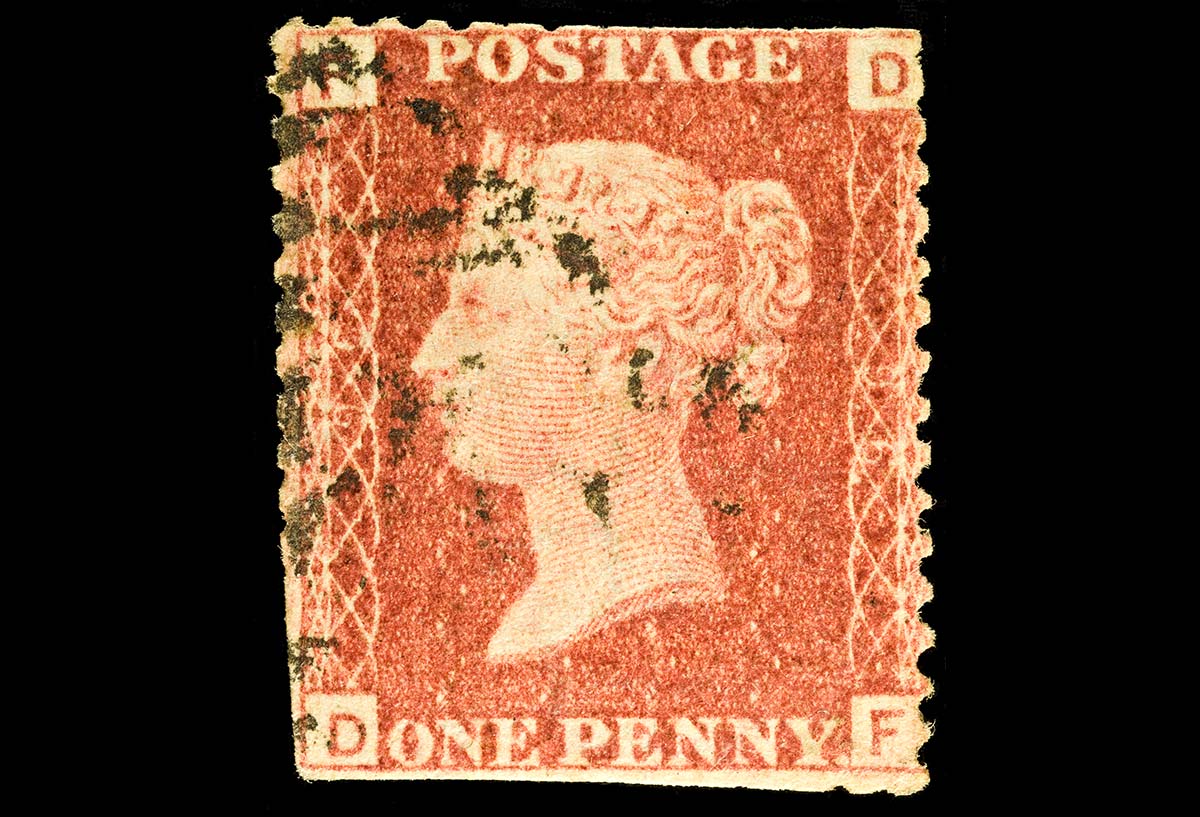 An old Victorian penny red stamp with the portrait of Queen Victoria, circa 1858

The portrait of Queen Victoria remained constant on stamps throughout her reign in Britain, though there are varied depictions of the monarch on different Commonwealth stamps. Some of these were quite inaccurate and sometimes even unflattering. 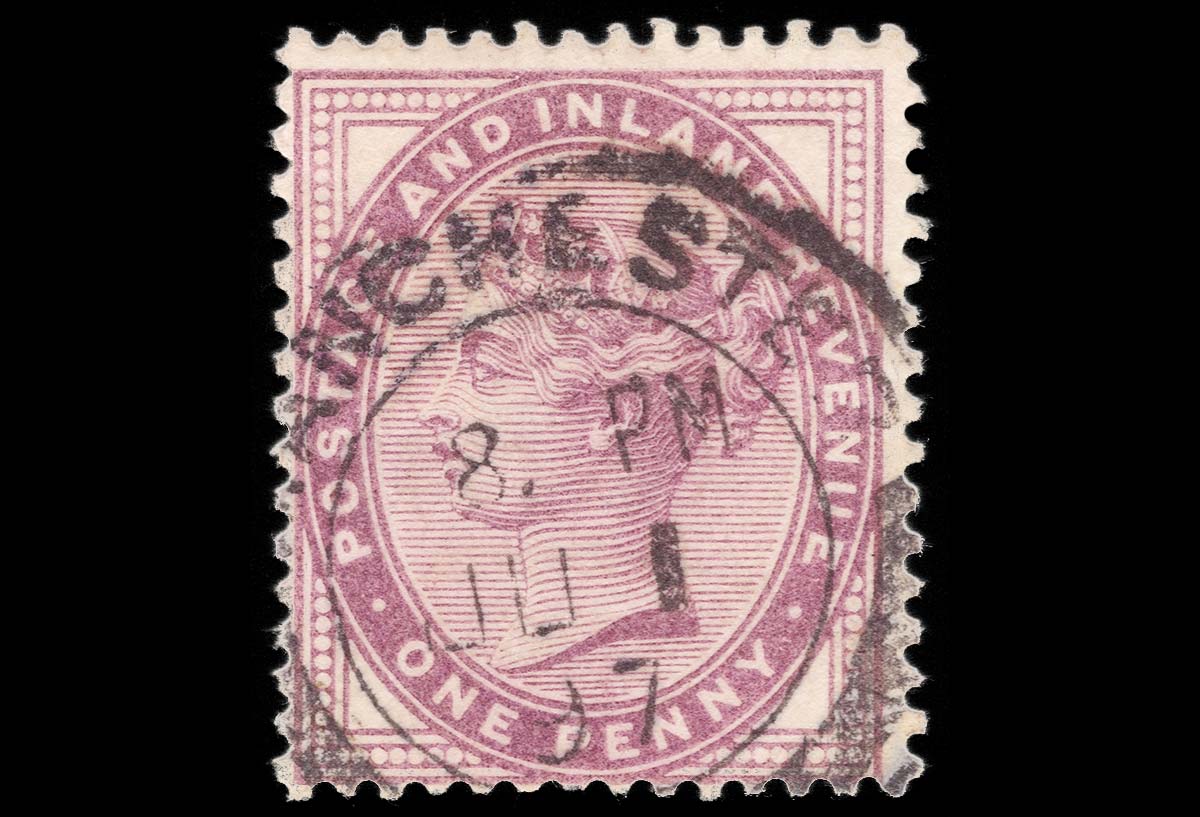 One of the most commonly used stamps was the Penny Lilac, first issued in 1881. In 20 years, over 33 billion were printed and released to the public. 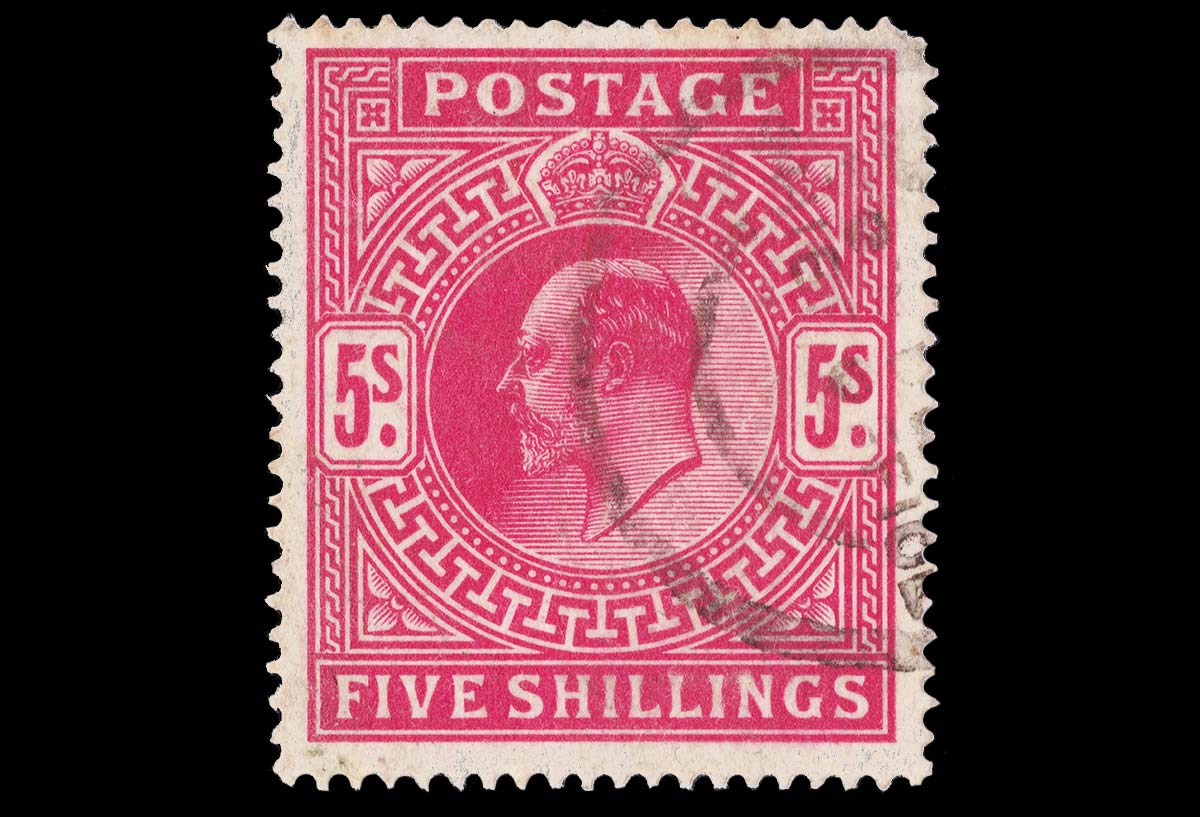 With the death of Queen Victoria and the ascendance of King Edward VII, new stamps were needed. The new designs did not differ too much from earlier ones, with the King’s side profile remaining the main feature. During the 1910s, chalk-surfaced paper was introduced, making it more difficult to remove a postmark without damaging the stamp. 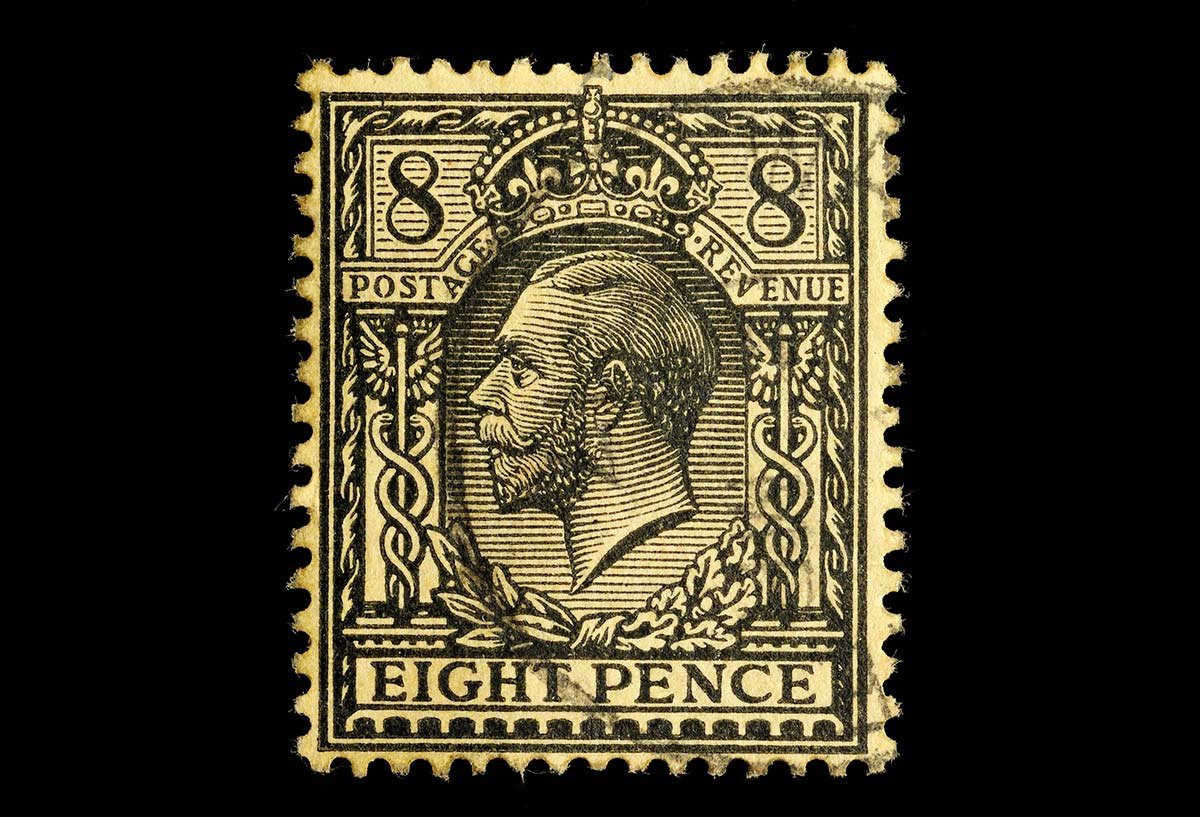 The reign of King George V saw the arrival of the first commemorative stamps to celebrate the opening of the British Empire Exhibition in 1924. 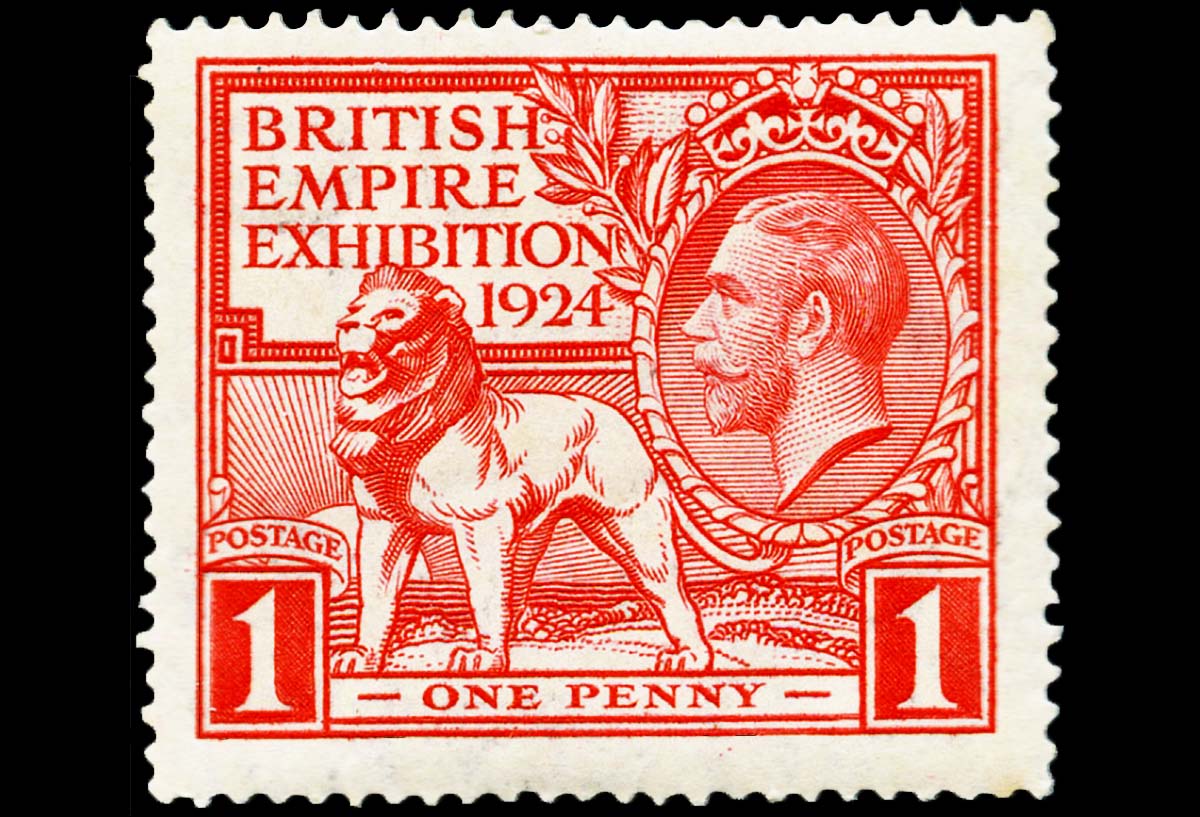 Stamp for the British Empire Exhibition in 1924 (edited)

Following the death of the King in 1936, Edward VIII took over the royal duties for almost a year before his abdication in December the same year. Only four sets of postage stamps were issued during his short reign. 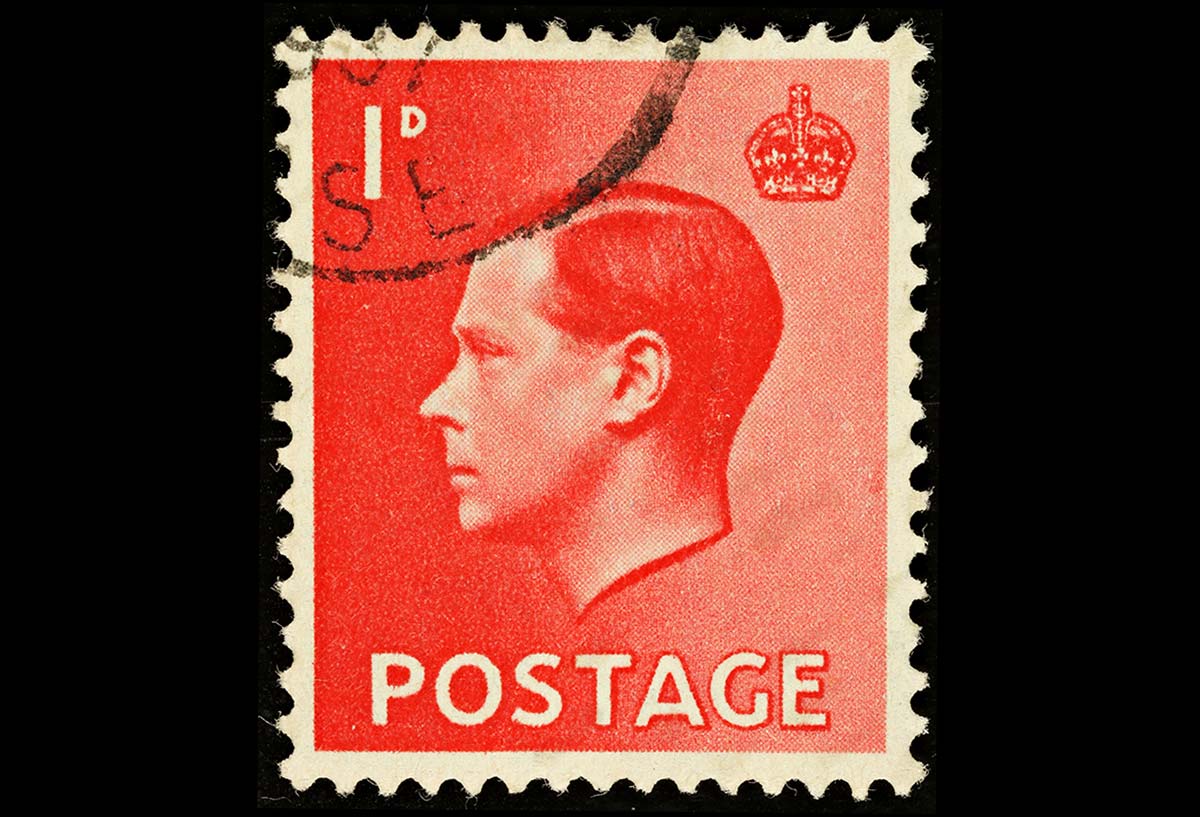 An English One Pence Red used postage stamp showing the portrait of King Edward VIII, circa 1936

Owing to the abdication, the production of commemorative stamps to celebrate the crowning of Edward VIII had to be halted immediately. Against a very tight deadline, the Royal Mail quickly began coming up with designs for the new King’s stamp. 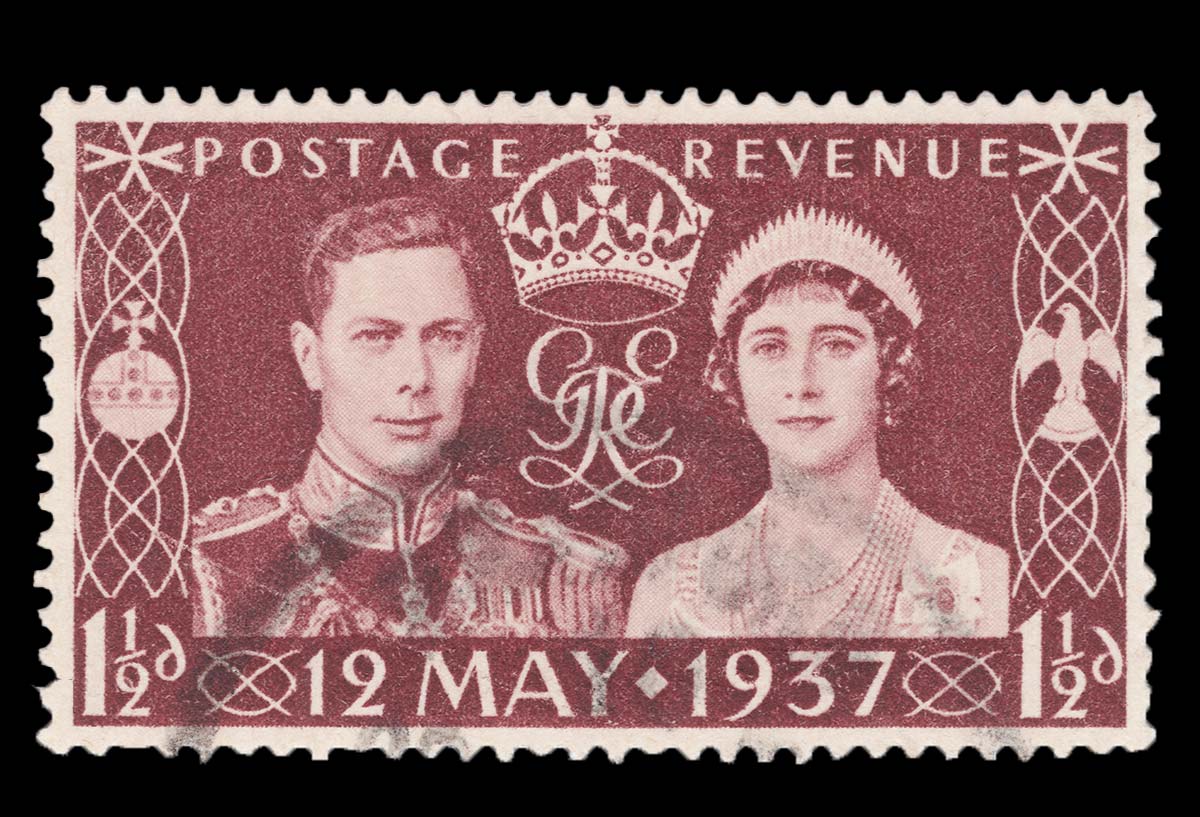 A one and half pence purple-brown postage stamp showing portraits of King George VI and Queen Elizabeth. 1937

To celebrate 100 years since the release of the Penny Black, a commemorative stamp was released depicting Queen Victoria together with King George VI. The idea was originally abandoned with the outbreak of World War Two, but it was quickly resumed. 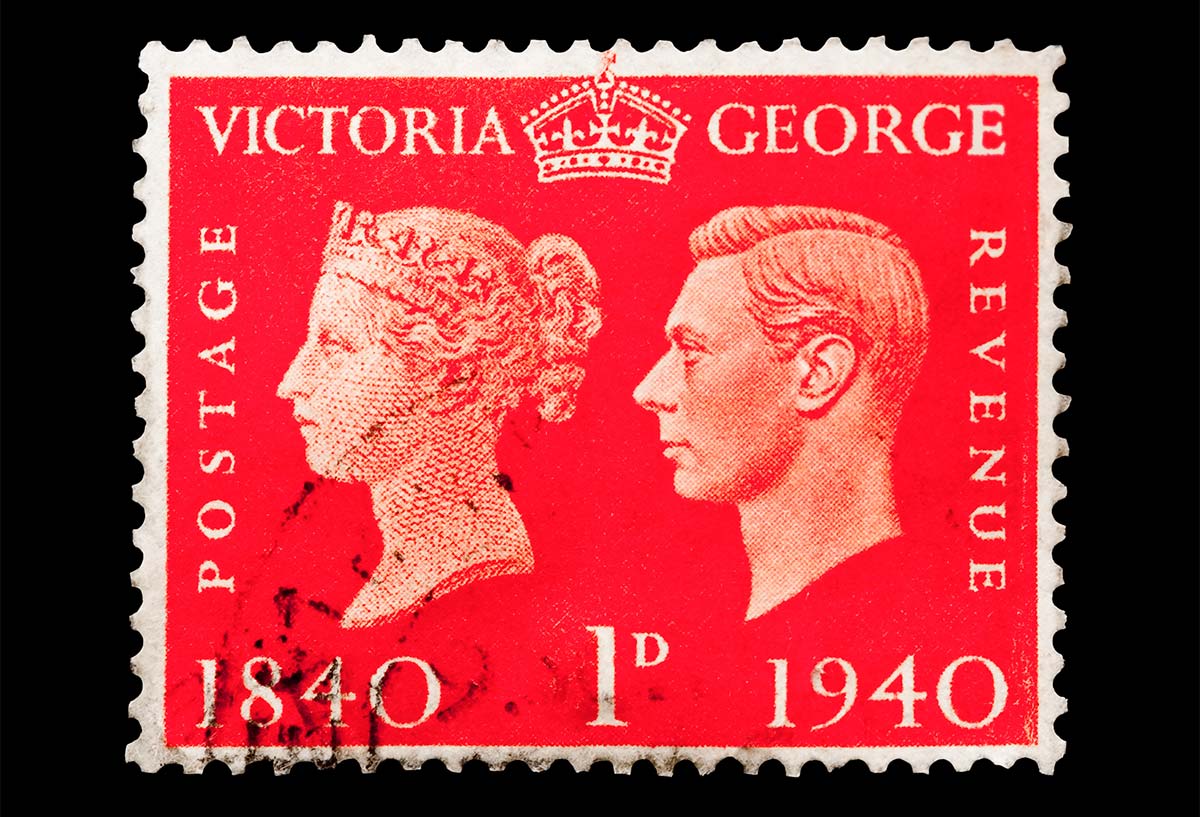 The Channel Islands were under German occupation for most of the war. Their liberation took place in 1945, and a special stamp was released to commemorate this historic moment and to revitalise the tourism sectors of Guernsey and Jersey. 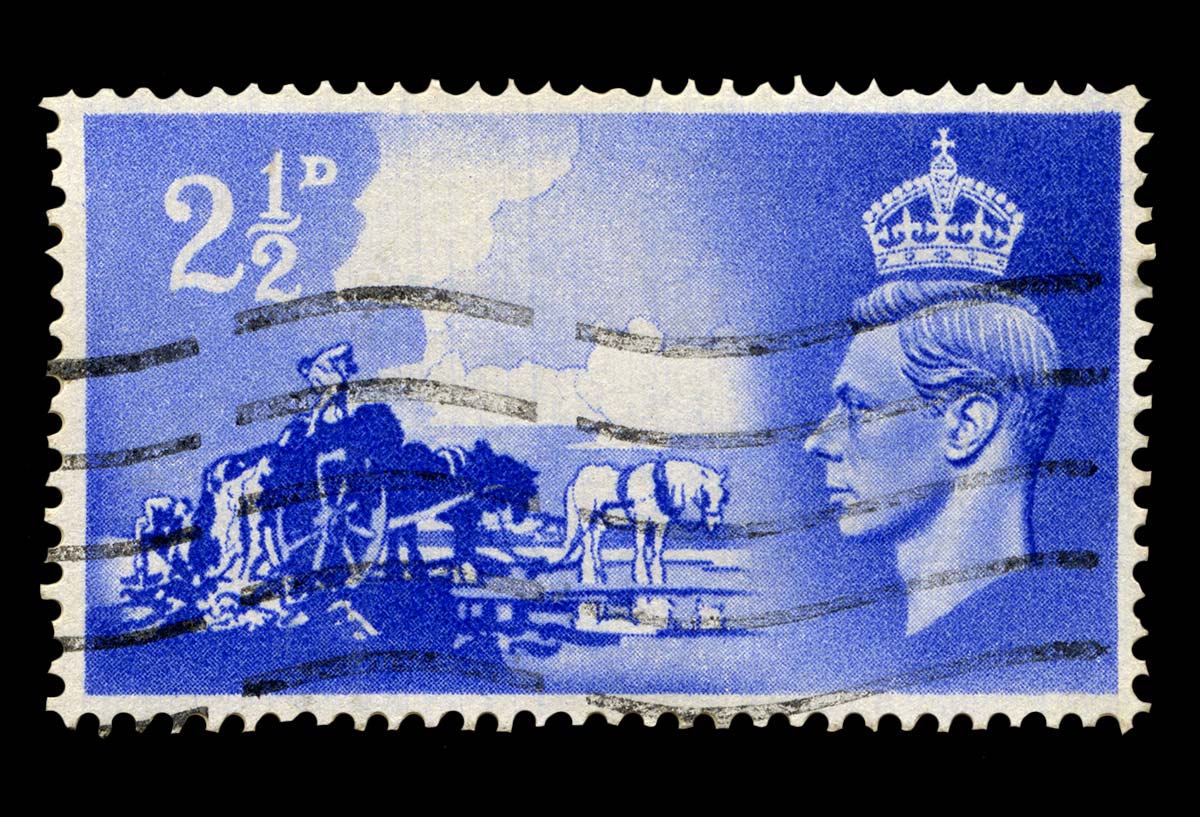 A vintage British postage stamp commemorating the liberation of the Channel Islands after the Second World War, circa 1948

When Elizabeth became the head of state following her father’s death in 1952, a collection of stamps based on a portrait taken by photographer Dorothy Wilding were released. These ‘Wilding issues’ were produced until 1967. 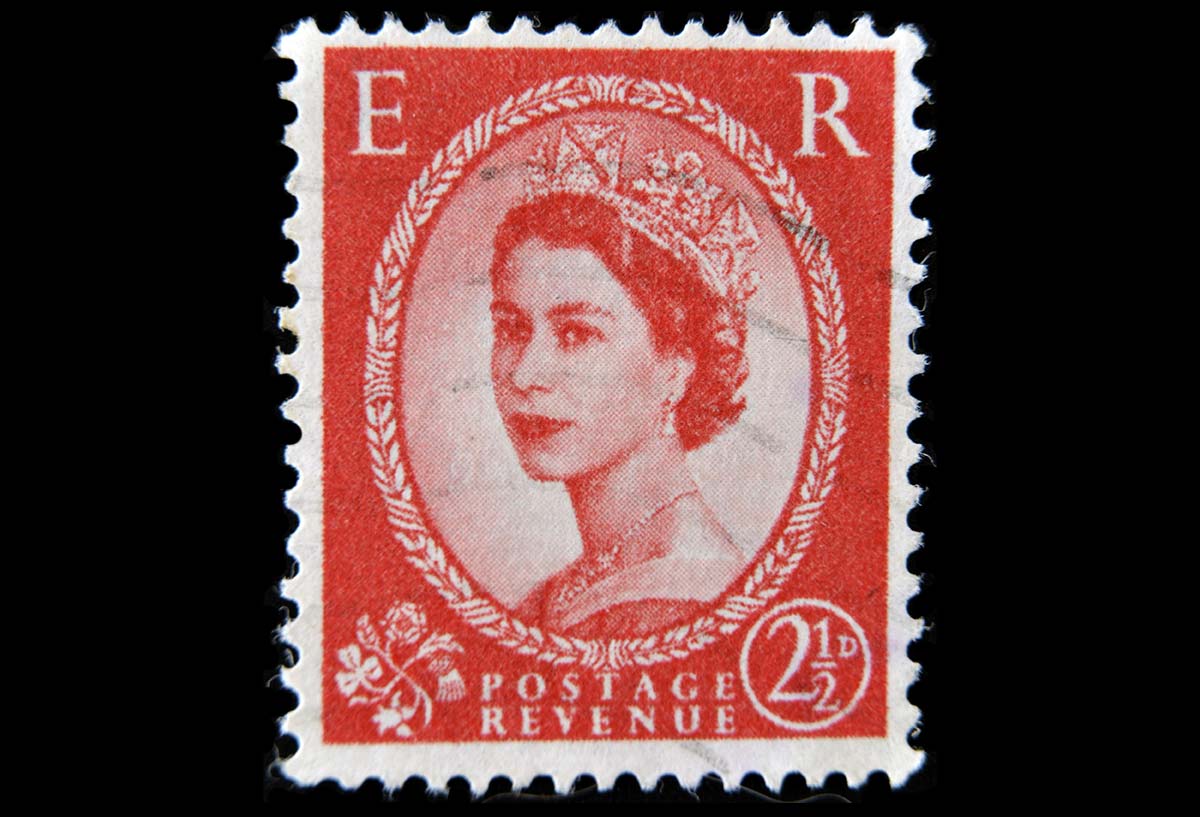 A stamp printed in Great Britain showing a portrait of Queen Elizabeth II, circa 1952

Following 1967, the highly popular ‘Machin series’ were launched. For the next five decades they remained in production, becoming some of the most used stamps in history. As with many previous entries on our list, they were produced in many different colours. 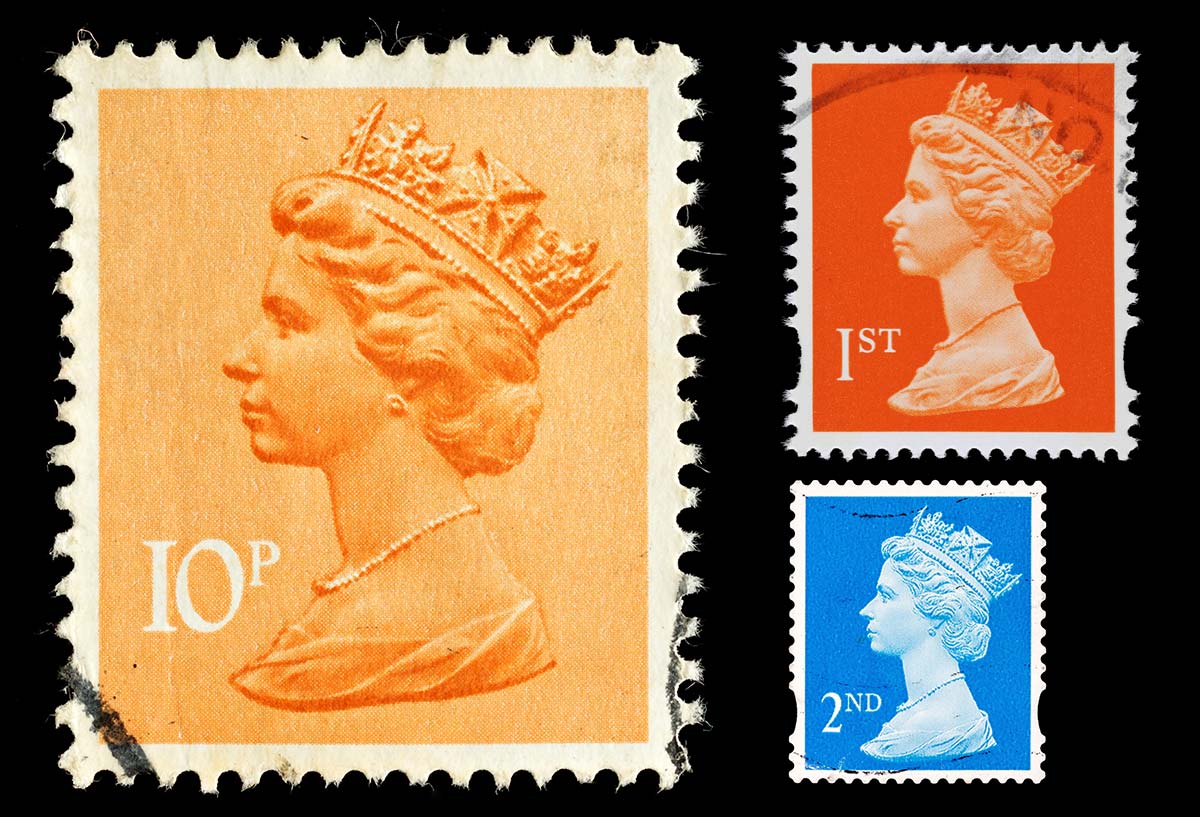 In 1989, the Royal Mail stopped issuing stamps with a specific value on them. Instead they opted to have first and second class ones to avoid replacing them every time postage rates changed. The reign of the Queen also saw a new diversity of imagery on commemorative British stamps, showcasing other members of the Royal Family, ships, historical figures and more. 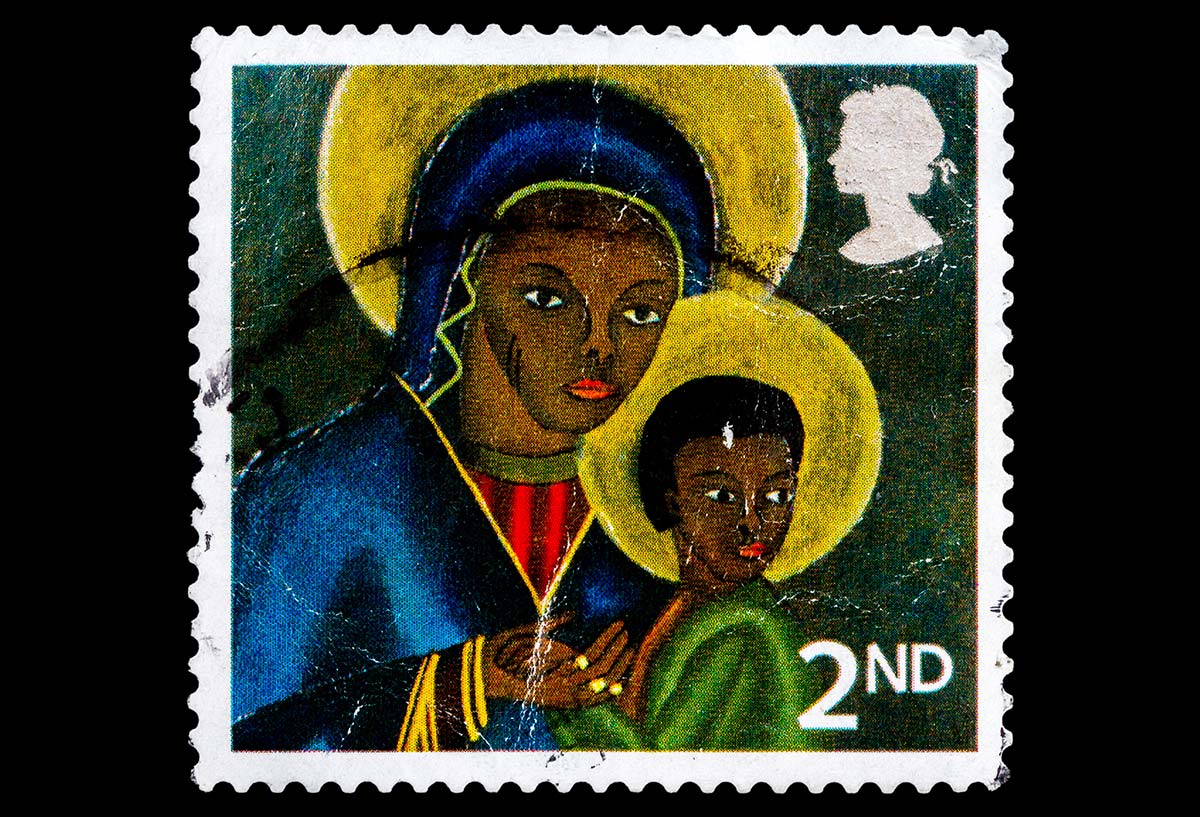 A British postage stamp from 2005

Following the death of Queen Elizabeth II in 2022, a newly-designed stamp marking King Charles III’s reign has been on sale since 10 November 2022.