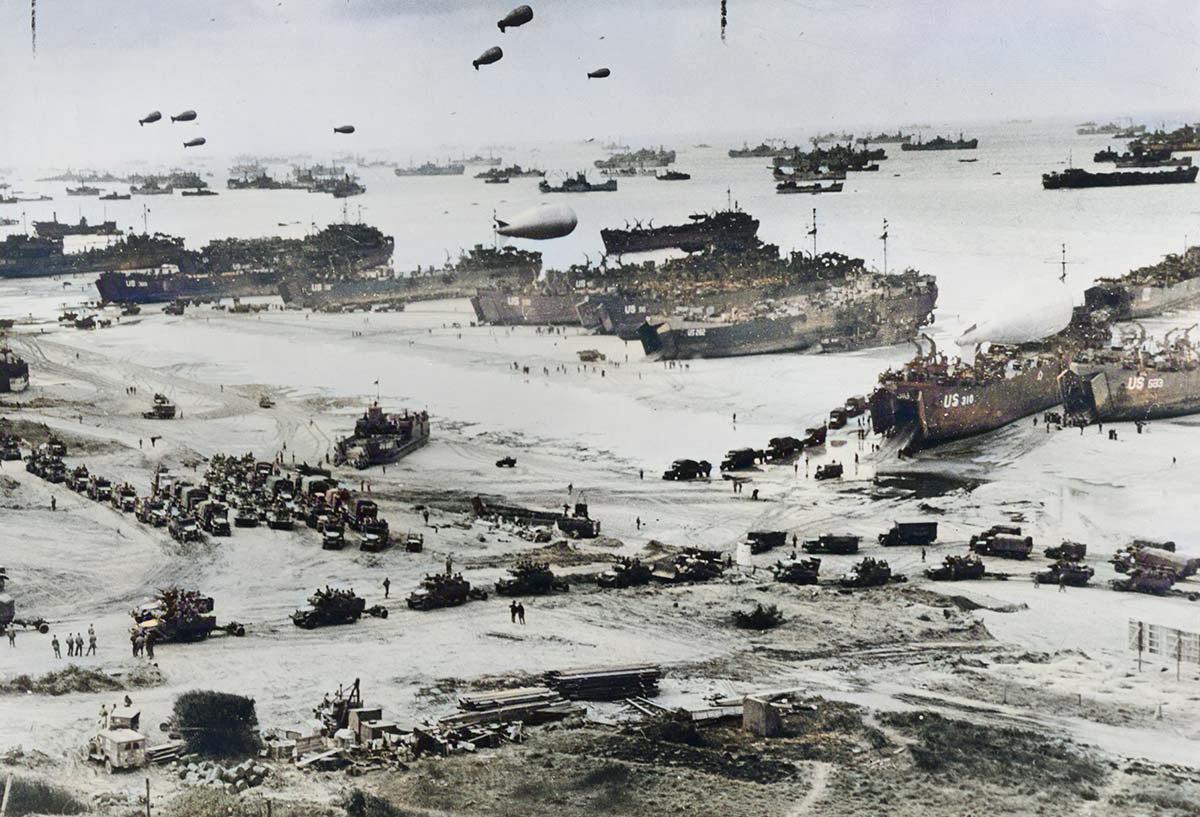 On 6 June 1944, the largest seaborne invasion in history began. Stalin had been demanding the opening up of a second front in Western Europe for some time. Up to that point, most of the devastating fighting of World War Two’s European theatre had taken place in Soviet-held territories, where the Red Army fiercely fought against the Wehrmacht.

In May 1943, the British and Americans successfully defeated the German forces in North Africa, then turning to the invasion of Italy in September 1943. Less than a year later, in June 1944, the Allied powers opened up a front in France. The Normandy landings – then known as Operation Overlord and now often referred to as D-Day – ushered in the eventual defeat of Hitler’s Nazi regime. With losses on both the Eastern Front and now the Western Front too, the Nazi war machine could not keep up with the approaching Allied forces.

It was one of the most pivotal military operations in history. Here’s a look at D-Day through a series of remarkable photographs. 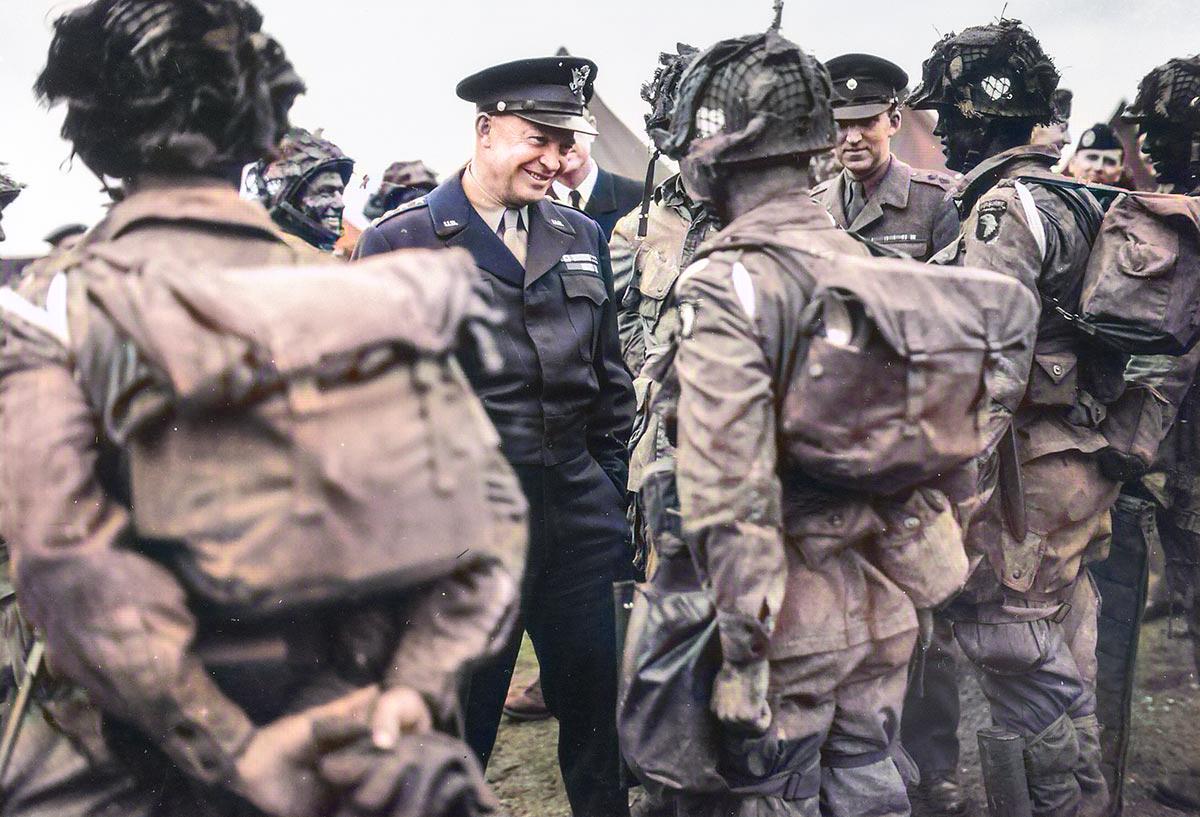 Photograph of General Dwight D. Eisenhower giving the order of the day, 6 June 1944.

During the planning of D-Day, US President Franklin D. Roosevelt designated General Dwight D. Eisenhower to be the commander of the entire invasion force. 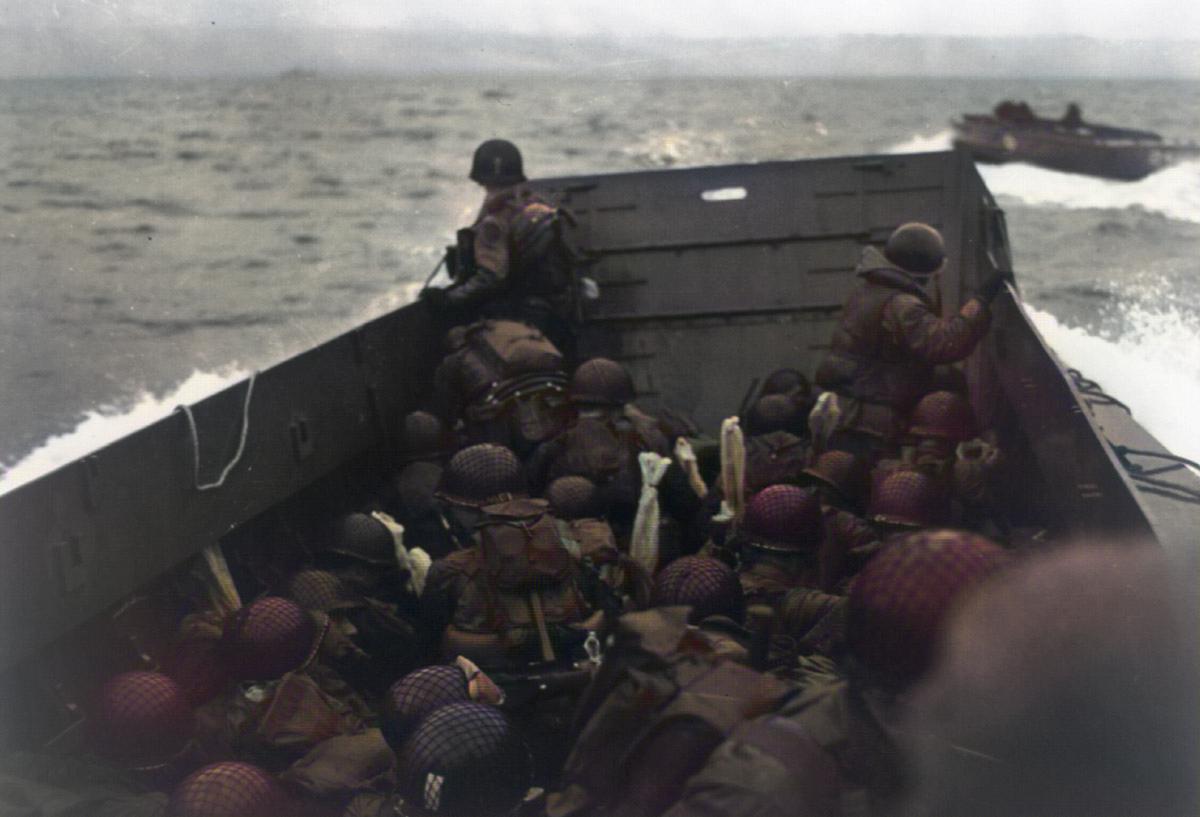 US soldiers being carried towards Normandy, 06 June 1944 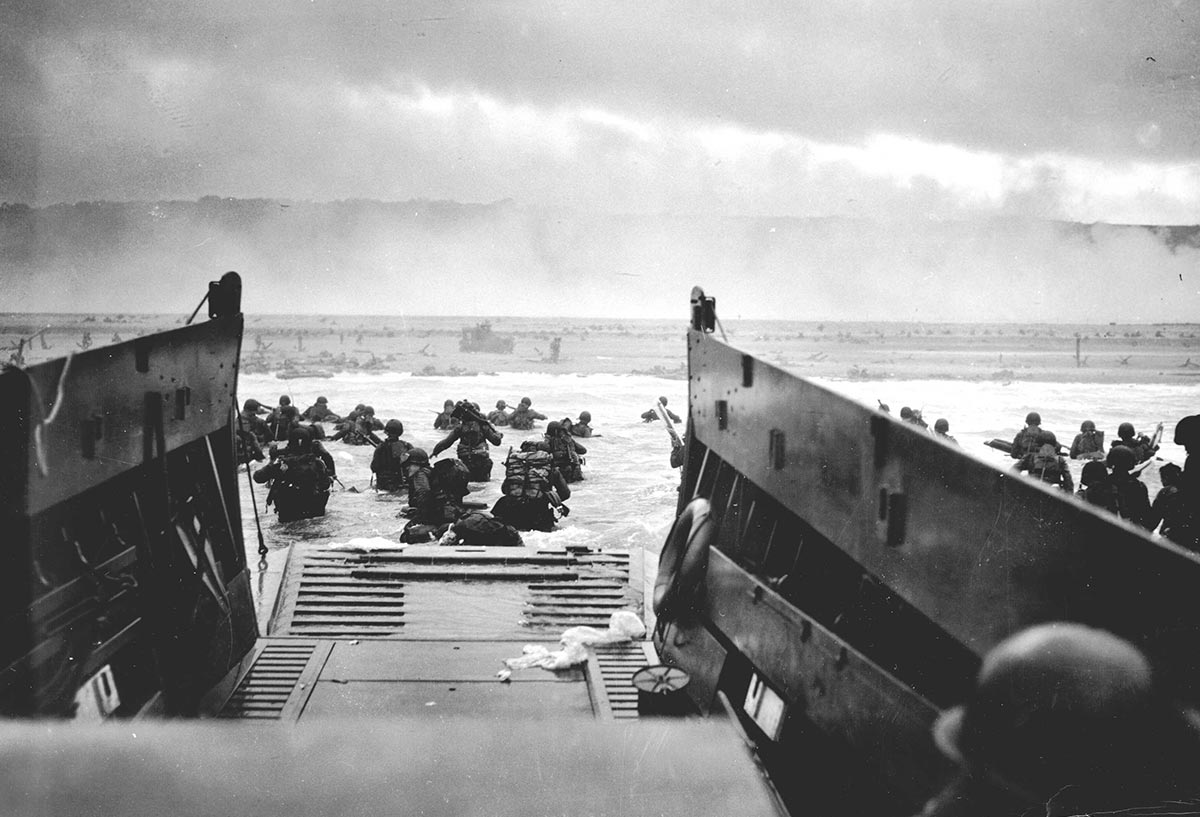 Personnel from the U.S. Coast Guard-manned USS Samuel Chase disembarks troops of the U.S. Army’s First Division on the morning of 6 June 1944 (D-Day) at Omaha Beach.

Some 3,000 landing craft, 2,500 other ships and 500 naval vessels began discharging 156,000 men onto the beaches of Normandy. It was not only American and British troops that took part in the amphibious assault, but also Canadian, French, Australian, Polish, New Zealand, Greek, Belgian, Dutch, Norwegian and Czechoslovakian men. 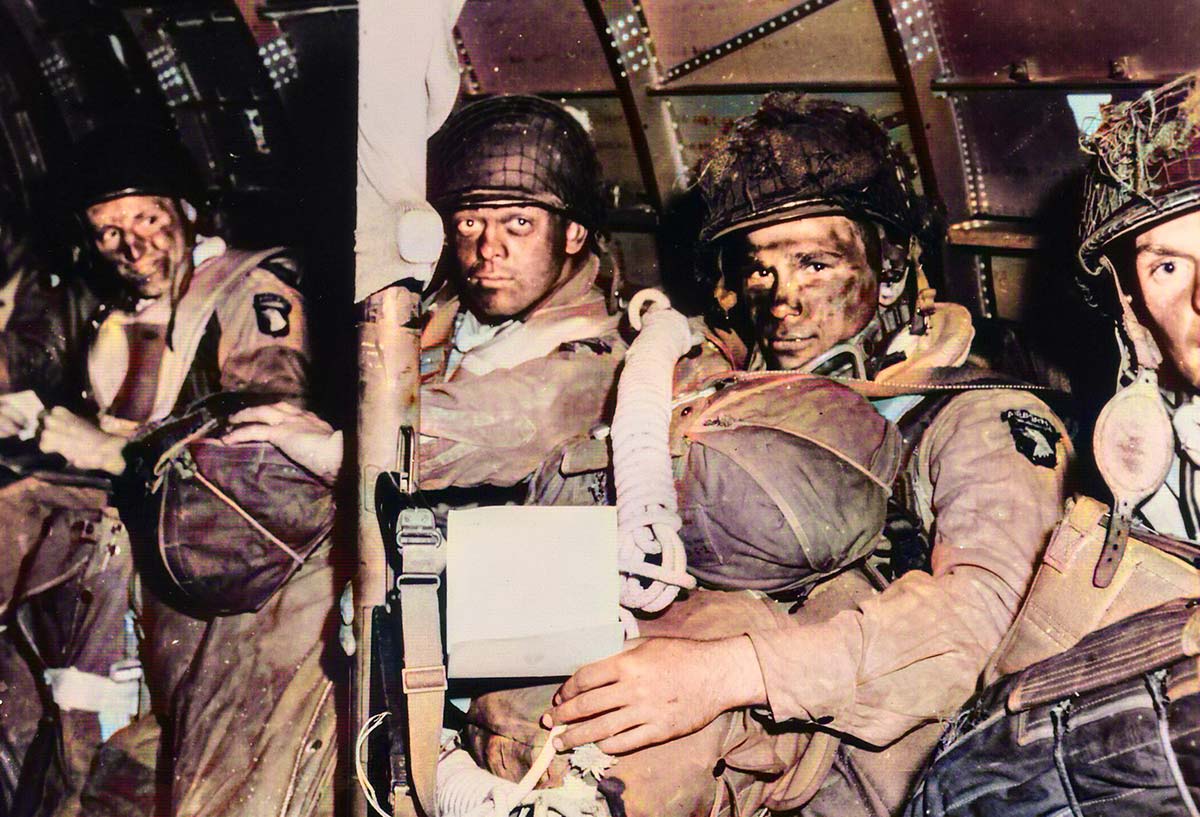 Photograph of paratroopers just before they took off for the initial assault of D-Day, 06 June 1944

The invasion not only utilised the Allies’ superior naval capabilities but also their air fleets. Fighter planes played a crucial role in the campaign’s success, with around 13,000 craft taking part in the D-Day operation. Even prior to the transport ships arriving, 18,000 British and American troops had parachuted behind enemy lines. 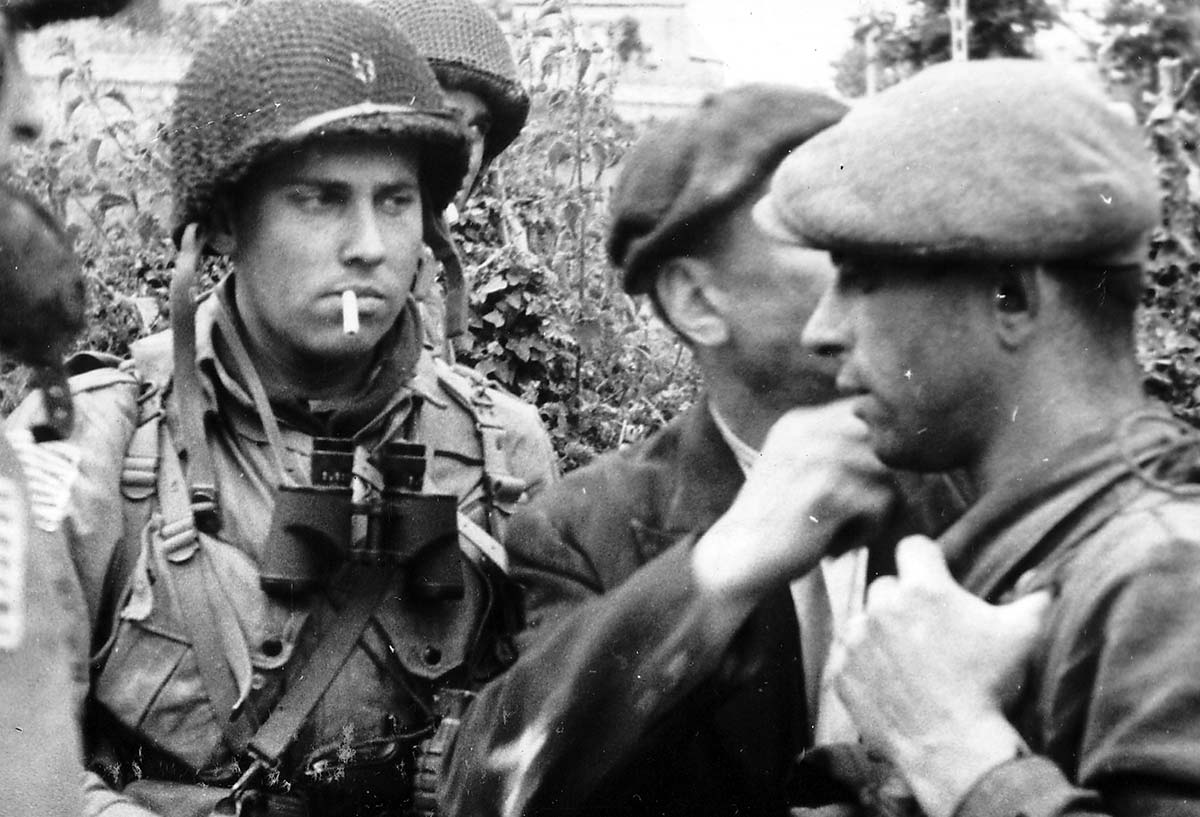 The French Resistance coordinated their actions with the Allied D-Day landings, sabotaging German lines of communication and transport networks. 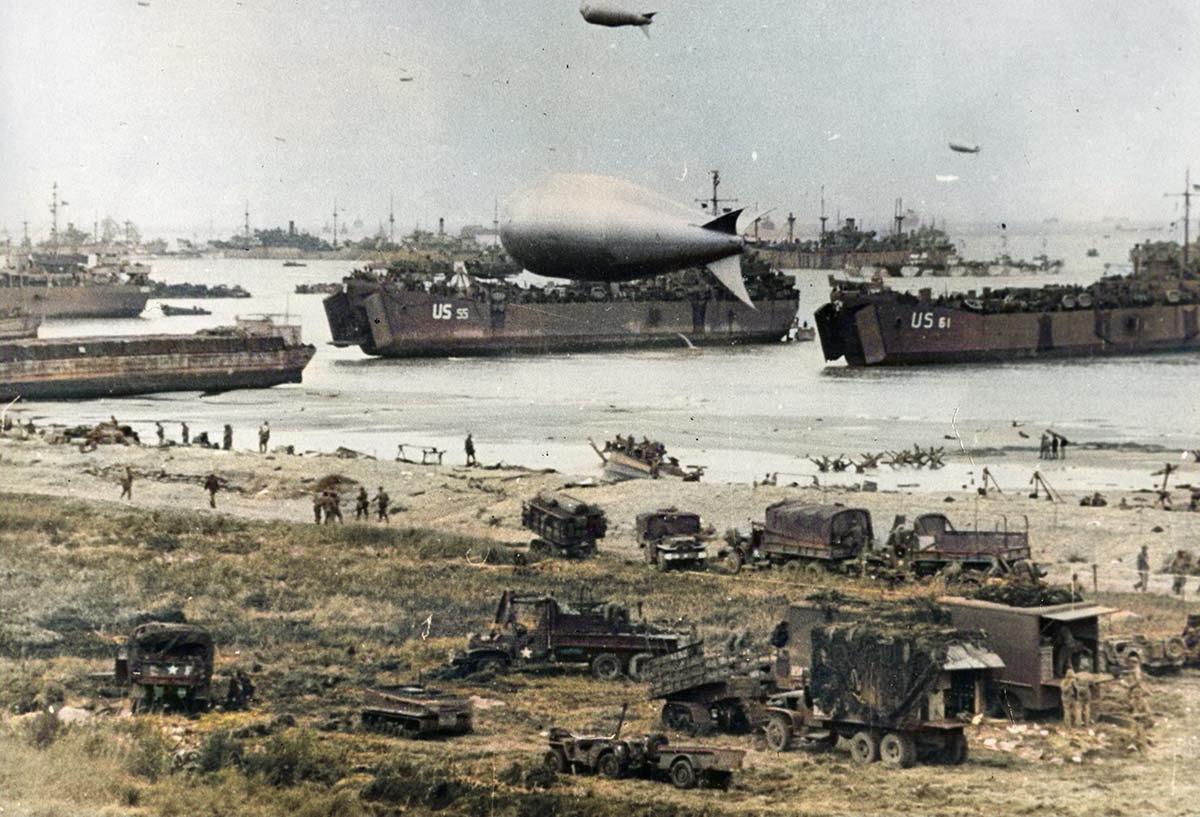 The German troops suffered from serious supply shortages and received few reinforcements. Hitler, meanwhile, did not realize the seriousness of the invasion, believing it to be an Allied attempt to distract the Germans from other military operations. 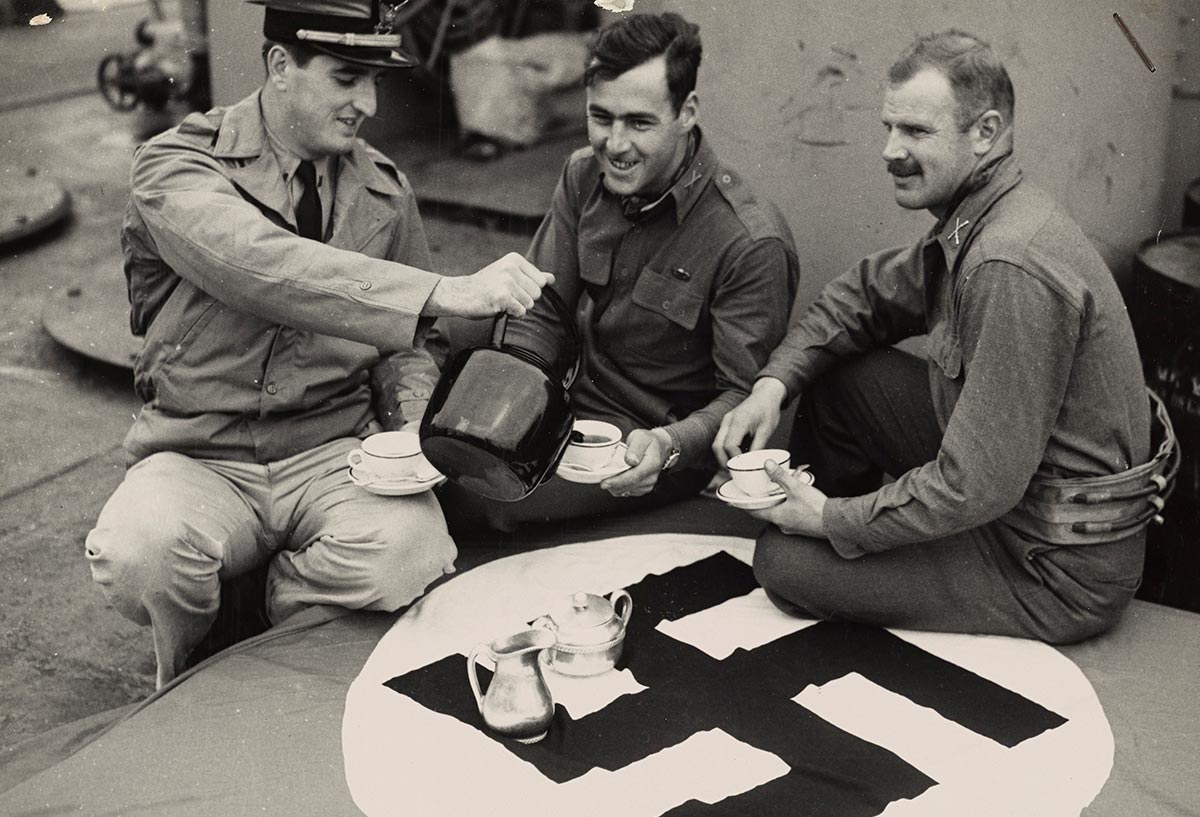 In spite of all of this, the German troops managed to inflict heavy damage on the Allied forces. The number of casualties was high on both sides, with the landing on Omaha beach causing especially grave Allied losses. 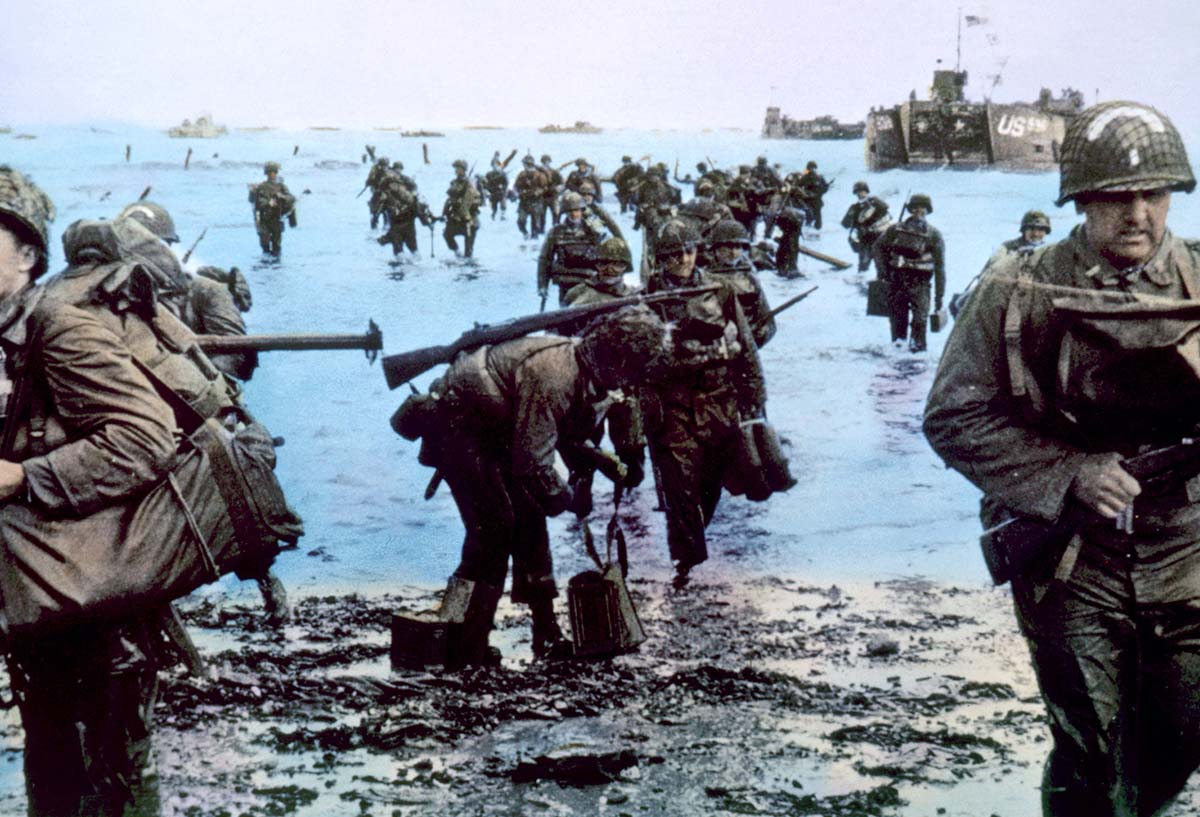 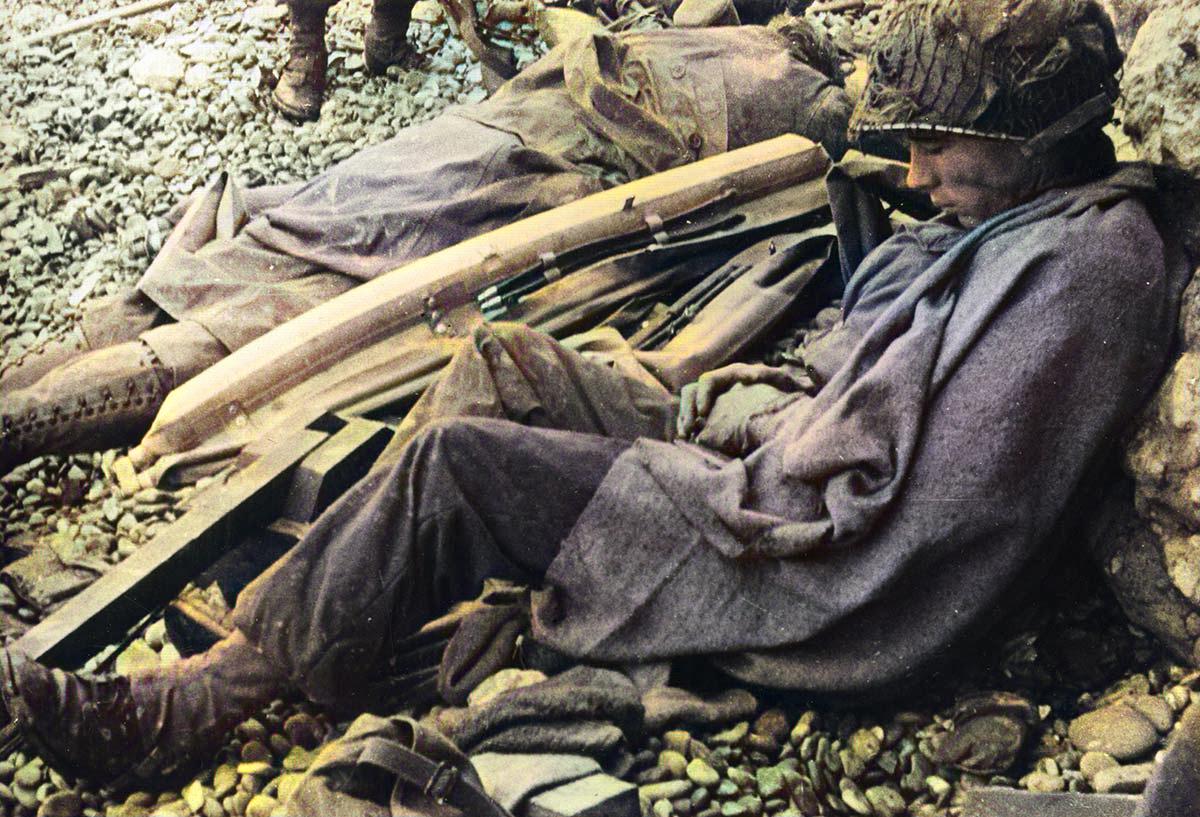 An American soldier of the 3rd Battalion, 16th Infantry Regiment, 1st Inf. Div., takes a ‘breather’ after storming ashore from a landing craft

The Allies failed to achieve any of their key goals on the first day, though they did still make some territorial gains. Eventually, the operation gained a foothold, allowing the Allies to press inland and gradually expand over the coming months. 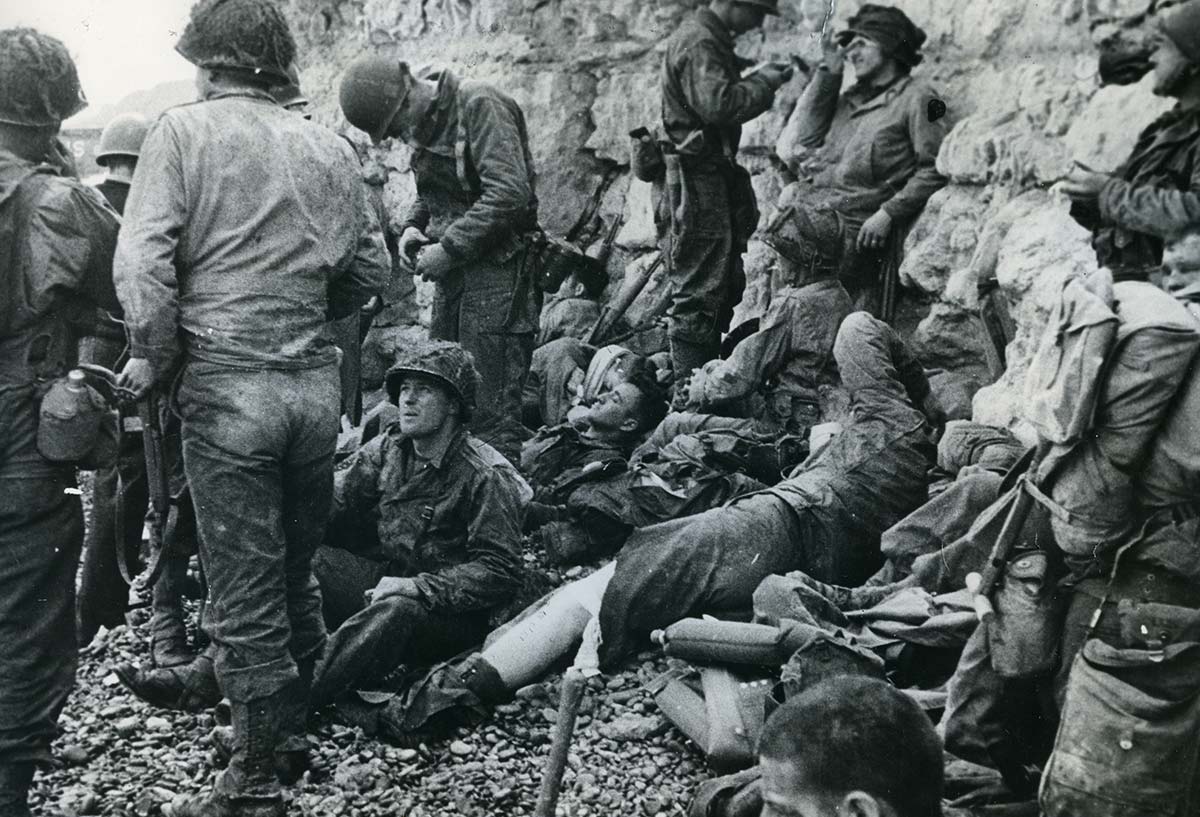 The defeat at Normandy was a significant blow to Hitler and his war plans. Troops had to be kept in France, not allowing him to redirect resources to the Eastern Front, where the Red Army started pushing the Germans back. 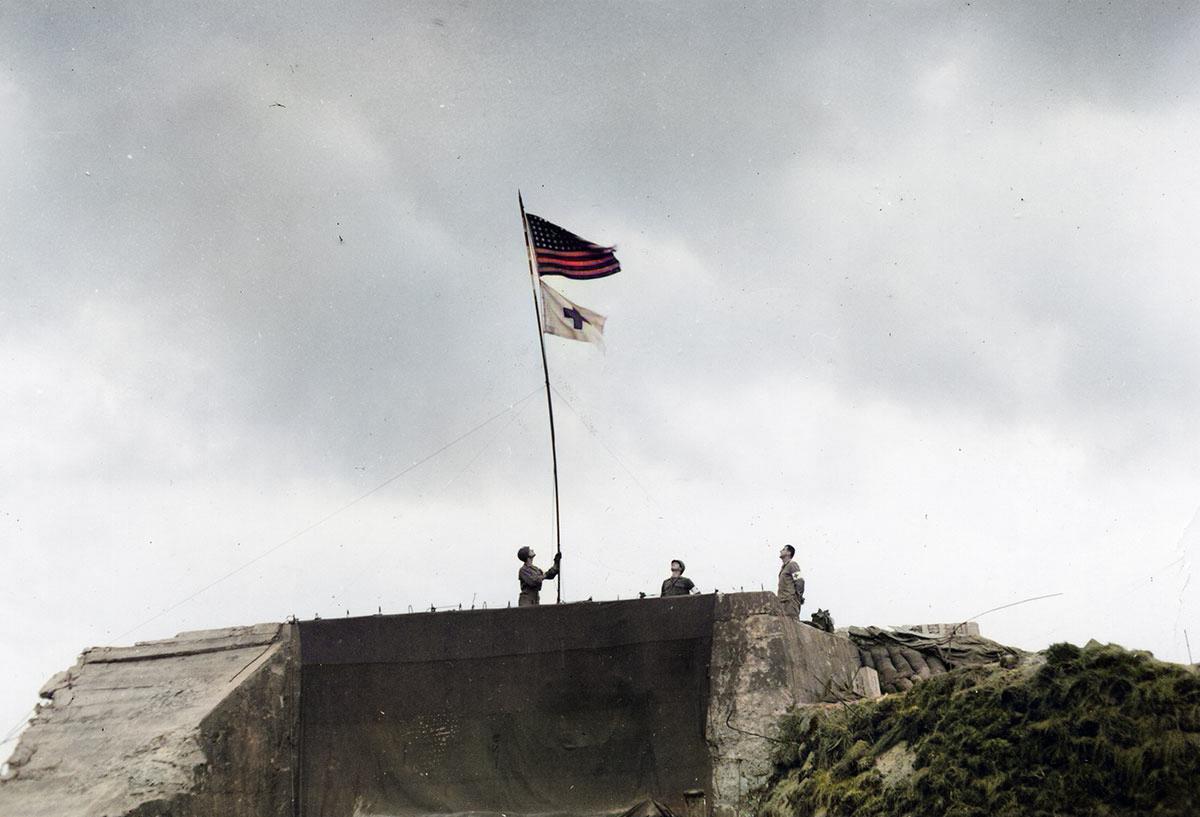 Soldiers raising a flag over a german pillbox, 07 June 1944

By the end of August 1944, northern France was under Allied control. In less than a year, Nazi Germany surrendered. The D-Day landings were pivotal in turning the tide of World War Two and wrenching control from Hitler’s forces.