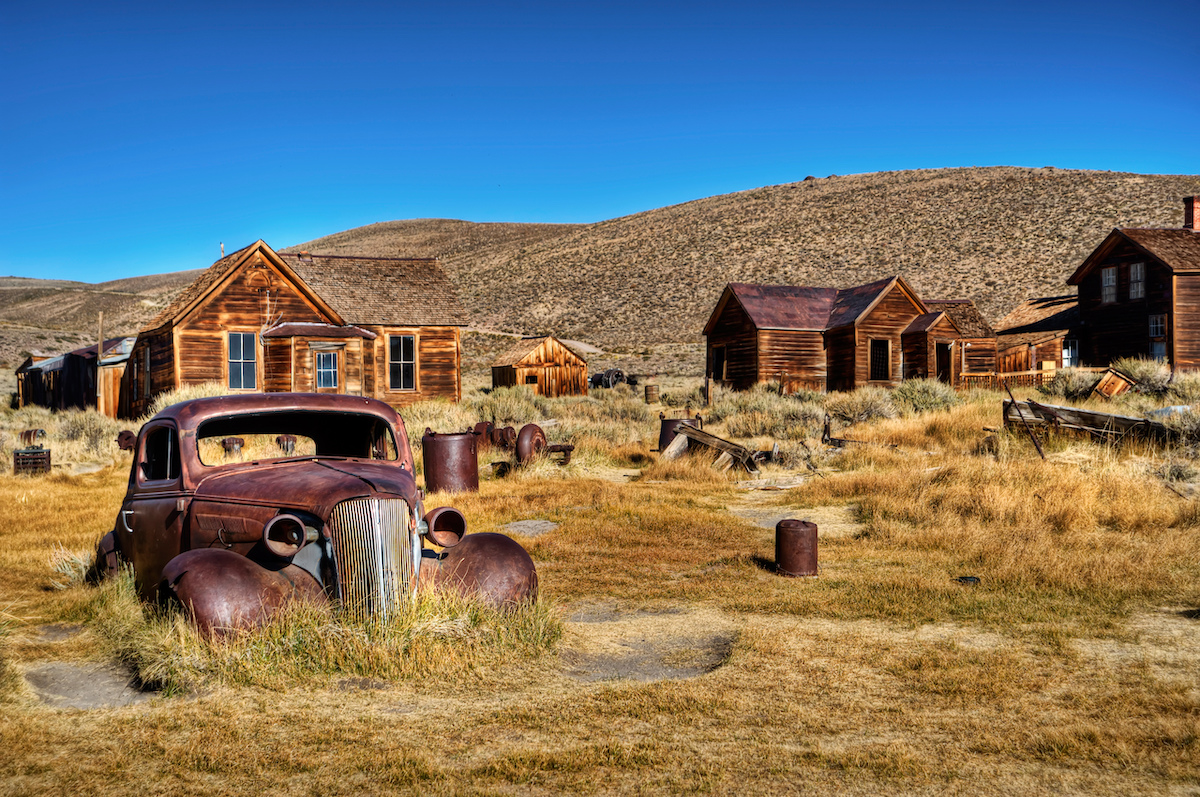 Bodie, California was once a prosperous gold mining town, home to thousands of residents in the 1870s and producing millions of dollars worth of gold a year. But by the 1910s and ‘20s, Bodie’s gold reserves had dried up and the town’s key source of income had vanished. Residents started to flee en masse, abandoning their homes and any belongings they couldn’t carry.

Today, Bodie is eerily preserved in almost the exact state its residents abandoned it in, with roughly 100 structures still standing in the town. Here’s the story of Bodie, California’s notorious Old West ghost town, told in 10 remarkable photos. 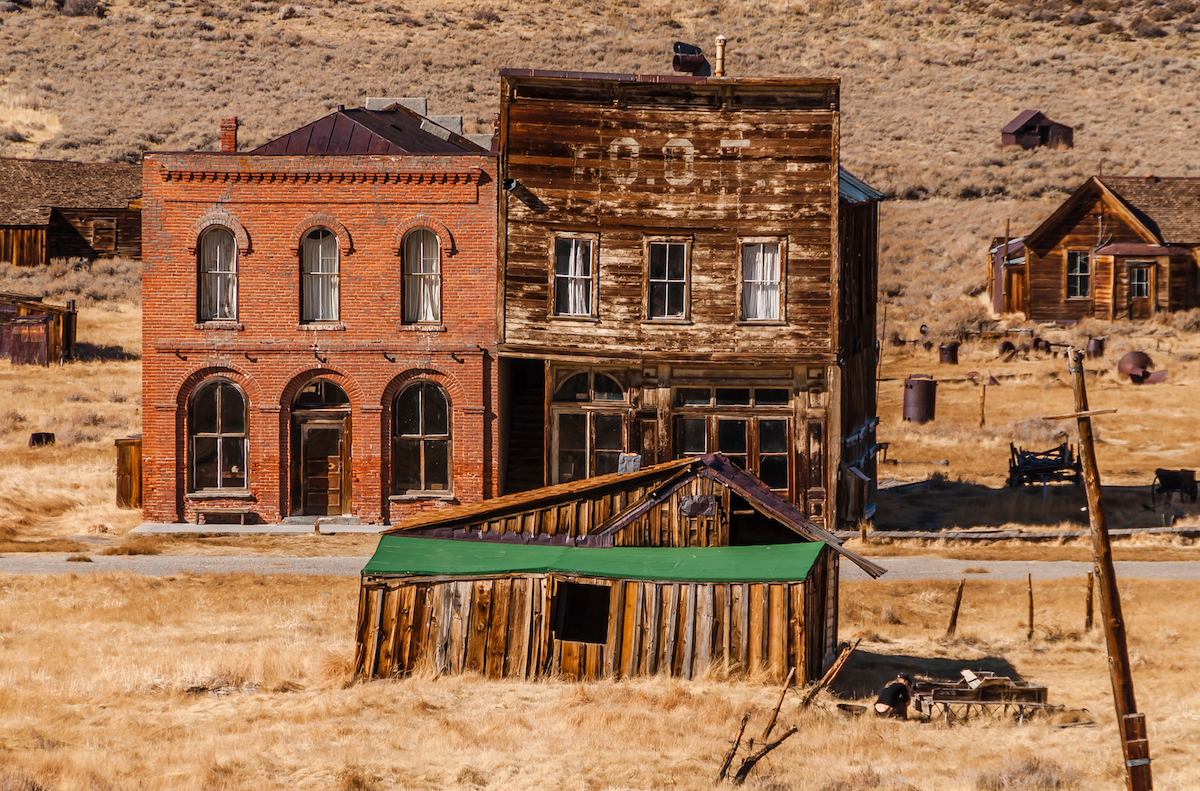 Bodie first emerged in the mid-19th century, when a group of budding gold prospectors struck lucky in a region now known as Bodie Bluff. A mill opened in 1861, and the tiny town of Bodie began to grow.

Bodie in its prime 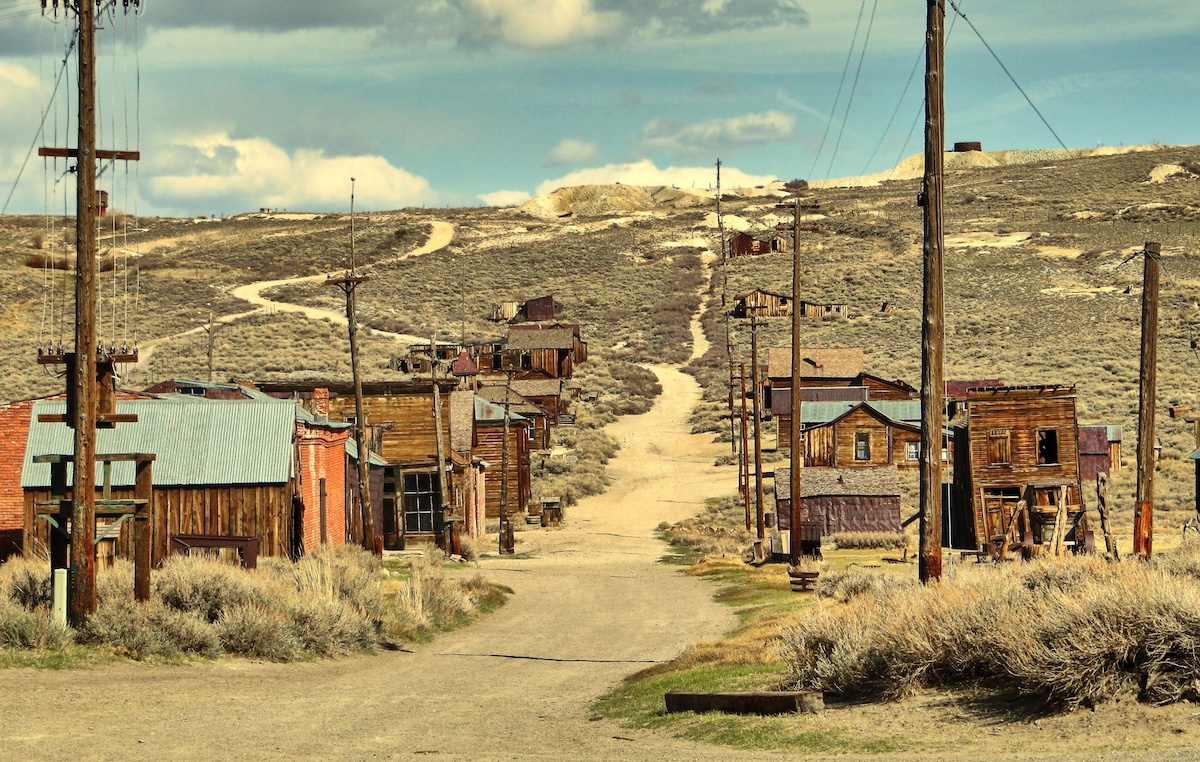 Buildings line either side of a dirt road in Bodie, California.

Despite the initial prosperity of the Bodie gold mines, reserves appeared to be drying up by the 1870s. But in 1875, one of the town’s key mines, known as Bunker Hill, collapsed. The accident turned out to be a stroke of luck for the prospectors of Bodie, however, revealing vast new supplies of gold.

The town’s population rocketed as budding miners flocked to the region in search of employment and riches. Between 1877-1882, Bodie exported some $35 million worth of gold and silver.

A relic of the Old West 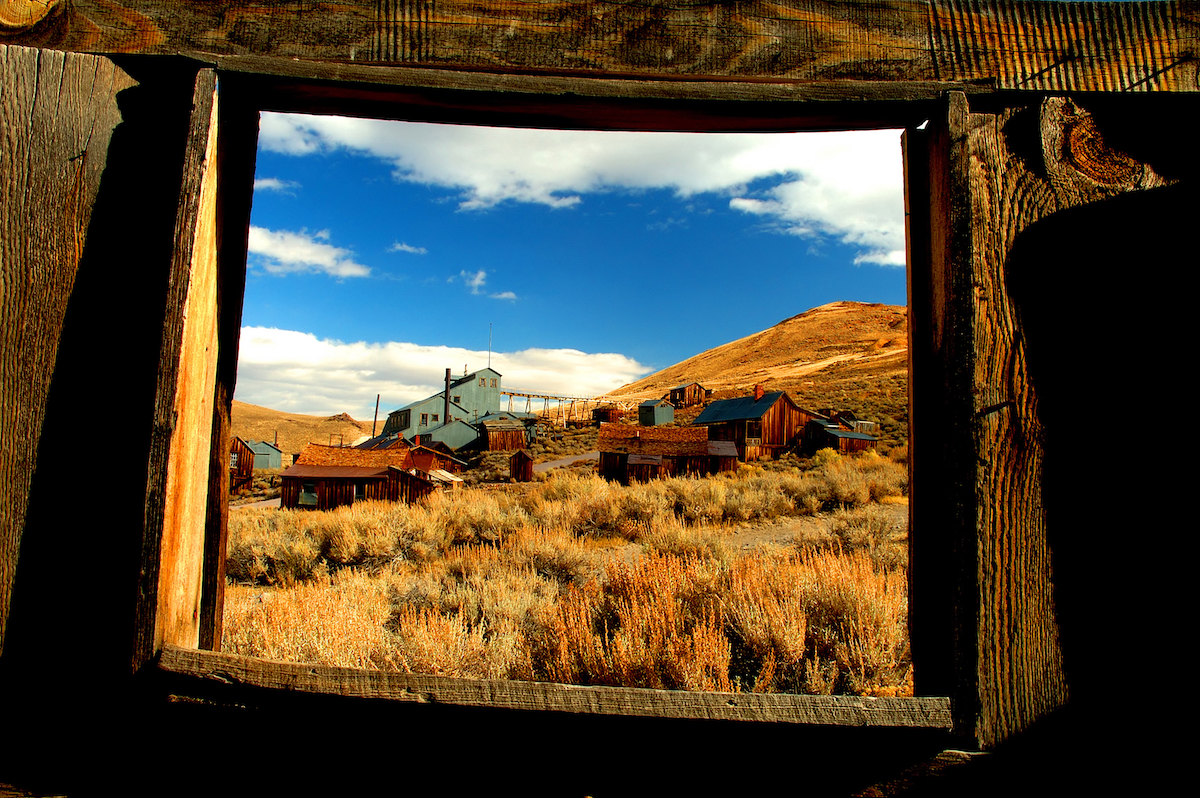 The once prosperous gold mill of Bodie, California, stands in the distance.

Like so many boomtowns of the American Old West, Bodie developed a reputation for lawlessness and criminality, and the town was home to some 65 saloons in its prime. According to some contemporary reports, residents of Bodie would ask each morning, “have we a man for breakfast?”, which essentially meant, “was anybody murdered last night?” 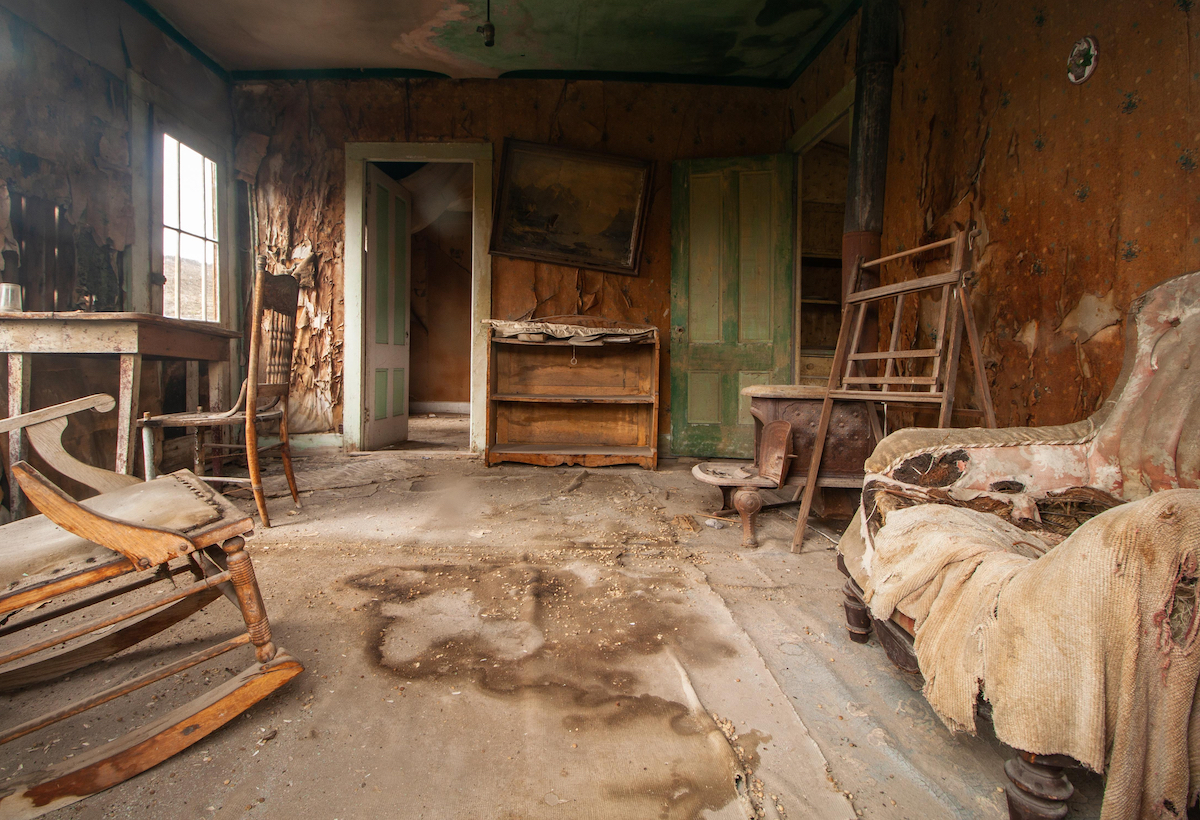 The abandoned interior of a building in the Bodie ghost town.

Bodie’s glory days as a prosperous boomtown didn’t last long. In the early 1880s, just two decades after the town had sprung up, people began leaving Bodie in search of riches elsewhere. As the town’s gold supplies continued to dry up over the following decades, more and more residents left.

In 1913, the Standard Company, which had once been Bodie’s most prosperous mining organisation, ceased its operations in the town. Though some determined residents and prospectors fought for the town, it was entirely abandoned by the 1940s. 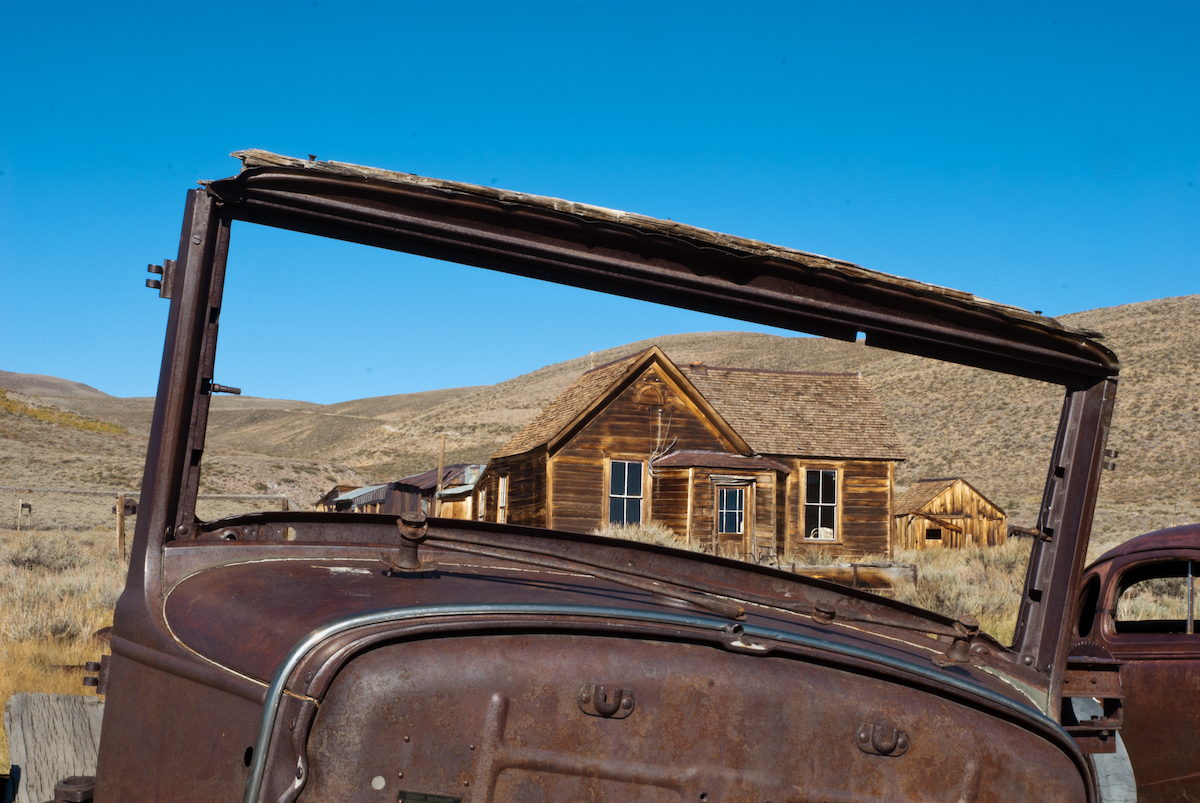 When the residents of Bodie left, many of them just took what they could carry, abandoning their belongings and even entire homes. In 1962, Bodie was crowned a State Historic Park. Granted “arrested decay” status, it is now preserved by California State Parks in near enough the state its residents left it in. The town is open to visitors and boasts around 100 surviving structures. 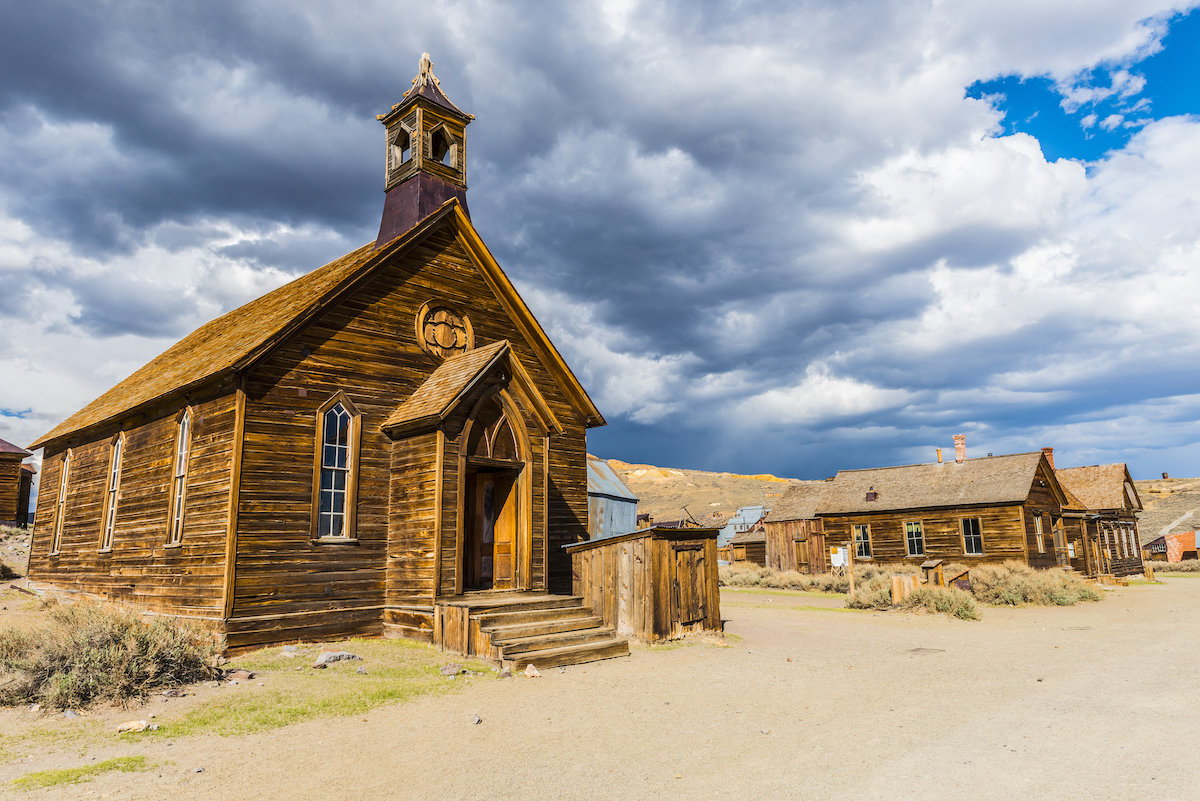 One of two churches that served the once-prosperous boomtown of Bodie, California.

This church was erected in 1882 and was used regularly by the townsfolk of Bodie up until 1932, when it hosted its last service. 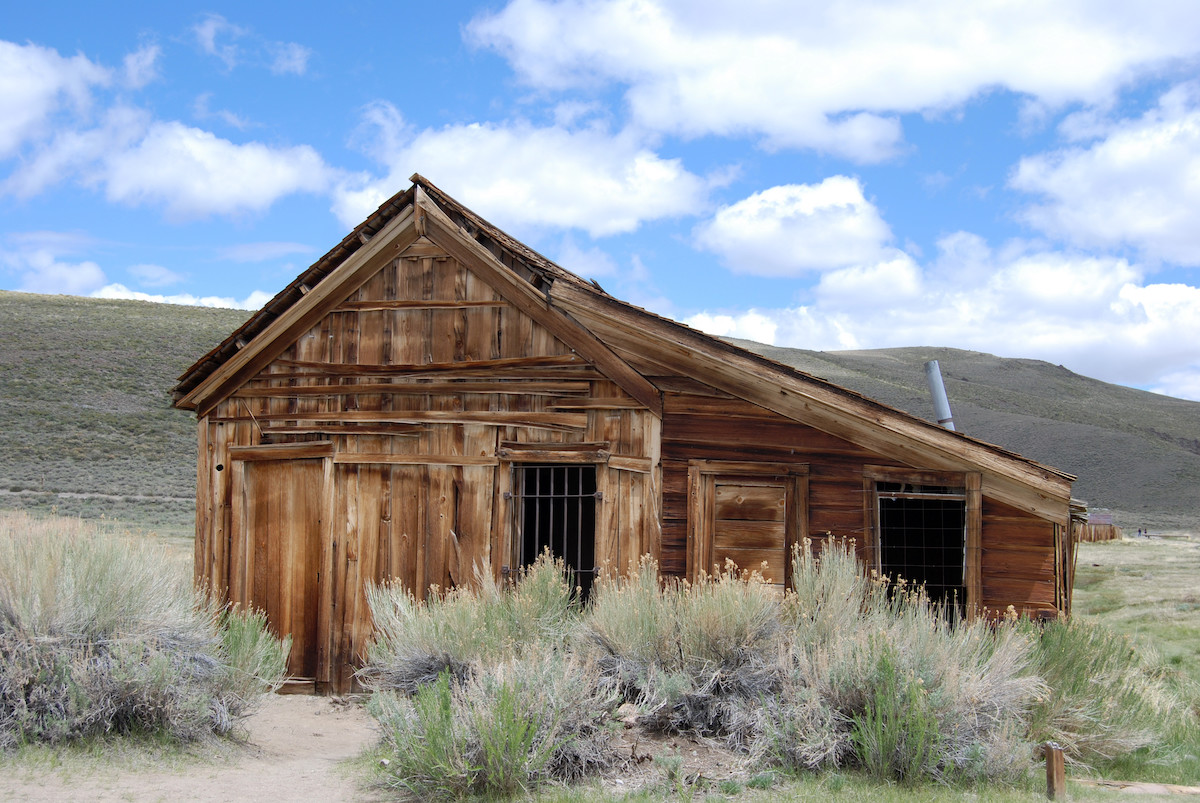 The former jailhouse of Bodie, California.

In 1877, the people of Bodie constructed this jail in the town to ensure that local sheriffs had a place to house suspected criminals. The small jail was used regularly, and it’s reported that it even saw a successful escape attempt. When the famed actor John Wayne paid a visit to Bodie, he visited Bodie Jail. 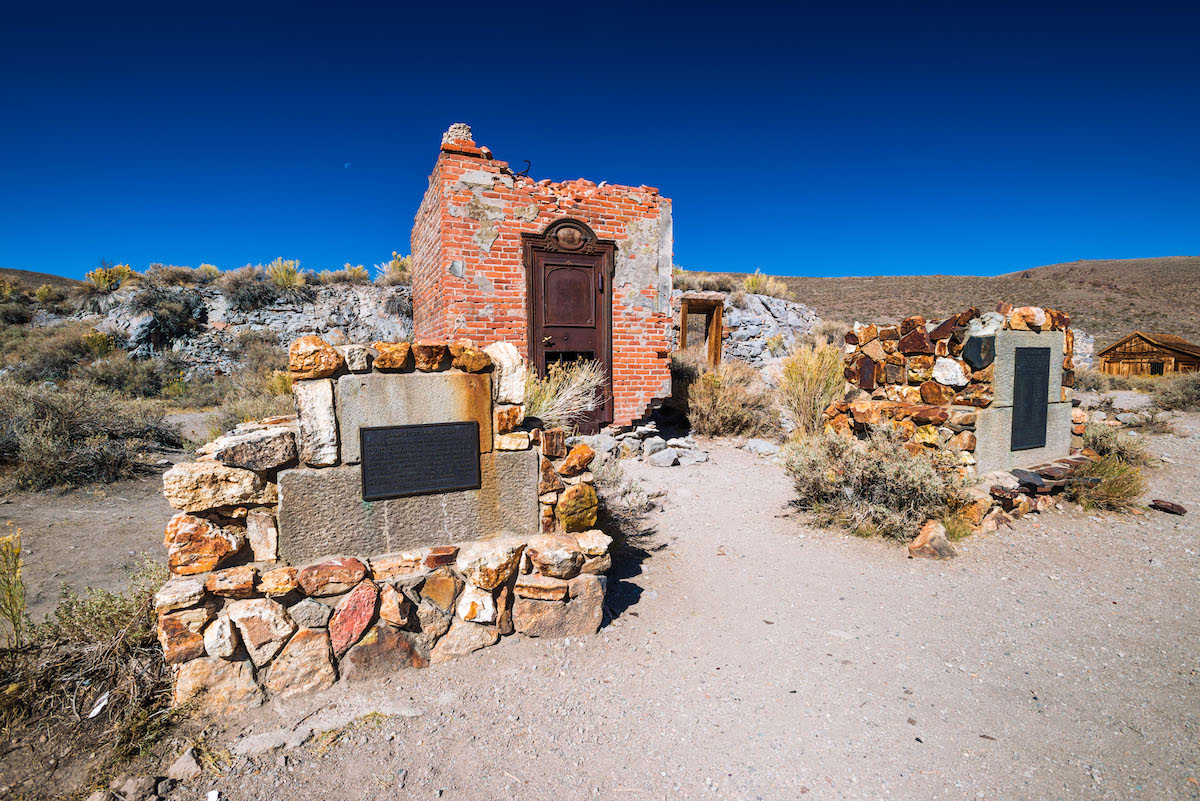 This bank served the town of Bodie from the late 19th century, even surviving a devastating fire in the town in 1892. However, in 1932, another fire hit the settlement, damaging the roof of the bank and causing extensive damage. 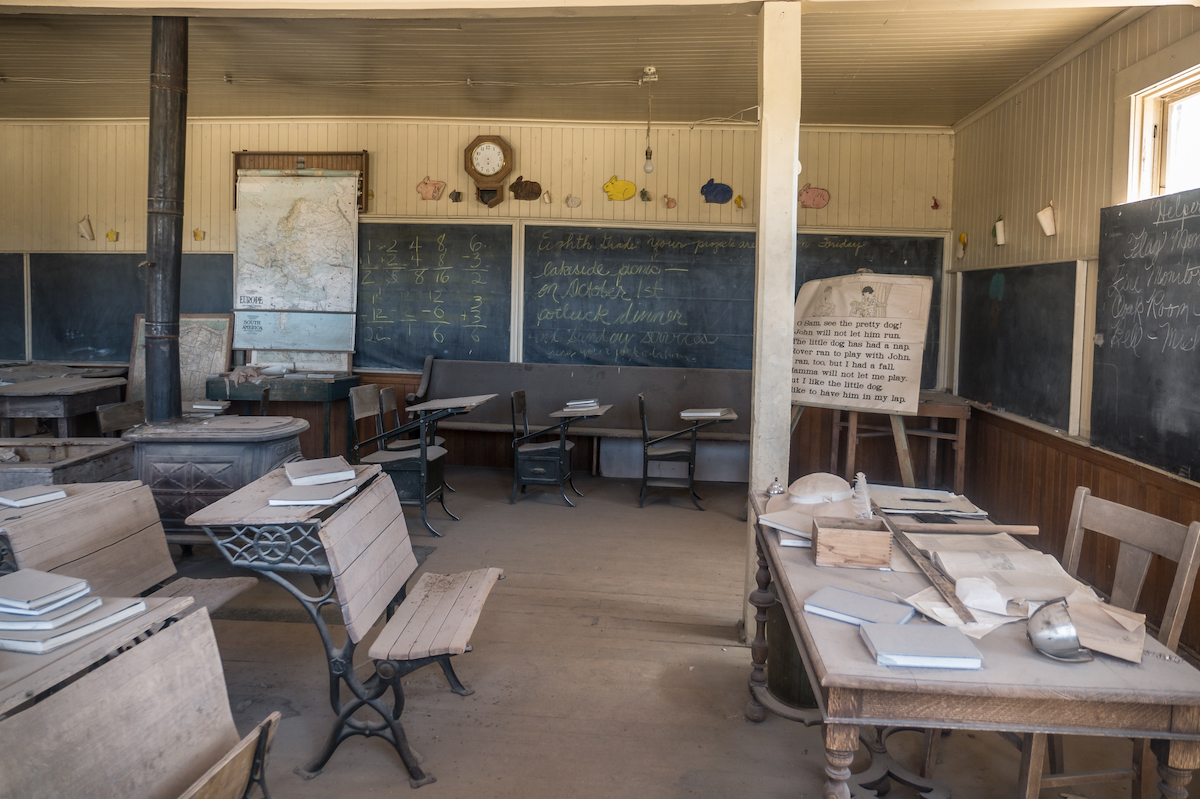 The interior of the old schoolhouse at Bodie State Park. Thousands of artefacts were left there when the town was abandoned.

This structure was first used as a lodge in the 1870s, but was later converted into a school. Inside, the old schoolhouse is eerily well preserved, with desks still standing, toys lying around and shelves full of books. The rear of the school is now used as makeshift archive and contains several hundred artefacts recovered from the structure. 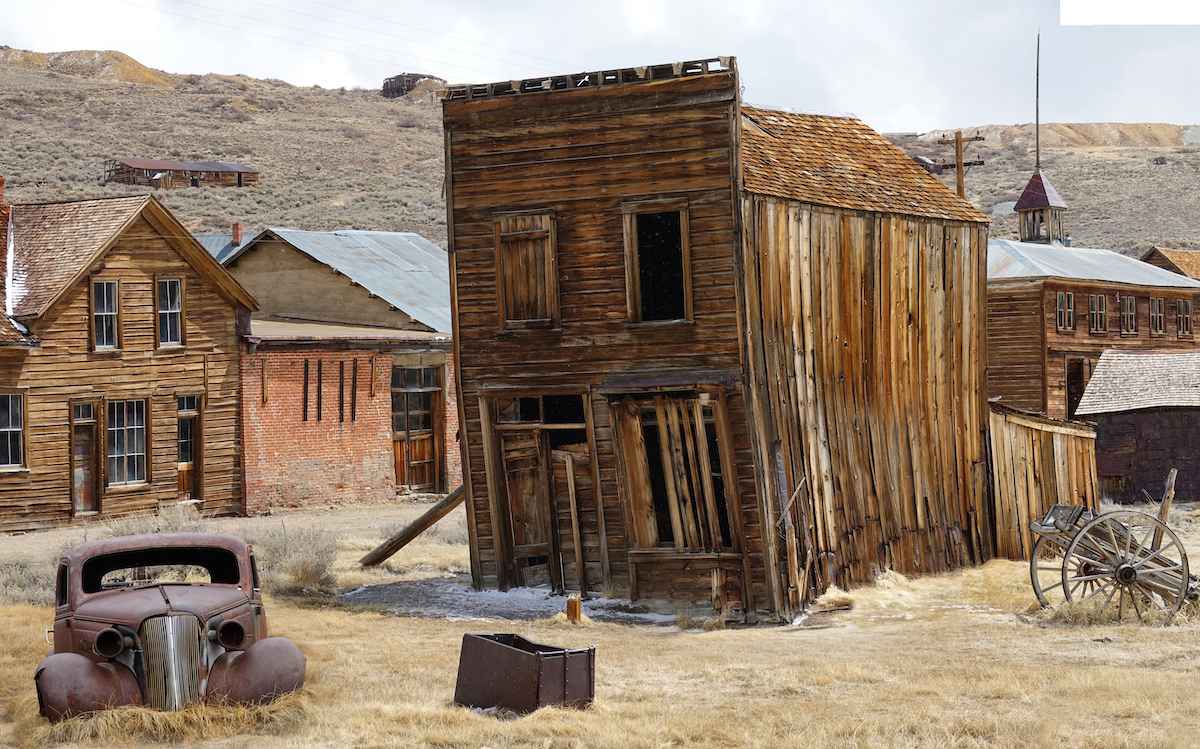 This leaning structure, known as the Swayzey Hotel, served many uses during Bodie’s short life as a boomtown. As well as being an inn, the building was used as a casino and a clothing store. It’s now one of the most popular buildings in Bodie, which is open to visitors for a small fee.