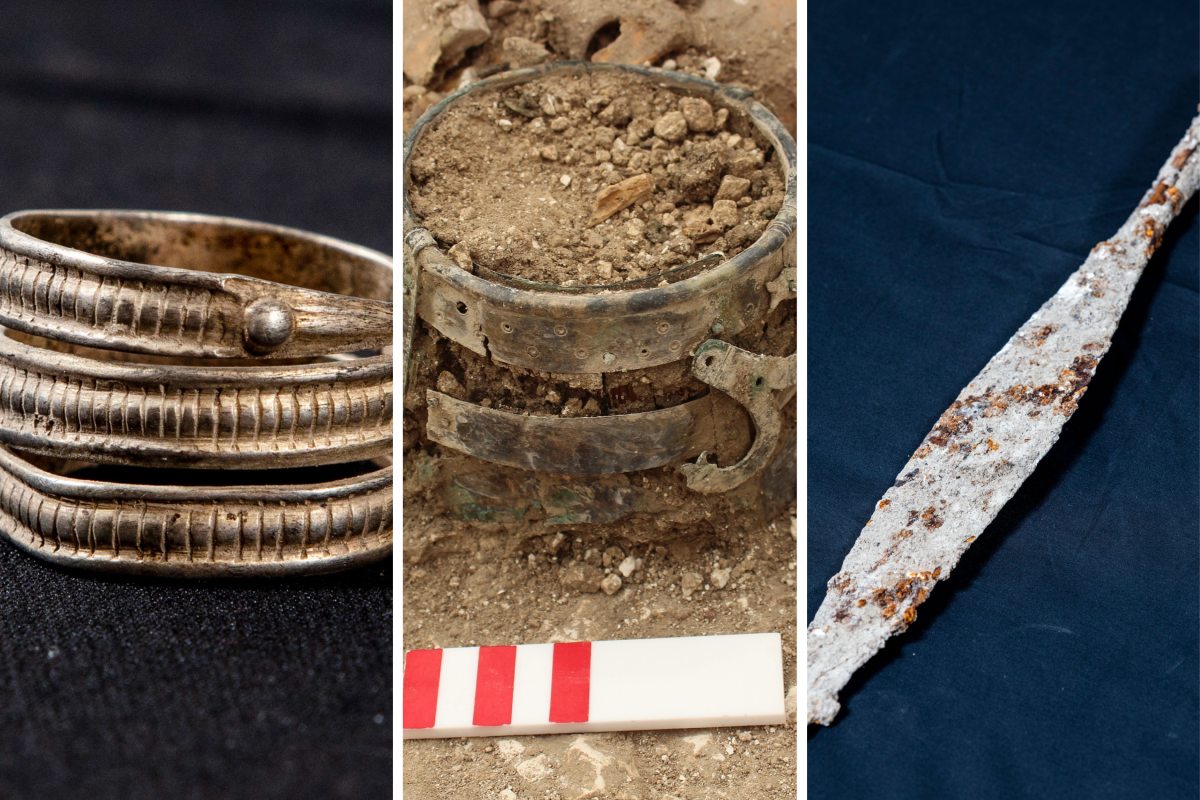 In 2021, archaeological excavations on the route of the HS2 rail network in England uncovered 141 burials rich in grave goods, including spears, swords and jewellery. The stunning discovery of early medieval burials at Wendover, Buckinghamshire shed light on the post-Roman period in Britain, and how ancient Britons lived and died.

Here are 10 remarkable photos of the excavations and of artefacts uncovered during the dig. 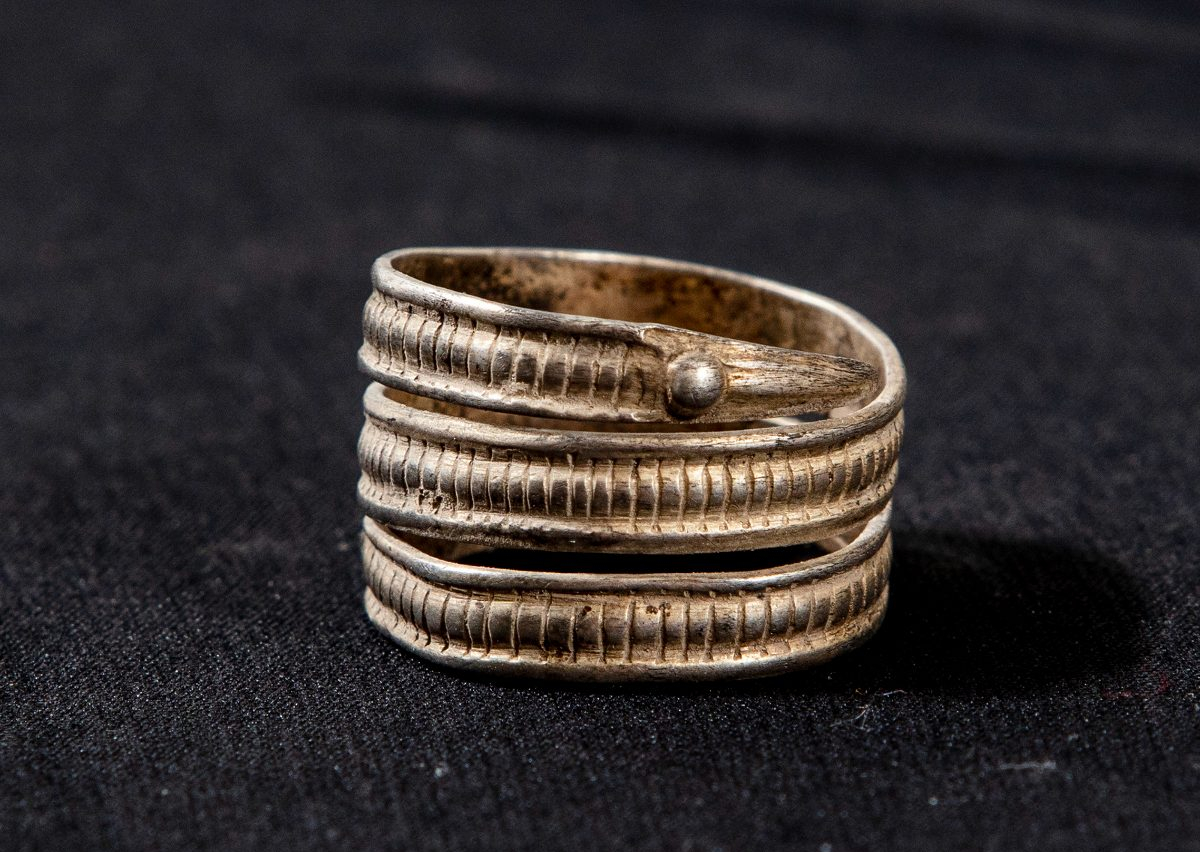 A silver “zoomorphic” ring discovered in an Anglo Saxon burial in Wendover.

This silver ring of uncertain origin was discovered at the archaeological site at Wendover. The excavation has the potential to significantly improve historical and archaeological understandings of early medieval Britain.

The discoveries may help to illuminate the transformations of post-Roman Britain, explanations of which conventionally take for granted the influence of migration from north-west Europe, as opposed to late Romano-British communities evolving in a post-imperial context. 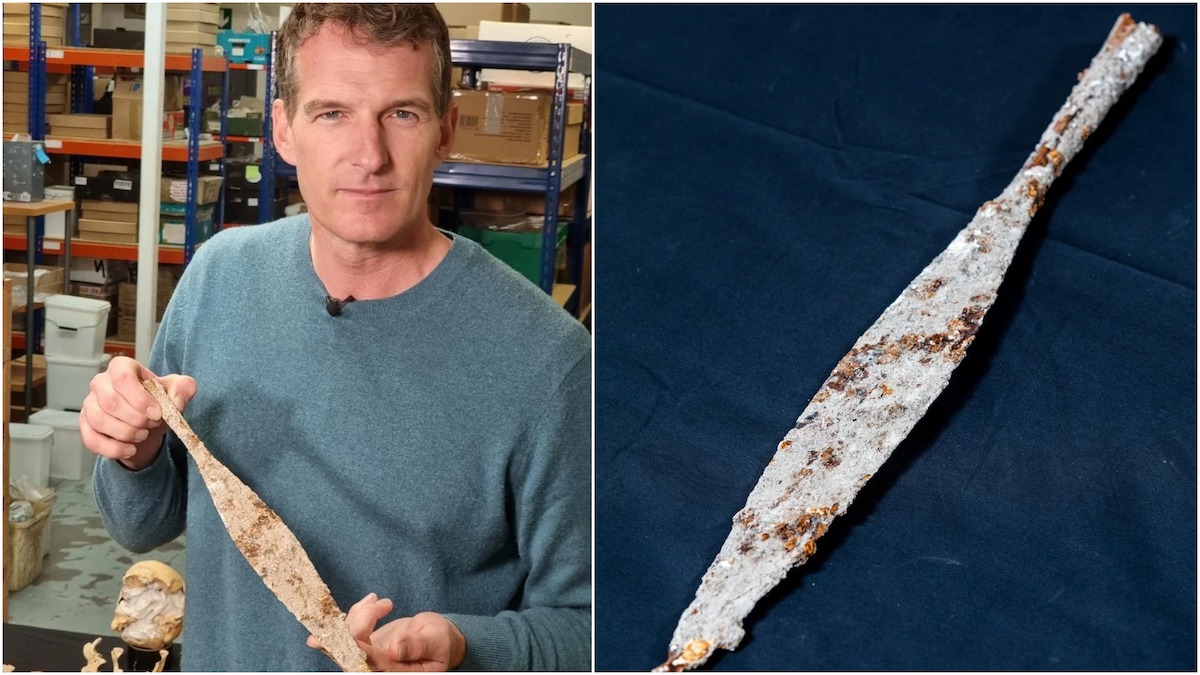 15 spearheads were discovered during the HS2 excavations in Wendover. Other weapons were uncovered in the excavation, including a large iron sword.

3. Male skeleton with an iron spear point embedded in the spine 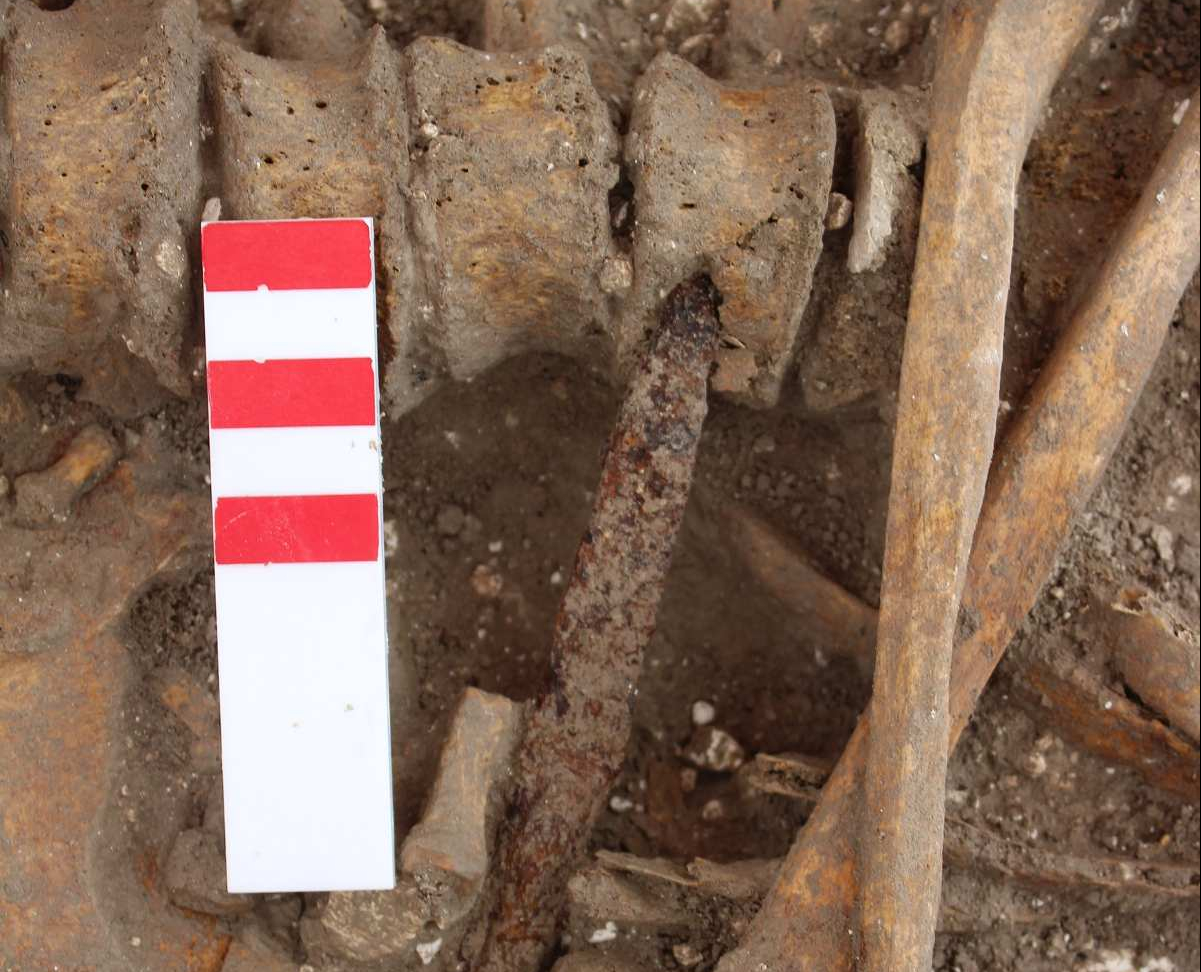 A possible male skeleton, aged 17-24, found with a iron spear point imbedded into the thoracic vertebra, excavated during HS2 archaeological work in Wendover.

A possible male skeleton, aged between 17 and 24, was found with a sharp iron object embedded in its spine. The probable spear point was sunken within the thoracic vertebra and seems to have been driven from the front of the body. 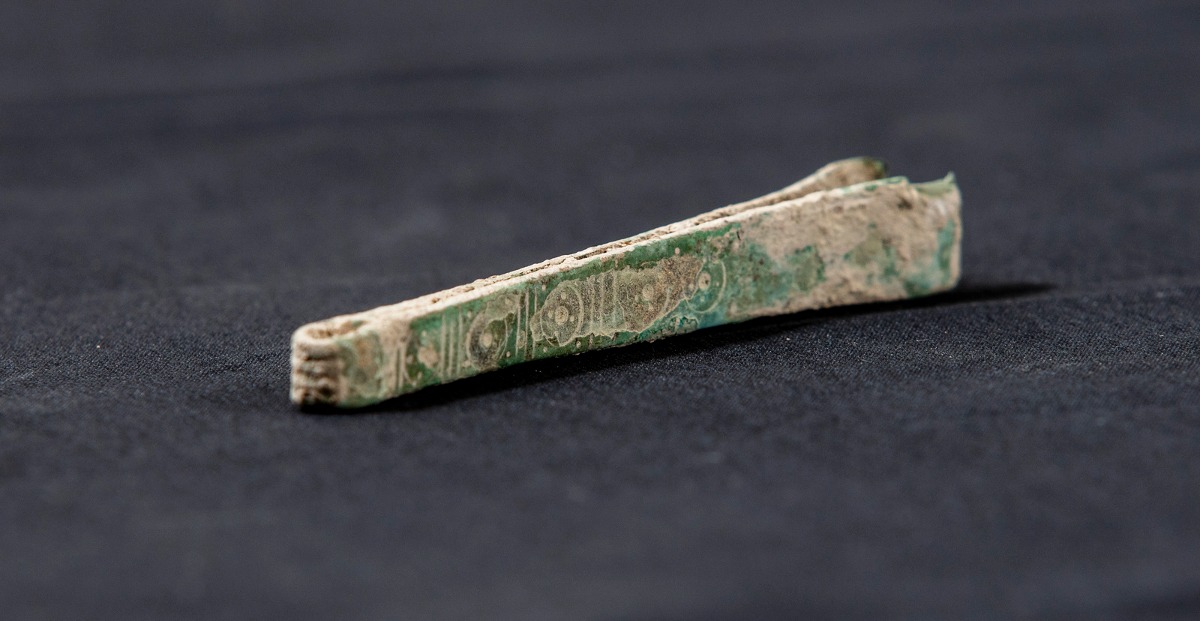 A set of 5th or 6th century decorated copper alloy tweezers uncovered in a HS2 excavation in Wendover.

Among the items discovered were a pair of 5th or 6th-century decorated copper alloy tweezers. They join combs, toothpicks and a toiletry set with an ear wax cleaning spoon among the grooming items deposited at the burial site. A cosmetic tube that may have contained ancient eyeliner was also discovered. 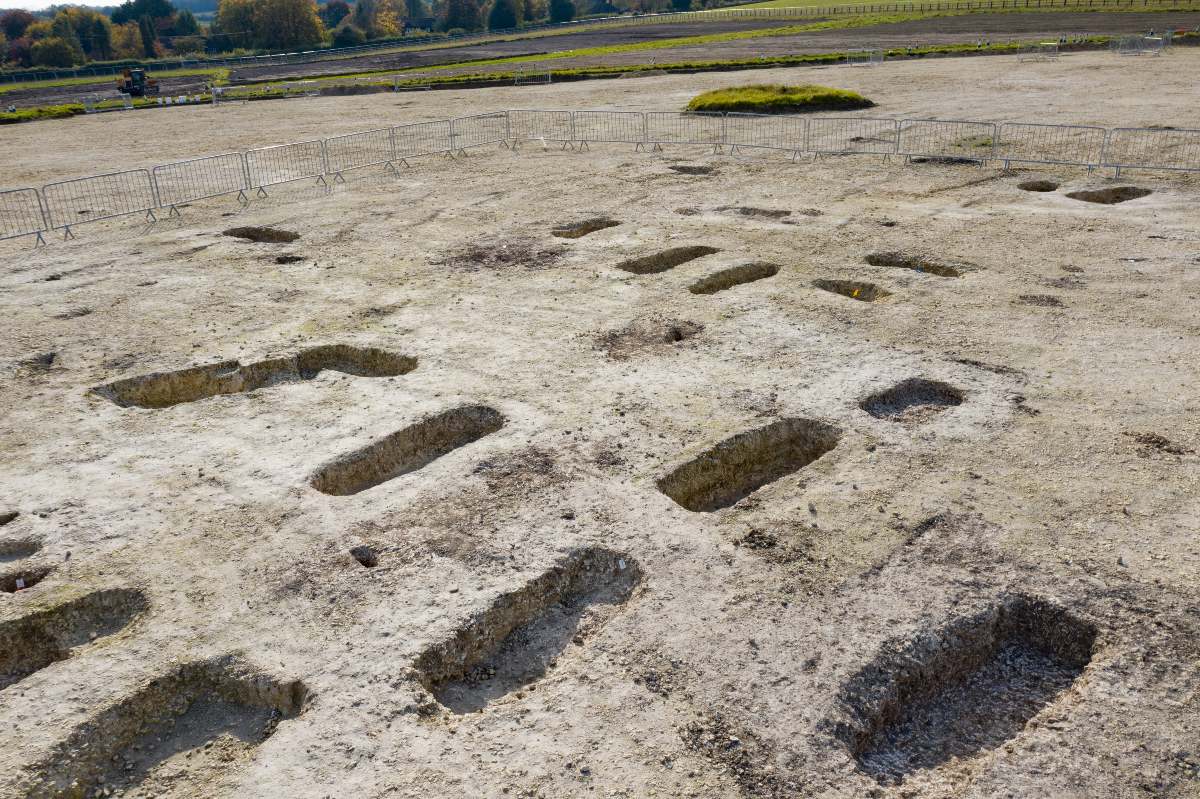 Site of the HS2 excavation of an Anglo Saxon burial ground in Wendover where 141 burials were uncovered.

The site was excavated in 2021 by around 30 field archaeologists. 138 graves were discovered, with 141 inhumation burials and 5 cremation burials. 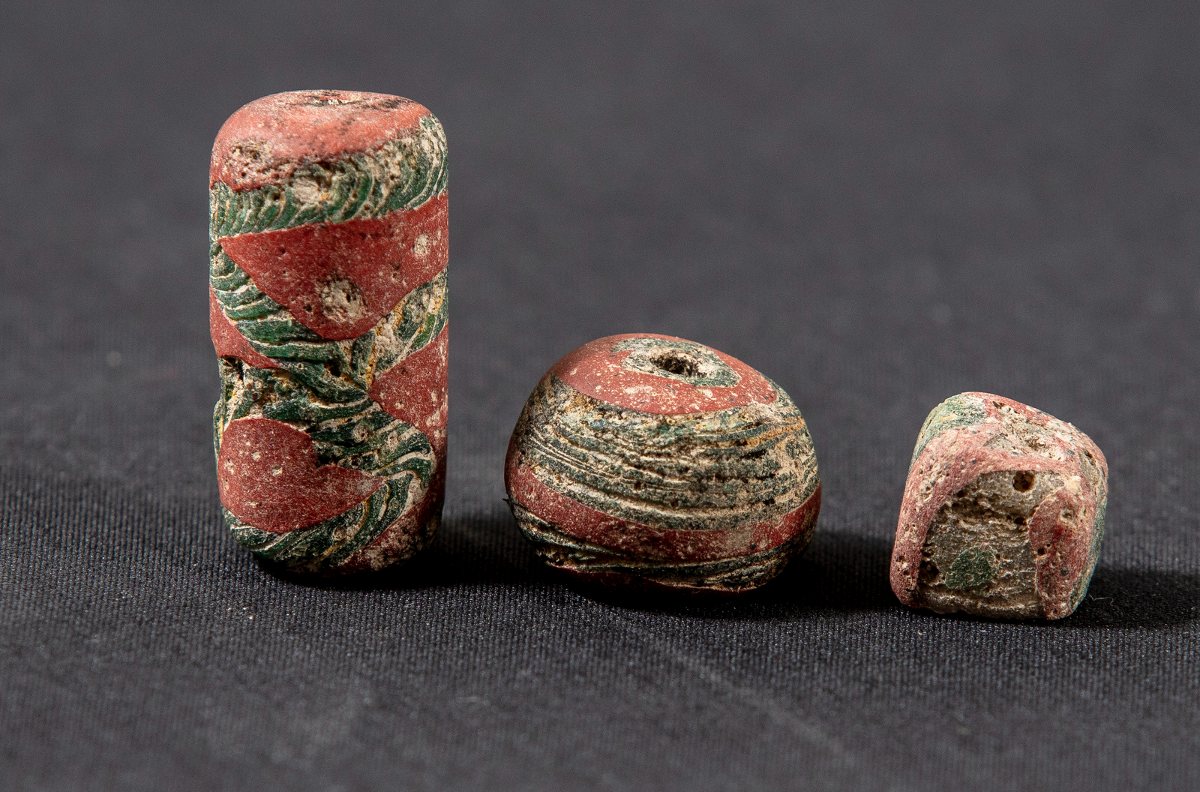 Decorated glass beads uncovered in an Anglo Saxon burial during HS2 archaeological excavations in Wendover. Over 2000 beads were uncovered in the excavation.

7. A ceramic bead, made from reused Roman pottery 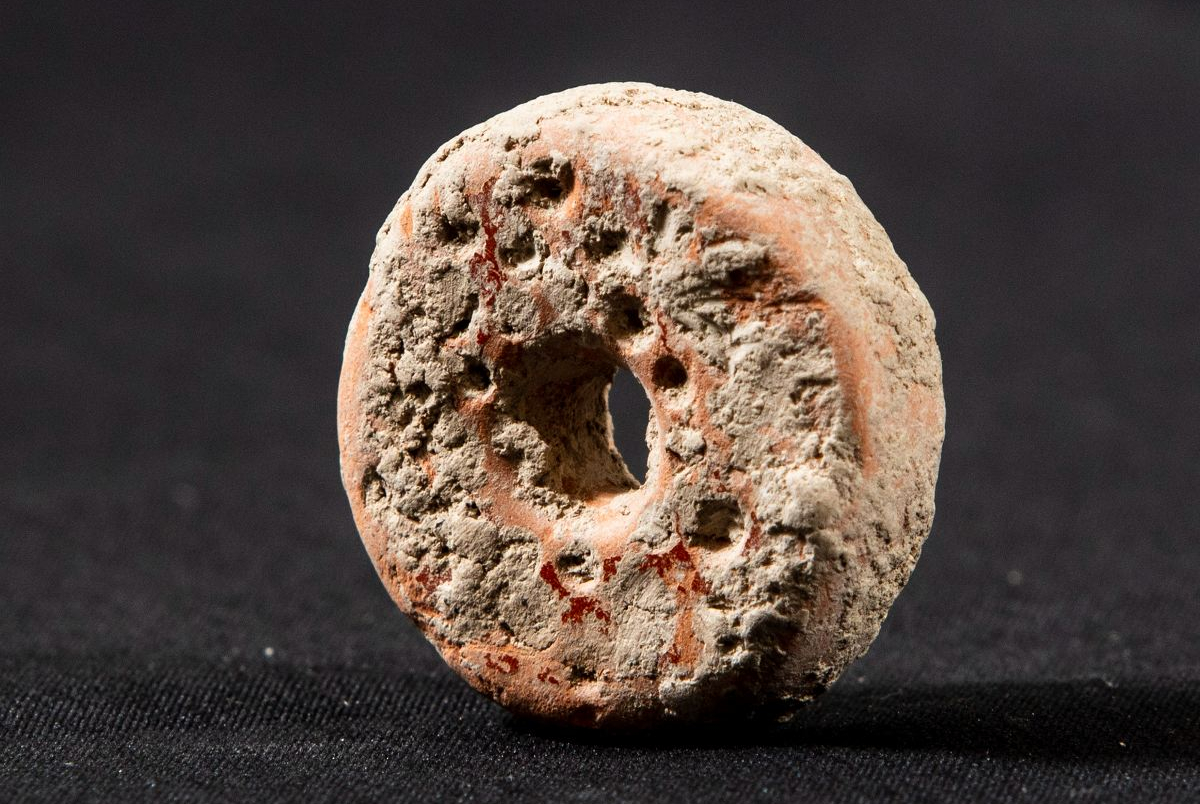 A ceramic bead, made from Roman pottery, uncovered during HS2 archaeological excavations of Anglo Saxon burials in Wendover.

This ceramic bead is made from repurposed Roman pottery. The extent of continuity between the Roman and post-Roman periods in Britain is a point of contention among archaeologists. 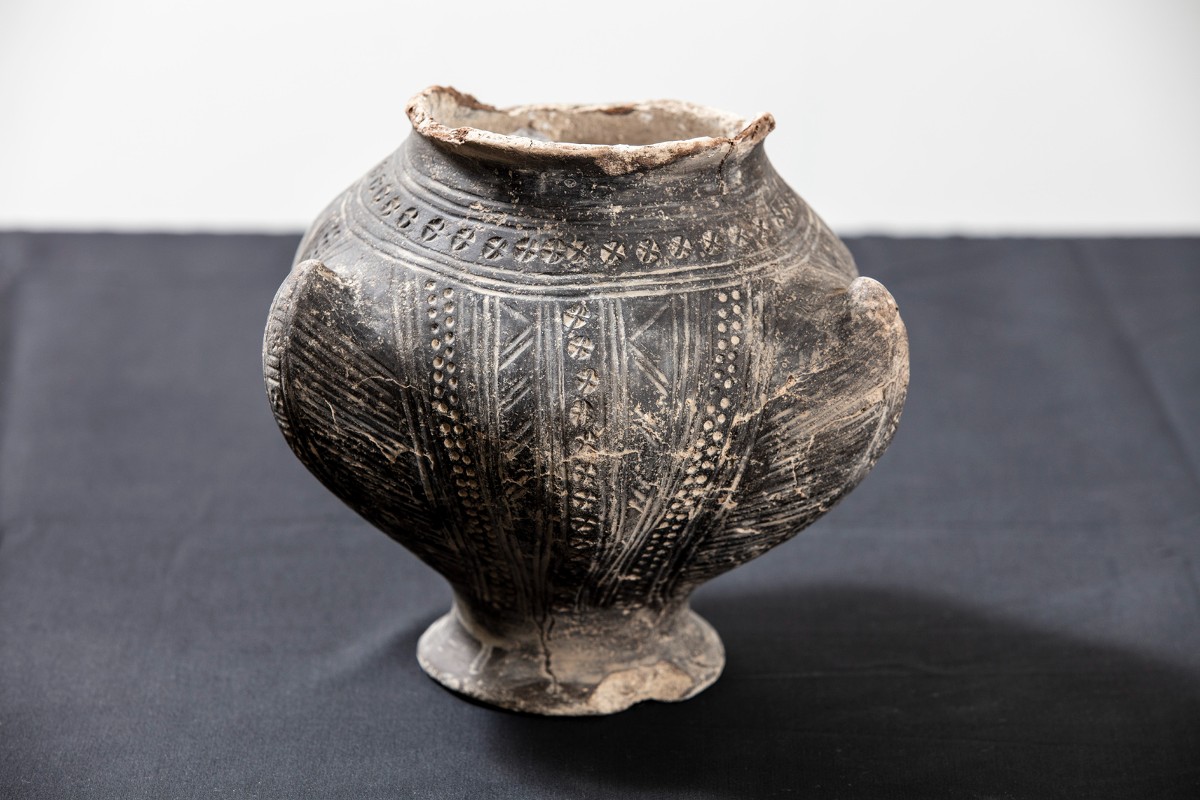 A 6th-century decorative footed pedestal bückelurn with three horns, decorated with cross stamps, found in a grave in Buckinghamshire. There is a twin item that is currently on display in Salisbury Museum that is so similar, experts believe that they may be made by the same potter.

Many burials were accompanied with vessels similar in style to cremation urns, but placed as accessories. The protruding horns on this vessel are unique, while the “hot cross bun” stamps are a common motif. 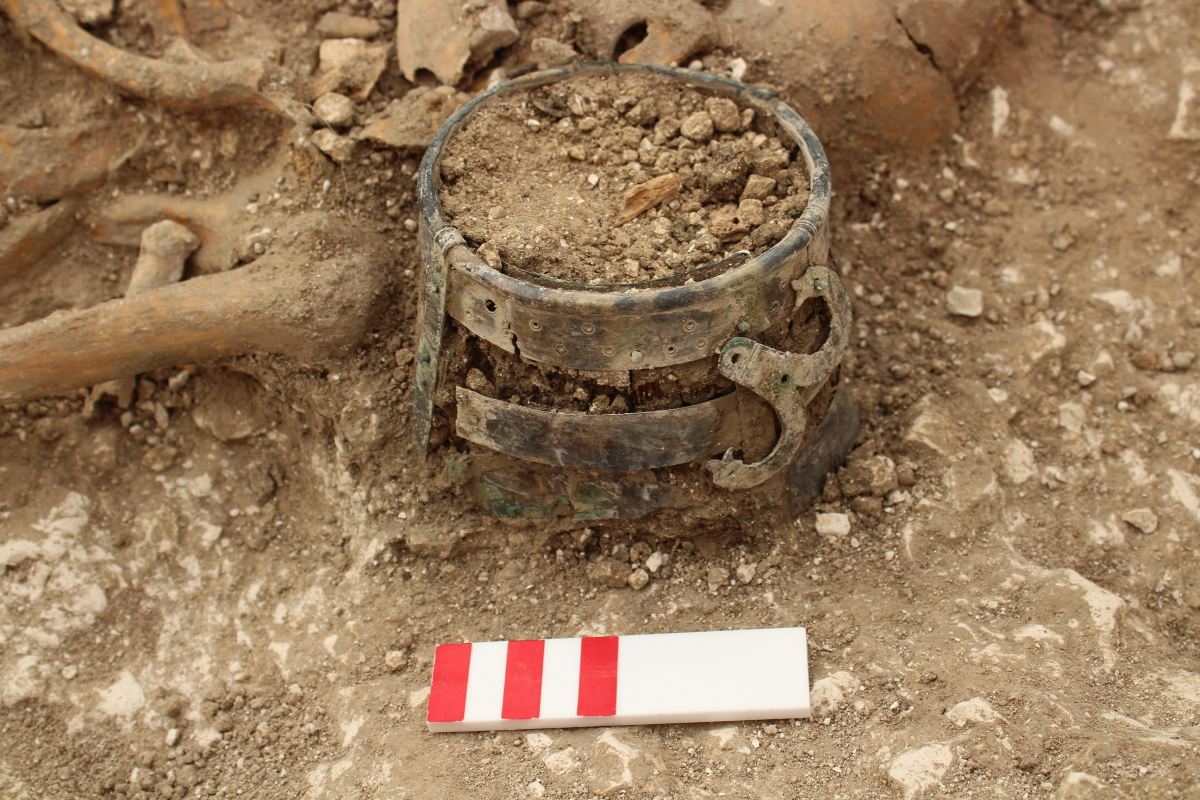 A bucket recovered at the HS2 excavation at Wendover.

What may appear to be an unremarkable object of daily use has the potential of having a more important meaning. This wood and iron bucket was recovered at Wendover, and survives with wood pieces fused to the metalwork.

10. A tubular rimmed glass bowl that may be a Roman heirloom 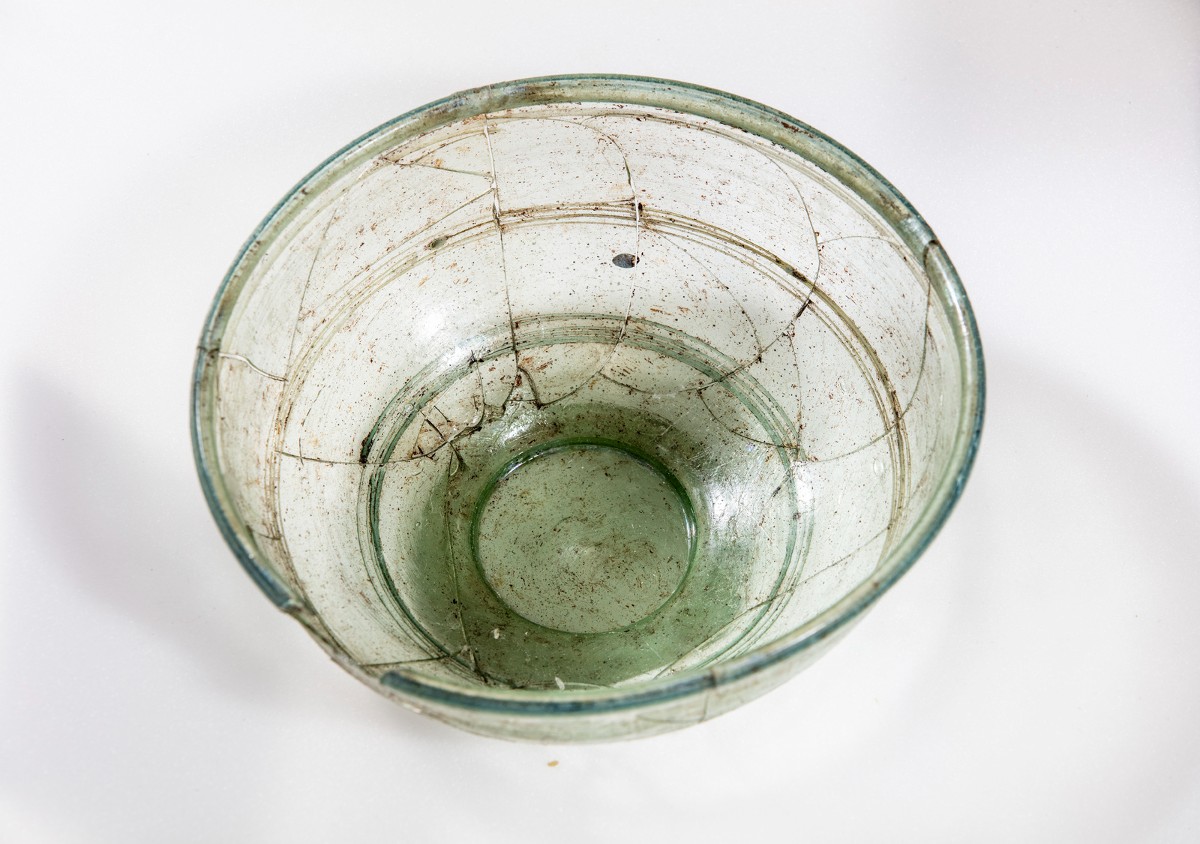 A tubular rimmed glass bowl found in a burial thought to be made around the turn of the 5th century and could have been an heirloom from the Roman era.

A glass bowl which may be a Roman heirloom was found in one of the burials at Wendover. The ornate bowl was made of pale green glass, and may have been made around the turn of the 5th century. It is one of the remarkable finds preserved beneath the soil, now subject to assessment and analysis to reveal more insight into the lives of late antique and early medieval Britain.