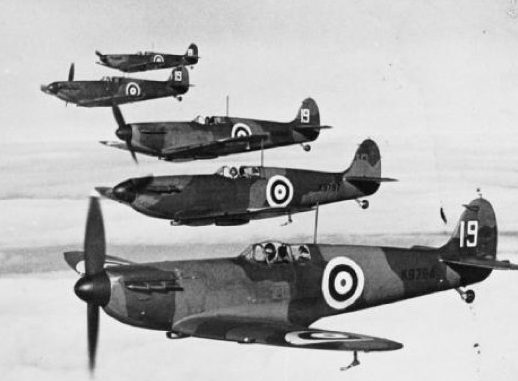 From the outset of World War Two fighter and bomber aircraft were clearly differentiated, with the former often used to protect the latter.

The German Messerschmitt Bf 109 was perhaps the finest fighter of its day, even if less heavily armed than the Spitfire, and set the benchmark for German fighters throughout the war.

The defence of the British Isles in the early part of the war was of paramount importance and depended heavily upon domination in the skies. Britain’s iconic Supermarine Spitfires were ably assisted by Hawker Hurricanes.

This duo prevailed in the Battle of Britain, shooting down German aircraft in great numbers before they could cause damage to the mainland.

The Bristol Beaufighter was the first dedicated night-fighter of the war.

Having already recognised the role that bombing was to play in future war, the British were able to deploy this radar-navigated aircraft with increasing success in the latter stages of the Battle of Britain.

The Beaufighter was ultimately replaced by the de Havilland Mosquito, which offered bomber support over Europe as well as defence for the British Isles.

The Bf 190 was joined from 1941 by the Focke-Wulf Fw 190, which provided the Germans with a second world-class fighter.

These aircraft were continually re-equipped as the war progressed and provided the option of conducting swift ground attacks.

In response to their need for a single-engine fighter with a greater offensive threat, the RAF developed the Hawker Hurricane Mk II. This was produced in great quantities and proved highly reliable.

It was later fitted with 40 mm canons as well as rockets, making it an effective tank-buster, and was central to victory in North Africa.

The Americans developed the greatest array of fighter bombers, with its classic Lockheed P-38 fighter being modified throughout the war.

The Curtis P-40 Warhawk, known to the RAF as the Kittyhawk, carried six machine guns and seven bombs and helped to secure Allied victory in North Africa.

In the second part of the war, the Republic P47 Thunderbolt was re-designed and became a fighter bomber rather than just an escort to the larger aircraft.

This proved a key to fulfilling more offensive tactics as the Germans were pushed back. The P47 was bolstered with a much larger engine and eight machine guns rather than the original two.

It could carry three bombs or ten rockets and was able to take severe punishment thanks to its heavyweight armour.

From autumn 1942 the American P47 was accompanied in the sky by the British Hawker Typhoon, which was powered by a new engine and offered exceptional performance in low level ground attacks.

Carrying two bombs or eight armour-piercing rockets, the Typhoons made light work of German tanks alongside the American Thunderbolts and were vital to helping the Allies break out of France following D-day.

The P51-D Mustang provided perhaps the most important contribution to the American air threat and is commonly regarded as the finest fighter of the war.

Powered by the Rolls-Royce Merlin engine, it offered B-51 bombers the protection they needed to take out German targets on long-range missions from Britain to Berlin and back.

The squeeze on Germany from the east was also heavily reliant on fighters and fighter bombers.

The Yakolev Yak series of fighters proved to be the USSR’s most versatile and some 37,000 were produced over the course of the war, being used in multifarious roles.

The Soviet Ilyushin Il-2 single-seat fighter bomber was covered in thick armour and capable of carrying an array of weapons, including two canons, two machine guns and four rocket powered bombs on each wing.

Two further tank busting canons could be added for low level raids. Their pilots confidently referred to the Ilyushin Il-2 as a ‘flying tank’.

The A6M is seen by many as the symbol of Japanese air power during World War Two. With a maximum speed of 331 mph and the ability to climb to 6,000 metres in 7 minutes and 27 seconds, it possessed an ascendancy over any other fighter type in the Pacific.

It was usually referred to by its pilots as the “Reisen” (zero fighter), “0” being the last digit of the Imperial year 2600, or 1940, the year it entered service.

It was the most produced Japanese aircraft during the war and was one of the key planes to attack Pearl Harbour on 7 December 1941.