The Flavian Amphitheatre (Amphitheatre Flavium) in Pozzuoli was constructed during the reign of the Emperor Vespasian, probably in around 70AD.

Vespasian, who was the first Flavian dynasty emperor, built this vast amphitheatre – the third largest in Ancient Rome after those of Rome and Capua – in Pozzuoli as it was at an important crossroad.

Later damaged by ash and rubble from the eruption of the Solfatara volcano, Pozzuoli’s Flavian Amphitheatre lay abandoned and was used as a quarry for its marble. Nevertheless, when it was excavated in the nineteenth century, archaeologists found the Flavian Amphitheatre in a very good state of preservation, with many of its walls and floors intact.

However, one of the key highlights of a trip to the Flavian Amphitheatre is the fact that you can explore the underbelly of this once-thriving stadium and wander through the rooms and chambers below the arena itself. It is even possible to see the quarters in which the gladiators themselves would have prepared for their contests. This amazing set of underground corridors and passageways remains in an excellent state of preservation and gives a genuine glimpse into the amphitheatre’s past .

Today, the Flavian Amphitheatre operates as a popular destination for those who visit the (now dormant) Solfatara volcano and the local area. 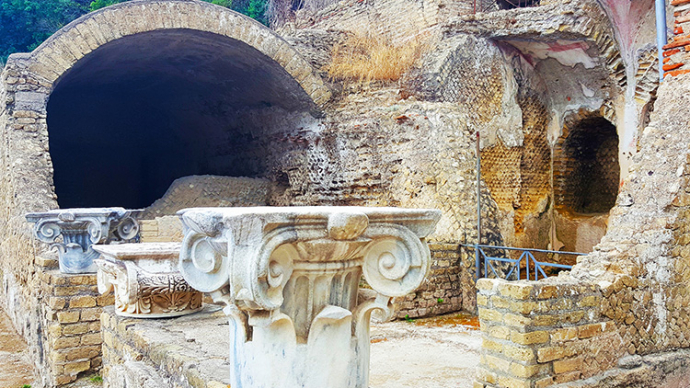 Baia was once the summer retreat of Ancient Rome’s elite and is now an archaeological park outside Naples.

The Roman Theatre of Benevento is a well-preserved semi-circular Roman theatre that was built under the Emperor Hadrian.

Cumae Archaeological Park in Pozzuoli houses a series of ancient ruins and artefacts and is thought to have been inhabited as far back as the Iron Age.

Just as empires rise and fall so do entry fees and opening hours! While we work as hard as we can to ensure the information provided here about Flavian Amphitheatre is as accurate as possible, the changing nature of certain elements mean we can't absolutely guarantee that these details won't become a thing of the past. If you know of any information on this page that needs updating you can add a comment above or e-mail us.