The Oldest Crowns in the World | History Hit 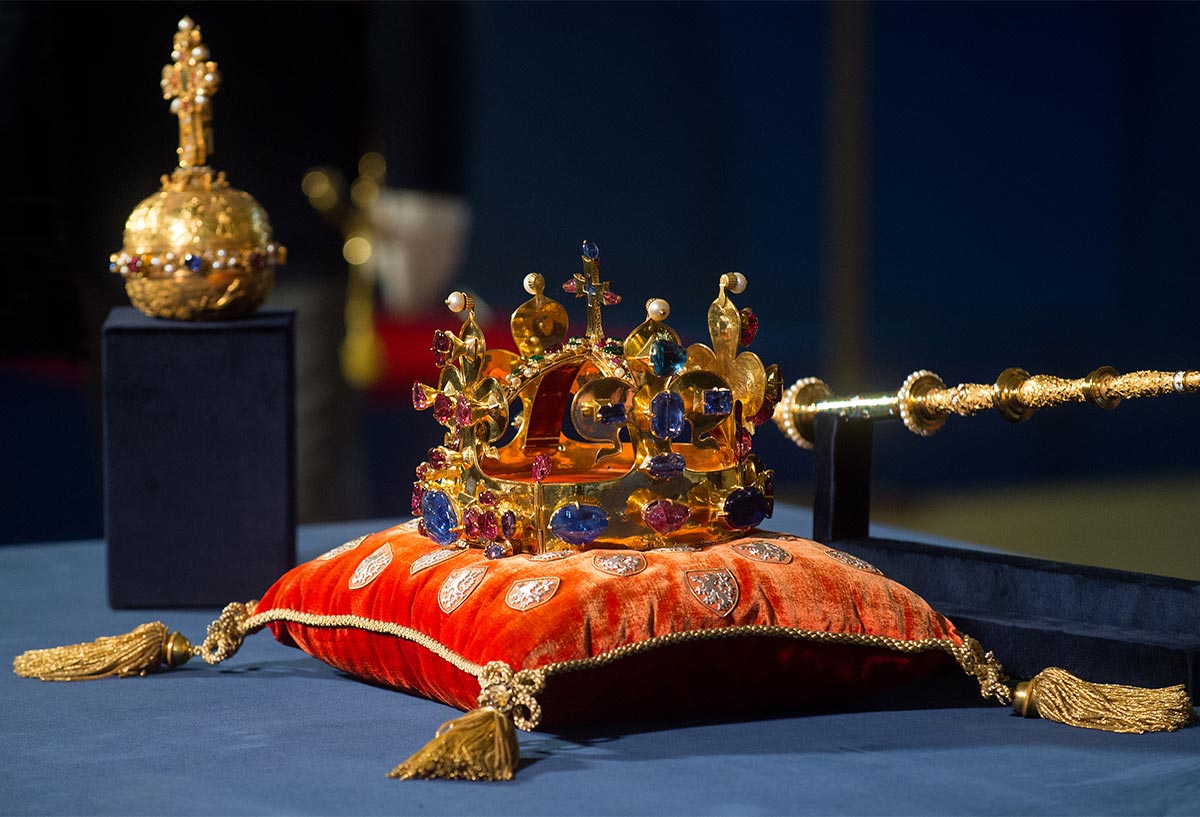 Royal crowns are some of the most recognisable symbols of monarchical power. For thousands of years historical figures of great importance have worn headpieces that emphasise their standing in the hierarchical order of society. In some respects, the bigger the hat the more significant the individual was. To this day they play an important role in crowning ceremonies and as a legacy of a country’s heritage.

Most crowns from the far past are lost to us, with only statues and imprints on coins reminding us how they may have looked like. But there are some that did manage to survive the centuries and sometimes even millennia, to be admired by us in the modern day. Here we explore some of the oldest crowns in the world, ranging from Ancient Egyptian treasure to head adornments worn by Roman emperors.

The Bohemian Crown is famously the oldest surviving royal crown to have been in England, dating back between 1370 to 1380. It most likely belonged to Queen Anne of Bohemia, wife of English king Richard II, before being given to the House of Wittelsbach as part of the dowry of Blanche of England, daughter of King Henry IV. It has been described as ‘one of the finest achievements of the Gothic goldsmith’ and includes diamonds, rubies, emeralds, sapphires, enamel and pearls. 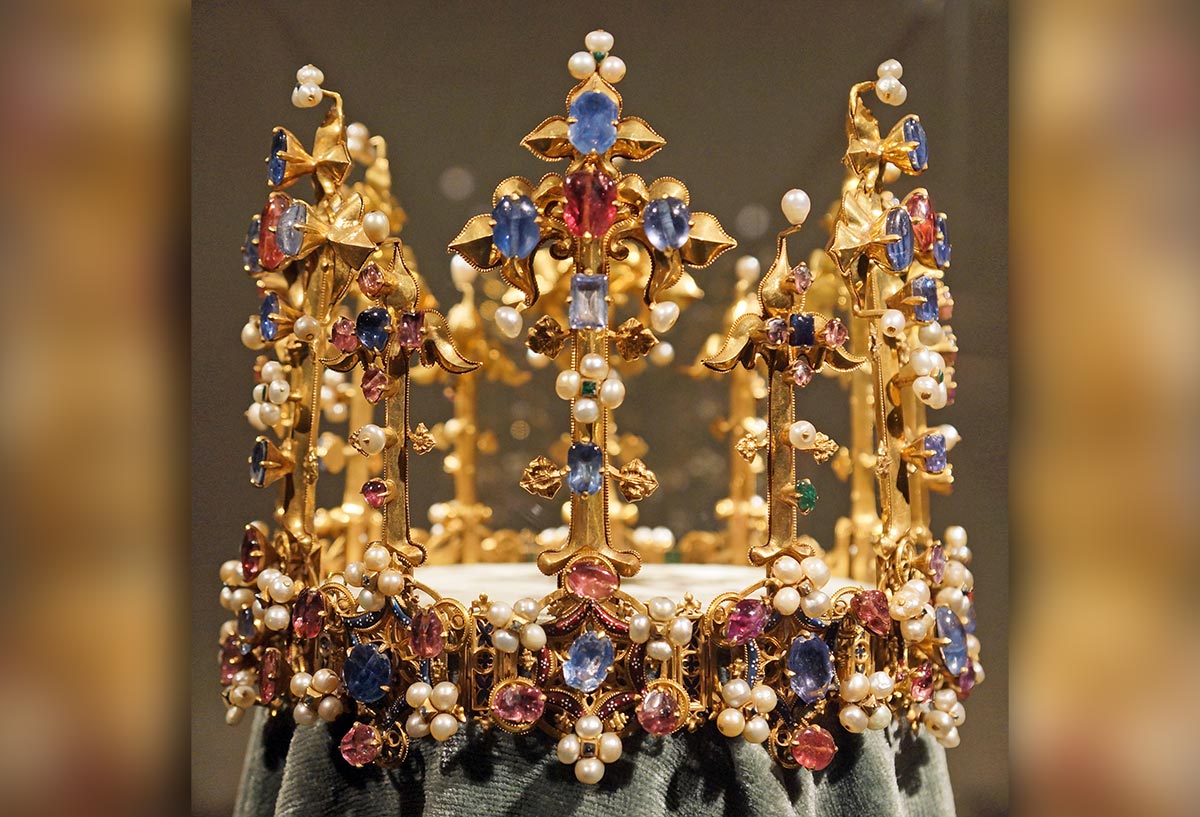 Crown of Princess Blanche at the Munich Residence

Part of the Bohemian crown jewels, the gemstone encrusted head adornment was created in 1346 for Holy Roman Emperor Charles IV. It was made out of 22 carat gold and includes 19 sapphires, 44 spinels, 30 emeralds and 1 red elbaite. A popular legend says that any usurper who places the crown onto their head will be domed to die a violent death the following year. 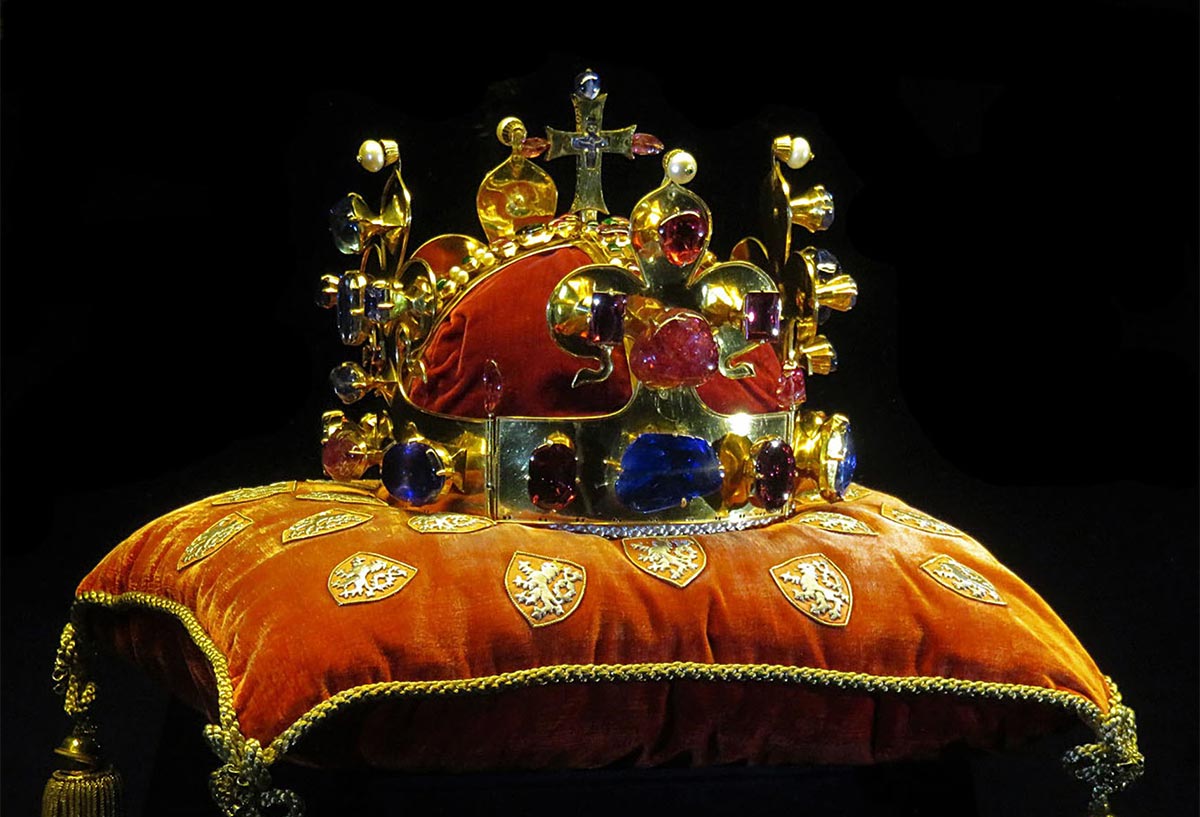 The original Crown of Saint Wenceslas during its exhibition in 2016

The golden skullcap is the oldest crown kept in the Kremlin, originating from the late 13th or early 14th century. The fur trimmings were added later, most probably during the 16th century. Legend says that the medieval crown was given by the Byzantine Emperor Constantine Monomachus to the prince of Kiev, Vladimir Monomakh. Other theories suggest that it was given to Moscow by Uzbeg, Khan of the Golden Horde. The last time the Monomakh’s Cap was used during a coronation ceremony was in 1682, during the dual coronation of Ivan V and Peter the Great. 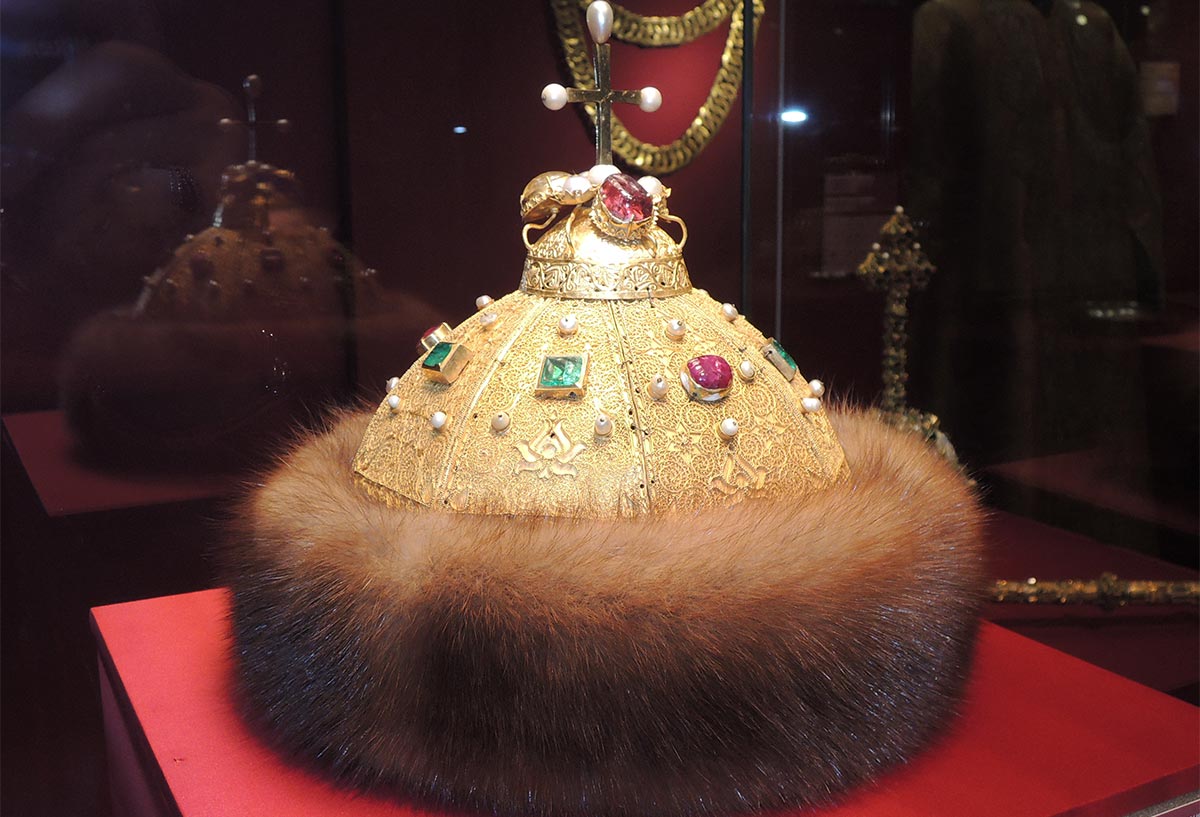 One of two Byzantine crowns that have survived to the present day, the oldest elements of this beautiful head adornment are believed to be from the 11th century. The arches and upper rim composed of alternate pointed and round-topped plaques were added in the following century. The Holy Crown was used in almost all Hungarian coronations, with King Charles IV (Charles I of Austria) being the last one in 1916. 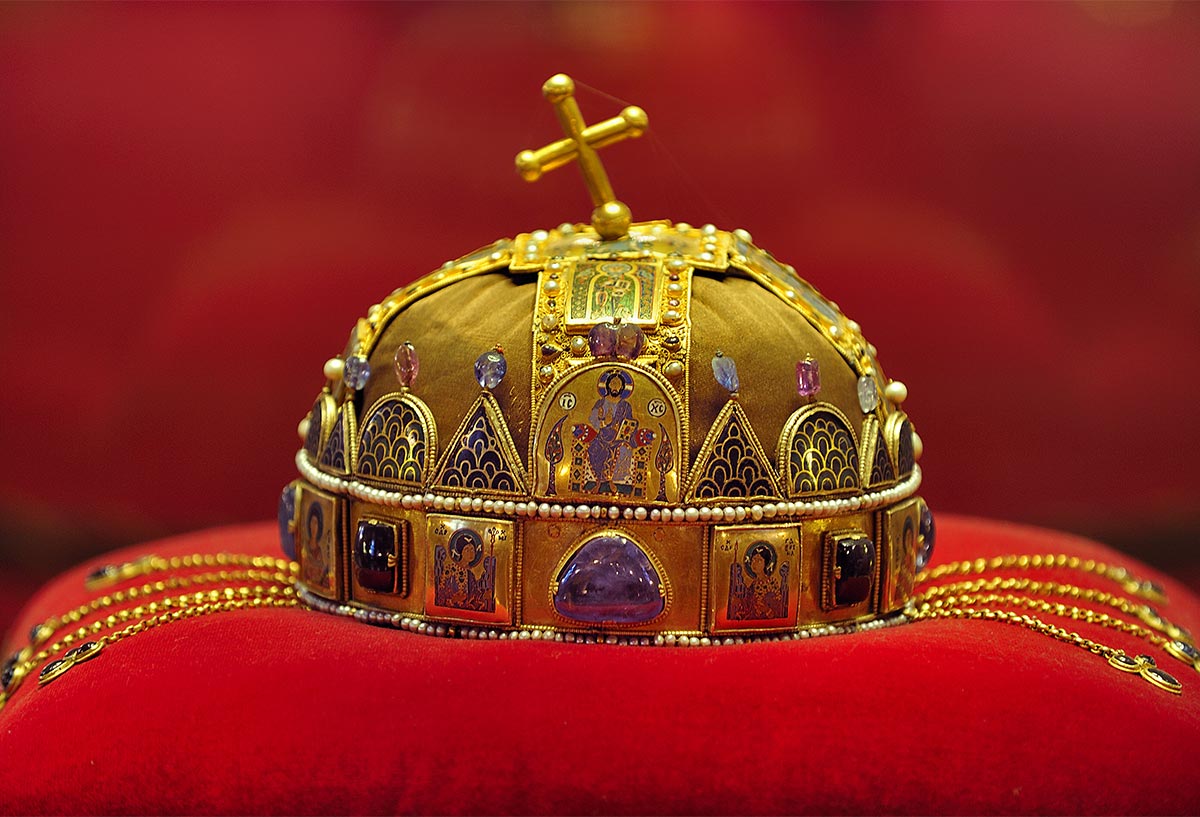 The Holy Crown of Hungary

Confusingly even though the headpiece is known as Charlemagne‘s Crown, it was made for Otto the Great in the 10th century. Created in the Byzantine style for the Holy Roman Emperor, it showcased a great deal of splendour and magnificence. The Imperial Crown was used in official coronations until the dissolution of the Empire in 1806. 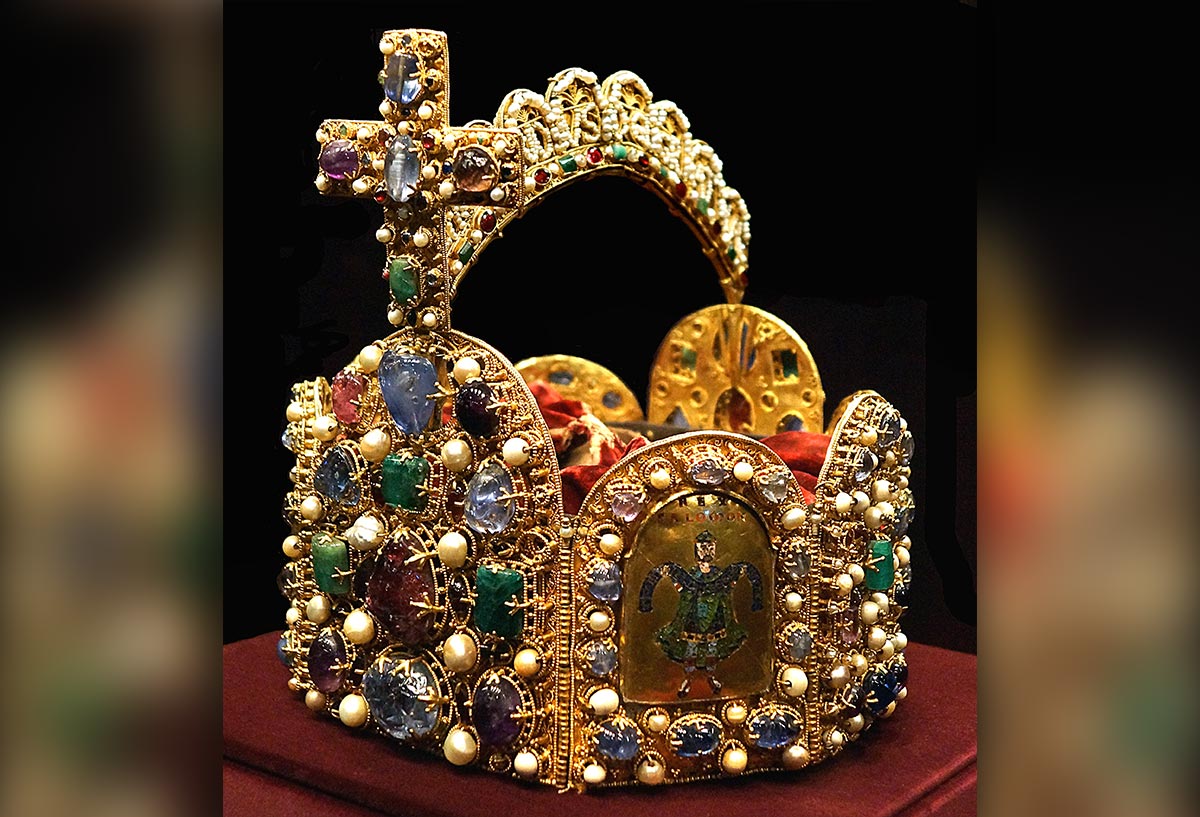 Blacked out and cropped version of The imperial crown of the Holy Roman Empire, displayed in the Imperial Treasury at the Hofburg, Vienna, Austria

During the early Middle Ages, parts of the Korean peninsula was ruled by the Silla Kingdom. One of the most striking survivors from the long-gone state are a collection of golden and bronze crowns created between the 5th to the 7th century. They were hidden from the elements for centuries in burial grounds, being discovered only by chance in 1921. The crowns are considered masterpieces and some of the most important items of Korean heritage. 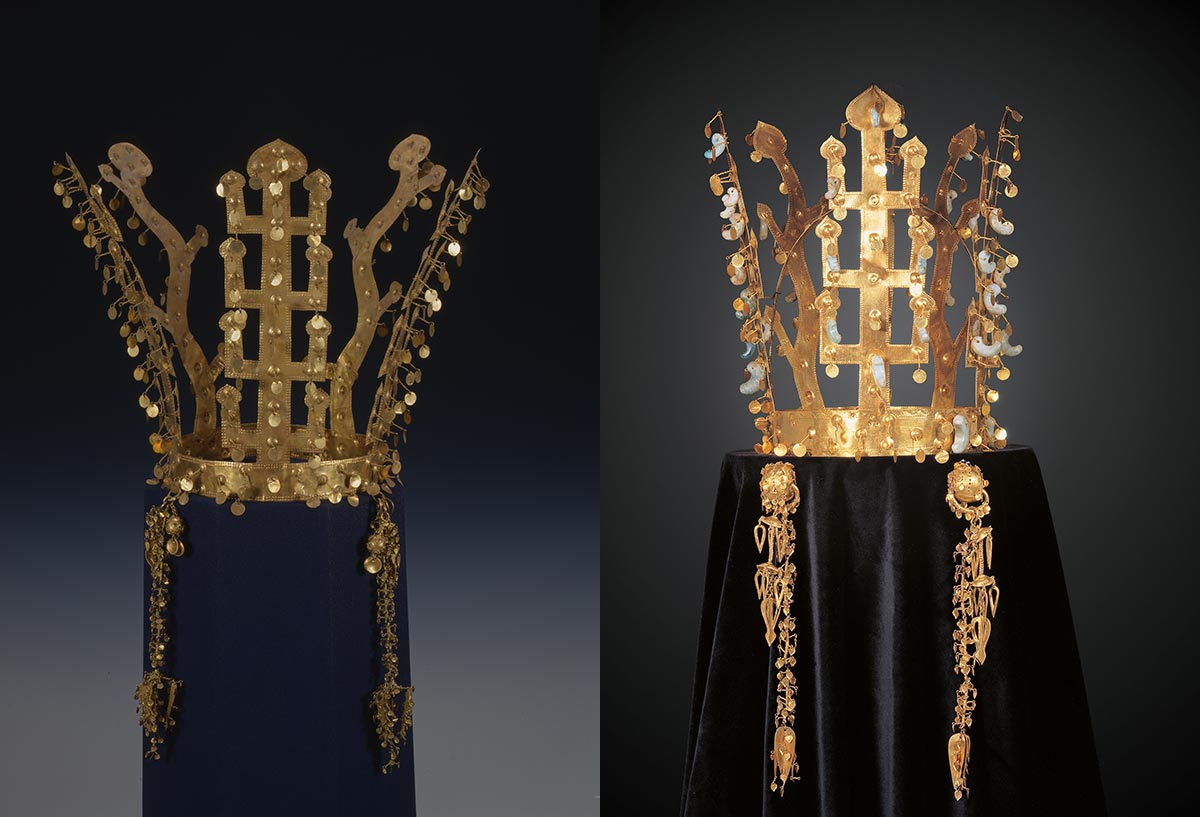 This may be the oldest Christian crown in history, made between the 4th and 5th century. Kept in Monza Cathedral, there is no clear knowledge for whom it was originally created. One legend says that it was commissioned by St. Helena, mother of Constantine the Great. Holy Roman Emperors of later centuries considered it to have been a relic from the Kingdom of the Lombards and used it for the coronation of the Emperor as King of Italy. 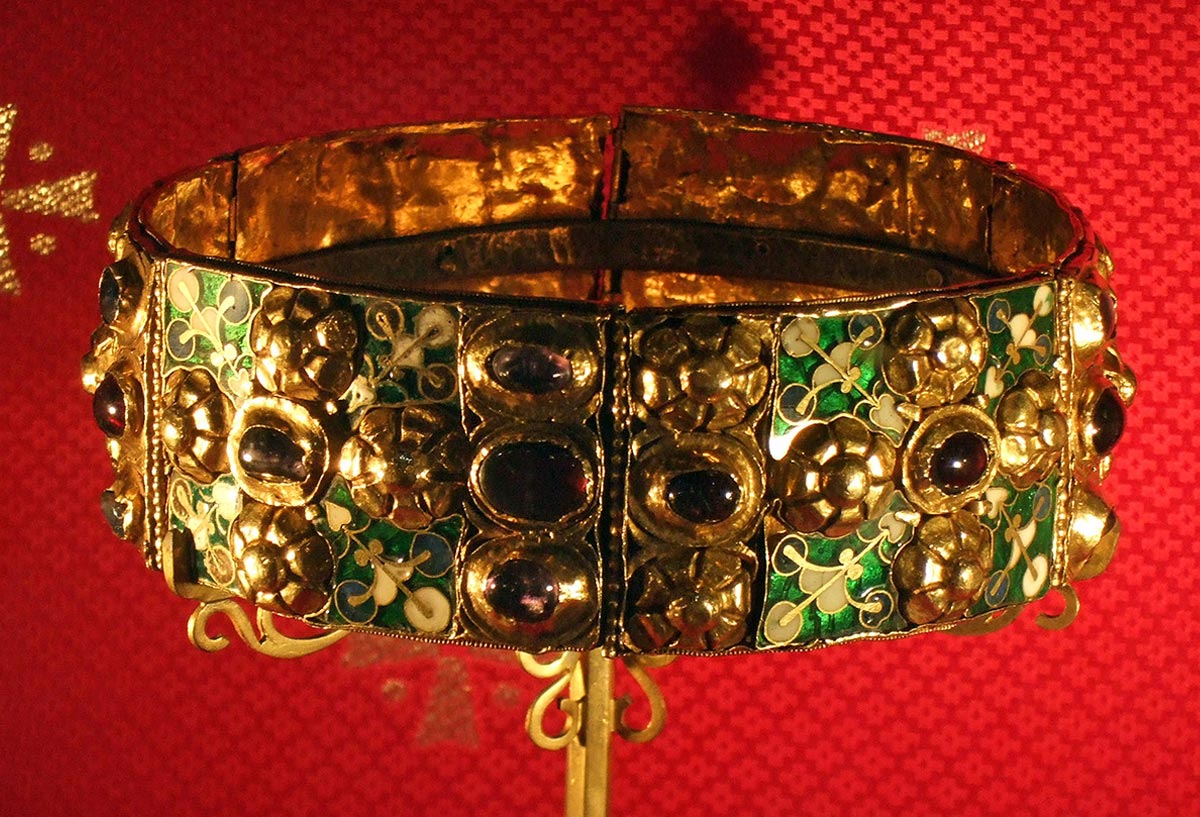 Following the death of Alexander the Great, Egypt was ruled by the Greek Ptolemaic dynasty. This incredible example of gold craftsmanship belonged most probably to a noblewoman of the ruling dynasty. Created between 220 to 100 BC in Alexandria, it displays typical Greek styles, with the centrepiece being a Herakles knot. 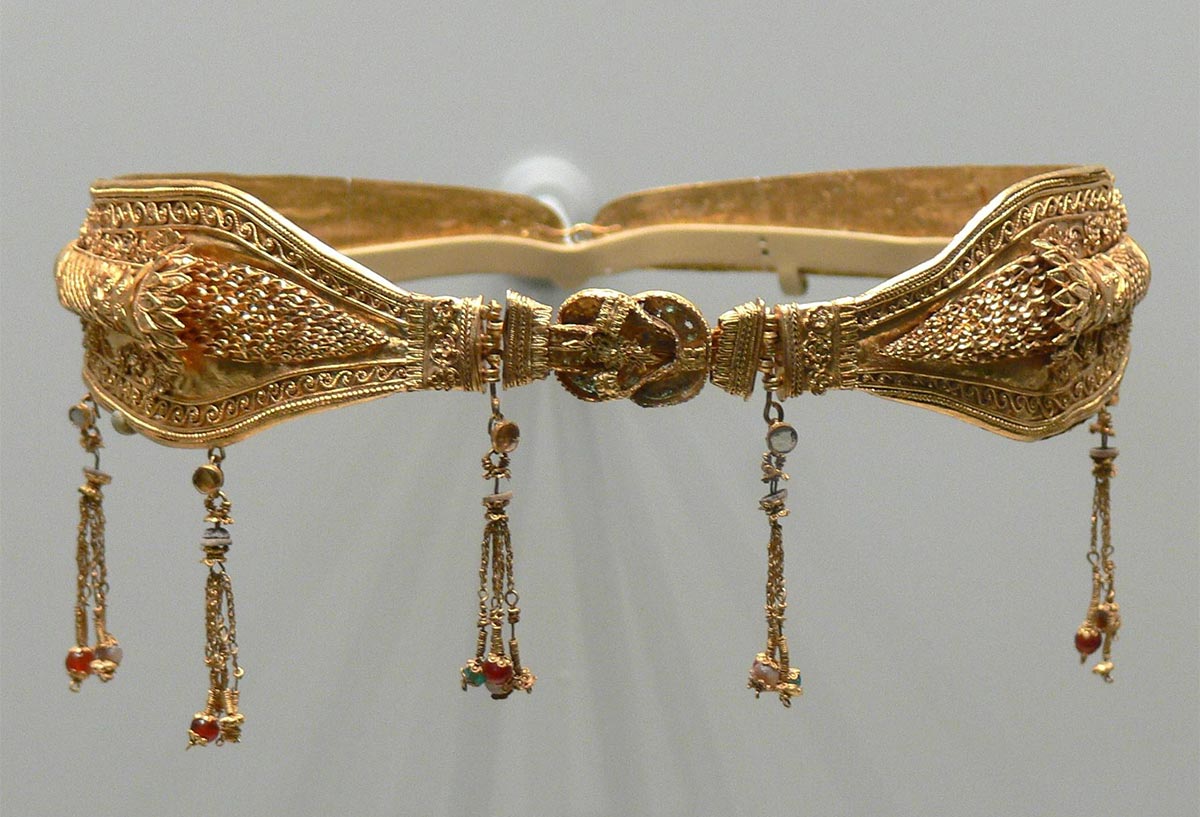 The ancient head adornment is the oldest crown on this list, belonging to the daughter an Ancient Egyptian King of the 12th Dynasty (possibly Senusret II). Her tomb had been broken into by grave robbers in previous centuries, though a niche in the burial site escaped the looters’ attention. Archeologists in the 20th century discovered boxes filled with jewellery, including the crown. 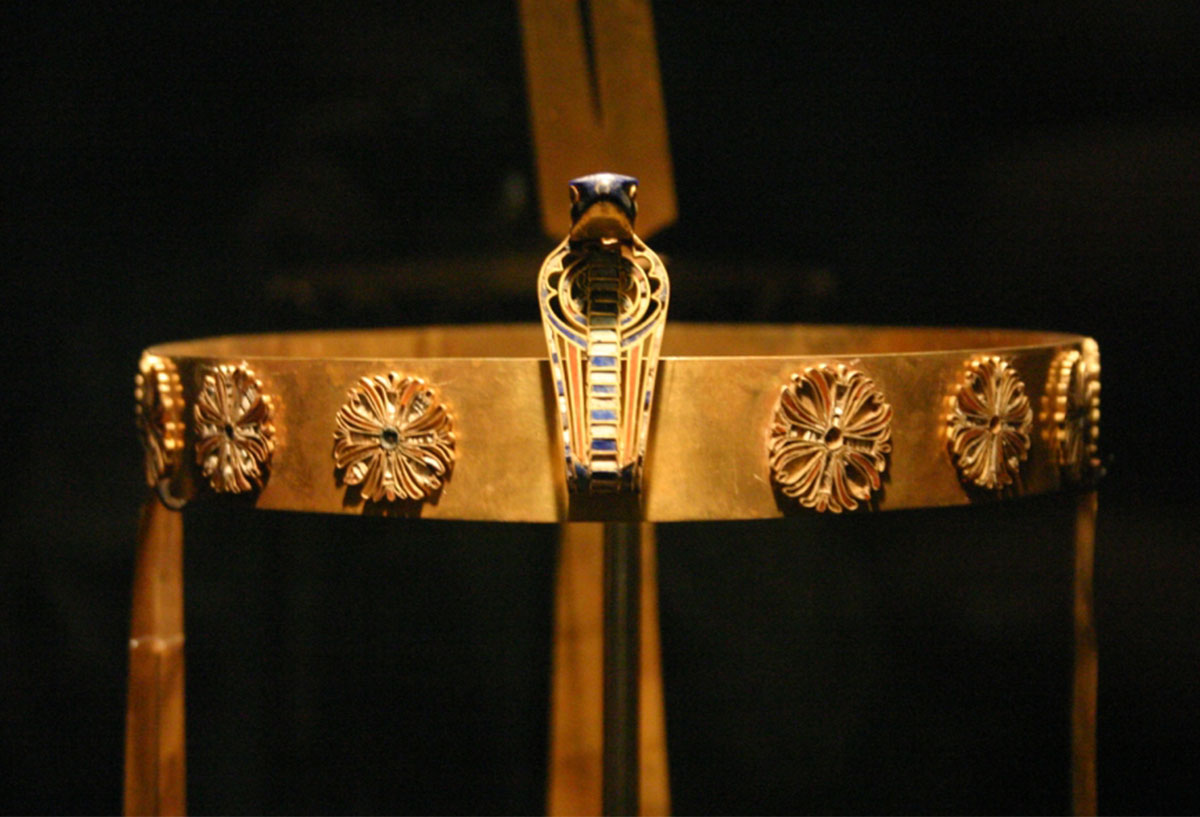