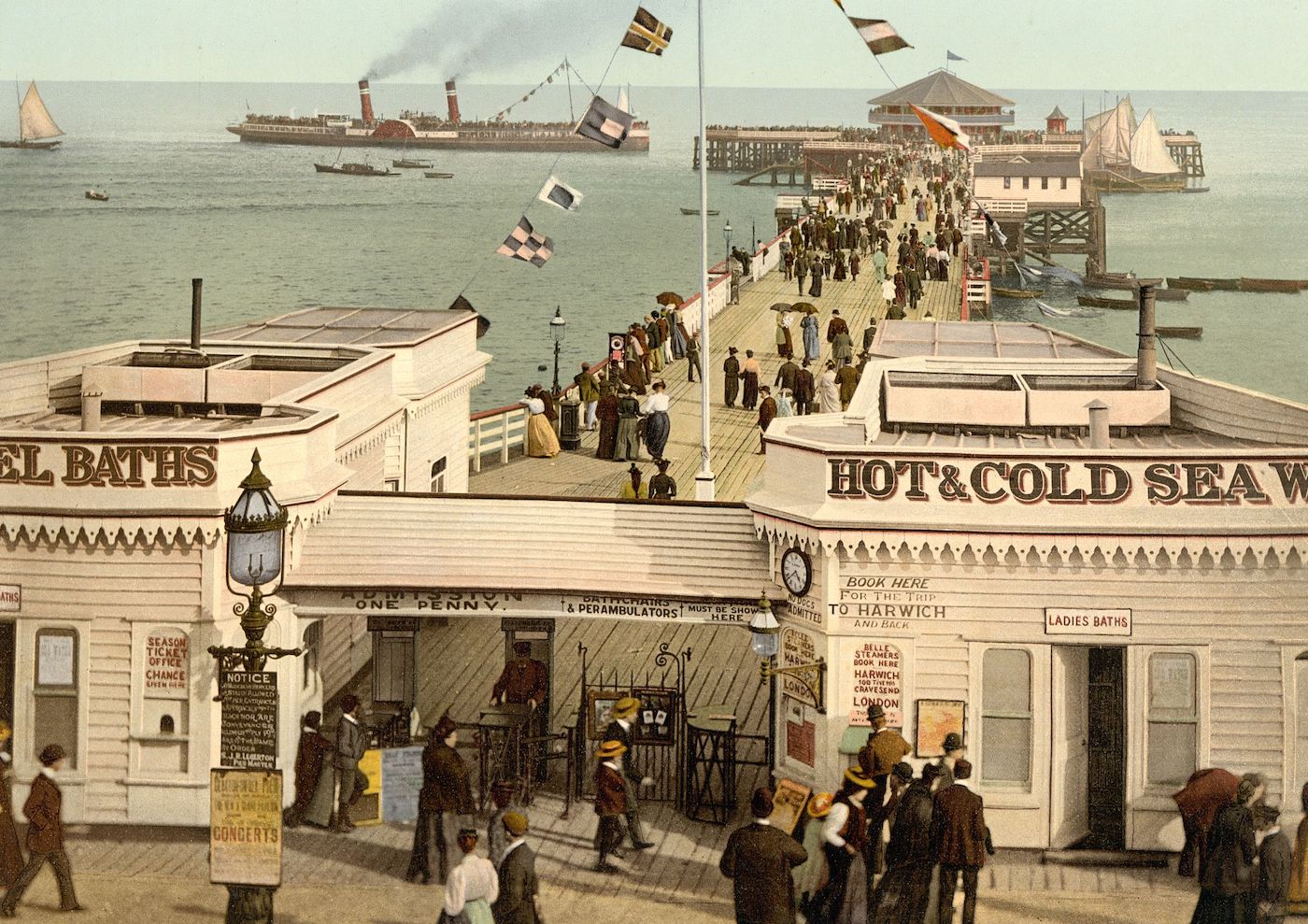 A vintage photograph of the pier at Clacton-on-Sea, UK, taken between 1890 and 1900.
Image Credit: Library of Congress via Wikimedia Commons / Public Domain

The story of Britain’s pleasure piers is one of invention and reinvention. In their prime – roughly from the Victorian era to the mid-20th century – Britain’s piers were a cherished staple of the country’s seaside resorts, opulent structures that drew in throngs of giddy visitors.

They grew from simple promenades into towering entertainment complexes, complete with restaurants, arcade games and rollercoaster rides. Fuelled by the rise of rail travel and made possible by developments in the use of iron, Britain’s piers once stood as a testament to the country’s engineering ingenuity.

But the second half of the 20th century was hard on Britain’s piers. As air travel grew increasingly more affordable, and successive fires and storms took their toll, many of Britain’s piers disappeared. Today, steps are being taken to restore the country’s piers to their former glory, with cherished favourites like those in Hastings and Clevedon recently reopening.

Piers first emerged in England as a form of transport infrastructure, carrying travellers from the shore to steamers out at sea. The very first was constructed in Ryde, on the Isle of Wight, in 1812, to carry passengers to and from ferries moored beyond the shallow coastline.

In this respect, Britain’s first piers were little more than a passing pitstop before the real holiday began. But over time, they grew into one of the most popular aspects of a British summer holiday. 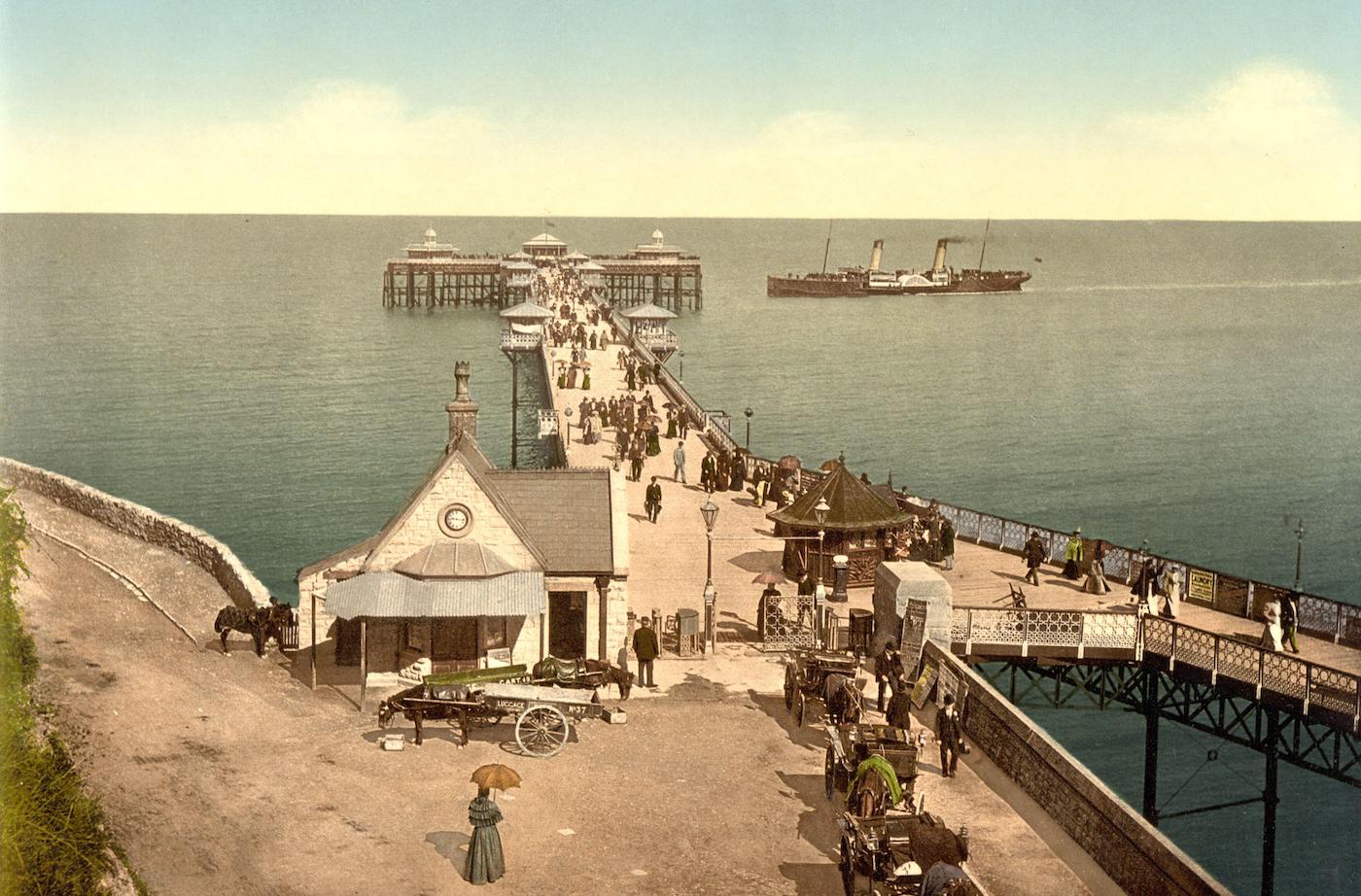 Vintage colour photo, c. 1890, of Llandudno Pier on the North Wales coast. It opened in 1877 and incorporated a landing stage for steam ships.

While upper-class travellers in the 19th century could afford to board ships further afield, less wealthy Britons were more likely to holiday closer to home. Luckily, as railway lines started to snake the country in increasing density, Britain’s coastline became ever more accessible to those living further inland.

With better accessibility, British seaside towns – particularly those in southern England – started to cater to growing numbers of holidaygoers. Hotels multiplied, swimming pools and theatres thrived, while promenades and pleasure piers proliferated around the country.

Just as Britain’s mastery of iron had made popular rail travel possible, it made rickety wooden piers a thing of the past. Suddenly, piers could be built to last, and eventually with the strength to hold thousands of visitors, seas of slot-machines and even whole amusement rides.

Even in summer, Victorian holidaygoers would don stiff crinoline dresses and stiflingly modest suits and frocks. And there was no better way for fashion-conscious Brits to show off their regalia than by promenading along the pier.

Indeed, before the popularisation of pier-top amusement arcades, piers were primarily a place to take a peaceful stroll out above the sea. Eventually, as engineering developments allowed for it, piers grew in size and extravagance. 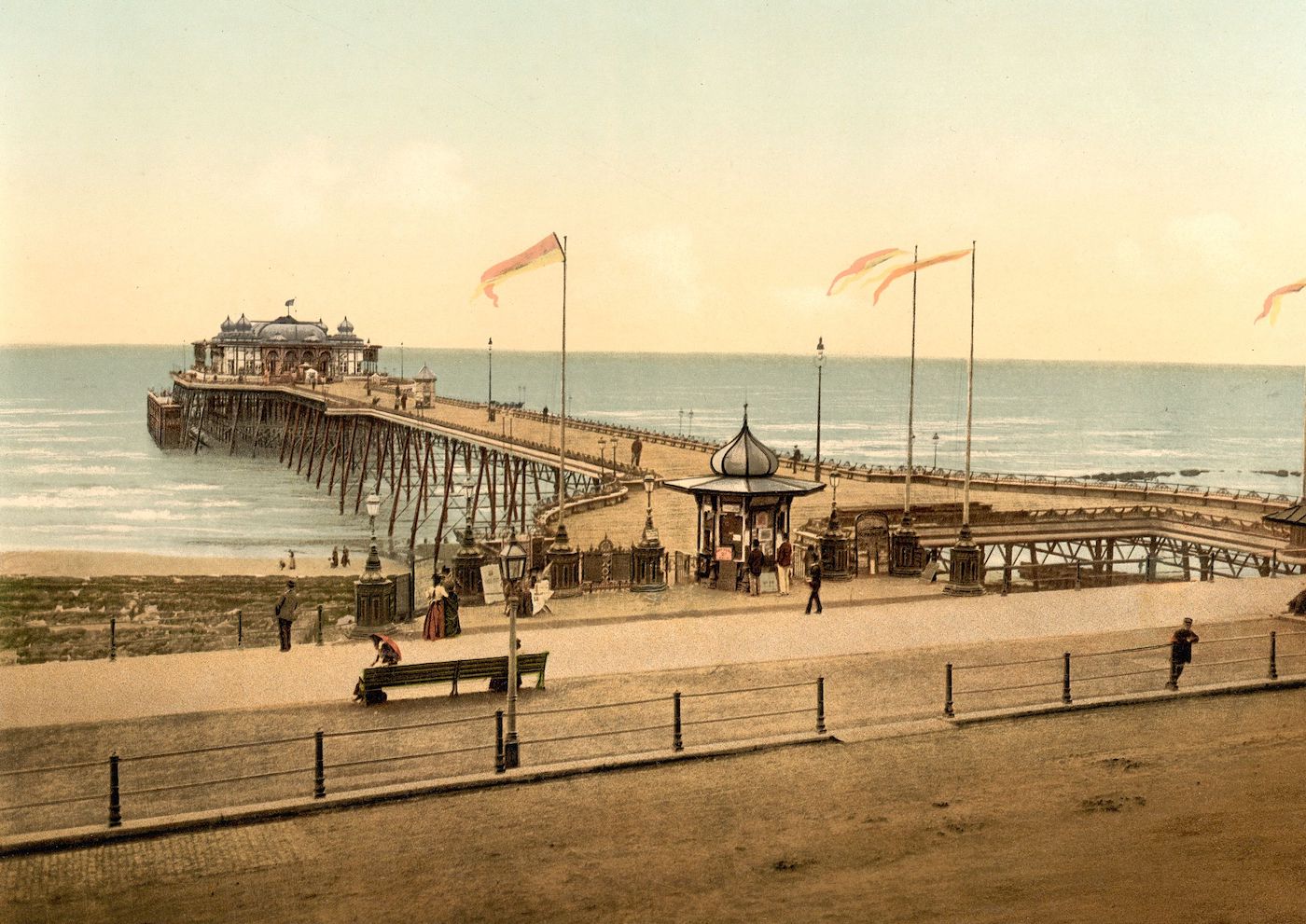 Bandstands were built to keep visitors entertained and to entice customers to pay the entrance fees. With a growing customer base came the arrival of food kiosks, even sit-down cafes and restaurants. Eventually, pier-top entertainment complexes became commonplace.

In 1872, for example, the purpose-built pleasure pier at Hastings opened, home to a pavilion with seating for 2,000 guests. It was one of dozens of piers that sprung up during the Victorian era and remained popular into the 20th century. 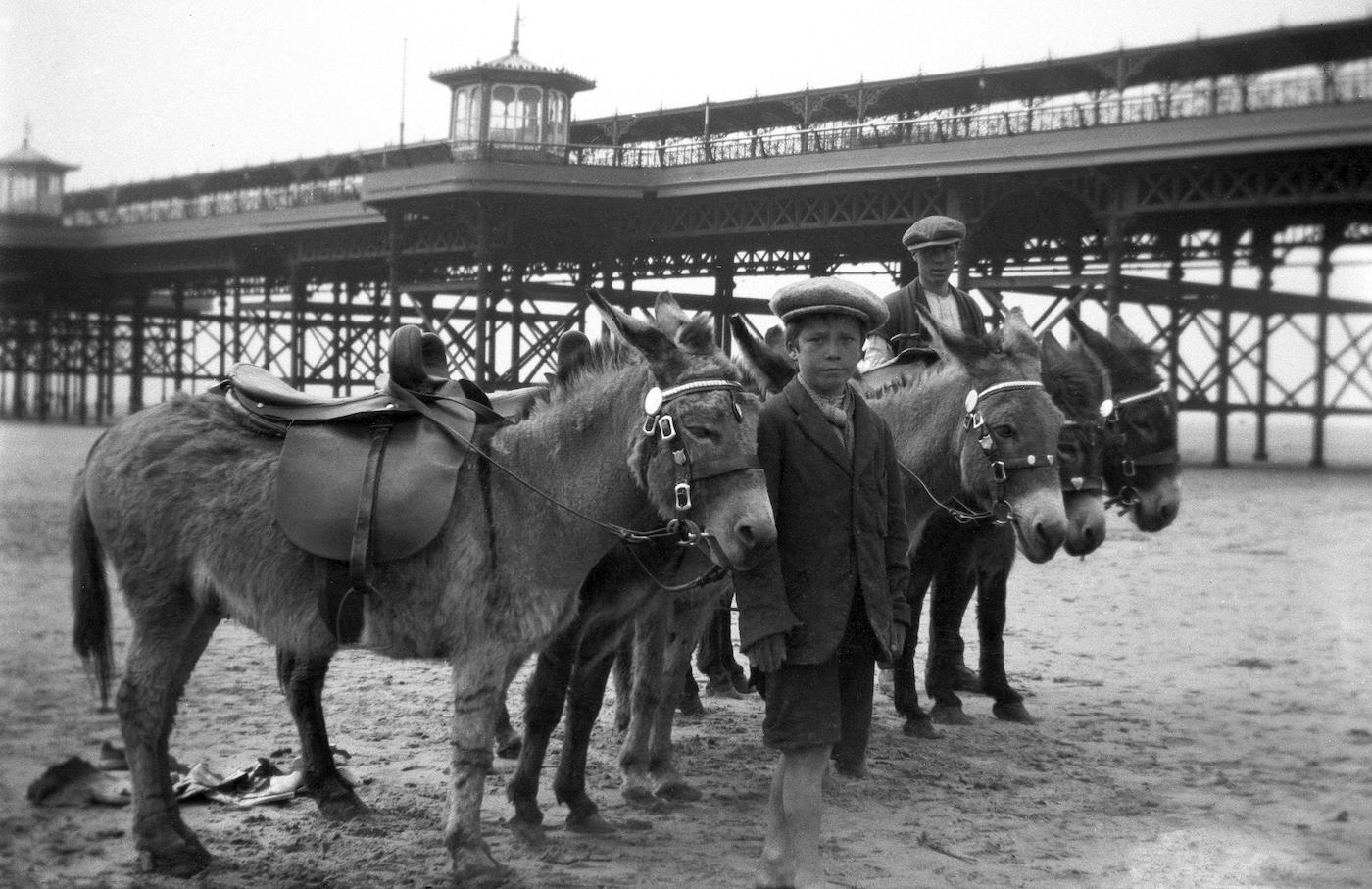 A young boy and young man, both wearing cloth caps, stand with their donkeys and wait for customers. England, UK, 1920s.

During the reign of Queen Victoria (1837-1901), the better part of 100 pleasure piers were built in Britain, chiefly in England and Wales on account of their warmer summers.

Amongst those that appeared were the Royal Pier in Aberystwyth (1865), Blackpool’s North Pier (1863) and an iron reconstruction of the Margate Jetty (1855), which had initially been built out of timber in 1824. 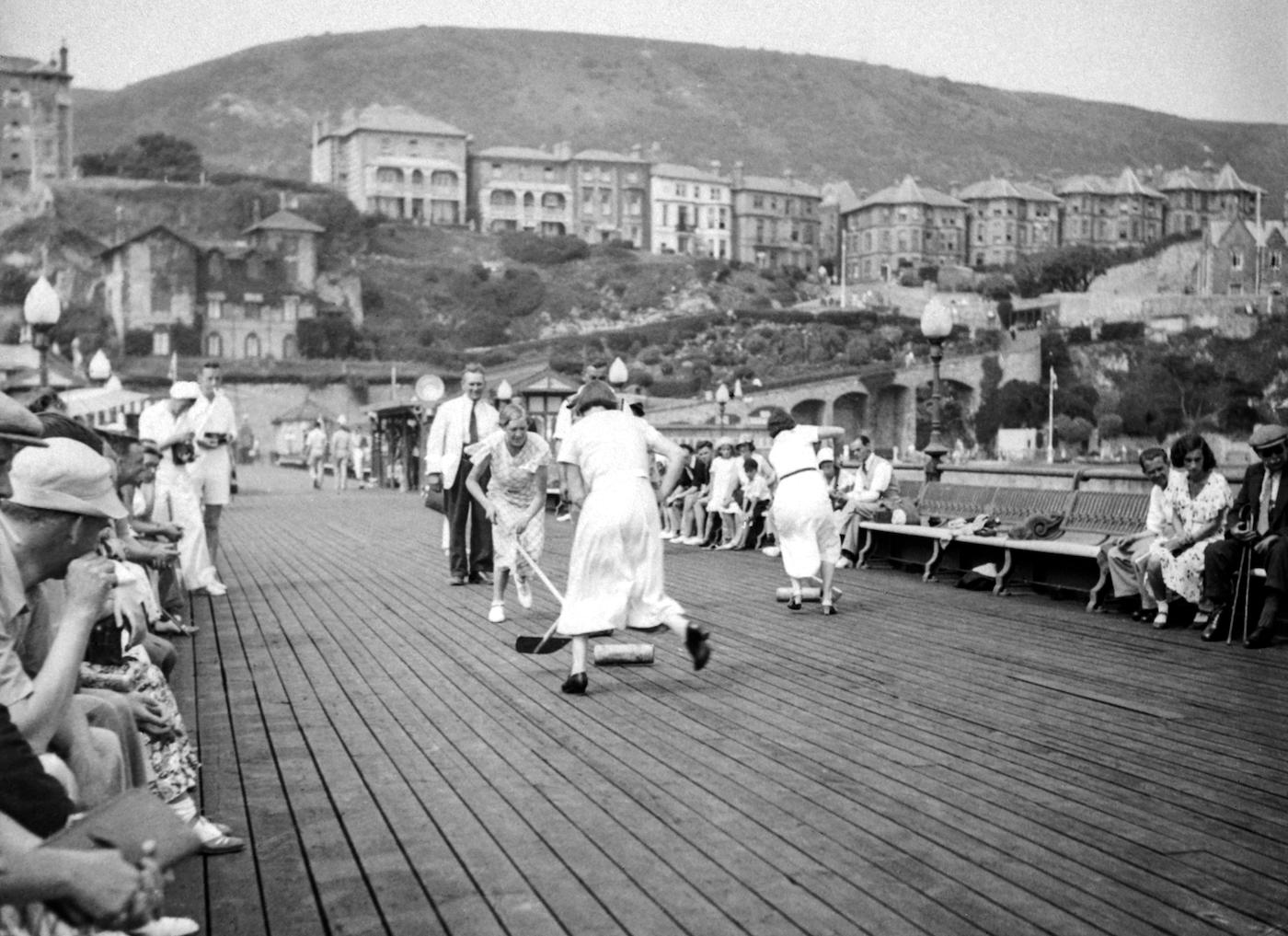 In Southend-on-Sea, Essex, the existing timber jetty was upgraded to a timber pier in the first half of the 19th century, and then renovated again using iron, opening in 1889.

Stretching more than 2km into the Thames Estuary, Southend Pier was – and still is – the longest pleasure pier anywhere in the world. On account of its length, it also gave rise to the first pier railway in Britain, with the Southend Pier Railway opening in 1890. In 1949, some 5 million people visited Southend Pier. 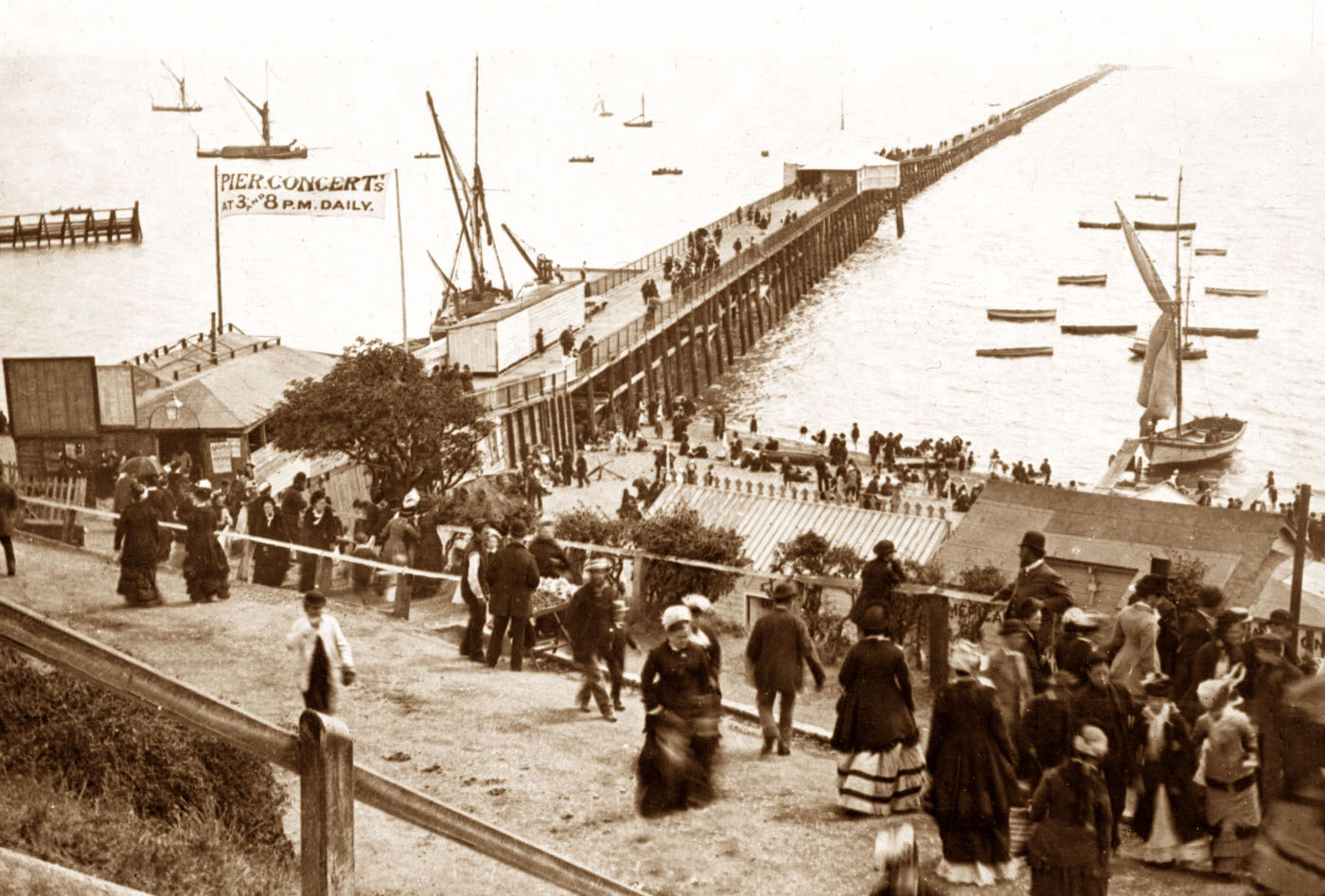 Another much-cherished pier to emerge in the Victorian era was Brighton’s West Pier. Designed by the celebrated architect Eugenius Birch, who had previously worked on railways in British India, Brighton West Pier was topped with ornate pavilions reminiscent of colonial Indian architecture.

But neither Brighton West nor Southend Pier would make it to the 21st century unscathed. They, like so many of Britain’s pleasure piers, were devastated by fires, mismanagement and decay during the 20th century.

During World War Two, many of Britain’s piers was intentionally destroyed to defend against invasion. When the conflict ended, their owners were left trying to pick up the pieces.

The second half of the 20th century then witnessed the rise of affordable air travel. Suddenly, British seaside resorts weren’t the most popular location for a summer holiday because places like Spain and the south of France were increasingly within reach.

This decline in popularity only exacerbated the decline of Britain’s piers. Profits plummeted, and many of the country’s piers fell into disrepair.

As well as financial difficulties, Britain’s piers have always battled with their innate vulnerability. Storms, crashing boats and vandalism have all posed a threat to British piers. Moreover, often lined with timber decking, many piers have been lost to fire over the years. 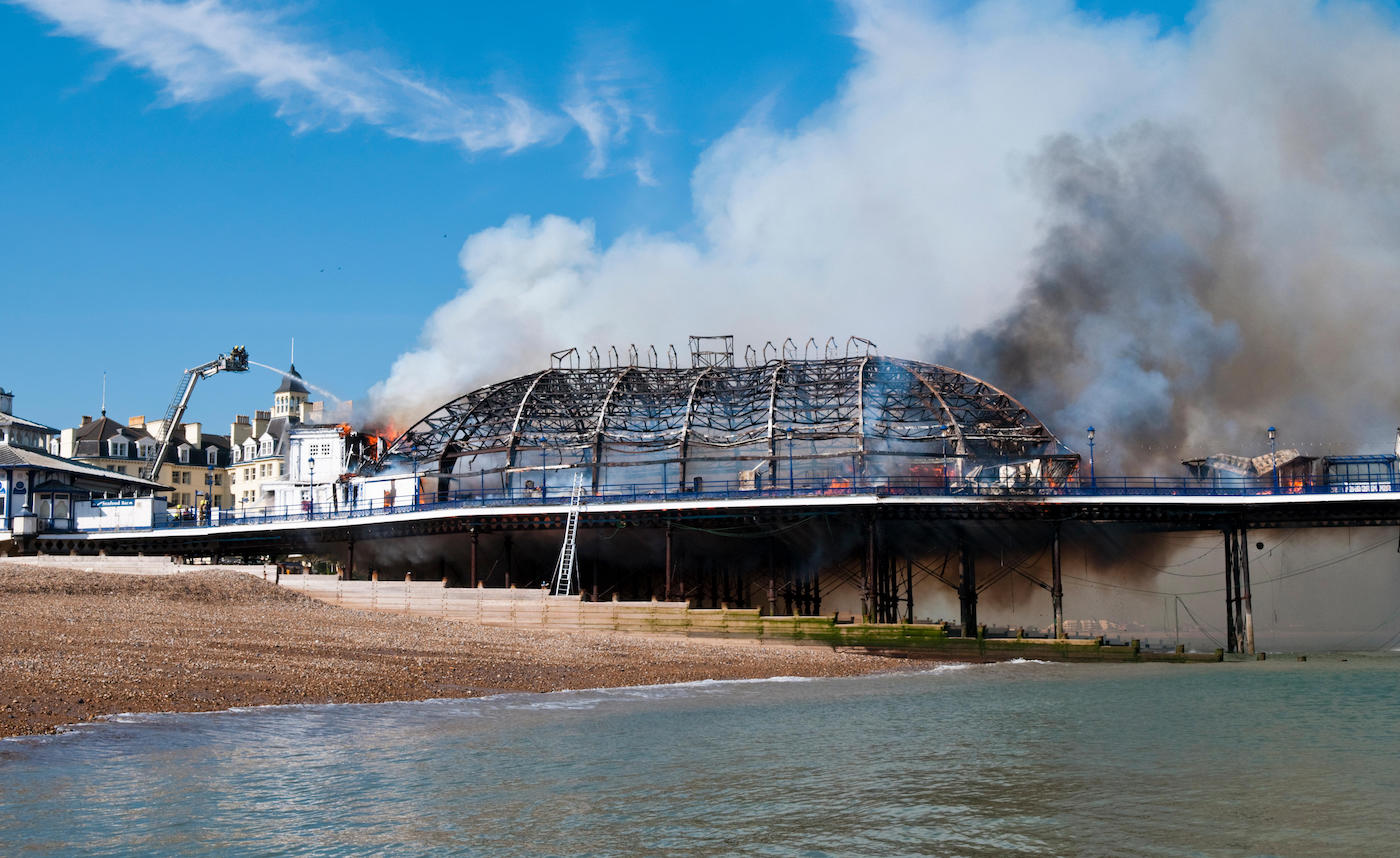 In 1904, Southsea South Parade burned down. It was subsequently rebuilt, only to suffer two more fires, one in 1966 and another in 1974, during filming for the Ken Russell film Tommy.

Infamously, Brighton West Pier closed to the public in 1975, after which point it was battered by several storms and blazes. All that’s left of it today is a sad, scorched metal shell. 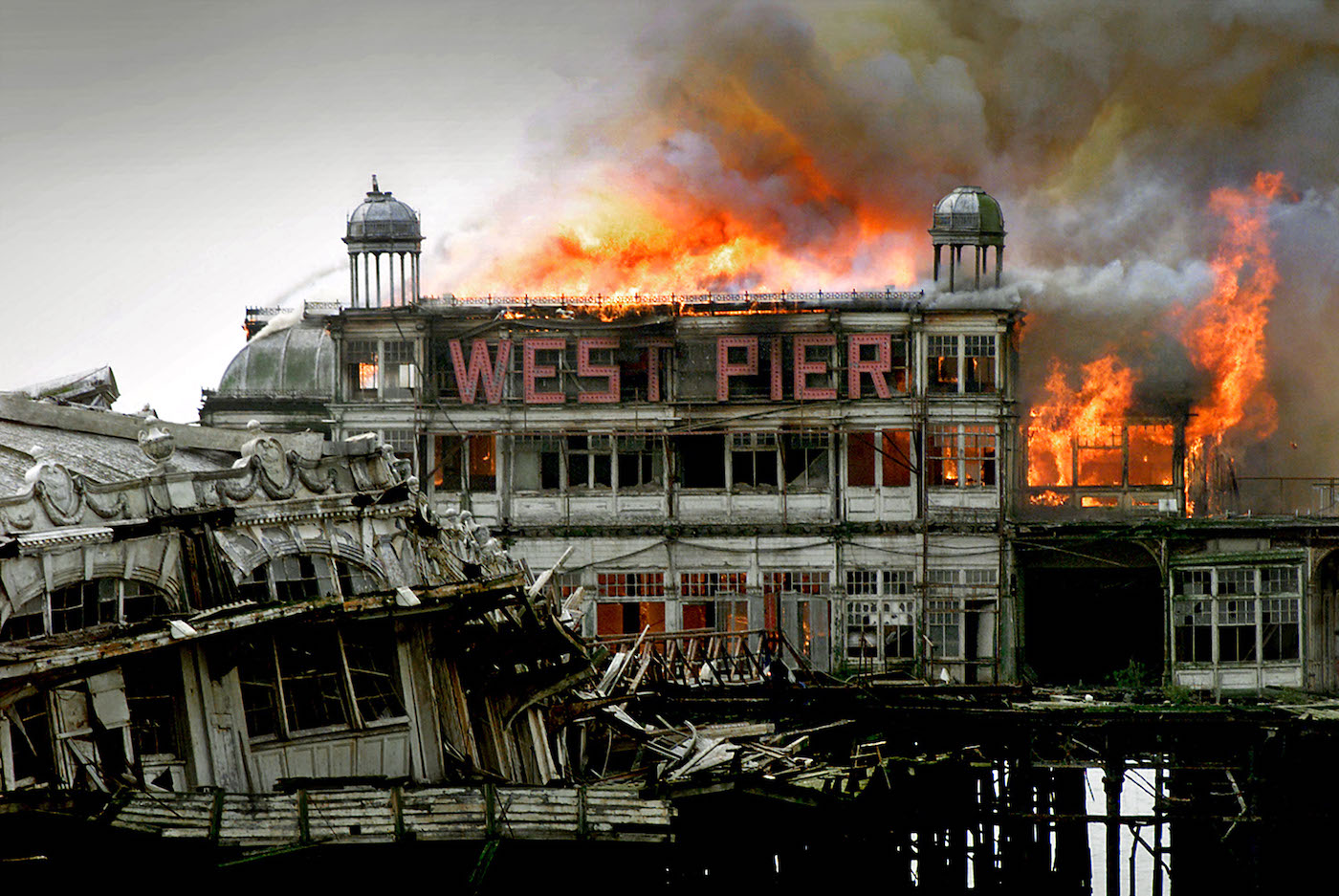 Despite the heavy toll of the 20th century on Britain’s pleasure piers, they have proven remarkably resilient, and for every Brighton West, there is a Clevedon Pier. Though Clevedon Pier, like Brighton West, fell derelict in the 1970s, it was rescued from demolition. After an extensive refurbishment, Clevedon Pier once again opened to the public in 1998. It is now a Grade I listed monument.

Similarly, Hastings Pier was decimated by fire in 2010. But it has since been rebuilt, reopening to the public in 2019. 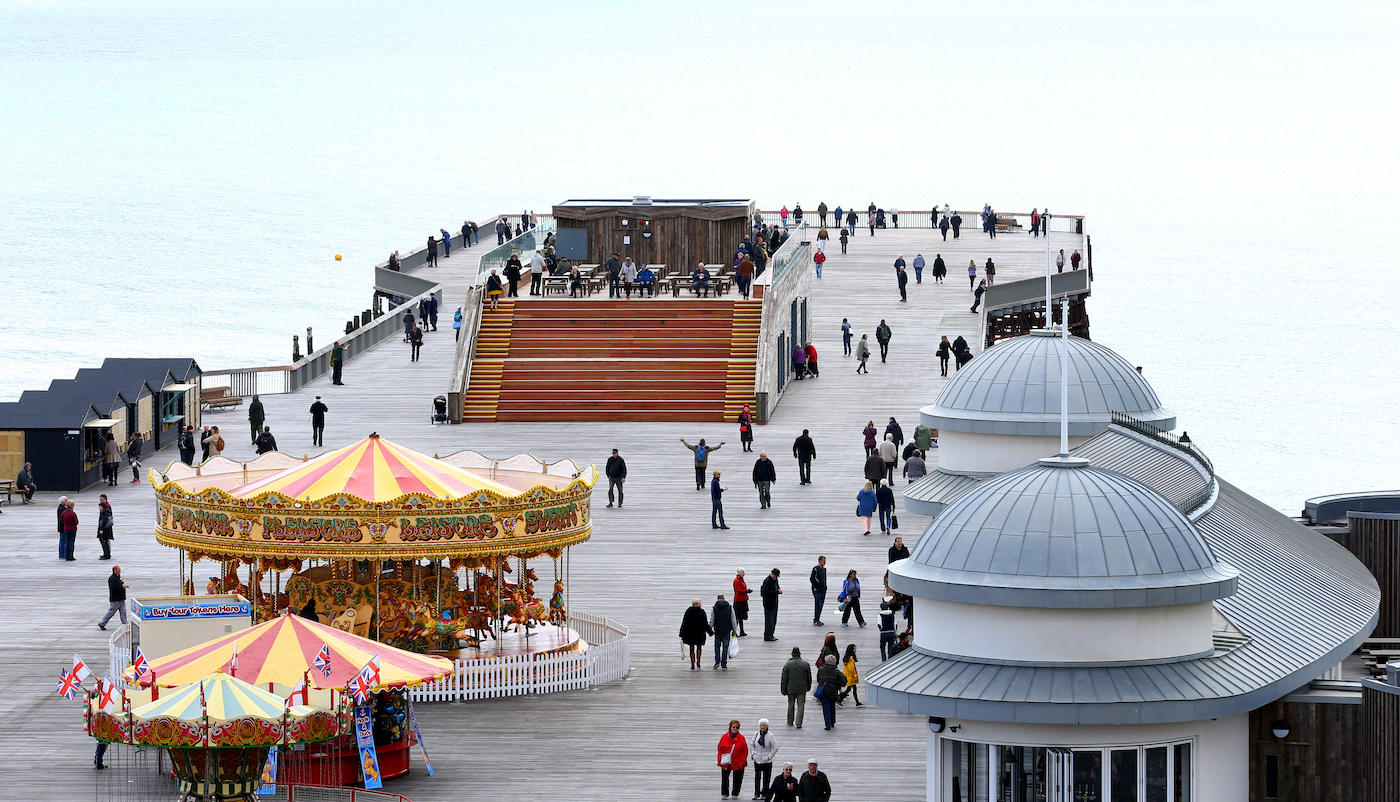 A view of Hastings Pier in East Sussex as it reopened to the public in 2016.

So, the story of Britain’s pleasure piers is not a simple tale of boom and bust. Though many have been lost along the way, those that survive represent a cherished British tradition that has endured through technological advances, the rise of air travel and the unrelenting passing of time and tide.