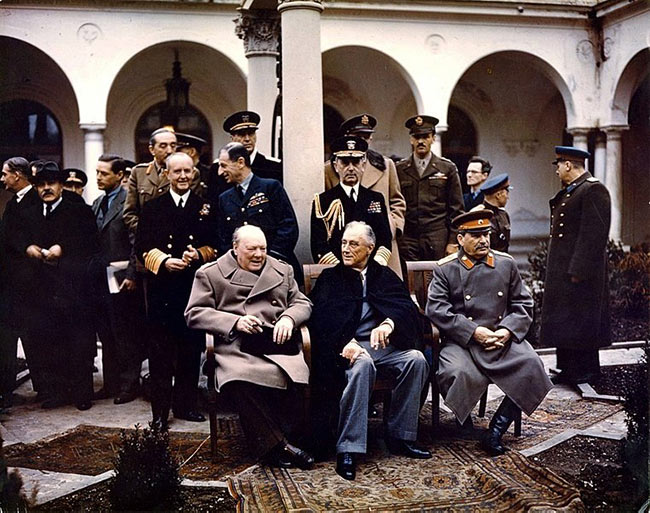 In February 1945 Winston Churchill, Joseph Stalin and Franklin D. Roosevelt met in Yalta on the Black Sea to discuss the re-establishment and re-organisation of European nations after the war. The Yalta Conference, as it became known, was the second of three meetings between Churchill, Stalin, and Roosevelt, and is considered the most controversial.

The Tehran Conference had happened prior in November 1943, and was followed by the Potsdam Conference in July 1945. Yalta was the last conference that Roosevelt would attend before his death in April 1945.

The conference was held in Yalta because Stalin was unwilling to travel very far. He was supposedly advised by his doctors that he should not take any long-haul trips. Stalin was also afraid of flying, a fear that was connected to his general paranoia.

By the time of the Yalta Conference, the Allies were assured of victory in Europe. Zhukov’s forces were a mere 65 kilometres from Berlin, having driven the Nazis out of the majority of Eastern Europe, while the Allies had control of the entirety of France and Belgium. 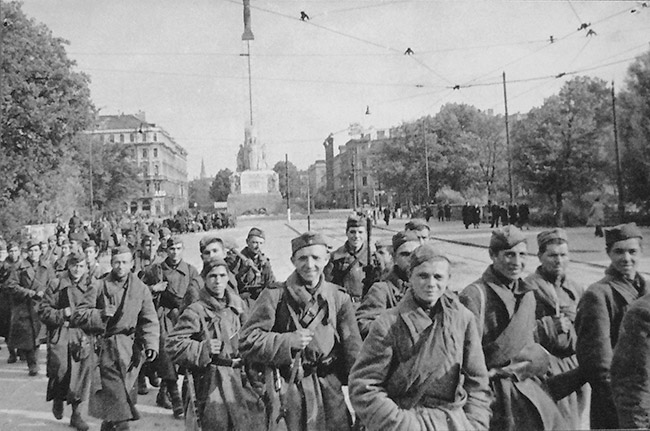 The goals of each power

Each leader aimed at different objectives for the post-war settlement. Roosevelt wanted Russian assistance in the war against Japan, and was prepared to concede influence in Europe if it meant that the lives of GIs could be spared in the Pacific theatre.

It should be noted that Roosevelt was under the impression that the Russians would be sorely needed to defeat the Japanese.

There is still historical dispute about whether the Japanese surrender was forced by the nuclear bombs or the Soviet establishment of a second front in the Pacific.

Consensus is shifting slowly towards the Soviet attack on Manchuria and the northern islands of Japan as the key factor in ending the war with unconditional Japanese surrender.

The American delegation also wanted Soviet participation in the United Nations, which was set to be created after the end of the war.

Churchill wanted democratic governments created by free elections in Eastern and Central Europe and to contain the Soviet share of the postwar settlement as much as was feasibly possible.

It was difficult to assure the independence of nations such as Poland, despite Polish assistance in the RAF and the British army more generally. The Red Army had overrun Eastern Europe during Operation Bagration, and was essentially at Stalin’s mercy.

Stalin wanted the inverse, and pushed for greater Soviet control and influence over the postwar makeup of Eastern Europe. This was a critical part of the USSR’s security strategy.

The issue of Poland

Much of the debate centred around Poland. The Allies were keen to press for Polish independence because of the assistance of Polish troops on the Western front.

As mentioned however, the Soviets held most of the cards when it came to negotiations over Poland. According to one member of the U.S. delegation, James F. Byrnes, “it was not a question of what we would let the Russians do, but what we could get the Russians to do.”

“…because the Russians had greatly sinned against Poland, the Soviet government was trying to atone for those sins. Poland must be strong [and] the Soviet Union is interested in the creation of a mighty, free and independent Poland.”

This ultimately meant that the USSR kept the territory it had annexed in 1939, and instead Poland’s territory would be extended at the expense of Germany.

Stalin promised that there would be free Polish elections whilst establishing a Soviet sponsored provincial government in Polish territories occupied by the Red Army.

Stalin did also eventually agree to entering the Pacific war three months after the defeat of Germany, provided that he could recover lands that the Russians had lost to the Japanese in the Russo-Japanese war of 1904-1905, and that the Americans recognised Mongolian independence from China. 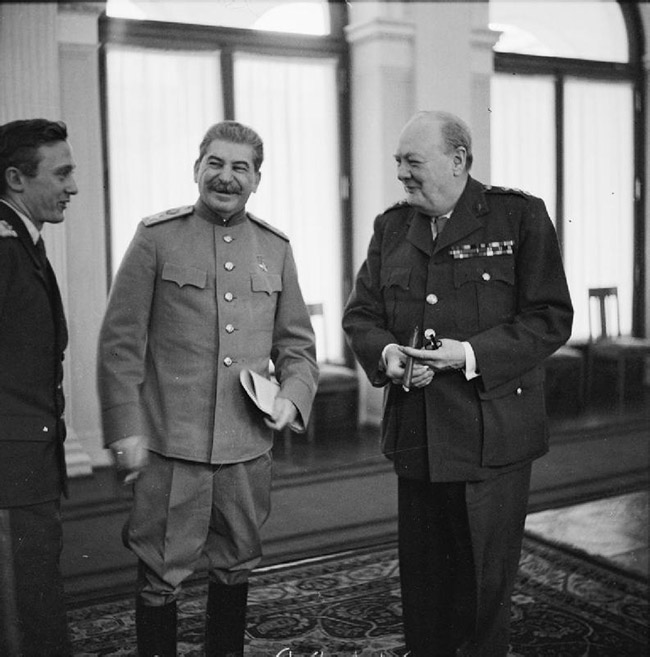 Winston Churchill shares a joke with Marshal Stalin (with the help of Pavlov, Stalin’s interpreter, left) in the conference room at Livadia Palace during the Yalta Conference. Credit: Imperial War Museums / Commons.

The Mongolian People’s Republic had been a Soviet satellite state since its creation in 1924.

The Soviets also agreed to join the United Nations, provided that the UN employed the Security Council system wherein it could veto any unwanted decisions or actions.

Each power also ratified an agreement around the division of postwar Germany into zones. The USSR, USA and the UK all had zones, with the UK and the USA agreeing to subdivide their zones further to create a French zone.

General Charles de Gaulle was not allowed to attend the Yalta conference, which he attributed to longstanding tension between him and Roosevelt. The Soviet Union also were unwilling to accept the French representation as full participants.

Since de Gaulle did not attend Yalta, he also could not attend Potsdam, as he would have been honour-bound to re-negotiate issues discussed in his absence at Yalta. 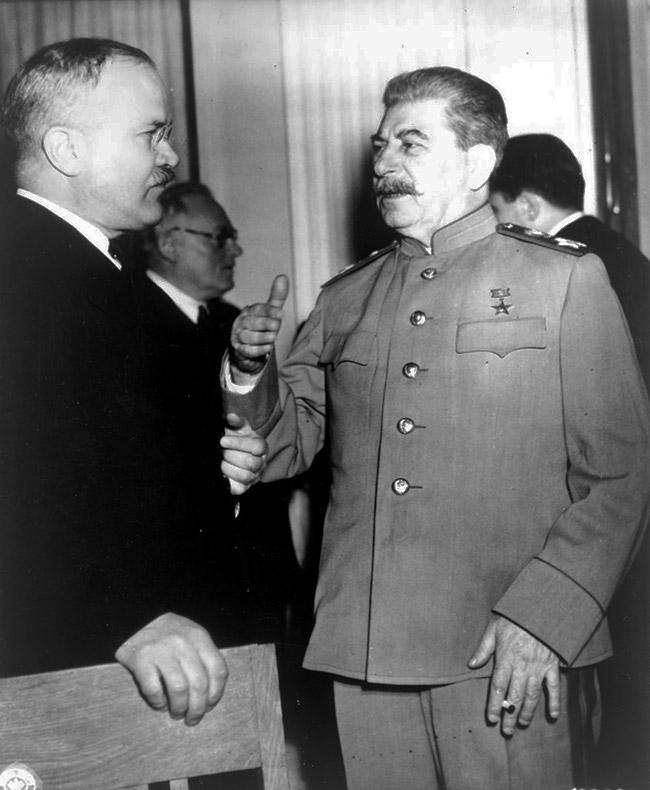 Joseph Stalin gesturing as he speaks with Vyacheslav Mikhaylovich Molotov during the conference at Yalta. Credit: National Museum of the U.S. Navy / Commons.

By mid-March, the U.S. ambassador to the U.S.S.R. messaged Roosevelt to argue that:

“…the Soviet program is the establishment of totalitarianism, ending personal liberty and democracy as we know it.”

Roosevelt realised that his view of Stalin had been excessively optimistic and conceded that “Averell is right.”

A communist government was installed in Poland on the end of the war, and many Poles in England and elsewhere felt betrayed by their allies. 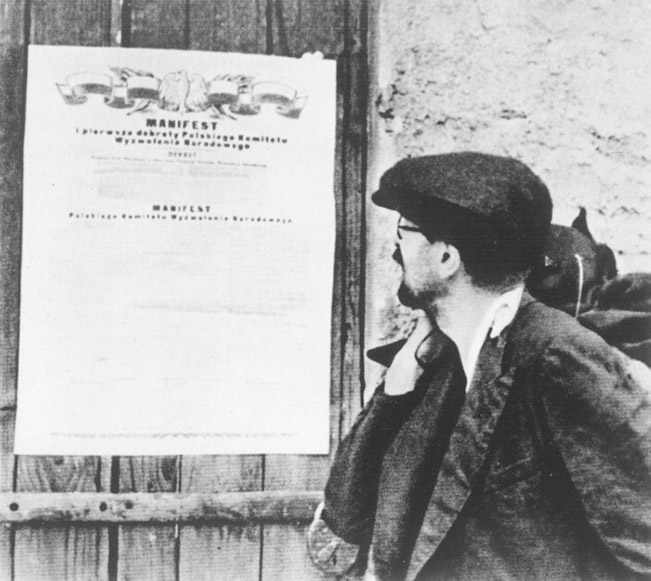 A propaganda photo of a citizen reading the PKWN Manifesto.The PKWN was the Polish Committee of National Liberation, also known as the Lublin Committee. It was the puppet provisional government of Poland. Credit: Commons.

The NKVD arrested many Polish opposition leaders who had been invited to participate in negotiations for a provisional government. They were taken to Moscow, forced through a show trial and sent to the Gulag.

The Russians consolidated control over Poland, which became a full communist state in 1949.

While Yalta was initially celebrated as proof that the US and Soviet wartime co-operation through lend-lease and the like could be continued into the postwar period, it became more controversial with Russian actions towards eastern Europe.

Stalin broke his promise of free elections, and installed Soviet-controlled government in the region. Western critics alleged that Roosevelt had “sold out” eastern Europe to the Soviets. 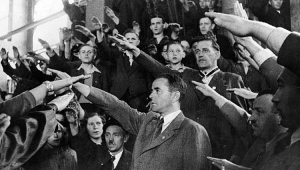 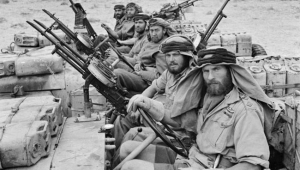 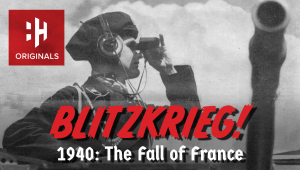 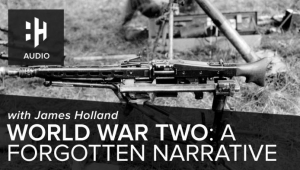 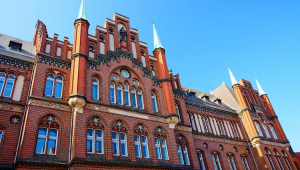 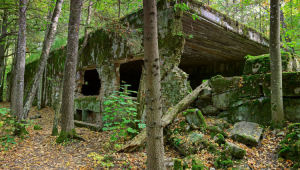