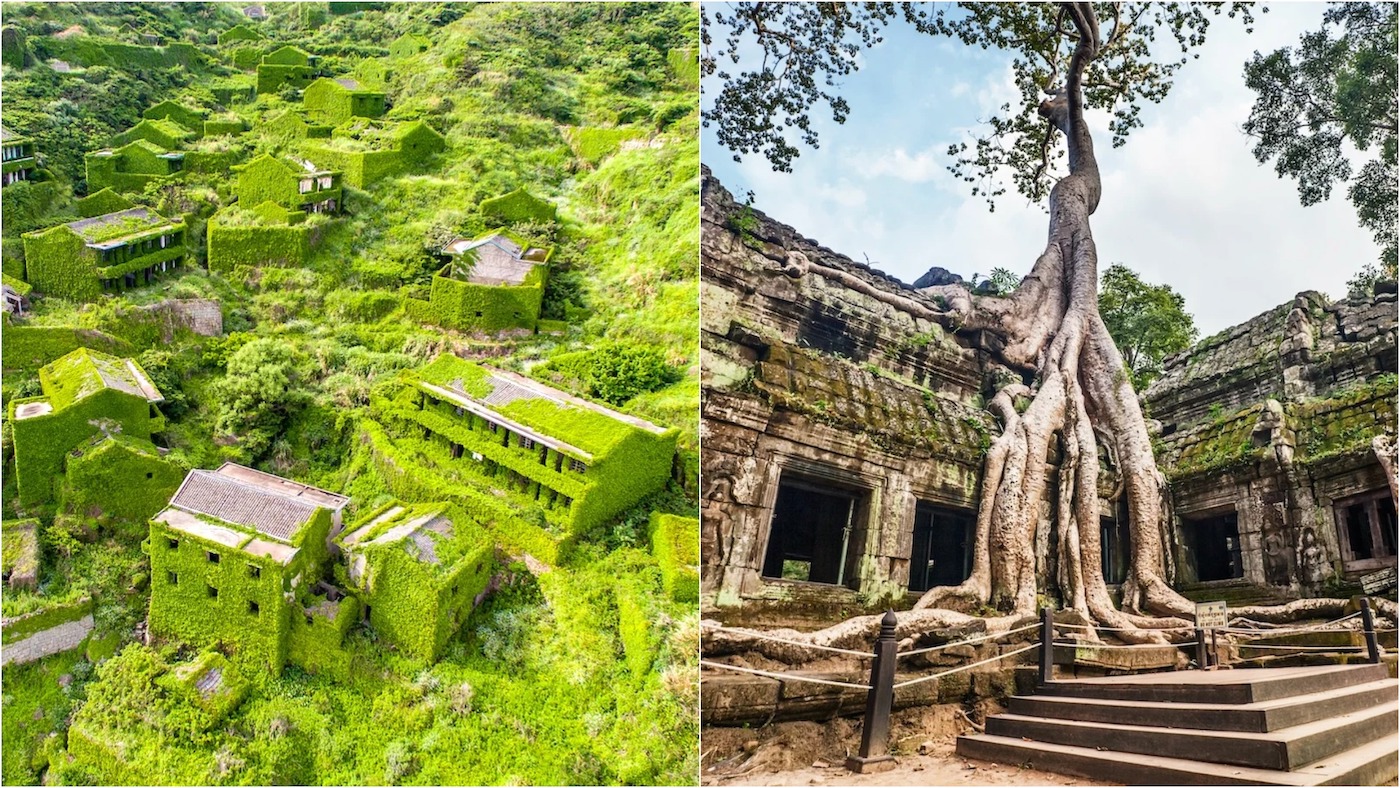 Over the course of human history, countless thriving cities have been lost, destroyed or deserted. Some were swallowed up by rising sea levels or flattened by natural disasters, while others were razed by invading forces. On occasion, cities were simply abandoned by their inhabitants who deemed it too difficult or draining a place to call home.

But what happens when a city is left eerily abandoned, its homes and buildings still standing without anybody to call them home? Nature takes over. Moss coats crumbling buildings, sand dunes swallow up whole houses and trees and animals clamber over once busy walkways.

From a former mining town swallowed up by the Namib desert to a rabbit-infested Japanese island, here are 8 historic cities and settlements that have been reclaimed by nature. 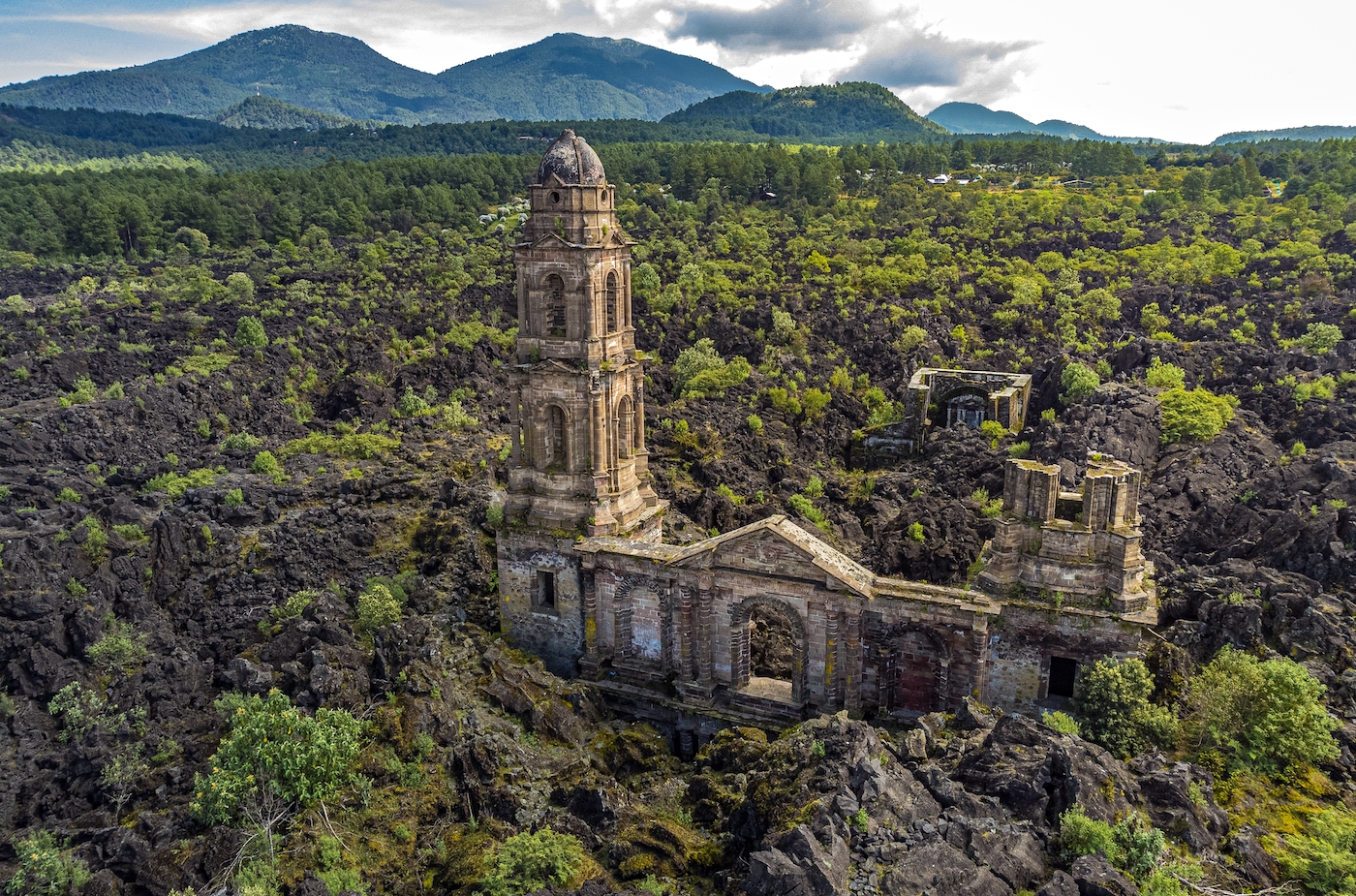 On 20 February 1943, the ground near the Mexican settlement of San Juan Parangaricutiro started to shake, ash began to fill the air, and the town’s church bells started to ring uncontrollably. A nearby volcano, Parícutin, was erupting. Lava began to flow, making its way into the surrounding fields. Thankfully, the people of San Juan Parangaricutiro managed to evacuate before the lava hit – which took around a year after the initial eruption – and nobody there was killed.

The town was devastated by the eruption, however, with its shops and houses consumed by the flow of molten rock. When the lava cooled and dried, the church’s spire was all that remained standing, towering over the blackened landscape. The people of San Juan Parangaricutiro then set about building a new life for them nearby, while their former home eventually grew into a popular tourist attraction. People from far and wide come to clamber over the rock to see San Juan Parangaricutiro’s resilient church spire and facade. 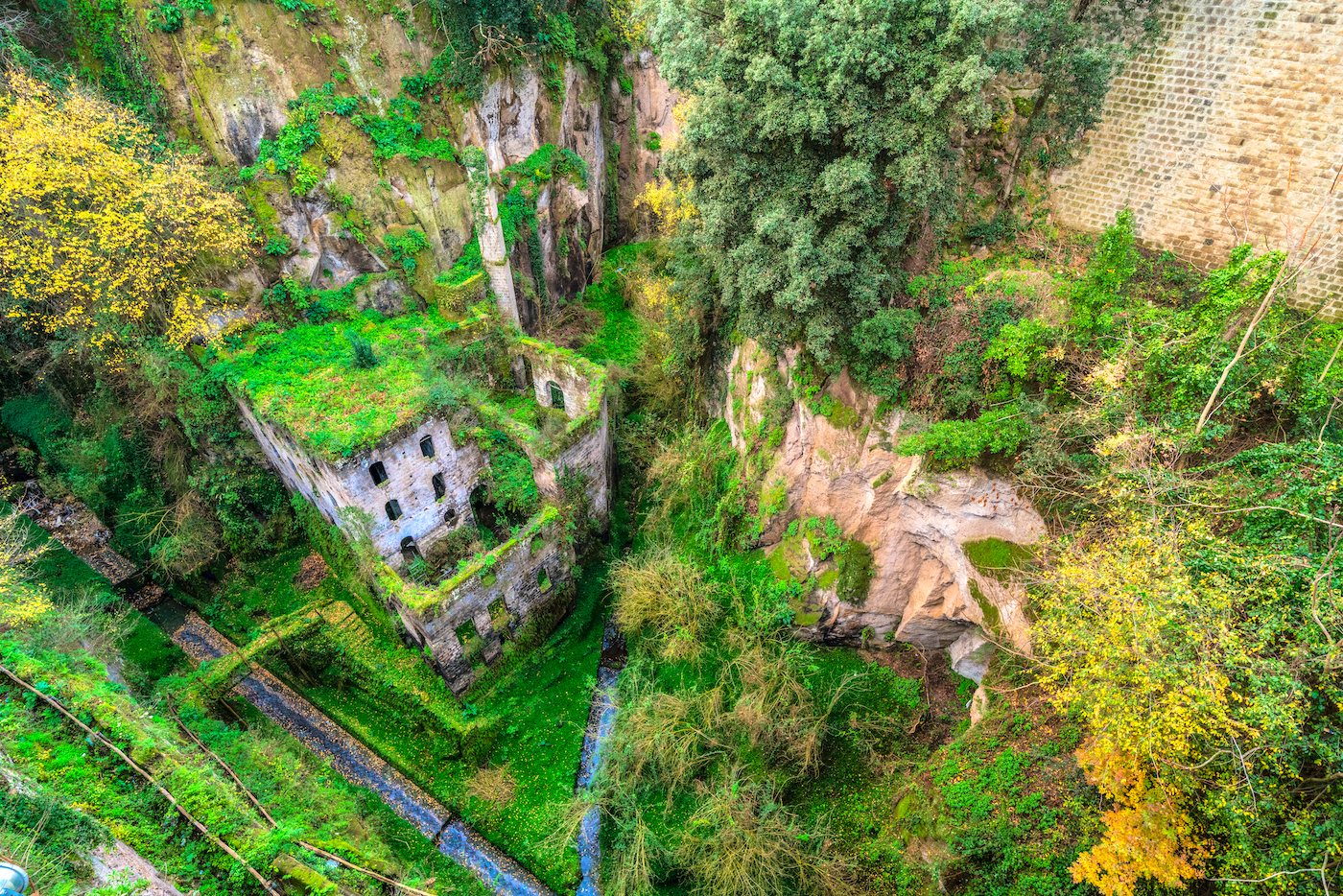 Since as early as the 13th century, Italy’s Valle dei Mulini, which translates to Valley of Mills, was home to a number of prosperous flour mills that supplied the surrounding area with ground wheat. The mills were built at the bottom of a deep valley to make use of the stream that runs through its base.

Other industrial buildings soon followed the flour mills, with a sawmill and a wash house also constructed in the valley. But the flour mill was rendered obsolete when modern pasta mills began to populate the wider area. In the 1940s, the Valle dei Mulini’s buildings were abandoned, and they remain so to this day. They’re best viewed from Viale Enrico Caruso, from which visitors can peer down upon the once-thriving industrial plants. 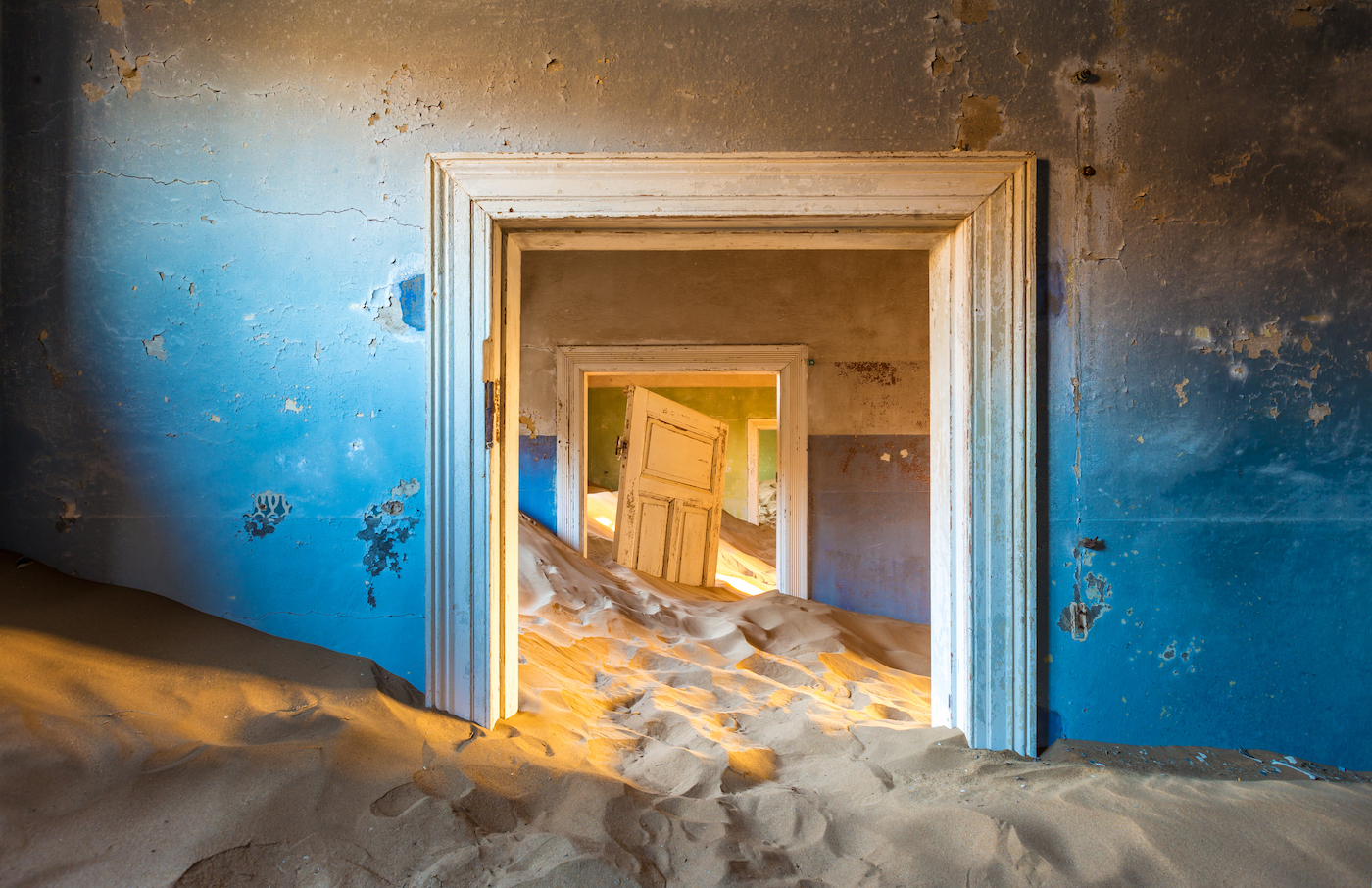 The town of Kolmanskop’s story begins in 1908, when a railway worker spotted some glimmering stones amongst the sprawling sands of the Namib desert in southern Africa. Those precious stones turned out to be diamonds, and by 1912 Kolmanskop had been built to house the region’s blossoming diamond mining industry. At its height, the town was responsible for more than 11% of the world’s diamond production.

Despite uprisings and violent territorial disputes, the town’s colonial German prospectors earned vast riches from the enterprise. But the boom wouldn’t last forever: the discovery of bountiful diamond fields to the south in 1928 saw Kolmanskop’s inhabitants abandon the town en masse. Over the following decades, its few remaining residents left, and the town was swallowed up by the dunes that had once supplied the reason for its existence. 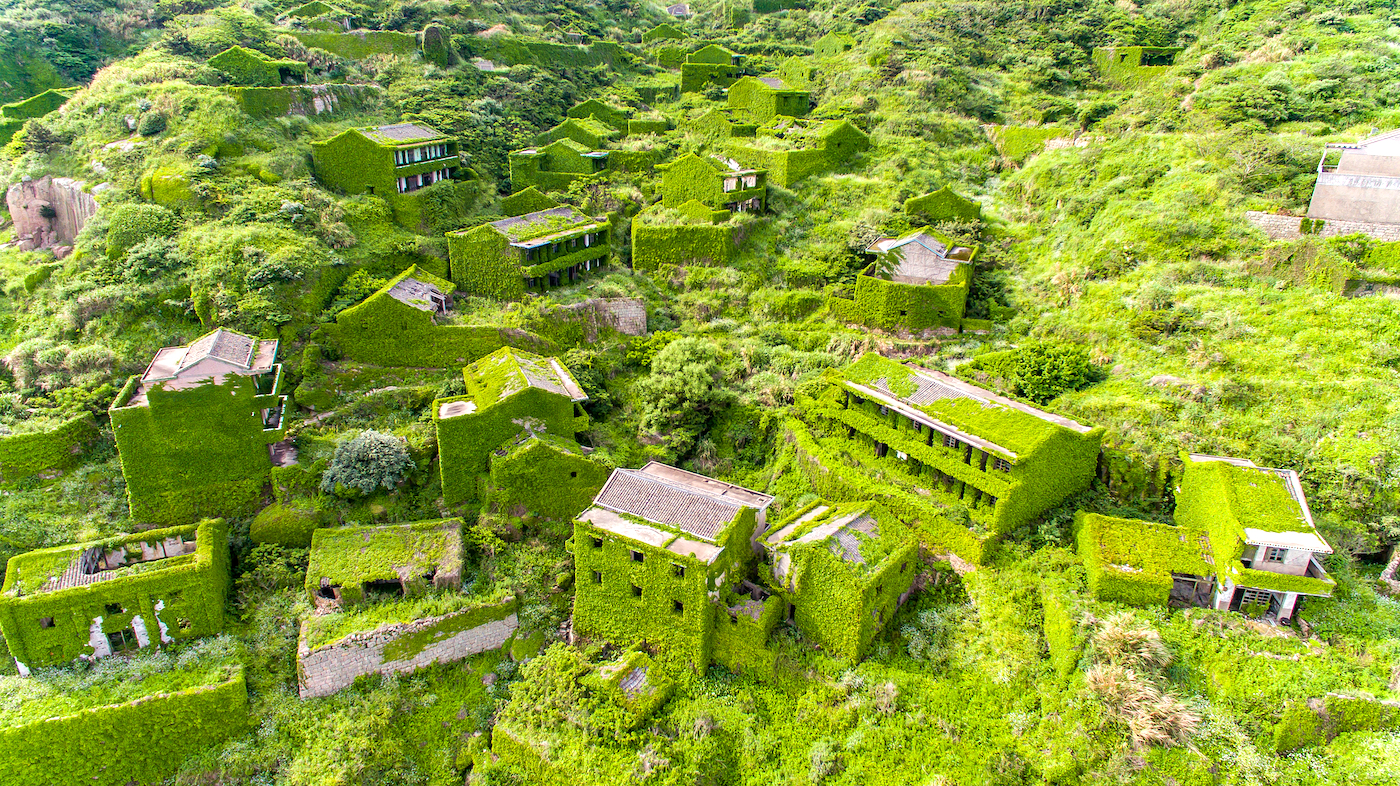 Aerial view of the abandoned fishing village Houtouwan in China.

The village of Houtouwan, on eastern China’s Shengshan Island, was once home to a thriving fishing community of several thousand. But its relative isolation and limited schooling options saw its population steadily decline in the late 20th century. In 2002, the village was officially closed and the last of its residents moved elsewhere.

With Houtouwan’s human inhabitants gone, nature took over. Its cliff-side properties, rising up the island’s hills to peer over the coast, were soon coated in lush greenery. Since then, the settlement has seen something of a resurgence, though not as a place to live. Tourists now flock to the town in droves to explore its abandoned homes and spectacular scenery. 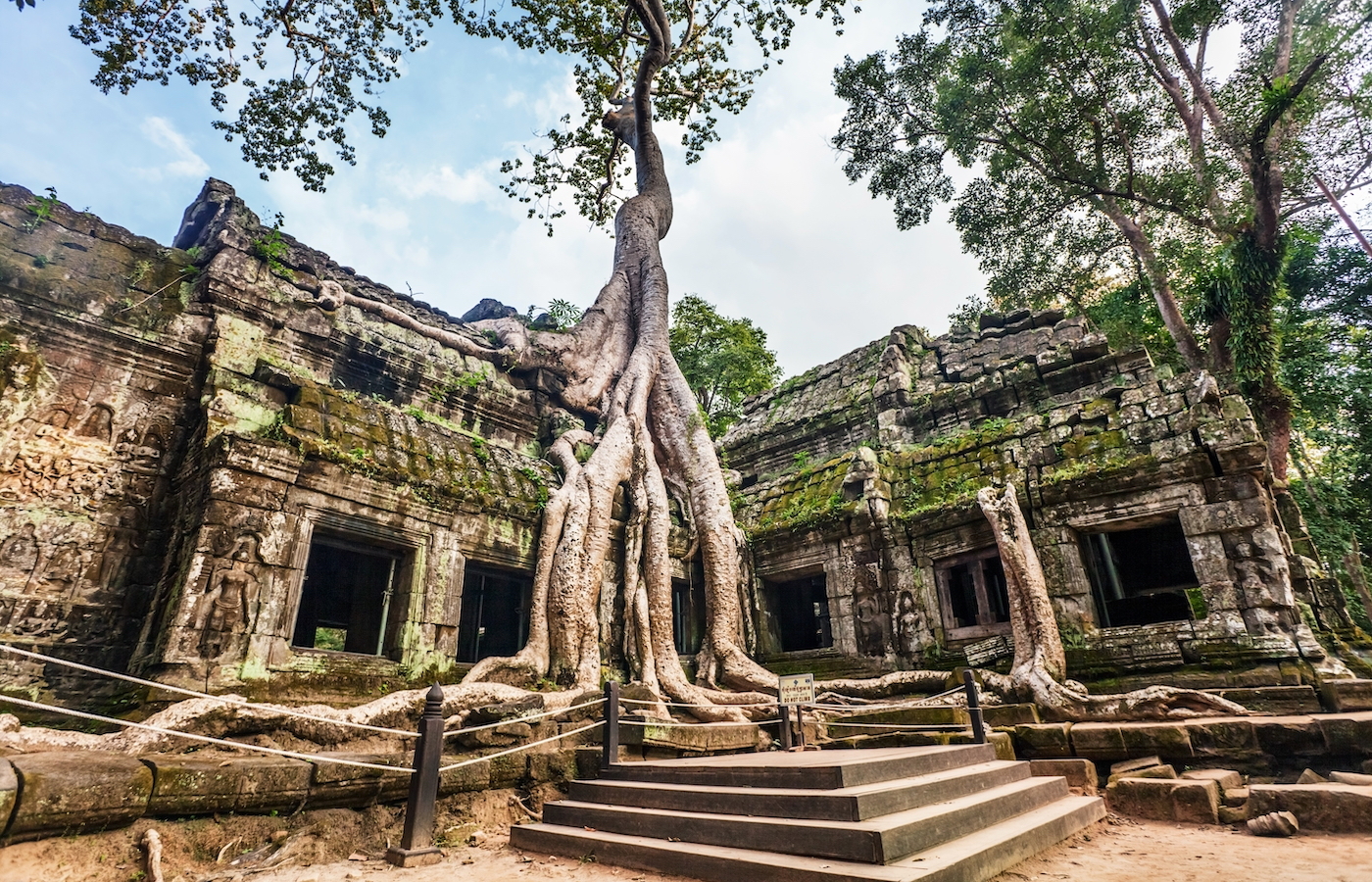 A tree grows around Ta Prohm Temple in Angkor, Cambodia.

The sprawling temple complex of Angkor Wat, in northern Cambodia, was built in the first half of the 12th century by King Suryavarman II of the Khmer Empire. It’s one of the most cherished and remarkable archeological sites in Southeast Asia, and the largest religious structure in the world, home to at least 1,000 buildings and covering some 400km².

Parts of Angkor Wat that are still standing today were first built almost a millennium ago. In the intervening years, the buildings and the landscapes in which they exist have become intertwined, with trees and plants growing through, over and around man-made structures. Given its scale, the sprawling site is still used for a diverse range of purposes, from religious ceremonies to rice cultivation. 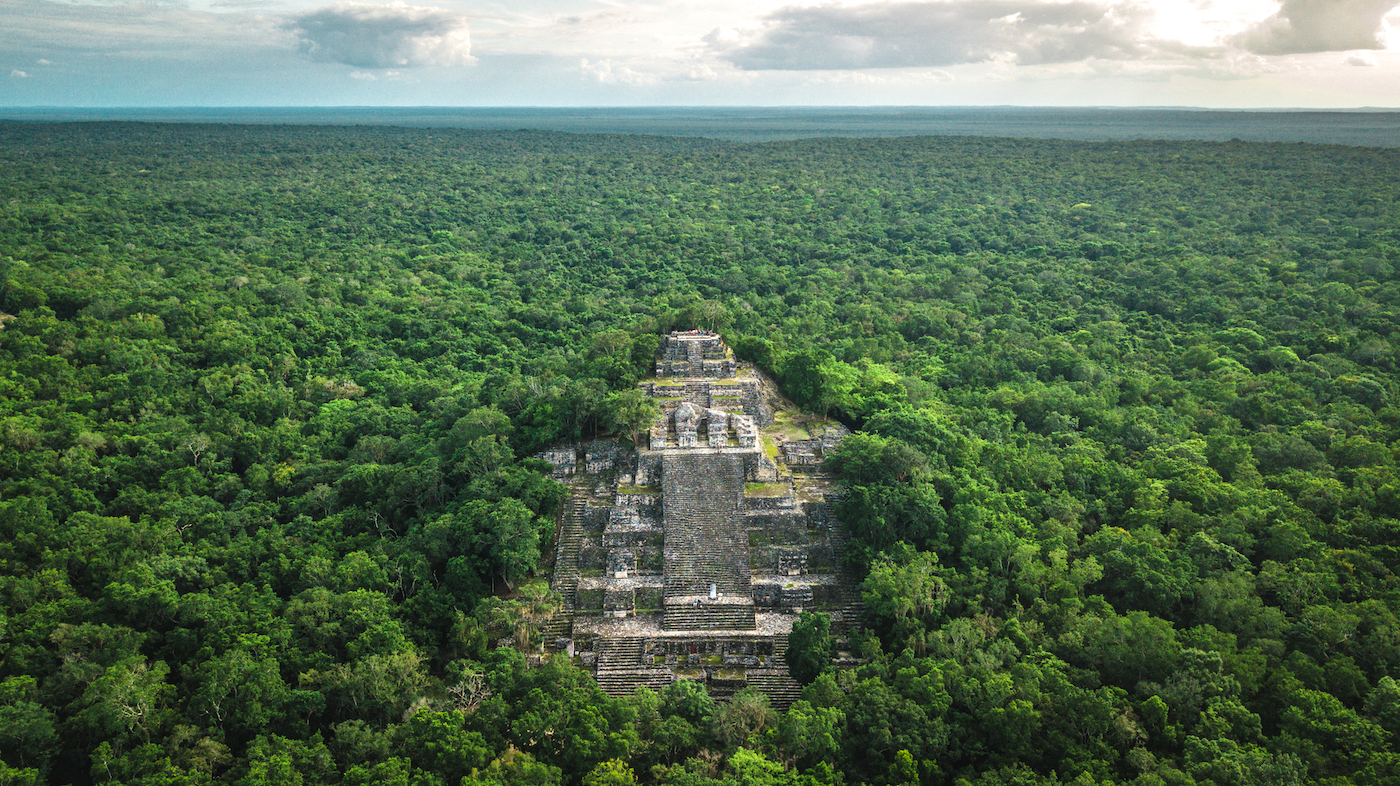 Aerial view of ruins of the Maya city of Calakmul, surrounded by the jungle.

Calakmul, in southern Mexico’s Yucatán Peninsula, is a former Maya city thought to have thrived between the 5th and 8th centuries AD. Its inhabitants are known to have battled with the Maya city of Tikal, in present-day Guatemala. After the decline of the Maya civilisation, this remote jungle settlement was overtaken by the surrounding wildlife.

Despite its age, portions of Calakmul remain well preserved to this day. The site is home to more than 6,000 structures, for example, including the settlement’s towering stone pyramid, which when viewed from above can be seen peeking through the dense tree cover. Calakmul, which translates to ‘The Place of Adjacent Mounds’, was declared a UNESCO World Heritage Site in 2002. 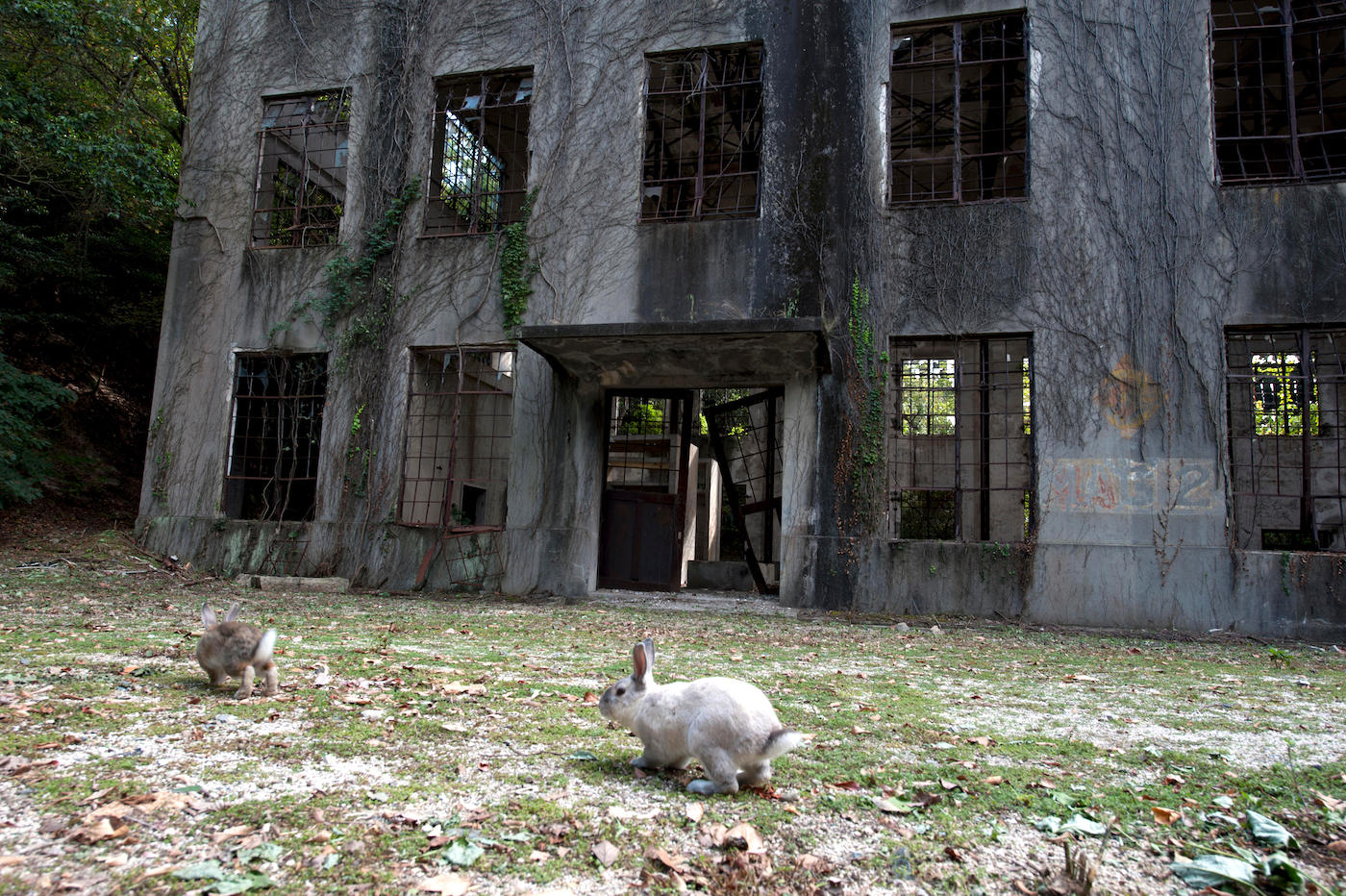 Okunoshima island in Hiroshima Prefecture, Japan. It was used for the production of the Japanese Imperial Army’s mustard gas weapons in the 1930s and ’40s. It’s now known as Usagi Jima (‘Rabbit Island’) because of the wild rabbits that roam the island today.

Today, the island of Okunoshima in Japan’s Seto Inland Sea is better known as Usagi Jima, or ‘Rabbit Island’. Bizarrely, the small isle is home to hundreds of wild rabbits who populate its overgrown buildings. It’s not known how the first rabbits got there – one theory suggests a group of visiting schoolchildren released them in the early 1970s – but the furry inhabitants have made Usagi Jima a tourist hotspot in recent years.

But Usagi Jima wasn’t always such an adorable place. During World War Two, the Japanese Imperial Army used the island as a manufacturing centre for the production of mustard gas and other poisonous weapons. The facility was kept top secret, so much so that the island was eradicated from official Japanese maps of the Seto Inland Sea. 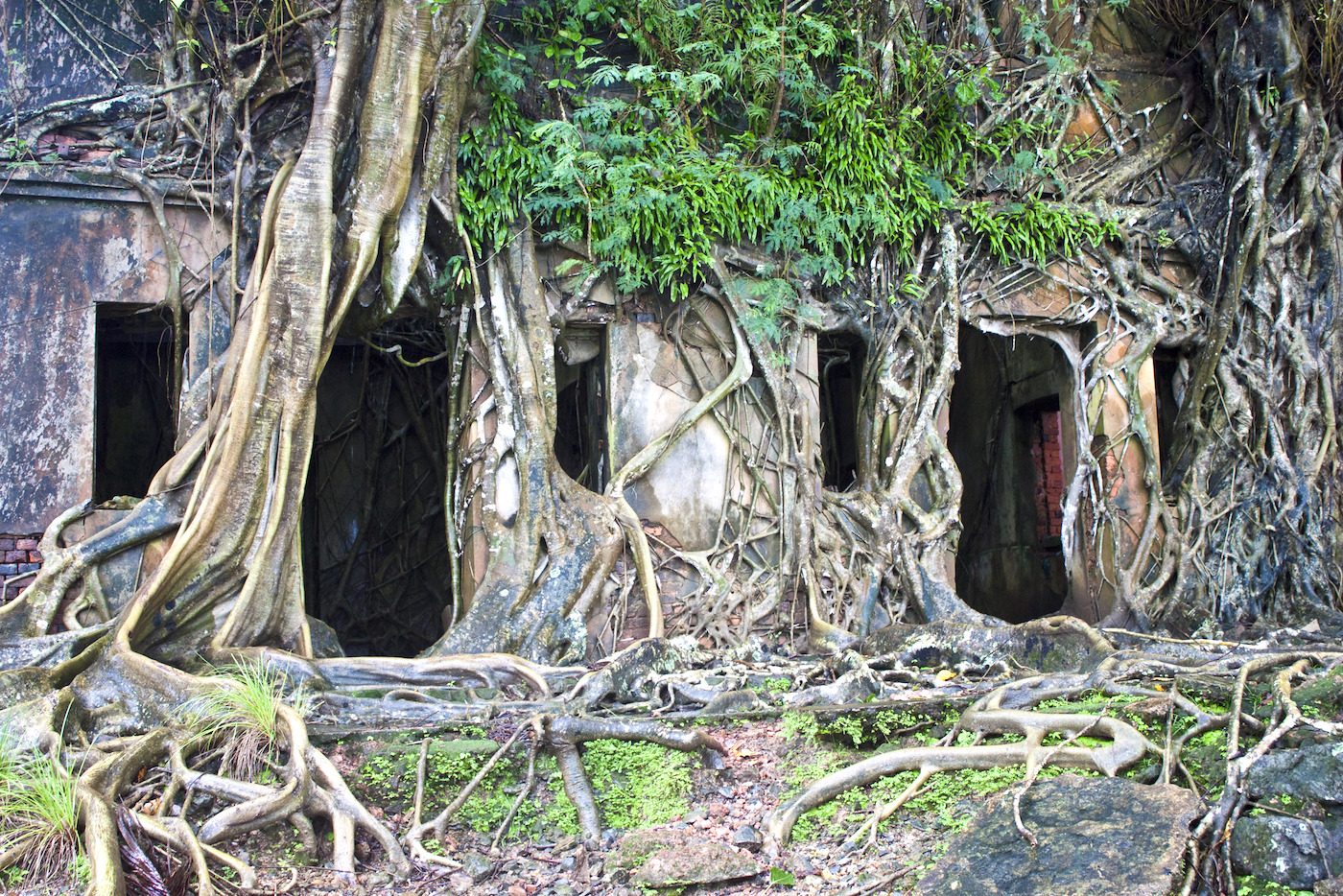 While India was under British colonial rule, Ross Island in the Indian Ocean was used as a British penal colony. There, thousands of people were imprisoned in what were, by all accounts, gruelling conditions. In 1858, after the Indian Mutiny, for example, many of those arrested for rebelling against British rule were sent to the newly established penal colony on Ross Island.

But Ross Island was not exclusively home to a prison: prisoners were forced to regularly strip the island’s thick forests so that its colonial overseers could live in relative luxury on the island. The British abandoned Ross Island during World War Two, fearing the approach of Japanese forces. The prison was then permanently closed shortly after the war ended, and without the prisoners there clearing the greenery, the island was consumed by the forest once again.