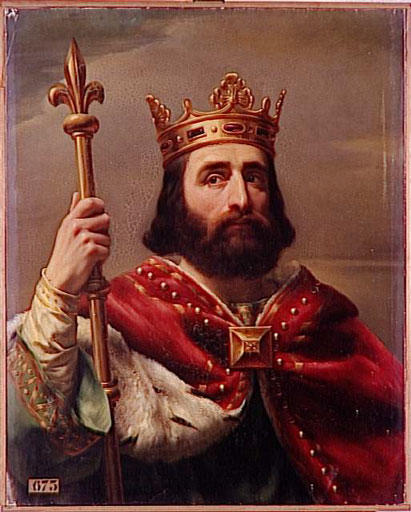 On October 22 741 Frankish leader Charles Martel died. Considered by many historians to be both the saviour and one of the founders of modern Europe, Charles was a formidable warrior and statesmen who thoroughly deserved his nickname of “the hammer.”

Martel was born in 686  in Frankia – one of the Christian kingdoms which would rise out of the ashes of the Roman Empire – and the predecessor state of modern France and Germany.  Charles’ father, Pepin of Herstal, was Mayor of the palace, a title which had come to mean de facto leader of the Frankish state. Like in modern Britain, the monarch held little power, and the authority of kingship rested in the hands of the mayor.

Thus, Charles was born into the centre of power in one of the strongest kingdoms of Early Middle Age Europe. This strange political set-up had begun with an earlier King, Sigebert III, who had trusted Martel’s ancestor Grimoald with too much power, which the mayors had subsequently been disinclined to relinquish.

Pepin was the first mayor bold enough to declare himself Prince of Frankia, and despite question marks later raised over his legitimacy Charles was groomed as his heir.

However, when Pepin’s new wife Plectrude appeared on the scene, she convinced Pepin to make his grandson Theudohald heir instead, and upon his father’s death Charles was ignominiously imprisoned in Cologne in order to get him out of the way.

Despite being unified under Pepin Frankia had been divided into two parts; the north-eastern kingdom of Austrasia and the more southerly land of Neustria. Cologne was in Austrasia, whose nobles were highly sympathetic to Charles’ cause, and after sensationally escaping from prison he met with them and was proclaimed mayor of Austrasia.

In Neustria, however, a rival called Ragenfrid had himself declared mayor by his tame King Chilperic II – and marched to meet Charles in Austrasia. Charles allowed Ragenfrid’s army to besiege and take Cologne, before feigning a retreat and smashing their complacent forces at the battle of Amblève when they were least expecting it.

Charles had trained his Austrasians himself and their discipline, combined with the tactic of the feigned retreat and ambush, was revolutionary in Europe at this time – and would be repeated with great success by William the Conqueror at Hastings. Charles never lost a battle in his entire military career after this brilliant start.

Over 717 and 718 Charles marched against Neustria and eventually regained his position as the mayor of Frankia. Afterwards he finally turned on Plectrude and Theudohald and captured them. Unusually for the times, he was merciful to the pair, who were allowed to live out the rest of their lives in comfort.

The advance of Islam

With his kingdom secured, Charles – who was now known as Martel (the hammer) – turned his genius to foreign affairs. Firstly he secured his borders in modern-day Holland, before repelling Saxon invasions and conquering what is now southern Germany.

Martel’s power was now so secure that he appointed Frankish Kings by decree, and by the end of his reign he had decided that no King was actually needed – and the appointments ceased. However, Martel’s greatest struggle was yet to begin.

In Europe Frankia’s power was both expanding and respectable – but compared to the advance of Islam in the last century it was risible. Since the death of Muhammed in 632 this new religion had spread from India to the south of France, and by the 720s was directly menacing Martel and his kingdom.

To the south of Frankia was the semi-independent duchy of Aquitaine, and in 732 it was invaded and crushed by an marauding Islamic army commanded by Abd al-Rahman al-Gafiqi. Eudes, Duke of Aquitaine, fled north to request assistance from Martel, who gathered and trained an army before meeting Al-Rahman’s larger force at Tours in modern-day France. Here Martel won an astonishing victory of seismic historical importance and Al-Rahman was killed.

The Muslim advance into northern Europe was halted forever and Christendom was saved. This battle was not the end of Martel’s campaigns, however. More Arab invasions followed, the most serious being a fleet of ships commanded by Al-Rahman’s son landing in the south of modern France in 736.

Martel was once again equal to the task of crushing these invaders however, and not only defeating the invading army, he also managed to reconquer important cities – such as Arles and Avignon – from Islamic rule.

Winning battle after battle with a winning combination of heavy cavalry – arguably the first western “knights” – and a phalanx of veteran infantry, Martel’s army defeated the Arabs again and again until their final destruction at the battle of the river Berre in 737. His job almost complete, he could now turn his mind back to domestic matters.

As Charles was finishing off the Muslim armies in 737 his King, Theuderic or Thierry IV died. Bored of this charade, Martel did not bother to crown another and ruled as a “dux” or Lord of War until his death.

The end of the Hammer

The last few years of Charles’ life were more peaceful as he pondered his legacy and who would rule in his stead. Dividing his vast realms between his sons in 740, Martel enjoyed one more quiet year of life before dying peacefully on the 22nd October 741.

Though he comes from a little-known age, few men could claim to have influenced history more. By throwing back Islam and creating a strong Frankish Empire Martel did more than any other man to drag Europe into a new age of dominance.

His revolutionary heavy-cavalry tactics would define warfare for hundreds of years to come as knights lead thunderous charges across Europe and beyond, and the dynasty he founded – for his sons would rule as Kings, included Charlemagne – a man who would complete what the Hammer had started.