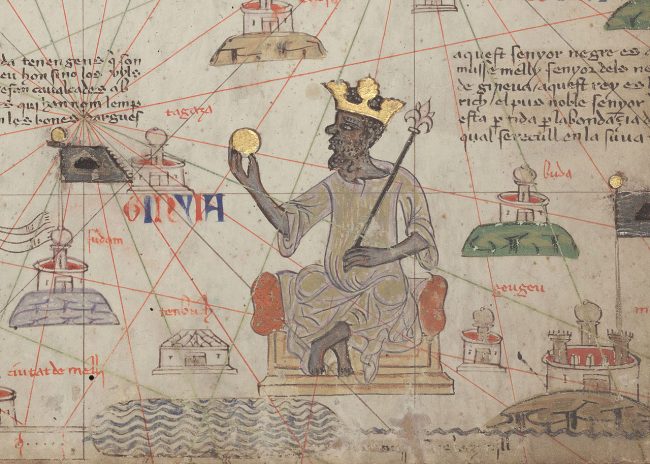 Musa I of Mali, more famously known as Mansa Musa, was the richest man of the Middle Ages and, perhaps, of all history.

He ruled at a time when powerful, immensely wealthy monarchies dominated the world. Yet legendary tales of Musa’s wealth trumped all others.

Musa used his great wealth to fund several impressive feats during his reign: military, economic, cultural and religious. His reign had a significant impact on the history of northwest Africa – traces of which remain visible today.

1. Musa did not have a strong claim to ruling the Mali Empire…

His grandfather had been the brother of Sundiata Keita, the founder of the Mali Empire. But neither Musa’s grandfather, nor his father ever acquired the kingship.

2. …but extraordinary events ensured he ended up as ruler

According to the Arab-Egyptian scholar Al-Umari, Mansa Abubakari Keita II left Musa to act as regent of the kingdom while he embarked on an expedition to explore the limits of the Atlantic Ocean.

Yet Abubakari never returned from this expedition and, according to the laws of the land, Musa succeeded him as ruler of the Mali Empire.

The nucleus of the Mali Empire’s great wealth was its access to a significant surplus of gold sources at a time when the resource was in high demand.

Indeed, some suggest Mali may have been the largest producer of gold in the world at that time. Consequently Musa’s coffers swelled.

During Musa’s 25-year-rule the Mali Empire more than tripled in size and had significant influence in several modern day countries including Mauritania, Senegal, Nigeria, Burkino Faso and Chad.

Musa conquered more than 20 major cities in his lifetime. This included the prestigious Songhai capital of Gao on the Niger river, one of the oldest trading centres in western Africa.

5. Musa made a famous pilgrimage to Mecca

Between 1324 and 1325, Musa began the long journey from Mali to Mecca to visit the holy site. He made sure to arrive in spectacular style, organising the most impressive caravan in human history to accompany him: 60,000 men and 80 camels according to eyewitnesses.

The logistic challenges for sustaining this mighty company must have been significant; yet Musa used his great wealth to provide for his party.

Musa was also sure to recruit Muslim teachers and leaders during his journey, so that they might accompany him home and spread the teachings of the Quran further in his own kingdom.

6. He was particularly generous to Cairo

As they were making their way towards Mecca, Musa and his caravan travelled through Cairo where the Egyptian Sultan, An Nasir, persistently requested that Musa pay him a visit. Although Musa initially refused the requests, he eventually relented.

The meeting proved highly-productive: the two sultans established good diplomatic relations from the meeting and a trade agreement was struck between the Kingdoms of Egypt and Mali. In return Mansa Musa spent a significant sum of gold in the Egyptian capital to show his gratitude.

This, inadvertently, caused great problems however: Musa spent so much gold that the resource’s value decreased and remained relatively low for many years, causing Cairo’s economy to crash.

Musa’s extravagant spending caused severe inflation not just in Cairo, but also in Medina and Mecca.

7. He transformed Timbuktu into the epicentre of his empire…

Recognising its potential for power and prosperity, Musa relocated his court to the city after absorbing it into the Mali Empire in c.1327.

With Musa’s backing, the city soon transformed from an insignificant settlement into one of the most prestigious cities in the world – a thriving centre of trade, scholarship and religion.

8. …and also turned it into the greatest centre of learning in Africa

One of Mansa Musa’s greatest acts that helped turn Timbuktu into a wealthy, famous metropolis was his construction of the Djinguereber Mosque. The Mosque soon became a famous learning centre that both attracted scholars from across the Muslim World and became home to over a million manuscripts.

Its construction helped Musa transform Timbuktu into a centre of learning that could rival Alexandria in antiquity.

In the Catalan Atlas, one of the most important maps of the medieval period and created some fifty years after Mansa Musa ruled, Musa is depicted in the map section showing sub-Sahara, sitting on a throne, wearing a diadem and holding aloft a gold coin – a symbol of his great wealth.

10. There is debate as to when Musa died

Some suggest he died in c.1330, not long after his return from Mecca. Yet others believe he died no earlier than 1337 as a near-contemporary Islamic historian Ibn Khaldun states he was still involved in diplomatic affairs that year.