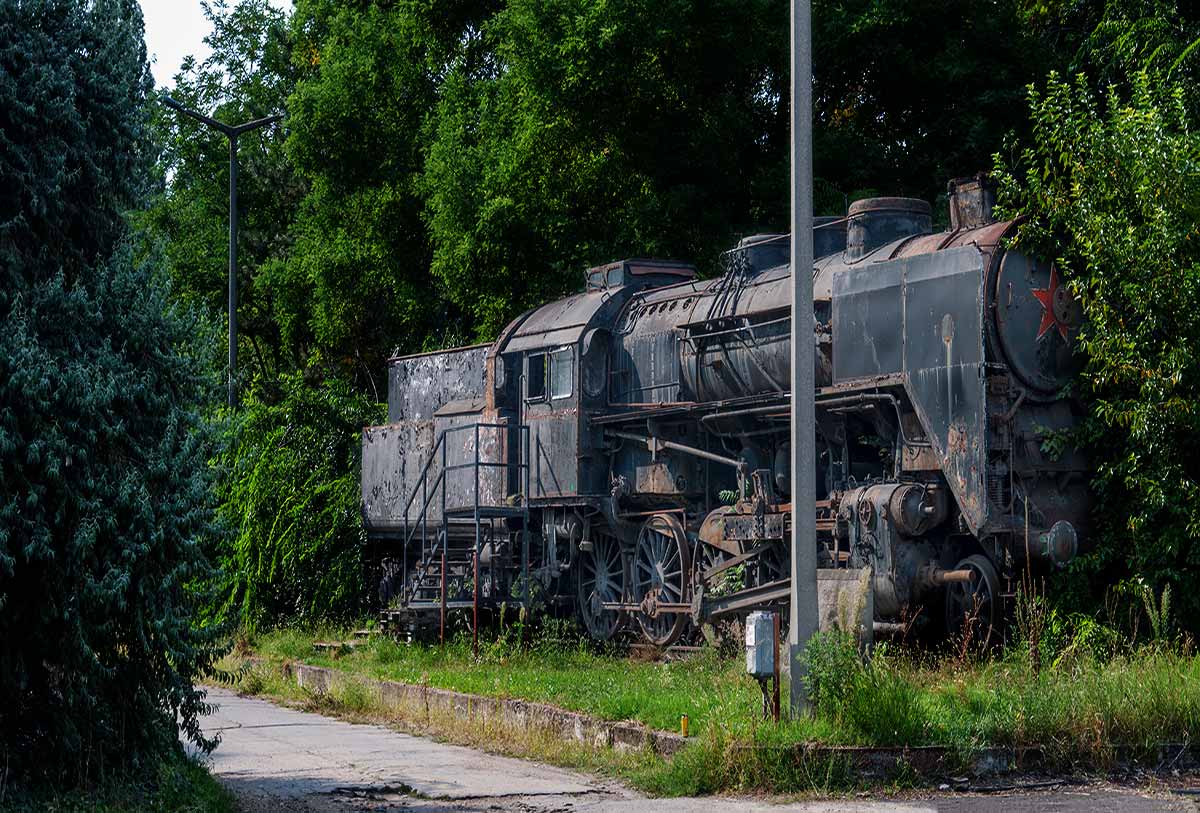 The steam train was one of the most important inventions of the Industrial Revolution, revolutionising the transportation of people and goods around the globe. To this day, trains continue to play a key part in the world’s transport networks.

But what happens to trains after they become obsolete? Well, some of them are sent to train graveyards, where rows of the industrial relics are left to rust and rot.

Here’s a collection of eerily fascinating train cemeteries around the world. 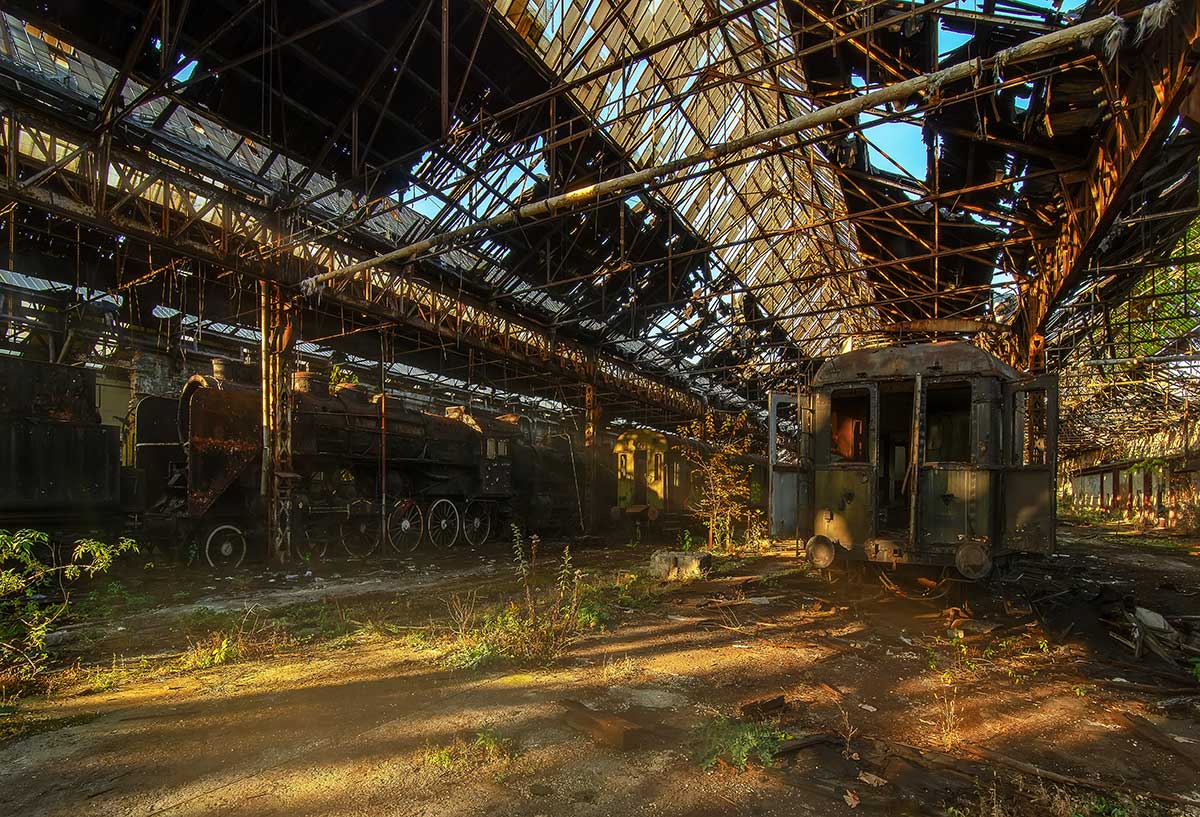 On the outskirts of Budapest sits the Istvántelek Train Yard, which is home to over 100 abandoned locomotives and trains and is sometimes referred to as the ‘Red Star Train Graveyard’. This name comes from a few Hungarian MAV 424 steam engines that have the Red Star on their fronts.

The graveyard is home to a wide variety of trains from different eras, ranging from pre-World War One Austria-Hungarian steam trains to more modern examples used during the Communist period. Moreover, some of the site’s trains are said to have a darker history behind them as they were allegedly used to transport hundreds of thousands of Jewish prisoners to Auschwitz during World War Two.

The Istvántelek Train Yard is no longer open to the public – papers are required to access it legally – as it’s in a fenced-off industrial area. 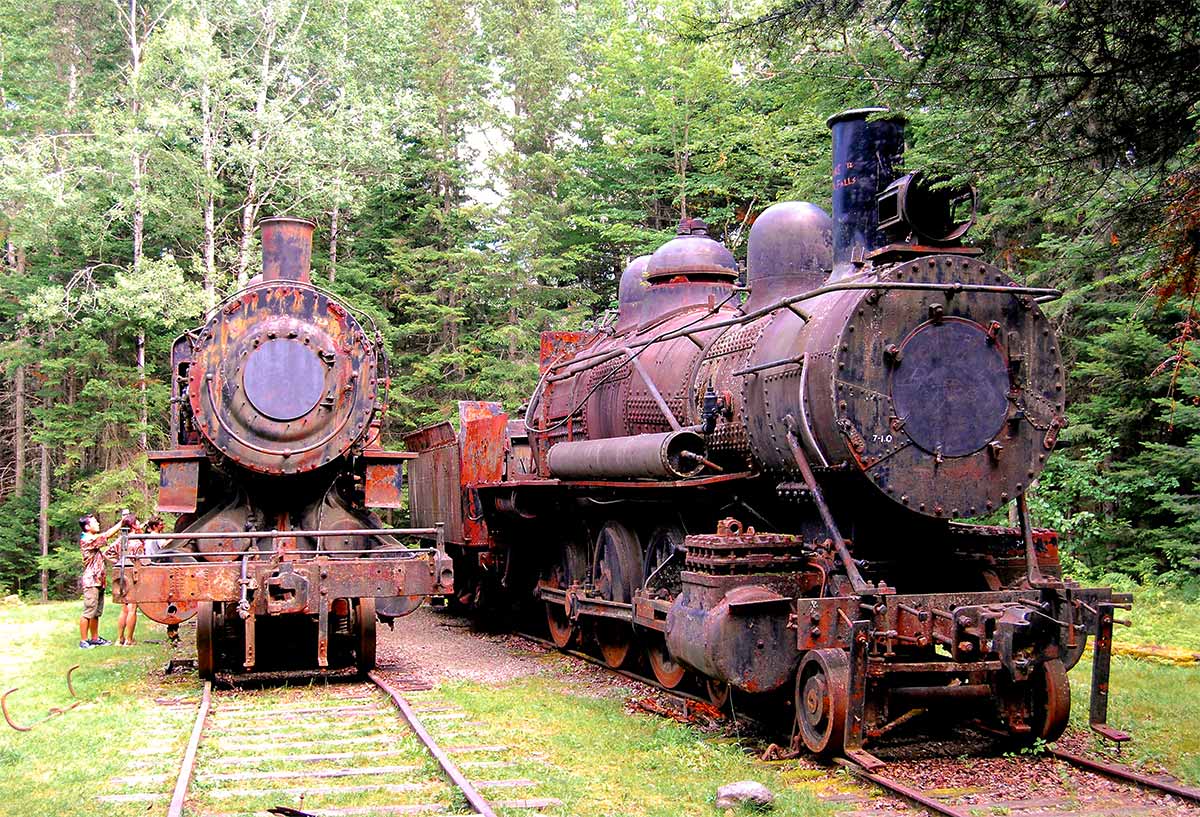 Hikers exploring near Eagle Lake in Northern Maine can find two massive early 20th-century locomotives stranded in the smallest train graveyard on this list. They stand as stark reminders of the region’s industrial heritage.

The trainline was used to transport wood between drainage basins in the Maine North Woods. The two locomotives were in operation only for a couple of years before the timber operation was shut down. With decreasing demand for paper caused by the Great Depression, the need for pulpwood plummeted. Once work was resumed following World War Two, road transportation became more cost-efficient, leading to some of the line’s trains being abandoned. 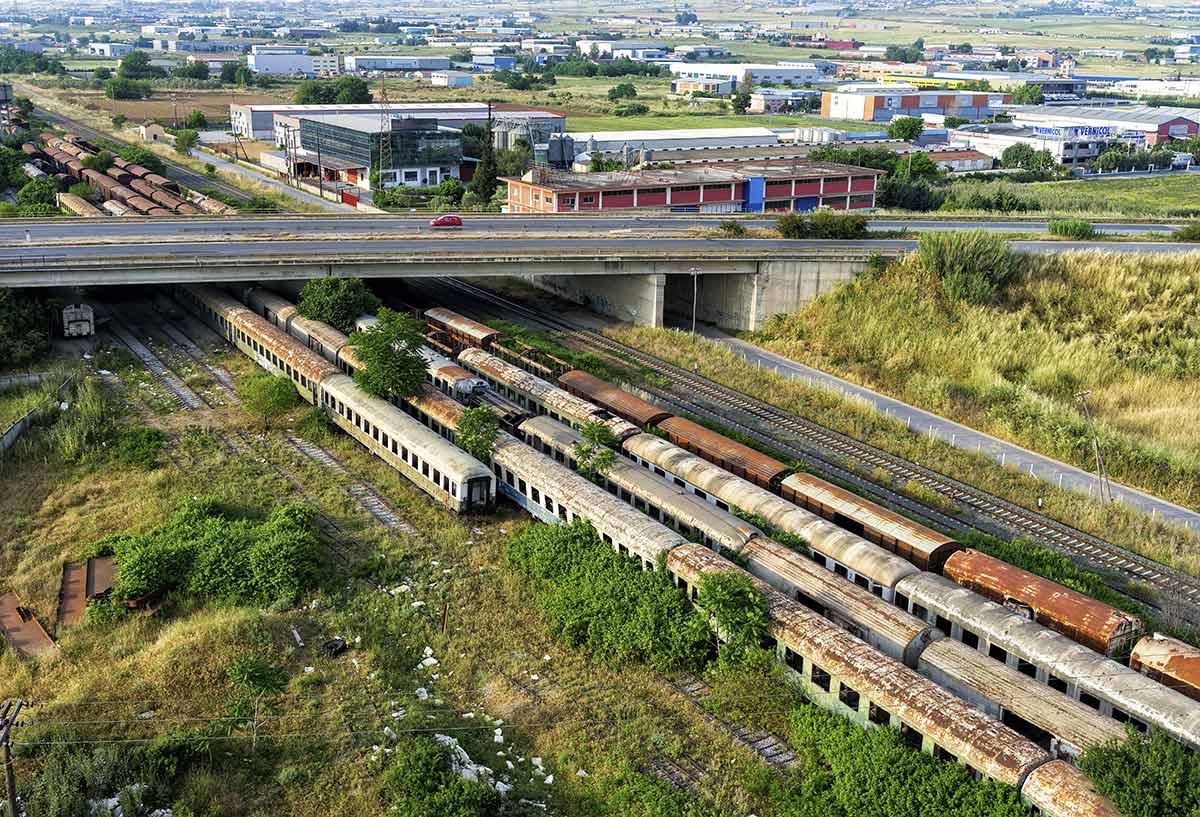 Aerial view of the train cemetery on the edge of Thessaloniki

Since the 1980s, thousands of train cars have been stranded near Greece’s second-largest city, Thessaloniki. The Hellenic Railways Organisation has been trying to sell them as scrap metal, but still the landscape is littered with dozens of rusty, vandalised train cars. The graveyard has apparently become a spot for shady business dealings and scrap smuggling, which has made it more difficult to sell the train cars off.

With each passing year, the graveyard is slowly being taken over by plant life, blurring the line between where the landscape ends and these industrial relics begin. 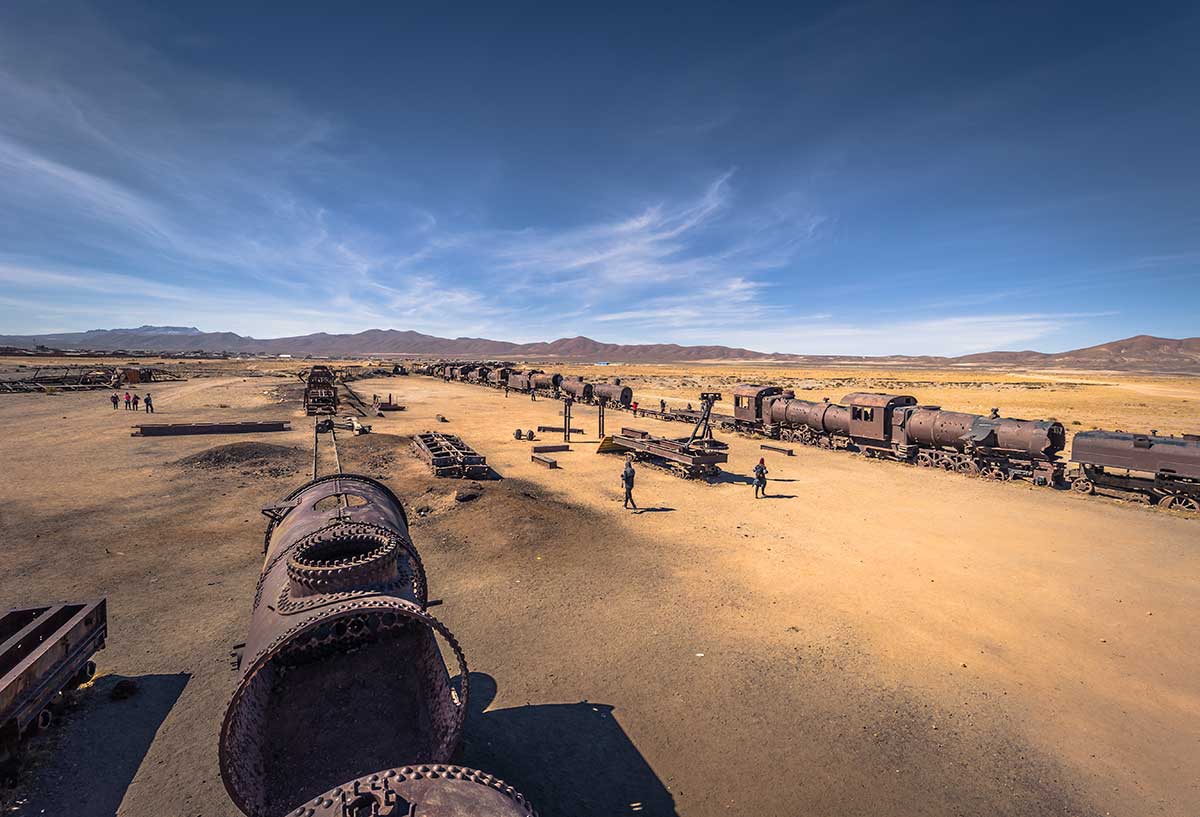 The Great Train Graveyard on the outskirts of Uyuni, Bolivia. 20 July 2017

The Bolivian town of Uyuni was an important transportation hub in South America during the 19th century. Because of its location, the town was a convenient crossing point between Chile, Argentina and Bolivia. Uyuni prospered as a mining town, but after World War Two, the mining industry collapsed and the trains that used to carry the raw materials were left stranded in the salt flats 3000km above sea level.

Nowadays, the Great Train Graveyard, as it is known, has become a popular tourist attraction and visitors can find a large collection of early 20th-century trains there. The place has an almost dystopian feel to it, and the trains appear as if they might collapse any minute, weakened by a hundred years of human interference and the forces of nature wearing them down. 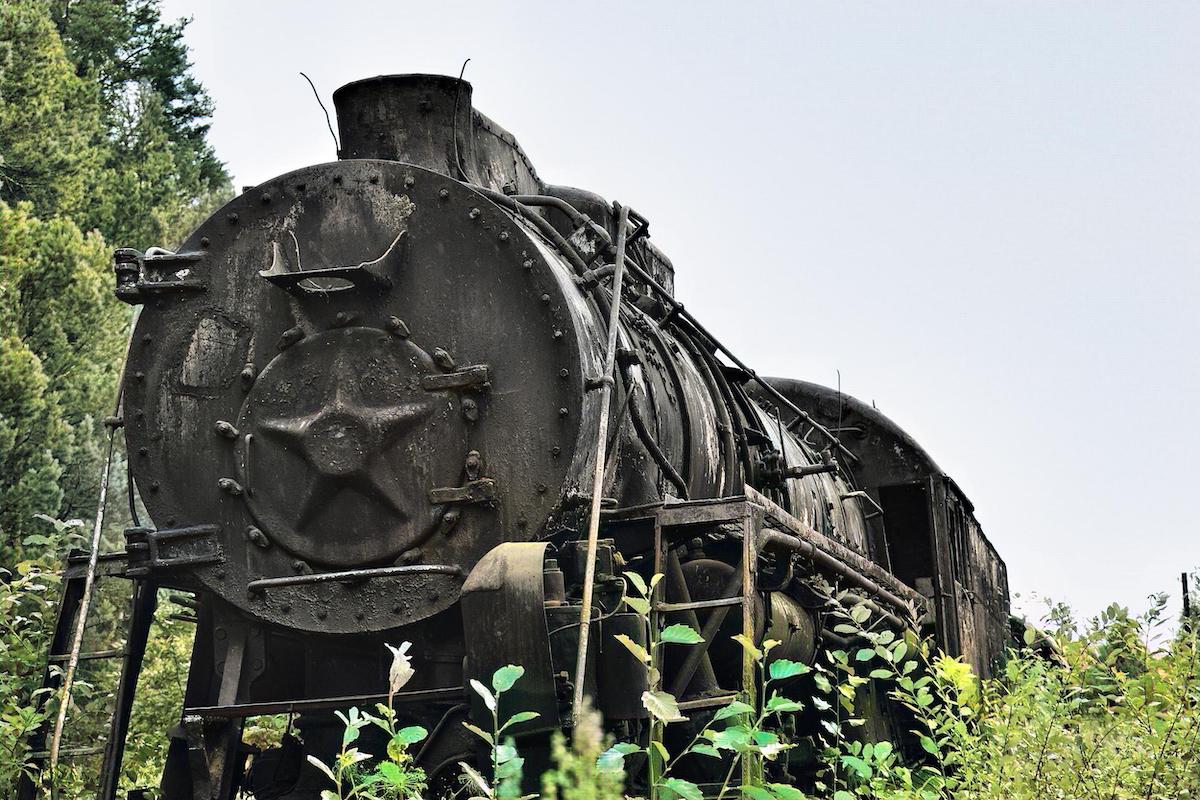 Locomotive Lebedinsky or ‘victory’. It is located in the ‘cemetery of steam locomotives’, Russia.

In the shadow of the Ural mountains, close to the city of Shumkovo, explorers can find a curious railway cemetery. It is a collection of 20th-century Soviet trains that were brought here to rot away. During the Cold War, the location also served an alternative purpose: it was meant to be used as a backup railway base in the case of nuclear war.

In recent years, most of the trains have been bought up by Chinese companies or restored and used as exhibits in museums, though there are still some left in this fascinating time capsule.