There are numerous Roman ruins in Britain, from the fascinating Lullingstone Roman Villa to the world famous Hadrian’s Wall, Durnovaria and Verulamium. Other popular archaeological sites which are open to the public tend to include Cirencester Amphitheatre, Chedworth Villa and North Leigh Villa.

From the moment they invaded in 43AD through to their eventual withdrawal around 410AD, the Romans stamped their authority on Britain through military fortifications, cities, civic buildings and great monuments. This archaeological legacy can still be explored across the United Kingdom.

Our guide to the Roman sites of the UK can help you discover all of these places and more. Simply explore the interactive map of Roman remains in Britain above or take a look at what’s on offer below.

What are the best Roman Sites in the UK? 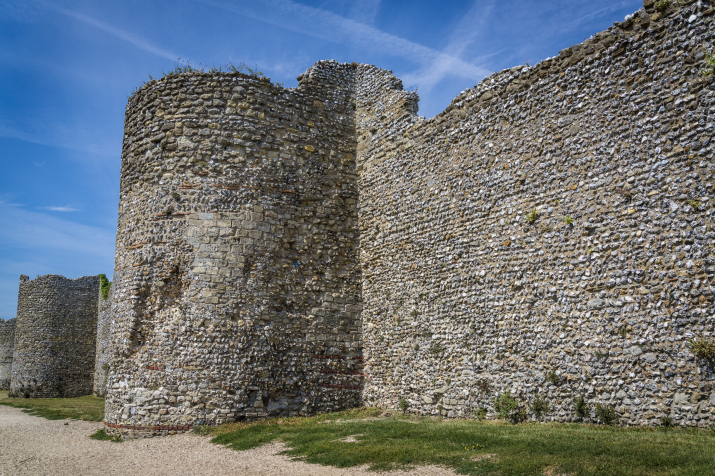 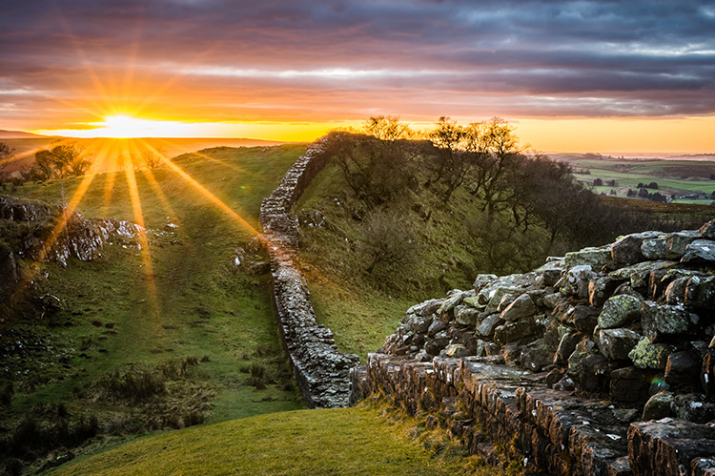 Hadrian’s Wall was a vast defensive structure spanning 73 miles and built under the rule of Roman Emperor Hadrian between 122 and 130 AD. Actually made up of a number of sites, Hadrian’s Wall is probably the most famous of the UK’s Roman sites. Today, many areas can be explored, giving an insight into this 73-mile ancient fortification. Large sections of Hadrian’s Wall remain intact in northern England and these are surrounded by various Roman monuments, forts and other ruins. There are several ways to visit all of these sections and sites, notably as part of the National Trail, which is a signposted walk, by bus, by bicycle and via tour groups. The 15 metre section pictured above is known as Planetrees and is quite central along the trail.

The Roman baths of Bath contain the remains of this ancient bath house as well as other artefacts, finds and displays from the ancient Roman town of Aqua Sulis.  The baths were built around 44 AD – vast and lavish, the baths were able to accommodate far more people than just the residents of this town and were intended as a place for people to visit from across the Empire. Today, the baths offer an incredibly comprehensive insight into the lives of the ancient Romans in the town and around Britain. The site looks quite small from the outside, but it is actually vast and a visit can last several hours. There is also a comprehensive museum dedicated to exploring the lives of the ancient Roman citizens of Bath and an ancient drain used as an overflow system. 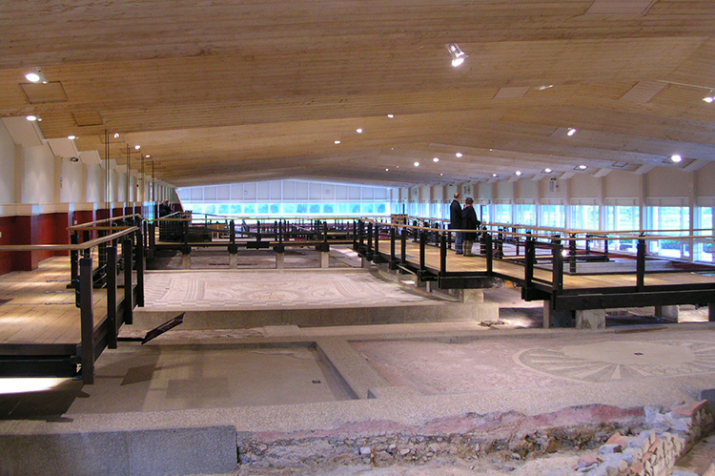 Containing the remains of a huge Roman palace complex, Fishbourne contains not only ruins, but interactive displays and reconstructions. Built on the site of a Roman supply compound, Fishbourne was a vast and impressive development which would have been built for the very highest echelons of Romano-British society. Today, the palace is run by the charity Sussex Past and is open to tourists and educational groups. There are many extremely well-preserved mosaics including the famous Dolphin mosaic. Visitors can view audio-visual displays, artefacts and reconstructions of the site as well as viewing the remains of the North Wing, which are protected under a covered enclosure.

Bignor has some of the most amazing Roman mosaics in the UK as well as practical, hands on activities for kids. The villa site was developed over two centuries before it was abandoned, probably after the Roman withdrawal from Britain. Re-discovered in the early 19th century, it is now enclosed in Georgian buildings which are themselves worthy of note. Today, the site contains some of the best preserved Roman mosaics in Britain, as well as the remains of the villa complex which include several living rooms, a bathhouse and even the underfloor heating systems employed by Roman engineers.

Perhaps London’s most famous 20th century Roman discovery, the Temple of Mithras is a Roman mithraeum – a temple built by worshippers of the mysterious cult-like god Mithras – built in the late second century and discovered in 1954 during building work in Walbrook, a street in the City of London. Today media behemoth Bloomberg who own the site have brought the temple back to life by way of ‘an innovative museum experience that will change the way we encounter archaeology.’ The resultant experience is both fascinating and superbly presented and definitely one to visit.

Home to the notable ruins of a 1st century Roman legionary barracks, Caerleon offers a fascinating insight into life at a Roman fort on the edge of the Empire. Among other things it contains the remains of a 6,000-seater amphitheatre. Other highlights are its grand bathhouse and the L-shaped barracks themselves. The nearby National Roman Legion Museum contains a number of fascinating exhibits detailing finds and artefacts from the site.

One of the best known forts along Hadrian’s Wall, Vindolanda contains an array of interesting Roman ruins as well as an excellent museum. The structures at Vindolanda range from a pre-Hadriatic baths complex to post-Roman mausoleum and church, demonstration of the lengthy period for which the site has been occupied. Amongst other sites found at Vindolanda are military offices and barracks dating to the Severan period and numerous sites from the third and fourth centuries including houses, workshops, a Praetorium, a temple and more baths. For those wanting to see what else has been found at the excavations, the Vindolanda museum offers an array of artefacts including one of the country’s biggest ancient leather collections.

Located today in modern St Albans, Verulamium was one of the most important Roman cities in Britain. Formerly the tribal capital of the native Catuvellauni tribe, Verulamium was conquered by the Romans during their invasion of the island in 43 AD. Visitors can still see the remains of the Roman walls, as well as the impressive Roman theatre – one of the few Roman theatres in Britain to have survived. As well as the site itself, Verulamium Museum stands on St Michael’s St, with displays of Roman everyday life. There are some impressive murals and mosaics and a variety of interactive displays.

Containing the remains of ancient granaries, houses and markets, this Roman archaeological site was once a thriving Roman settlement. Before the construction of Hadrian’s Wall, Corbridge was the site of several forts but once the wall was complete, Corbridge began developing into a town. Today, visitors can explore the roads and remains of the town which include some well-preserved granaries, houses, workshops and markets.

The Best Roman Ruins in Spain