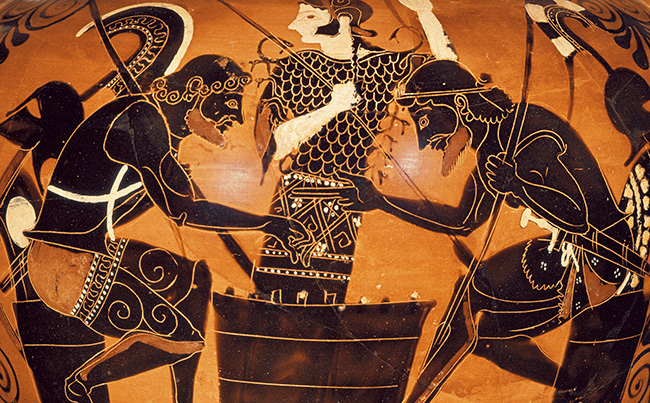 Homer’s Iliad is one of the greatest literary epics in history. Believed to have been written in the 8th century BC in Asia Minor, the poem is set during the final year of the Trojan War and consists of 24 books.

Despite its short time frame, it includes some of the siege’s most famous stories: from Achilles’ duel with Hector to Achilles and Agamemnon’s dispute over Briseis.

At the poem’s heart are the heroes. Often depicted as semi-mythological, extraordinary warriors, their stories often intertwine with various gods and goddesses.

Here are 15 heroes from Homer’s Iliad.

Eldest son of King Priam and Queen Hecuba; husband of Andromache; father of Astyanax. Depicted as the most virtuous of all the heroes.

Hector served as the commander in chief of the Trojan forces; he was the city’s best fighter. He battled Ajax the Greater on several occasions, but his most famous duel was with Achilles.

Hector had killed Patroclus, Achilles’ close companion who had donned the warrior’s iconic armour. He accepted the challenge to duel an enraged Achilles, despite the best efforts of Andromache to convince him otherwise.

Defeated and killed in the duel. For the next 12 days his body was maltreated at Achilles’ hands before the Myrmidon finally relented and returned the body to a grieving Priam. 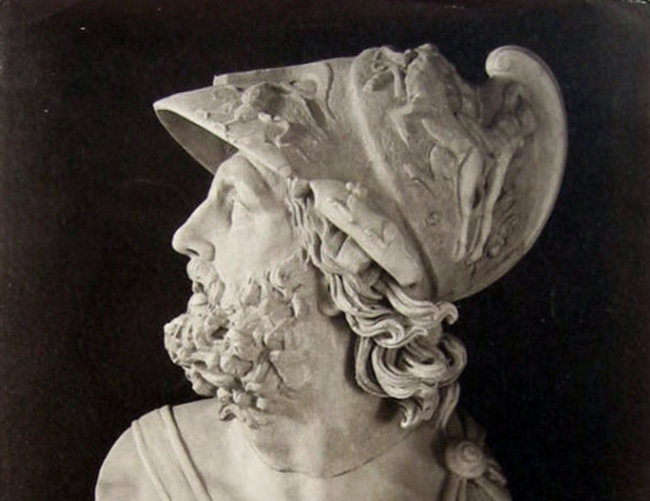 King of Sparta; brother of Agamemnon; husband of Helen.

When Helen absconded with Paris, Menelaus sought aid from his brother, who accepted and triggered the famous Trojan War.

During the War Menelaus challenged Paris to a dual, which he duly won. Convincingly. Before he could land the killing blow, however, Paris was saved by Aphrodite.

Killed Deiphobus, the brother of Paris, at the end of the Siege; reunited with Helen. Together they returned to Sparta, after a long voyage by way of Egypt.

Brother of Menelaus; king of Mycenae and the most powerful monarch on mainland Greece.

Infamously sacrificed his daughter Iphigineia to the goddess Artemis so that his ships could set sail for Troy.

This ultimately came back to haunt him. When Agamemnon returned victorious from the Trojan War, he was murdered in his bath by Clytemnestra, his vengeful wife.

During the Trojan War, one of Agamemnon’s most famous episodes in the Iliad is his conflict with Achilles over Briseis, a captured ‘spoil of war’. Ultimately, Agamemnon was forced to return Briseis.

Prominent Greek commander in Homer’s Iliad from Locris. Not to be confused with Ajax ‘the Greater’. Commanded a fleet of 40 ships to Troy. Famous for his agility.

Infamous (in later tales) for his rape of the priestess Cassandra, the fairest of Priam’s daughters, during the Sack of Troy. Consequently killed by either Athena or Poseidon on his return home.

King of Ithaca, famous for his cleverness.

Along with Diomedes he first captured the famous horses of Rhesus and then the Palladium statue. Most famous for his innovative plan to capture Troy with the wooden horse.

At the end of the Trojan War, Odysseus angered the god Poseidon with his hubristic attitude, signalling the start of his most famous venture: The Odyssey.

Son of Priam and Hecuba; brother of Hector. His absconding to Troy with Queen Helen of Sparta triggered the Trojan War.

Depicted as an archer rather than a melee fighter in the Iliad to epitomise his contrasting persona to the noble Hector (archers were considered cowardly).

Defeated in a duel with Menelaus, but escaped thanks to Aphrodite’s intervention. Killed in the later stages of the Trojan War by Philoctetes, though not before he had killed Achilles.

King of Argos; a famous warrior who was honour bound to join the expedition of Menelaus to Troy. Brought the second-largest contingent of all the Greek commanders to Troy (80 ships).

Diomedes was one of the Greeks’ most famous warriors. He slew many important enemies, including the legendary Thracian king Rhesus. He also overwhelmed Aeneas, but was unable to land the killing blow due to divine intervention from Aphrodite. Injured two gods during the fighting: Ares and Aphrodite.

Alongside Odysseus, Diomedes was famous for his cunning and swiftness of foot. He famously aided Odysseus not only in stealing Rhesus’ horses, but also the Palladium wooden statue.

Returned to Argos after the Trojan War to discover his wife had been unfaithful. Departed Argos and travelled to southern Italy where, according to myth, he founded several cities.

Also known as Ajax ‘the Great’. Famous for his size and strength; one of the Greeks’ greatest fighters.

Ajax fought Hector in several duels of varying outcomes (including one where Hector forced Ajax to flee).

Following the fall of Achilles and the retrieval of his body, a debate ensued between the generals as to who should receive his armour. Ajax proposed himself, but the generals ultimately decided on Odysseus.

According to Sophocles’ Ajax, he became so enraged by this decision that he decided to kill all the generals in their sleep. Athena intervened however. She turned Ajax temporarily insane, making him slaughter dozens of sheep rather than the strategoi.

When Ajax realised what he had done, he committed suicide out of shame.

King of Troy; father of many children including Hector, Paris and Cassandra; husband of Hecuba; also related to Aeneas.

With divine assistance, Priam covertly arrived at Achilles’ tent in the Greek camp after the warrior had defeated Hector. Priam begged Achilles to return Hector’s body to him. The hero ultimately agreed to his request.

(Though not reported in The Iliad), Priam is killed during the sack of Troy by Neoptolemus, the infamous son of Achilles.

Rhesus was a legendary Thracian king: son of one of the nine muses, renowned for his high-quality horsemen.

A Trojan ally, Rhesus and his company arrived on Troy’s shores late during the siege, aiming to liberate Priam’s people.

After discovering the arrival of Rhesus and hearing word of his famous horses, one night Odysseus and Diomedes infiltrated Rhesus’ camp, killed the king while he slept and stole his steeds.

Rhesus was later resurrected by his mythical mother, but played no further part in the Trojan War.

The wife of Hector; mother of Astyanax.

Begged Hector not to fight Achilles outside the walls of Troy. Homer portrays Andromache as the most perfect, most virtuous wife.

After the fall of Troy, her infant child Astyanax is thrown to his death from the city walls. Andromache, meanwhile, became the concubine of Neoptolemus.

The most famous hero of them all. Son of King Peleus and Thetis, a sea nymph; father of Neoptolemus. Lead the Myrmidom contingent during the Siege of Troy, bringing with him 50 ships.

Withdrew from the Greek army with his men after a dispute with Agamemnon over Briseis, a princess who Achilles had previously captured and made his concubine.

Returned to the fighting after he heard about the death of Patroclus at Hector’s hand. Killed Hector in revenge; maltreated his corpse but eventually returned it to Priam for proper funerary rites.

Achilles was ultimately killed by Paris, shot with an arrow, though several versions of how, exactly, he died survive. 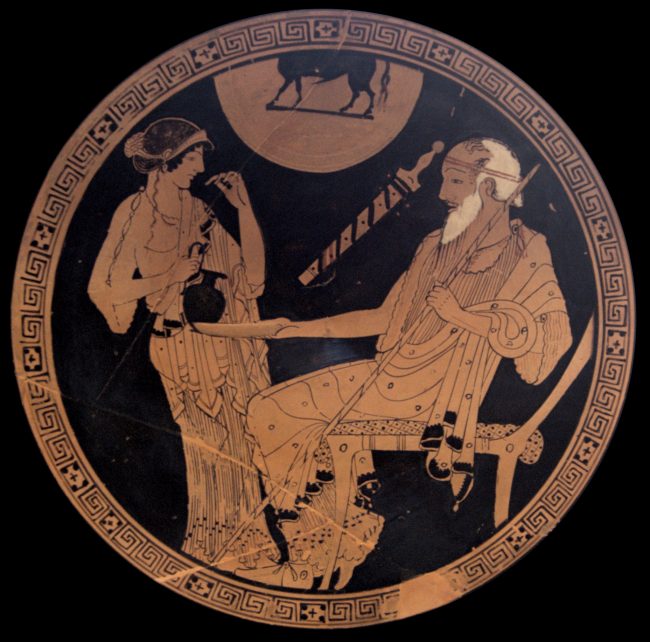 The venerable King of Pylos, famous for his wisdom. Too old to fight, but was widely-respected for his sage advice and for his tales of the past.

The son of Anchises and the goddess Aphrodite; cousin of King Priam; second cousin of Hector, Paris and Priam’s other children.

Aeneas served as one of Hector’s chief adjutants in battle against the Greeks. During one battle Diomedes bested Aeneas and was about to slay the Trojan prince. Only the divine intervention of Aphrodite saved him from certain death.

Aeneas became famous for the legendary myth about what happened to him following the fall of Troy. Immortalised in Virgil’s Aeneid, he escaped and traversed much of the Mediterranean, ultimately settling with his Trojan exiles in central Italy. There he became king of the Latins and ancestor of the Romans.