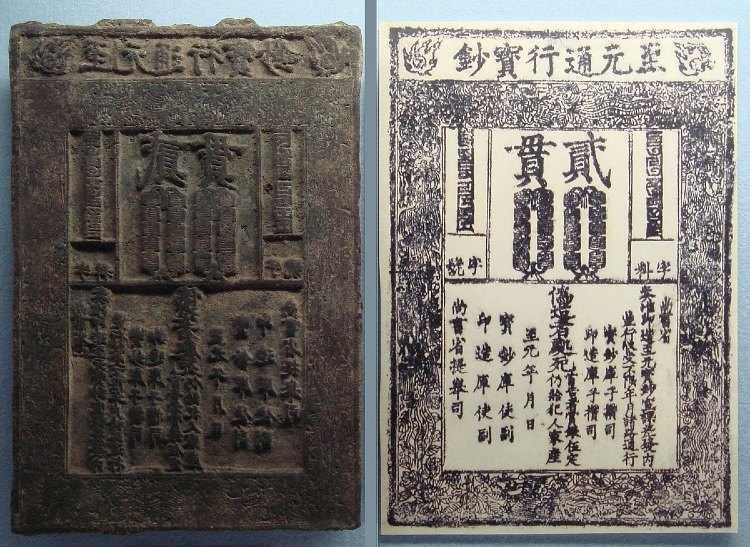 Yuan dynasty banknote with its printing wood plate 1287. The smaller Chinese characters in the bottom half of the note say "(this note) can be circulated in various provinces without expiration dates. Counterfeiters would be put to death.
Image Credit: Wikimedia Commons / Own work, photographed at Tokyo Currency Museum

From weapons of war such as gunpowder to pioneering instruments like the compass, inventions from China have altered the course of history.

Chess, the cannon, silk, the umbrella, acupuncture, porcelain, the seismometer, the kite, and even the toothbrush are all inventions that were popularised in part by the emergence of trade along the Silk Road.

China’s most famous innovations, the ‘Four Great Inventions’ – paper, gunpowder, the compass and printing – have fundamentally altered the course of human history.

Arguably one of the most defining inventions of all time, paper has existed in China as early as the year 105. The oldest surviving piece of paper in the world was discovered in a Tomb near Xian in 1957. Made of hemp fibres, it dates between 140 and 87 BC.

Chinese eunuch and Eastern Han dynasty court official Cai Lun is generally regarded to be the inventor of paper and the papermaking process. He added tree bark and hemp ends to early and small scale papermaking processes, which allowed for its large scale manufacture and widespread use.

Paper making technology made its way to the Silk Road and thus the world stage, with its ability to record and spread information changing the course of history forever. 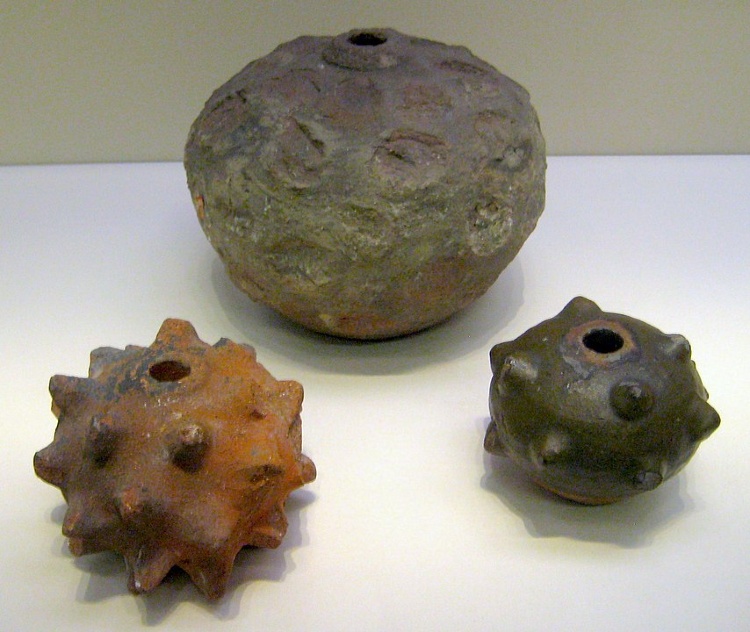 Originally known as ‘black powder’, gunpowder was invented in around 1000 BC by Chinese Taoist alchemists. Wei Boyang – also known as the ‘father of alchemy’ – described it in 142 AD as a substance that could violently ‘fly and dance’.

Ironically, it was further developed by alchemists who were attempting to produce a substance which would allow for eternal life. Experiments involved heating 10% sulphur and 75% saltpetre with the aim of transforming the body.

By the 10th century, black powder was being used in fireworks and signals. It gradually made its way west and was widely used as a tool of warfare. It was still used as an explosive to break up coal and rock deposits until the early 20th century, when it was replaced by dynamite. 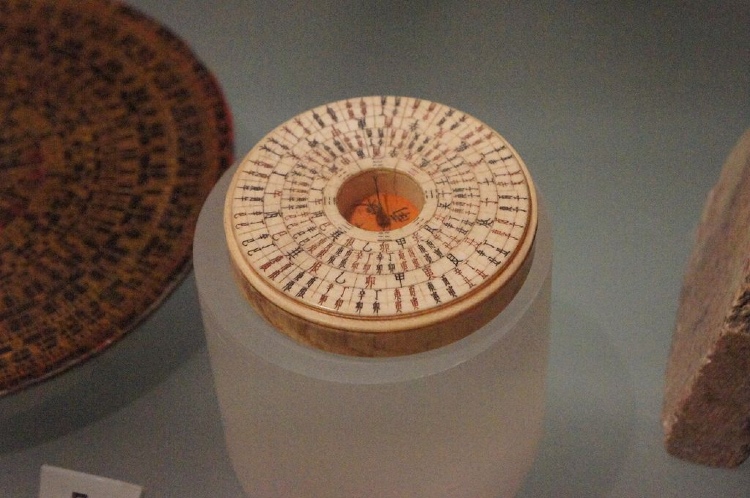 An artefact from Mexico dating to 1000 BC indicates the use of a compass with lodestone, which is a naturally magnetised piece of iron ore. It was the Chinese, however, who had iron which they realised could be magnetised by coming into contact with lodestone.

During the Han Dynasty in 202 BC – 220 AD, the Chinese began using north-south oriented lodestone ladle and bowl shaped compasses for divination and geomancy. It was originally used as part of the practice of Feng Shui, which aims to harmonise individuals with their surrounding environment.

By 1000 AD, navigational compasses were used on Chinese ships. Arab traders who came to China later learned of the technology and transported it west.

In 1974, the earliest specimen of woodblock printing was unearthed from a Tang tomb near Xi’an. Printed on hemp paper between 650 and 670 AD, it consists of a Buddhist chant in Sanskrit. Woodblock printing became popular and was widely used during the Tang dynasty, though was expensive and time-consuming.

It was only during the Song Dynasty that a man called Bi Sheng invented moveable type printing. He carved individual characters onto pieces of clay which he then hardened with fire. These pieces were later glued to an iron plate to print a page, then separated and reformulated for another. This technique spread quickly across Europe leading up to the Renaissance, and was later adopted worldwide.

The tea plant is indigenous to western Yunnan. Old Chinese legend has it that tea was first discovered by Shennong, the Chinese ‘father of agriculture’, in around 2,737 BC. In the Tang Dynasty, tea became a popular drink enjoyed by people across a range of social classes.

‘Cha Jing’ (or ‘The Book of Tea’) written by Lu Yu in the Tang Dynasty laid out methods of cultivating, drinking, and classifying different tea, and is considered to be the world’s first monograph about tea.

The world’s oldest living tea tree is in Lin Cang, and is around 3,200 years old.

The banknote, or paper money, was originally called ‘flying money’ because it was so light that it could blow out of your hand. First developed in China, it originated as merchant receipts of deposit during the Tang Dynasty, since copper coins were heavy and bulky to transport during large commercial transactions. Paper money was then quickly adopted by the government for forwarding tax payments.

‘Real’ paper money that was exchangeable for metal coins came into use in China in the 10th century. In contrast, the first Western money was issued in Sweden in 1661.

Until recently, it was believed that inhabitants of the Arabian Peninsula were the world’s first brewers. However, in 2013, 9,000-year-old pottery was found in the Henan province that revealed the presence of alcohol which dated a millennia earlier than anything previously discovered.

The tribal people of Central Asia discovered ‘frozen out’ wine in the freezing climate of the 3rd century, whereby from wine that had frozen was a remaining pure alcohol liquid. From there, it is theorised that brandy and whiskey were invented. Freezing then became a test for alcohol content, and distilled wine was made in China by the 7th century. In comparison, the west discovered alcohol distillation in Italy in the 12th century.

Studies also show that in ancient China alcohol was not only used as a spiritual offering, but was also widely consumed in the form of a 4-5% beer.

The world’s first mechanical clock, which featured a bird design, was invented by Buddhist monk Yi Xing in 725. Water was dripped onto a wheel which would complete one revolution in 24 hours. His invention also allowed for a bell to be rung automatically every hour, and a drum beaten every quarter-hour, which essentially meant it was a striking clock. In the late 10th century, this technology was used for military clock towers.

In 1092, inventor Su Song developed a clock called the Cosmic Empire, which was 200 years before the mechanical clock was invented in Europe. 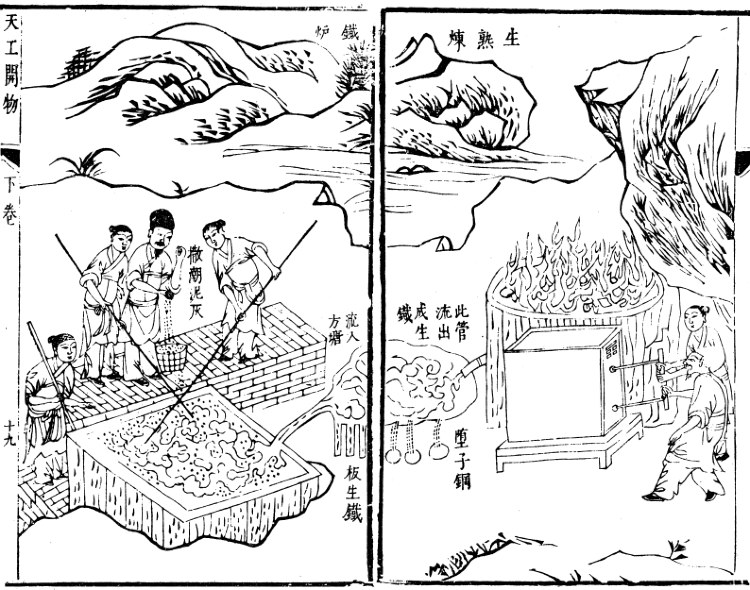 Chinese iron workers smelting iron ore to make pig iron and wrought iron in 16th century. The left half of the illustration shows a fining process, while the right half displays men operating a blast furnace. This illustration is an original from the Tiangong Kaiwu encyclopedia printed in 1637, written by the Ming Dynasty encyclopedist Song Yingxing (1587-1666).

Archaeological research has confirmed that cast iron, made from melting pig iron, was developed in China by the early 5th century BC during the Zhou Dynasty. The Chinese were able to cast iron into both functional and ornamental shapes. With the development of annealing – a way of allowing metal or glass to cool slowly in order to toughen it – China started making ploughshares, longer swords, and even buildings out of iron.

In contrast, blast furnaces existed in the west from the late 8th century AD, and cast iron wasn’t widely available in Europe before 1380.

Though we think of the crossbow as a weapon used during wars in the middle ages, it dates back to as early as China in 2000 BC. Evidence for their existence consists of bronze metal triggers and bolts which were discovered at a State of Chu burial site in Hubei. Handheld crossbows with complex trigger mechanisms have also been found with the magnificent Terracotta Arms in the tomb of Qin Shihuang.

In the 4th century BC, repeating crossbows also became common, and writers from the Han Dynasty attributed the success of numerous battles at the time to soldiers and cavalry units having been trained to use them in formation. 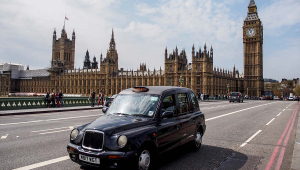 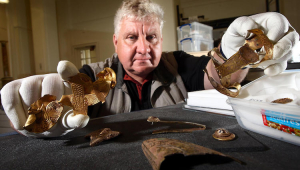 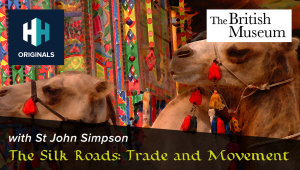 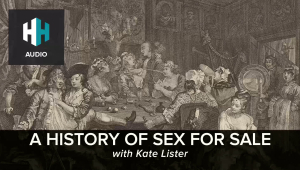 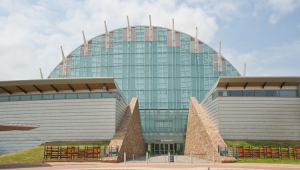 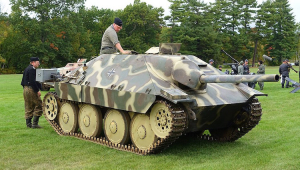