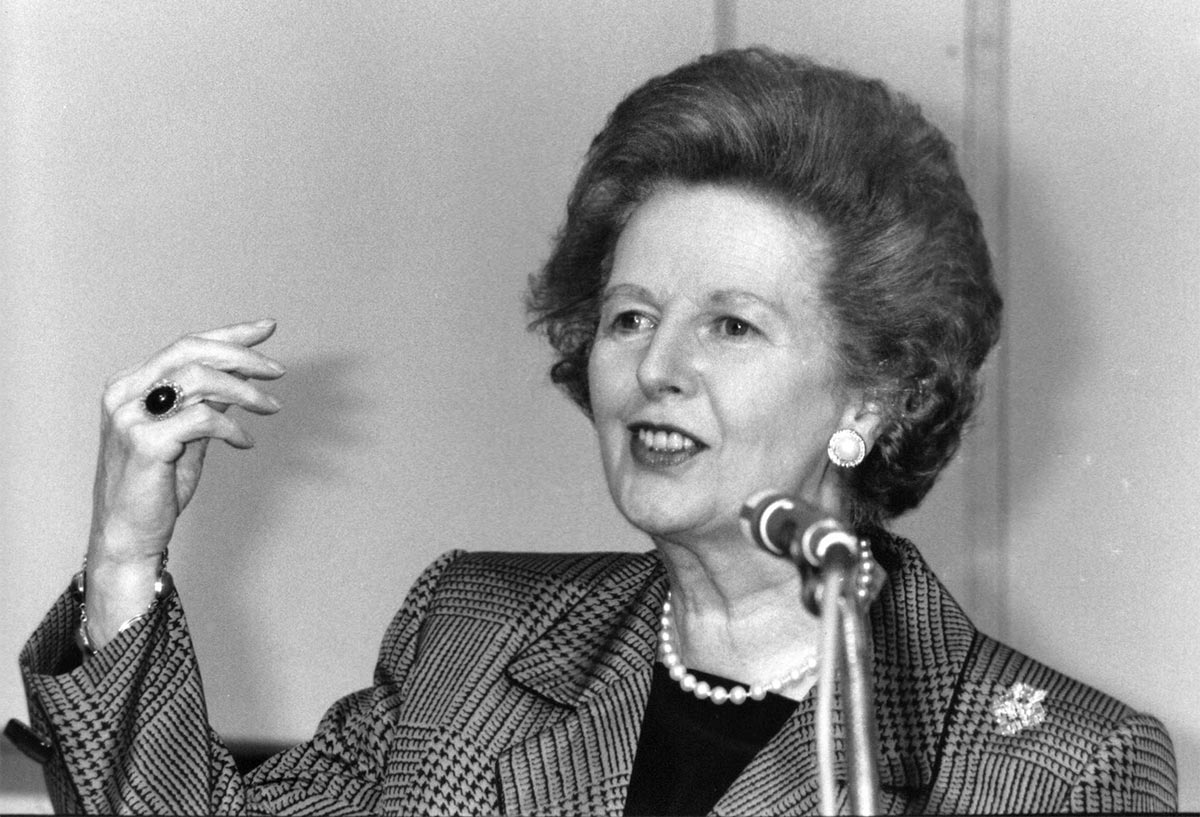 On 4 May 1979, one of the most influential and divisive Prime Ministers in British history took office – Margaret Thatcher. She was a greengrocer’s daughter who defied the odds to study Chemistry at Oxford. Her remarkable journey through politics started in 1950, when she first ran for Parliament. In 1959, she entered the House of Commons, rising steadily within the Conservative Party. By the mid 1970s she became the leader of the Party, a position she would hold onto for the next 15 years. Under her leadership the Conservative Party managed to win the 1979 election, making Margaret Thatcher the first woman to hold the position. To this day she is the longest continuously serving Prime Minister in British history, changing the country through large scale economic reforms.

Thatcher was well known for her oratory skills, which have left us with a plethora of memorable quotes. As with many other politicians, she had writers assisting her. Most famously Sir Ronald Millar wrote Thatcher’s ‘The lady’s not for turning’ speech for the 1980 Conservative Party Conference, which gained her a five-minute standing ovation from her fellow delegates. To be taken more seriously she took public speaking lessons to force down her pitch, creating her distinctive way of talking.

Here is a collection of some of Margaret Thatcher’s most remarkable quotes, showcasing a political legacy that lasted for decades. 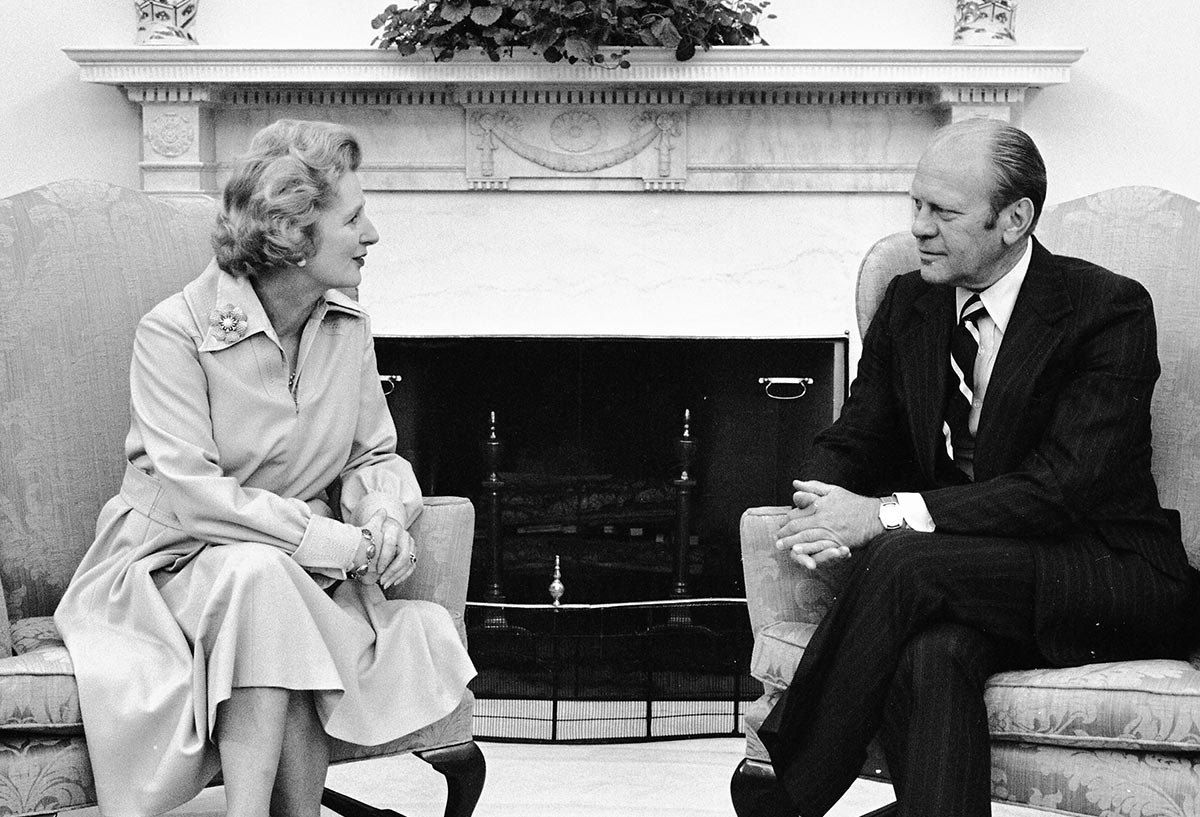 Thatcher with President Gerald Ford in the Oval Office, 1975

(Speech to members of the National Union of Townswomen’s Guilds, 20 May 1965) 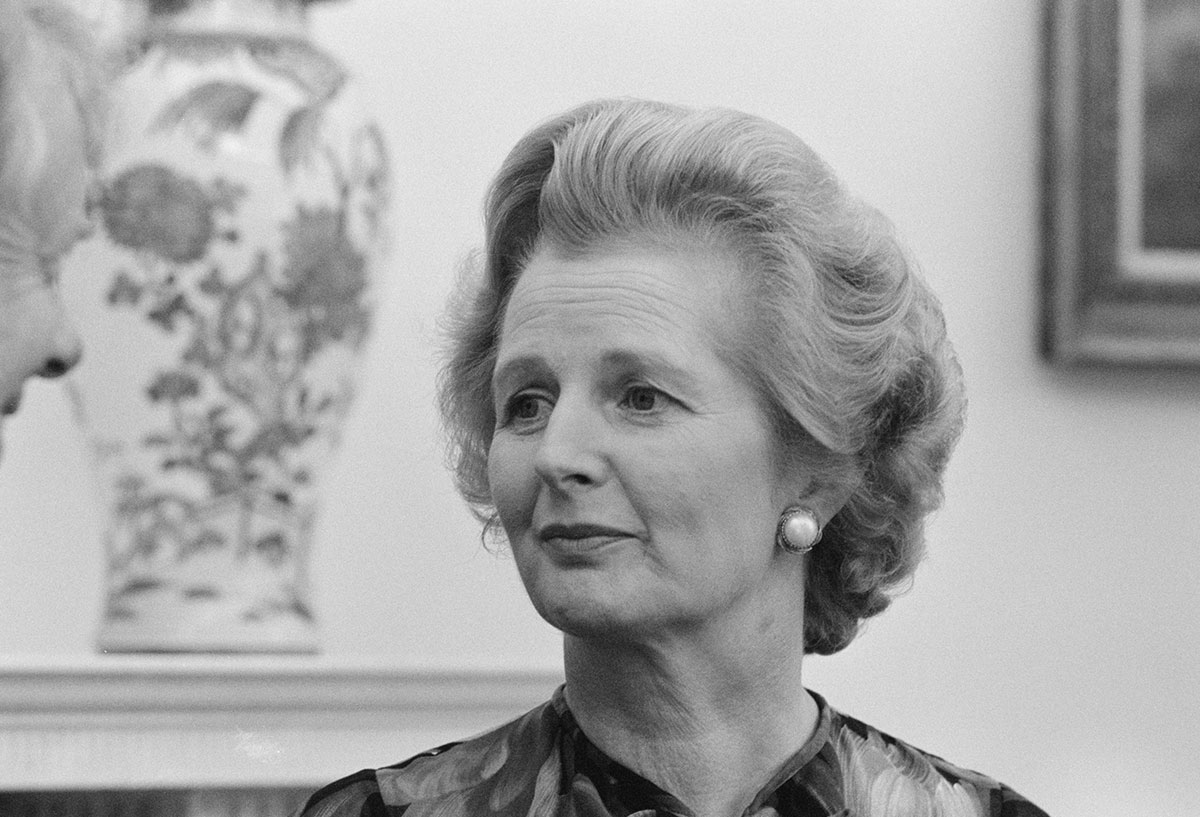 ‘I started life with two great advantages: no money, and good parents.’ 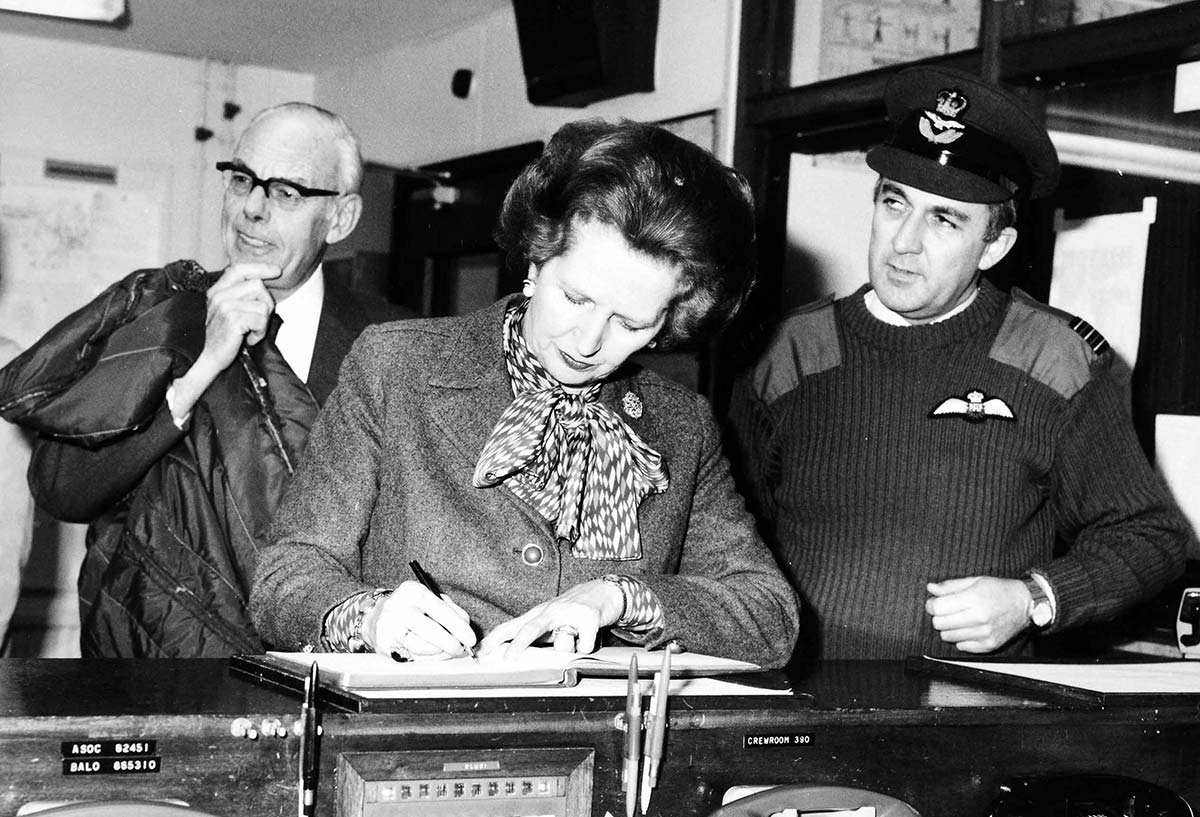 Margaret and Denis Thatcher on a visit to Northern Ireland, 23 December 1982

‘I don’t think there will be a woman Prime Minister in my lifetime.’ 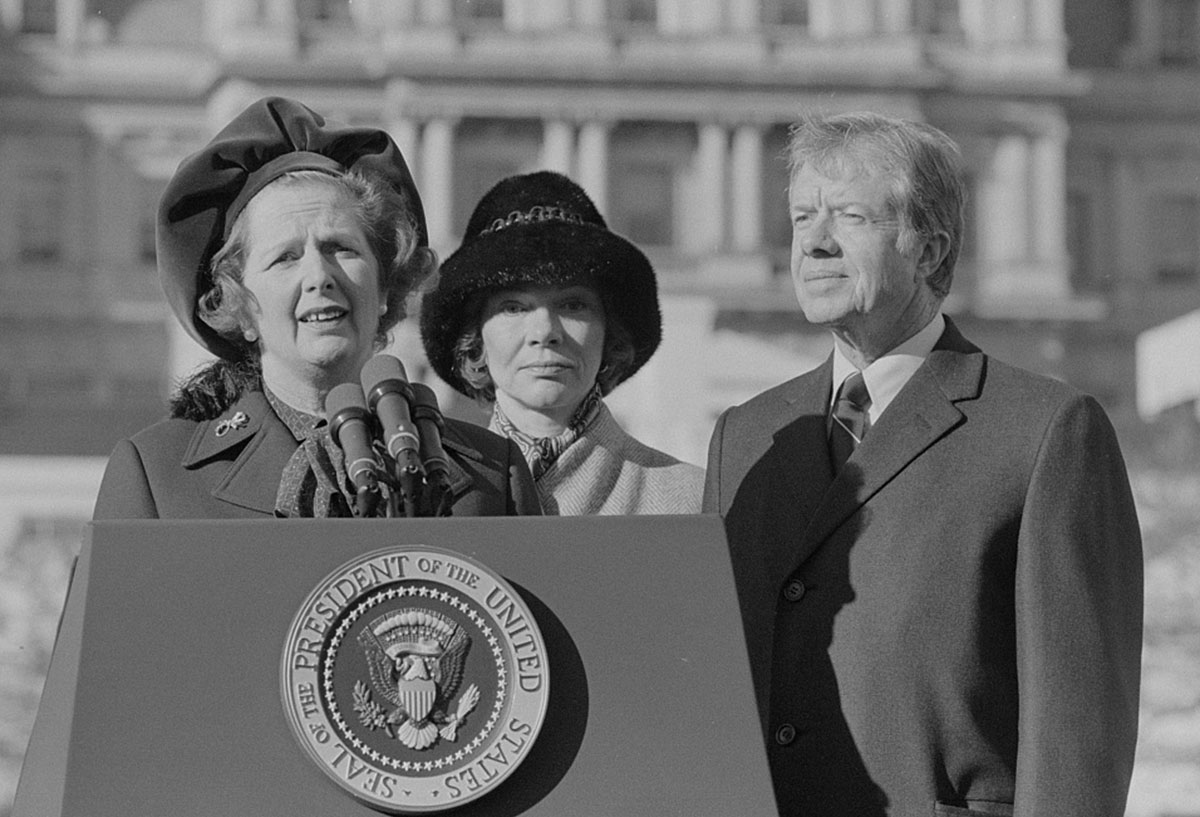 (Following her first election victory in 1979) 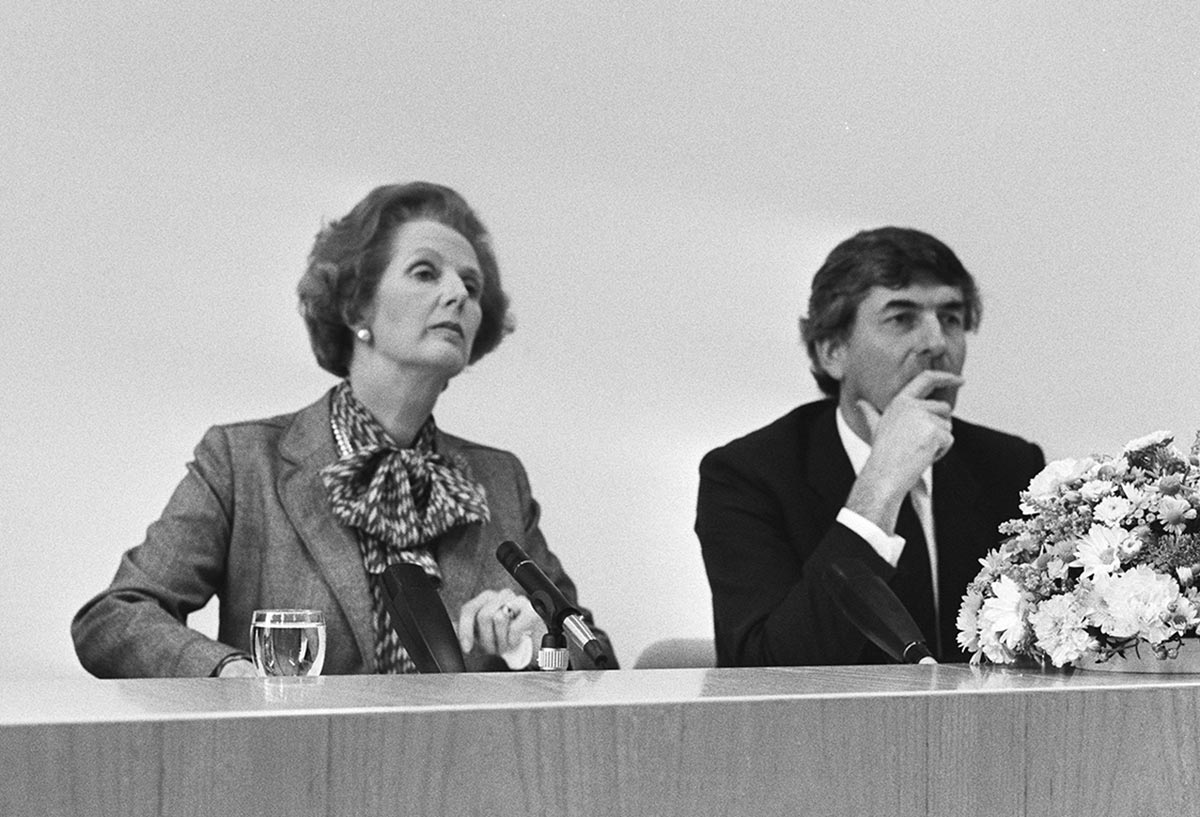 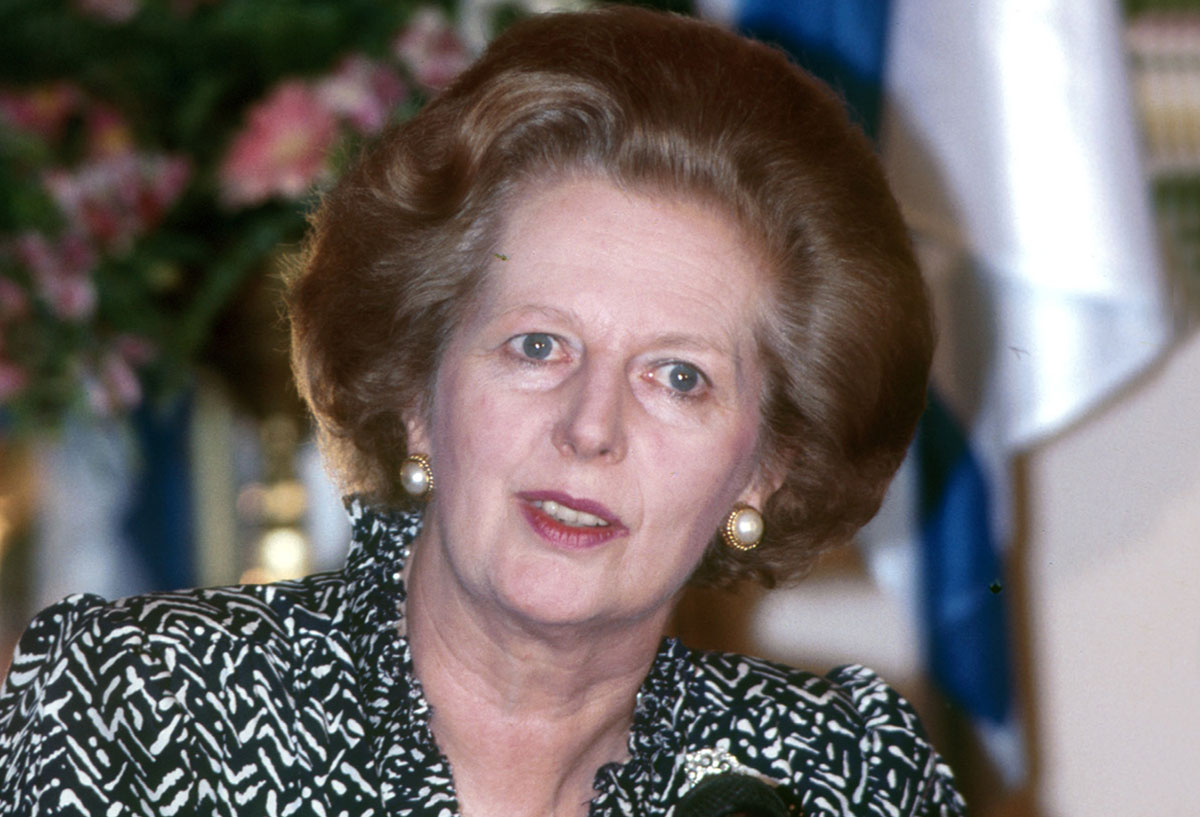 ‘To those waiting with bated breath for that favourite media catchphrase, the U-turn, I have only one thing to say: You turn if you want to. The lady’s not for turning.’ 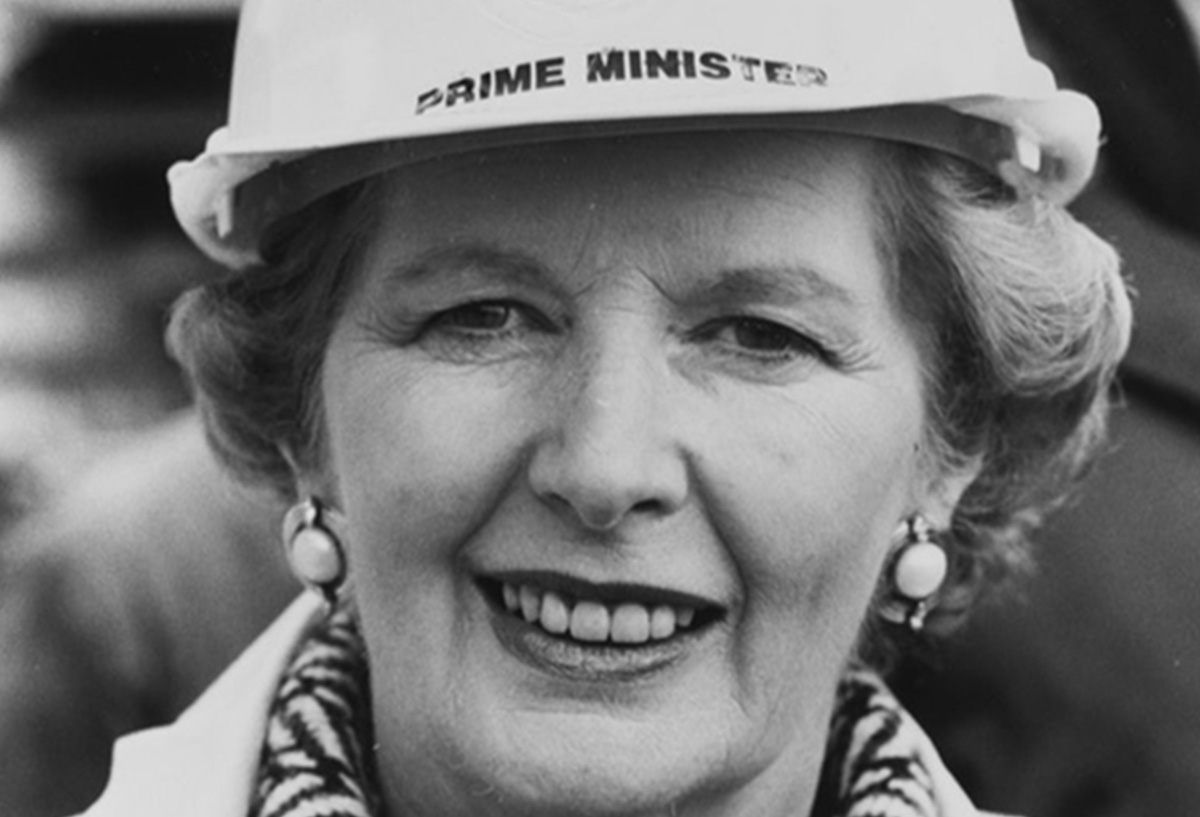 ‘Economics are the method; the object is to change the heart and soul.’ 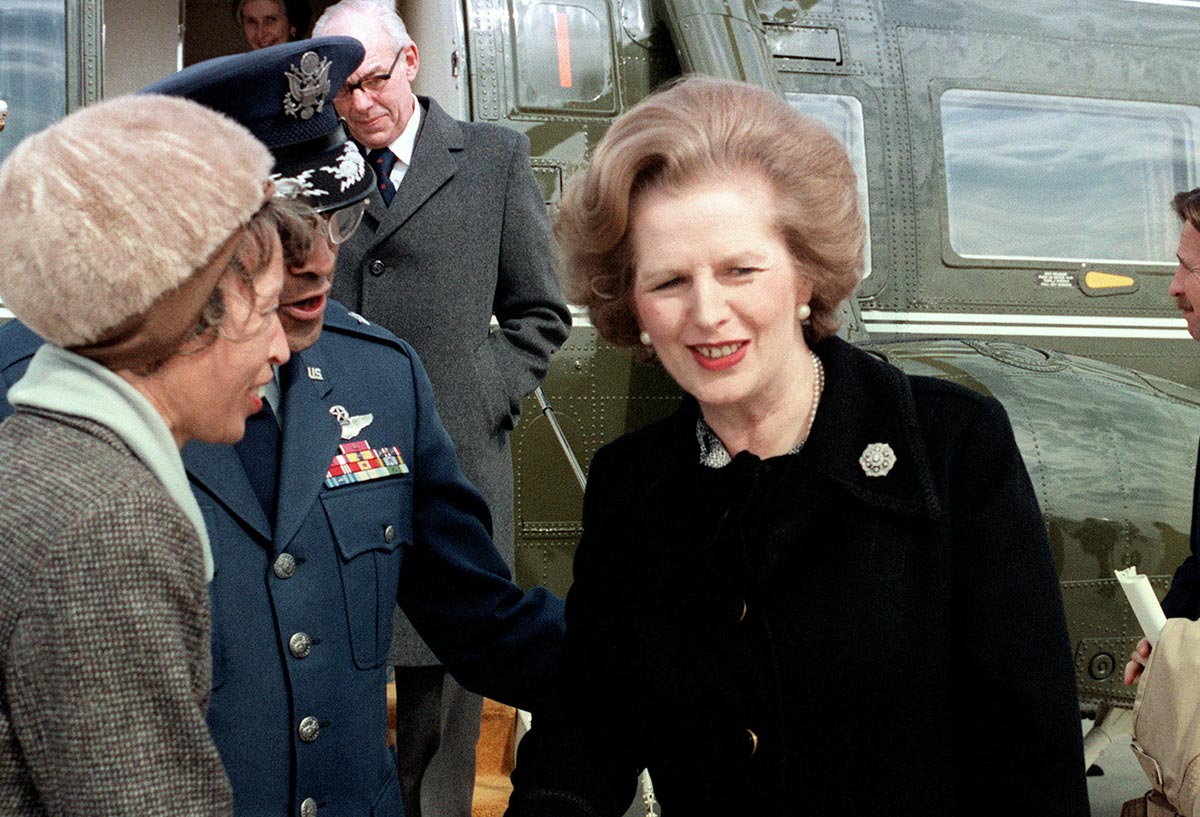 Margaret Thatcher bids farewell after a visit to the United States, 2 March 1981

‘Just rejoice at that news and congratulate our forces and the marines. … Rejoice.’ 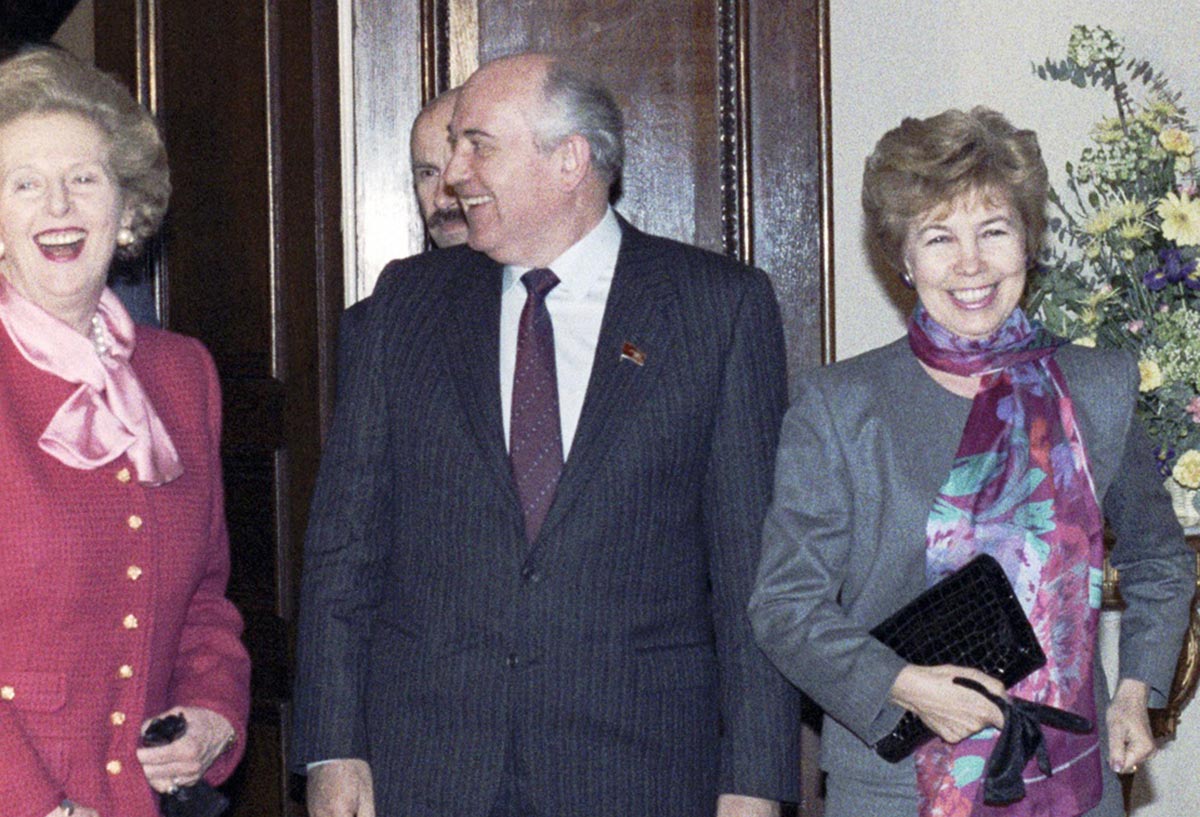 The meeting between Mikhail Gorbachev, on an official visit to Great Britain and Margaret Thatcher (left) at the embassy of the USSR

‘I like Mr. Gorbachev. We can do business together.’ 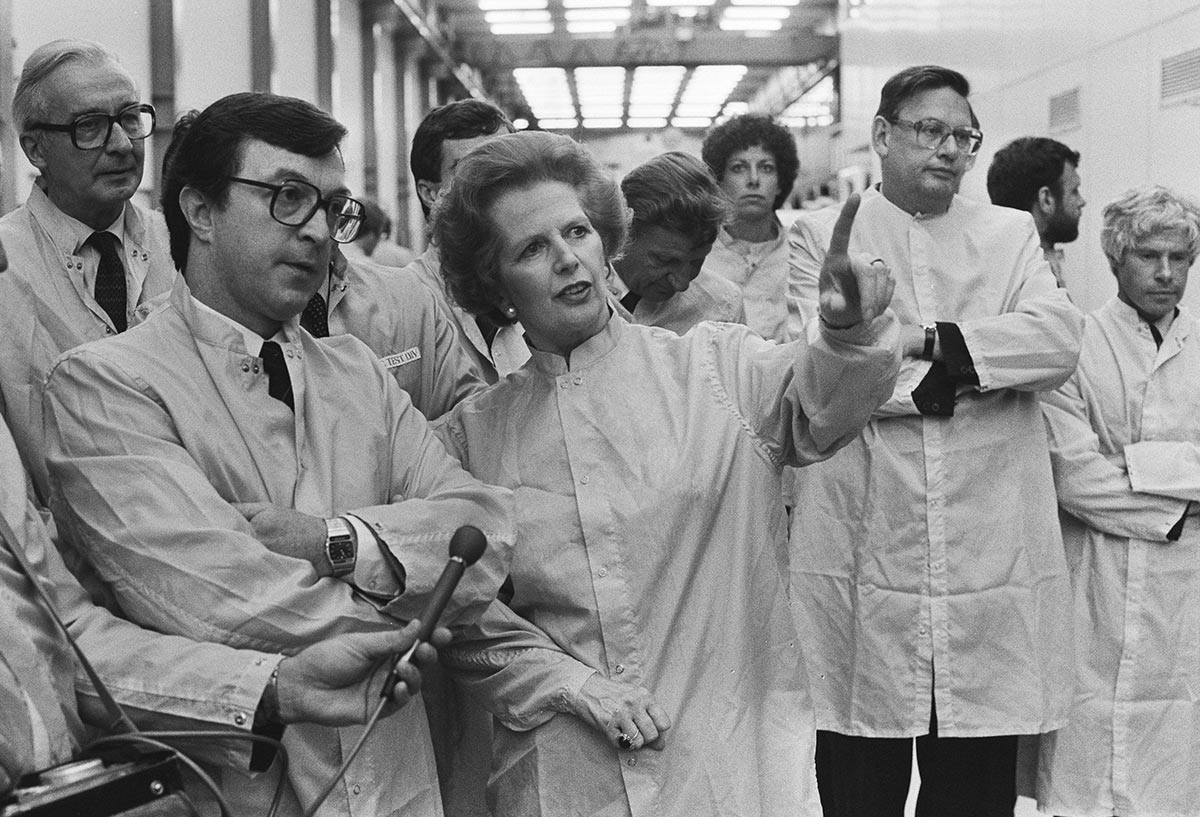 Margaret Thatcher during a visit to the Netherlands, 19 September 1983

‘I always cheer up immensely if an attack is particularly wounding because I think, well, if they attack one personally, it means they have not a single political argument left.’ 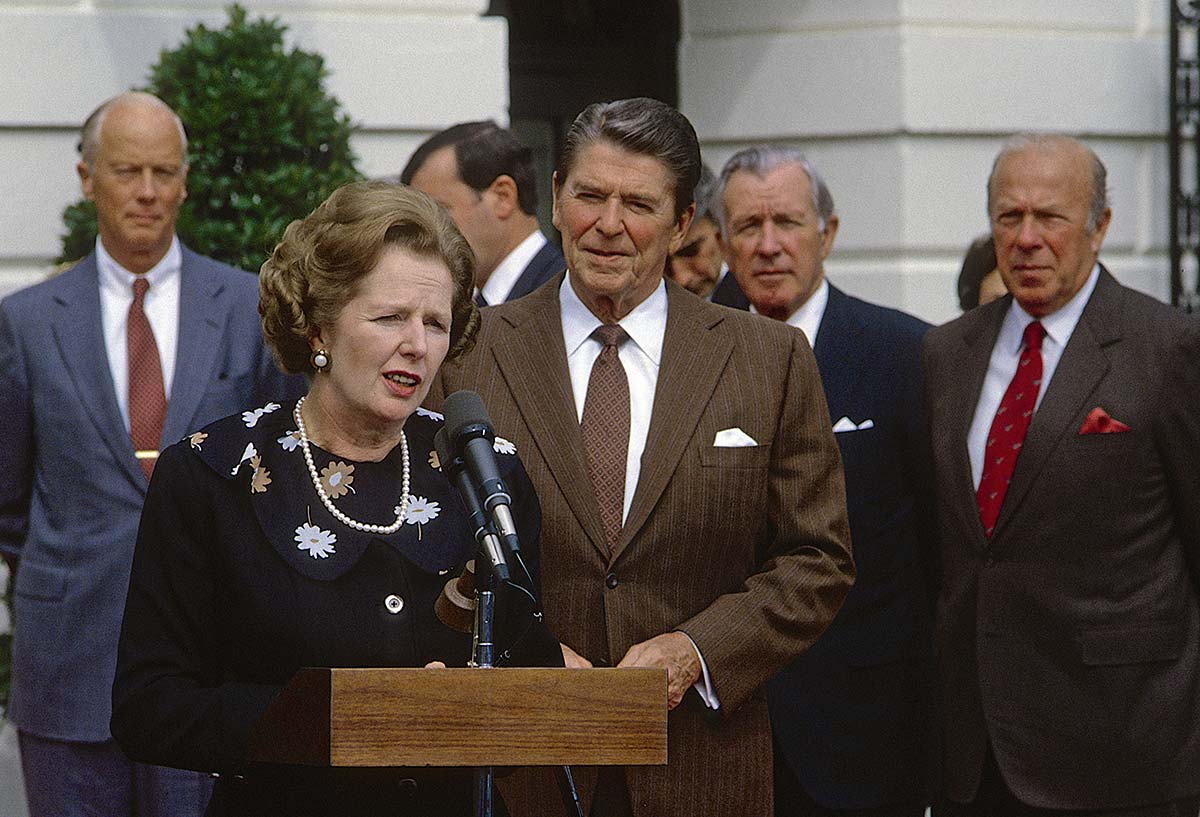 Margaret Thatcher and President Ronald Reagan speak at The South Portico of the White House after their meetings in the Oval Office, 29 September 1983

‘We have become a grandmother.’

(Remarks on becoming a grandmother, 1989) 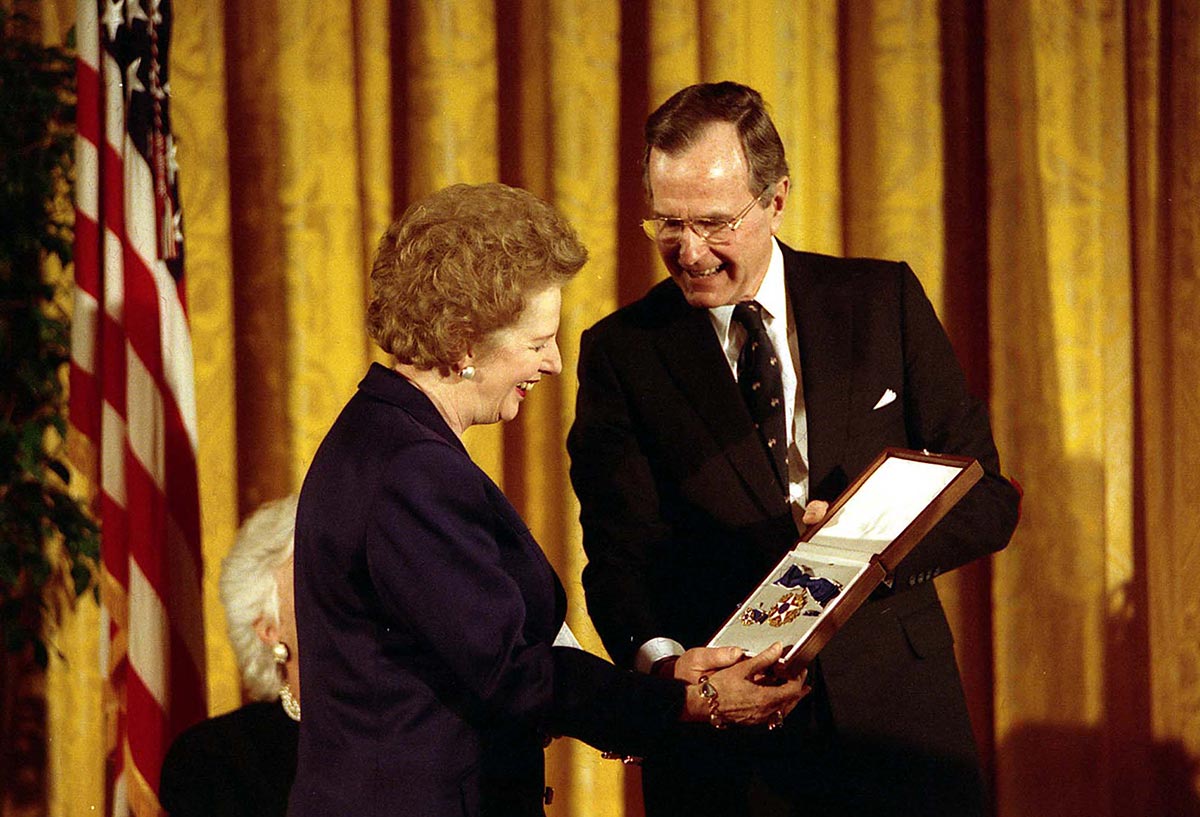 President Bush presents the Presidential Medal of Freedom to former British Prime Minister Margaret Thatcher in the East Room of the White House. 1991

‘We’re leaving Downing Street for the last time after eleven-and-a-half wonderful years, and we’re very happy that we leave the United Kingdom in a very, very much better state than when we came here eleven and a half years ago.’