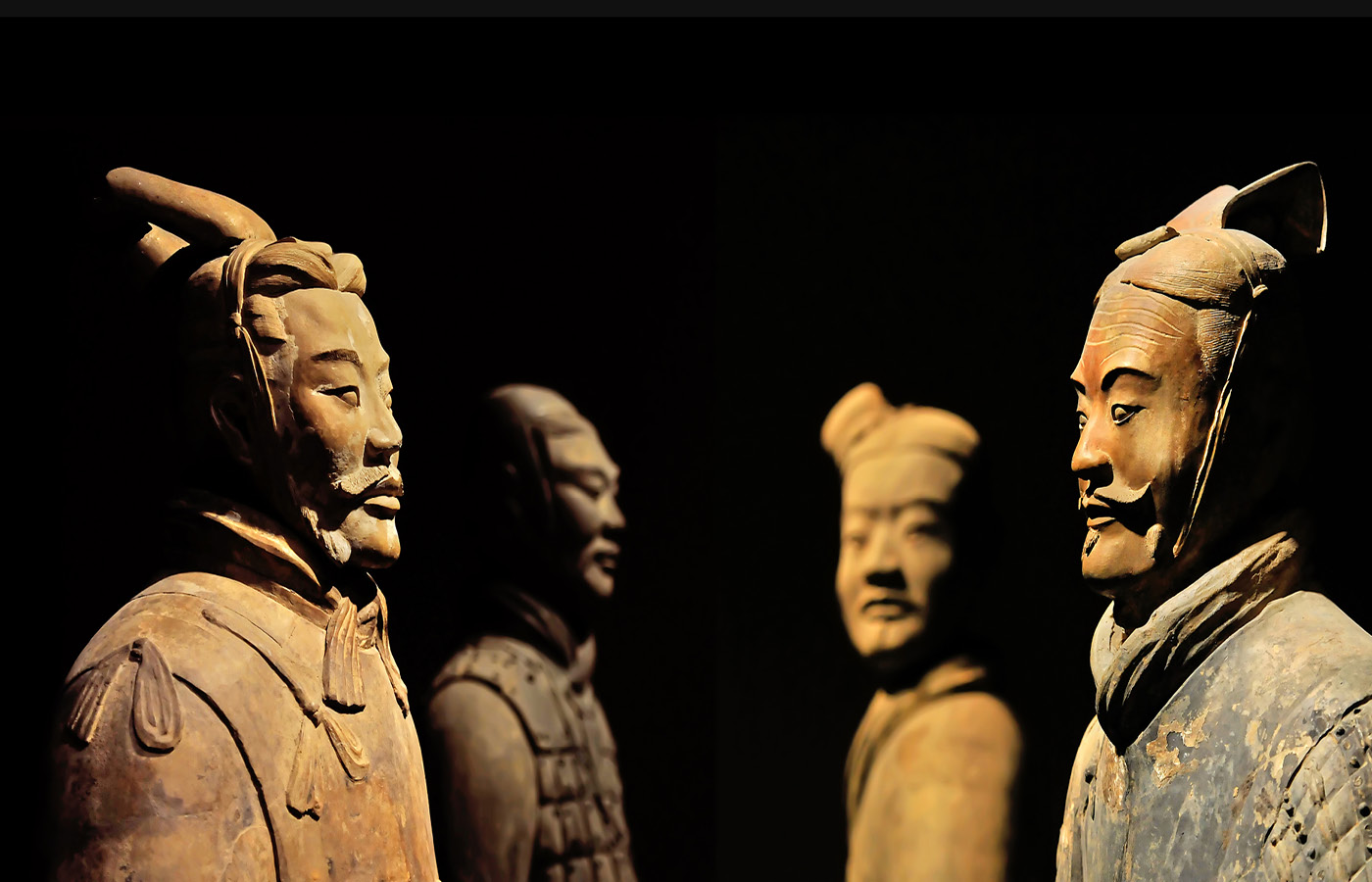 Close up of the soldiers in the Terracotta Army
Image Credit: Hung Chung Chih/Shutterstock.com

Located in the Lingtong District in Xi’an, China, the Terracotta Army is one of the world’s most famous mausoleums. Built in the 3rd century BC, the mausoleum is the tomb of China’s first emperor, Qin Shi Huang (c. 259-210 BC), and houses some 8,000 life-size statues depicting the ruler’s army.

The tomb and the Terracotta Army were only discovered in 1974 by a group of local farmers. Since then, extensive archaeological excavations have been carried out at the site and on the warriors themselves, but there are still parts of the tomb complex that haven’t been explored.

Now a UNESCO World Heritage Site, the Terracotta Army draws visitors from all over the world who are eager to see this incredible archaeological site and learn about the importance of Qin Shi Huang in global history.

1. The army was built for the first Emperor of China, Qin Shi Huang 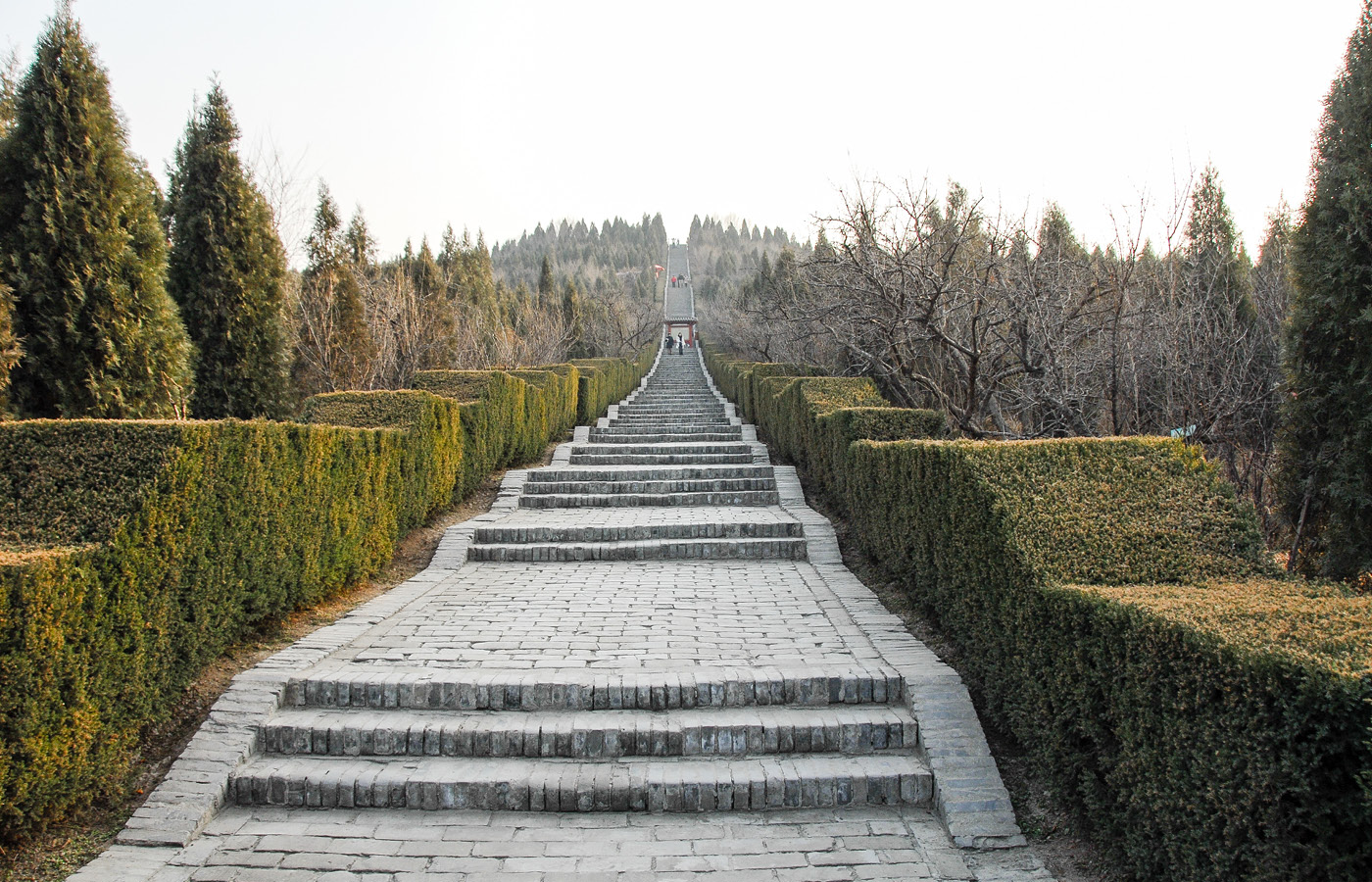 Zhao Zheng, his birth name, was born in 259 BC and became King of Qin at the age of 13. Known for being a ruthless and paranoid leader (he was constantly afraid of being assassinated and attempts were made), Qin launched attacks on the other Chinese states resulting in unification in 221 BC. Zheng then declared himself Qin Shi Huang, First Emperor of Qin. 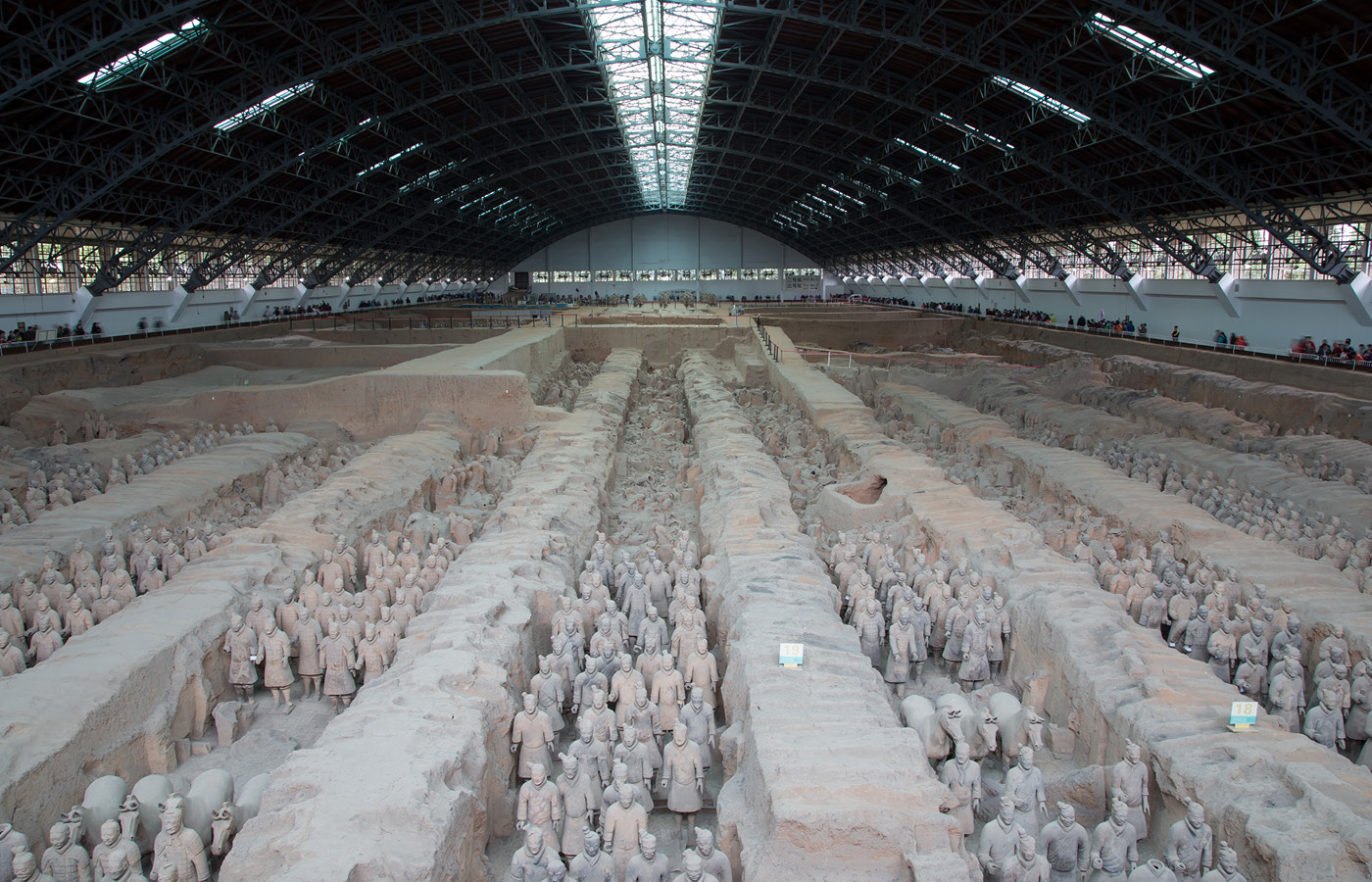 The mausoleum is the largest known tomb in Chinese history and some 700,000 workers helped construct it and its contents. At the bottom of the 76-metre-tall tomb is a sprawling city necropolis, modelled on the capital Xianyang.

Qin was buried with weapons, his Terracotta Army to protect him, treasures and his concubines. Traps were set to attack looters and a mechanical river with flowing mercury was installed. All the workers that made the mechanical devices were buried alive in the tomb to protect its secrets. 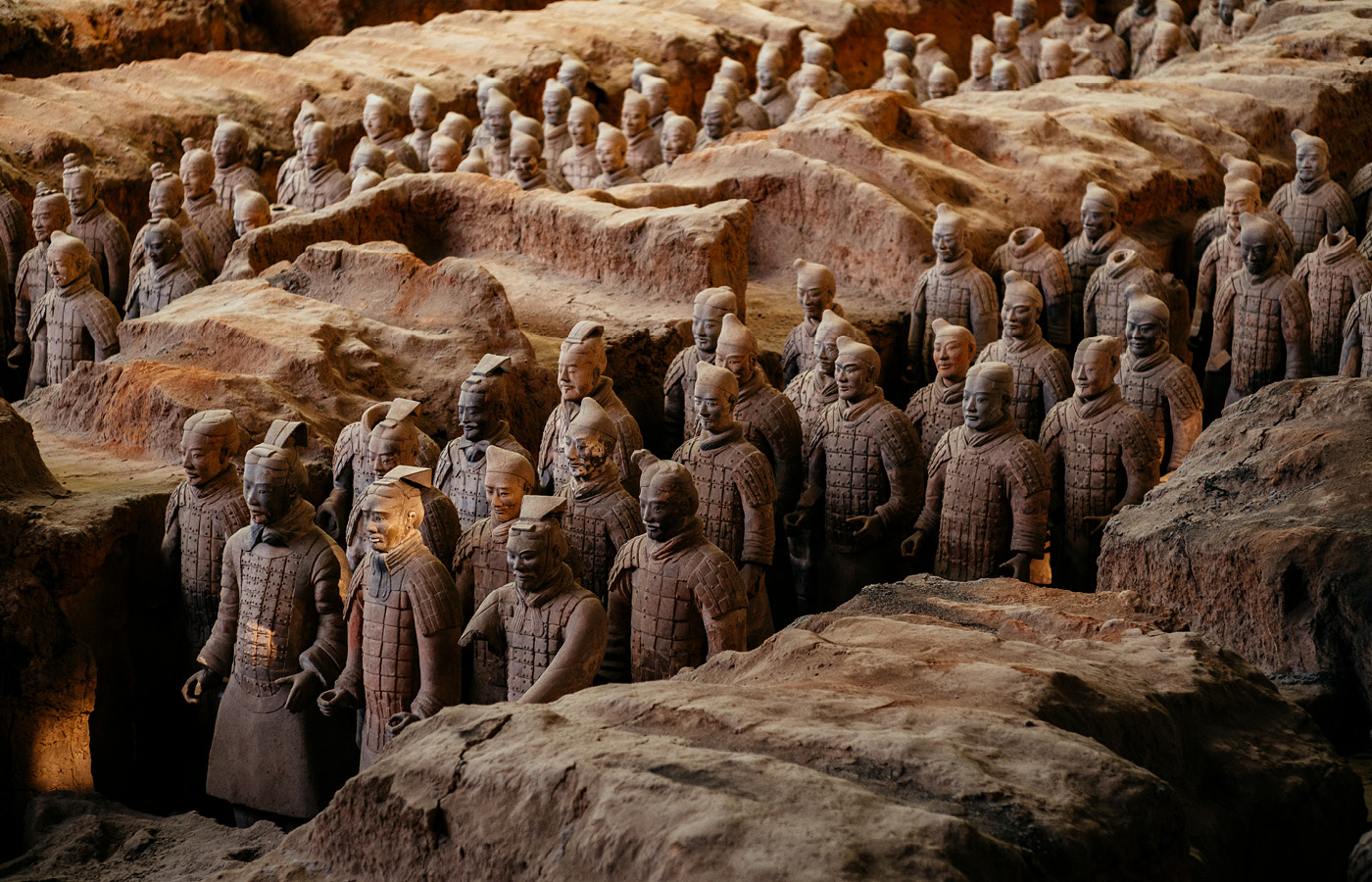 It is estimated that there are over 8,000 terracotta soldiers at the site with 130 chariots, 520 horses and 150 cavalry horses. Their purpose is not only to show Qin’s military strength and leadership but to also protect him after death.

4. The soldiers are roughly life-size 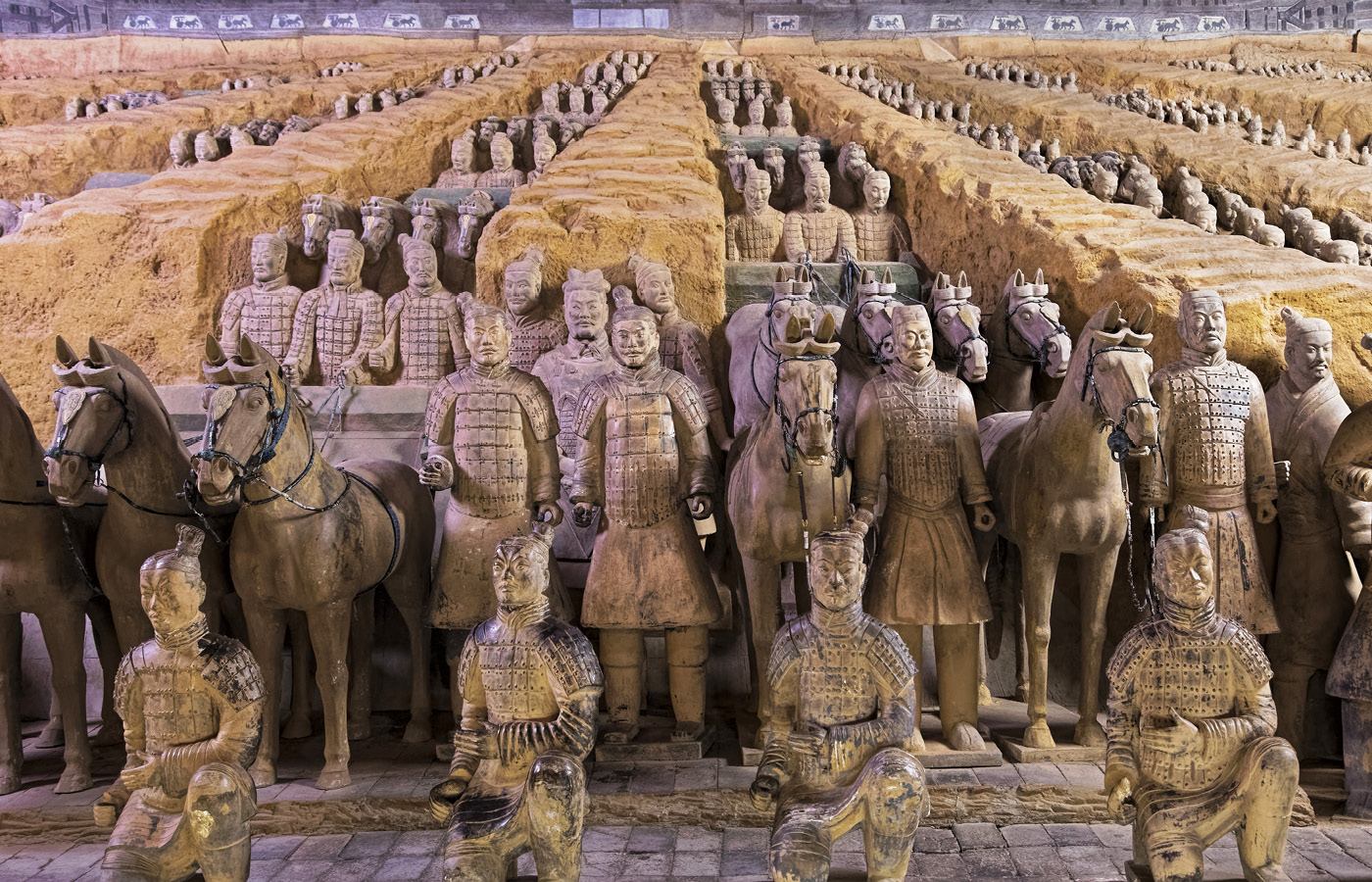 The larger figures are the most senior members of the army and they are set out in a military formation. Military personnel include infantry, cavalrymen, chariot drivers, archers, generals and lower-ranking officers. It seems that the faces of each of the soldiers is different but form from 10 basic shapes that match their ranks and positions in the army. 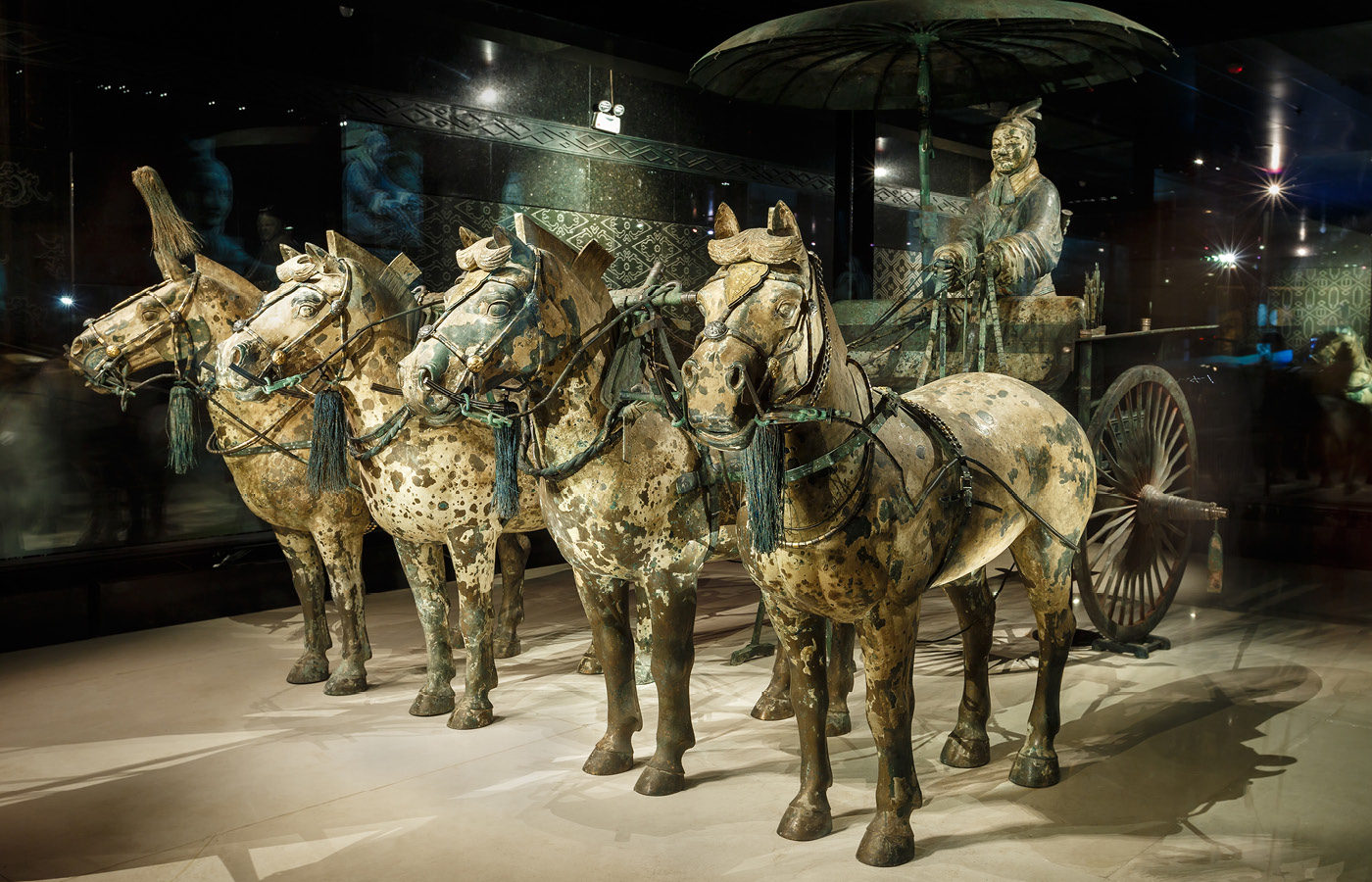 One of the bronze chariots

Two broken bronze chariots were found in the mausoleum. It took 5 years to restore the chariots which are now on display at the Museum of the Terracotta Warriors. In addition to the army, other terracotta figures that Qin would need in the afterlife included musicians, acrobats and officials.

6. Originally the army was painted with bright colours 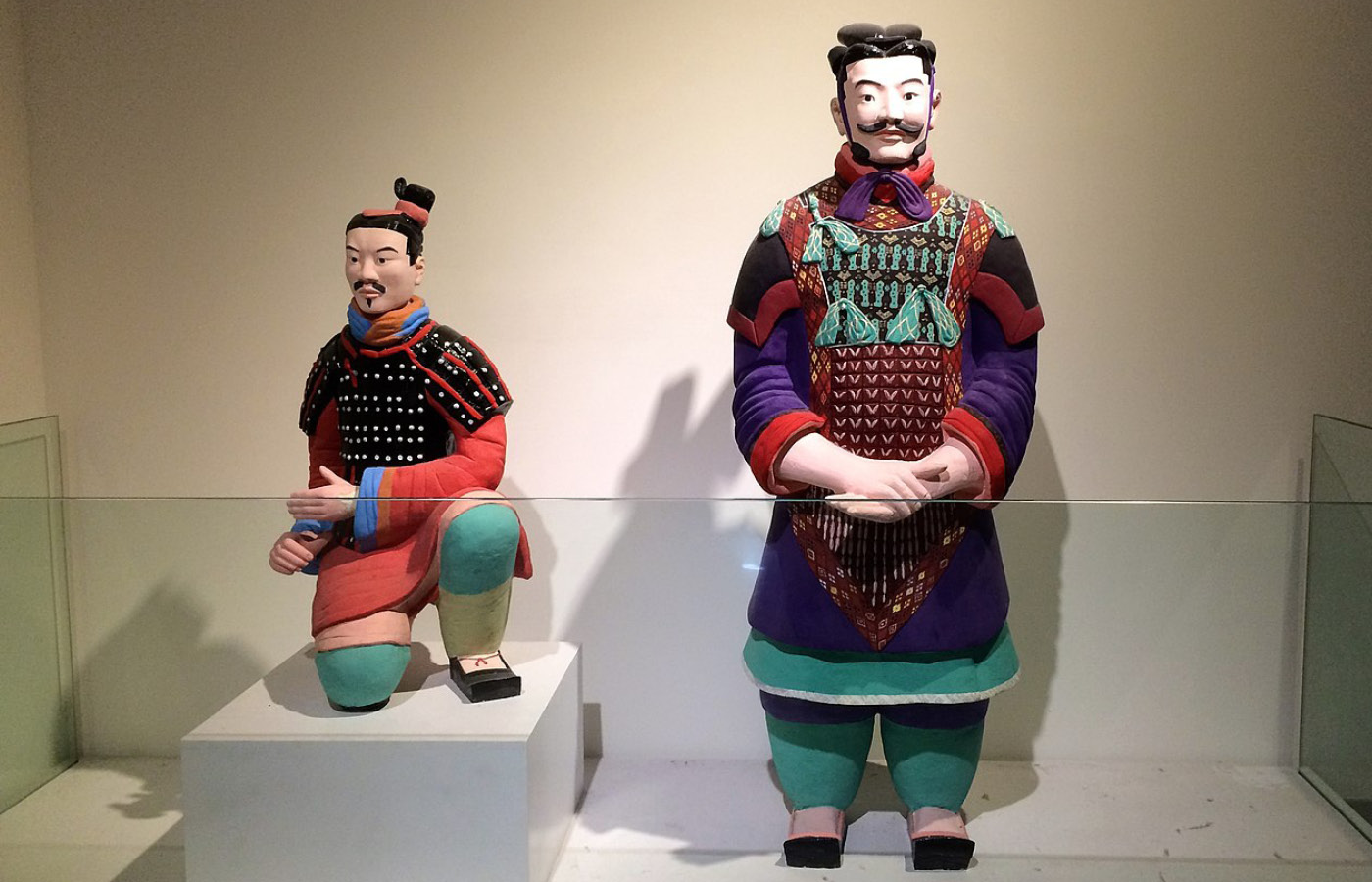 Research suggests that the army would have had cream faces, green, blue and red uniforms and armour and black and brown detailing. Other colours used included brown, pink and lilac. The faces were painted to give them a realistic feel.

7. Skilled labourers and craftsmen were used

Each body part was made separately in workshops and then moulded together before being placed in the pits. To ensure quality and craftsmanship, each piece was inscribed with its maker’s name. The colourful paint would have peeled off when the soldiers were excavated and removed from the mud.

The soldiers were also equipped with real weapons including swords, bows, arrows and pikes.

8. Over 1 million people visit the Terracotta Army every year 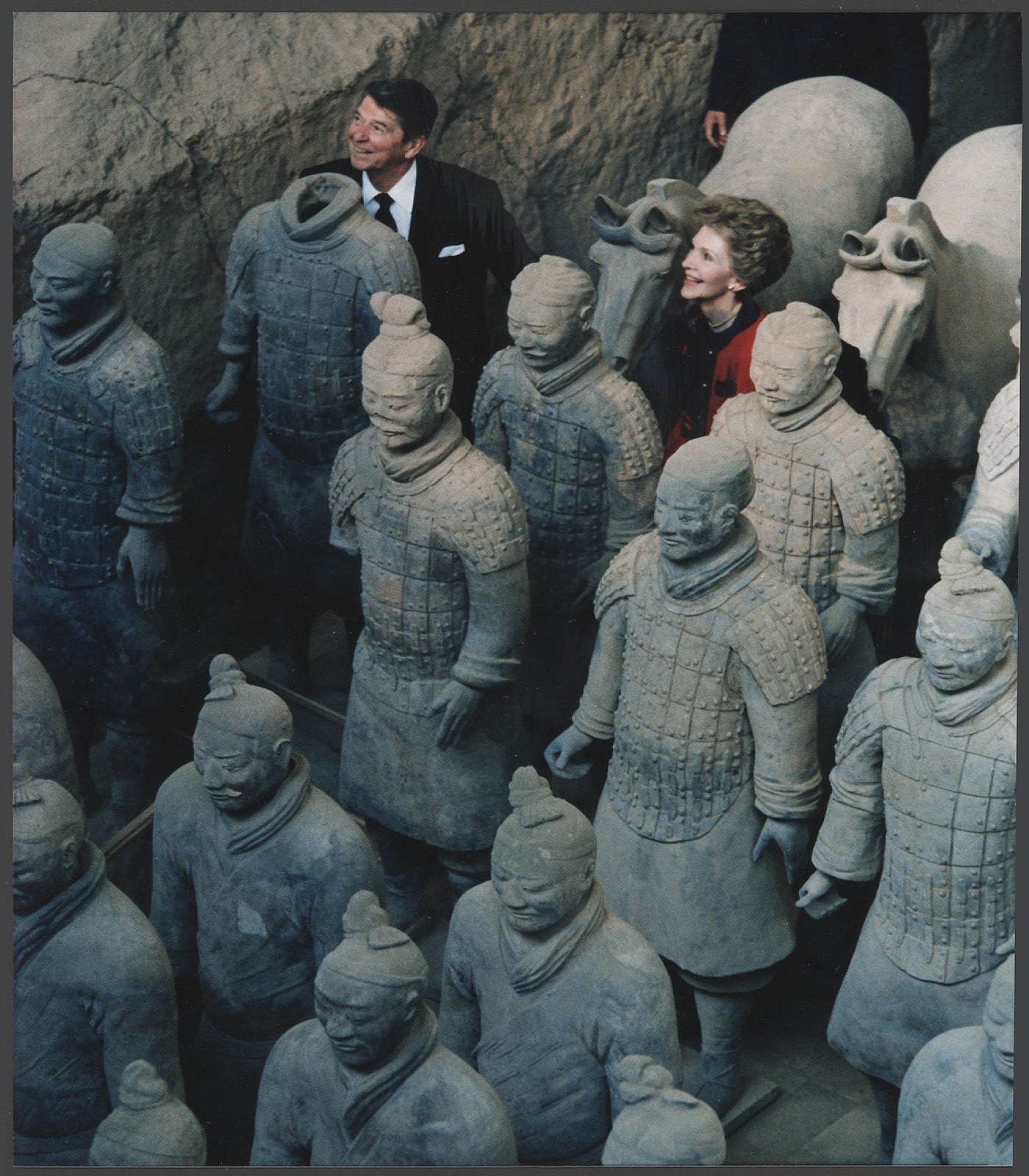 The Reagans standing with the Terracotta Army, 1985

There is a global fascination with the Terracotta Army. Exhibitions housing artefacts have been held all over the world including the British Museum in 2007, drawing the biggest number of tourists ever for the museum.