Riches to Ruins: The History of London From the Romans to the Great Fire | History Hit 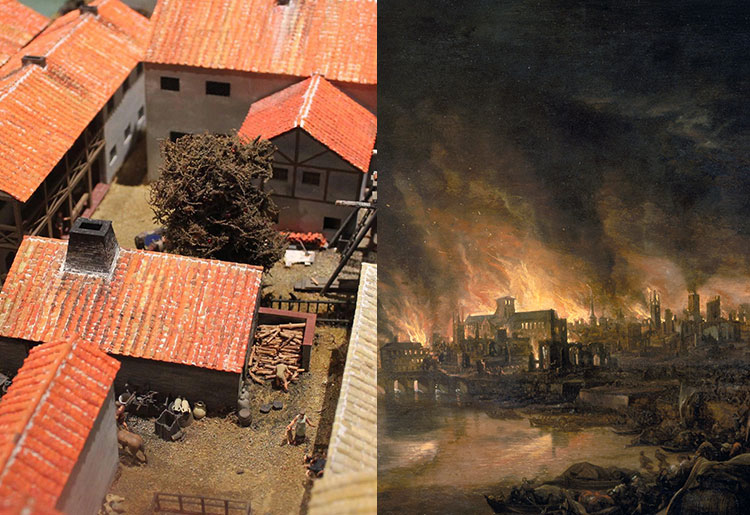 A large part of London, and almost all of the old walled city that lay at its heart, was burned down over the space of a few short days during the Great Fire of September 1666.

But what was London like before the Great Fire? How did life in the city evolve over the centuries, from the time of the Romans through to the early modern era?

This account rakes through the ashes of the Great Fire to paint a picture of the lost city of London.

London was founded by the Romans in c. 47-48AD, and named by them Londinium. It was sited on the Thames at a point at which it was still tidal, enabling easy access to the sea, and the empire beyond. It was destroyed by Britons under Boudica in 60 or 61, and then rebuilt in the late 1st to early 2nd centuries. It then declined through the 3rd century, and into the 4th, and was abandoned in the early 5th.

The initially pagan Romans became Christianised in the early 4th century. The diet of the average citizen of Roman London was healthy. There were shops in and around the Forum where all manner of imported and locally produced foodstuffs could be bought. The population of Roman London was at most a few tens of thousands. Although governed from Rome, it became an important administrative centre, with an impressive Basilica. It was also important as a commercial and trading centre.

There was a hiatus in the occupation of London before the Saxons arrived in numbers at the turn of the 6th and 7th centuries. When they arrived, they made their principal settlement about a mile upstream of Roman Londinium, and named it Lundenwic. Lundenwic was raided by Vikings in 839, 851 and 872. Then, in 886, the Mercian King Alfred the Great restored Roman Londinium, moved the Saxon settlement within its defensive walls and renamed it Lundenburg. In the process, he set out the street plan that still in essence survives to this day. The Viking raids continued, though.

The Saxons became Christianised by the early 7th century; the Vikings by the early 11th. Evidence from rural Saxon sites around London indicates that the agricultural economy centred on cereals and cattle. The population of Saxon London was at most several thousand. It was a regional rather than a national administrative centre, although it was the site of both outdoor and indoor assemblies. It was also “a great emporium”.

The first of the Four Horsemen of the Apocalypse, Conquest, visited in 1066. Saxon London soon fell to the Norman William the Conqueror, who then issued a charter assuring its citizens of their rights and privileges. War visited in ‘The Anarchy’ of 1135-1141, when there was bitter fighting between rival claimants to the throne. London supported Stephen, and when his rival Matilda attempted to seize control of the city, it resisted, and she withdrew. War would return many times. 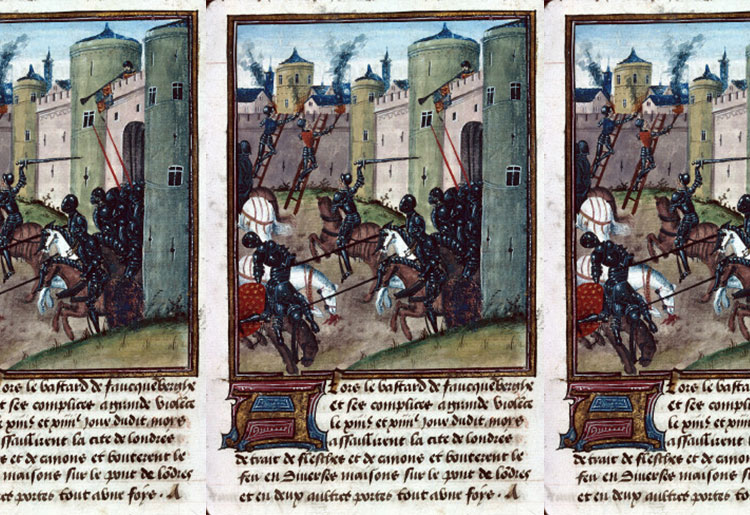 Depiction of the Lancastrian siege of London in 1471, when the city was attacked by a Yorkist sally.

In 1265, during the Second Barons’ War, London supported the barons, and their leader convened England’s first representative Parliament in Westminster. Famine visited in 1257-1258, and again in 1314-1317.  And Plague visited in 1348-1349, and returned repeatedly. Death followed.

Half of the population of London died in the 1348-1349 outbreak now known as the ‘Black Death’. In the aftermath, the demand for labour exceeded the supply. And at the same time, the workforce had its wages frozen and was subject to Poll Taxes. Civil unrest followed in the ‘Peasants’ Revolt’ of 1381. During the Wars of the Roses, between 1455-1485, London was an important centre of political machination, and its Tower the scene of a series of chilling politically motivated murders. There was also some military action in the city.

The predominant religion of the medieval period was Catholicism, which pervaded all areas of life. There was a major phase of church building and rebuilding in London at this time. A number of monastic houses were also founded or refounded, only to be dissolved between 1536-1540. A community of Jews became established in the late 11th century, only to be expelled in 1290 (and not readmitted until 1656).

The staple foods were those of the baker and the butcher. Local water sources became contaminated and unsafe to drink, such that ale and beer became staple drinks. Disease was widespread. The herbal treatments available were of limited efficacy. The population of London was 80,000 in 1300, and 40,000 in 1377, with persons of colour present in small numbers. 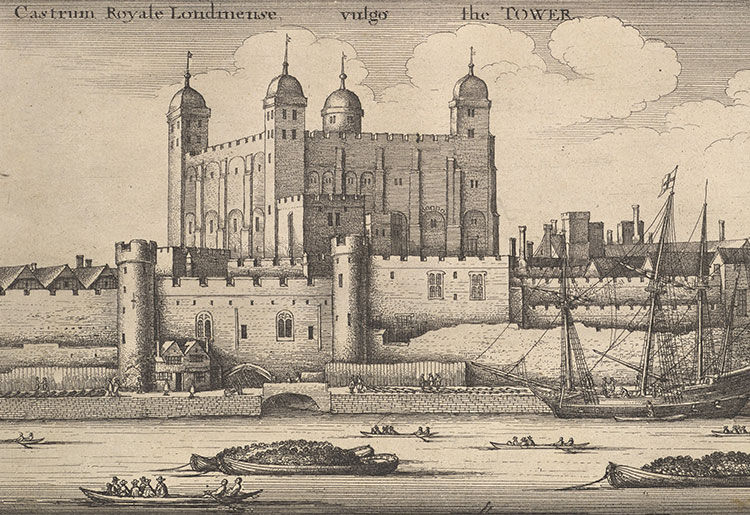 London in the medieval period became in part self-governing, under the Corporation, headquartered at the Guildhall. Legal training became established in the ‘Inns of Court’. Trade prospered, and Livery Companies began to be founded. For entertainment, there were civic ceremonies, fairs, tournaments, rough sports and gambling, and there were brothels. There were also, though, miracle and morality plays.

In 1534, Henry VIII made himself, rather than the Pope, the Supreme Head of the Church in England. Thereafter, the Church, and the country at large, became increasingly Protestant, and any Catholic threat to the Reformation was dealt with without mercy. In 1558, Elizabeth I became queen, ending Mary’s brief Counter-Reformation, and a period of comparative stability followed.

James I became king in 1601 and saw off the ‘Gunpowder Plot’ in 1605. Charles I succeeded him as king in 1625, and so abused his supposed “divine rights” as to trigger Civil War between supporting Royalists and opposing Parliamentarians in 1642. He was beheaded in Whitehall in 1649. London supported Parliament throughout the war, and was pivotal to its outcome, and there were even battles at Brentford and Turnham Green in 1642. The authoritarianism of the succeeding Commonwealth made it unpopular, and the monarchy was restored in 1660.

In the 17th century, coffee-houses became places where gentlemen transacted business. The population of London was 460,000 in 1665 and 360,000 in 1666 (after the Great Plague of 1665). It had become one of the first true world cities, although to its shame some of its wealth was founded on the trade in enslaved persons. Post-medieval London was home to a diverse array of writers, artists, musicians and “natural philosophers”, and was the nourishing womb of the English Renaissance.

Early on Sunday 2 September 1666, a fire broke out in a bakery on Pudding Lane in the City of London. The blaze spread rapidly through the capital and continued to rage for four days, destroying some 13,200 houses and making roughly 100,000 Londoners homeless.

The devastation would permanently alter the fabric of London life and architecture. After the Great Fire, London came to favour stone and brick buildings over wood, St Paul’s Cathedral was rebuilt as we know it today and a dedicated fire service emerged.

Robert Wynn Jones is a retired professional palaeontologist, and an interested amateur archaeologist and historian. He maintains a website on the history of London up to the time of the Great Fire of 1666, and leads occasional guided walks on related themes. Besides The Flower Of All Cities, published by Amberley Publishing, Jones is also the author of The Lost City of London and Soldiers and Sportsmen All – The Great War Story Of The 24th Battalion, The Royal Fusiliers. He lives in London. 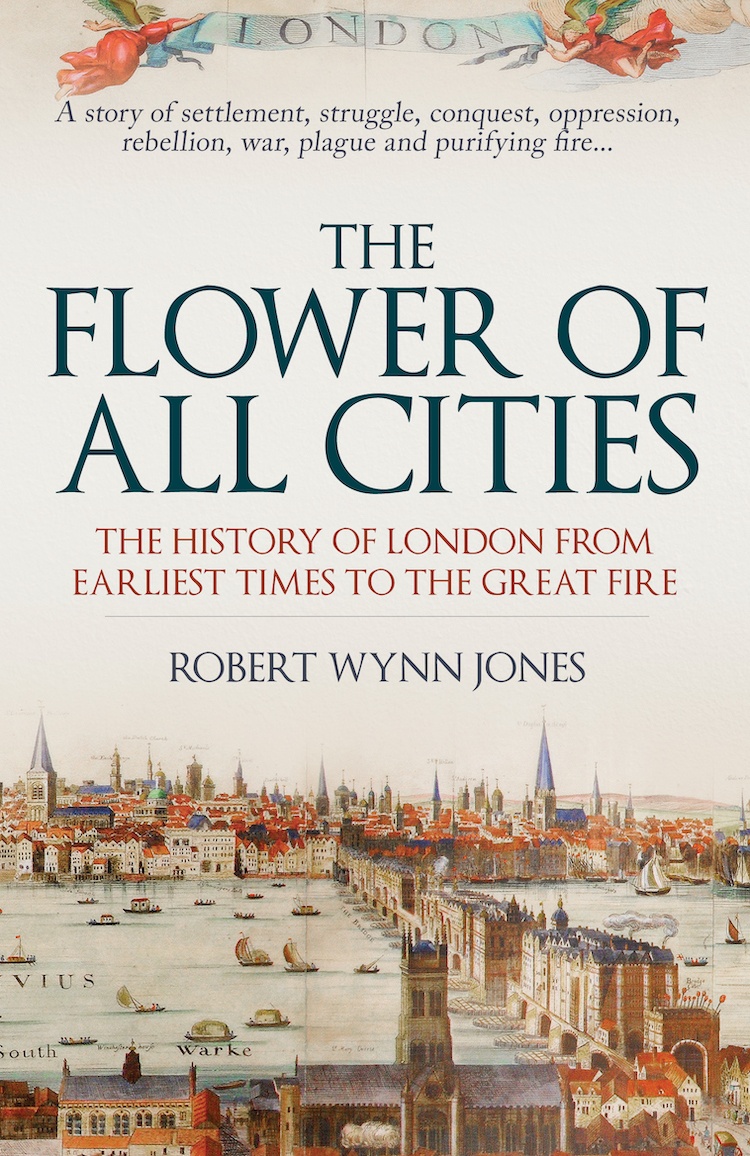 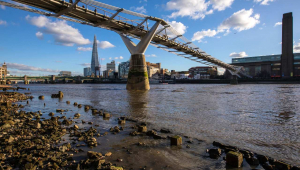 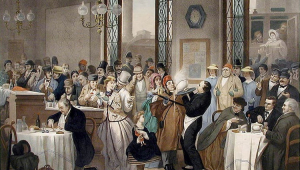 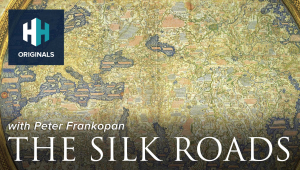 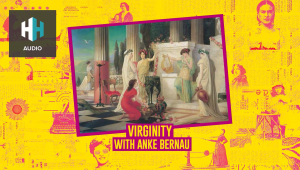 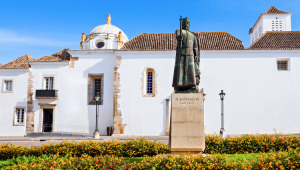