The Most Beautiful Old Train Stations in the World | History Hit 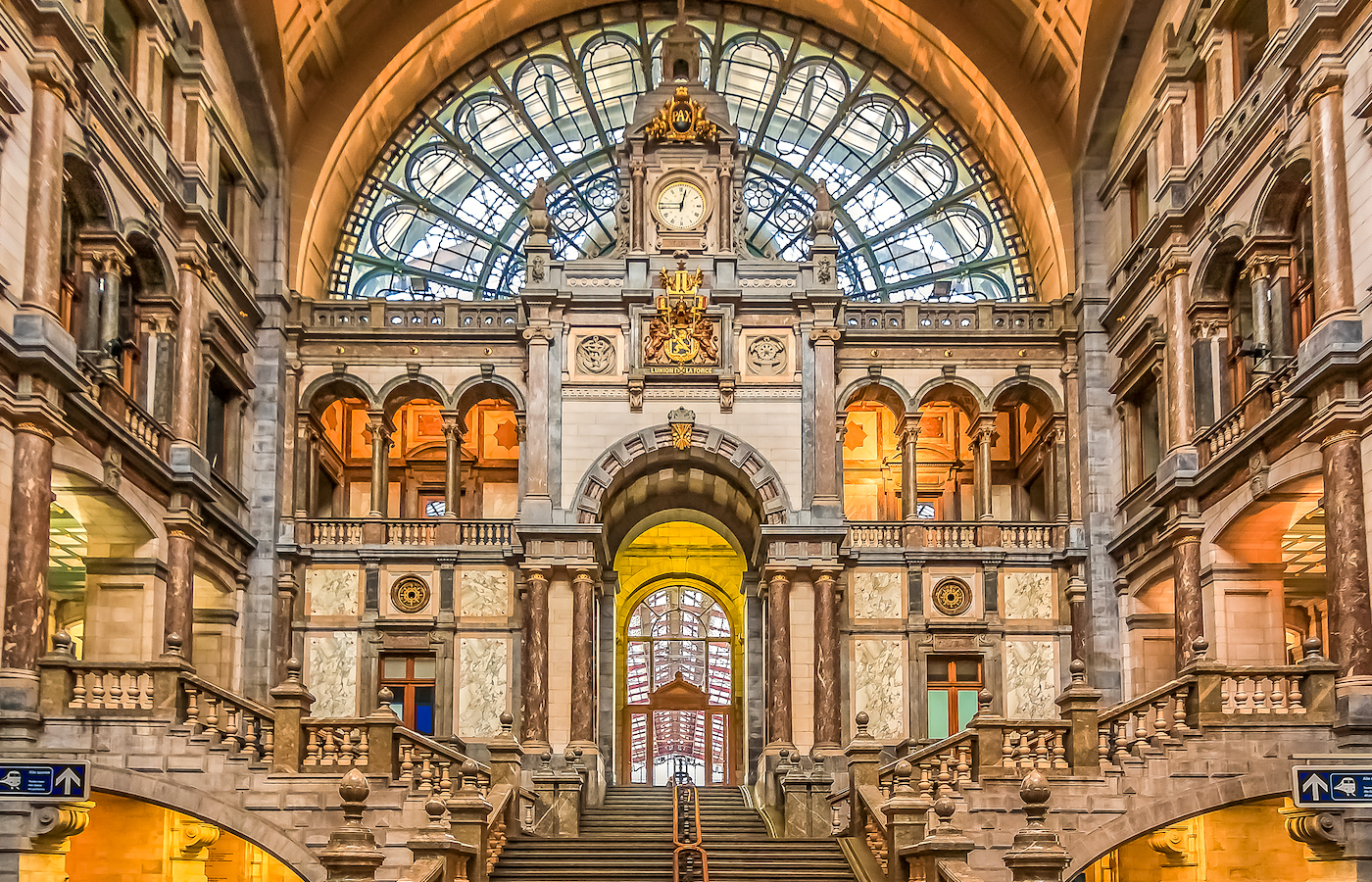 Rail travel isn’t just about getting from A to B. As these magnificent railway stations demonstrate, travelling by train can be an experience worth relishing.

Just pay a visit to Sao Bento station in Porto or Gare de Lyon in Paris, and you’ll find yourself face to face with some of the most magnificent civic architecture ever built. There, city planners took the humble train station, a practical piece of transport infrastructure, and turned it into high art.

So, from vast Victorian-era steam train terminals to an alpine station towering over the Swiss Alps, here are 10 of the most beautiful railway stations in the world. 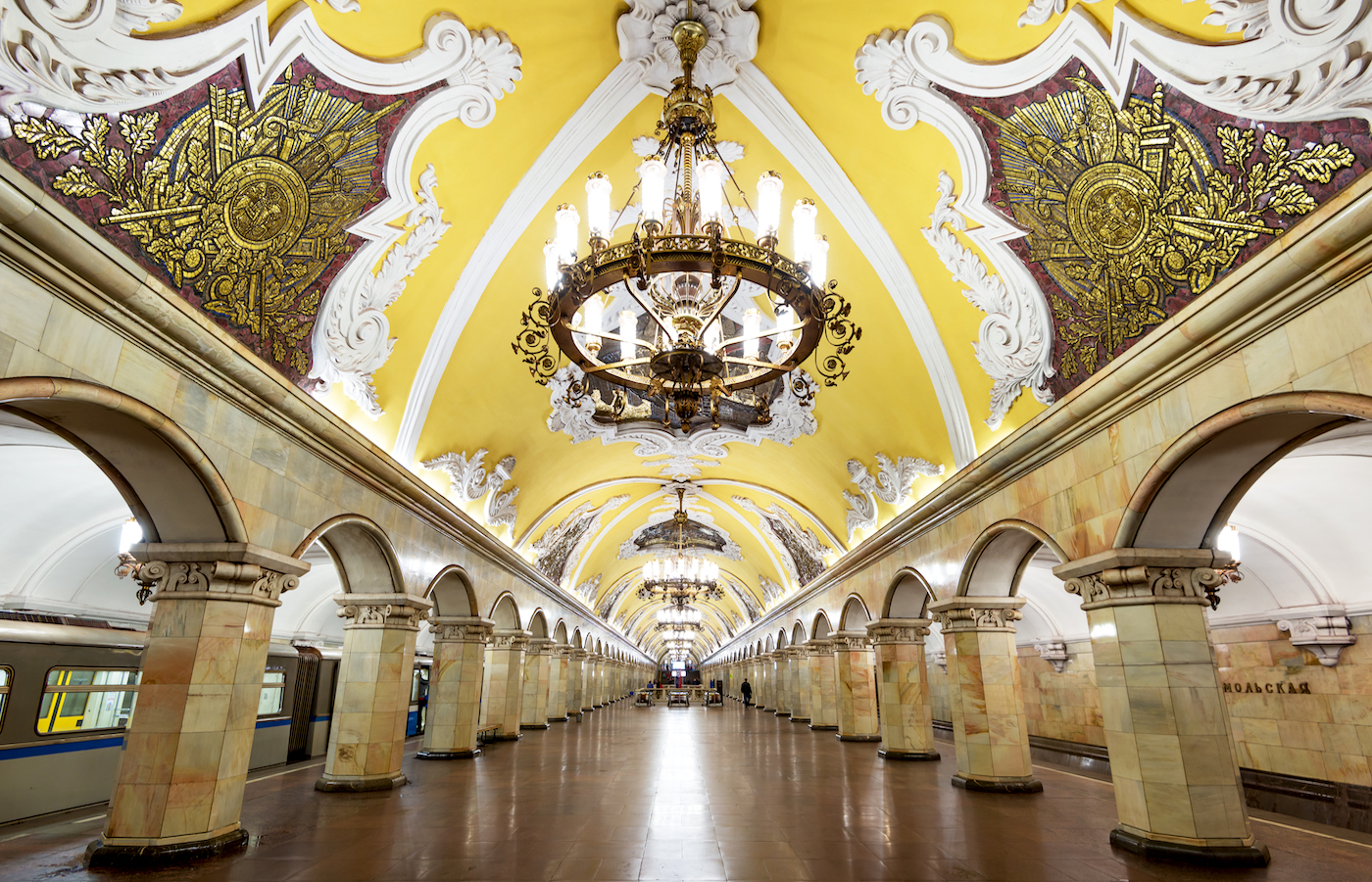 Situated under Komsomolskaya Square, this imposing Moscow Metro station features 68 pillars, marble tiling and a string of ornate chandeliers. Undoubtedly the grandest underground station in Moscow, it opened to the public on 30 January 1952, during the Stalinist era.

Dedicated to Russia’s enduring fight for freedom, the station’s architecture features an array of mounted mosaics, including depictions of medieval conflicts, the Napoleonic invasion and Soviet troops storming the Reichstag during World War Two. 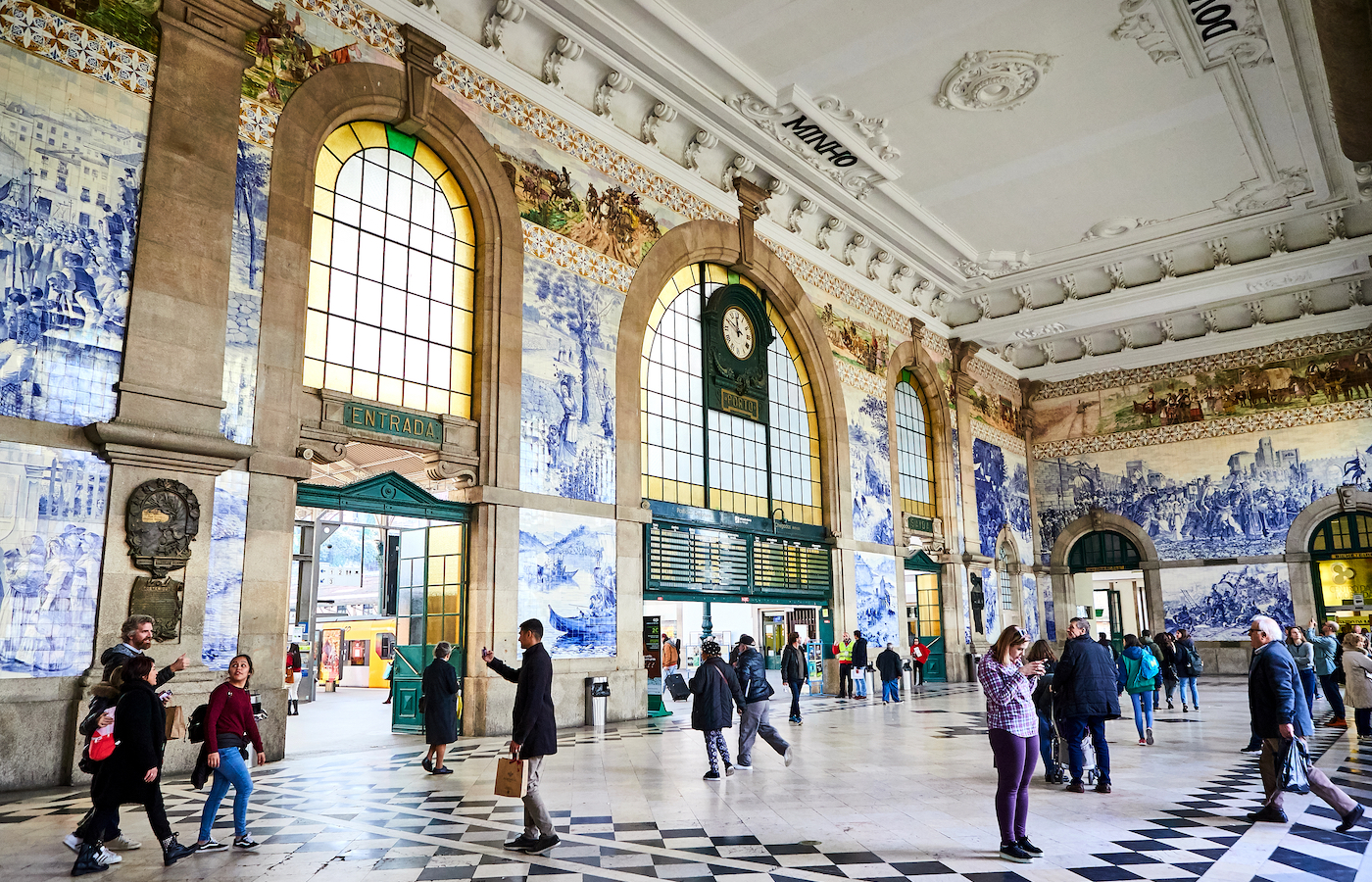 Built in the traditional azulejo style in the early 20th century, Sao Bento station in Porto is adorned with more than 20,000 tiles. The magnificent main lobby, with its blue-and-white tiled walls and ceilings, features portrayals of pivotal moments in Portuguese history, including key rulers, historic battles and important Portuguese ideas and inventions.

Sao Bento is situated in the Historic Centre of Porto, which has been declared both a National Monument of Portugal and a UNESCO World Heritage Site. 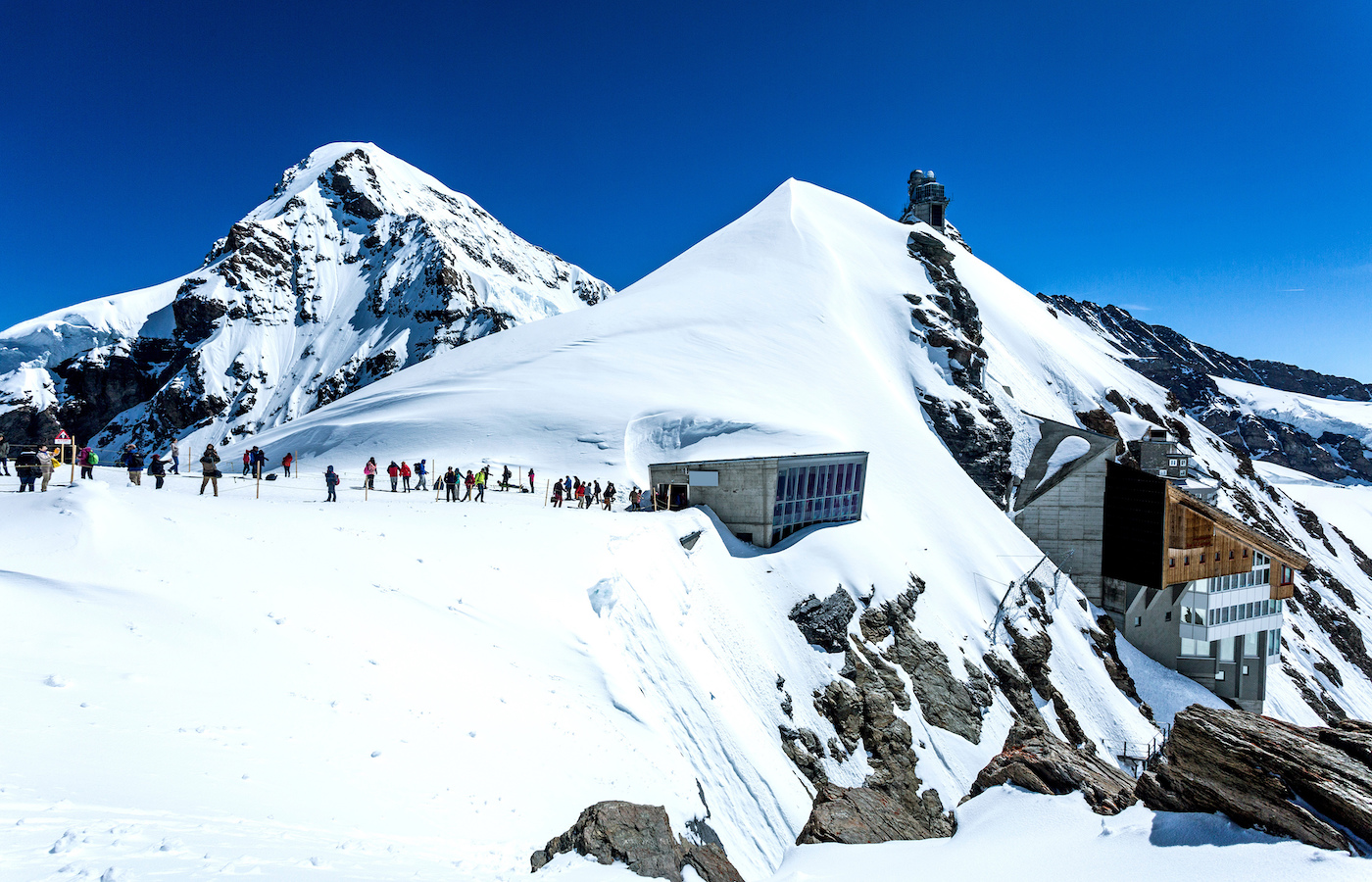 Stunning view of the famous Jungfrau peak, which the Jungfraujoch station serves. At the top of the frame is the Sphinx Observatory. Alps, Switzerland.

Jungfraujoch is the highest railway station in Europe, connected to a high-altitude restaurant complex known as the ‘Top of Europe’ building. Opened in 1912, Jungfraujoch is the terminus of Switzerland’s Jungfrau railway and sits some 11,000 feet above sea level.

The station itself is housed within the mountain itself – trains reach it through a series of alpine tunnels – but visitors can take the elevator up to the Sphinx Observatory for breathtaking views of the surrounding landscape. 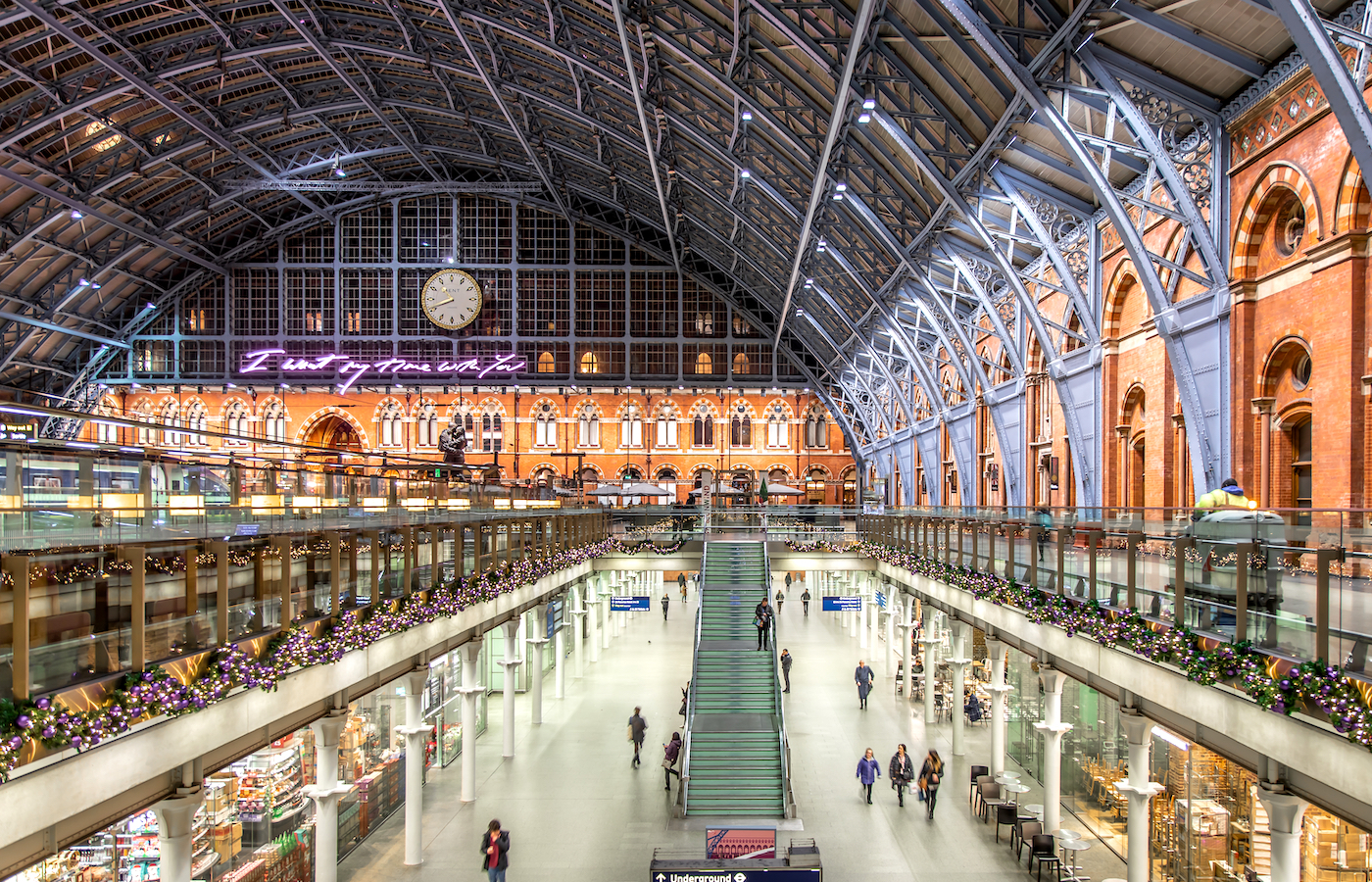 A marvel of Victorian engineering, when London’s St Pancras station opened in 1868 it was the largest indoor space in the world. It towered about the London skyline, constructed with neo-Gothic trimmings and a vast, arched interior concourse.

Not only did St Pancras survive successive bombing raids during the Blitz, but it escaped the city planner’s wrecking ball on numerous occasions, narrowly avoiding demolition in the 1930s and again in the 1960s. While it originally served steam trains of the Midland Railway, St Pancras received a huge revamp in the 21st century, opening as a Euro Star terminus to mainland Europe in 2007. 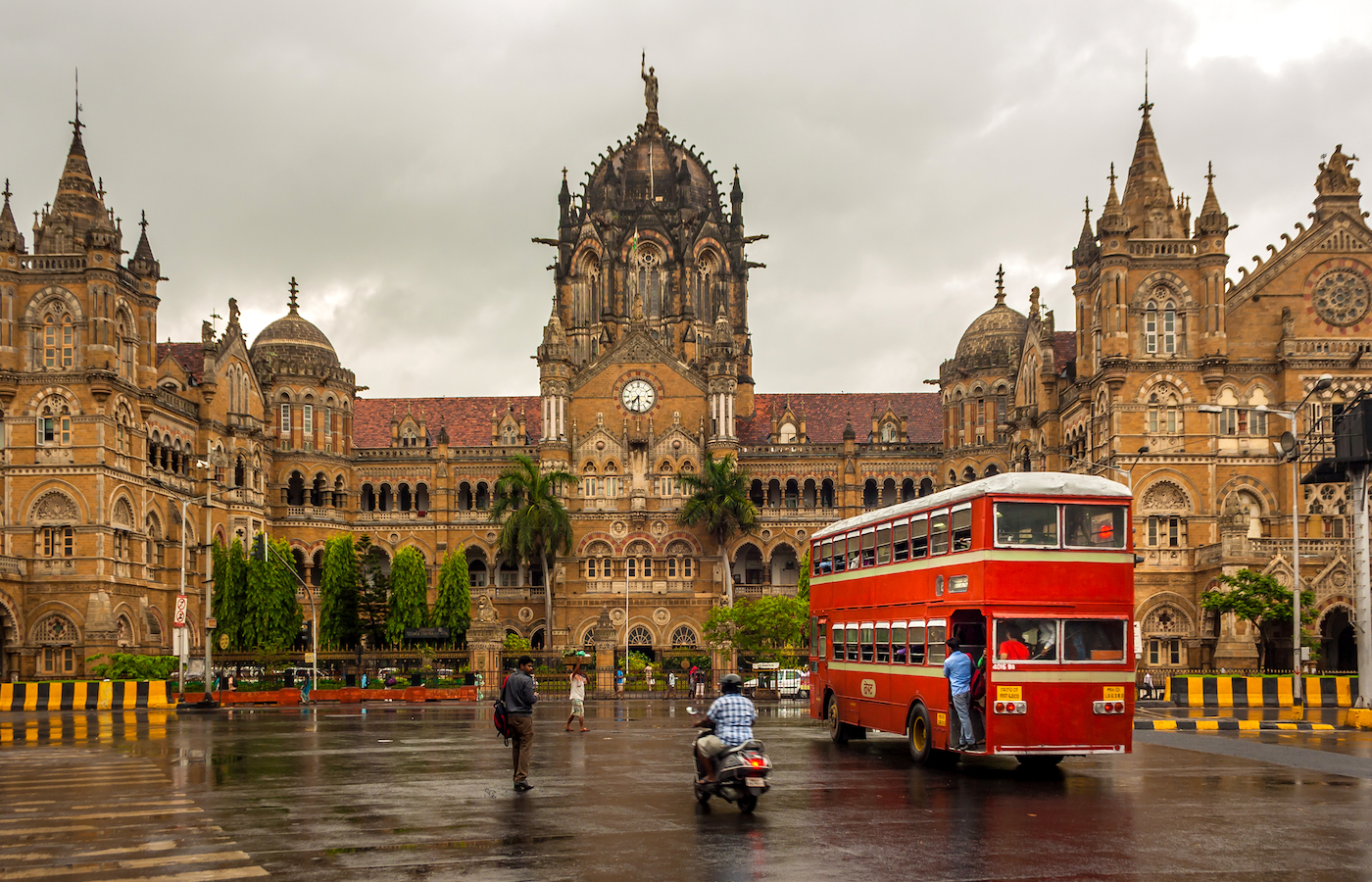 Mumbai’s Chhatrapati Shivaji Terminus is better known by its original name, Victoria Terminus, or simply ‘VT’. That title is a relic of the British colonial era in India, and so is the station itself, which opened in 1887 to coincide with the Golden Jubilee of Queen Victoria, Empress of India.

The station is a towering demonstration of architectural craftsmanship, adorned in a blend of European and Hindu details, constructed from stone and iron, and topped with magnificent domes, statues and arches. Chhatrapati Shivaji Terminus is one of India’s busiest railway stations and was crowned a UNESCO World Heritage Site in 2004. 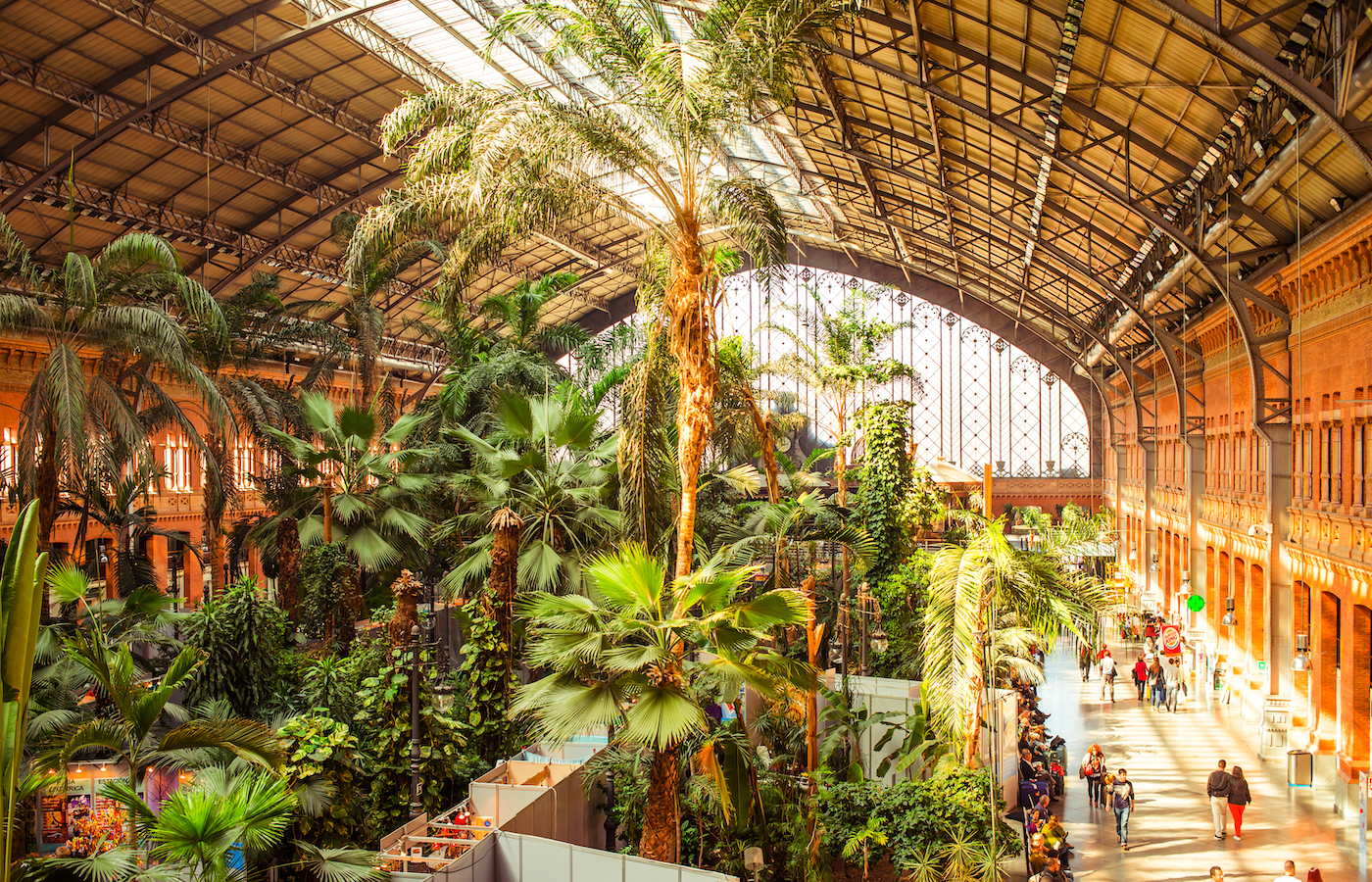 Atocha Station in Madrid is both the largest railway station in the Spanish capital and a giant greenhouse, home to a lush garden of tropical flora and fauna. The garden, situated in the station’s interior plaza, comprises more than 7,000 plants, including Central American cacao plants, African coffee and even endangered species such as the Japanese Ginkgo biloba plant.

The station itself is a bustling city terminus, serving high-speed lines, intercity and international routes and the Madrid Metro.

Antwerpen-Centraal, anglicised to Antwerp Central, opened in 1905 and is widely regarded as the most architecturally beautiful station in Belgium. As well as an ornate stone facade, the railway terminus is home to a towering domed entranceway, magnificent ironwork and interior staircases lined with glistening marble columns and gold crests.

During World War Two, Antwerp Central was subjected to severe bombing raids, some of which warped the building’s roofing, eventually necessitating extensive renovations in the late 20th century. Today, the station is a key hub for Antwerp’s high-speed lines and inter-city connections. 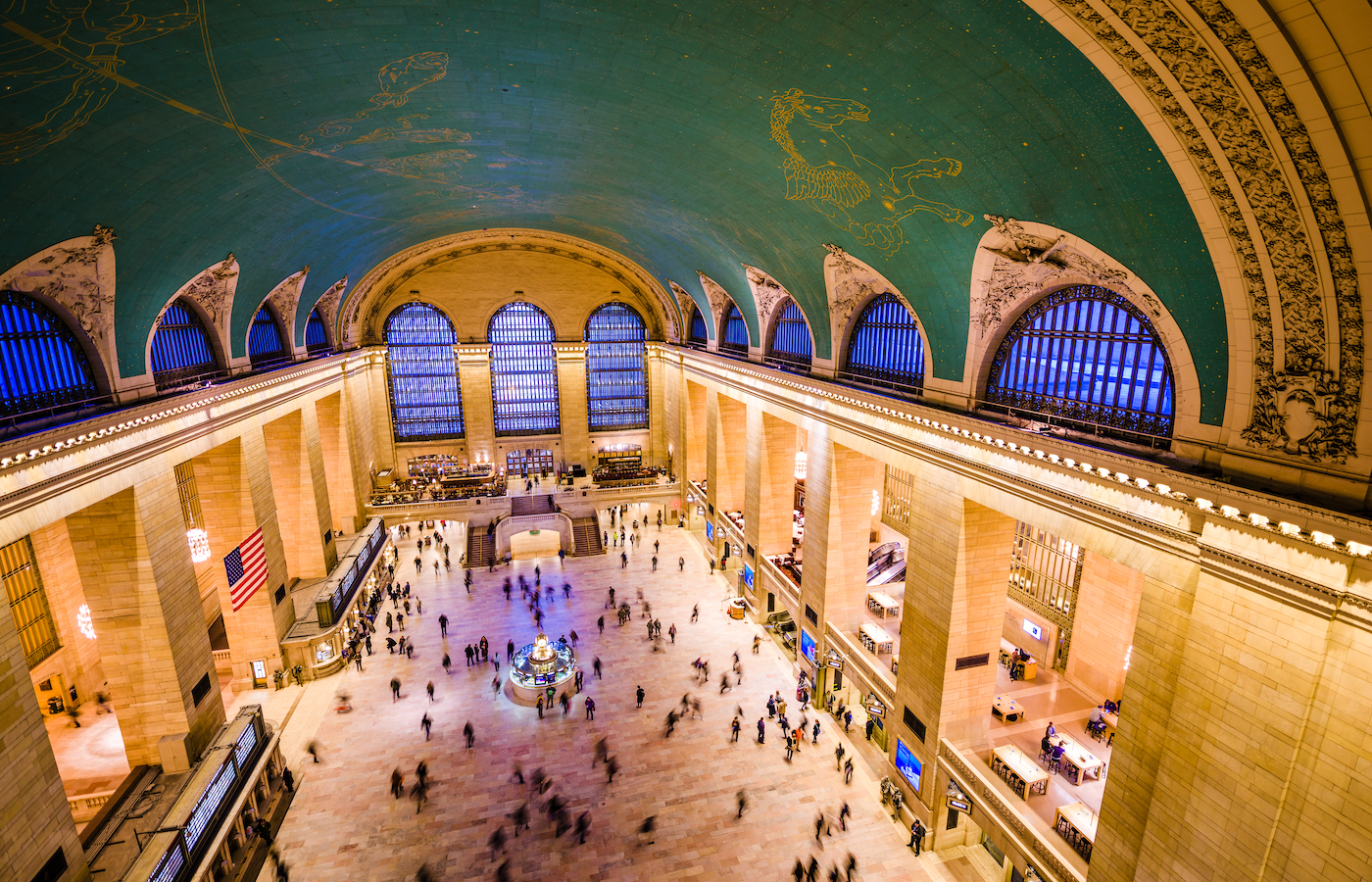 New York City’s Grand Central Terminal is one of the most iconic railway stations in the world, featured in movies as diverse as North by Northwest and Men in Black II and attracting millions of visitors every year.

Renowned for its Beaux-Arts architecture, Grand Central is home to a vast concourse, a world-famous Oyster Bar and a ceiling-top map of the stars and constellations. 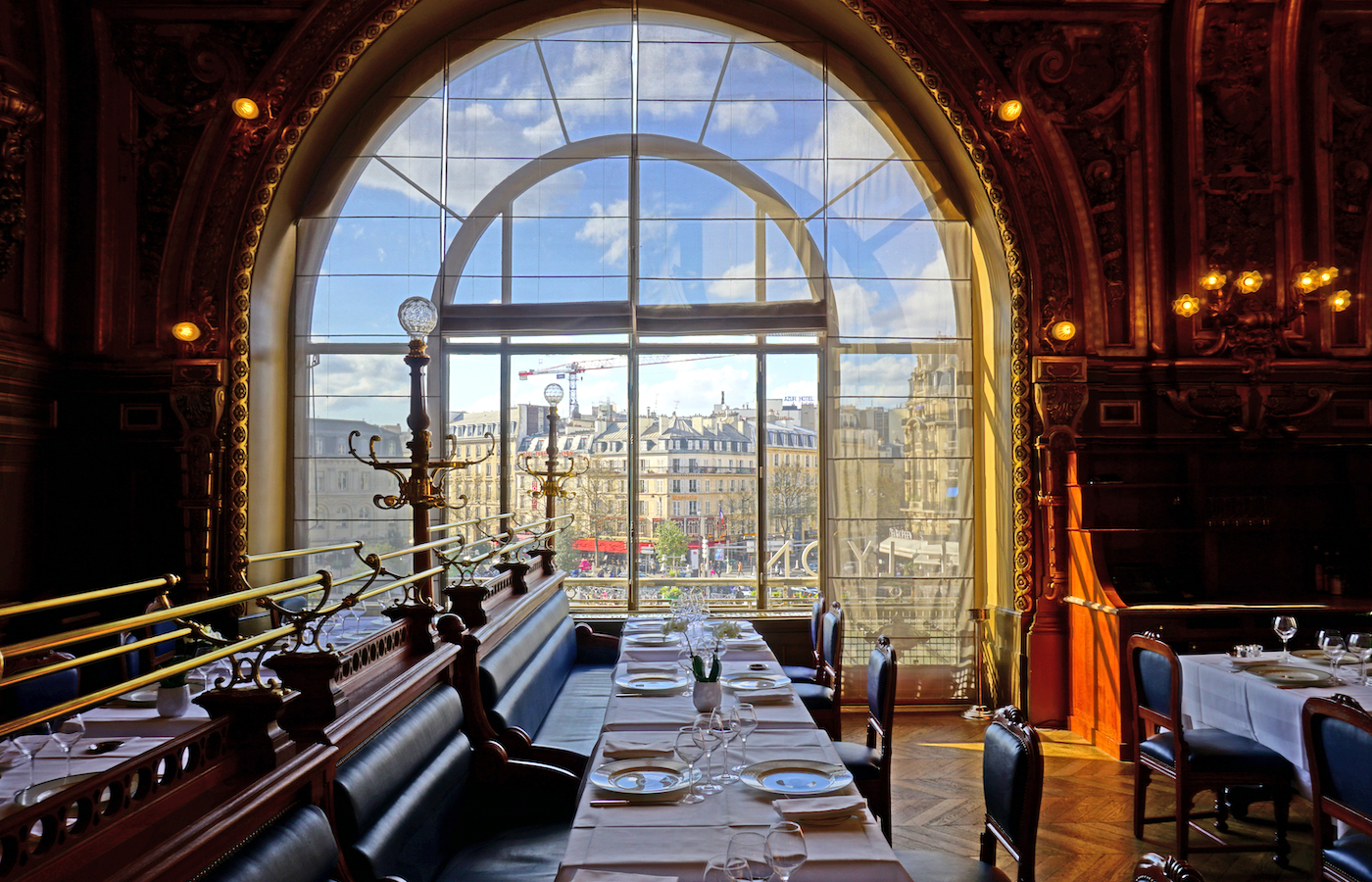 Gare de Lyon is one of Paris’ main train stations, serving high-speed lines to Lyon and the South of France, as well as international routes to Switzerland and Spain. It’s also a truly spectacularly opulent building, constructed as part of the 1900 Paris World Expo.

One of Gare de Lyon’s most cherished attractions is its on-site restaurant, Le Train Bleu. With its ornate golden ceilings, twinkling chandeliers and spectacular views of the station concourse, Le Train Bleu is renowned for its luxury and has attracted stars such as Salvador Dali and Brigitte Bardot. 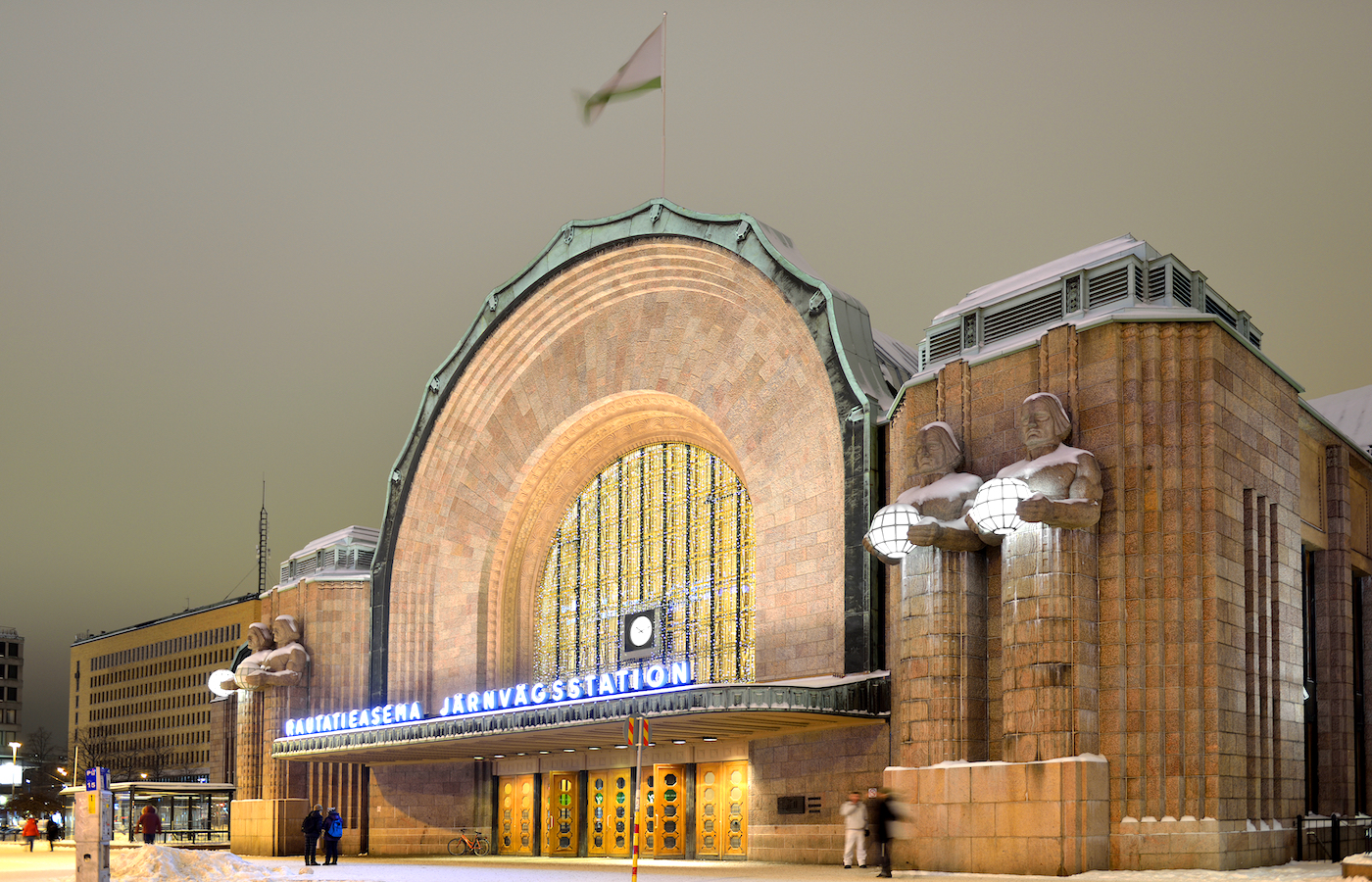 Helsinki Central was designed by architect Eliel Saarinen, whose initial romanticist designs for the structure were redrafted into a more modern style after criticism. Clad in granite, the station exterior is topped with a clock tower and its facades manned by four statues ‘holding’ orb-shaped lamps.

Completed in the early 20th century, the station is a key transport hub, linking the Finnish capital with Russia to the east, the Arctic Circle to the north and city links via the Metro.