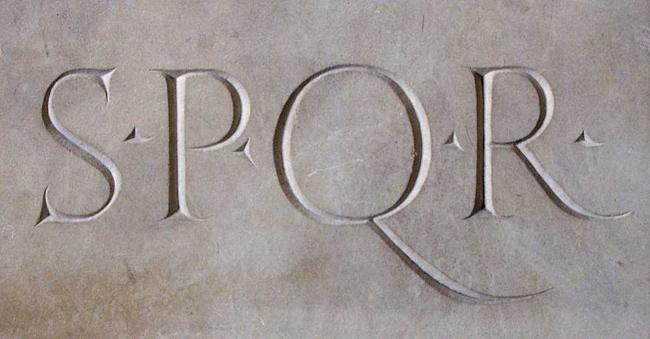 The media often draws easy comparisons between the events of today and ancient Rome and there’s a temptation to think the job of the historian is to match up Rome and its lessons with the world of modern politics.

I think that’s charming, sweet and fun and, in fact, I do it all the time. But I think what’s more important is that the ancient world helps us to think harder about ourselves.

People have said that had we known what a rough time the Romans had in Iraq, we would never have gone there. In fact, there were millions of other reasons not to go to Iraq. We don’t need to know about the Romans’ problems. This kind of thinking can feel like passing the buck.

But I do think that the Romans help us to see some of our problems from the outside, they help us look at things in a different way.

The Romans help us think about the basic ground rules of modern western liberal culture. We might, for instance, ask “What does citizenship mean?”

Romans have a very different view of citizenship from us. We don’t need to follow it, but it gives us another way of looking at things.

Now we might argue with them about that, but actually they do kind of turn the question back on us. Why are we so certain about how we do what we do?

I think history is about challenging certainty. It’s about helping you to see yourself in a different guise – seeing yourself from the outside.

History is about the past, but it’s also about imagining how your life would look from the future.

It teaches us to see what seems so odd about the Romans, but it also helps us see what will seem so odd about us 200 years from now.

If future students study the history of Britain in the 21st century what will they be writing about?

Why Rome? Would this be true if you were studying the Ottoman Empire?

In some ways, it’s true of any period. Just getting outside your box and becoming a kind of anthropologist of other cultures and yourself is always useful.

The reason Rome matters so much is that it isn’t only another culture, it’s also a culture through which our forebears, from the 19th, 18th and 17th centuries, have learned to think.

Rome is a brilliant paradigm for us because it’s both utterly different and it makes us think about real difference. It is also a culture that has shown us how to learn about what liberty is and the what the rights of a citizen are. We are both much better than ancient Rome and the descendants of ancient Rome.

There are bits of Roman literature which are both moving and politically acute – you can’t ignore them. But there is also fun to be had putting that sort of literary insight together with the ordinary day-to-day of Roman life.

There are some bits of ancient literature I’ve read that have made me rethink who I am and re-evaluate my politics. One example is the Roman historian Tacitus ventriloquising a defeated person in South Scotland and looking at what the impact of Roman rule is. He says, “They make a desert and they call it peace.”

Has there ever been a more pithy summation of what military conquest is?

Tacitus would be smiling in his grave because he showed us what the underbelly of warfare and peace-making is.

I first read that when I was at school and I remember suddenly thinking, “These Romans are speaking to me!”

There are bits of Roman literature which are both moving and politically acute – you can’t ignore them. But there is also fun to be had putting that sort of literary insight together with the ordinary day-to-day of Roman life.

It’s important to think about what ordinary life was like.