Why Was the Nazi-Soviet Pact Signed in August 1939? | History Hit 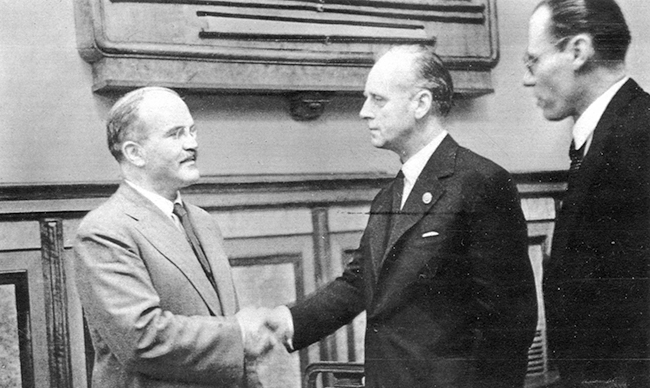 Nazi Germany and the Soviet Union had two very different reasons for entering into the Nazi-Soviet pact. It wasn’t a natural alignment between the two. They were political enemies, geostrategic enemies, and had spent most of the 1930s insulting one another.

For Adolf Hitler, the fundamental problem was that he had painted himself into a strategic corner by the summer of 1939. He had been sabre-rattling against most of his neighbours, and had achieved most of his ambitions territorially.

After the Munich Agreement of 1938, followed by the invasion of Bohemia and Moravia, as well as the rest of Czechoslovakia in March of 1939, he had provoked an end to appeasement and had come up against a much more robust response from the western powers.

That response guaranteed Poland as well as Romania and seemed to hem him in, preventing any further expansion.

By making a pact with the Soviet Union’s Joseph Stalin, Hitler was effectively thinking outside the box.

He sought a way out of this impasse that the western powers imposed upon him. From Hitler’s perspective, it was never a love match. As far as Hitler was concerned, it was a temporary expedient. 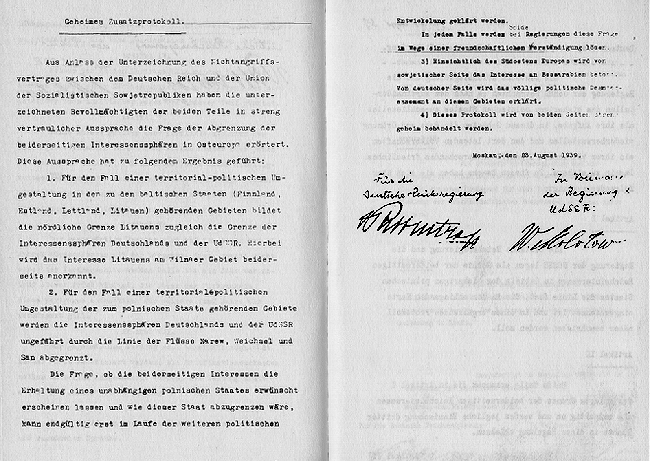 The Nazi-Soviet Pact was signed by the German and Soviet foreign ministers, Joachim von Ribbentrop and Vyacheslav Molotov, in August 1939.

It was an expedient that, at an undefined point in the future, would be torn up, following which the Soviet Union would be dealt with – the enmity between the Soviets and the Nazis had not gone away.

Stalin’s motives were much more opaque and have been routinely misunderstood, particularly in the West. Stalin was also a child of the Munich conference of the year before. He naturally distrusted the West, but after Munich there was a much greater distrust.

The Nazi-Soviet pact was an anti-western arrangement from Stalin’s perspective. We forget, perhaps, that the Soviet Union viewed the entire outside world as hostile.

This was true in the 1920s, often for good reason, but the Soviets continued to perceive hostility into the 1930s. They viewed the capitalist democratic west as a greater threat than the fascists.

The Soviet belief was that the fascists were further down the road to their inevitable scientific demise than the imperialists were, which is an idea that comes from a Marxist view of the world. To the Marxist-Leninist mind, the capitalists, or the imperialists, as they considered the British and the French, were as dangerous as the fascists, if not more so.

The Soviets certainly didn’t view the western powers with any favouritism or brotherly love. By arranging themselves with the Nazis when the opportunity arose, the Soviets extracted a very favourable economic agreement and Stalin got to revise his western frontiers.

Stalin took half of Poland, which was one of his main irredenta and a primary territorial demand, and also hoped to see Hitler attack the western powers, which, from the Soviet leader’s perspective, was a win-win.

Strategically, it was a collision of interests. This is how we’ve forgotten where the Nazi-Soviet pact came from.

It is generally seen in history textbooks and so on as the last chess move before the outbreak of war in 1939. But we forget that it was actually a relationship between the two powers that lasted for almost two years.

The idea of the pact as a relationship has been very much forgotten. But it’s arguably the great forgotten power relationship of World War Two.

It is largely forgotten by the West, and part of the reason for this collective amnesia is because it is morally embarrassing.

Stalin was a man who the West ended up allied to in 1941, one of the key players in the Grand Alliance, and the man whose forces were largely responsible for defeating Hitler in Europe. But prior to 1941, he was on the other side, and he was even keen to celebrate all of Hitler’s victories.

If Britain had fallen in 1940, Stalin would have most certainly sent a congratulatory telegram to Berlin. 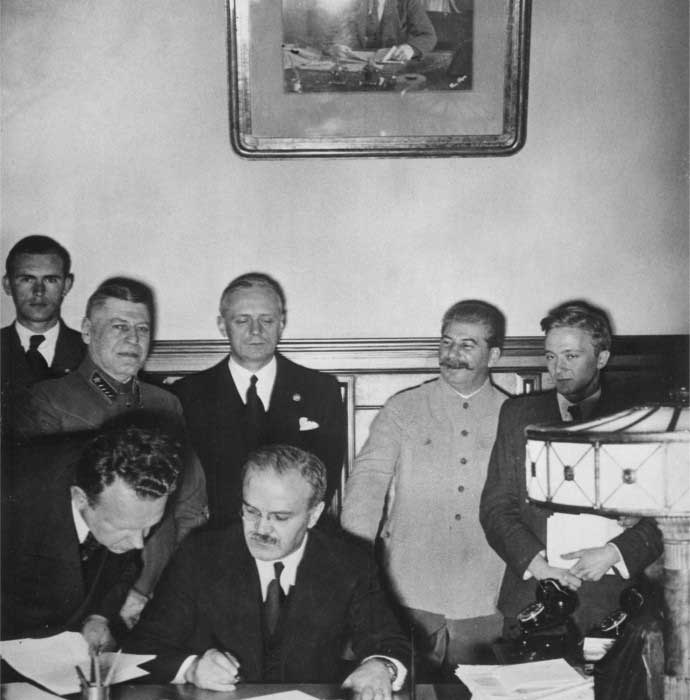 What did they hope to gain?

Both men harboured grand ambitions, and they were both at the head of revolutionary regimes. Stalin’s ambition was essentially to forge a path for the communist world in the conflict that he saw was about to erupt between Germany and the western powers.

His ideal scenario, and he says as much in his speech in 1939, was that Germany and the western powers would fight each other to a standstill, at which point the Red Army could march all the way to the Atlantic coast.

The then Soviet foreign minister, Vyacheslav Molotov, elaborated on this ideal scenario in a speech to a fellow communists in 1940, where he depicted a grand conflict between the proletarians and the bourgeoisie in western Europe.

At which point, when everyone had exhausted each other and bled each other white, the Red Army would ride to the aid of the proletarians, defeat the bourgeoisie and there would be a grand battle somewhere on the Rhine.

That was the extent of Soviet ambition: they saw World War Two as a sort of precursor to a widespread Soviet revolution for all of Europe. That was how they foresaw it.

Hitler’s ambitions weren’t much less than that, in terms of aggression and zeal, but he was much more of a gambler. He was much more of a person who preferred to exploit situations as they came up, and you could see this right the way through the 1930s. 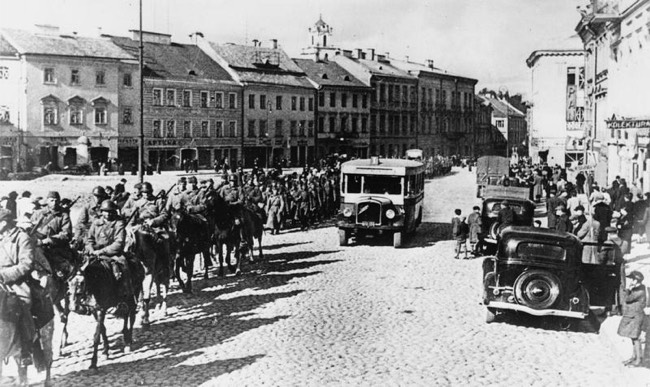 Hitler was thinking much less in broad long-term strategic terms, and he preferred to deal with problems as they arose. In 1939, he had the problem of Poland. He dealt with that by allying himself, however temporarily, with his arch enemy.

That enmity didn’t go away, but he was willing for the sake of two years to exploit it and see what happened.

The old idea of Lebensraum that the Nazis had, where some form of eastward expansion of Nazi Germany was inevitable, was going to happen at some point. But the when and the where and the how was yet to be written in Hitler’s mind.

Later on in 1940 he was told that the Soviets had occupied Bessarabia, a northeastern province of Romania that was promised to them under the Nazi-Soviet pact.

It is interesting, for example, that when Hitler heard about this occupation, he said, “Well, who authorised that? … I didn’t authorise that”. And then his foreign minister, Joachim von Ribbentrop, showed him the document where he had authorised it as part of the Nazi-Soviet Pact.

It is pretty clear that Hitler was not really thinking long-term in 1939, and that the Nazi-Soviet Pact was instead a short-term solution to an immediate problem. 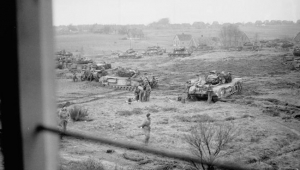 How Close Would German and British Tanks Get in World War Two? 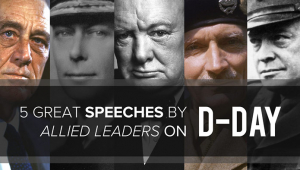 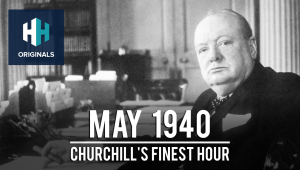 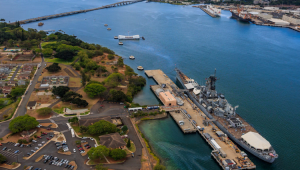 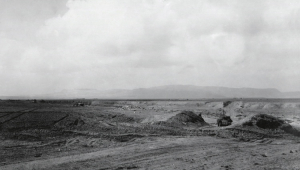