Hong Kong has rarely been out of the news recently. Thousands of protesters have taken to the city’s streets (initially) in opposition to the Hong Kong government’s introduction of a highly-controversial extradition bill earlier this year. Since then the protests have only grown in size as they attempt to preserve their city’s autonomy, as agreed under the ‘One country, two systems’ policy.

The protests have visible roots in Hong Kong’s recent history. Below is a brief timeline of Hong Kong’s history to help explain the background to the ongoing protests, with a particular focus on the past 200 years.

Hong Kong Island became a remote part of the Chinese Empire during the rule of the first Ts’in/Qin emperors. It remained part of various Chinese dynasties for the next 2,000 years.

A large number of Chinese refugees settled in the Hong Kong area, after they were driven from their homes during the Mongol conquest of the Song dynasty. These clans started to build walled villages to protect them from external threats.

The 13th century influx in Hong Kong’s population was a significant moment during the area’s colonisation by Chinese peasants – a colonisation that occurred more than 1,000 years after the area had technically become part of the Chinese Empire.

4 September: The First Opium War between the British East India Company and the Qing Dynasty erupted. 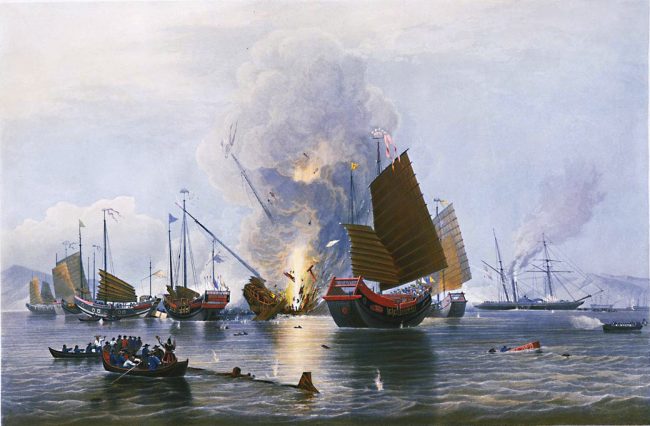 20 January – The terms of the Convention of Chuenpi – agreed between the British Plenipotentiary Charles Elliot and Chinese Imperial Commissioner Qishan – were published. The terms included the secession of Hong Kong island and its harbour to Britain. Both the British and the Chinese governments rejected the terms.

26 January – Gordon Bremer, the Commander-in-chief of the British forces during the First Opium War, took formal possession of Hong Kong when he hoisted the Union Jack on the island. The place where he hoisted the flag became known as ‘possession point’.

29 August – the Treaty of Nanking is signed. The Chinese Qing dynasty officially ceded Hong Kong Island to Britain “in perpetuity”, although British and colonial settlers had already started arriving on the island since the previous year.

Oil painting depicting the signing of the Treaty of Nanking.

24 October: At the First Convention of Peking, after the Second Opium War, the Qing dynasty formally ceded a significant portion of the Kowloon Peninsula to the British. The main purpose of the land acquisition was military: so that the Peninsula could serve as a buffer zone if the island was ever the object of attack. British territory went as far north as Boundary Street.

The Qing dynasty also ceded Stonecutters Island to the British.

October: Violence erupted in Hong Kong between the Chinese grass roots of the city and colonial forces. It is unclear how big an element Chinese nationalism played in the 1884 riots.

1 July: The Second Convention of Peking was signed, giving Britain a 99 year lease on what was called ‘the New Territories’: the mainland area of the Kowloon Peninsula north of the Boundary Street as well as the Outlying islands. Kowloon Walled City was excluded from the treaty terms.

April: Winston Churchill said that there was not the slightest chance of being able to defend Hong Kong should it be attacked by Japan, though he continued to authorise the sending of reinforcements to defend the isolated outpost.

Monday 8 December: Japan officially declared war on the United States and the British Empire. They commenced attacks on Malaya, Singapore, the Philippines and Hong Kong.

Kai Tak, Hong Kong’s airfield, was attacked at 0800 hours. All but one of the five obsolete RAF aircraft were destroyed on the ground, confirming Japanese uncontested air superiority.

Saturday 13 December: British and Allied troops abandoned the Kowloon Peninsula and retreated to the island.

Sir Mark Young, the Governor of Hong Kong, refused the Japanese request that they surrender. 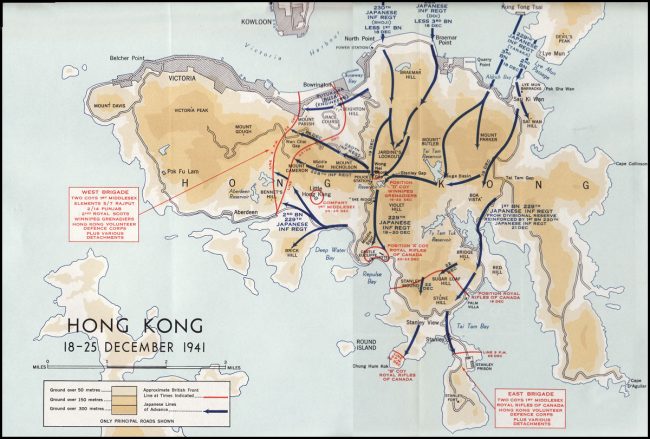 Sir Mark Young refused the Japanese demand that they surrender a second time.

Thursday 25 December: Major-General Maltby is told the longest the front-line could hold any longer was one hour. He advised Sir Mark Young to surrender and that further fighting was hopeless.

January: The British officially abolished the ‘unequal treaties’ agreed between China and western powers during the 19th century to promote Sino-British cooperation during World War Two. Britain retained its claim to Hong Kong however.

1 October: Mao Zedong proclaimed the founding of the People’s Republic of China. To escape the regime large numbers of capitalist-leaning Chinese citizens arrived in Hong Kong. 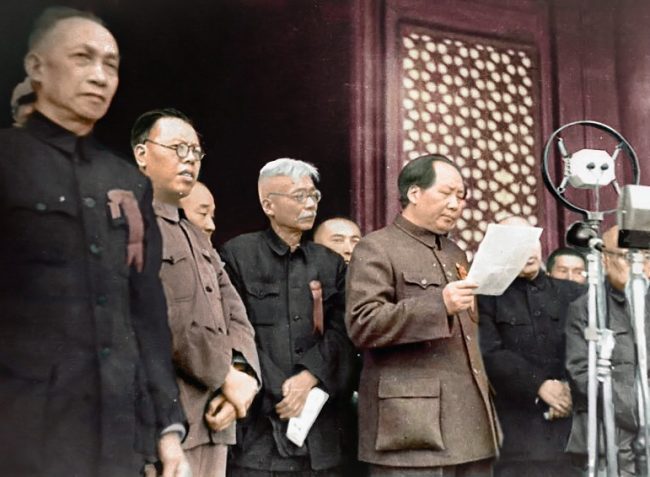 May: The 1967 Hong Kong leftist riots began between pro-communists and the Hong-Kong government. Most of the Hong Kong populace supported the government.

July: The riots reached their height. Police were granted special powers to quell the unrest and they made more and more arrests. The pro-communist protesters responded by planting bombs throughout the city, leading to civilian casualties. Many protesters were killed by police during the riots; several police officers were also killed – murdered either by bombs or leftist militia groups.

20 August: Wong Yee-man, an 8 year old girl, is killed, along with her younger brother, by a leftist homemade bomb wrapped like a gift at Ching Wah Street, North Point.

24 August: Anti-leftist radio commentator Lam Bun was assassinated, along with his cousin, by a leftist group.

A suggestion was touted in China that they use the riots as a pretext to occupy Hong Kong, but the invasion plan was vetoed by Enlai. 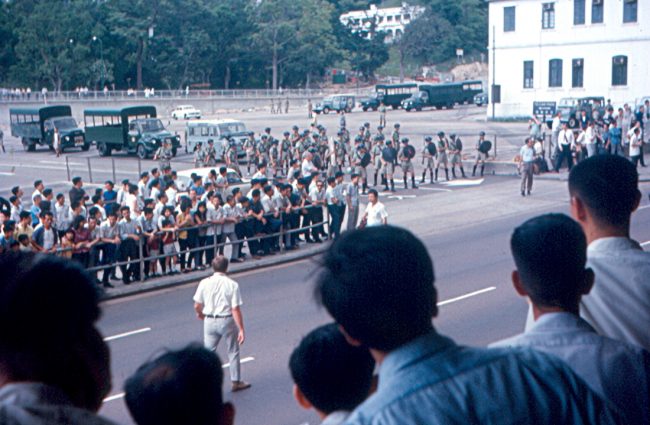 The British had realised that they could not viably sustain such a small area as a state, especially as the main source of Hong Kong’s water supply came from the mainland.

China declared that following the expiry of the British lease, Hong Kong would become a Special Administrative Region under the ‘One country, two systems’ principle, under which the island retained a high degree of autonomy.

14 January: The British and Chinese governments agreed to tear down Kowloon Walled City.

1 July: The British lease over Hong Kong Island and the Kowloon Peninsula ended at 00:00 Hong Kong time. The United Kingdom handed Hong Kong island and its surrounding territory back to the People’s Republic of China.

“I have relinquished the administration of this government. God Save The Queen. Patten.”

The decision provoked widespread protest. Many saw it as the start of mainland Chinese attempts to erode the ‘One country, two systems’ principle. The protests failed to achieve any changes to the Standing Committee of the National People’s Congress decision.

February: The Hong Kong government introduced an extradition bill that would allow people accused of crimes to be sent to mainland China, sparking great unrest among many who believed this was the next step in the erosion of Hong Kong’s autonomy.

15 June – present: The protests have continued as frustration mounts.

On 1 July 2019 – the 22nd anniversary since Britain relinquished control of the island – protesters stormed the government headquarters and vandalised the building, spraying graffiti and raising the former colonial flag. 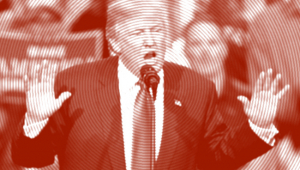 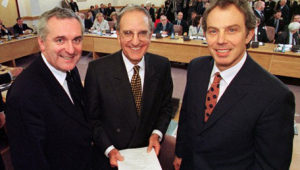 How Did the Good Friday Agreement Succeed in Forging Peace in Ireland? 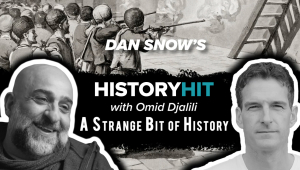 A Strange Bit of History 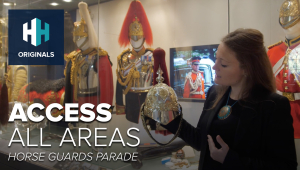 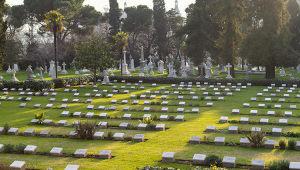 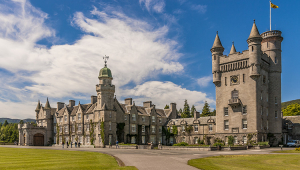