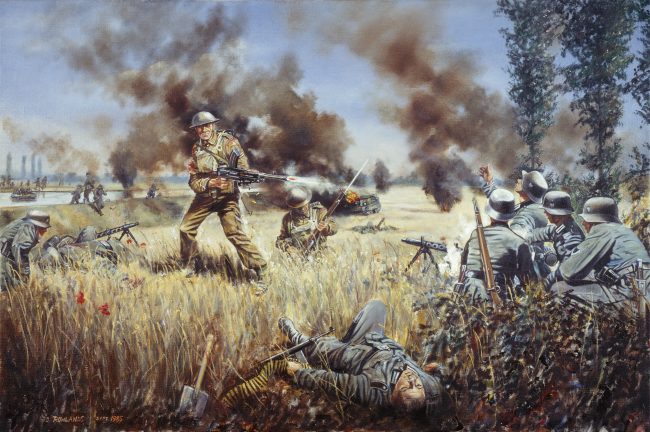 On 1 September 1939, Germany invaded Poland. That day, Britain mobilised for war, 3,000 men of the British Army Reserve being recalled to the colours.

Amongst them were Grenadiers Bert Smith and Arthur Rice, both old soldiers, who re-joined the 3rd Battalion at Barossa Barracks, Aldershot. Lieutenant Edward Ford, a Grenadier subaltern, remarked that,

‘There were no better soldiers than the reservists who returned to us’.

The 3rd Battalion, together with the 2nd Coldstream and 2nd Hampshires, was a part of the 1st Guards Brigade, 1st Infantry Division, which joined Lord Gort VC’s British Expeditionary Force – which substantially comprised reservists and territorials.

Harry Nicholls was born on 21 April 1915, to Jack and Florence Nicholls in Hope Street, a tough working-class area, in Nottingham. At 14, Harry left school, working as a labourer before becoming a Grenadier.

At 5 feet and 11 inches tall, weighing in at 14 stone, since schooldays Harry had been a boxer: in 1938, he won the Army & Navy Heavyweight and Imperial Forces Championships.

According to Guardsman Gil Follett:

‘Harry Nicholls appeared invincible. He had a totally positive mindset’.

His 3 Company Commander, Major LS Starkey, wrote that ‘As a Guardsman, he was first class’.

On 19 September 1940, Lance Corporal Harry Nicholls and 1st Guards Brigade sailed for Cherbourg, joining the BEF in France. The Brigade would spend the winter of 1939/40 in hastily prepared defensive positions along the Franco-Belgian border, the Belgian King having refused the BEF entry (in attempt to remain neutral).

At 0435 hrs on 10 May 1940, however, Hitler attacked the west, German troops crossing the Dutch, Belgian and Luxembourg borders. An hour later, the Belgians pleaded for help.

Anticipating that the Germans would replicate 1914 and advance through Belgium from the north, the Allies executed Plan ‘D’, moving eastwards to the River Dyle.

For the BEF, this meant marching forward 60 miles across unreconnoitered ground, with no supply dumps, prepared positions or clear command arrangements with the Belgians. As Guardsman Bert Middleton remembered. ‘We had to walk it’.

Worse, the actual Schwerpunkt (point of main effort) involving the majority of German armour had been cleverly disguised. Instead of replicating 1914, Panzergruppe Von Kleist successfully negotiated the supposedly ‘impassable’ Ardennes, racing for the Channel coast and completely outflanking the Maginot and Dyle Lines.

Almost immediately, therefore, the BEF was placed in grave danger of envelopment. By 16 May 1940, it was clear that a prolonged defence along the Dyle was impractical. Consequently, a withdrawal westwards, to the river Escaut, was ordered. Guardsman Arthur Rice:

‘We hadn’t seen the bloody Germans, so couldn’t understand why we had to retreat before fighting a battle. We thought we could beat them. We all did’.

The 3rd Grenadiers provided a rear-guard, eventually withdrawing themselves, bridges being blown in their wake. In the Foret de Soignes, an officer of 1st Division HQ, checking troops through, was heard to remark ‘These must be the Guards!’ – as the Battalion marched through the woods, all in step.

The Grenadiers marched on, in fact, south of Brussels, over the Charleroi Canal and into 1st Guards Brigade reserve at Zobbroek. On 17 May 1940, Stukas attacked the resting Guardsmen, fortunately without casualties.

The Battalion was then ordered to fall back again, this time behind the Dendre. From the Dendre, the BEF withdrew to he Escaut Line, and dug in, division alongside division.

On Lord Gort’s right was the French 1st Army, Belgians to the left. At last, the BEF was in a position and ready to fight a major defensive battle. As Guardsman Follett recalled:

‘At the Escaut we were told to “fight to the last man and last round”.’

After dark on 20 May 1940, the 3rd Grenadiers occupied positions along the River Escaut in front of the hamlet of Esquelmes, a mile south of Pecq. To the Grenadiers’ left was the 2nd Coldstream.

The main Pont-à-Chin road ran parallel with the river, half a mile west. At the village of Bailleul, a further half mile west beyond the road, Major Starkey’s 3 Company – including Lance Corporal Harry Nicholls – was held in reserve together with Lieutenant Reynell-Pack’s Carrier Platoon.

Along the riverbank, Major Alston-Roberts-West’s 4 Company – including Guardsmen Smith and Rice – held the Grenadiers’ left flank. That night, Allied artillery bombarded German positions on the east bank, the enemy guns responding in kind.

Thus the scene was set for derring-do on Tuesday 21 May 1940 – when IV Armee Korps was to mount an assault river crossing and seize the west bank.

‘We were in trees by the river, eating breakfast when suddenly there were explosions all around us. I took cover with Guardsman Chapman and we were hit by a mortar round – all that was left of him was his pack’.

‘Suddenly all hell broke loose, the enemy opening up on 4 Company with artillery, mortar and machine-gun fire. Our left flank took a real battering’.

Then, the Germans appeared out of the mist and confusion in rubber boats. The German commander, Hauptmann Lothar Ambrosius of the II Battalion of Infanterie-Regiment 12, wrote that

‘The river crossing was very difficult… the English were firing at us from all directions…’.

Guardsman Rice was, according to Les, firing with his Bren ‘as if in defiance of the whole German army’. A mortar round then blasted Arthur through a bush, fearfully wounding him.

Les, a medic, grabbed Arthur, who was still alive – just – and dragged him to the temporary safety of Company HQ. Guardsman Smith suffered a head wound and was captured in hand-to-hand fighting on the riverbank, as 4 Company was overrun.

Major West ordered a withdrawal. The Grenadiers left the riverbank, entering the cornfields between river and main road.

Meanwhile, Hauptmann Ambrosius’s men continued pouring across the river, working their way inland along a line of poplars bordering the main cornfield, driving a field-grey wedge between the Grenadiers and Coldstream.

Major Allan Adair, commanding the 3rd Grenadiers, ordered Captain Starkey to advance with 3 Company, link up with the Coldstream and push the enemy back across the Escaut.

Guardsman Percy Nash was with his friend Lance Corporal Harry Nicholls, carrying a bag of magazines for the boxer’s Bren:

‘Whilst forming up, Harry was hit in the arm by shrapnel, but he was determined to grab this opportunity for action. So was I’.

At 1130 hrs, supported by Lieutenant Reynell-Pack’s three Carriers, Starkey’s men advanced towards ‘Poplar Ridge’. Initial progress was good, but the Grenadier mortars ceased firing too early. According to the official account:

‘The attack went in with great dash, but the men were mown down by hidden machine-guns’.

Reynell-Pack then charged his Carriers, but, bouncing at speed over the rough ground, gunners were unable to bring their sights to bear.

All three tracked vehicles were destroyed, and all personnel killed – Reynell-Pack himself just fifty yards from his objective. Guardsman Bill Lewcock:

‘Our numbers were dwindling rapidly… unable to proceed due to mounting losses… it was then that Harry Nicholls dashed forward’.

‘It was desperate. These German machine-guns were unbelievable. Harry just turned to me and said “Come on Nash, follow me!”

So I did. He had the Bren, firing from the hip, and I my rifle. I fed Harry ammunition, and we attacked by means of short rushes forward.

Harry was hit several times and hurt bad, but he wouldn’t stop. He just kept shouting “Come on Nash, they can’t get me!”

Once the enemy guns were out of action we fired on Germans crossing the river. We sank two boats, then Harry turned the Bren on Germans both sides of the river. By then we were drawing a lot of small arms fire ourselves’.

‘This attack caused panic amongst my soldiers of 5 and 6 Kompanies, many of which fled and jumped in the river to escape… After this attack we had no more machine-guns operable and little ammunition’.

Before Nicholls and Nash dashed forward, Ambrosius was seriously threatening the 1st Guards Brigade’s cohesion and position. Afterwards, the German commander had no option but to withdraw, the momentum of assault and initiative wrested from him.

Nicholls, though, grievously wounded and unconscious, was left by Guardsman Nash in the cornfield, believing his friend to be dead.

After the Germans withdrew back to the east bank, 1st Guards Brigade remained in positions along the main road and did not re-occupy the riverbank.

Forty-seven Grenadiers had been killed, including five officers, amongst them the Duke of Northumberland. A further 180 Guardsmen were either missing or wounded. That night, both sides sent out reconnaissance patrols, the Germans finding Nicholls still alive and taking him into custody.

Back on the east bank, it was Guardsman Smith who kept the boxer alive that night, and the following day carried him to a German field hospital. Both men were reported missing, their families only receiving confirmation that they were alive and captives several months later.

By that time, unbeknown to Harry himself, he had been ‘posthumously’ awarded the Victoria Cross for his ‘signal act of valour’.

That, however, was far from the story’s end: in September 1940, Mrs Nicholls was notified by the Red Cross that her husband was alive. Overjoyed, Connie returned the medal for safe-keeping and collection by Harry personally after the war.

Following 5 long years as a prisoner in Stalag XXB, after repatriation, Lance Corporal Harry Nicholls attended an investiture at Buckingham Palace on 22 June 1945 – marking the only occasion in the history of the VC that the medal has been presented twice.

On 21 May 1940, Company Sergeant Major Gristock of the Royal Norfolks also received a VC for his bravery on the Escaut. Five VCs in total were awarded to the BEF, 2 of them to Guardsmen.

After the battle along the Escaut, the BEF was unable to consolidate the victory – for that what it was – owing to the situation with Belgian and French forces deteriorating further still. Consequently that night the force withdrew again, the unthinkable decision soon reached to evacuate via Dunkirk.

A reevaluation of the BEF

The fact is, contrary to popular perception and myth, that the BEF fought bravely when it had the opportunity to do so – and fought well. This is especially commendable considering how many men were reservists and territorials.

For II/IR12, the action was the German battalion’s first major encounter since the Polish campaign; by 8 May 1945, the unit had lost 6,000 men killed in action, most on the Eastern Front.

Thanks to Guardsman Les Drinkwater, the badly wounded Guardsman Arthur Rice survived, being evacuated from Dunkirk on the last ship away from the harbour mole; Guardsman Nash likewise came home via Dunkirk – never receiving any recognition for his essential part in the VC-winning action.

Harry and Connie Nicholls divorced after the war, Harry re-marrying and moving to Leeds. Badly affected by his ordeal and wounds, he suffered dizzy spells and was ultimately unable to work.

On 11 September 1975, aged sixty, Harry Nicholls VC died. The cause of death being

‘Poisoning by the barbiturate Deconol. Self-administered but insufficient evidence to show whether taken by accident or design’.

The Coroner recorded an ‘Open Verdict’.

The foregoing is adapted from ‘Guards VC: Blitzkrieg 1940’ by Dilip Sarkar (Ramrod Publications, 1999 & Victory Books 2005). Although out of print, copies are readily obtainable online from used book sellers.

Dilip Sarkar MBE is an internationally recognised expert in the Second World War. For more information on Dilip Sarkar’s work and publications, please visit his website. 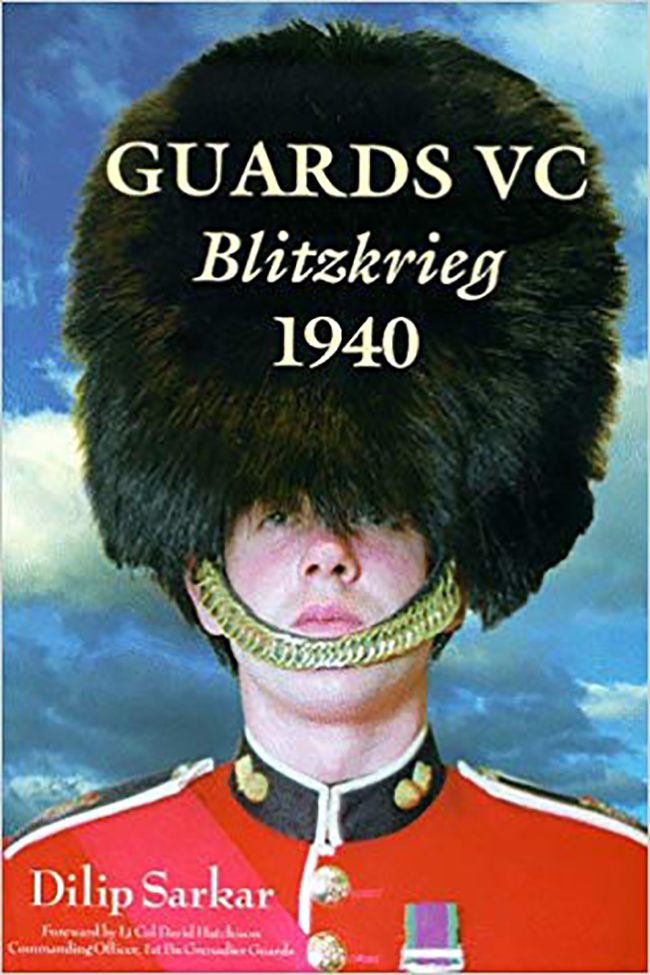 Featured Image Credit: David Rowlands’ artistic impression of Harry Nicholls and Percy Nash in action, 21 May 1940. With thanks to David Rowlands.