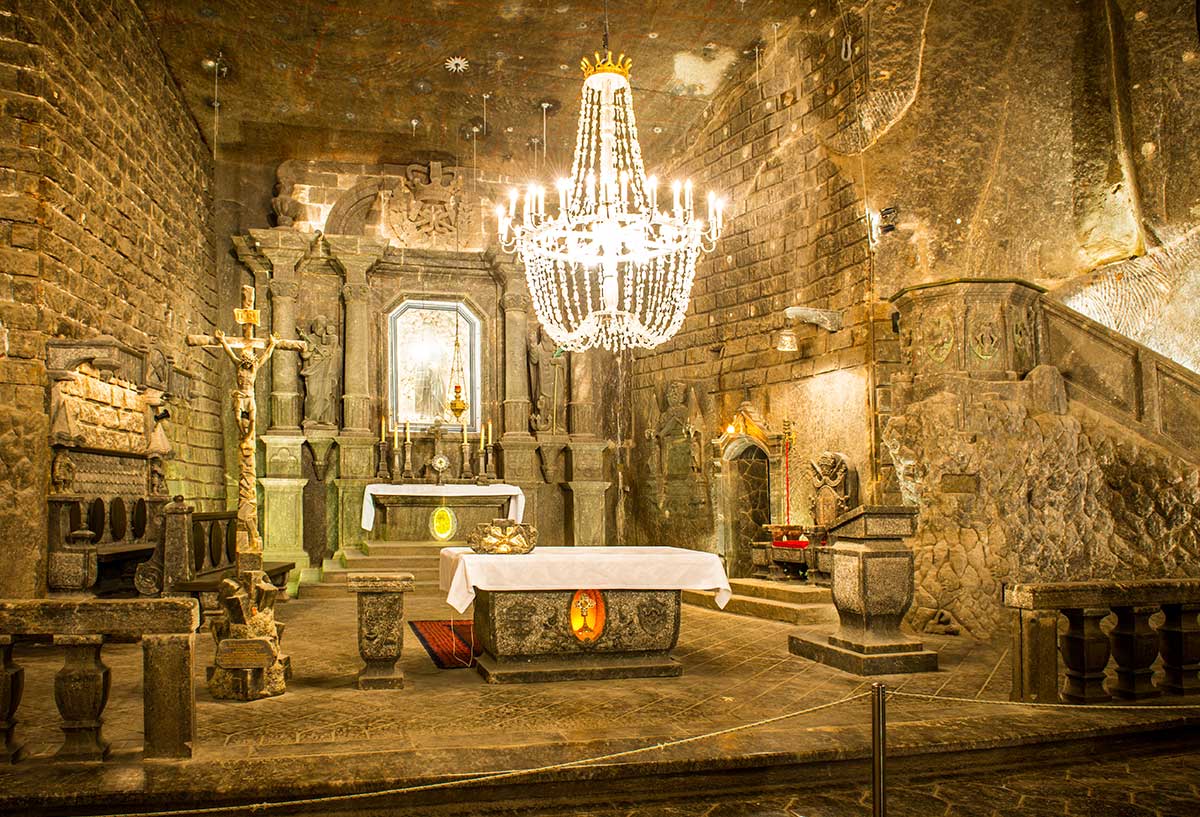 Chapel in the main hall in the Wieliczka Salt Mine, 03 June 2014
Image Credit: Beautiful landscape / Shutterstock.com

Throughout history, salt has consistently been one of the world’s most sought-after commodities, with the earliest signs of its production dating back to 6,000 BC. The Romans built roads to transport it easier, while the word for ‘salary’ comes from the Latin word for salt. There are two main ways to obtain this precious and crucial item: by mining or by evaporating salt water.

Until the Industrial Revolution, salt mining was expensive and highly dangerous. The average lifespan for a salt miner was very low – in part due to the constant dehydration and iodine poisoning caused by the high levels of salt in the air – and as such, salt miners were historically slaves or prisoners. With modern methods of production, the process became much safer, while higher quantities of salt were being extracted, leaving us with magnificent caves and underground halls in its place.

Here are 7 of the most visually awe-inspiring salt mines in the world.

1. The Salt Mine Berchtesgaden – Germany 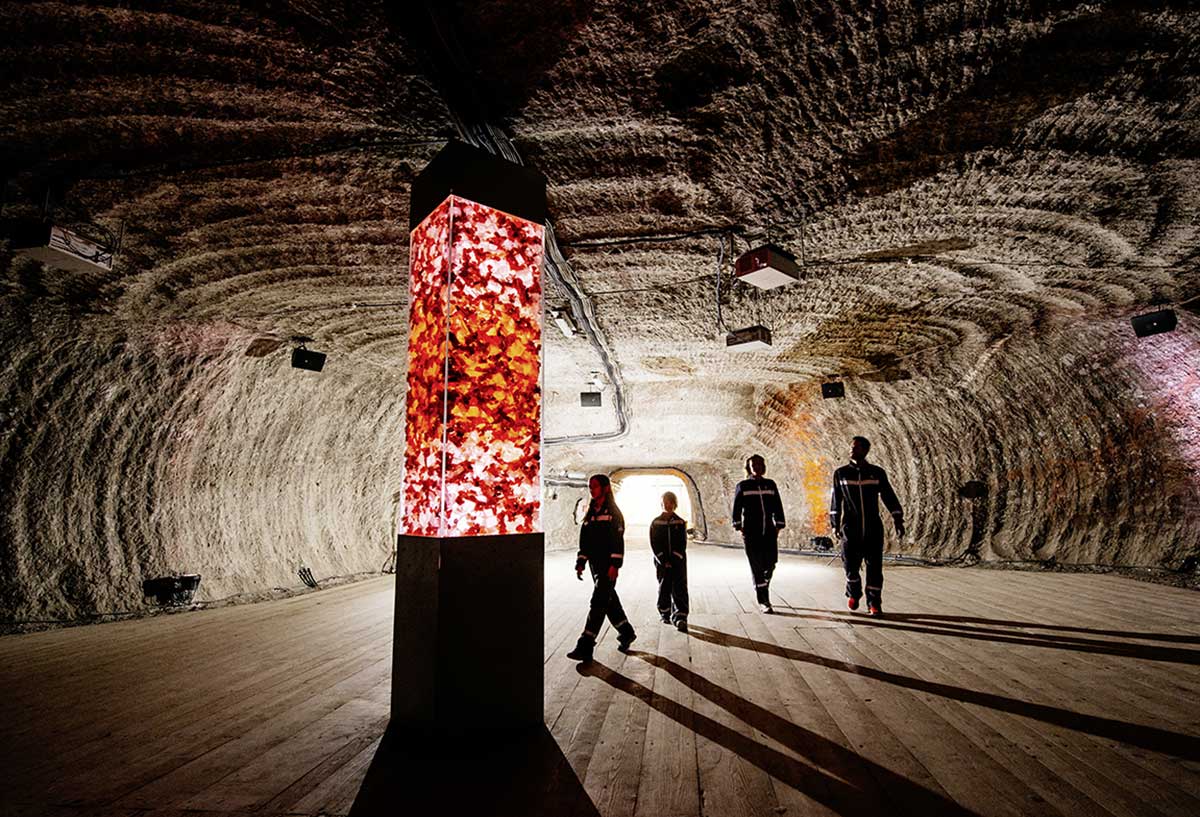 ‘Magic Salt Room’ in the Berchtesgaden Salt Mine

The Berchtesgaden Salt Mine is located in southern Bavaria, Germany. It was founded in 1517 and went on to bring great wealth to the region. These days it is open to tour groups who can cross the underground salt lake, slide down the miner’s slide and experience 3D animations depicting the extraction of the precious material. 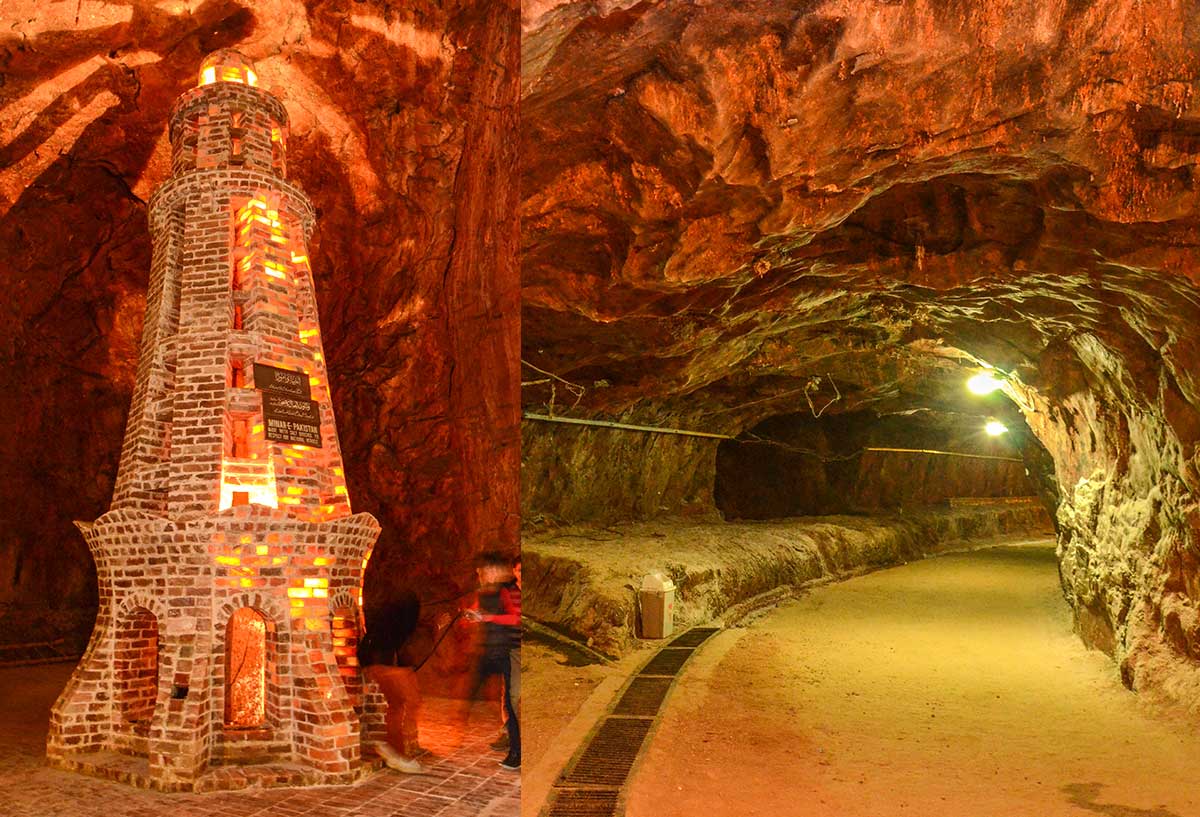 The salt deposits of Khewra, Pakistan, were allegedly discovered by the army of Alexander the Great, while intensive mining has been recorded in the region since 1200 AD. The salt mines are not only incredibly old but are also the second largest in the world. Approximately 200 million tonnes of salt have been extracted from this site over the course of centuries.

The whole complex has 40km worth of tunnels running 730 meters into the mountain, under which the salt deposits are located. One of the most striking structures found in the Khewra salt mine is a small mosque, complete with a small salt minaret. 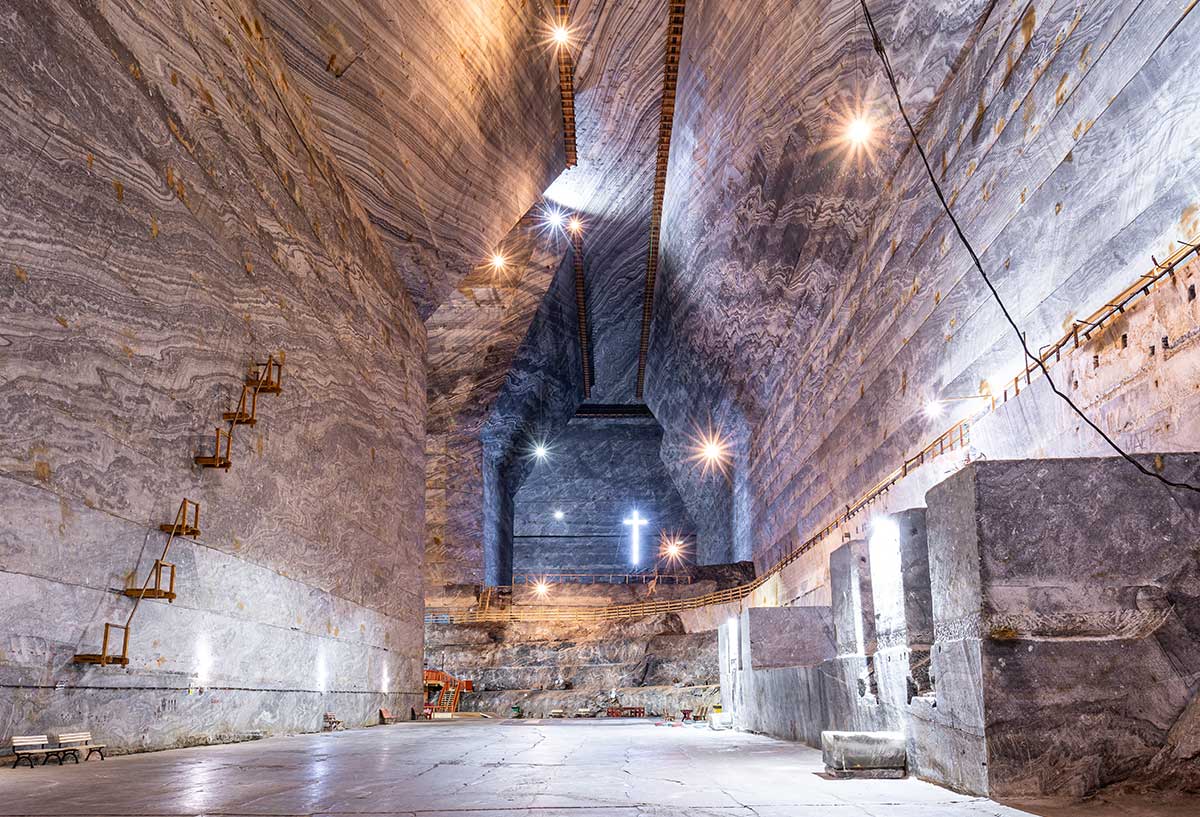 Interior of the Slănic Mine, August 2019

Construction of Romania’s Slănic salt mine started in 1938, with the site becoming fully functional in 1943. It would continue to be used as a working mine until 1970. Almost 30 years of industrial extraction have left immense halls 200 meters deep for visitors to explore. It is recognized as the largest salt mine in Europe with allegedly some of the purest air. 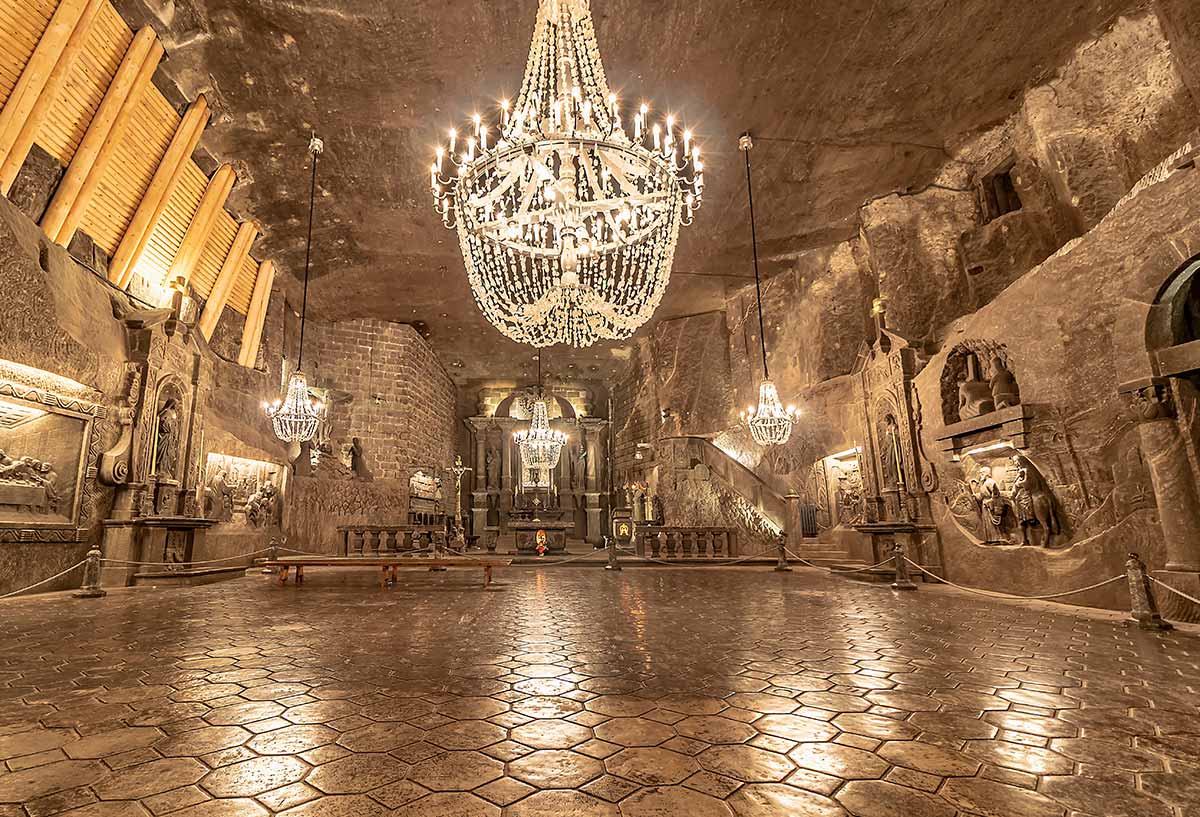 St. Kinga’s Chapel in the Wieliczka Salt Mine

The Wieliczka Salt Mine in Poland has been operational for almost 700 years. The first lumps of salt rock were accidentally discovered in the 13th century, starting a period of wealth and development for the region. The revenue created by the mining operations played their part in turning Poland into a powerful medieval state. One could say that Jagiellonian University, the first of its kind in Poland and one of the oldest in Europe, was built on salt since it was created with the money made in the salt trade.

The Wieliczka Salt Mine was opened up to visitors in the 18th century. The complex is best known for it wondrous chambers, decorated with chandeliers, statues and rich carvings on the walls. 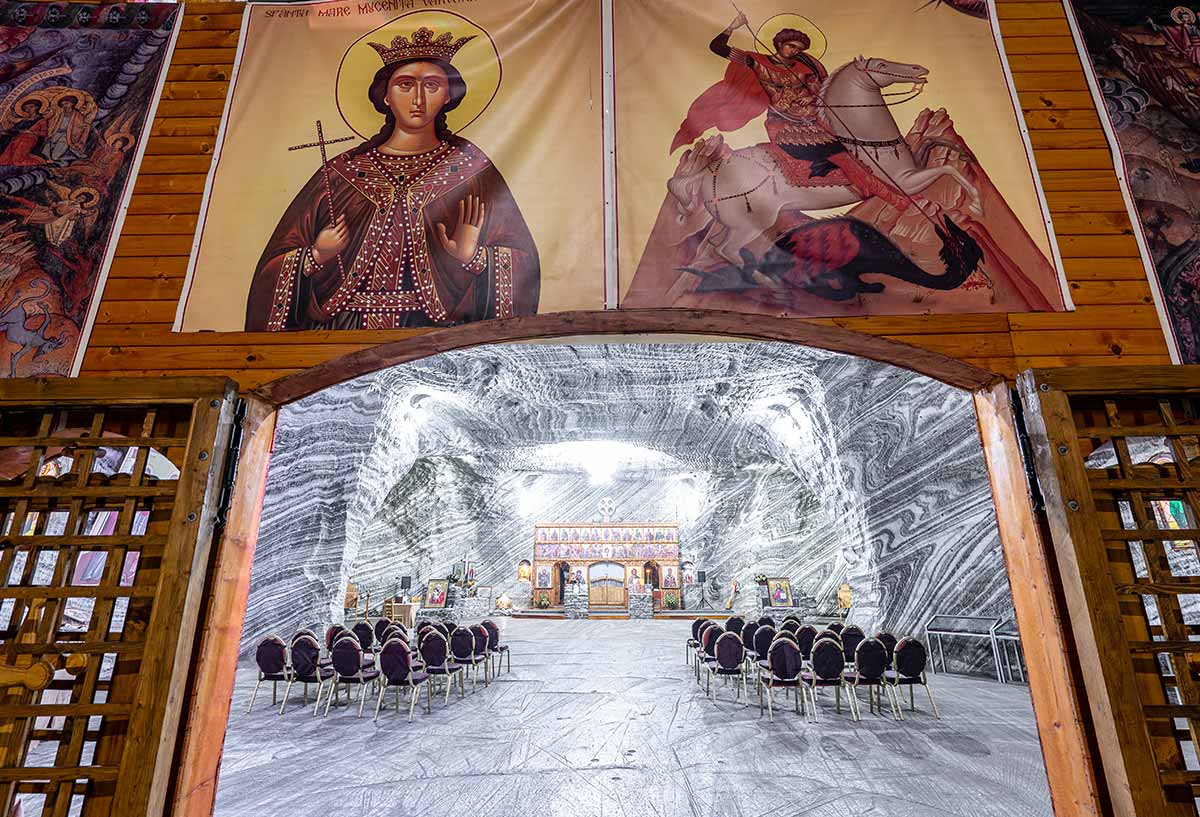 The Ocnele Mari Salt Mine, situated in southern Romania, is still used as a working industrial site, though parts of it are open to visitors. Work on the mine started in ancient times, showcasing the rich history of the region. One of the most striking features is a church dedicated to Saint Varvara, the patron saint of miners. 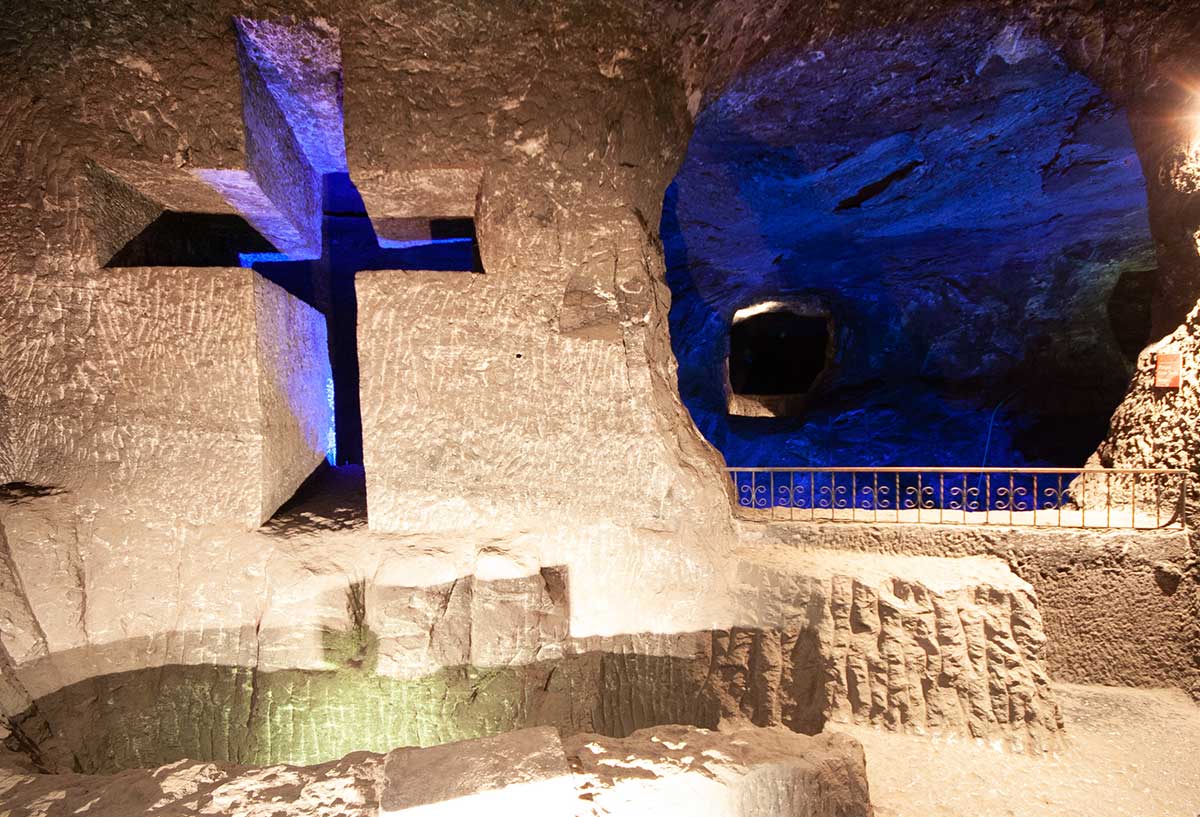 Inside the Salt Cathedral of Zipaquirá

The Salt Cathedral of Zipaquirá in Colombia is a fascinating Roman Catholic Church located 200 meters underground and built into the tunnels of an old salt mine. The cathedral has been described as a “jewel of modern architecture”, and it draws in as many as 3,000 people each Sunday for services. That said, since the site doesn’t have an active bishop, it has no official status as a cathedral in Catholicism.

The first church in the mine was established in the 1930s for the Virgin of the Rosary of Guasá, the patron saint of miners. Structural issue forced the sanctuary to close in the 1990s leading to the development of the current site. Colombia’s Congress has since proclaimed the Salt Cathedral to be “the first wonder of Colombia.” 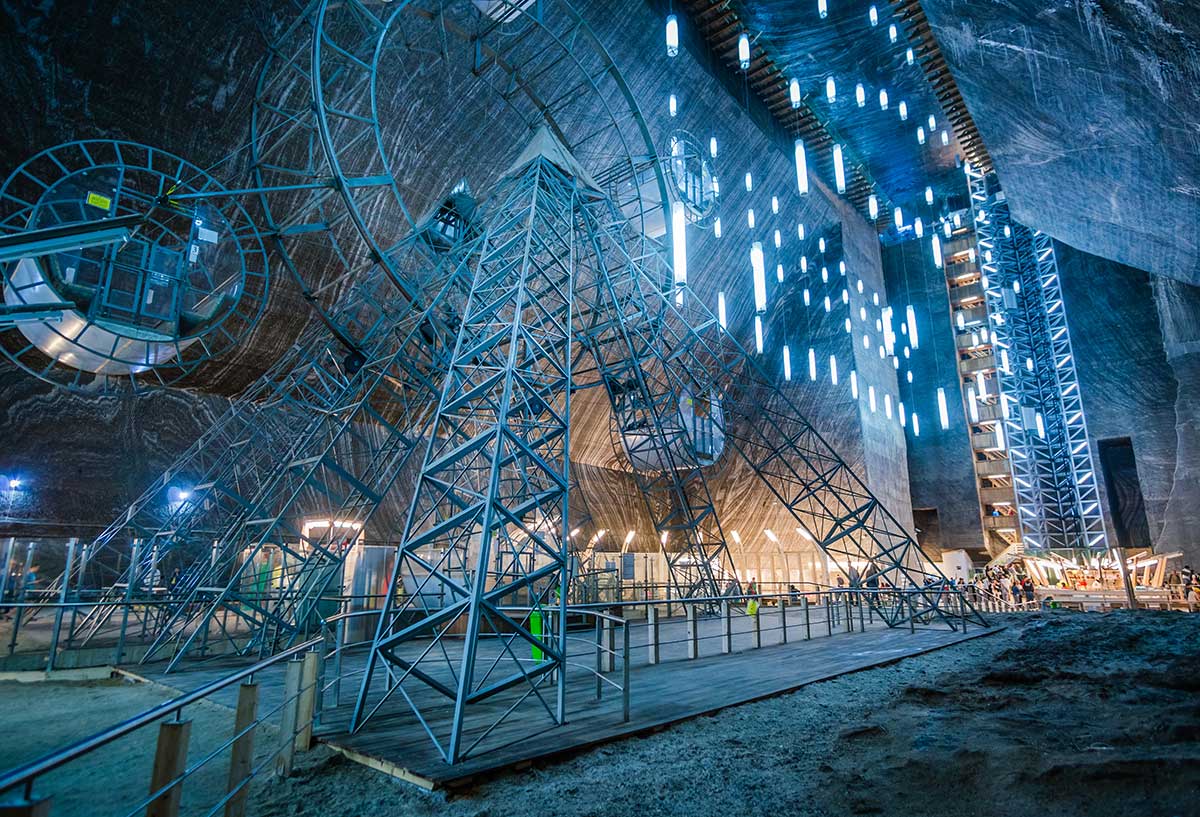 Inside the Salina Turda

The stunning Salina Turda salt mine is situated in the Cluj County region of northwest Romania. Salt mining is said to have started in the area during the Roman period, though there is minimal physical evidence to support that claim. Instead, many theorise that the mine first emerged between the 11th to 13th centuries, with the clearest date being 1271. Salt was extracted there regularly until 1932.

The mine found use again during World War Two, when it was utilised by the local population as an air-raid shelter. The complex was opened up to visitors in 1992 and has become a major tourist attraction for the region.