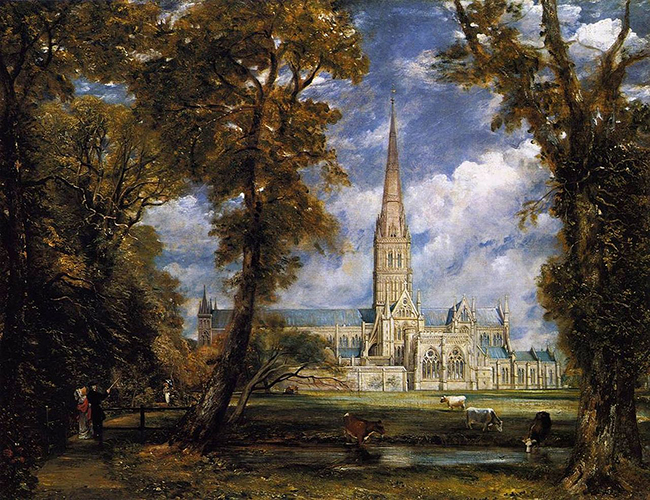 Britain’s medieval cathedrals are a testament to the grandeur of medieval religious architecture. Although many have experienced very turbulent histories, they have withstood the test of time and have now become centre attractions for thousands of tourists from far and wide each year.

Here is a list of ten of the best medieval cathedrals you can go and see in Britain; we have also placed some honourable mentions at the end.

Dating back to 1093 and sitting nearby the equally historic Durham Castle, Durham Cathedral is a unique site and a fine example of Norman architecture. Its setting is picturesque; sitting high above the River Wear the Cathedral dominates the skyline and looms over its cobbled streets and many riverside trails.

Its adjacent library contains such historic documents as pre-Dissolution manuscripts and three issues of Magna Carta. Built under William of Calais, who was appointed as the first Bishop of Durham by William the Conqueror in 1080, its construction was intended to project William’s power over the north of England where many continued to resist the Norman Conquest of 1066.

Though its site was founded as a place of worship in 597 by St Augustine, Canterbury Cathedral as we know it today was built between 1070 and 1077. It contains the shrine of Thomas Becket, its Archbishop who was famously murdered inside the Cathedral by King Henry II’s aids. It is the seat of the Church of England’s senior bishop, the Archbishop of Canterbury.

Built between 1160 and 1200, Christ Church Cathedral sits at the heart of the medieval university town of Oxford. The city of dreaming spires is the location of one of England’s smallest cathedrals. Originally the church of St Frideswide’s Priory, in 1522 the priory was surrendered to Cardinal Wolsey, who had selected it as the site for his proposed Oxford college, Cardinal College.

However, in 1529 the foundation was taken over by King Henry VIII. It was amidst its cloisters that the Archbishop of Canterbury Thomas Cranmer was publicly degraded for treason and heresy; his clothes were stripped and his head was shaved. He was later imprisoned and burned at the stake on nearby Broad Street.

Southwark Cathedral has only had cathedral status since the creation of the diocese of Southwark in 1905. However, its history as being a place of Christian worship goes back over 1000 years. Between 1106 and 1538 it was an Augustinian priory, St Marie Overie, dedicated to the Virgin Mary.

Following the dissolution of the monasteries, it was converted into a parish church and was renamed St Saviours. The church was bought from King James I in 1611 for £800 after some local merchants decided they no longer wished to rent it from the King.

In the present day it is also rather unique, sitting in the shadow of one of Europe’s tallest buildings: the Shard. Modern glass harmoniously meets medieval stone and reflects humanity’s ingenuity, progress and timeless creativity.

Glasgow Cathedral was built during the Twelfth Century and was consecrated in 1197. Surprisingly the Cathedral survived the Scottish Reformation intact and has never been unroofed. This was largely due to the reforming of the Cathedral into three Presbyterian parish churches during the seventeenth century. Restoration began in the 1800s and the Cathedral is now the seat of the Archbishop of Glasgow.

Winchester Cathedral has a rich history. Although the city’s first cathedral dates back to Anglo-Saxon times and was the resting place of many famous monarchs – including both King Alfred and King Cnut – it was demolished by the Normans following 1066 and rebuilt in their image by 1093.

The Cathedral went on to thrive during the rest of the Middle Ages and this continued down to Henry VIII’s infamous dissolution of the monasteries. Yet Winchester Cathedral survived this turbulent period as it was later re-founded.

Construction of Salisbury Cathedral at its present site began on 28 April 1220 and took nearly fifty years to complete – finally being finished in 1266. Salisbury Cathedral is a hotspot for tourists for a number of reasons: not only is its clock one of the oldest working clocks in the World, but the Cathedral also houses one of the four original copies of the Magna Carta.

It is famous for its 123-metre-high spire.

Although we have evidence of churches in York before this date, construction of the York Minster we know today began in c. 1080 after Vikings destroyed its Anglo-Saxon predecessor.

Over the next 400 years the Cathedral underwent irregular periods of construction and expansion, with contemporaries only judging it to be complete and able to be reconsecrated in 1472!

York Minster is one of Britain’s largest cathedrals boasting a nave that is not only 63 metres long, but is also 29 metres high and 32 metres wide! To put that into perspective, its length was over half the size of an average football pitch. York Minster is the seat of the Archbishop of York.

According to tradition, Hereford Cathedral was founded in 696 and became an important religious centre for the Anglo-Saxons. Sadly the building did not stand the test of time: in 1055 it was destroyed when a Welsh Army led by King Gryffydd ap Llywelyn laid waste the city.

Like many other cathedrals in England however, upon their permanent arrival in 1066, the Normans rebuilt Hereford Cathedral in their own image. This reconstruction forms the basis of the Cathedral that exists today.

One of Hereford Cathedral’s most popular attractions is that it contains the T & O derived Mappa Mundi, the only complete Medieval world map of its kind in existence.

The third largest cathedral in Britain, Lincoln dates back to 1072 when Bishop Remigius began to construct the Cathedral. In 1311, the Cathedral’s famous central spire was completed measuring 160 metres tall. Because of this, Lincoln Cathedral became the tallest building in the world for the next 237 years until the spire collapsed in 1548. Sadly it was not rebuilt.

In 1644, during the English Civil War, Oliver Cromwell and his Parliamentarians laid siege to the Royalist-controlled city of Lincoln. The siege quickly proved successful when Parliamentarian forces took control of the lower part of the town and the Royalists retreated to the city’s heart – mainly Lincoln Castle and Lincoln Cathedral. It was during this struggle that Cromwell’s forces damaged the Cathedral. Nevertheless, although damaged, the Cathedral survived.

Despite its somewhat turbulent history Lincoln Cathedral stands strong to this day – even featuring in the final scenes of the famous film, ‘The Da Vinci Code’.

Completed and consecrated in 1108, Chichester Cathedral dominates the centre of the small-but-historically-rich city of Chichester in southern England.

Although it was damaged during both the Reformation and later during the English Civil War, the Cathedral was restored in the 19th Century. To this day Chichester Cathedral remains an iconic centrepiece of West Sussex’s capital city – one of the smallest cities in the UK.

Dedicated in 1101, Norwich Cathedral is one of the finest examples of Norman cathedrals in England and one of 12 heritage sites in the historic city of Norwich.

The Cathedral was badly damaged during the Civil War when it was attacked by a Puritan mob. At least one musket ball fired during the riot remains embedded in its walls.

The Cathedral boasts the only two story cloister in Europe and the Cathedral close is one of the largest both in England and Europe, with more people living there than any other close. Interestingly Norwich Cathedral lacks bells, making it one of only three cathedrals in England without them, alongside neighbouring Salisbury and Ely Cathedrals.

Gloucester Cathedral’s origins date back to the seventh century AD, when an Anglo-Saxon prince founded a religious centre on the site. Despite this, Gloucester Cathedral only became a cathedral in 1541 following the Dissolution of the Monasteries – before then it was an Abbey.

The Cathedral diced with death during Oliver Cromwell’s Republic when there was an attempt to demolish it. Fortunately, the Cathedral was saved by the efforts of local residents and has remained a centre of worship.