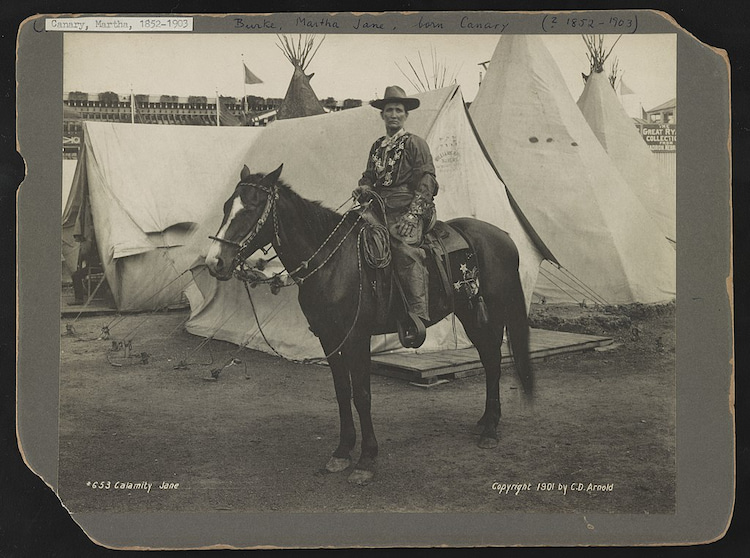 As ever, the truth is more nuanced. Much of what we know about Calamity Jane’s life comes from an autobiographical booklet that she dictated in 1896 which contained highly sensationalised or totally fabricated information.

More truthful reports about Calamity Jane paint a picture of a woman who was never extremely violent, and in spite of her fearsome reputation could also be kind and charitable. She cared about her daughters, tended to the sick and had a lifelong unrequited love for Wild Bill Hickok before dying impoverished and ravaged by alcoholism.

Here are 10 facts about Calamity Jane and her fascinating life.

1. She was one of six children

Calamity Jane was born Martha Jane Cannary on 1 May 1852, in Princeton, Missouri. She was the eldest of six children born to Robert and Charlotte Cannary, who were reportedly unsavoury figures involved in petty crime. The family was often financially destitute.

In 1865, the family moved by wagon train to Montana, perhaps to try and make their fortune in the goldfields. Jane’s mother Charlotte died of pneumonia en route.

Jane’s father Robert then took his children to Utah, where he found work as a farmer. He died in 1867, leaving 14-year-old Jane in charge of her five younger siblings. Jane loaded up their belongings on a wagon, and the family travelled to Piedmont, Wyoming.

3. She worked a variety of jobs 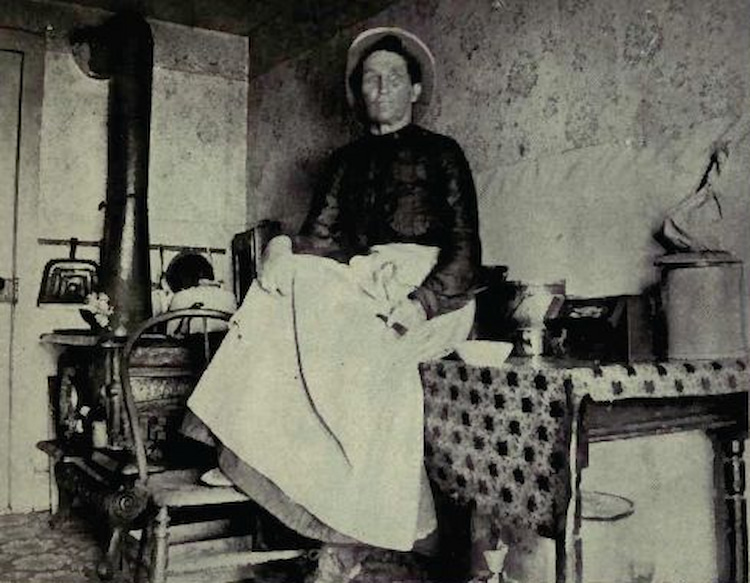 Calamity Jane in her kitchen in Livingston, Montana, when she met Louis R. Freeman in 1901, the meeting described in “Down the Yellowstone”, pub. 1922.

In Piedmont, Jane took jobs as a dishwasher, cook, waitress, dance hall girl, nurse, ox-team driver and from 1874 was an on-and-off sex worker at the Fort Laramie Three-Mile Hog Ranch. It was at this time that Jane began to take on male jobs and wear male clothing, and became known for her horseriding and shooting abilities.

She then moved to a rougher and more adventurous life on the Great Plains, where she became involved in several campaigns as part of long-running military conflicts with Native American groups. However, Wild West storyteller Captain Jack Crawford stated that Jane “…never saw a lynching and never was in an Indian fight. She was simply a notorious character, dissolute and devilish, but possessed a generous streak which made her popular.”

4. The origins of her nickname are disputed

It was claimed that Jane earned the nickname ‘Calamity Jane’ during her time as a sex worker. It is also claimed that the name was a result of her warnings to men that to offend her was to ‘court calamity’.

Jane herself claimed that she was given the name between 1872-1873 by Captain Egan, who was in command of a post in Goose Creek, Wyoming. When ordered to quell an uprising of Native Americans, Captain Egan was wounded but was saved by Jane, and reportedly stated, “I name you Calamity Jane, the heroine of the plains”.

What is certain is that she was known by the nickname by 1876, when Jane arrived in Deadwood and the local newspaper reported that “Calamity Jane has arrived!”

5. She could be kind and charitable

Alongside her fearsome reputation as a gunslinger, Jane was known to have a tender side. At one time, she saved numerous passengers in a stagecoach by diverting several Native Americans who were in pursuit and took over the reins herself to drive the vehicle to safety.

Many accounts also state that in 1876 or 1878 she nursed many victims of a smallpox outbreak. When tending to the children, a doctor noted that “oh, she’d swear to beat hell at them, but it was a tender kind of cussin’.”

6. She had a rumoured relationship with Wild Bill Hickok 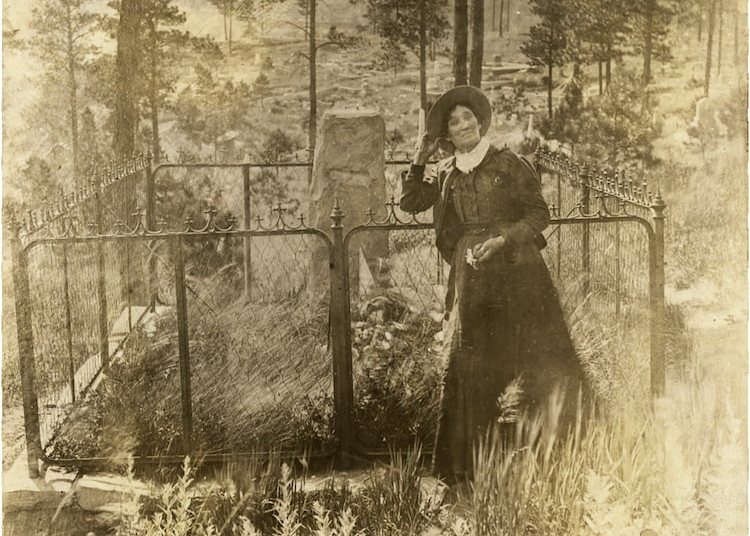 Calamity Jane met Wild Bill Hickok in 1876 when he was travelling in the same wagon train to Deadwood, South Dakota. As elaborate exaggerators and heavy drinkers, the pair are said to have hit it off immediately.

Though it has been widely reported that the two were romantically involved and even had a child together, there is little evidence to support the stories. Reports from the time instead indicate that Jane claimed to love Hickok, but he did not return her affections.

7. She reportedly had two daughters

In August 1885, Jane reportedly married a man named either Edward or Clinton Burke and gave birth to a daughter in October 1887. Numerous accounts report that she was often seen with a young girl in several small towns throughout the Old West in the 1880s and 1890s. No marriage or birth certificate exists.

In 1941, a woman named Jean Hickok Burkhardt McCormick, who had claimed to be the legal offspring of Jane and Hickok, was proved to be a fraud. McCormick was also responsible for publishing a bundle of unsent letters to Jane’s daughter which were found among Jane’s belongings at her death. Their authenticity is disputed, largely because Jane was almost certainly illiterate.

8. She performed with Buffalo Bill 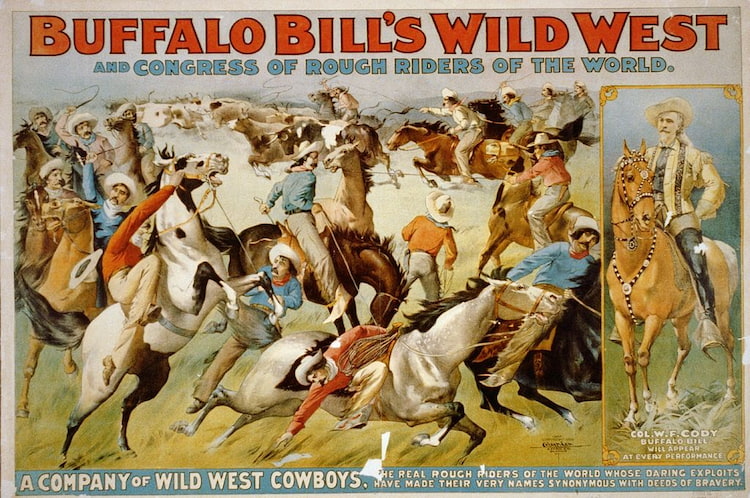 Jane had a reputation for impressive horsewomanship and shooting abilities. As a result, her skills took her to Buffalo Bill’s Wild West Show in 1895 where she performed sharpshooting astride her horse. She toured Minneapolis, Chicago, St. Louis and Kansas City, and she was widely famed. However, she was frequently fired for drunkenness.

In 1901, she was hired by the Pan American Exposition in Buffalo, New York. However, she then lost her job and was chased out of the town for drunkenness, cursing and being disruptive.

9. She was an alcoholic

There is evidence that Jane was an alcoholic from a young age. For instance, in 1876, she rented a horse and buggy for a one-mile joy ride. However, she was so drunk that she accidentally passed right by her destination and ended up around 90 miles away at Fort Laramie. 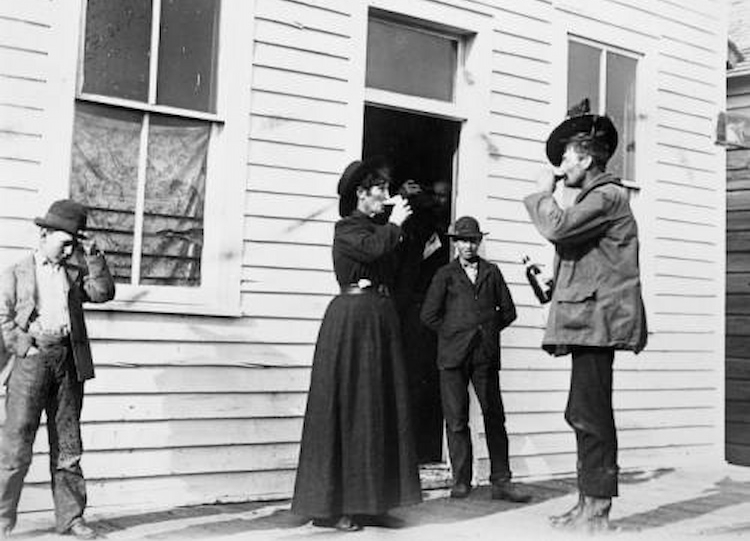 Calamity Jane and Teddy Blue Abbott drink beer at a bar in Gilt Edge, Montana, circa 1887.

In the late 1880s, Jane returned to Deadwood and organised a benefit at a theatre to raise money for her daughter’s education at a nearby Catholic boarding school. Though the benefit raised a large sum, she got drunk and spent a large amount of money on the same night.

Jane was apparently aware of her weakness for alcohol and was motivated to seek a better life for her daughters as a result.

By the turn of the century, Jane’s hard life was catching up with her. Severe alcoholism and poor health meant that she was taken ill on a train and sent to the Calloway Hotel in Terry, South Dakota. She died on 1 August 1903, from inflammation of the bowels and pneumonia.

Her dying wish was to be buried next to Wild Bill Hickok. Her request was granted, and she was buried on Mt. Moriah overlooking the town of Deadwood. Her funeral was the largest to be held in Deadwood for a woman. Touchingly, her coffin was closed by a man who, as a boy, she had nursed back to health when he suffered from smallpox as a child. 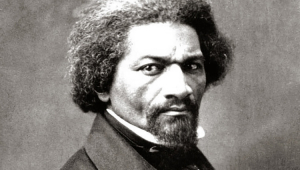 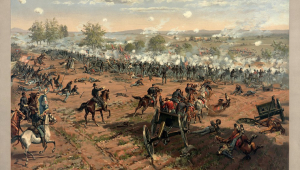 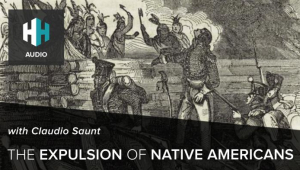 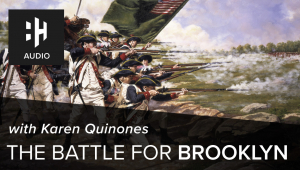 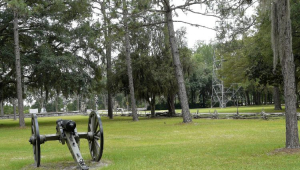