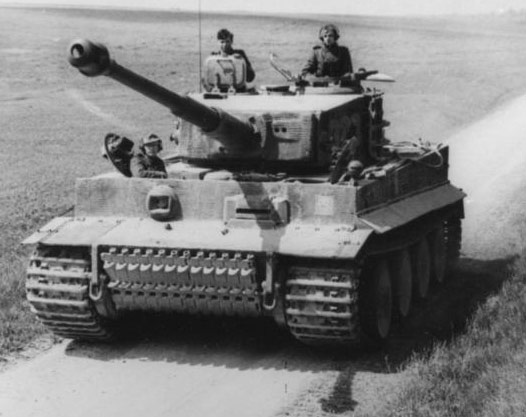 The tank was invented by the British as an attempt to break the stalemate of World War One. Although initially slow, cumbersome and unreliable, the future potential of tanks was recognised at the time and they remain a mainstay of conflict to this day.

Tank development in the 1930s was variable depending upon the differing military philosophies held by the powers of the day.

Having adopted the idea of Blitzkrieg, which was first conceived in Britain during the 1920s, the Nazis focused upon making the tank an instrument for line-breaking offensives through speed, armour and firepower.

A similar perspective was also adopted by the Soviets. The British and French retained a more conservative approach, however, continuing to see the tank as an implement for reconnaissance and infantry support.

This meant that Allied tanks were relatively inadequate until the introduction of American machines in 1942.

The British Matilda was a well-armoured vehicle, but its 40 mm gun was soon shown to be inadequate in comparison to those on the German tanks.

The Matilda was also disastrously slow and was often knocked out of action by German artillery before reaching firing range. Its reliability and protection did mean that British tank crews often held affection for the Matilda.

The Vickers Light Tanks offered the British a speedier option, with the Mk V capable of reaching 32 mph, making it an adequate reconnaissance vehicle.

It carried machine guns, but lacked real offensive power and was poorly protected by its light armour.

Early models of the British Crusader were also too lightly armoured. These tanks were disastrously unreliable, with more lost due to mechanical failure than combat damage.

Eventually, the Cromwell proved to be an adequate rival to the German tanks. Introduced in 1943, it soon gained a 75 mm gun and was widely employed following the D-day landings, being mobile and with a reliable Meteor engine.

The French Char B1-bis was as well equipped for offence as later tanks, with a superficially impressive 75 mm gun. On the battlefield, however, this proved difficult to use effectively due to issues of reliability, tactics and personnel.

Panzerkampfwagens were central to the Nazi conquests over much of Europe in the first part of the war, highlighting Germany’s superior technological and tactical developments, and instilling a great sense of confidence.

Rommel’s success in North Africa owed much to the German Panzer III, which could reach 25 mph, had a 37 mm gun that grew to 50 mm and 19 mm armour, as well as the Panzer IV, which boasted a 75 mm gun.

The Soviet T-34 Medium was developed from 1937-9 and went into full production from June 1940. This tank became somewhat of a benchmark and around 40,000 had entered combat by the end of the war.

Such high volume production was facilitated by simple design, which made T-34s easy to build, allowed for parts to be used in numerous vehicles and made repair and replacement relatively simple.

The T-34 was vital to preventing Nazi conquest over winter 1941. Its 76 mm gun made Panzer Mk-3s particularly vulnerable to attack, whilst matching the Mk-4s for firepower.

The T-34s sloping armour made it less susceptible to opposing fire and its wider tracks gave superior mobility across tough terrain.

The reliability and sheer volume of T-34s ultimately proved decisive in opposition to the German tanks in the east.

The Panzer V, better known as the Panther, was developed in response to the T-34, borrowing many of the principles that made the Soviet tank such an effective weapon.

It was protected by sloping armour, had a more powerful engine and a 75 mm gun that could pierce armour from over 1 km.

Although the Panther was the finest tank that the Germans produced during the war, they overlooked the advantages of simple design. Over-engineering meant that the Panther was more complex, slower to produce and less easily repaired.

The Panzer VI Tiger superseded the Panther in early 1943. It carried a devastating 88 mm gun and frontal armour that was relatively impervious to attack, but at 55 tonnes was almost twice as heavy as the T-34 and too long in production due to further over-engineering.

The Germans also developed the King Tiger, a new form of the Panzer VI that was introduced in Tunisia in February 1943 although primarily intended for use in the east.

This tank combined elements of the Panther and the Tiger. Its 88 mm gun had a greater range than any rival, whilst it wore so much armour that it weighed 68 tonnes. Although an intimidating prospect, only 485 were ever produced.

The American M3 Medium, which became known as the Grant, was brought into service by the British in May 1942 as a remedy to the largely ineffective options they had hitherto relied upon.

Its 75 mm gun, top speed of 26 mph and good reliability helped the British to make up ground on the Germans in tank capability.

The M3 was then followed by the M4, or Sherman. This was produced in huge numbers, with about 50,000 built by the end of the war. The M3 was a highly manoeuvrable tank that could reach 29 mph despite weighing 30 tonnes and its 75 mm gun fired both armour-piercing and high-exploding shells.

The Sherman had a fatal weakness, however, in that it used petrol rather than diesel and had a propensity to burst into flames. This led to them being dubbed ‘Tommy-cookers’ by the Germans.

They were nonetheless vital to securing victory in North Africa and also counted for the bulk of allied tanks in Europe following the D-day landings.

Similarly to the T-34s in the east, the sheer volume of their production ultimately paid dividends.

This British light tank made by the renowned engineering company Vickers inspired many countries to produce their own versions of the tank. These included the Polish 7TP, Italian M11/39 and later models, Soviet T-26, Type 95 Ha-Go and the M2 light tank.

It was conventionally built in two types: Type A had two turrets, each mounting a Vickers machine gun. Type B had a single two-man turret mounting a single machine gun and a short-barreled 47 mm cannon OQF 3-pdr Gun.

Designed by J Walter Christie, the American engineer and inventor known for developing the Christie suspension system, this experimental prototype originally built in 1932 led to the Soviet BT series and later to the famous T-34 (and many other prototypes or series).

Though the US Army purchased several prototypes such as the T3E2 and developed its own experimental designs based on Christie designs, none of the Christie designs ever saw mass production.

This Czech-made light tank was a very successful design, illustrated by the German army’s adoption of the tank upon their takeover of Czechoslovakia.

It was used in the invasions of Poland, France and Russia in its better known form as the Panzer 38(t), before its production ended in 1942 when its armament was deemed inadequate.

However its chassis and other components continued to be produced until the end of the war as part of the production line of the Jagdpanzer 38(t) and the Marder III.

Its German name makes reference to its Czech origins; the (t) stands for tschechisch, the German word for Czech.

This medium tank was the most widely manufactured and deployed German tank of the World War Two. It was designed as an infantry support tank and was not intended to engage in enemy combat.

Robust and reliable, the Panzer IV saw service in all combat theatres involving Germany and was the only German tank to remain in continuous production throughout the war, with over 8,800 produced between 1936 and 1945.

This light soviet tank used by the Red Army replaced both the T-60 scout tank for reconnaissance and the T-50 light infantry tank for infantry support.

The tank was operated by a driver and a commander who loaded and fired the gun. Armour thickness on the turret front was 60 mm, hull front and sides: 45 mm, rear and turret sides: 35 mm, roof and bottom: 10 mm. It was armed with a 45-mm L/46 gun Model 38 with forty-five rounds carried, and a coaxial 7.62-mm DT machine gun.

It remained in service until 1948 and was used as a basis for both the T-80, which was more advanced and had a two man turret, and the T-90 self-propelled anti-aircraft gun, which drew on the T-70’s chassis.