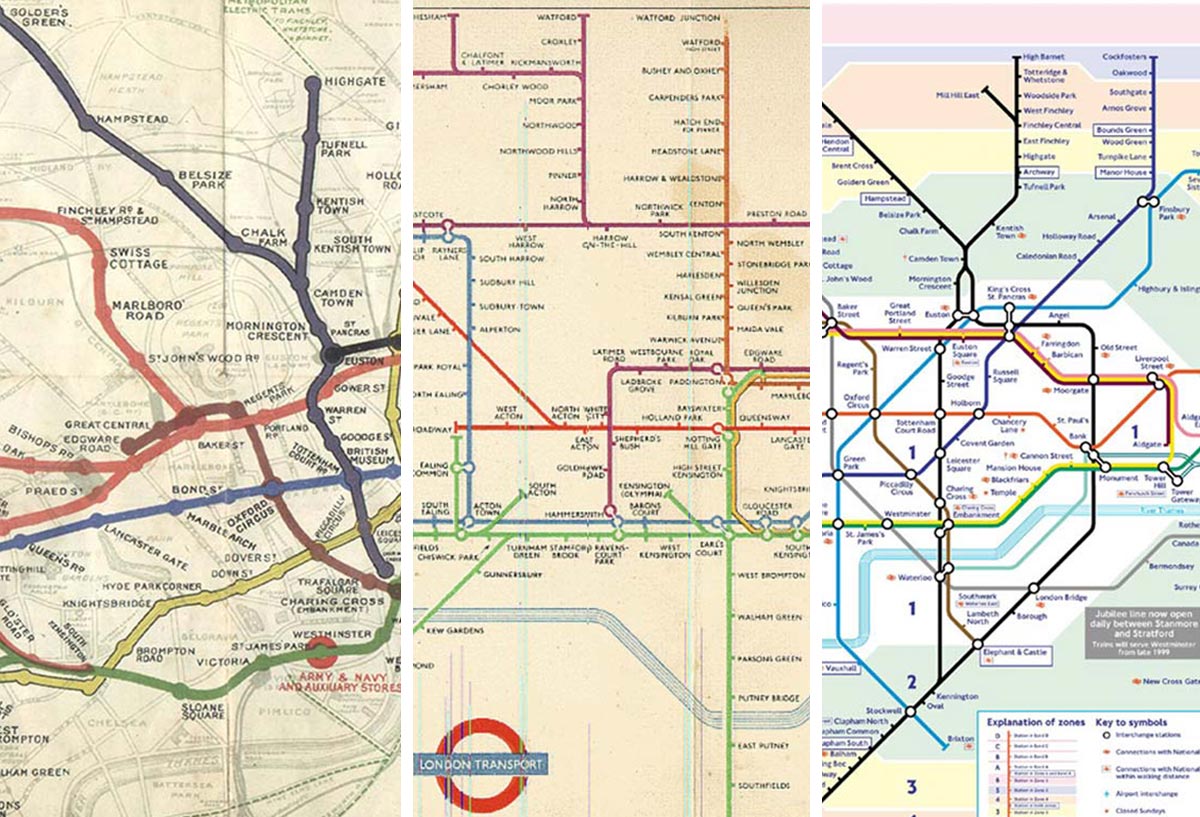 The London Underground, commonly known as ‘the Tube’, is the oldest subterranean civic railway system in the world, having been operational since 1863. Of course, in those days, there was only one 6-kilometre long line between Farringdon Street and Bishop’s Road, Paddington. The coaches were driven by coal-powered steam trains, filling the tunnels with sulfurous fumes. Nonetheless, the line was a huge success, with more and more routes added over the coming years.

With the opening of the first lines came the need for maps indicating the different stops. The first Tube map to show various train lines within a single design was created in 1907, while cartographer Harry Beck’s iconic stylisation of the Tube map – many features of which are still used today – was first published as a pocket map in 1933. The Tube map has now become an icon in its own right, being viewed by hundreds of thousands of people every day.

To commemorate the opening of the Elizabeth line in 2022, which marks the biggest change to the London Underground in decades, we will be looking back through its ever-changing map designs, from the first Tube maps to its 21st-century incarnations. 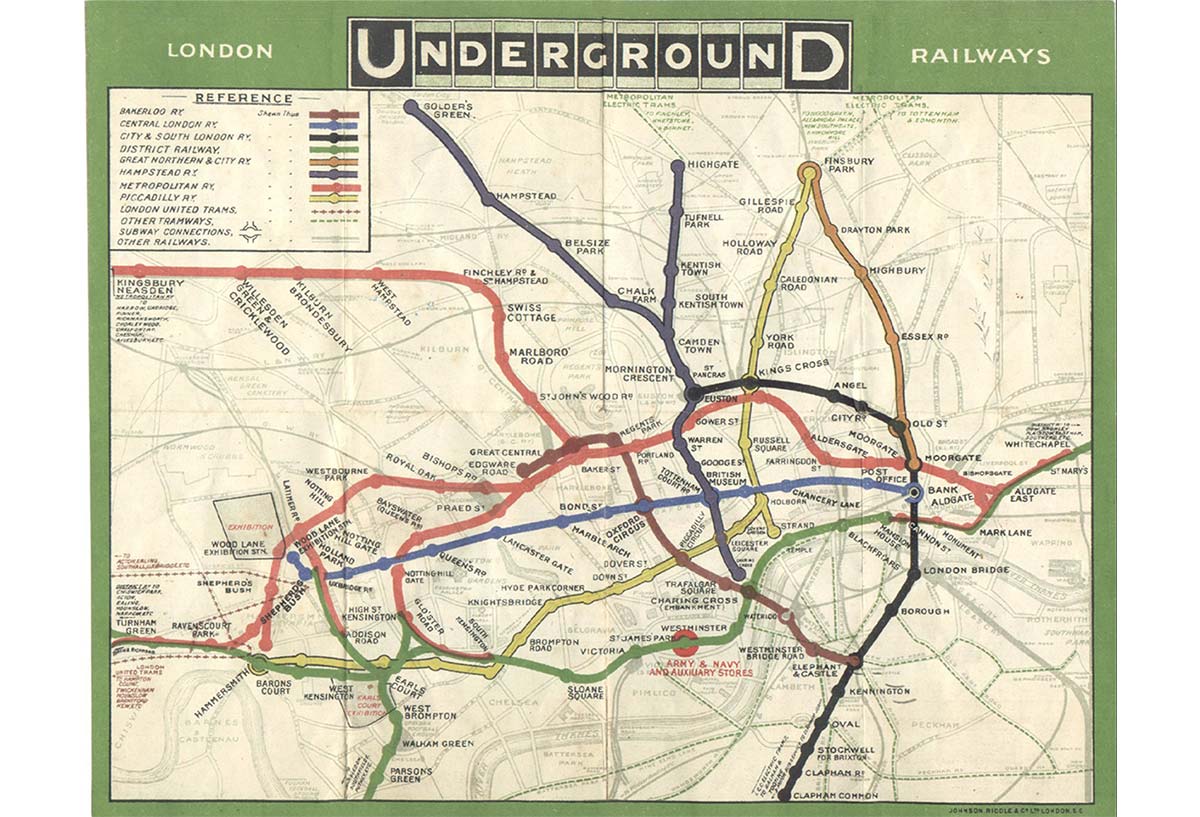 Most underground rail lines had been separate in the 1800s, operated by individual companies. One of the earliest maps that showed multiple tube lines was created in 1908 by the Underground Electric Railways Company of London. It consisted of 8 routes – four operated by the UERL and one from each of the other four companies.

The different providers all used the ‘Underground’ brand as a common advertising strategy. It would be an understatement to say that the 1908 tube map was not the easiest to decipher. Station names were written in a very small font size, while some were twisted to fit around the coloured lines. 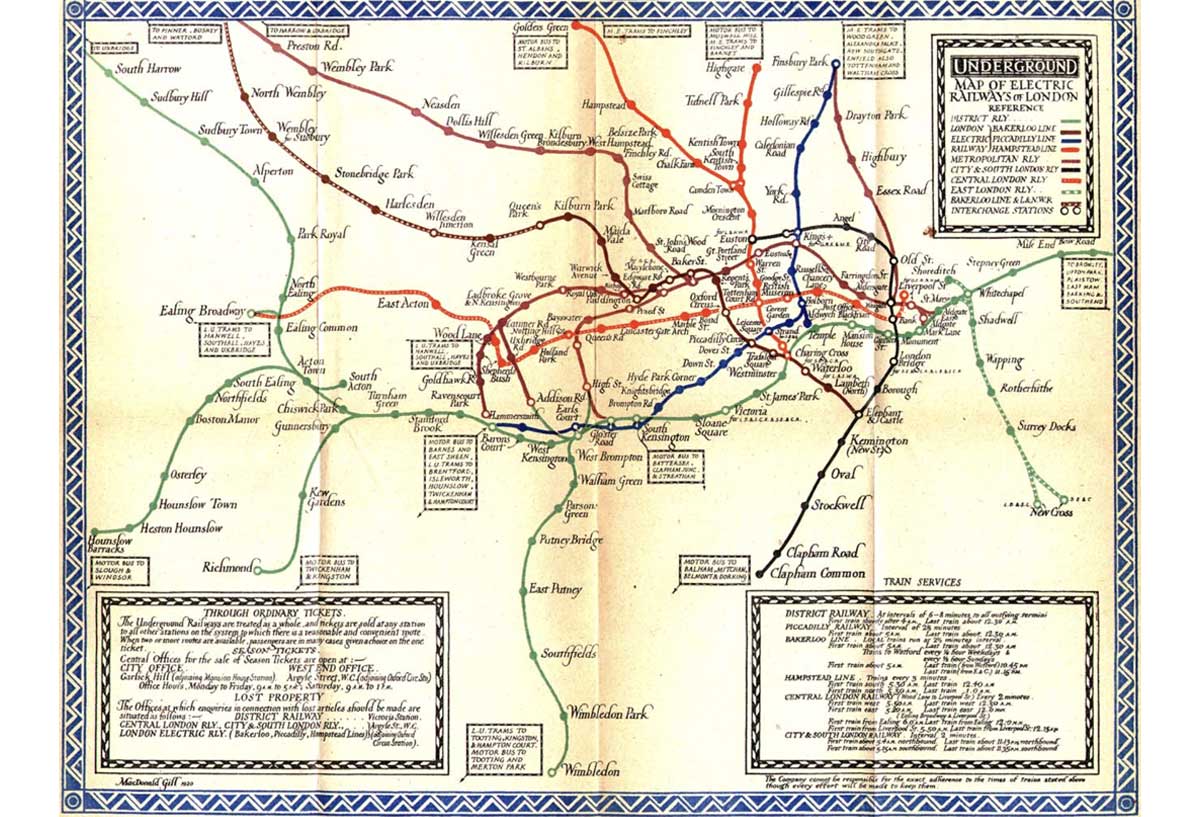 This 1920 MacDonald Gill map was the first one to leave out geographic background details, making it much less busy compared to previous iterations. The design allowed for greater flexibility in the positioning of lines and stations. The maps from the era would depict the underground lines not as straight lines but as reflections of how they lay geographically. This would change in the 1930s. 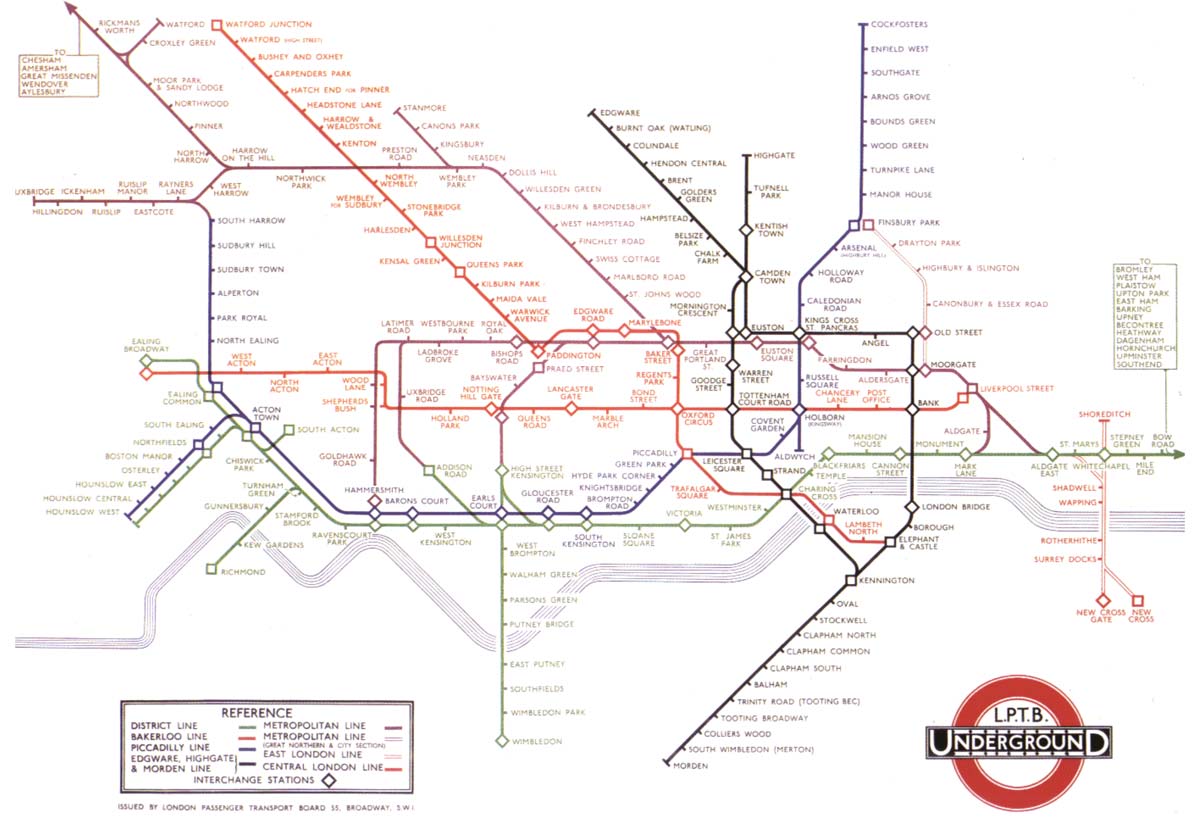 London Underground map, 1933. It is taking a more familiar shape

In his spare time, cartographer Harry Beck designed a revolutionary new Underground map. It abandoned the geographically realistic depictions of the tube for a highly stylised look, which enlarged the central, more crowded portion of the city. He used straight lines, with different colours showing the different tube routes. Beck added some more changes after his initial design was turned down. He enlarged the station names and added the now-familiar rectangular ‘ticks’ to indicate the stops.

Beck submitted his proposal again in 1933 and got it published as a trial pocket map the same year. It was an immediate success, leading it to be distributed more widely. The same year, London Transport had brought together all the different Tube service companies to create a unified entity. 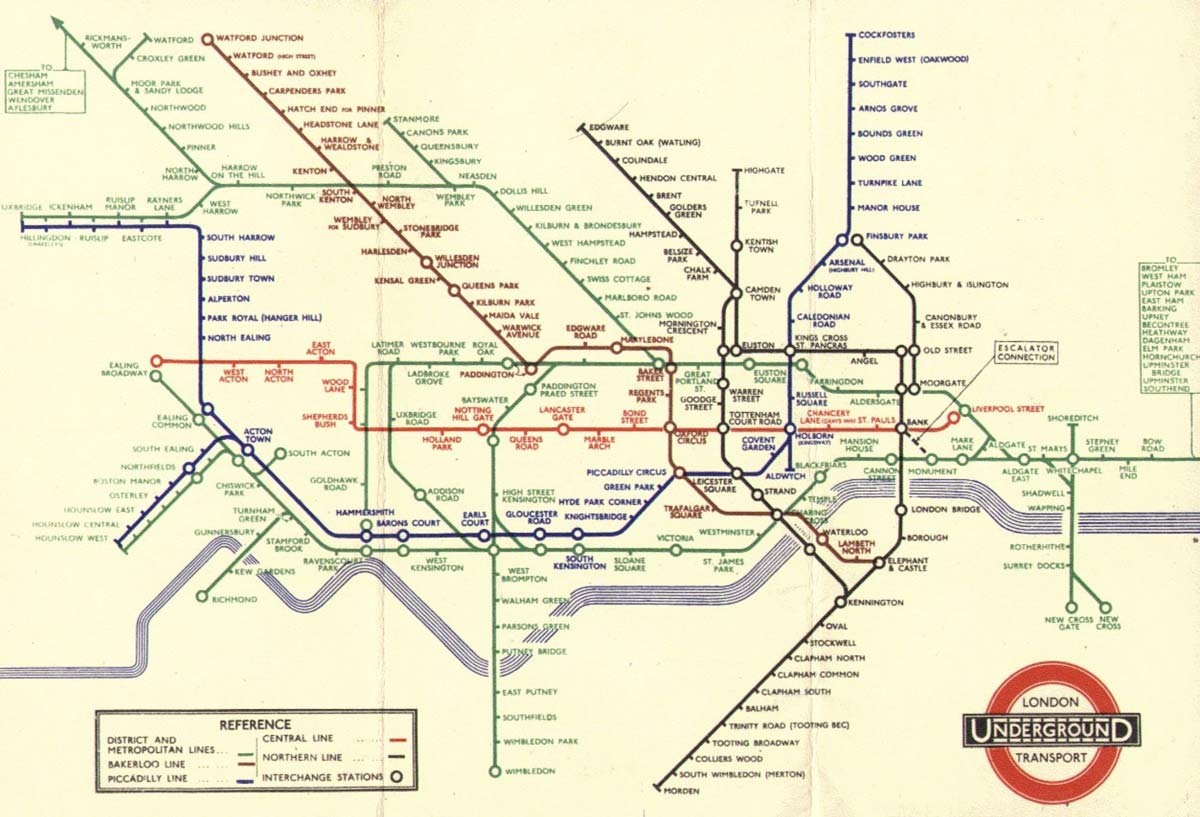 Harry Beck’s design would be slightly changed and tweaked in the ensuing years. One of the earlier modifications was changing the colours for the Bakerloo and Central lines in 1935. In the original, they were marked using red and orange, but it was difficult to tell these colours apart in the artificial light of the tube trains. The map was altered to show the Bakerloo line as brown and the Central line as red. 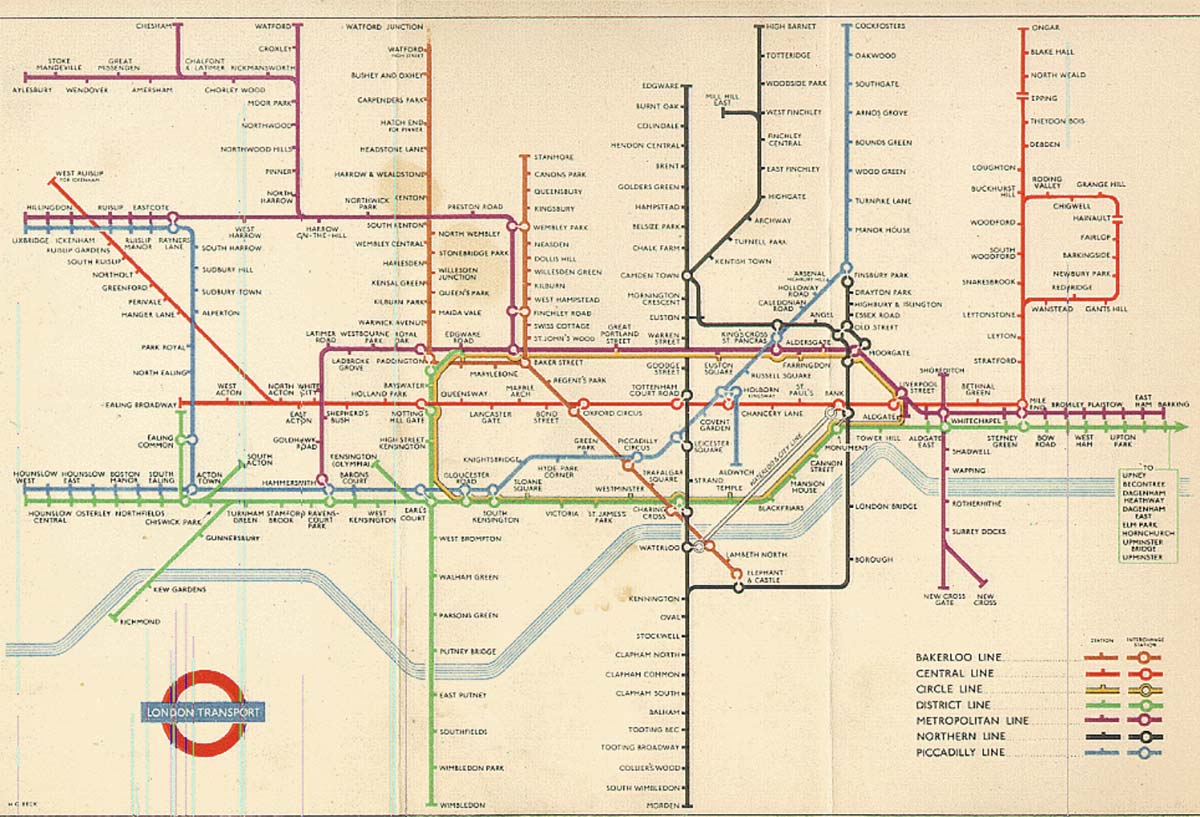 Beck considered his 1950 map to be his greatest achievement. For the first time, the Circle line was shown as a separate route. Interchanges were marked with open circles joined by white lines. 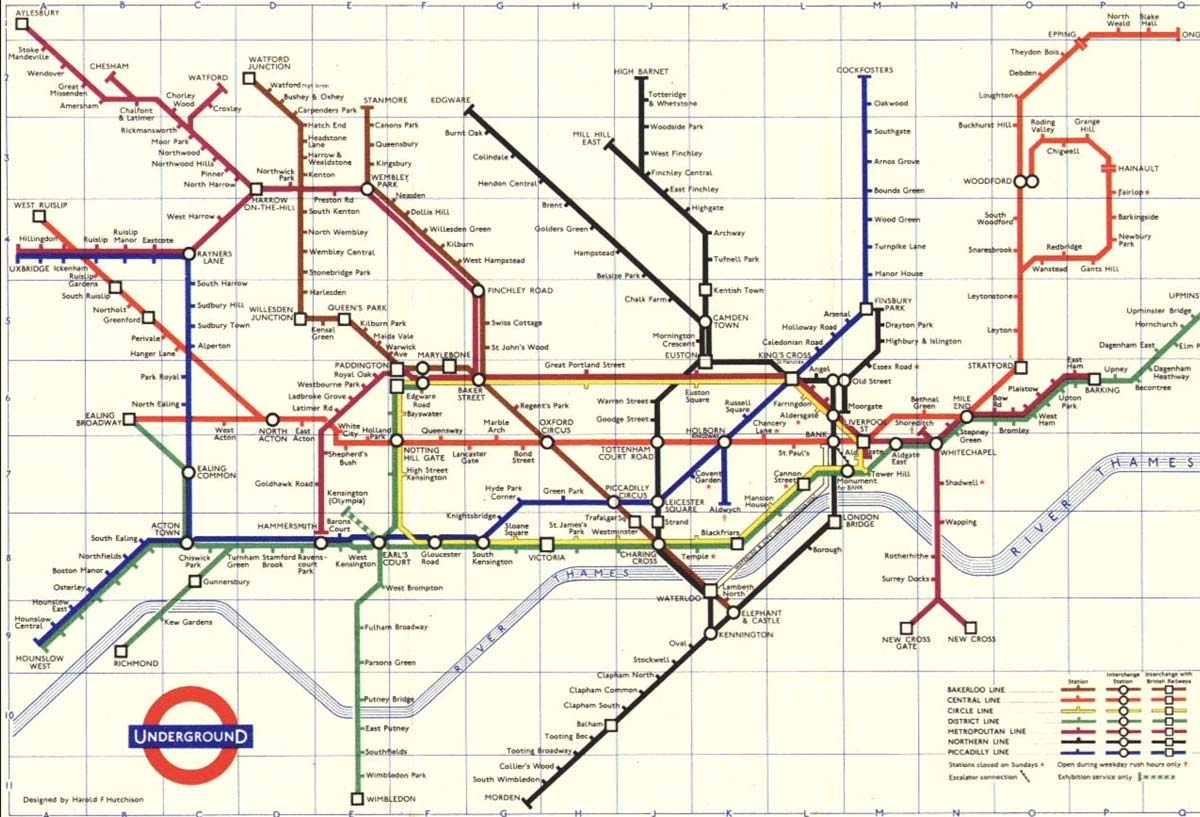 The biggest change to Beck’s original concept came in 1960 when Harold Hutchison added new design elements, sharpening any curved lines, combining both upper and lower case station names and splitting station names on either side of the line, as with ‘Ald-gate’. Beck was not pleased with the changes, having not been consulted about them beforehand. This caused him to fall out and leave London Transport. 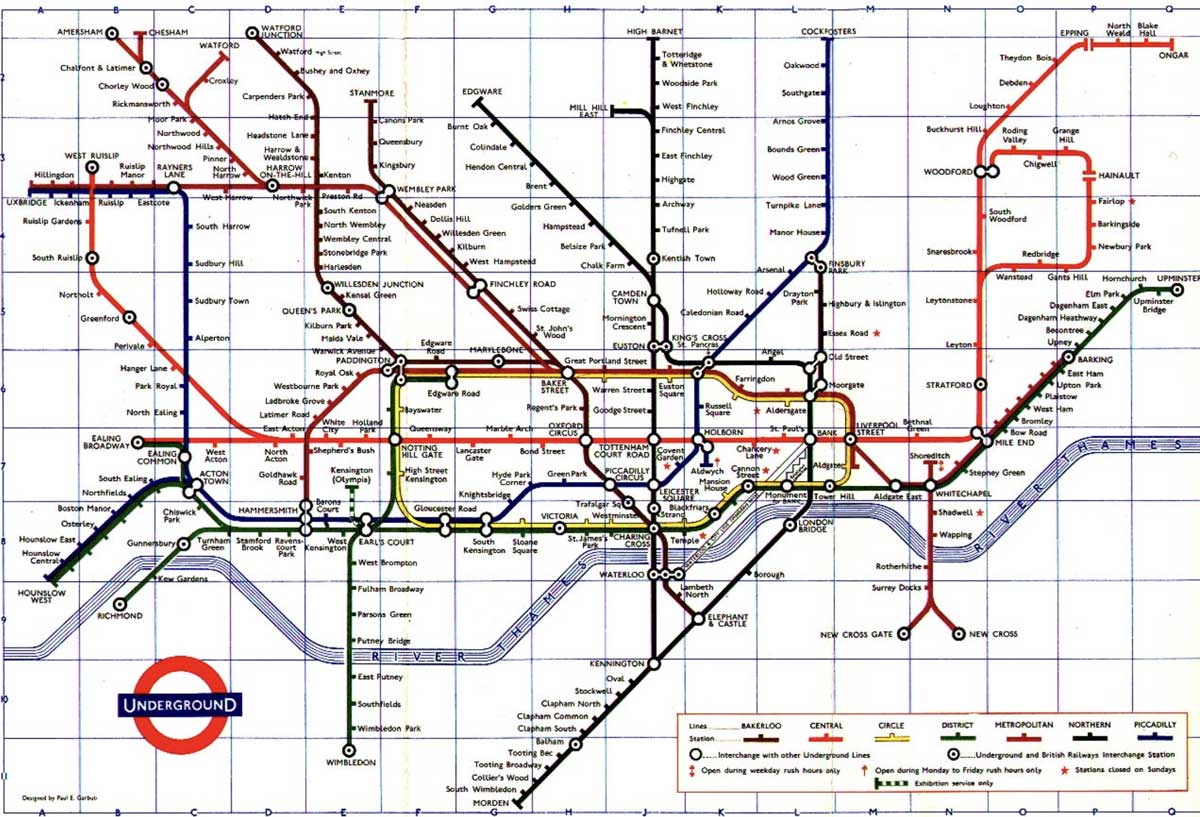 Variations of the Hutchison map would also show the Victoria line route which was being built at that time. The map was not widely popular with the public who preferred the previous variations. In 1962 it was replaced by the design created by Paul Garbutt, who brought back the feel of Harry Beck’s work. 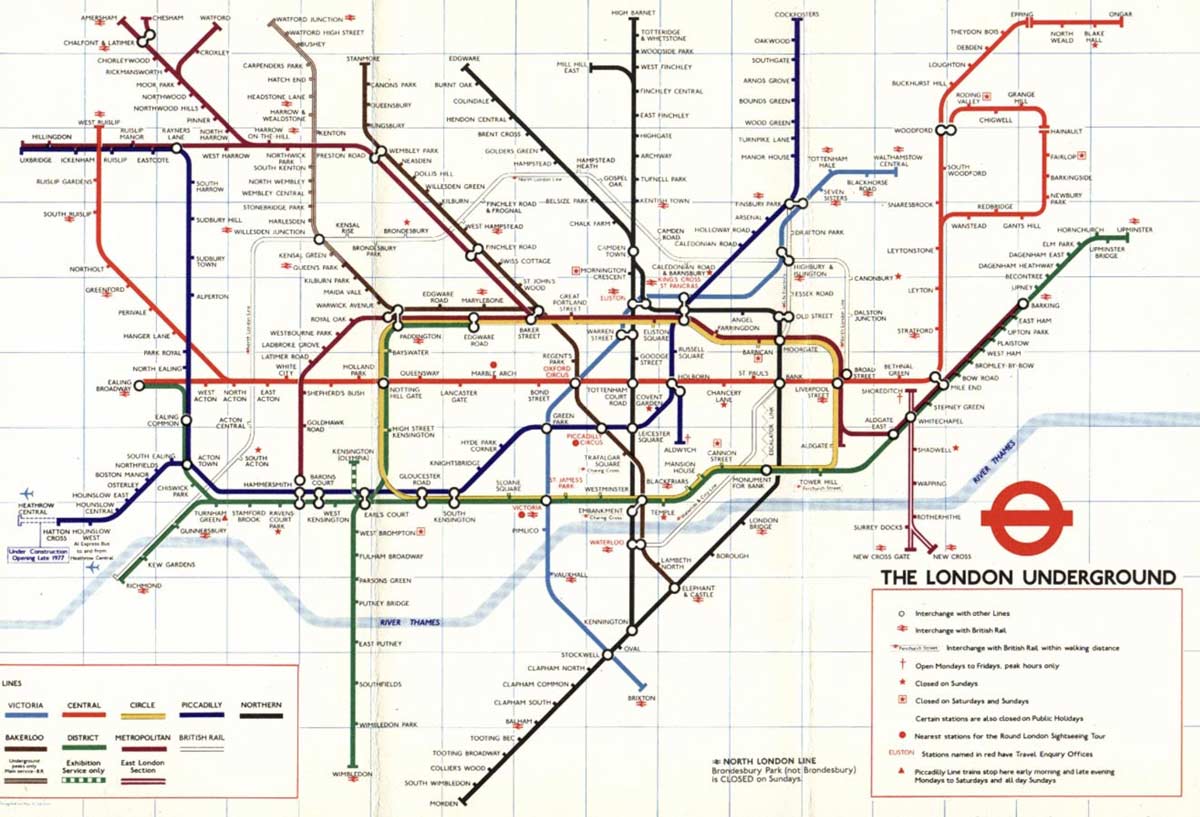 The look of the Underground map would not change much in the coming years, with the main additions being new stops, most notably to Heathrow Airport. The Victoria line was finally opened in 1968, with the Jubilee line following in 1979. 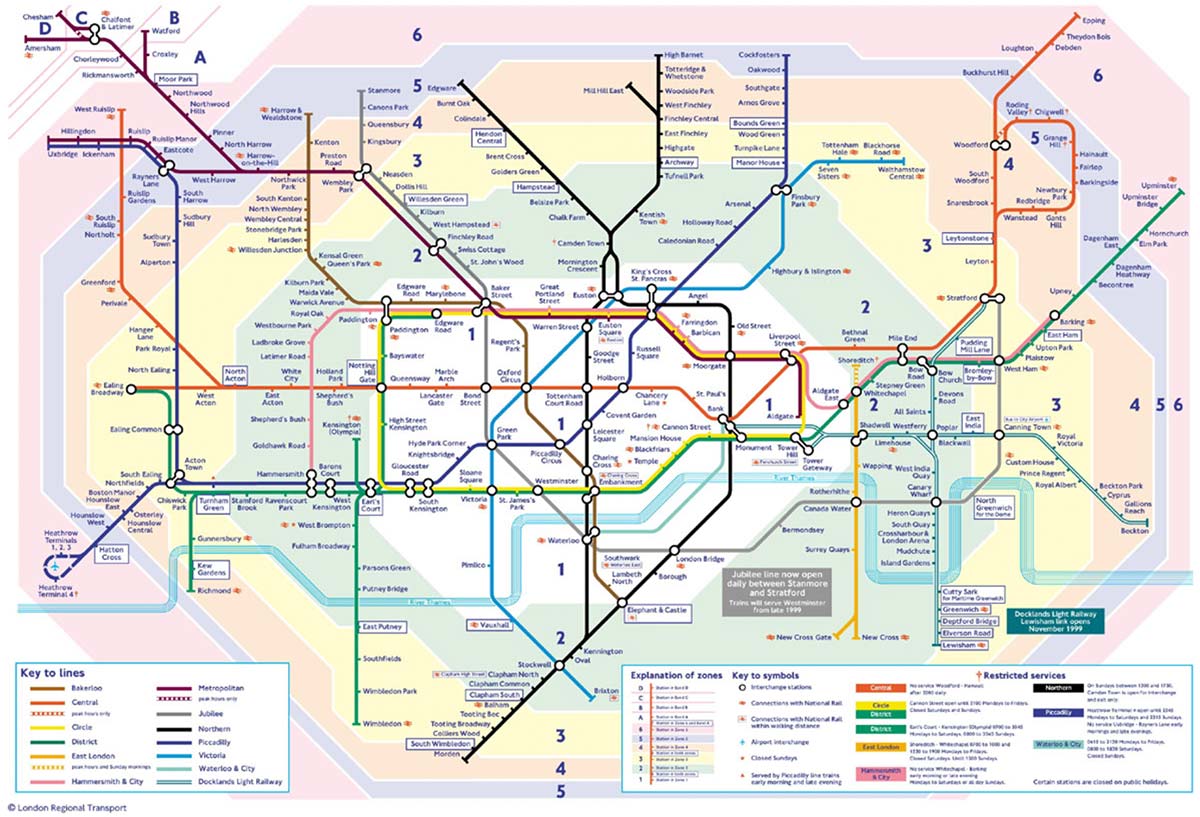 In 1981, the London Underground shifted its pricing model to revolve around zones, hence Tube maps began to reflect these new pricing boundaries. The Jubilee line was also expanded substantially in 1999, extending its eastern terminus to Stratford. 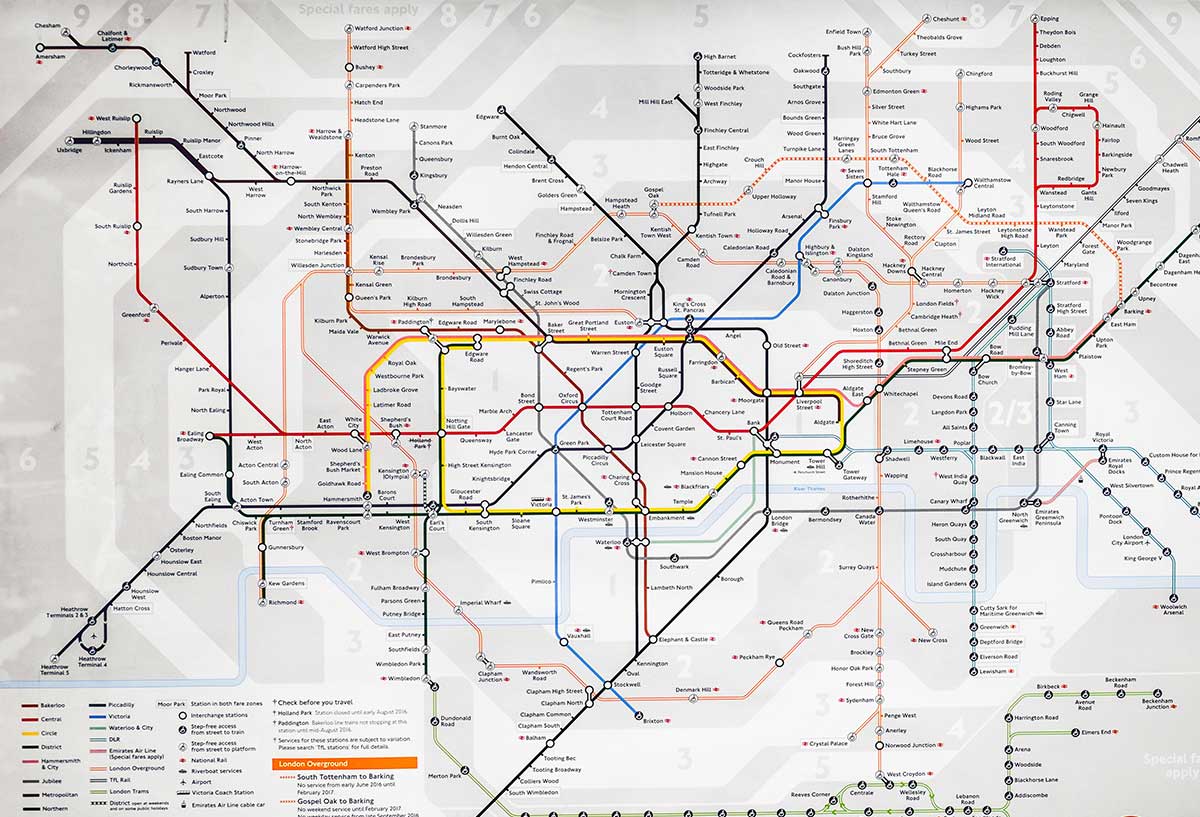 The Tube map continues to grow and change in the 21st century. Its newest addition is the long-awaited Elizabeth line – named in honour of Queen Elizabeth II – which was originally due to open in May 2015 but was delayed until May 2022. Stretching more than 100km from Reading and Heathrow in the west to Shenfield and Abbey Wood in the east via central London, the Elizabeth line has precipitated yet another update to the London Underground map.