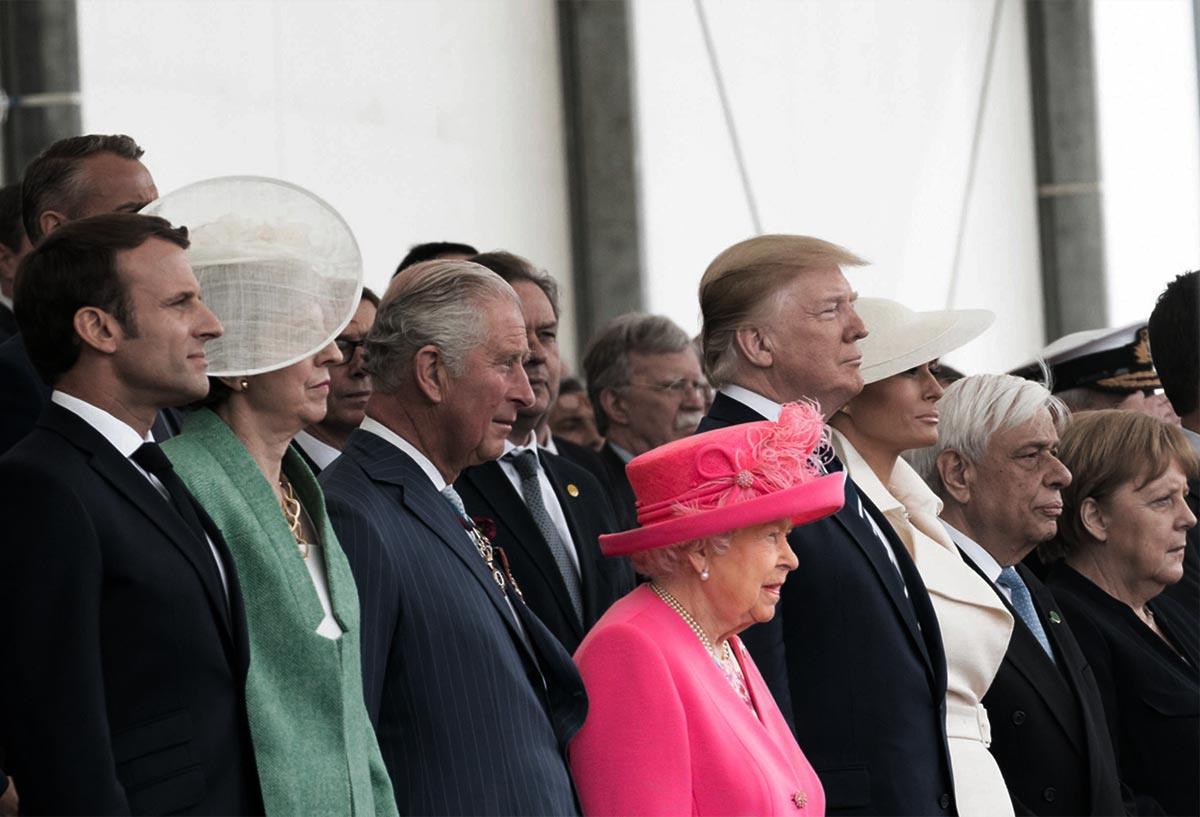 As the former head of state of the United Kingdom, Her Majesty Queen Elizabeth II met an impressive number of world leaders throughout her 70 year long reign, including 15 British Prime Ministers, ranging from Winston Churchill to Liz Truss, and 13 US Presidents. During the Cold War, she hosted both allied representatives and guests from the other side of the Iron Curtain. She was one of the most travelled monarchs in British history, paying a visit to every continent in the world (except Antarctica).

Here are key figures that Queen Elizabeth met over the years, from Winston Churchill to Indira Gandhi, Mikhail Gorbachev to Donald J. Trump. 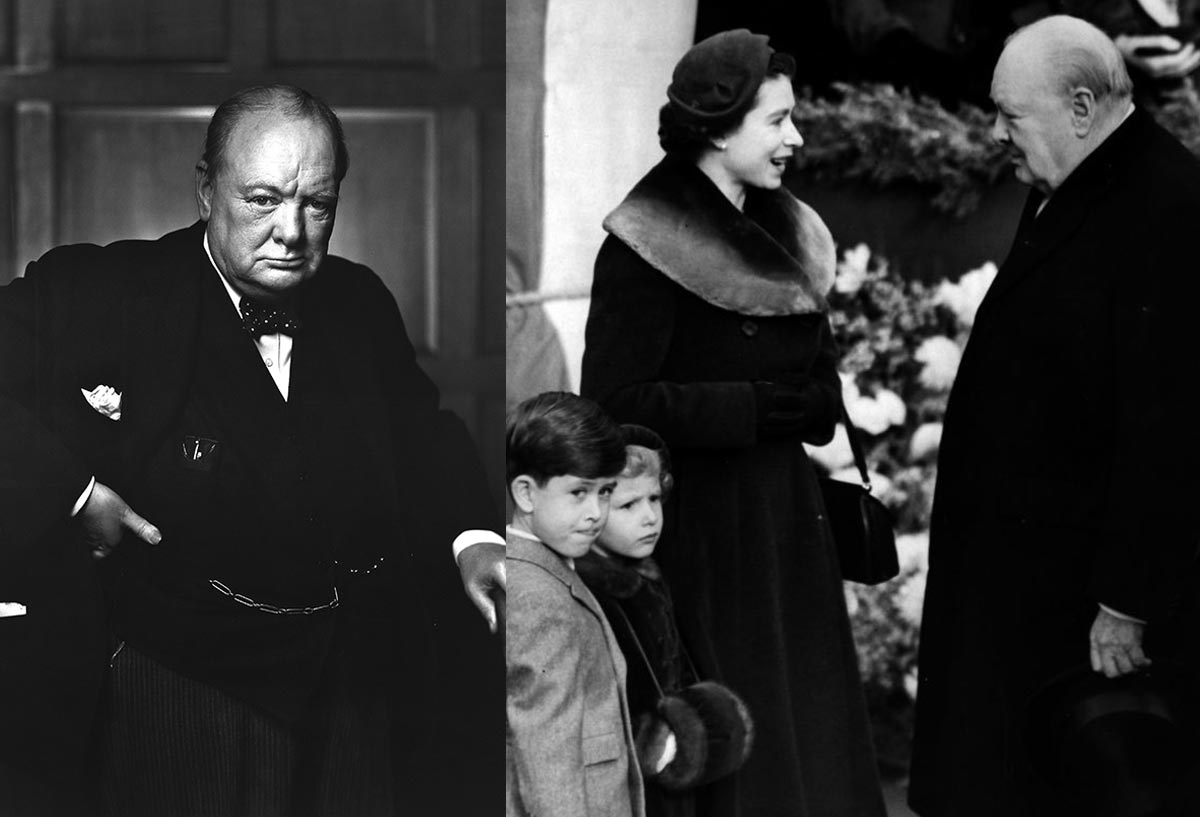 Winston Churchill served as the Queen’s first Prime Minister from 1951 to 1955. They both met for the first time when Elizabeth (then princess) was two years old. The Queen wrote a personal handwritten letter to Churchill when he decided to retire from his role as Prime Minister. 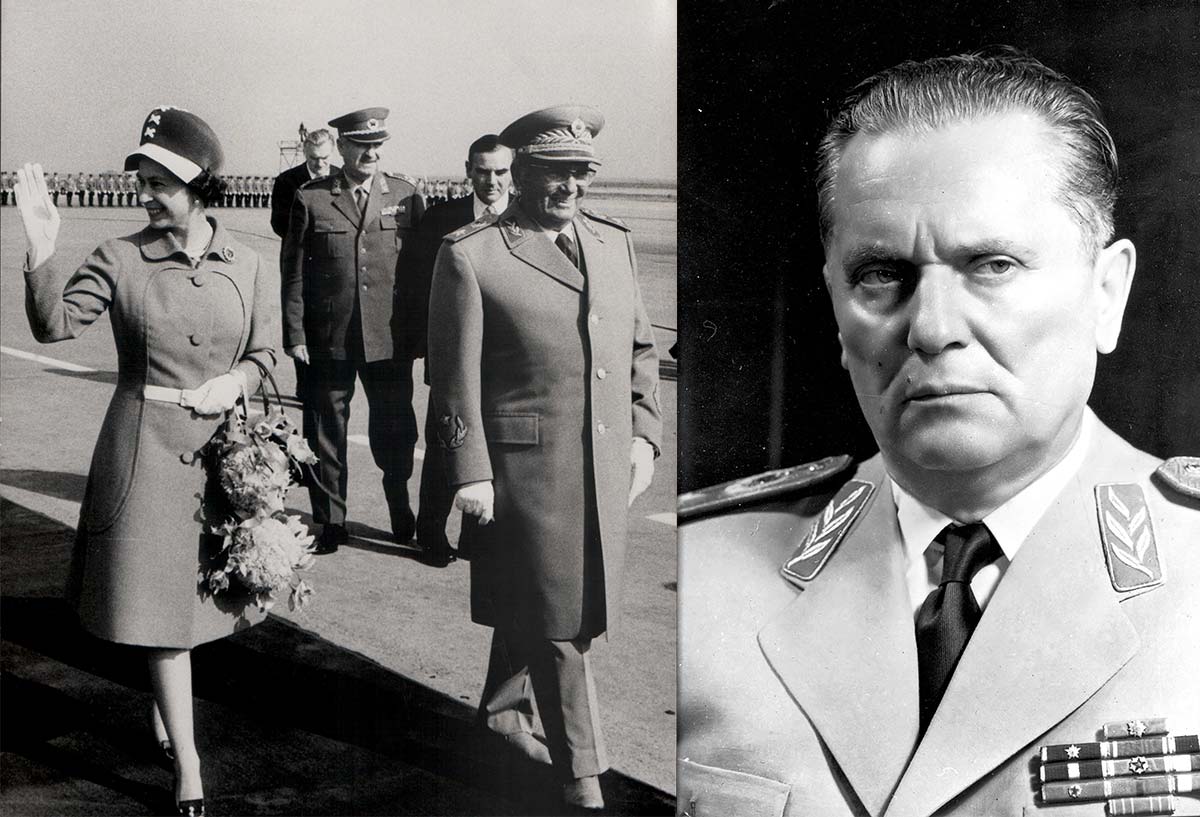 On 16 March 1953, the Yugoslavian leader Josip Broz Tito visited Buckingham Palace – the first time following the end of World War Two that a communist leader travelled to a Western country. 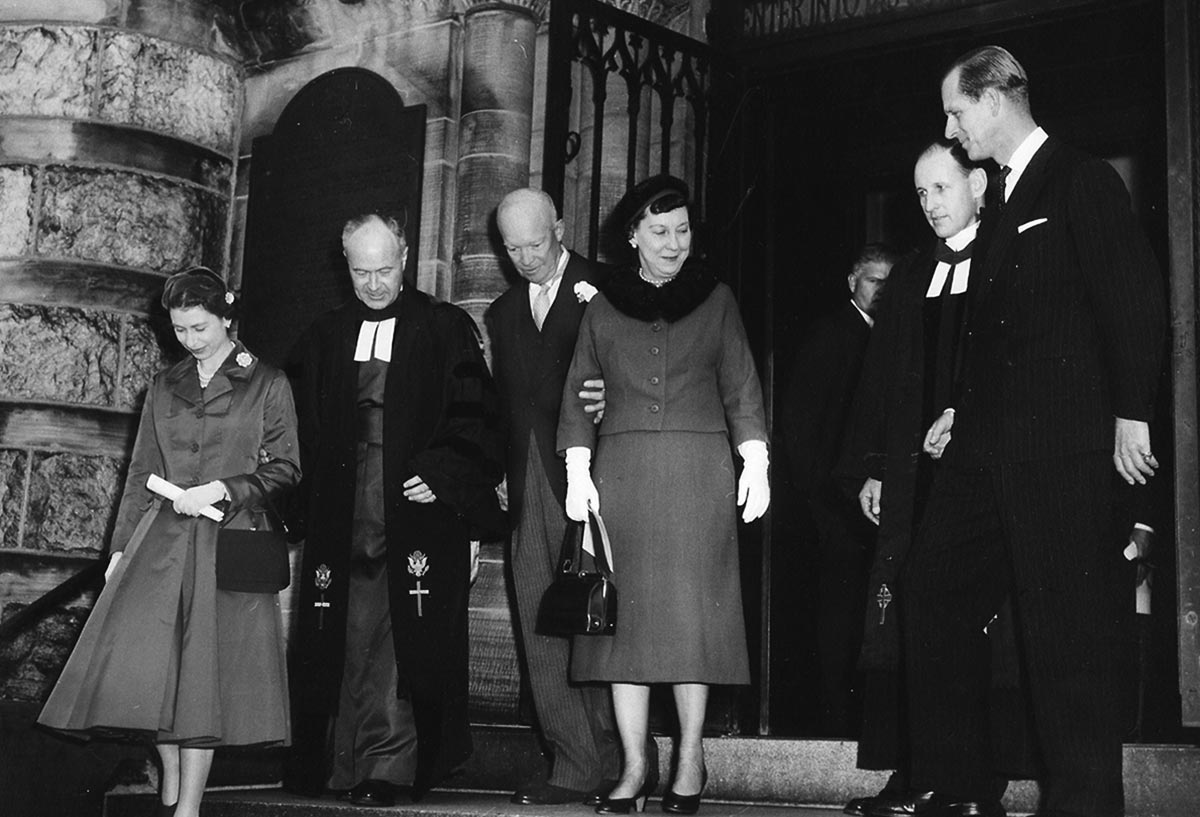 The US President and the First Lady accompany the British royal family on a visit to the National Presbyterian Church, 1957

In 1953 Dwight D. Eisenhower was sworn into office as the President of the United States of America. He became the first US leader who met the Queen during her reign. Elizabeth II had made acquaintance with President Truman when she was still a princess in 1951. 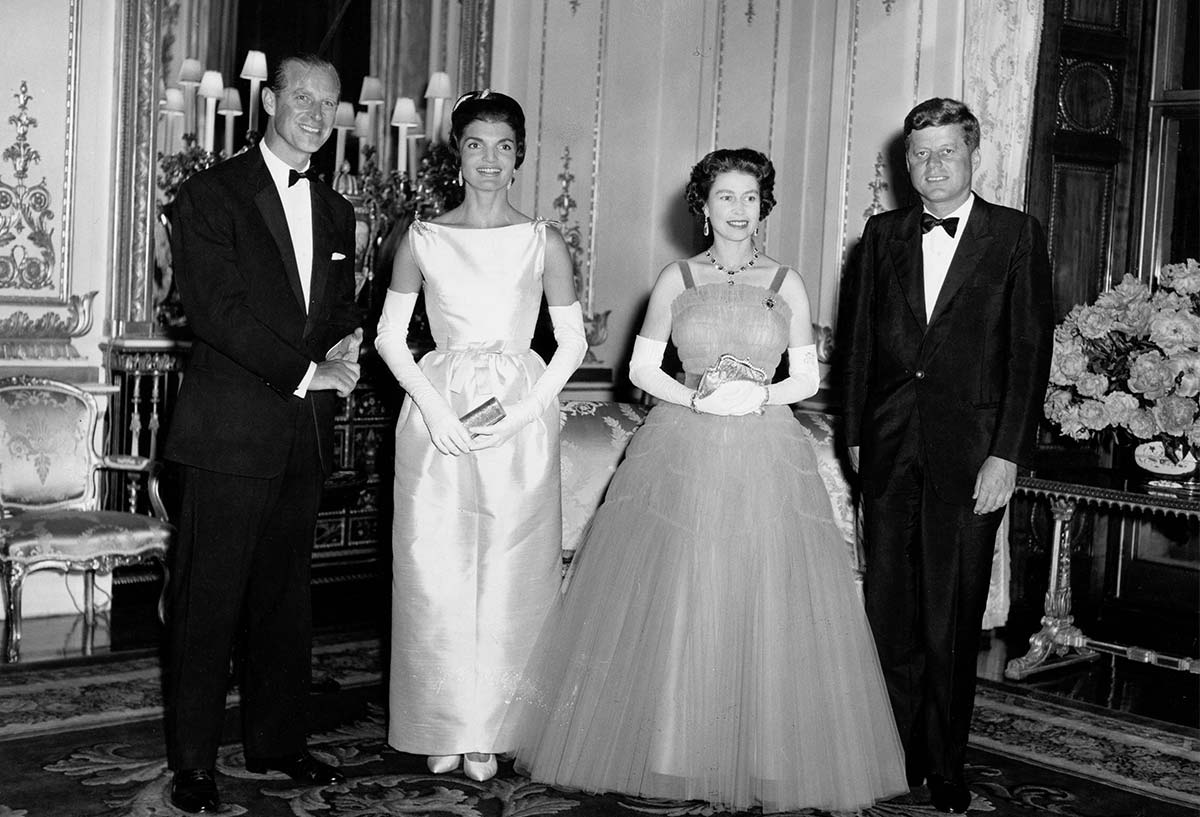 The Kennedys with The Queen and Prince Philip, Duke of Edinburgh, 1961

John F. Kennedy served as the 35th President of the United States from 1961 until his death in 1963. He and his wife Jacqueline Kennedy (later Onassis) visited Buckingham Palace in June of 1961. 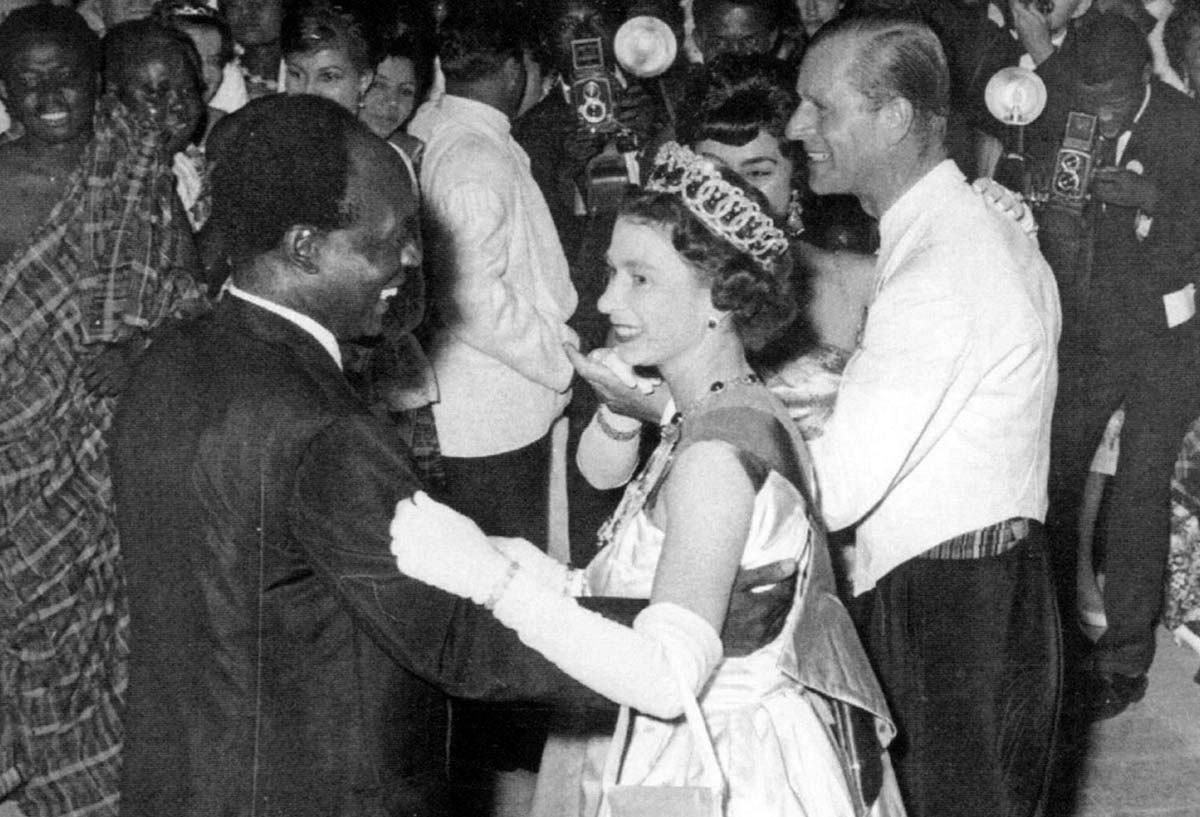 The Queen has kept a close relationship with the countries in the Commonwealth of Nations, mostly comprised of former British colonies. One of these is the West African state of Ghana, which gained its independence in 1957. Elizabeth II decided to visit the country in 1961, which famously culminated in a dance between her and the President of Ghana Kwame Nkrumah. 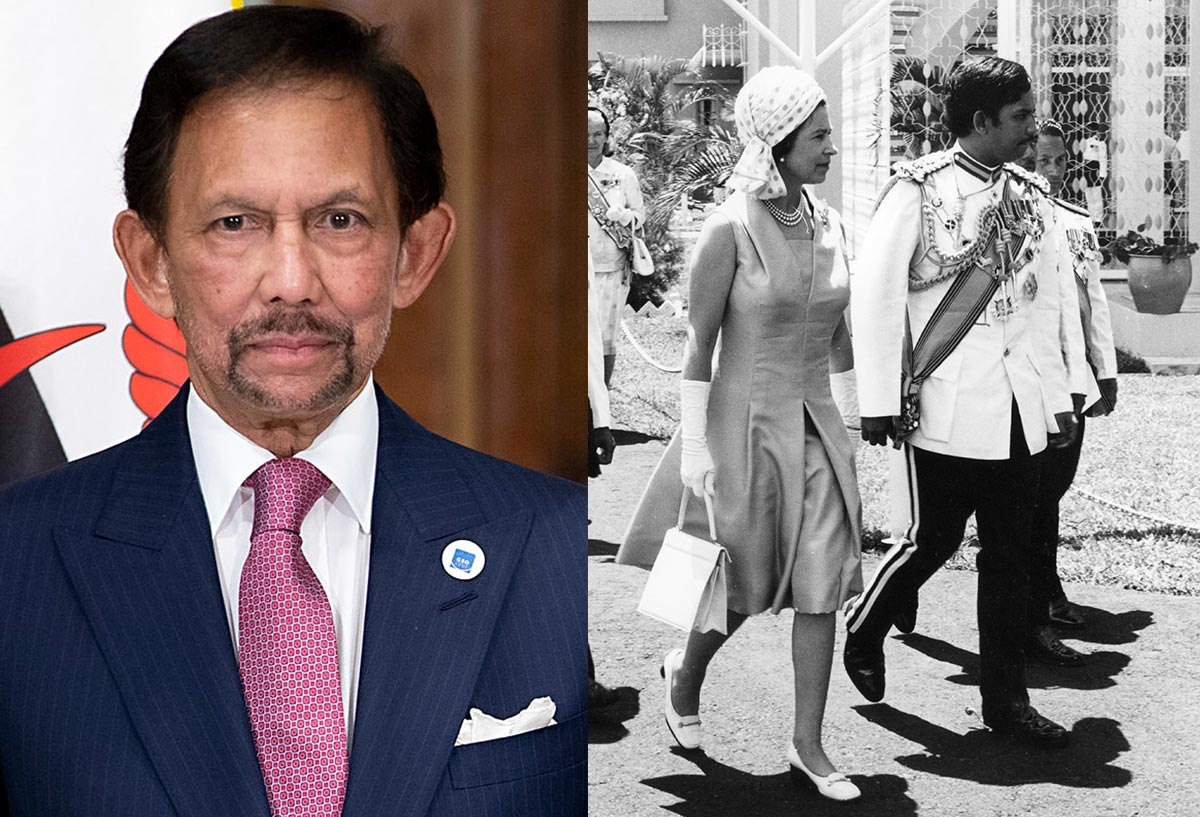 The Sultan of Brunei is one of the few absolute monarchs in the world. Hassanal Bolkiah met the Queen during her state visit to Brunei in 1972. 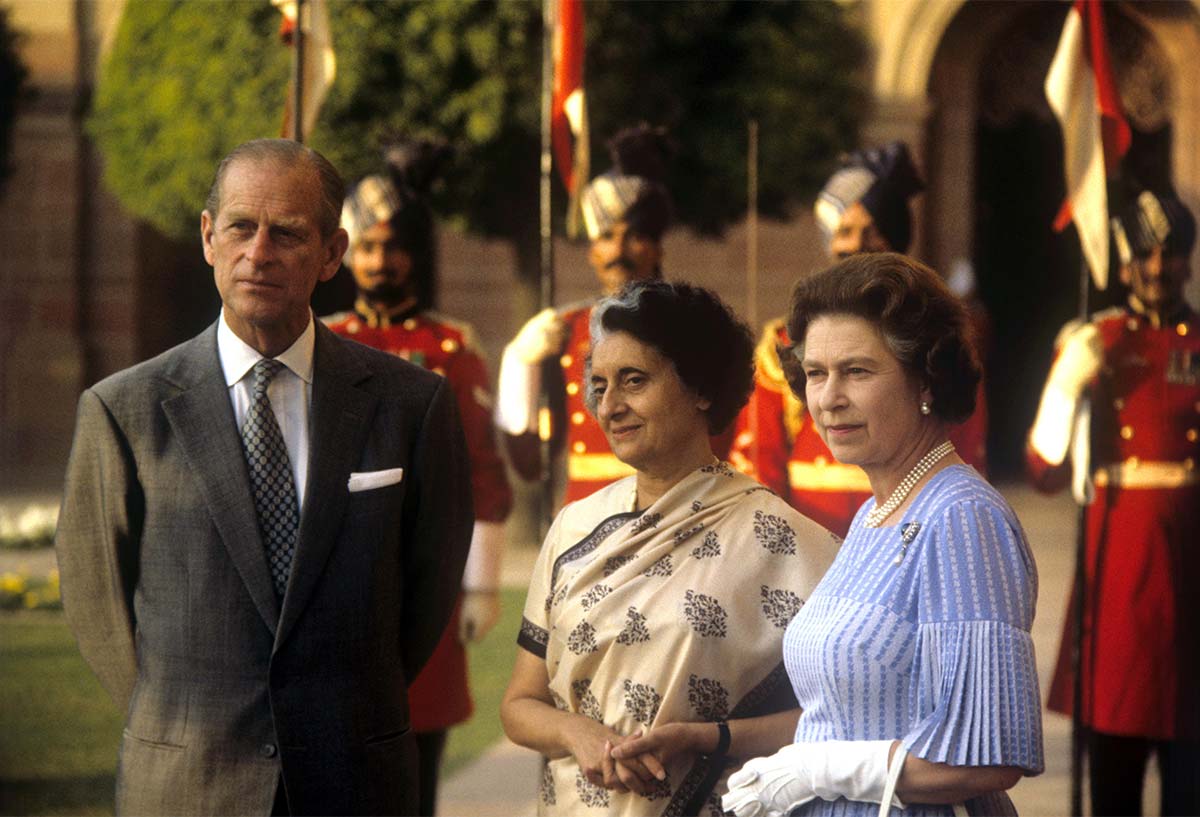 Indira Gandhi served as India’s 3rd Prime Minister from 1966 to 1977 and from 1980 until her assassination in 1984. She was the daughter of Jawaharlal Nehru, the 1st Prime Minister of India and the wife of Feroze Gandhi (no relation to Mahatma Gandhi). 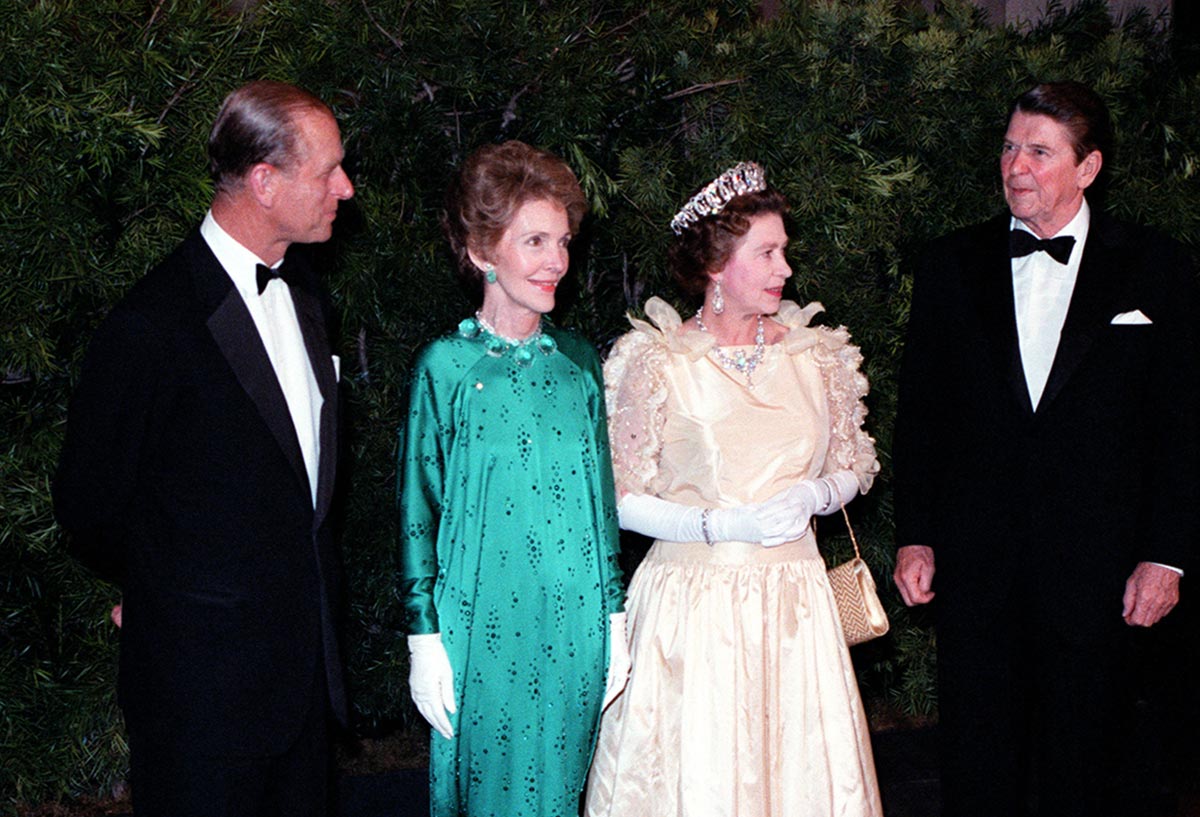 Queen Elizabeth II and Prince Philip stand with President and Mrs. Reagan during a state dinner. The Queen was on a tour of the West Coast of the United States.

US President Ronald Reagan and the Queen shared a love for horses, with both of them riding together during Her Majesty’s visit in 1983. Elizabeth II made the US President laugh with a joke about the Californian weather during a dinner. 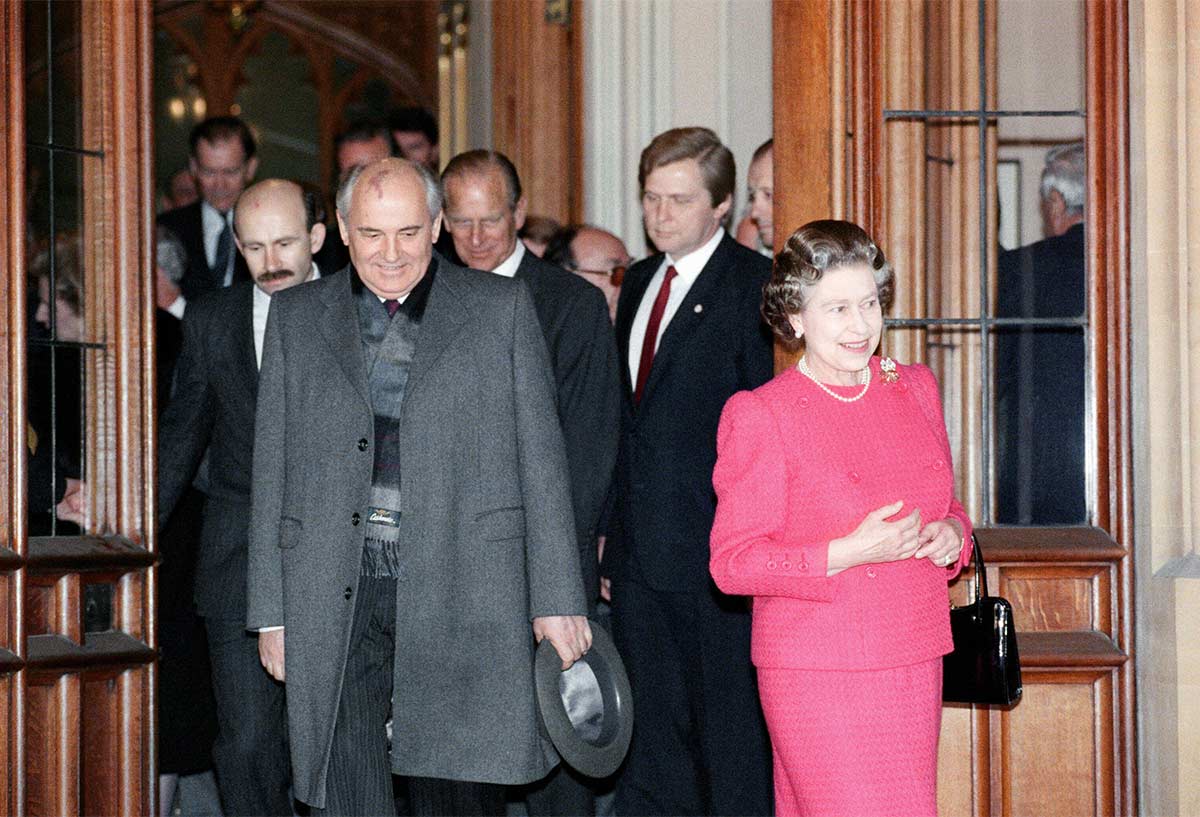 Mikhail Gorbachev was the last leader of the USSR, overseeing the programs of glasnost and perestroika. His time as the General Secretary of the Communist Party of the Soviet Union oversaw the fall of the Berlin Wall and the warming up of relations with the West.

The Queen met Gorbachev and his wife in Windsor Castle during his visit to the United Kingdom in 1989. He also engaged in talks with the then British Prime Minister Margaret Thatcher.

Queen Elizabeth II speaks with French President Francois Mitterrand during a dinner at the Guildhall on 4 June 1994. The dinner was one of a series of events marking the 50th anniversary of the D-Day landings.

François Mitterrand was one of the French presidents who enjoyed the most contact with the Queen. It is said that they got on very well and that the Queen enjoyed talking with him. Between 1981 and 1995, they met on several occasions, most notably at the creation of the European Union in 1992, and at the opening of the Channel Tunnel in 1994. 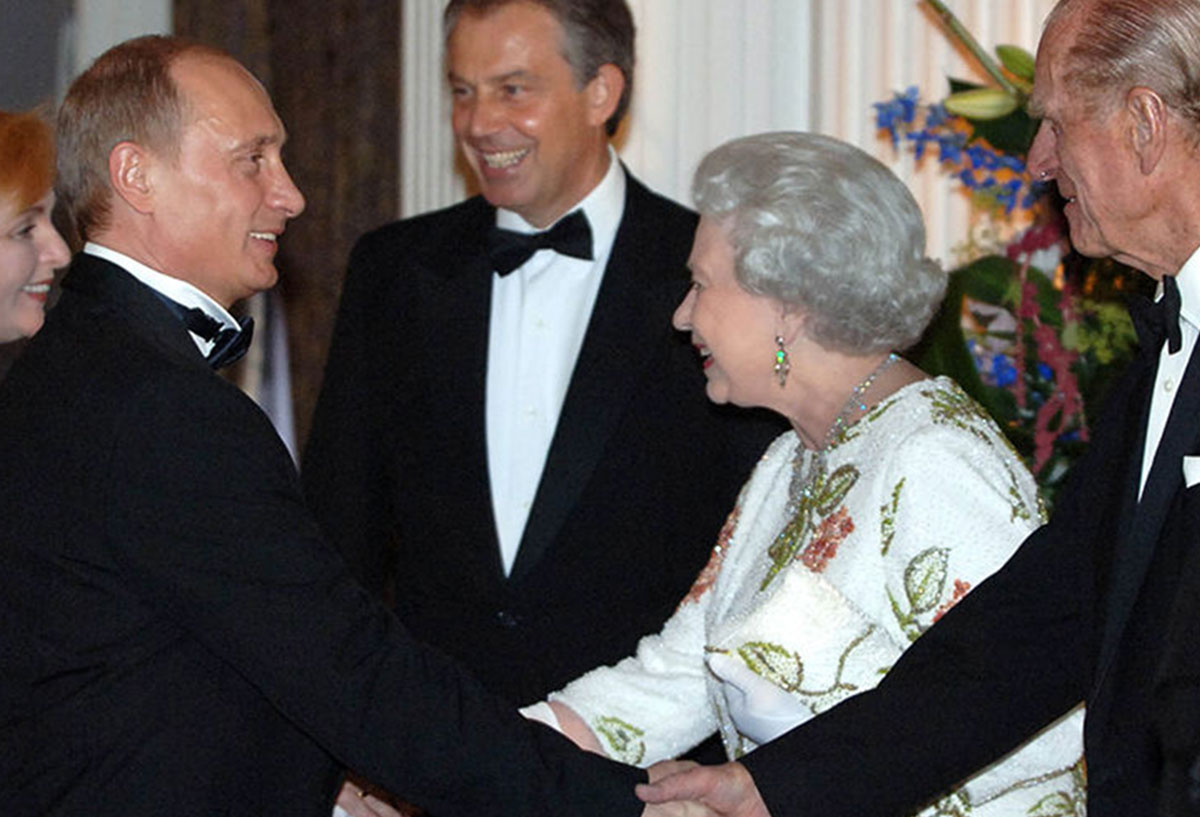 Elizabeth II met Russian President Vladimir Putin in 2003 during his state visit to the United Kingdom. He allegedly broke Royal protocol by being 15 minutes late for his meeting with the Queen. 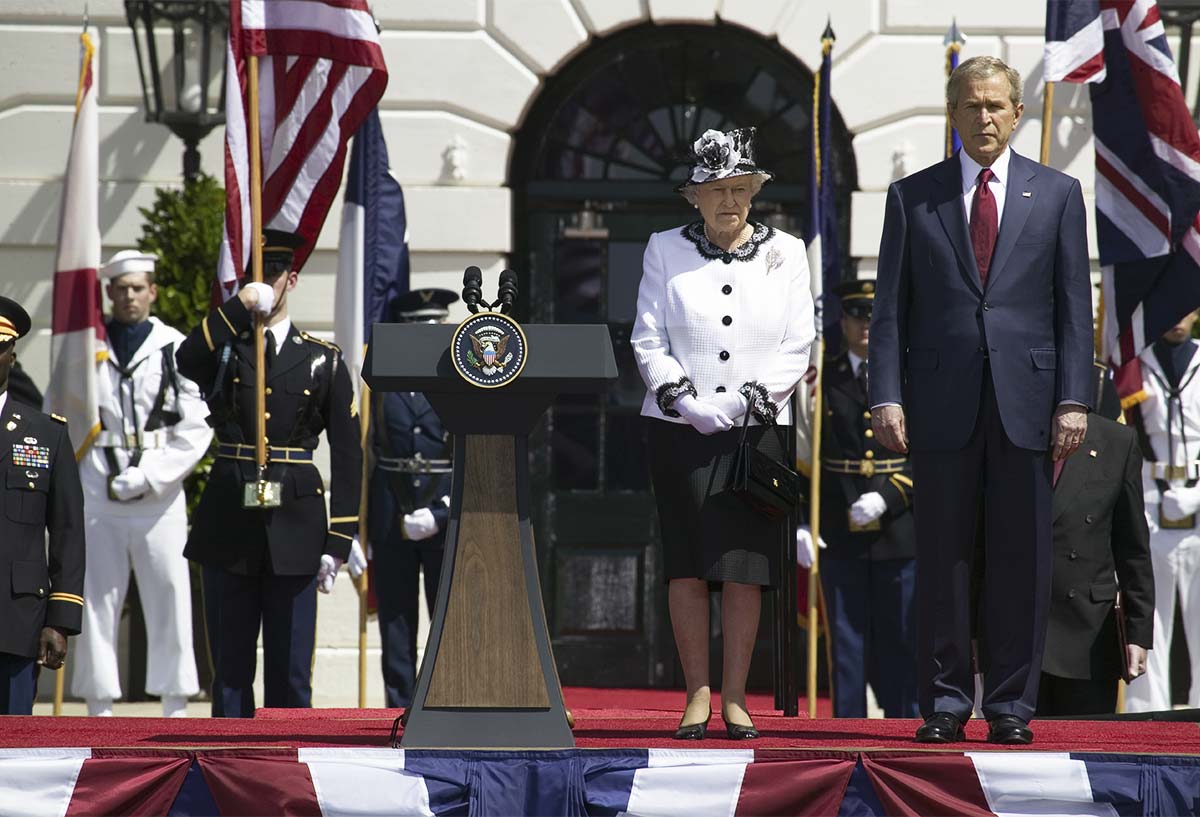 The Queen met the 43rd US president for the first time in 2001 during his visit to London. George W. Bush led the US during some of its most turbulent times following the 9/11 terrorist attacks.

This picture shows the Queen’s visit to the United States in 2007 to celebrate the 400th anniversary of the founding of Jamestowne. President George W. Bush and First Lady Laura Bush hosted Elizabeth II and Prince Philip in the White House. 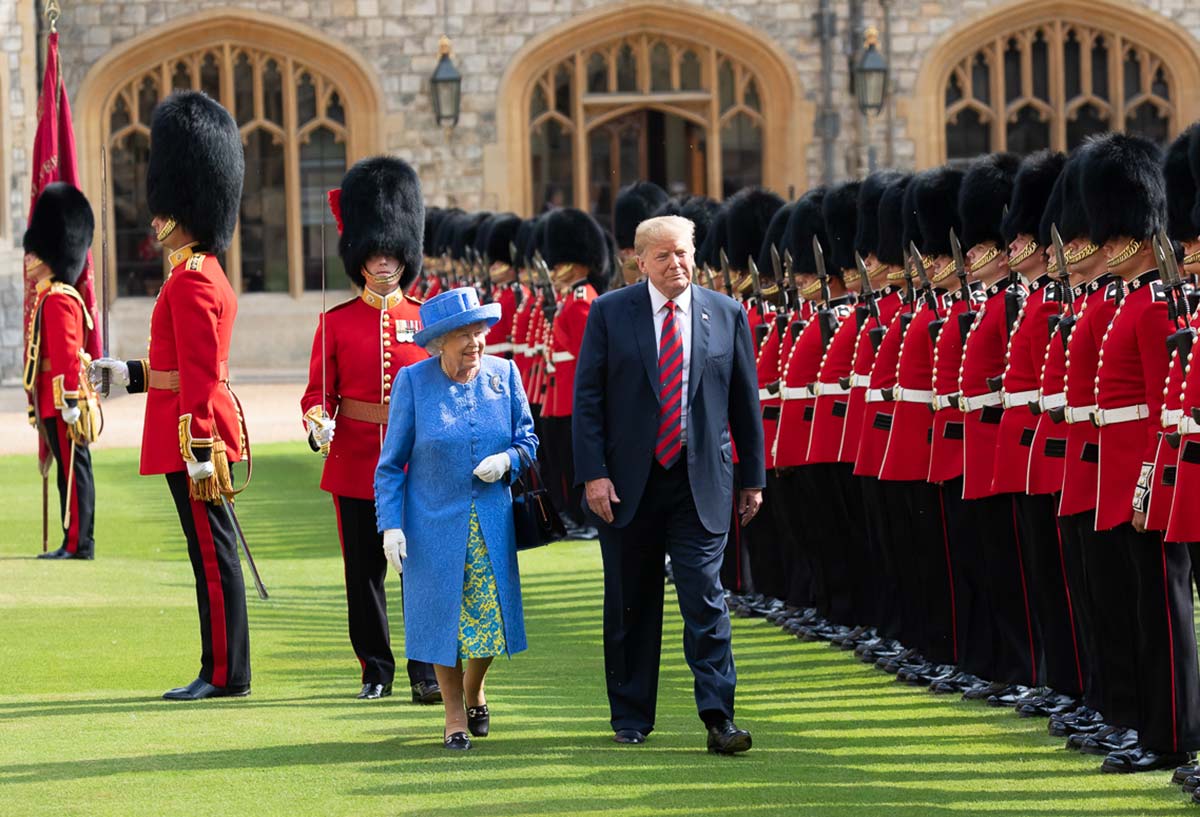 The 45th US president paid an official visit to the United Kingdom in July 2018, where he was greeted by the Queen. It was Donald J. Trump’s first time meeting the British head of state. As pictured, while at Windsor Castle, Trump broke royal protocol by walking in front of the Queen as they inspected the Guard of Honour. 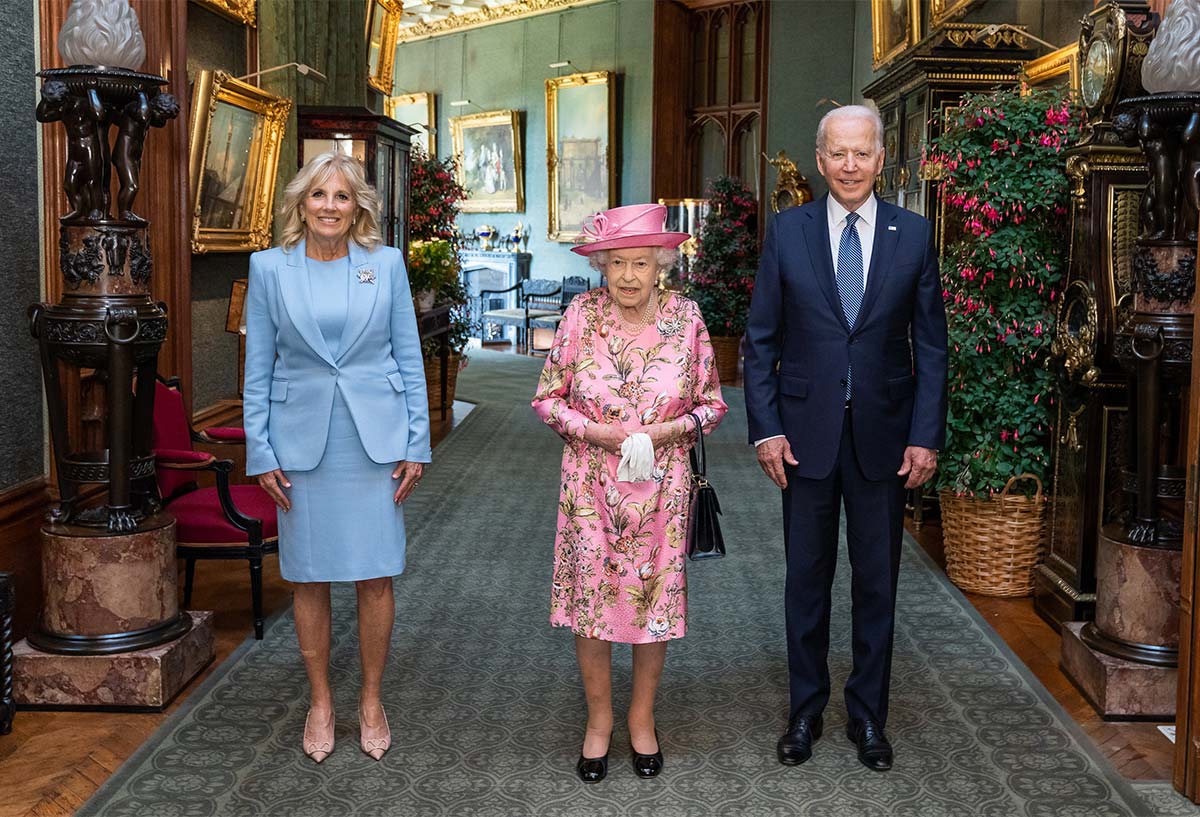 President Joe Biden and his wife Jill had tea with the Queen at Windsor Castle in June 2021 following the G7 summit in Cornwall. The visit came just two months after the death of the Queen’s husband, Prince Philip.