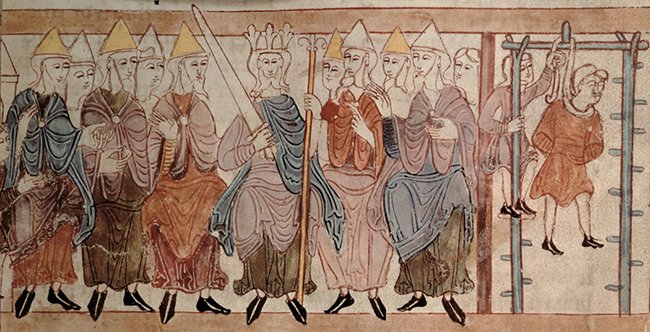 In the wake of Rome’s withdrawal from Britain in 410 AD the political situation was unstable. No one really had a claim to any particular piece of land. Therefore the person with the biggest army, or more accurately, the largest group of fighting men was able to hold the bigger, more desirable pieces of land. Eventually though some semblance of a political structure grew and boundaries were drawn.

By 650 AD a sporadic patchwork of small kingdoms had been established by strong chieftains who at this point had taken to calling themselves kings of their respective micro-kingdoms. These kingdoms were Bernicia, Deira, Lindsey, East Anglia, Mercia, Wessex and Kent.

In time the smaller or less successful kingdoms were absorbed into the others, either through aggression, economic shift or by marriage until a simpler system was revealed. By the eighth century four kingdoms remained, Northumbria, Mercia, East Anglia and Wessex.

Northumbria was a region that stretched across the neck of northern England and covered much of the east coast and parts of southern Scotland. Modern York was at its southernmost border and Edinburgh at its north. It was formed in the seventh century upon the unification of Bernicia and Deira, the northern and southern parts of the kingdom respectively.

The kingdom was traditionally at odds with Mercia. Both consistently raided each others lands and sometimes launched full scale invasions in an attempt to subdue one another.

Mercia was a large kingdom that covered most of middle England. Its fortunes fluctuated as it was bordered on all sides by potentially hostile rivals. To its north, Northumbria, its west the Welsh kingdoms, traditional enemies of all Anglo-Saxons, to its east, East Anglia and to its south, the least aggressive of its neighbours, Wessex. It was often at war, mainly with Northumbria and Wales, but maintained a largely harmonious relationship with Wessex.

Wessex was an unstable, but fertile country that covered most of the south west. It was bordered by the Celtic kingdoms of Cornwall to its west, Mercia to its North and Kent to the East. As was the mode of the period Wessex was constantly at odds with its neighbours and actually dwindled as Mercia began to take some its lands before King Egbert rose to power in the 8th century.

Its economy and strength grew under Egbert with the acquisition of Surrey, Sussex, Kent and Essex. He took these lands, abolished the kingdom of Kent and established overlord-ship over Mercia and Northumbria. During his reign he established Wessex as the strongest, wealthiest, most civilised of all of the Anglo-Saxon kingdoms.

East Anglia was the smallest of the Anglo-Saxon kingdoms, but powerful during the reign of the Wuffingas dynasty. By the end of the eighth century however, it had been subdued by the more powerful Mercia. East-Anglia briefly reclaimed their independence in the ninth century, but it was swiftly conquered and settled by Danish Vikings.

These kingdoms survived for many years, though their borders were often subject to change. Towards the end of the ninth century the whole of Anglo-Saxon Britain faced immense upheaval in the form of invaders from the north, the Vikings. Their invasion would set in motion a series of remarkable events that would bring an end to the separate Anglo-Saxon kingdoms and bring forth one single united Angle-Land.