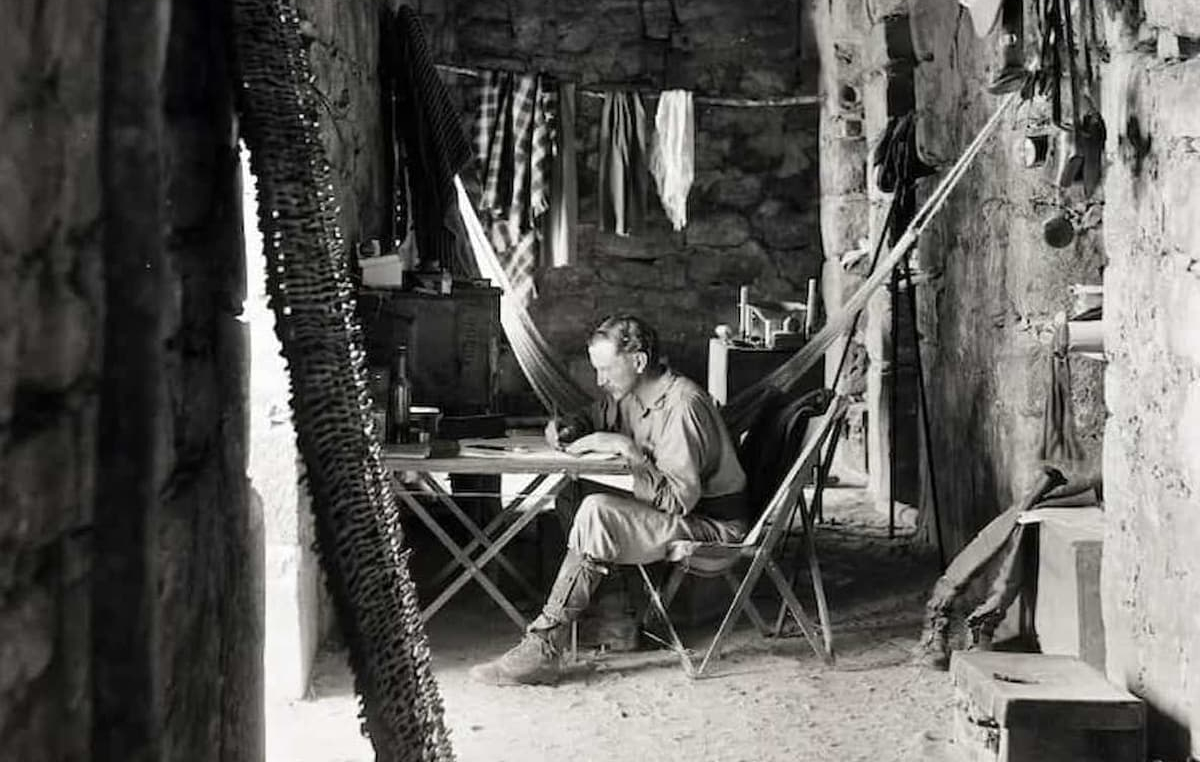 After the mysterious collapse of Maya civilisation, many of their cities were left to ruin, eventually being reclaimed by the jungle. In the late 19th century, a young British colonial officer, Alfred Maudslay, decided to leave his job and explore the ruins of Mesoamerica.

He was not unusual in this: many young men found themselves drawn to the legends and romance of cities lost to the jungle. He was, however, unusual in that unlike his contemporaries, he meticulously recorded what he found through pioneering photography, plaster casts and, later, papier-mâché.

It is in large part thanks to Maudslay’s foresight that we have visual and physical evidence of Maya civilisation that otherwise may have been lost to treasure hunters or nature.

Photograph of Alfred Percival Maudslay on a mule in Quiriguá, Guatemala, c. 1890.

Tikal was one of the most important ceremonial and administrative centres in the Peten basin: its reach and influence extended possibly as far as Tenochtitlan, the Aztec capital in Mexico, and it was certainly a powerful city-state which dominated the Peten basin for centuries.

Whilst the ceremonial heart of Tikal has been thoroughly excavated, the majority of the area it would have encompassed remains largely unexplored.

When Maudslay arrived at Tikal in the early 1880s, the major buildings were still mostly subsumed by jungle foliage. 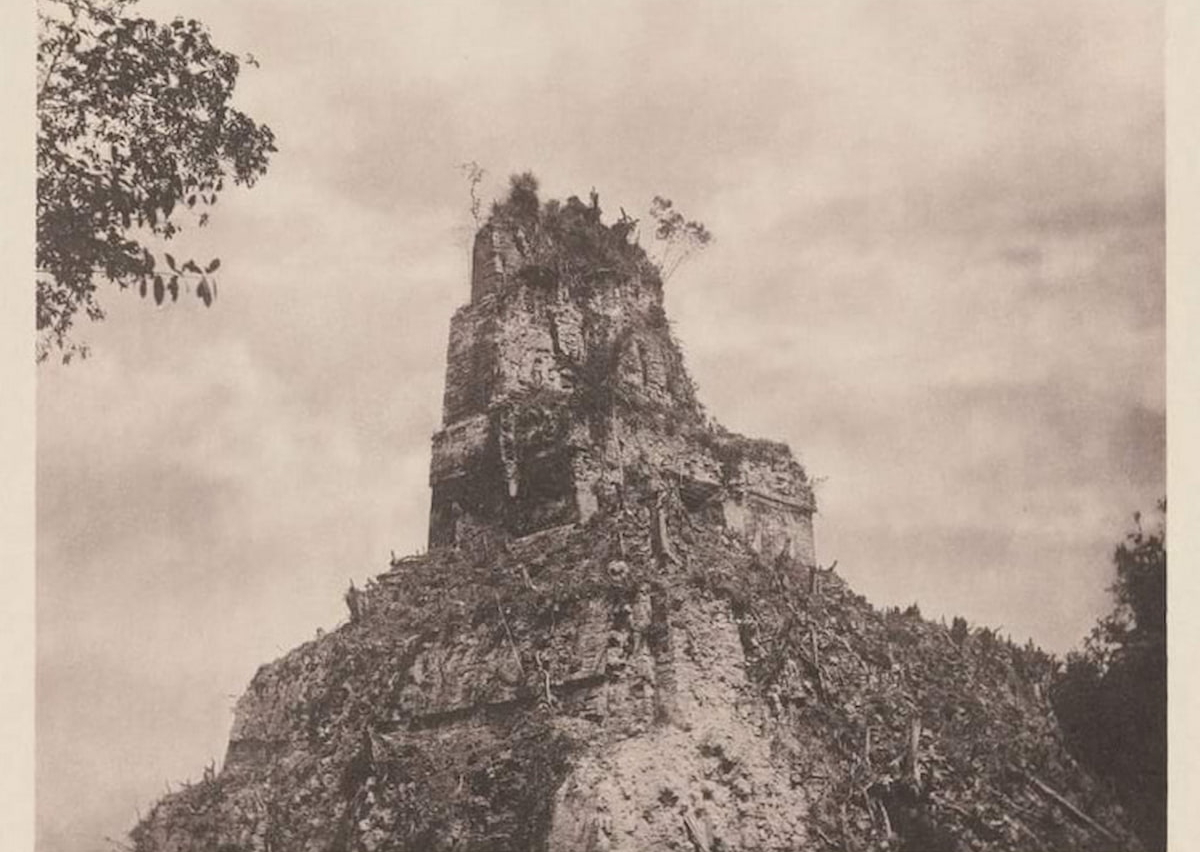 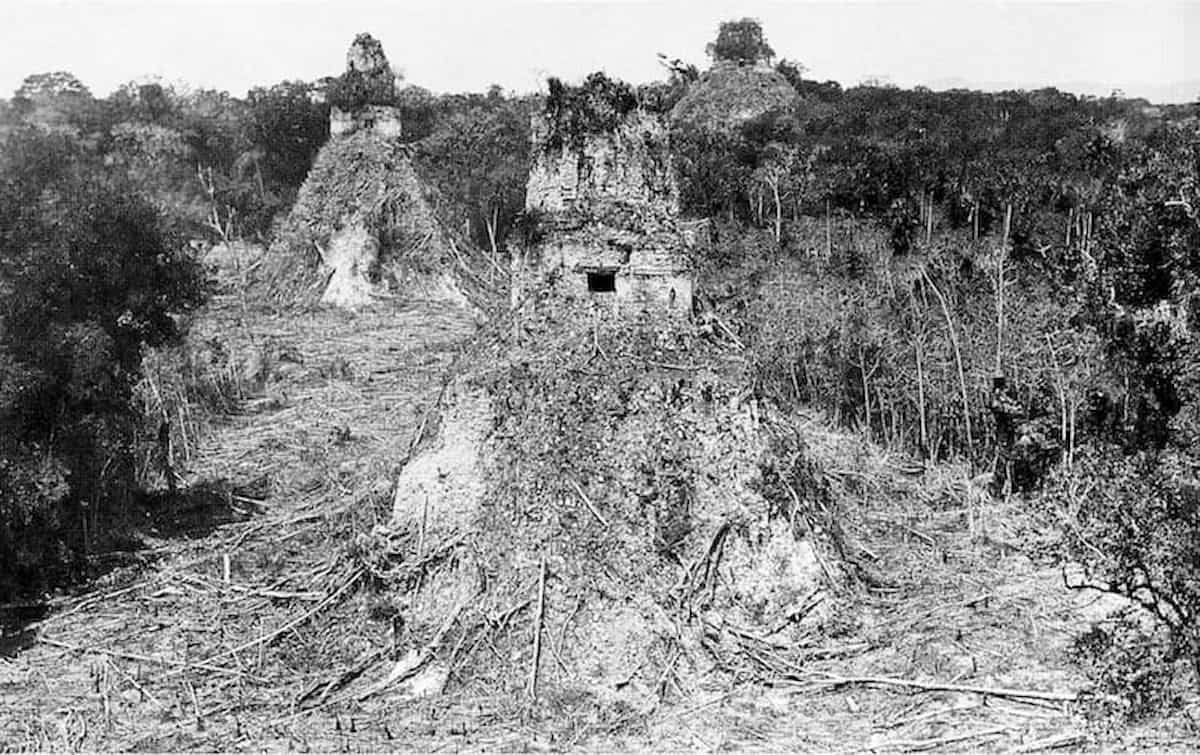 An 1882 photograph of the main plaza at Tikal, Guatemala. Taken by Alfred Maudslay. 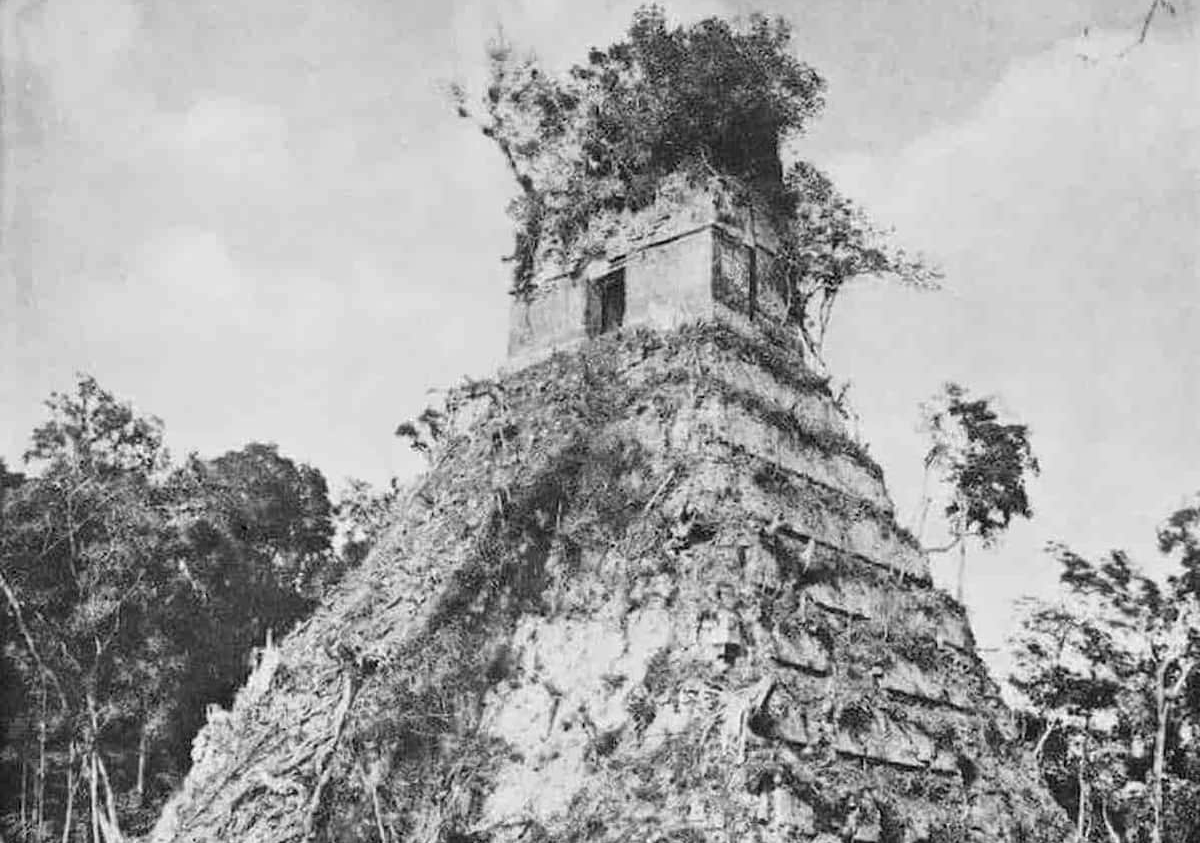 Templo I (Temple of the Grand Jaguar) at Tikal, photographed by Alfred Maudslay in 1896. Later excavations uncovered a wealth of burial goods linked to the tomb of Ah Cacao, one of Tikal’s rulers.

Palenque, in modern-day Mexico, was a Maya city inhabited from around 100 BC. It reached its peak in the 7th century and was abandoned around 900 AD. Although locals knew of the existence of the ruins, they were largely ignored for centuries.

European explorers began to take notice of Palenque again in the mid-19th century: the French explorer Désiré Charnay visited first, and it was from him that Maudslay learnt the art of papier-mâché.

Maudslay arrived at Palenque in 1890 and took extensive photographs and made sketches of all the art, architecture and inscriptions he could find. His investigations at Palenque were seen as setting the standard for future investigators and explorers to follow. 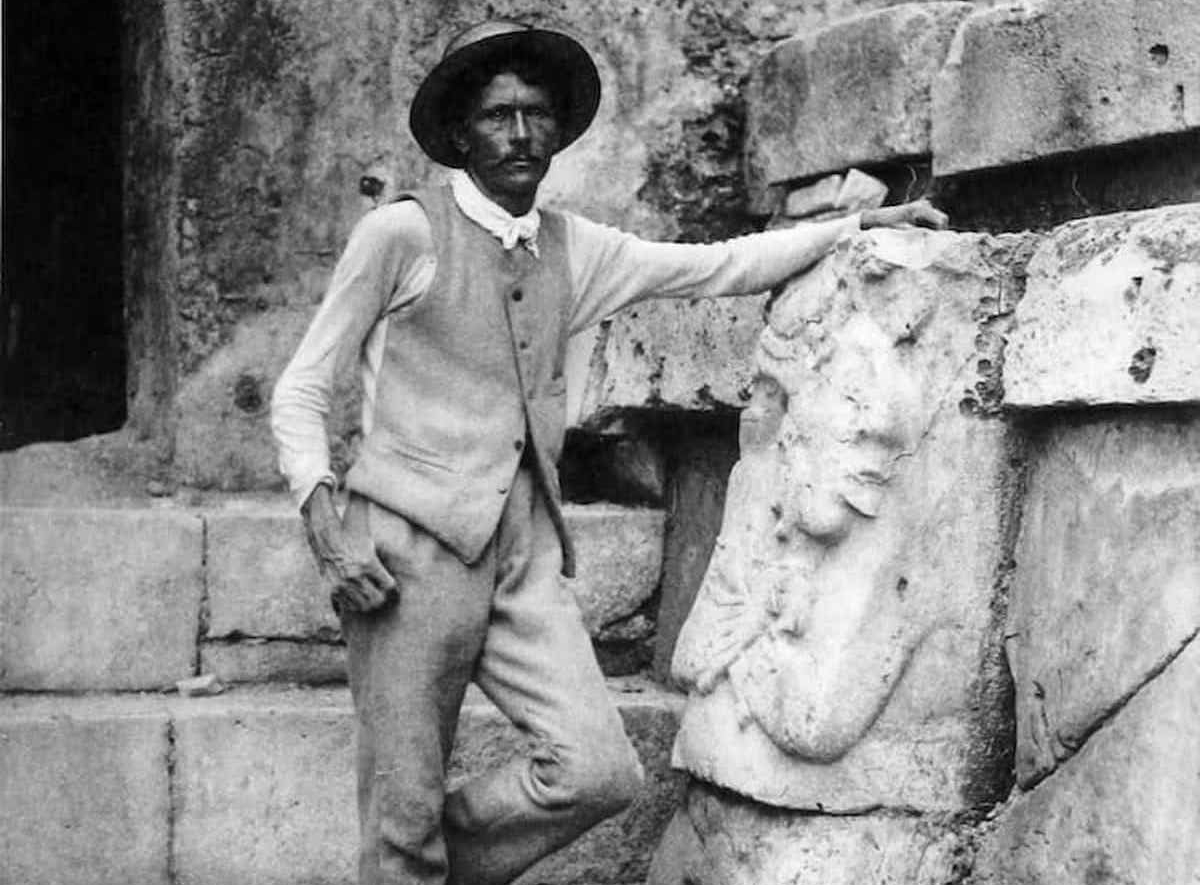 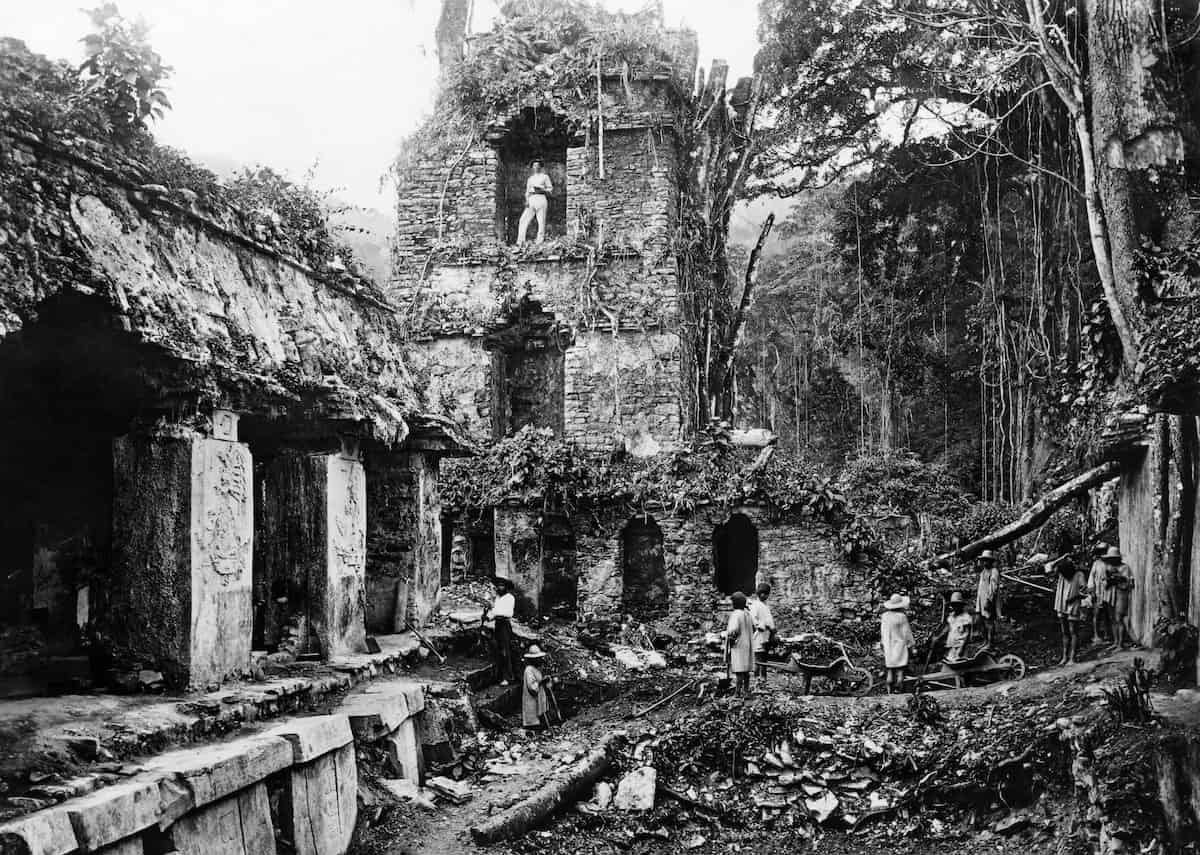 An 1880s photo of El Palacio at Palenque. El Palacio (the palace) was a complex of ceremonial, bureaucratic and social buildings used by the ruling elite.

Maya stelae are one of the greatest sources of information historians and archaeologists have about Maya society. They were essentially low relief sculptures and monuments, commemorating a king’s deeds and glorifying his reign as well as marking the end of calendrical cycles.

They varied from site to site and region to region, but all would have been painted with bright colours and were associated with the idea of divine kingship.

“The Great Turtle P, The South Face and East Side” from Quiriguá. Photographed in 1883 by Alfred Maudslay. 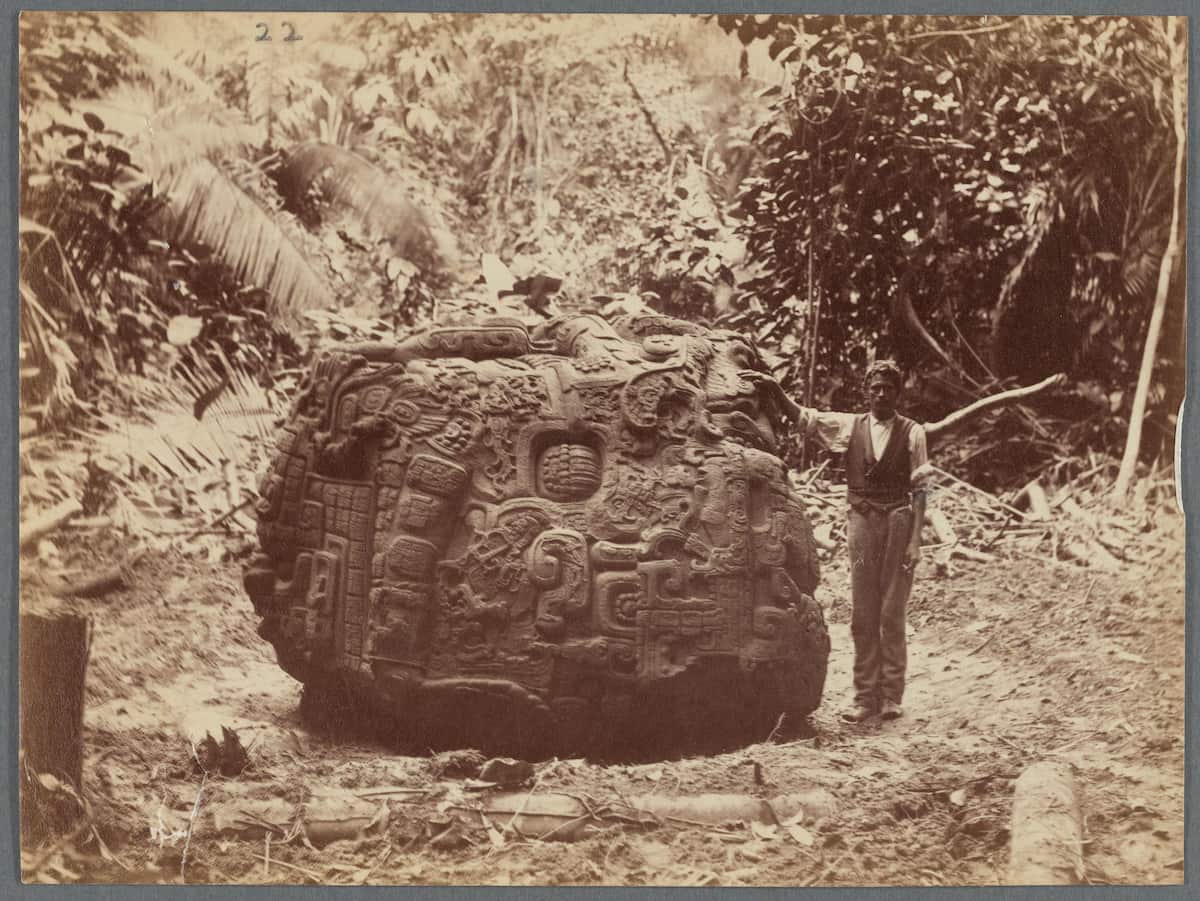 Black and white photograph (c. 1880-1899) of the Great Turtle stone sculpture at the Mayan ruins of Quirigua, Guatemala, by British explorer and archaeologist Alfred Percival Maudslay.