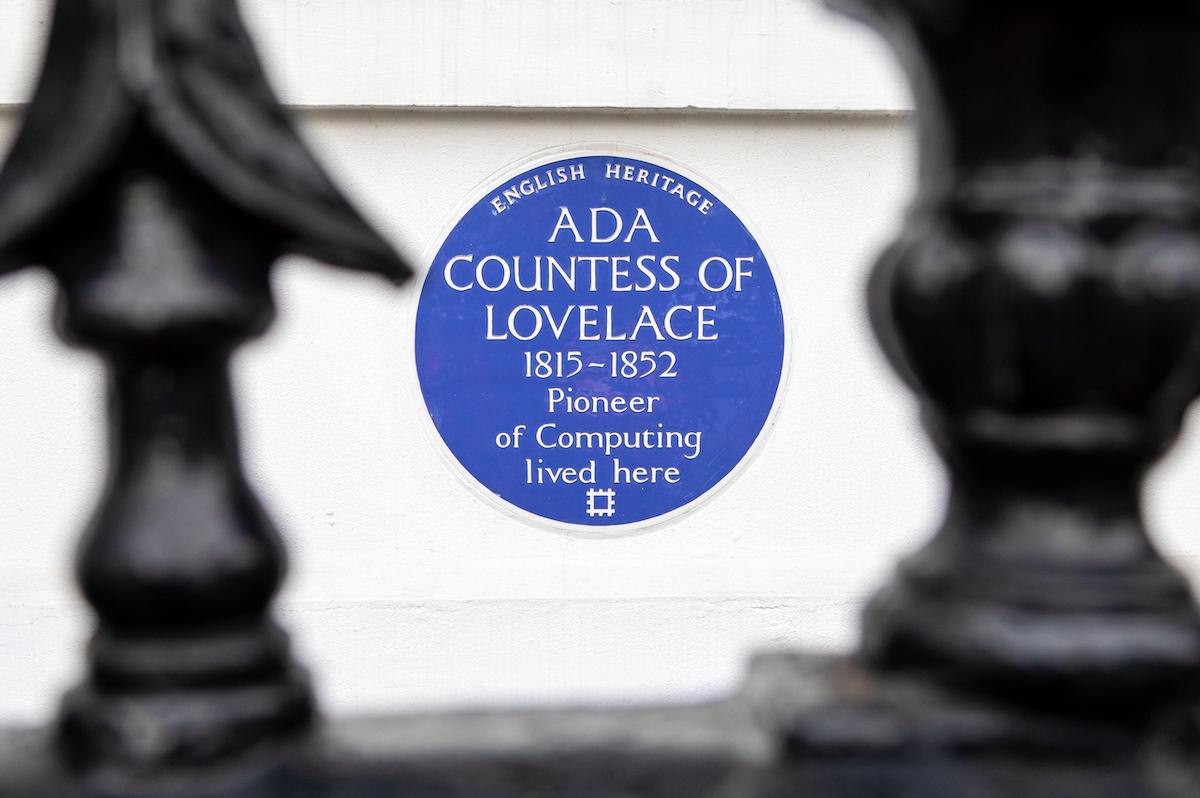 London is home to more than 900 blue plaques, erected by English Heritage to commemorate the city’s most influential former residents. Amongst those celebrated are mathematician Alan Turing, author Virginia Woolf and guitarist Jimi Hendrix.

In recent years, English Heritage has taken steps to address a gender imbalance in their blue plaques, of which there are substantially more dedicated to men than women. In 2020, for example, 6 of the 12 newly introduced plaques were installed in memory of former female residents of the city.

Despite this imbalance, trying to visit all of London’s plaques dedicated to women on foot would be an immense undertaking. Instead, we’ve devised a walk following a string of 9 blue plaques clustered around St James’s, Mayfair, Belgravia and Chelsea. Expect to witness odes to celebrated suffragettes, iconic movie stars and groundbreaking scientists.

This walk, which covers a little over 4.5 miles or 7 kilometres, should take around 1.5 to 2 hours to complete, depending on your pace and how much time you dedicate to each plaque.

Walking shoes on, cameras at the ready: here’s our tour of London’s blue plaques dedicated to pioneering women.

The tour begins on St James’s Square, home to a statue of William III, BP’s London headquarters and countless exclusive members clubs. Work your way around its perimeter, basking in the Georgian and neo-Georgian architecture, until you find number 12. Here you’ll spot the blue plaque dedicated to pioneering mathematician Ada Lovelace, who is widely revered as the first computer programmer in history.

Next, take King Street and then St James’s Street to Piccadilly. Head west past Green Park tube station, and take a right along Bolton Street. At number 11, you’ll find the plaque dedicated to novelist Madame d’Arblay, nee Fanny Burney, famed for her works Cecilia (1782) and Camilla (1796), which inspired both Jane Austen and Virginia Woolf.

Fair warning: this one isn’t blue. As the oldest surviving London plaque dedicated to a woman, this commemorative sign dates to 1885 and is made of crimson terracotta. If you can’t see it, cross to the opposite side of the road as it sits on the first floor. 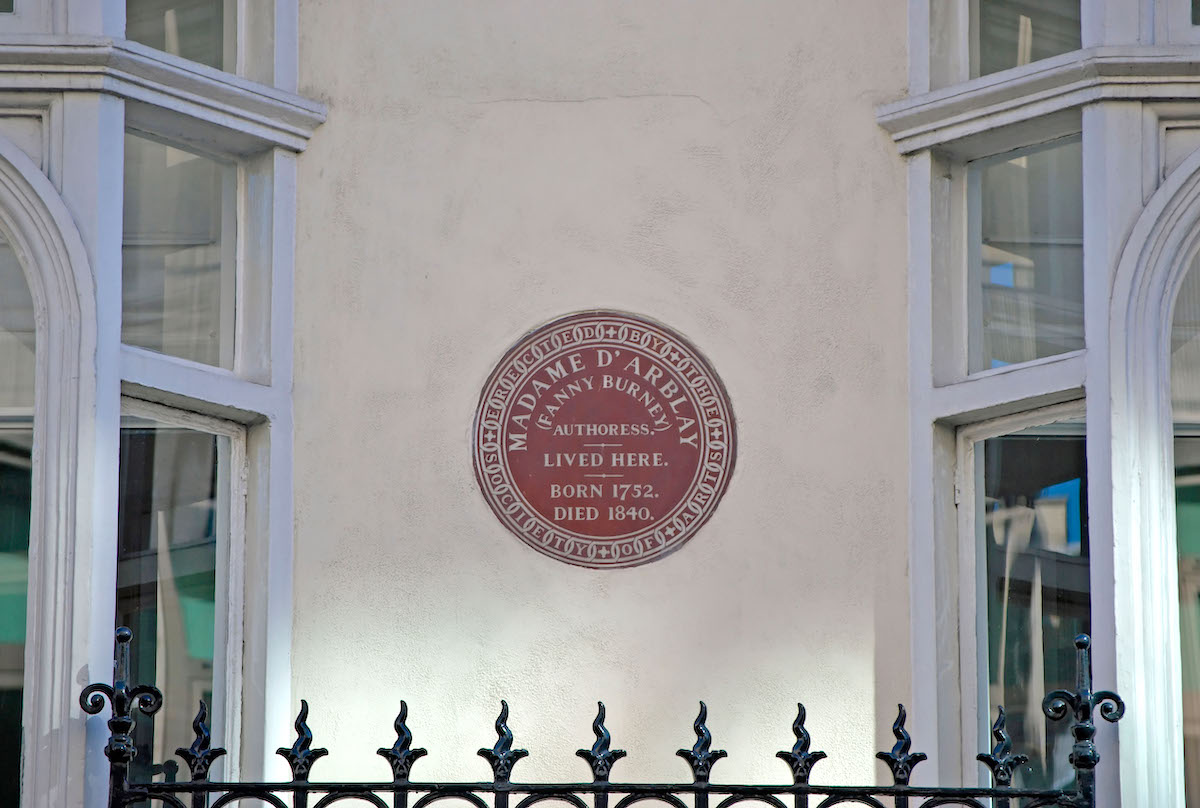 Follow Bolton Street to Curzon Street, and head in the direction of Hyde Park. Take South Audley Street to South Street. After passing the Egyptian Embassy on your left, keep your eyes peeled for the plaque dedicated to Florence Nightingale, which you’ll find just after number 14.

‘The Lady with the Lamp’ is a woman who needs no introduction: Nightingale is renowned as a national hero in Britain due to her contributions to nursing during the Crimean War. 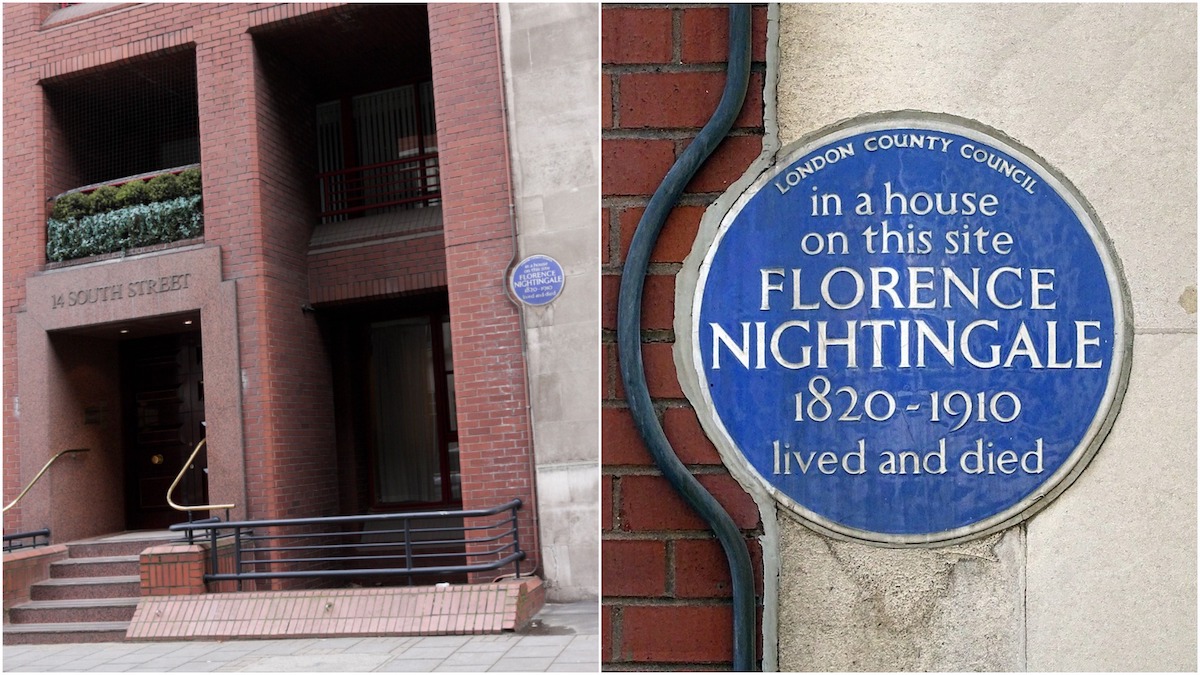 It’s a bit of a walk from Nightingale’s plaque to the next stop on our tour. Follow the edge of Hyde Park heading south then cross Knightsbridge past Hyde Park Corner. Off to your left, you’ll see the Wellington Arch as you follow Grosvenor Place to Grosvenor Crescent. Do a lap of the remarkably well-kempt Belgrave Square, then take Belgrave Place down to Eaton Square Gardens. 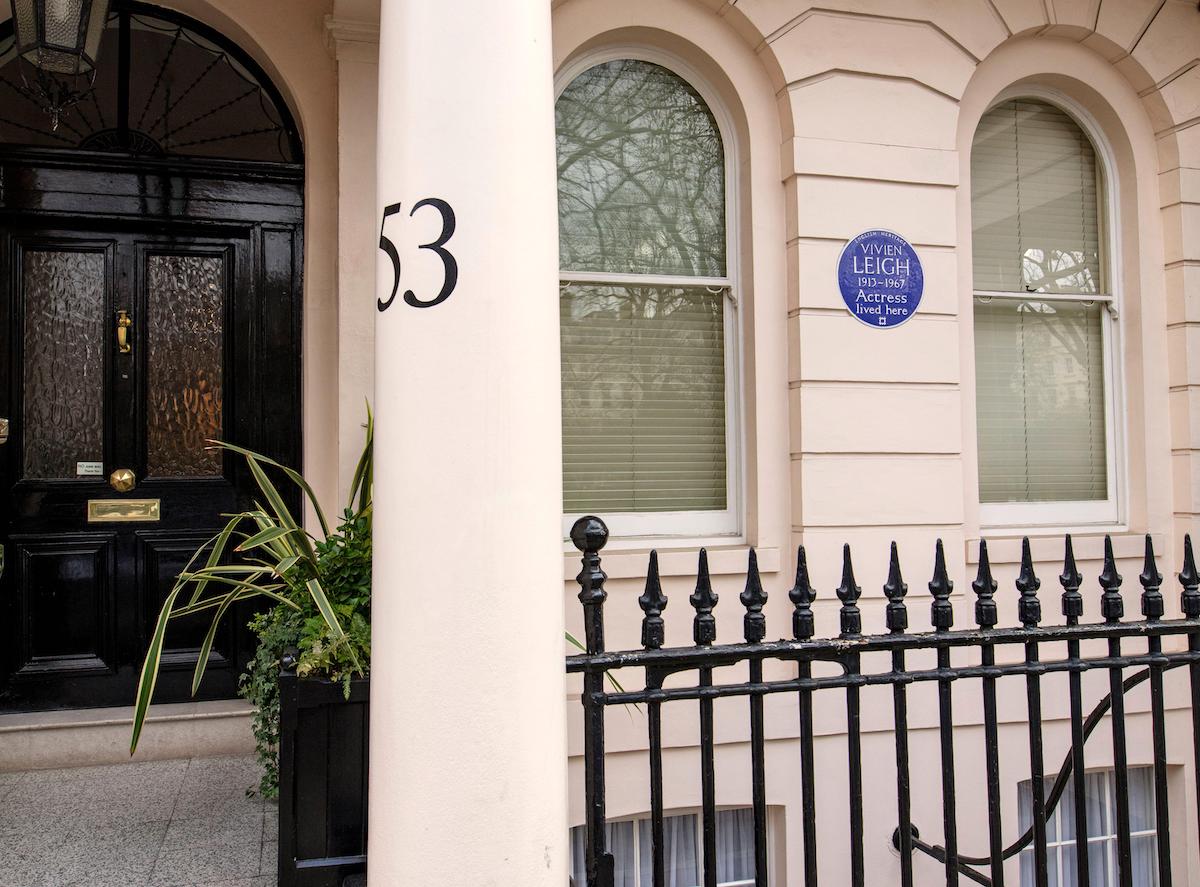 Head west along the A3217, passing Sloane Square station and joining King’s Road. Look out for Markham Square on your right. Just a few houses up, at number 47, you’ll find Dame Maud McCarthy’s plaque. Another cherished nurse, McCarthy earned acclaim for her heroic efforts in the Boer War and World War One.

Continue along King’s Road, and a few minutes later you should see another plaque off to your right. Rather unceremoniously pinned to the facade of a Pizza Express, Princess Seraphine Astafieva’s plaque was erected in 1968 to commemorate the dancer having lived and taught there from the late 1910s to early 1930s. 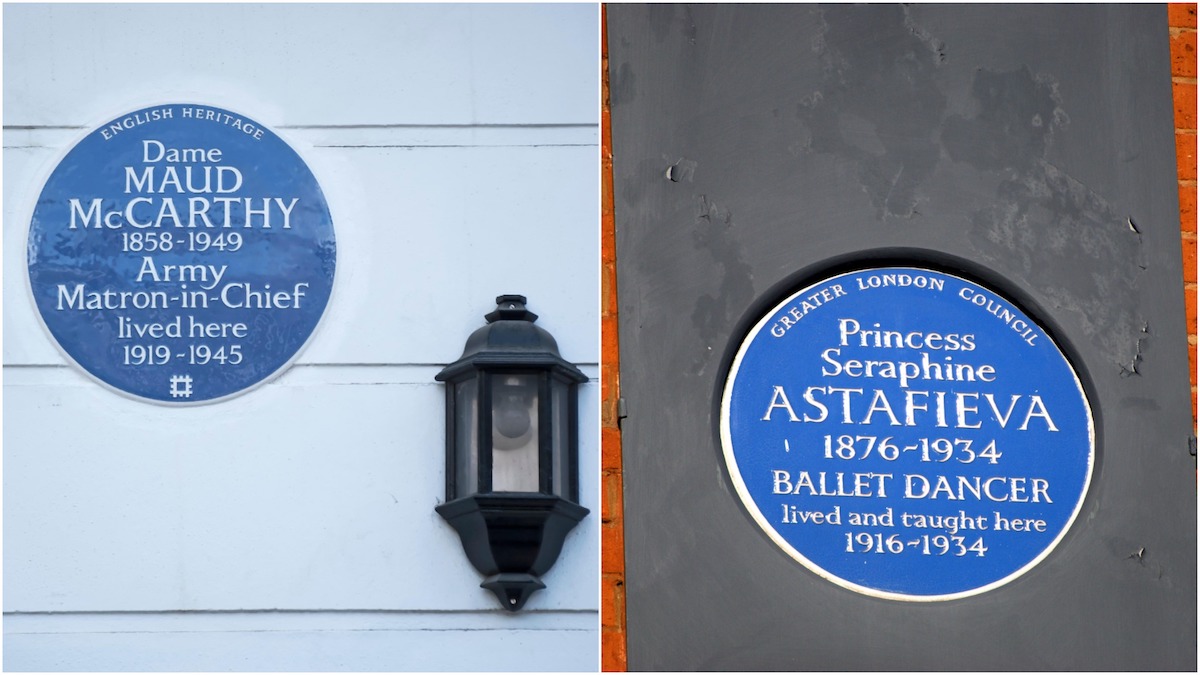 Continue on your way down King’s Road until you reach Carlyle Square. At number 6 sits English Heritage’s ode to Dame Sybil Thorndike, the celebrated theatre and film actress who made her fame starring in Shakespearian and Greek tragedies. 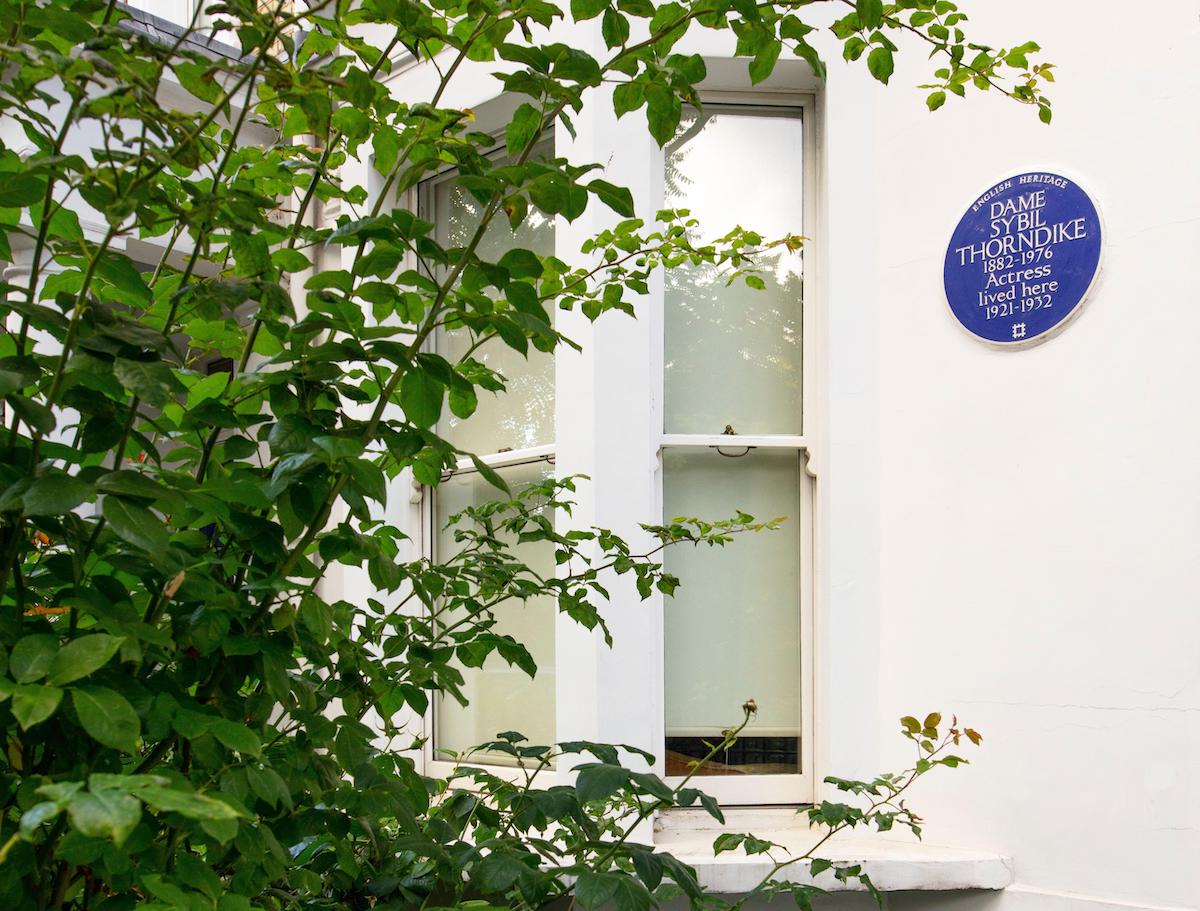 Back on King’s Road, you’ll pass the historic private members club Raffles, which opened in 1967 to cater to London’s elite, from movie stars to international spies. When you reach the four-way junction, take a brief detour up Beaufort Street to Drayton Gardens.

At 107, installed proudly on the stone facade of Drayton Court, is the plaque dedicated to Rosalind Franklin. A pioneering chemist, Franklin is today hailed for her invaluable insights in the study of DNA. During her lifetime, however, Franklin’s contributions were widely overlooked. 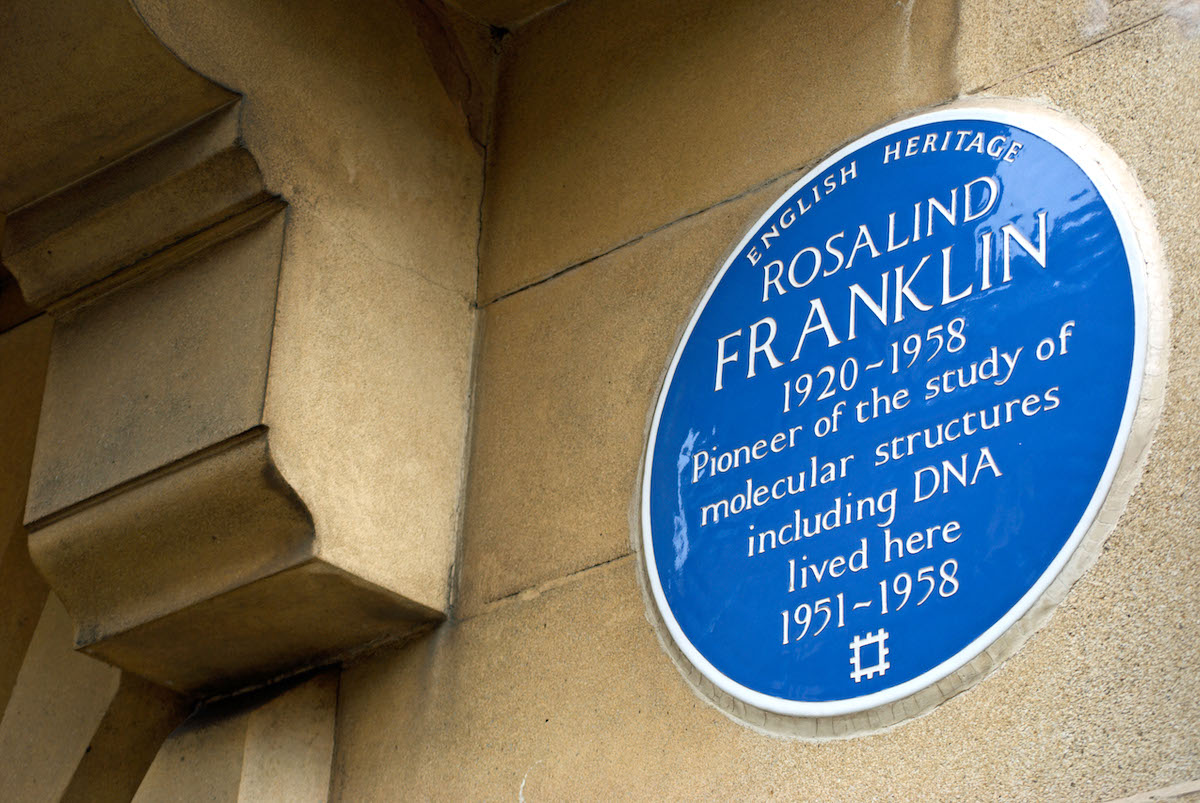 Make your way back down Beaufort Street, and keep going until you hit the Thames. Take Cheyne Walk heading west. Beady-eyed walkers might be able to spot several bonus plaques along this stretch of the walk: one to artist James Whistler (this one’s grey and set back from the street), two side-by-side, for artist Walter Greaves and poet Hilaire Belloc, a double feature for father and son engineers Marc and Isambard Brunel, and lastly another to painter Philip Wilson Steer.

At 120 Cheyne Walk, we reach the final stop on our tour. Sat above the entrance to this grand Chelsea townhouse is the plaque erected in memory of Sylvia Pankhurst. A suffragette, Pankhurst is remembered for her unflinching commitment to the cause of securing women’s right to vote, for which she campaigned tirelessly throughout her life. Pankhurst lived at this residence between 1906-1909. 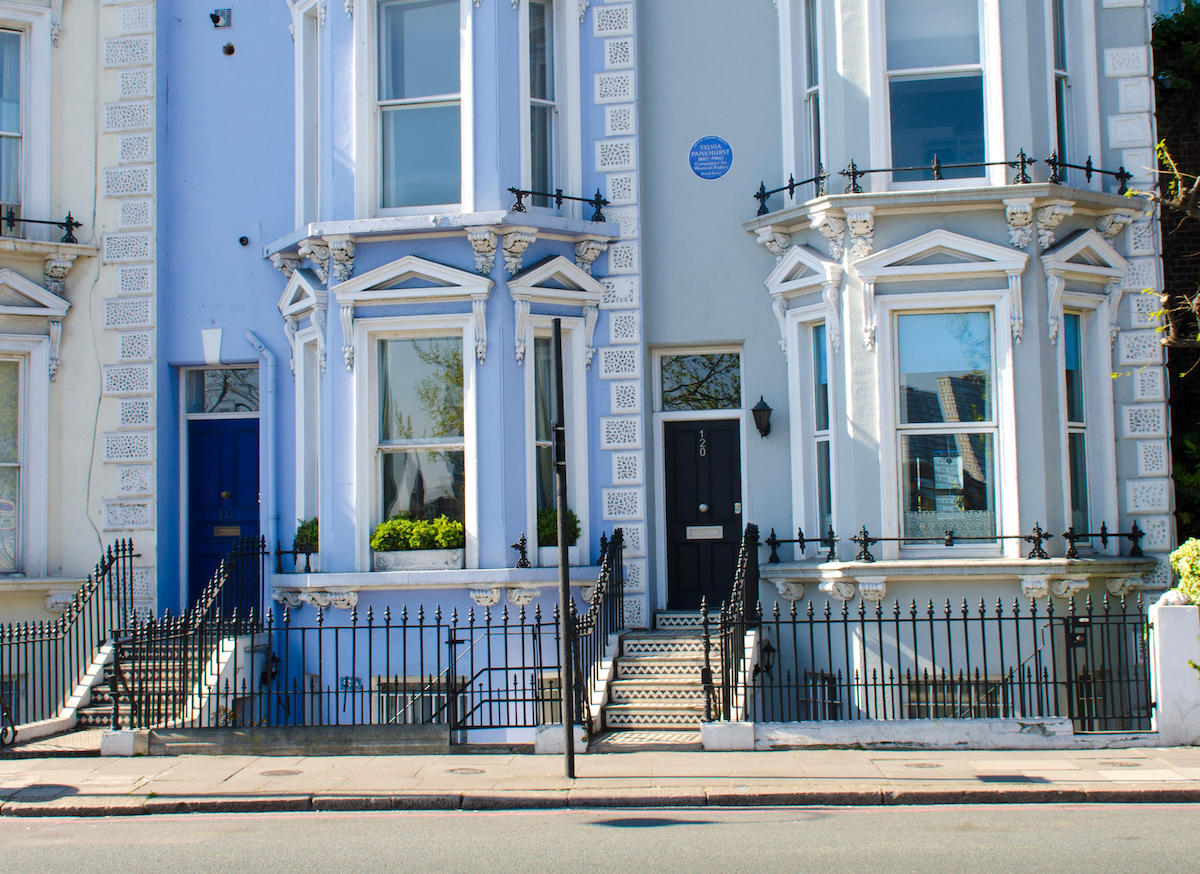