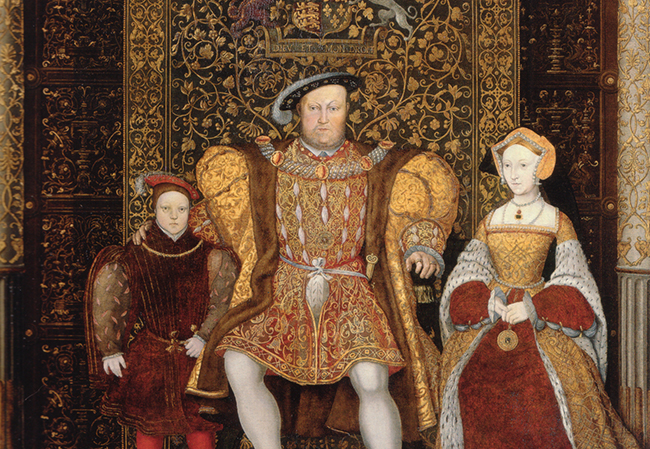 Henry VIII was one of England’s most extraordinary monarchs.

During his 37 year reign Henry married six wives, executed thousands for treason and radically overhauled English religion, parliamentary powers and the Royal Navy. He even transformed the postal service.

Here are the key changes which took place under Henry VIII:

In 1527 Henry sought to annul his marriage to Catherine of Aragon in order to marry Anne Boleyn. Catherine had borne him a daughter but, importantly for Henry, had not produced a son and heir. When the Pope refused to grant him an annulment Henry announced England’s separation from the Roman Catholic Church.

Henry thus began the religious and political upheaval of the English Reformation. The Pope held power over all Roman Catholic states and their inhabitants, but England was now independent of his authority. The Pope responded to Henry’s radical actions by excommunicating him.

Henry’s reasons for separating the English Church from the influence of the Pope were complex. In addition to the annulment, Henry knew that removing the Pope’s influence would extend his own political power and grant him access to additional income.

Initially England’s new religious doctrines did not greatly differ from Catholicism, but cutting off relations with the Pope began England’s steady conversion to Protestantism.

The statutes which changed England forever

Between 1532 and 1537 Henry introduced a number of statutes which ended the relationship between the Pope and England. They made supporting the Pope an act of treason, punishable by death.

The statutes also legalised the King’s leadership over the English Church, as opposed to the Pope’s. In 1534 the Act of Supremacy stated that the king would be ‘accepted and reputed the only supreme head in earth of the Church of England.’

After the Treasons Act, all adults in England could be made to swear an oath acknowledging the king’s supremacy in religious matters.

Henry did not make these decisions alone. His advisers, such as Thomas Wolsey, Thomas More and Thomas Cromwell helped him enact new reforms and break off from the Catholic Church. Together, they established the Church of England, the realm’s new religious body.

The Church of England and the Dissolution of the Monasteries

The Church of England was a bold new idea for how religion might operate in England. The King was its head, rather than the Pope, and Henry thus wielded unrivalled religious authority in the land.

Henry provided the Church of England’s parishes with some of the first bibles translated into English. This was a radical change; previously, almost all bibles had been written in Latin so were unreadable for ordinary people.

Thomas Cromwell was in charge of preparing this religious text, known as the Great Bible. He instructed the clergy to place one in every church so ‘your parishioners may most commodiously resort to the same and read it’. More than 9,000 copies of the Great Bible were distributed across England, and its popularity helped to standardise the English language.

The formation of the Church of England also meant that taxes which had been payable to the Pope were transferred to the Crown. Henry was a prodigious spender, so welcomed the financial benefits of the English Reformation.

The establishment of the Church of England also enabled Henry to abolish England’s Roman Catholic monasteries and convents. 800 religious institutions were suppressed and their vast wealth transferred to the Crown during the Dissolution of the Monasteries. Their land was used to reward Henry’s loyal servants, and their ancient institutions fell into disrepair.

Many welcomed the new system, but others resisted the Church of England and Henry’s reforms. In 1536 Robert Aske led 40,000 English Catholics in the Pilgrimage of Grace. The Pilgrimage was a popular revolt against Henry’s reforms, which was only crushed after Aske and other leaders were executed.

In order to achieve his extensive religious reforms Henry allowed Parliament to pass statutes which give it unprecedented power. The Reformation Parliament could now write laws which dictated religious practice and doctrine. But its authority didn’t stop there: all aspects of the realm’s governance and national life now fell within its remit.

Henry and parliament’s relationship was vital to how he wielded power. He famously acknowledged he was at his strongest when his will was expressed through parliamentary statute, saying

“We be informed by our judges that we at no time stand so highly in our estate royal as in the time of parliament.”

Henry and Parliament didn’t just use their powers against the Catholic Church. The Laws in Wales Acts resulted in the legal union of England and Wales. The Crown of Ireland Act also made Henry the first English monarch to be King of Ireland. Previously, Ireland had technically been a papal possession.

Henry could not have achieved his ambitions without the changes he made to the powers of Parliament. He transformed the role they played in governing England, and laid the foundation for the clash between Parliament and the Crown in the English Civil War.

Henry is sometimes known as the ‘Father of the Royal Navy’. He inherited only 15 vessels from Henry VII, but by 1540 the Royal Navy had tripled in size, boasting 45 warships. He also built the first naval dock at Portsmouth and established the Navy Board to run the service.

Many of Henry’s vessels, like his flagship the Mary Rose, were fitted with modern artillery. The navy moved away from boarding tactics and began to employ gunnery.

In 1545 the Mary Rose sank while leading an attack against a French invasion fleet. These invasion fleets frequently threatened England after Henry’s excommunication. To combat the danger of attacks from Europe, Henry built coastal defence along the south coast.

Among Henry’s less publicised achievements include the establishment of England’s first national postal system. ‘The King’s Post’ ensured all towns had a fresh horse available for anyone carrying mail from Henry’s court. It was headed by a new and important figure, the ‘Master of Posts’.

This national system laid the foundation for the Royal Mail. The system would be opened to the public over a century later by Charles I.