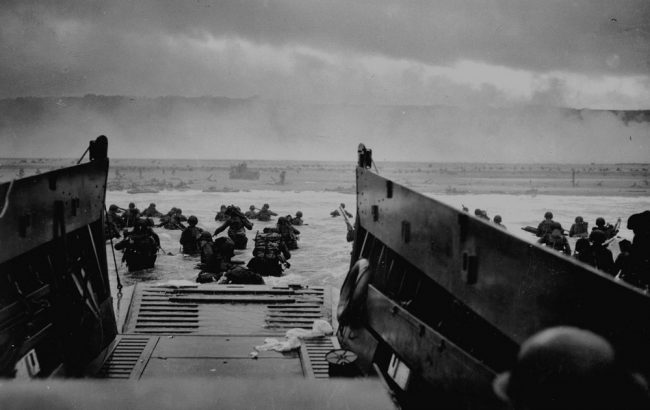 The statistics for the invasion force are staggering: 50,000 men for the initial assault; over two million men to be shipped to France in all, comprising a total of 39 divisions; 139 major warships used in the assault, with a further 221 smaller combat vessels; over 1000 minesweepers and auxiliary vessels; 4000 landing craft; 805 merchant ships;59 blockships; 300 miscellaneous small craft; and 11,000 aircraft, including fighters, bombers, transports, and gliders. In addition, the invasion force has the support of over 100,000 members of the French resistance.

Operation Overlord begins with an airborne assault by US and British airborne divisions.

Seaborne forces land on five beaches: Utah and Omaha, the American beaches; Gold, the British beach; Juno, the Canadian beach; and Sword, to be taken by British and Canadian forces.

By the end of the day, at a cost of 2500 dead, the Allies have a toe-hold in German-occupied France

The airborne assault meets with mixed results. The objectives of these paratroops, parachuting behind enemy lines, include blowing up bridges and attacking German gun positions.

However, in some cases, it takes several hours for the paratroops to work out where exactly they are, and to find one another. Many objectives are not secured in time.

The seaborne landings also bring mixed fortunes. On Utah, Gold, Juno and Sword beaches, soldiers are able to come ashore against manageable resistance. However the landings on Omaha beach result in slaughter.

Nevertheless, by the end of the day, at a cost of 2500 dead, the Allies have a toe-hold in German-occupied France.