Situated in the centre of Scotland, the city of Stirling has played a central part in many of Scotland’s most pivotal historical events. Nicknamed ‘the Gateway to the Highlands’ because of its strategic importance, it has long been a significant settlement, owing both to it being the lowest crossing place over the River Forth and because it features a rocky outcrop, meaning it was quickly recognised as a natural place to build a fortification.

Indeed, by the 11th century, the famous Stirling Castle had been built upon an ancient volcano, and housed generations of royals and was the crowning place of monarchs such as Mary, Queen of Scots. Nearby sites such as Stirling Old Bridge are situated close to the original site of the Battle of Stirling Bridge during the Scottish Wars of Independence some 700 years ago.

Dotted amongst the beautiful countryside are other historic sites such as the ferocious Doune Castle of Monty Python fame, and the tranquil ruins of Inchmahome Priory on an island in the middle of the Lake of Menteith.

Here’s our pick of 10 of Stirlingshire’s fantastic historic sites which you shouldn’t miss. 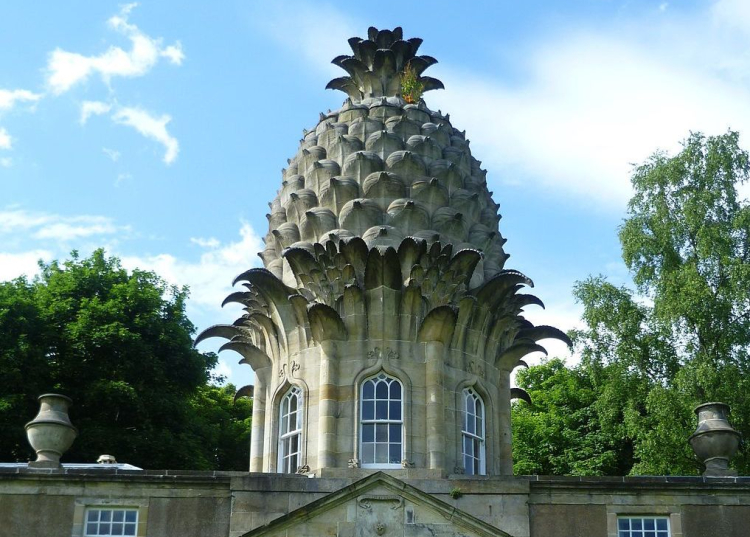 After Christopher Columbus discovered pineapples in Guadeloupe in 1493, they became a delicacy associated with power and wealth. They became a popular motif, adorning gateposts, railings, fabrics and furniture. The Earl of Dunmore was no exception to this craze and grew pineapples in his hothouse in Stirlingshire. After returning from work as the last Colonial Governor or Virginia he completed this pineapple folly, which surmounted two bothies used as accommodation for his estate staff.

After remaining in the family for centuries, the Dunmore Estate was broken up in 1970 and sold in lots. One lot, named the ‘Pineapple Lot’, included the folly and large walled garden. It was purchased by the Countess of Perth, and in 1974 was given to the National Trust for Scotland for better preservation, then leased to the Landmark Trust who restored the building and used it to provide holiday accommodation, which is still available today. 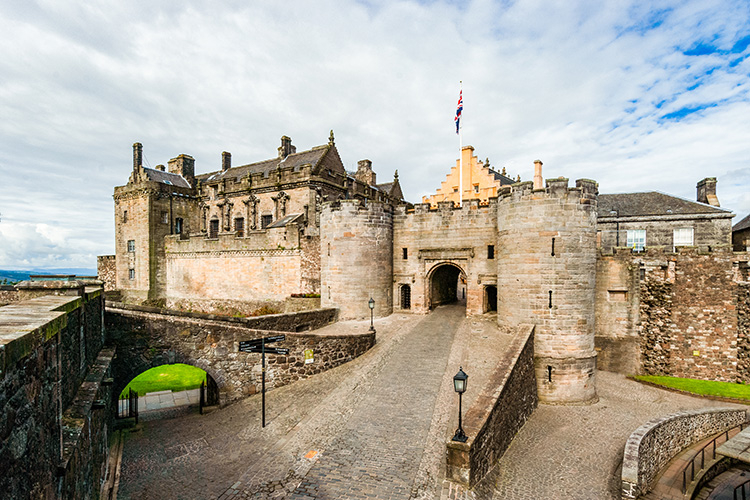 Stirling Castle is an iconic royal palace and stronghold, seen to represent Scottish independence and a focal point for many of the most important events in Scotland’s history. At least part of the reason for the prominence of Stirling Castle over the centuries must be attributed to its location. Situated atop the flat top of an ancient volcano, it forms an imposing sight and a formidable stronghold. The first mention of Stirling Castle dates to 1110, when Alexander I endowed a chapel there, but many believe the site has been fortified since prehistoric times (although this is disputed).

The current grand incarnation of Stirling Castle mostly dates from the 15th and 16th centuries onwards, though a few structures remain from the 14th century, while the outer defences fronting the town date from the early 18th century. Stirling Castle is a Scheduled Ancient Monument, and is now a tourist attraction managed by Historic Environment Scotland. Tours around the castle’s buildings and grounds are available – visitors can tour with an audio guide or with a tour guide and there are a range of exhibitions to see. 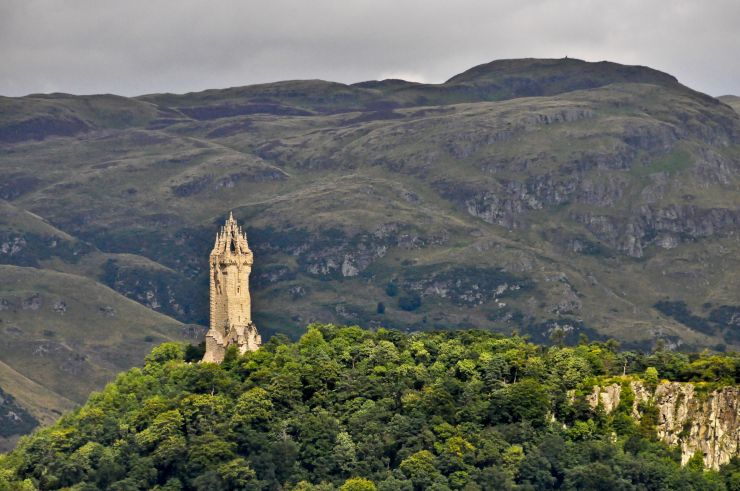 Situated proudly on Abbey Craig, a hilltop overlooking Stirling, the Wallace Monument is a 67-metre-high tower that commemorates William Wallace, the 13th and 14th century Scottish hero. A campaign to build a tower there was started in 1851 following a resurgence in Scottish national identity at the time. In addition to public subscription, it was partially funded by foreign donors who included Italian national leader Garibaldi. The foundation stone was laid in 1861, and it was completed to the designs of architect John Thomas Rochhead in 1869.

Built in the Victorian Gothic style, its location is said to have been where William Wallace watched the gathering of the army of King Edward I of England right before the Battle of Stirling Bridge in 1297. Today, it is a popular attraction, with panoramic views of the nearby countryside and a number of display rooms featuring, among other information and objects, a sword that is reported to have belonged to Wallace. 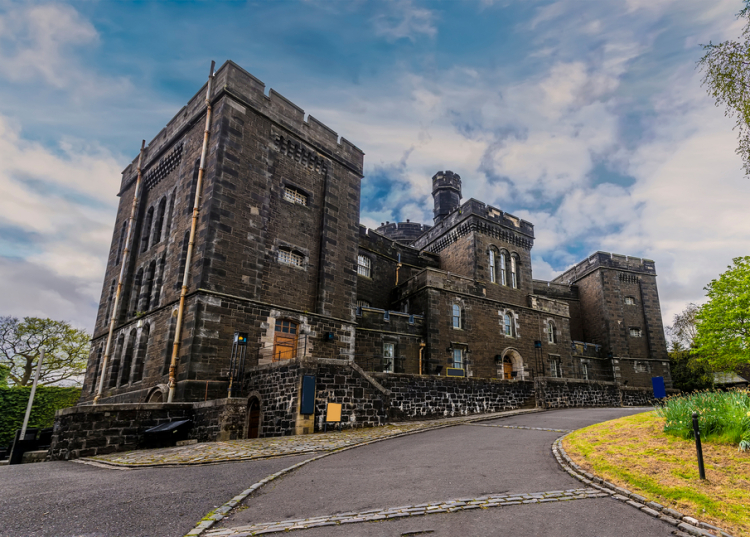 By 1847, Stirling’s old Tolbooth Jail – condemned as the ‘worst jail in Britain’ – was recognised as being inhumanely vile, overcrowded and unfit for purpose. As a result, Stirling Old Town Jail was built (then known as the New County Jail), and, though the conditions were markedly better, featured a strict regime of solitude, labour and unpalatable food. The building was still in use as a military prison until 1935.

The Old Town Jail was refurbished in the 1990s, and today is open to the public. Costumed actors guide visitors around the jail and explain what life would have been like for inmates and guards alike. Other exhibitions explore the conditions today in Scotland’s modern jails. A particular highlight is the rooftop observation area, that offers panoramic views over Stirling town. 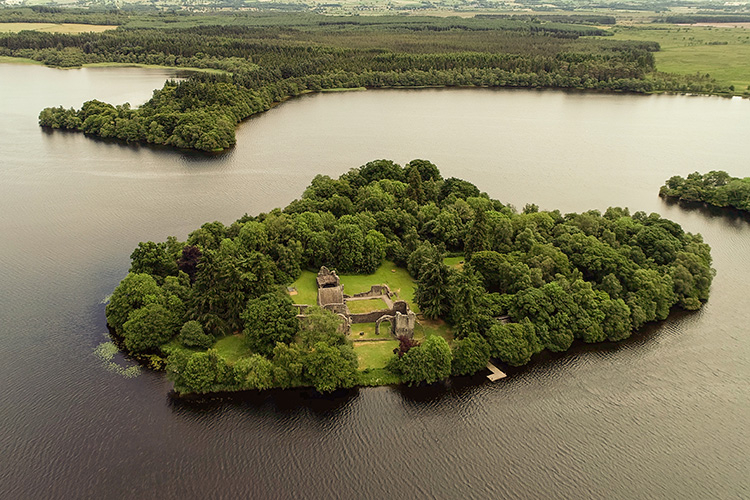 Around 1238, a small community of Augustinian canons founded a priory on the largest of 3 islands in the Lake of Menteith in Scotland. Inchmahome Priory’s secluded island location offered the monks isolation from the world to worship God in peace, while also providing a sanctuary for royal visitors. In September 1547, English forces defeated the vast Scottish army at the Battle of Pinkie while trying to enforce Mary Queen of Scots’ marriage to Edward VI of England. Mary and her mother, Mary of Guise, were brought to Inchmahome for safety.

Monastic life at Inchmahome ended shortly after the 1560 Scottish Reformation. Stone was taken from the buildings to build on Inch Talla, and the chapter house became a family mausoleum for the Menteiths. From the 1800s, Inchmahome became a tourist attraction thanks to Sit Walter Scott’s writing and the railway nearby – the Loch of Inchmahome became the Lake of Menteith.Today, much of the cloister buildings at Inchmahome Priory are ruined although the chapter house, converted to a mausoleum in the 17th century, has survived. Visitors can admire the large collection of beautiful carved stones, including an effigy of Walter Stewart and Countess Mary in a loving embrace. 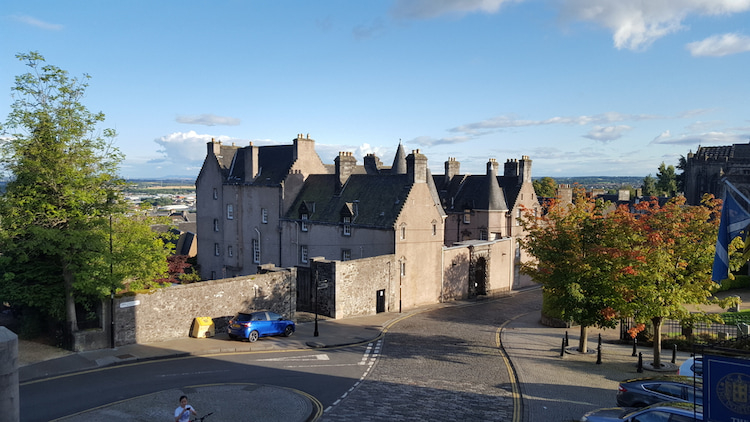 Built in 1630 for the 1st Earl of Stirling and later extended by the 9th Earl of Argyll in the 1670s, Argyll’s Lodging is the most complete and significant example of a 17th century townhouse in Scotland. Situated on Castle Wynd on the approach to Stirling Castle, it demonstrates significant French influence, with the turrets showing classic French provincial townhouse features. The interior is similarly resplendent, featuring parts of original wall decorations. From the early 1800s onwards, the house had many uses, such as a British-Army-run military hospital for over a century, and then and youth hostel in 1964.

Three decades later, the National Trust of Scotland turned Argyll’s Lodging into a museum. The principal rooms have been restored to replicate their 1680 state, with particular highlights including the High Dining Room’s impressive painted decorations and the Drawing Room’s grand fireplace and recreated tapestries. 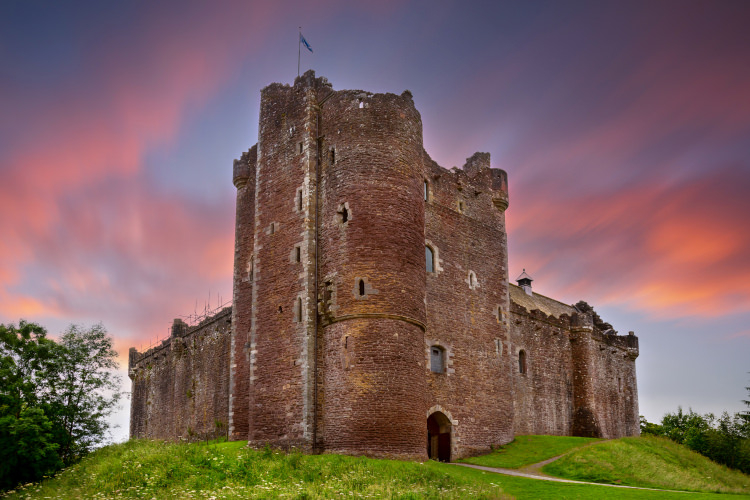 Originally built in the 13th century, Doune Castle was most likely damaged during the Scottish Wars of Independence and rebuilt in its present form in the late 14th century. The man who rebuilt it was Robert Stewart, 1st Duke of Albany and grandson of Robert the Bruce. Albany has often been considered the ‘uncrowned king of Scotland’, and was the country’s effective ruler from 1388 to his death in 1420, due to his elder brother Robert III’s political weakness and the capture of the future James I by the English in 1406. For many years Doune Castle acted as royal residence, hunting lodge, and dower house (traditionally used by the widow of an estate owner) until 1603, when James VI left Scotland to take the English throne as James I.

Ruined by 1800, restoration works were then undertaken in the late 19th century, and the castle was passed into state care a century later. Since then the castle has been used as a prominent filming location, and has appeared in Monty Python and the Holy Grail as well as in Game of Thrones as Winterfell. Today, visitors to Doune Castle can re-tread the footsteps of kings, real and fictional, while listening to the audio tour narrated by Monty Python member Terry Jones. 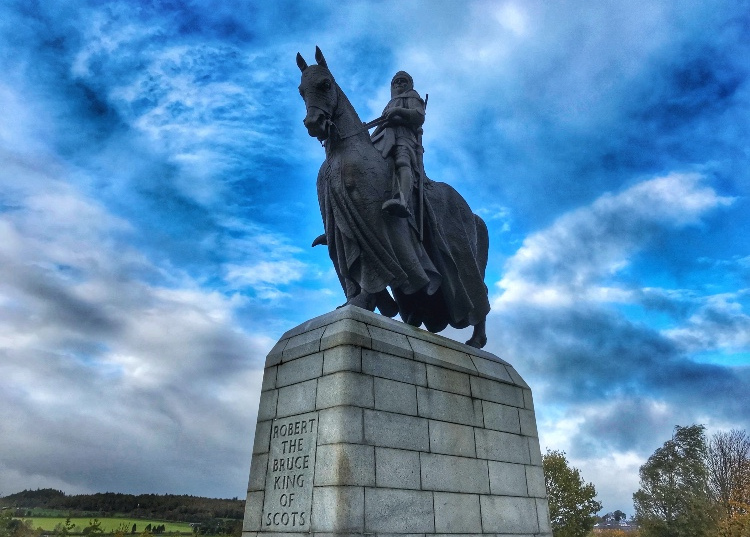 Bannockburn Battlefield was the site of the English defeat by Scottish leader Robert the Bruce, repelling their attempts to control Scotland and once again affirming its sovereignty. It was a key clash in the Wars of Scottish Independence, and despite having a much smaller army – roughly 5,000 Scots to 18,000 English – Robert the Bruce managed to repel the English by the next day. King Edward fled, whilst many of the English soldiers were killed or taken prisoner. Stirling Castle was surrendered to the Scots, and Robert the Bruce’s wife, sisters, and daughter were released from their 8-year imprisonment in England. In 1328, the Treaty of Edinburgh-Northampton was signed, in which England acknowledged Scotland’s sovereignty, with Robert the Bruce as its rightful leader.

Today, Bannockburn Battlefield is managed by the Scottish National Trust and provides guests with the opportunity to explore the site’s important place in history. The heritage centre gives information on the battle and its consequences, with the Battle of Bannockburn experience allowing guests to witness a digitally-recreated version, complete with 3D warfare! 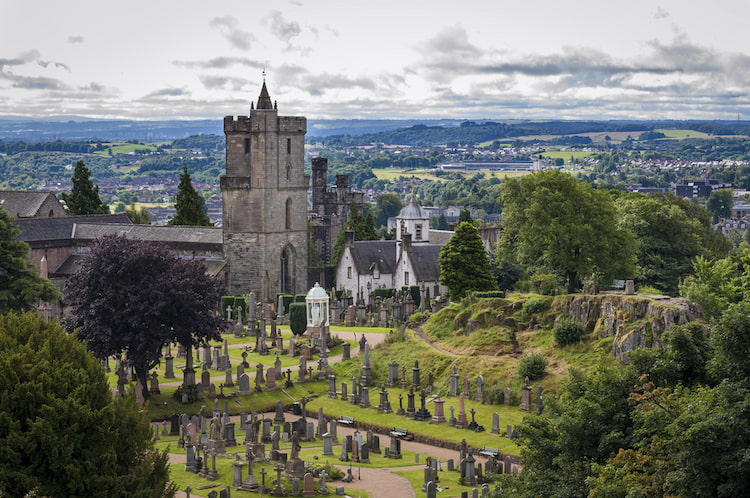 9. Church of the Holy Rude

The second oldest building in Stirling after Stirling Castle, the Church of the Holy Rude was founded in 1129 during the reign of David I. However, the earliest part of the church dates from the 15th century, because the original structure was destroyed by fire. It is named after the Holy Rood, a relic of the True Cross on which Jesus is said to have been crucified. The chancel and tower of the church were added in the 16th century.

The Church of the Holy Rude has been traditionally associated with the monarchy, being located adjacent to Stirling Castle. It became a favourite of Scottish monarchs, particularly the Stewarts when they developed Stirling Castle into a Renaissance palace. It hosted royal baptisms and coronations, and today is one of only three churches still in use in Britain that have been the site of coronations. 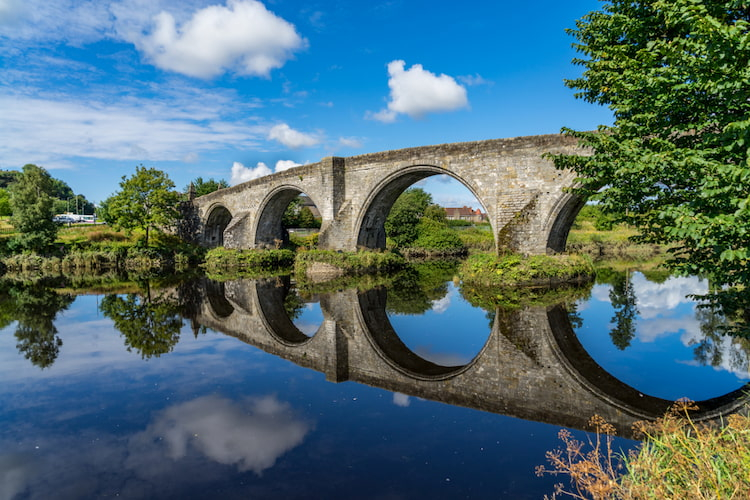 The present Stirling Old Bridge was constructed in the 1400s or 1500s, replacing a long succession of timber bridges. The most well-known of these is undoubtedly one which stood close by which, in the 1290s, was the site of William Wallace and Andrew Moray’s defeat of Edward I’s forces at the Battle of Stirling Bridge in 1297. The eponymous bridge was small – it only allowed two men to cross at a time. Waiting until the English had begun the slow process of bringing their troops across, the Scottish attacked at a particularly vulnerable moment. They gained the east side of the bridge, cutting off potential reinforcements and slaughtering those who were on the east side.

Stirling Old Bridge was also associated with the Jacobite Rising of 1745, when an arch was removed to halt Bonnie Prince Charlie’s forces as they marched south. Today, the bridge is a popular attraction and remains one of the best medieval masonry arch bridges in Scotland. 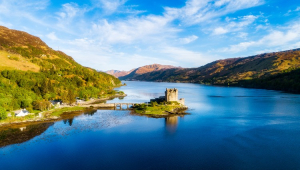 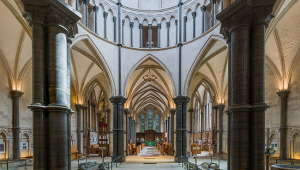 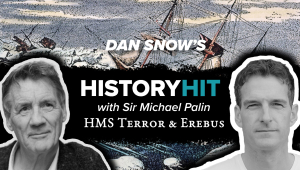 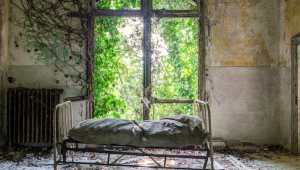 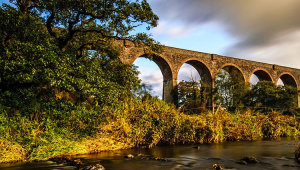 4 of the Best Historic Sites in County Armagh 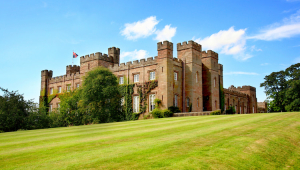 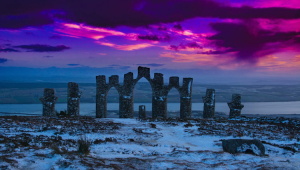 8 of the Best Historic Sites in Ross & Cromarty 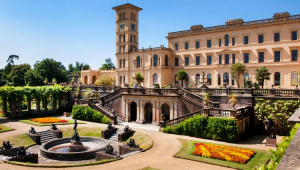