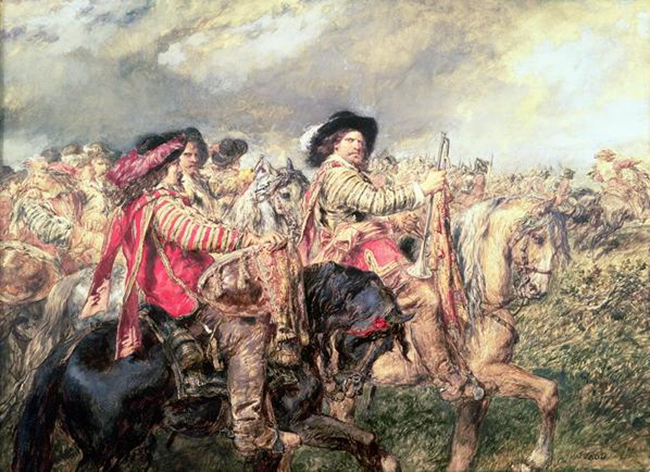 The English Civil War was an intermittent nine-year confrontation between King and Parliament, but how was it won and how was it lost? Here are four of the key battles that shaped the destiny of a nation.

This was the first battle of the Civil War and if the royalists had been a little more disciplined it could have been the last. After Charles fled London he made his way north to raise an army. The country quickly began to divide between the conservative north which largely proclaimed for the King and the south which veered towards Parliament.

The two sides met at Edgehill, not far from London. The Parliamentarians were commanded by the Earl of Essex who had been ordered to halt Charles’ march on London. The Royalists on the other hand, were led by Prince Rupert, nephew to the King and veteran of the 30 Years War.

An initial charge by Rupert and his cavalry seemed to turn the battle decisively in Charles’ favour. Much of the Parliamentarian cavalry fled, but instead of returning to the battlefield and securing the victory, Rupert and his horsemen went off in search of the baggage train and plunder.

In their absence the remaining Parliamentarian cavalry regiments attacked the Royalists. The two sides fought one another to a standstill and eventually agreed to call it a draw. Charles retreated to Oxford which he set up as a winter base.

After Edgehill the Royalists began asserting their control, taking much of Yorkshire and winning a string of victories in the West. By now the Earl of Essex was leading the only Parliamentarian army in the field, but he was in trouble.

After marching to relieve a siege at Gloucester he found it difficult to maintain his supply lines. He began making preparations for a retreat back to London. Charles moved to stop him and blocked his path at Newbury.

The first day saw heavy fighting between the two sides with no clear winner. That night, as both sides rested, Charles made the decision to withdraw against the advice of his commanders.

The next morning Essex, to his surprise and relief, discovered that the Royalists had left the field and his route to London was clear. He arrived back to jubilant crowds. Charles had missed his chance to destroy the Parliamentarians and from then on his cause began to suffer.

Marston Moor was the largest battle of the Civil War and marked a major turning point. In 1644 York was being besieged by parliamentarian and Scottish troops. Charles ordered Rupert to relieve the siege and he headed North with the full force of his much feared cavalry.

But there was a new opponent on the scene. Oliver Cromwell, an MP, had risen quickly through the ranks and his Ironside cavalrymen were developing a reputation to rival Rupert’s.

Early on it seemed as if the royalists held the upper hand as Rupert’s cavalry charges inflicted heavy losses. However, Cromwell led his cavalry behind royalist lines and attacked from the rear. Although the Royalists put up a brave fight they were unable to defeat the numerically superior force of Scots and Parliamentarians.

The victory handed York and the north to the Parliamentarians. It popped the myth of Rupert’s invincibility and almost destroyed the Royalist army in the north.

After Marston Moor, Cromwell established the New Model Army – a highly disciplined professional fighting force. Commanded by himself and Thomas Fairfax, it began to turn the tide of the war and would prove crucial in achieving a landmark battle at Naseby.

Again an initial charge from Rupert’s cavalry was successful but once again they headed off in search of the Parliamentarian baggage train rather than finishing off the fight. The Parliamentarians were able to regroup and defeat the Royalist infantry. When Rupert returned to the battlefield his cavalry refused to fight.

The battle was lost and with it the war. This was the beginning of the end for Charles. He had lost his main army and captured correspondences showed he had been seeking Catholic help. Support flooded towards Parliament.

In April 1646 he fled the besieged Oxford and surrendered to the Scots who then handed him over to Parliament. The first Civil War was ended. Charles would later escape and restart the war, but he was swiftly recaptured and royalist rebellions put down.