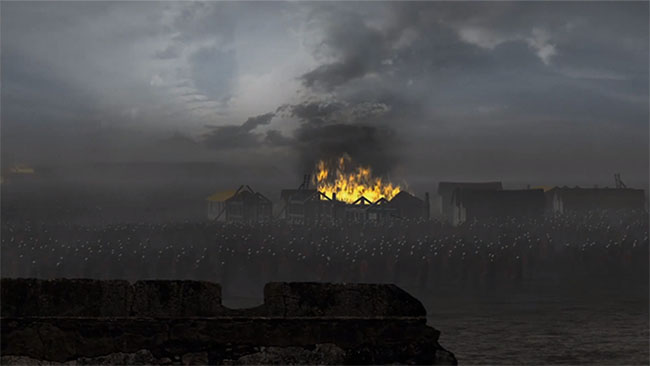 For much of the Anglo-Saxon period, London was not the fortified settlement known as Londinium to the Romans. The Saxons had left that city largely abandoned. Some historians state this is because they were afraid of the old city – believing it was haunted; others say that the Saxons simply could not maintain the complicated Roman infrastructure.

Whatever the reason the people of the time decided to construct their own trading town to the west of the Roman walls, the town of Lundenwic. It was developed to the west of the old city, but still on the banks of the Thames. It stretched from around where Covent Garden lies today down to the waterfront, sprawling over 600,000 square metres.

Where the walled Roman city was deserted and quiet, Lundenwic was a bustling hub of trade – not only for British natives, but also for people who had travelled from overseas. Described as ‘a trading centre for many nations’ by the contemporary scholar, The Venerable Bede, Lundenwic was unique in Britain for the mix of peoples and cultures that visited its ports.

Traders from Britain, Europe and even beyond flocked to Lundenwic for its flourishing trade: goods and slaves predominantly.

London was in a prime location

London was the meeting point of three kingdoms, Wessex, Mercia and East Anglia, and it was also a focal point for various Roman roads. Originally the town lay within the bounds of the Kingdom of East Anglia, but the Anglo-Saxon period saw a constant shift in the borders and rulers of the Kingdoms of England.

It was a town in constant change of ownership; even the Scandinavian invaders laid claim. From 871 to 886 AD the Vikings were in control of the city, but it kept on trading as it always had and even saw an increase in commerce due to the amount of Saxon slaves the Vikings sold for profit.

The Saxons viewed the Thames as a gateway to the World; it was a navigable tributary that gave London direct access to the English Channel. By 886 AD King Alfred the Great had reclaimed Lundenwic and re-established settlement in the old fortified Roman town.

Alfred placed the Ealdorman Aethelred of Mercia in charge of the city and trade continued to prosper alongside the slow gradual unification of all of England under the royalty of Wessex.

By 920 AD the settlement of Lundenwic had become all but abandoned, not to be repopulated until some years later. London became the centre of England’s economy and trade and continued to flourish. By the end of the tenth century the then English king, Aethelred, had established London as his capital – moving from Winchester, the traditional seat of the King of Wessex.

Anglo-Saxon London came to an end in 1066 with the Norman conquest. Although William the Conqueror was foiled in his first attempt to take the city via London Bridge, he then marched his army to the northwest of the city, where he planned a fresh assault. Before it began however, the Saxons surrendered London to William and soon after recognised him as king.