Most people thinking of pyramids jump straight to Ancient Egypt. While that’s not wrong, it’s not necessarily right either. There are ancient pyramids all around the world, from a plethora of different cultures and civilisations and representing many different architectural styles.

From the famous attractions of Egypt to Mesoamerican pyramids, South American adobe structures, Mesopotamian ziggurats, North American mounds and even Roman ceremonial follies, these colossal structures pop up across the globe.

Curiously, pyramidal structures were constructed by cultures and in eras that had no apparent connection to one another.

Here are 15 of the most incredible surviving pyramids of the ancient world. 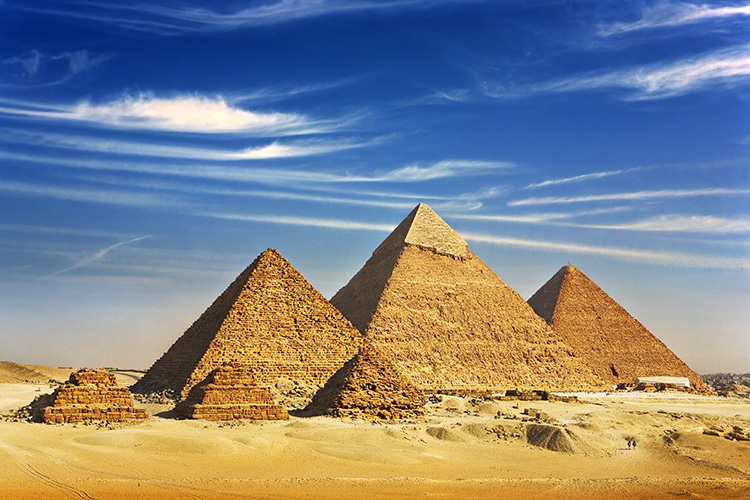 Probably the most famous pyramid site in the world, Giza is home to Ancient Egypt’s Great Pyramid, the famous Sphinx and two other amazing pyramids. The largest pyramid in Giza, and in the world, belongs to the second king of the Fourth Dynasty, Khufu or ‘Cheop’. Khufu’s pyramid is Giza’s oldest and, at its great size of 145 metres, became known as ‘The Great Pyramid’.

A UNESCO World Heritage site, today Giza is one of the best places to explore Ancient Egypt. Visitors can enter each of the pyramids or view them together from the dramatic panorama point, while the the Great Sphinx is also located nearby. Estimated to date back to 2528–2520 BC, some Egyptologists believe that this majestic half man, half lion is modeled on Khafra. 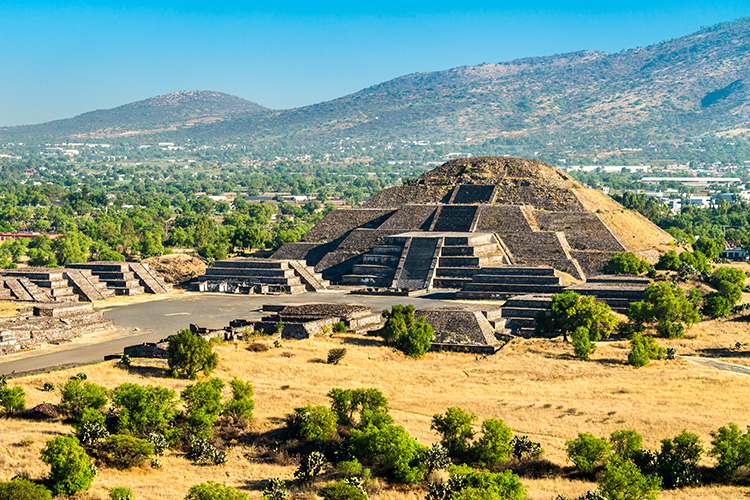 The Pyramid of the Sun at Teotihuacan measures 225m by 222m at its base and 75m high is one of the largest and most impressive pyramids on the planet. Teotihuacan was a holy Mesoamerican city built in around 400 BC in what is now Mexico. Characterised by looming stepped pyramids, Teotihuacan is incredibly well-preserved and is a UNESCO World Heritage Site.

Visitors to Teotihuacan can manoeuvre their way through the city via its original streets, such as Avenue of the Dead, which divided the city into quarters, although take note that the site is absolutely enormous. 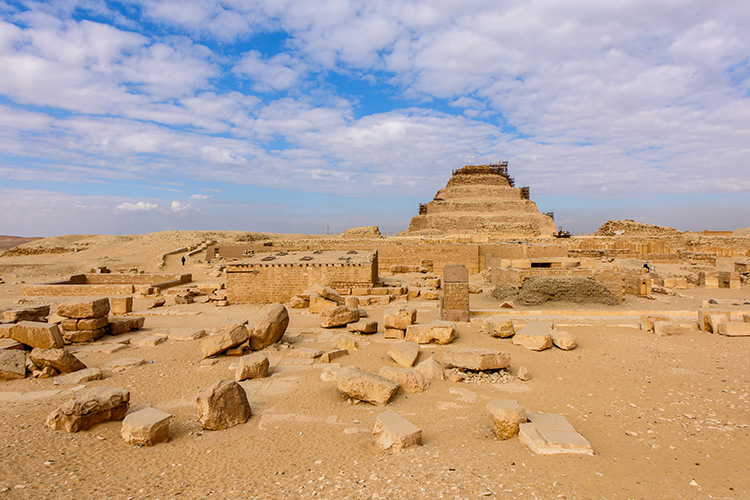 Saqqara was the burial ground of the Egyptian city of Memphis and home to numerous pyramids and tombs. Now a UNESCO World Heritage site, Saqqara contains eleven major pyramids sprawled over six miles, including the first ever pyramid, known as the Step Pyramid and funerary complex of pharaoh Djoser.

Saqqara is massive and, for those short on time the best places to see are in the north, including the Serapeum, Djoser’s funerary complex and, in between these two, the Mastaba of Akhti-Hotep and Ptah-Hotep, the son and grandson of official Ptah-Hotep. 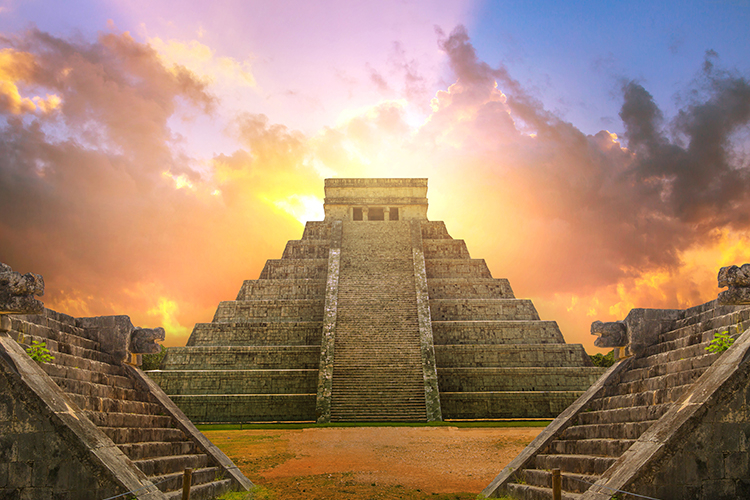 Stunningly well-preserved and imposingly beautiful, Chichen Itza is one of Mexico’s most impressive historical sites and includes the world famous, looming Mesoamerican step-pyramid known as El Castillo. A UNESCO World Heritage site based in the forests of the Yucatan Peninsula, Chichen Itza is actually made up of two cities built by two peoples, the Maya and the Toltecs.

Chichen Itza is one of the most popular tourist attractions in Mexico, so be prepared for crowds. To avoid them, we suggest arriving as close to possible to opening hours – right at the start, or right at the end of the day. It is often hot and sunny and the site offers little shade (or protection, should it rain). 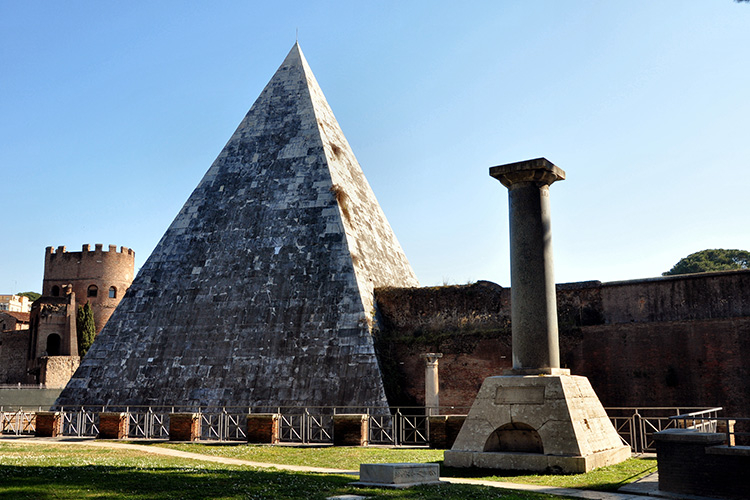 The Pyramid of Cestius is a truly unique Roman pyramid built as a tomb for the affluent magistrate Caius Cestius between 18 and 12 BC. Constructed of white marble and brick, this ostentatious 35-metre high tomb was likely built in this style due to the popularity of all things Egyptian which swept Rome after Egypt was incorporated into the Empire.

Today, the pyramid can only be accessed with special permission due to ongoing conservation works. Yet the pyramid’s exterior can be admired fully from within the Aurelian Walls near the Protestant Cemetery on the northwest side. 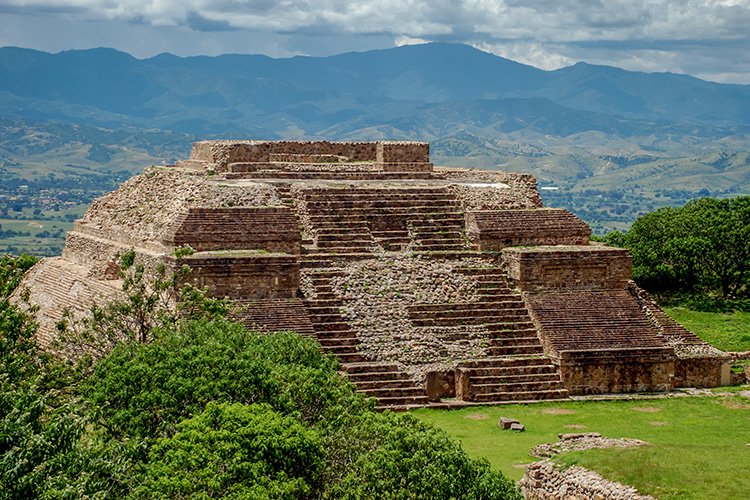 A remarkable UNESCO listed pre-Columbian site in Mexico, Monte Alban contains a number of large and impressive pyramids, probably built by the Zapotecs. Monte Alban was inhabited for approximately 1,500 years by a succession of civilisations, including the Olmecs, Zapotecs and Mixtecs and, at its peak, had a population of around 25,000 people. The site is characterised by over 2,200 terraces as well as numerous pyramid structures.

Today, Monte Alban is a popular tourist destination and a UNESCO World Heritage site. It has a small on-site museum showing some of the finds from the excavations. 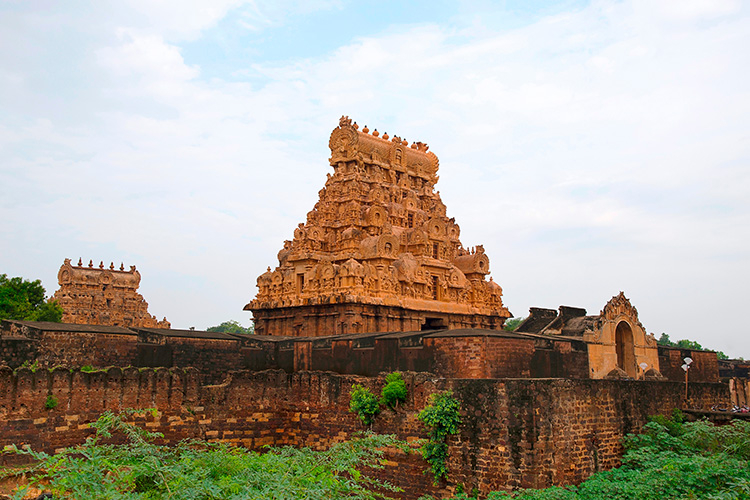 One of several remarkable Hindu temples built by the leaders of the Chola Empire, the Brihadisvara temple has a quite spectacular central pyramid structure. Built from 1003 to 1010 during the reign of Rajaraja I, the temple was constructed in honour of the Hindu deity Shiva.

The temple looks at its most beautiful at sunrise and sunset: the softer light looks fantastic on the honey-coloured granite. The temple itself is part of a group of temples known as the ‘Great Living Chola Temples’ and remains one of the most popular sites in Tamil Nadu. 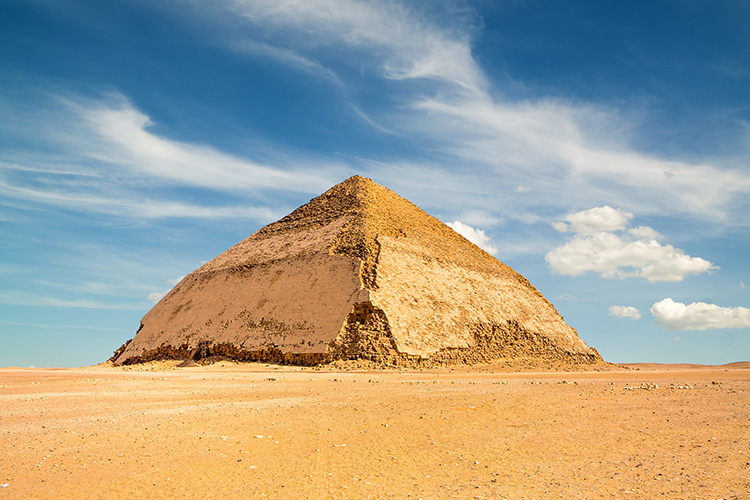 Dahshur was once home to eleven Ancient Egyptian pyramids, of which few have survived. However, for those wishing to view the Egypt’s pyramids in peace and quiet, Dahshur is the place to go. Unlike the more popular Giza and Saqqara, Dahshur has not become a tourist hotspot, despite its ancient attractions, including the Red Pyramid and the Bent Pyramid.

Built by the pharaoh Sneferu, founder of the Fourth Dynasty and father of Khufu, the Red Pyramid is one of Dahshur’s most famous residents and the second oldest pyramid ever built. In fact, it is thought that this was where Sneferu himself was buried.

Tenochtitlan in Mexico was established on an island in Lake Texcoco in 1325 AD as the capital city of the Aztecs and, in its final and most prosperous days, was ruled by Motecuhzoma II, also known as Montezuma. At its peak, Tenochtitlan was a thriving and imposing city with around 200,000 inhabitants. It was characterised by its enormous pyramids and clear street grids, dividing Tenochtitlan into four zones.

Today, remnants of Tenochtitlan are hard to find as they have been consumed by the development of modern Mexico City. Those Tenochtitlan sites which have been excavated, including five temples of which Templo Mayor is one, are protected on UNESCO’s World Heritage list, however there is no single Aztec site to visit. 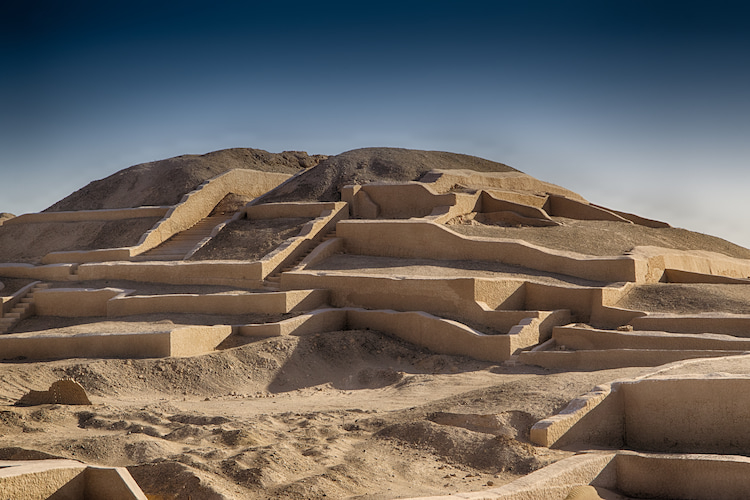 Cahuachi is believed to have been a pilgrimage site of the Nazca people. Still an active archeological site, Cahuachi is dominated by several adobe pyramids made of sand and clay as well as having a graveyard.

Little is known about Cahuachi, but as it overlooked the Nazca Lines, it is thought to have been a ceremonial site. Another site at Cahuachi is known as Estaquería, which archeologists believed was used for mummification purposes. A general Nazca tour which includes Cahuachi and other sites takes approximately 3 hours. 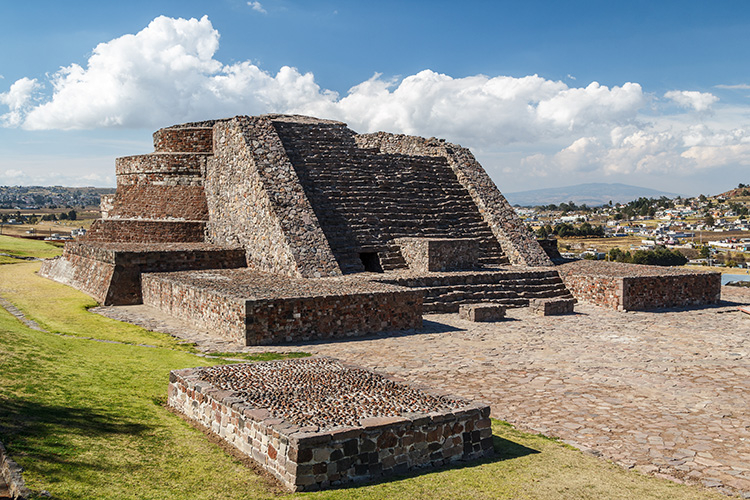 Calixtlahuaca near Toluca in Mexico is a well-preserved Aztec archaeological site which was once a thriving city originally home to the Matlatzinca people – the people of the Toluca Valley. The Calixtlahuaca site has a series of fascinating and impressive structures, not least of which are its vast pyramid-like temples.

The ruins of the city today are not extensive, although they’re still worthwhile. Perhaps because of this they’re not heaving with tourists, and visitors can often enjoy the site in relative tranquillity. 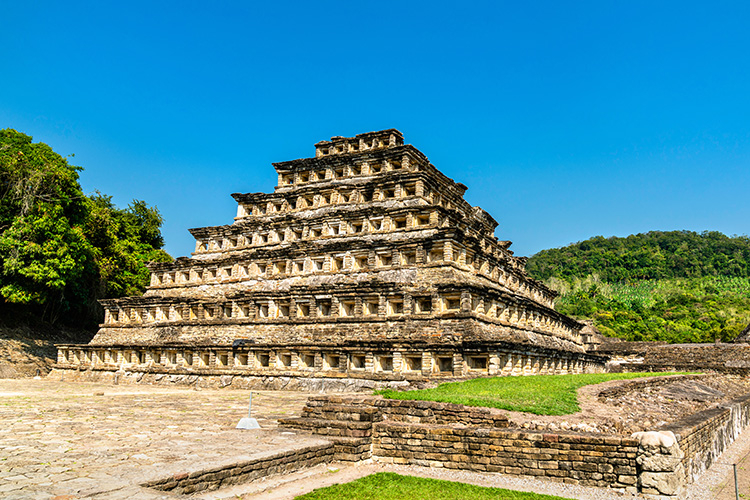 El Tajin in the state of Veracruz in Mexico is an impressive archaeological site which originally formed the capital city of the Totonac state. In fact, the name “Tajin” refers to the Totonac deity of thunder, lighting and rain. Today, it is a UNESCO World Heritage site and is open to the public, although much of it is yet to be excavated.

Much of El Tajin is extremely well-preserved, offering a great many things to see. Amongst the most famous attractions at El Tajin is the Pyramid of the Niches, an impressive six-stepped pyramid which would once have been crowned with a temple. Stone reliefs and friezes around the site offer an insight into the lives of those who lived in El Tajin. 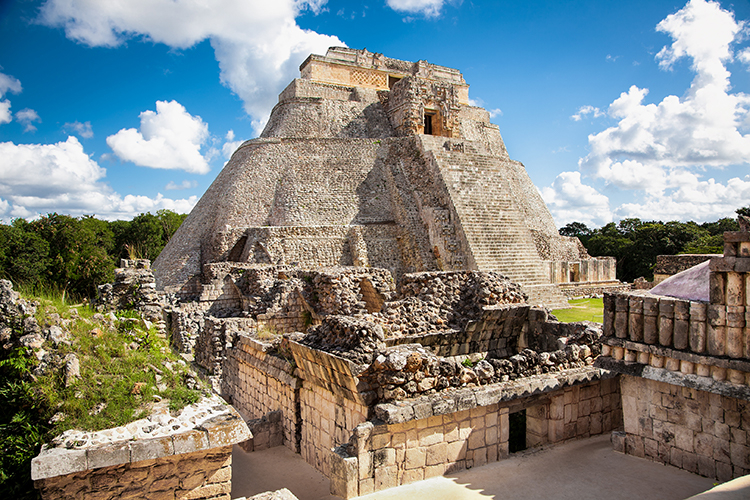 Uxmal is an archaeological site in Mexico which houses the ruins of a Maya town thought to have been inhabited as early as 800BC. Having said this, most of the buildings and structures seen at Uxmal today were constructed in between around 700AD to 1000AD. Like other ancient cities in Mexico, Uxmal has a series of ceremonial pyramids, the most celebrated of which is the Pyramid of the Soothsayer.

Uxmal is now a UNESCO World Heritage site and also has a small museum. Organised tours from Merida can last a whole day and include sites such as Kabah. Audio guides are available in several languages for an added fee. 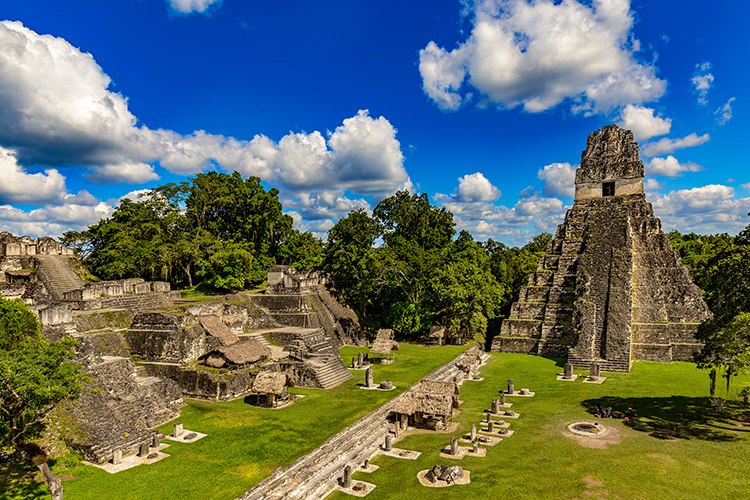 Tikal National Park near Flores in Guatemala houses one of the world’s most famous and impressive Maya sites, known as Tikal. In fact, Tikal was a major ceremonial site in the Maya culture, with many temples and pyramids built there between 300 BC and 100BC and then further expansion taking place from 600 AD to 800 AD.

Today, visitors to Tikal are greeted with a wealth of well-preserved monuments, palaces, structures and temples. This UNESCO World Heritage site actually has a staggering 3,000 or so ancient structures mostly dating back to between 600 BC and 900 AD, six of which are fully uncovered. Amongst these are five magnificent pyramids, some of them being crowned with temples and the largest one being an impressive 213 feet tall. 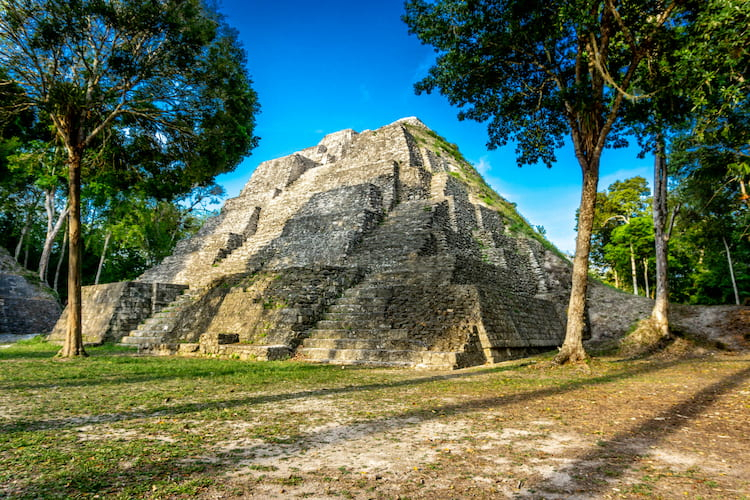 Yaxha in Guatemala’s Peten region is an ancient Maya site containing several incredible pyramids as well as other structures such as ball courts and also carved stelae. From its vast size and its many monuments, it appears that Yaxha was an important settlement for the Maya people, although little is known about its origins.

Yaxha is remote, but all the more magical for it, and it’s definitely worth the effort it takes to get here. Some even find they prefer it to the nearby Tikal. The Acropolis del Norte (North Acropolis) is particularly spectacular, comprising of three pyramidal temples which rise above the jungle canopy. 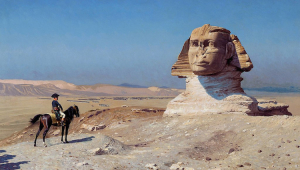 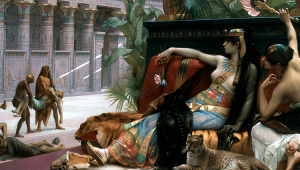 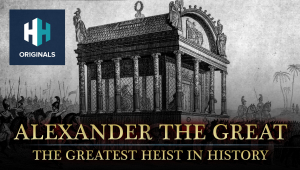 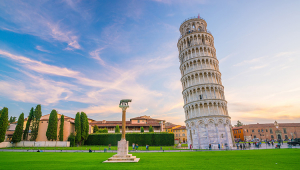 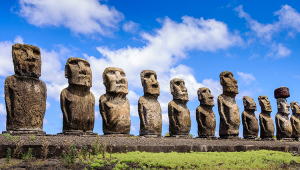 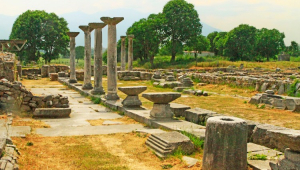 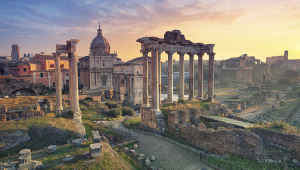 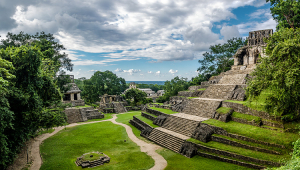