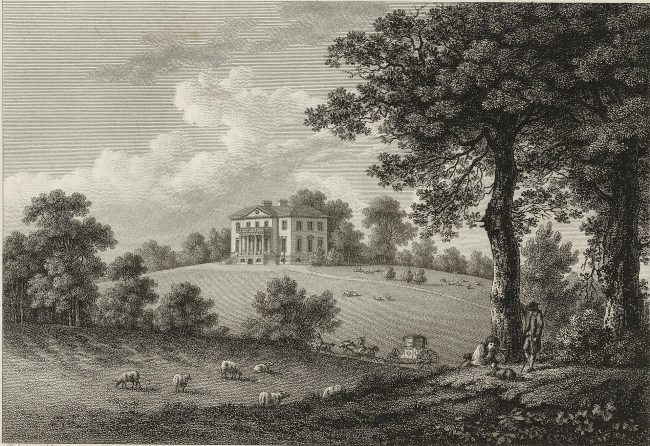 Lancelot ‘Capability’ Brown is one of Britain’s most celebrated landscape architects.

His natural eye for the ‘capabilities’ of an estate would develop a garden style now recognised as the quintessential English landscape.

His work would be praised by Earls, paid for by Dukes and discussed by royalty across the world. Yet the Northumbrian upbringing of the young Lancelot Brown was far from grand.

William, his father, was a yeoman farmer; Ursula, his mother, worked as a chambermaid at Kirkharle Hall. Brown attended the village school in Cambo, along with his five siblings.

After leaving school at 16, Brown kicked off his career as the head gardener’s apprentice at Kirkharle Hall. Flourishing in this world of horticulture, he left the comfort and bucolic safety of his childhood home, and headed south to make a name for himself.

Brown’s big break came in 1741 when he joined Lord Cobham’s gardening staff on the estate at Stowe. He worked under the guidance of William Kent, who had rejected the rigid formality of garden design from Versailles, which asserted man’s dominance over nature.

Kent famously ‘leapt the fence and saw that all nature was a garden’, thus introducing the natural landscape garden which Brown would later perfect.

Brown clearly made a great impression at Stowe, officially appointed as Head Gardener in 1742, a post he held until 1750. Whilst at Stowe he married Bridget Waye, with whom he would have nine children. He also took freelance commissions from Lord Cobham’s aristocratic friends and began to create a name as an independent designer and contractor.

Through word of mouth, Brown’s work soon became the height of fashion for the crème-de-la-crème of British landed families.

Following in Kent’s path of rejecting French formality, Brown sort to embrace and enhance the appearance of the natural landscape to match the romantic visions of painters like Claude Lorrain, whilst providing practically for the needs of a great estate.

He also adopted a number of new techniques in this ‘place-making’. For example, in order to mark boundaries without compromising aesthetics, Brown developed the sunk fence or ‘ha-ha’. Different areas of parkland, whilst being managed and stocked totally differently, could appear as one uninterrupted space – both practical and elegant.

Whilst walking in the grounds of Hampton Court in 1782, Brown pointed at different landscape features and explained his ‘grammatical’ technique to a friend, saying:

‘Now there, I make a comma, and there, where a more decided turn is proper, I make a colon, at another part, where an interruption is desirable to break the view, a parenthesis, now a full stop, and then I begin another subject.’

As an accomplished rider, Brown would take about an hour to survey a new garden or landscape, and rough out an entire design. The ‘great capabilities’ in the estates he saw earnt him the nickname ‘Capability’ Brown.

Contemporaries noted the irony in Brown’s work – his ability to mimic nature was so remarkable that his meticulously crafted landscapes were taken as organic. This was noted in his obituary:

‘where he is the happiest man he will be least remembered, so closely did he copy nature his works will be mistaken’.

By the 1760s, Brown was earning the modern equivalent of £800,000 a year, receiving over £60,000 per commission. In 1764 he was appointed as George III’s Master Gardener at the palaces of Hampton Court, Richmond and St James, and resided in the magnificent Wilderness House.

His work was renowned across Europe, including in the state rooms of Russia. Catherine the Great wrote to Voltaire in 1772:

‘I am presently madly in love with English gardens, with curved lines, gentle slopes, lakes formed from swamps, and archipelagos of solid earth’

Over his lifetime, Brown was associated with around 260 landscapes, including those at Belvoir Castle, Blenheim Palace and Warwick Castle.

However, Brown’s work was not universally admired. The most vocal contemporary critic, Sir Uvedale Price, condemned his landscapes as results of a mechanical formula, reproduced thoughtlessly with little consideration for individual character. The clumps of trees were ‘as like each other as so many puddings turned out of one common mould’.

In modern times, Brown’s reputation has revived. A series of restorations to mark his tercentenary have revealed impressive feats of engineering and sustainable water-management which have adapted impressively to modern demands.

With the popularity of recent ‘Capability’ Brown festivals and conservation initiatives, it seems that Brown will retain his position as a ‘genius’ of landscape architecture.