Why Was Lord Elgin’s Acquisition of the Parthenon Marbles so Controversial? | History Hit 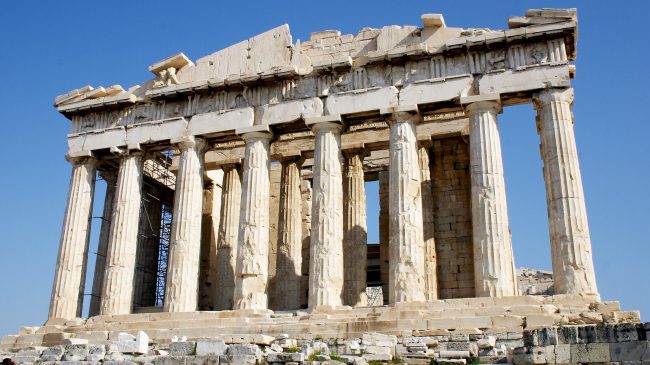 Built as a temple dedicated to the Greek goddess Athena, it was later converted to a church, and finally, as Greece succumbed to Turkish rule in the 15th century, a mosque.

During a Venetian attack in 1687, it was used as a temporary gunpowder store. A huge explosion blew the roof off and destroyed many of the original Greek sculptures. It has existed as a ruin ever since.

In this long and turbulent history, the greatest point of controversy arose at the turn of the 19th century, when Lord Elgin, the British ambassador to the Ottoman Empire, excavated the sculptures from the fallen ruins.

Elgin was a lover of art and antiquities, and deplored the widespread damage inflicted upon important artworks in the temples of Greece.

Although he originally only intended to measure, sketch, and copy the sculptures, between 1799 and 1810, with a group of experts and academics, Elgin began to remove material from the Acropolis.

He gained a firman (a type of royal decree) from the Sultan, claiming it was a diplomatic gesture in gratitude for Britain’s defeat of French forces in Egypt. This gave him permission ‘to take away any pieces of stone with old inscriptions or figures thereon’.

By 1812, Elgin had finally shipped the Parthenon marbles back to Britain at a huge personal cost of £70,000. Intending to use them to decorate his Scottish home, Broomhall House, his plans were cut short when a costly divorce put him out of pocket.

Parliament was hesitant to purchase the marbles. Although their arrival was widely celebrated, many Britons were unimpressed with broken noses and missing limbs, which failed to satisfy a taste for ‘ideal beauty’.

However, as tastes for Greek art grew, a parliamentary committee investigating the acquisition concluded the monuments deserved ‘asylum’ under a ‘free government’, conveniently concluding the British government would fit the bill.

Although Elgin proposed a price of £73,600, the British Government offered £35,000. Facing huge debts, Elgin had no choice but to accept.

The marbles were purchased on behalf of ‘the British nation’ and housed in the British Museum.

Ever since the marbles were brought to Britain, they have incited passionate debate.

Contemporary opposition to Elgin’s acquisition was voiced most famously by Lord Byron, one of the leading figures of the Romantic movement. He labelled Elgin a vandal, lamenting:

‘Dull is the eye that will not weep to see
Thy walls defaced, thy mouldering shrines removed
By British hands, which it had best behoved
To guard those relics ne’er to be restored.’

Yet it is worth bearing in mind that Byron himself had no concept of preservation, believing the Parthenon should slowly melt into the landscape. Like Elgin, Byron himself brought Greek sculpture back to Britain to sell.

In recent times, the debate has resurfaced to become as vociferous as ever, as calls have been made to return the marbles to Athens.

A main issue of contention is whether Elgin’s actions were legal. Although he claimed to have a firman from the Sultan, the existence of such a document is shrouded in mystery, as Elgin was incapable of ever producing it.

Modern researchers have also failed to find the firman, despite many similar documents from this date being meticulously recorded and preserved.

Secondly, museums in Sweden, Germany, America and the Vatican have already returned items originating from the Acropolis. In 1965, the Greek Minister of Culture called for all Greek antiquities to be returned to Greece.

Since then, a state-of-the-art Acropolis Museum was opened in 2009. Empty spaces have been pointedly left, demonstrating Greece’s immediate capability to house and care for the marbles, should they be returned.

But where does one draw the line? To return artefacts and satisfy restoration demands, the world’s greatest museums would be emptied.

Both sides have emphasised careless preservation techniques to downplay rival causes. Many argue that British excavation, transit and preservation of the Elgin marbles have caused more damage than 2,000 years of exposure to natural elements on the Acropolis.

Equally, Greek restoration of the Parthenon is peppered with mistakes. Nikolaos Balanos’ work in the 1920s and 1930s stapled fragments of the Parthenon structure together using iron bars, which have subsequently corroded and expanded causing the marble to splinter and shatter.

Furthermore, had the sculptures remained in Greece, they would have endured the tumult of the Greek War of Independence (1821-1833). During this period, the Parthenon was used as a munitions store, and it seems probable that the remaining marbles would have been destroyed.

It seems likely that Elgin’s acquisition saved the marbles from total destruction, and the British Museum retains its position as the superior museum setting. It claims to provide ‘an international context where cultures can be compared and contrasted across time and place’.

The British Museum has emphasised the legality of Elgin’s actions, reminding us ‘his actions must be judged according to the times he lived in’. In Elgin’s day, the Acropolis was home to an array of Byzantine, medieval and Renaissance remains, which were not part of an archaeological site, but lay amongst a village-garrison which occupied the hill.

Elgin wasn’t the only one to help himself to the Parthenon’s sculptures. It was a common practice by travellers and antiquarians to help themselves to whatever they could find – hence sculptures of the Parthenon have ended up in museums from Copenhagen to Strasbourg.

The local population utilised the site as a convenient quarry, and much of the original stones were reused in local housing or burned to obtain lime for building.

It is unlikely this debate will ever be settled, as both sides have argued convincingly and passionately for their cause. However, it provokes important questions surrounding the role of museums and ownership of cultural heritage.